Banaue Rice Terraces on a Budget

I have an air-tight plan for money management on the road. Two credit cards, two debit cards, all thoroughly vetted for ease of use overseas and stored in separate location so I always have a backup. I track my daily expenses with an iPhone app and each month do a full accounting analysis of my spending and earning to keep on track. I inform myself about the availability of ATMs and am always sure to have enough cash to get me from one place to the other.

Or at least I used to. 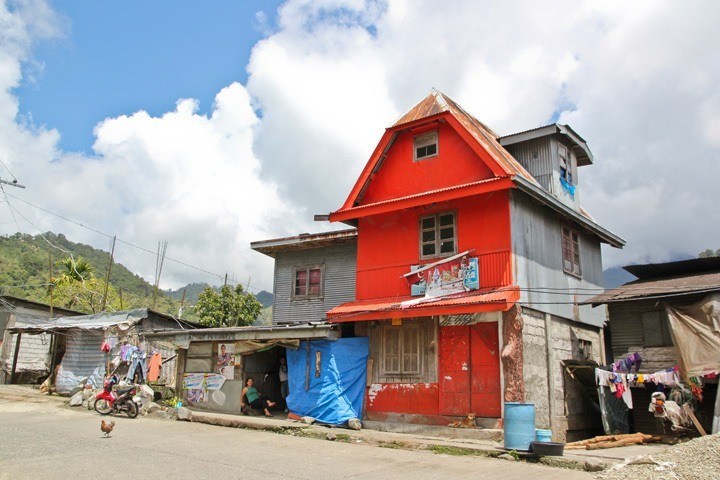 I can think of at least three times in my travels when I listened to distraught travelers come to the realization that they were on a speedboat/bus/ferry to an island/town/beach with no ATM and were severely under-supplied with cash. On each occasion I took the opportunity to feel smugly superior and full of pity for those who clearly hadn’t read their guidebook cover to cover before butting in to the situation to see how I could help.

So imagine my horror when on an overnight bus deep into the heart of The Philippine’s Cordillera mountain range, my seatmate began to discuss the difficulty he had had getting enough cash out of various ATMs in Manila to cover his time in Northern Luzon. Because there were no ATMs in Banaue or Batad, the two towns I was planning on spending the next four days in. After a few moments of getting over the shock of becoming one of the people I used to roll my eyes internally at, and a frantic flip through my guidebook to confirm, I took silent stock of my funds. Earlier in the day I happened to take out 4,000 Philippine Pesos, or around 100 US dollars. After buying some snacks and a taking a taxi to the bus station and buying the overnight bus ticket to Banaue (500 php/12.30 usd), I was left with the equivalent of around $80 dollars. It was going to be an interesting few days. Normally under these circumstances I might find another backpacker, befriend them and explain the situation, and run to an internet cafe to make a transfer to their account in exchange for a loan. I’ve done it for others before. But this was the Philippines — other backpackers and internet cafes were almost as scarce as the fickle ATMs themselves, and so even if I found someone they’d likely be precariously low on cash themselves. It would be good blog fodder born of necessity, I told myself: could I see the Philippine’s world famous, UNESCO-praised rice terraces on the cheap? 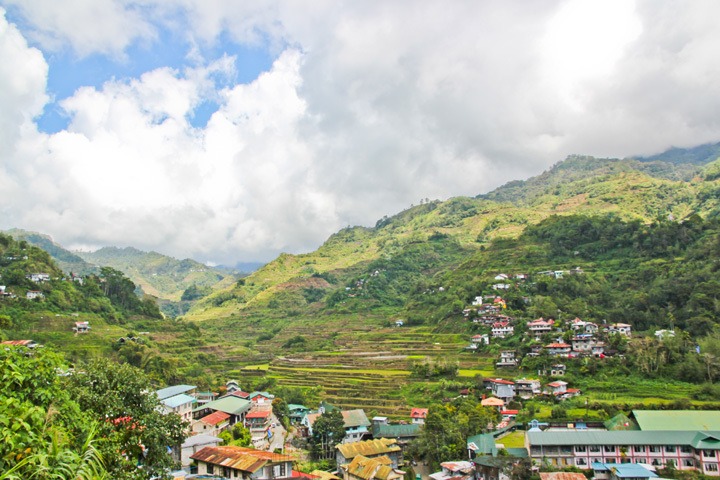 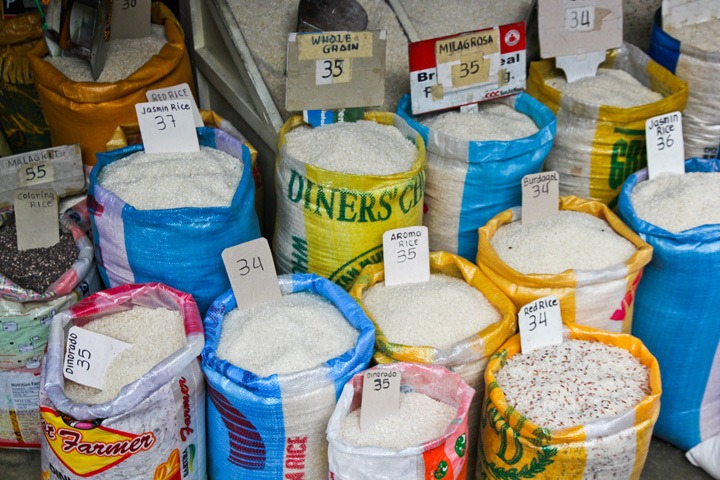 Arriving in the tiny mountain town of Banaue the next morning, I joined forces with that seatmate, the one other backpacker on the bus, who’s travel plans luckily aligned with mine for the next few days. Normally I wouldn’t consider giving up my privacy and a healthy dose of alone time to share a hotel room with a stranger, but desperate times call for extraordinary measures. So we found a room in a clean lodge (250 php/6.15 usd each) and split it. After breakfast (75 php/1.84 usd) we walked the entire length of the town in about ten minutes, and then checked in at the visitor’s center. Here, we gathered information about the journey to our final destination of Batad and our current destination of Banaue, and paid the mandatory environmental fee and bought a map (75 php/1.84 usd) so that we could explore the area relatively independently. Banue is more of a jumping off point than a destination in and of itself — most visitors are there on their way in and out of the idyllic getaway of Batad. But G.I. Joe (the nickname I gave my British military contractor travel companion) and I agreed — there was no way we were taking on that journey straight after an overnight bus ride, so we had a day to explore Banaue. Guides were asking 200 php to drive up to the top of the viewpoint, but our own two feet were free and even with my current delicate money situation aside, I was itching for some exercise. After using the Steripen to prepare a decent amount of water (bottled water was actually quite pricey in the area, making me glad once again for my investment in the Steripen) and grabbing a quick snack from a bakery (just 5 php/.12 usd!) we set off.

It was a decent hike — a windy paved road curving sharply upward the entire 800 meters. I was glad we weren’t being whisked up in a quick ten minute drive. Instead, our stroll gave us a peek into life in the Cordilleras. We passed many small provincial churches, evidence of the vast and devout Christianity that more than 85% of Filipinos identify with. 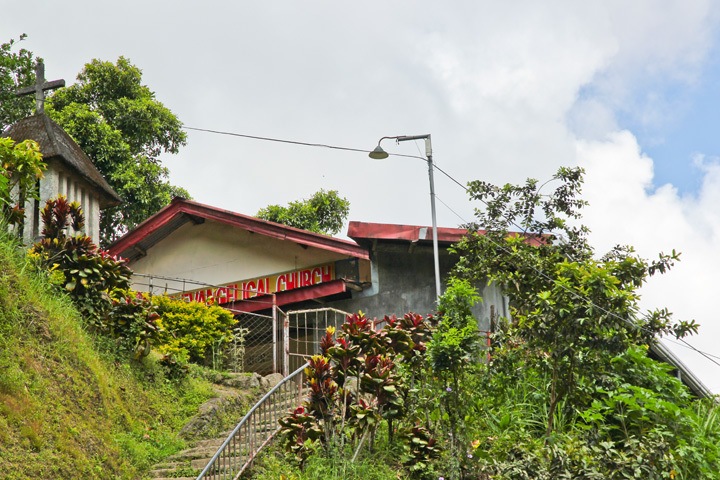 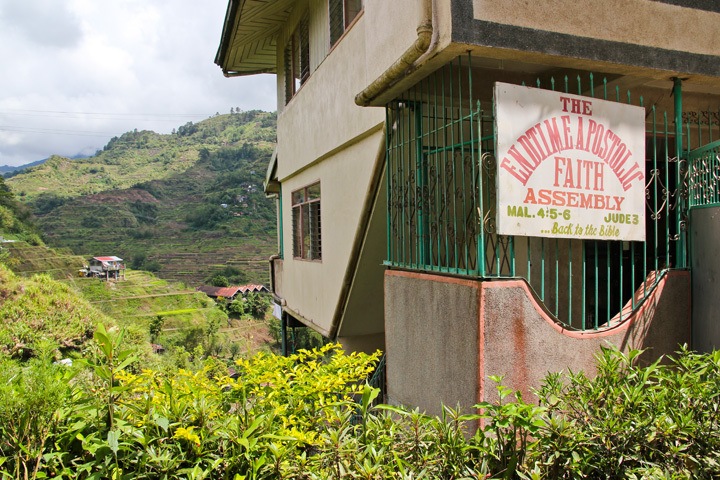 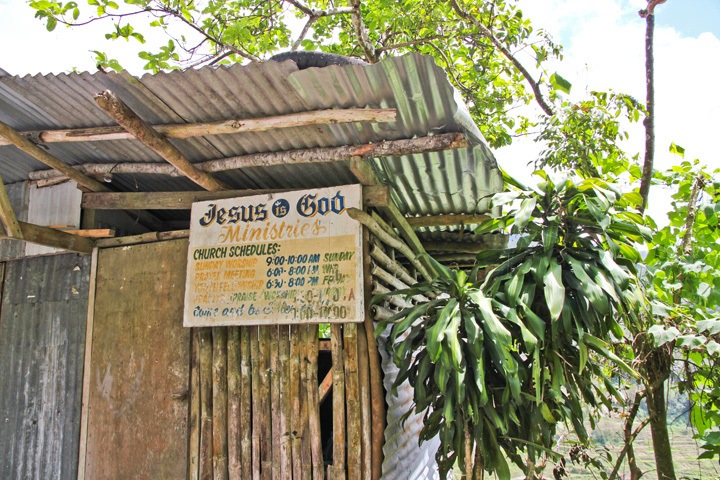 We also met many eager guard dogs, who were the first of many dogs in the Philippines who would absolutely break my heart. It was much worse in other areas, but I first noticed it in Banaue. Dogs tethered on impossibly short chains, wincing with fear whenever humans came near them. I desperately wanted to put each one in my backpack and nurse it back to happiness.

Sadly, like I said, I would soon see that these dogs were actually fairly lucky compared to others. 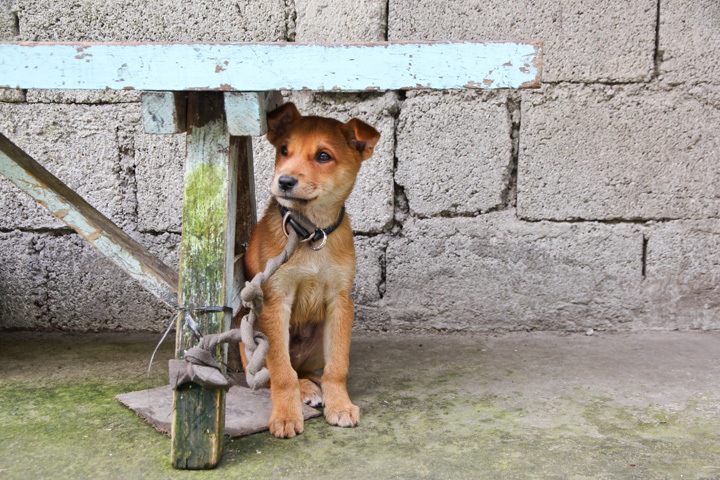 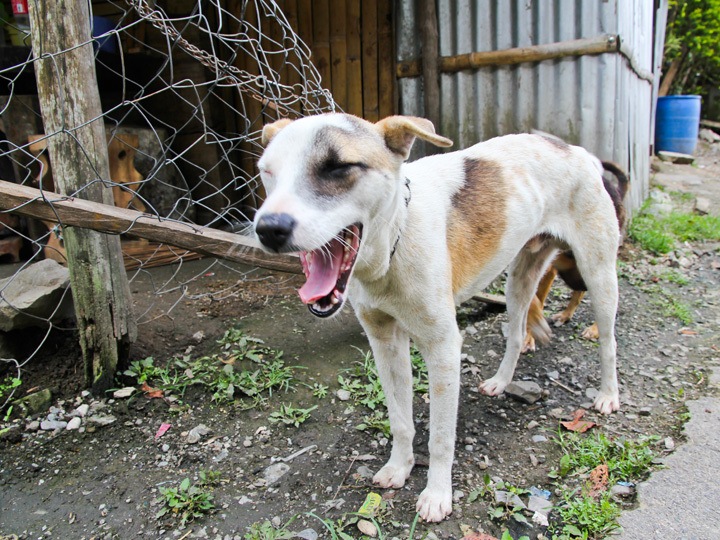 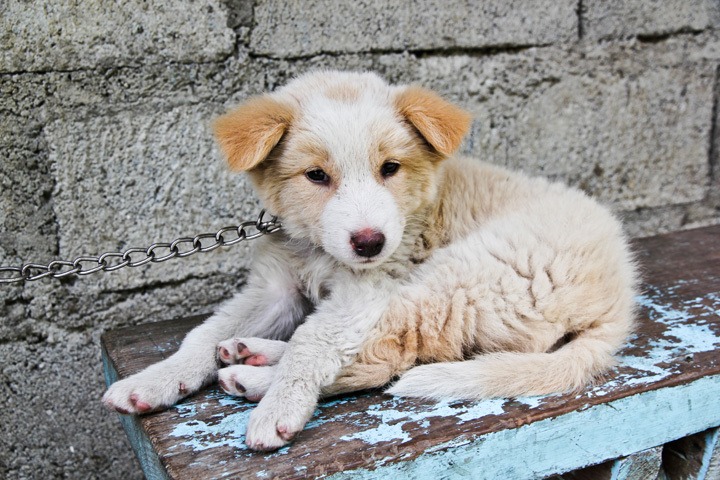 And of course, there were plenty signs of ingenuity that come from being in a place where the nearest Target or Tesco is…. uh, in another country. One that made me smile was the prevalent use of sawed-off tin and plastic containers as planters. 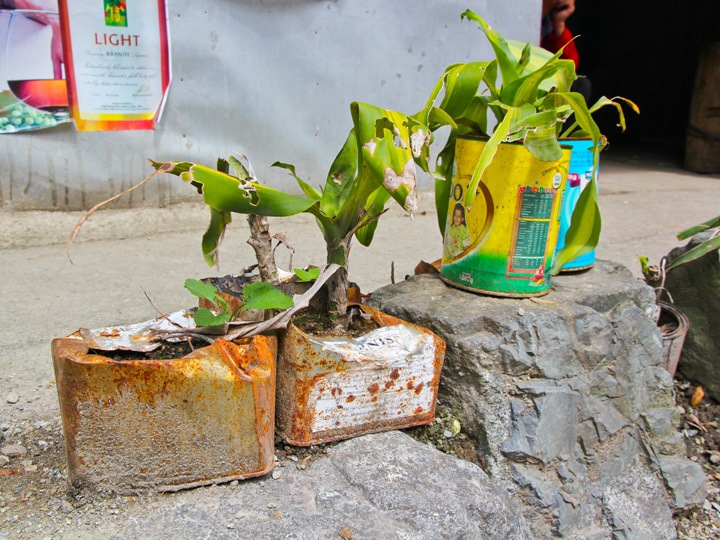 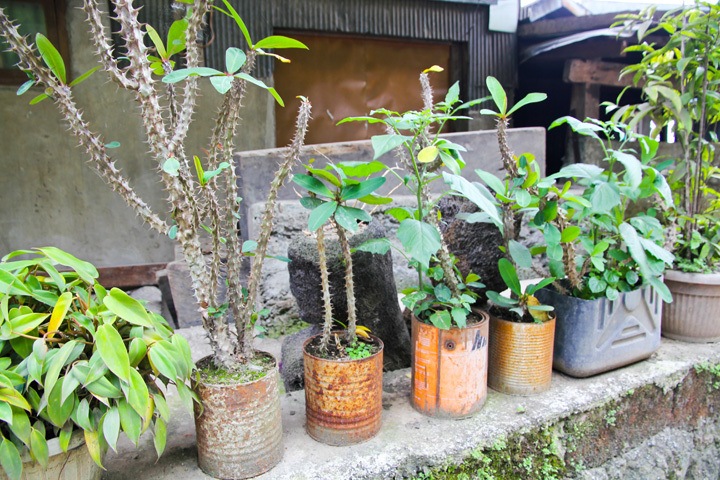 But really? We were there for the rice terraces. Banaue’s rice fields were sculpted more than two thousand years ago, and have retained their (admittedly fairly organic) shape despite being made of mud, rather than stone. These being the first true rice terraces I had ever laid eyes on, I was very impressed. Coming back through Banaue after Batad they seemed a little more “meh,” so I’d recommend following my order.

The various viewpoints became more beautiful as the road climbed higher, and become a more welcome respite as our legs grew tireder. 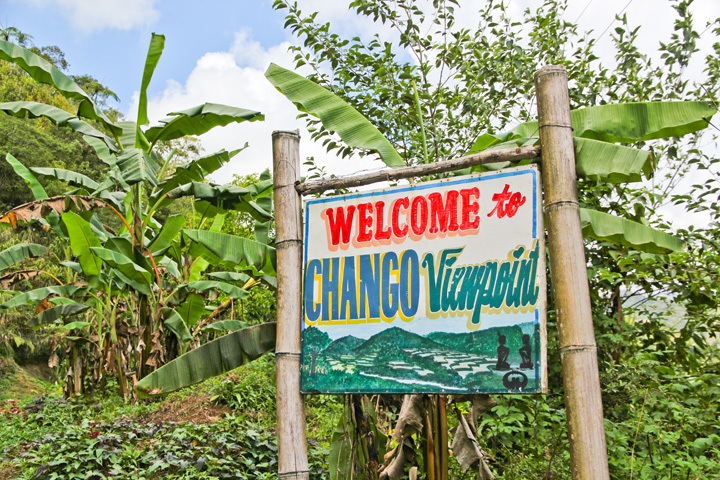 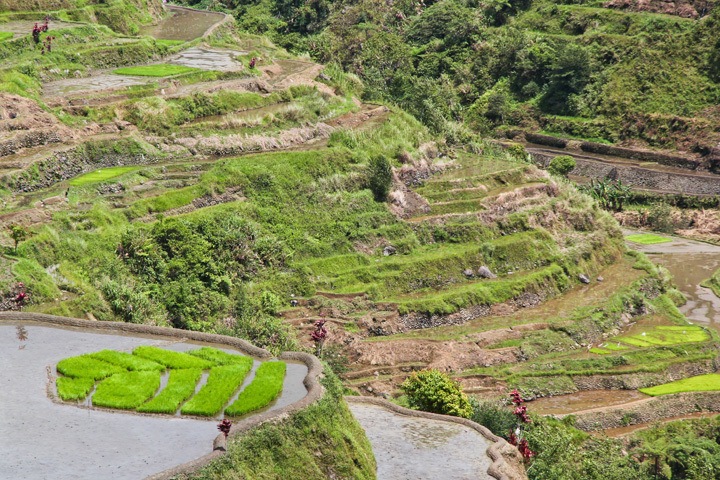 One thing I really loved about Banaue was the locals who sat at the viewpoint in traditional dress, posing for photos for a small fee. I admit that at first this made me feel slightly uncomfortable and some might roll their eyes at how “un-authentic” it was. But with further reflection, I reasoned — what else are elderly people going to do for money in a society built on physical activity (being a tour guide) or manual labor (tending the rice fields)? This provides them with a modest income and helps keep evidence of their traditional culture alive.

Plus, duh, I like taking pictures! Be sure to bring small change if you plan to take portraits along this route — I was pretty unprepared with small bills and went through my change (40 php/.98 usd) pretty quickly. 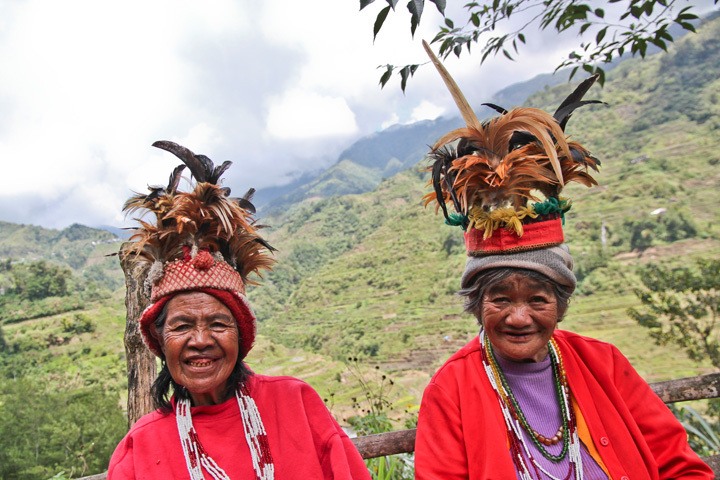 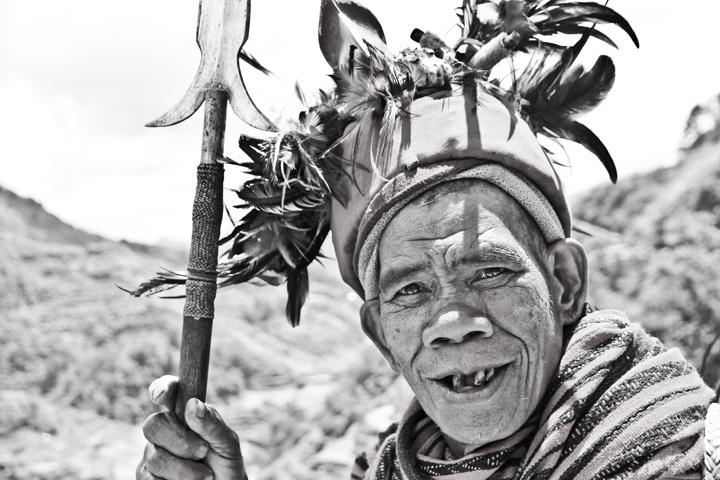 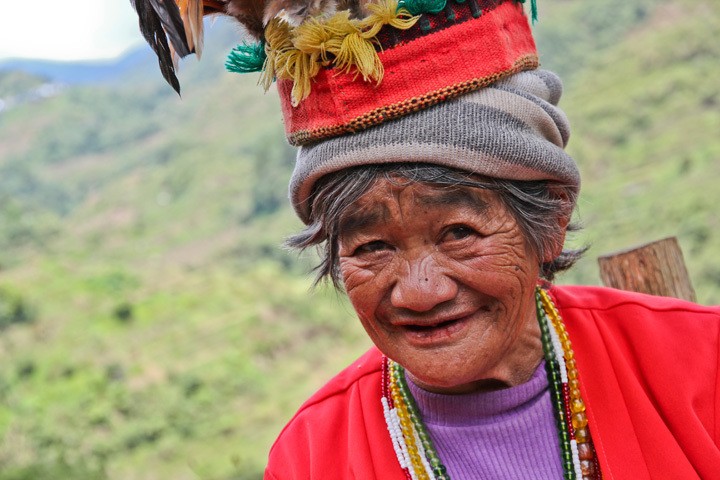 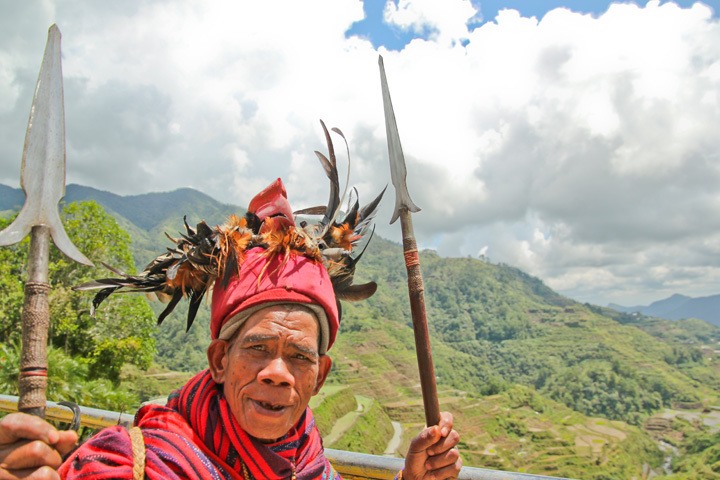 I was quite pleased when we made it to the top, all on our own two feet! The rice terraces were stunning and had me itching with excitement to reach their even more lauded cousins in Batad the next day. 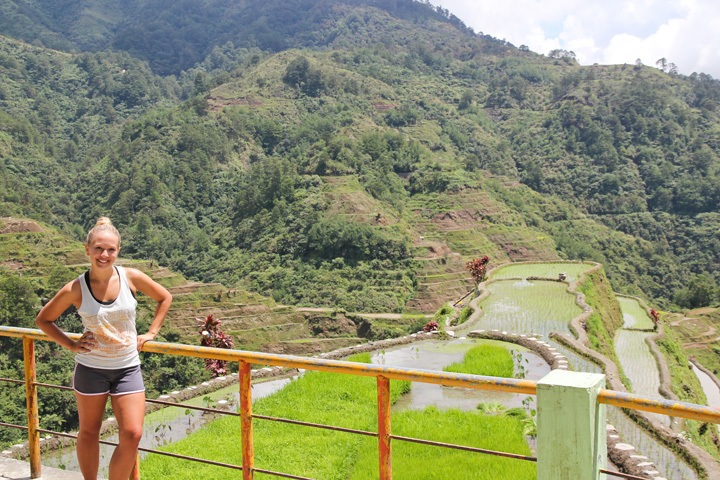 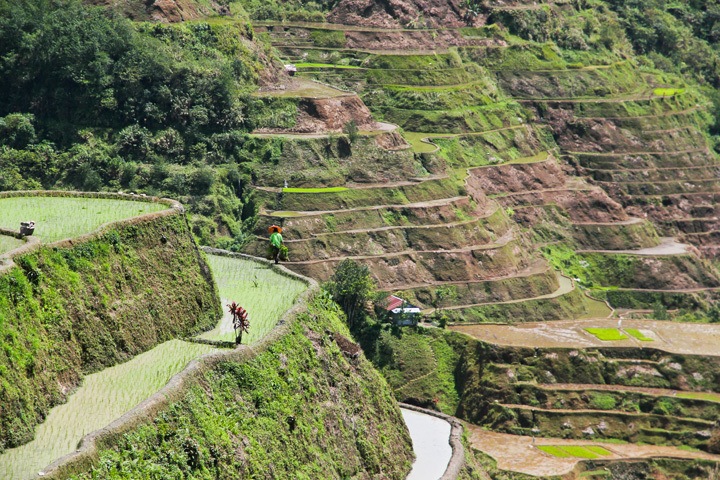 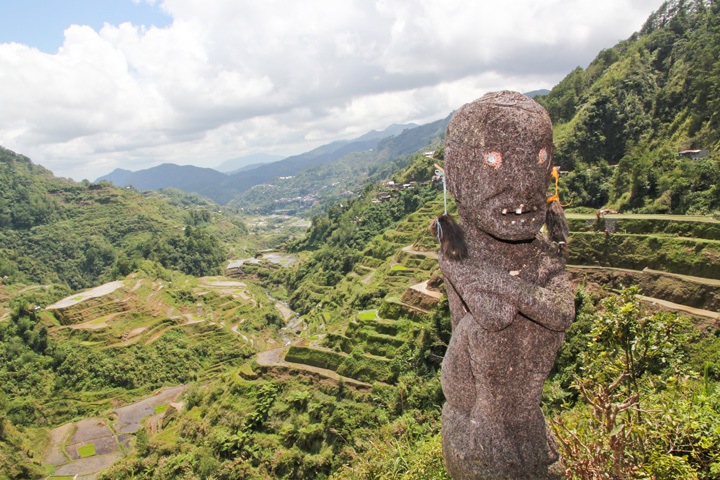 Feeling accomplished and much in need of a nap, we headed back into town. There, I counted my pesos carefully and decided that even after dinner (180 php/4.43 usd) I had enough left over for a small indulgence of a candy bar (60 php/1.48 usd). There was no temptation to spend the money on nightlife, as the entire town is shuttered by nine in the evening — no problem for those of us getting up at dawn to hike into Batad.

I felt pretty proud of my budgeting! It was the end of day one and I had spent a total of 1,185 pesos (around $29 usd), almost half of that being my overnight bus ticket to Banaue. Thanks to splitting a hotel room, making a pastry from the super cheap bakery into lunch, and forgoing a driver for the rice terraces, I was in pretty good shape for my stupidity-imposed budget challenge. 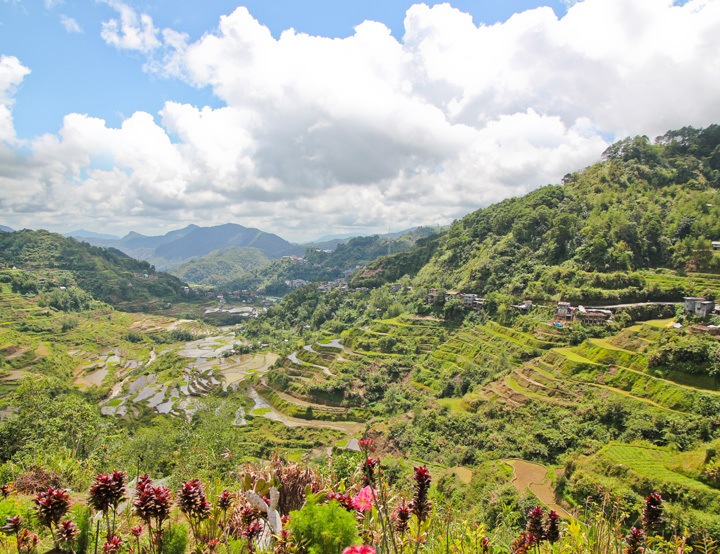 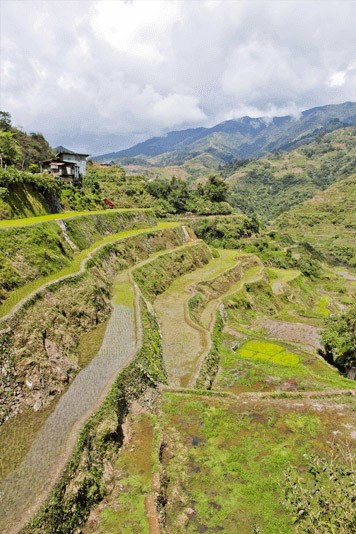 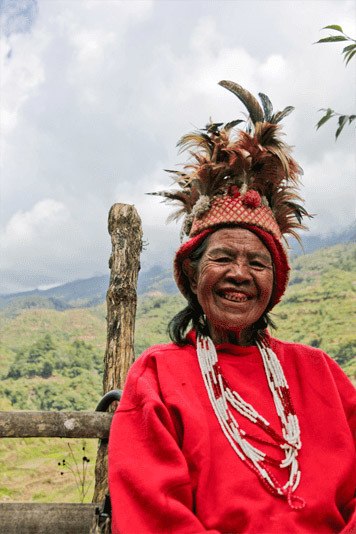 Have you ever found yourself on an unexpected tight budget on the road? How did you handle it?

Warning: I do not recommend the People’s Lodge in Banaue. You will notice that I rarely write negative reviews of a place. This is both because I rarely have experiences negative enough to feel that I need to warn others and because I try to keep a positive attitude. But People’s Lodge left a bad taste in my mouth after my first night there and an even worse one of my return through town after Batad. Rooms were double the price stated in my very recently released guidebook, there was a fee for hot water, there were no electrical outlets in the room meaning all electronics had to be charged at reception, and worst of all the staff was unfriendly and sometimes downright rude. On my final morning they tried to strong-arm me into taking a private driver to Sagada, and when I said that I was taking the public Jeepney they laughed cruelly in my face. Avoid.

I lucked out with this particular destination — not all places are so easy to have a cheap holiday in. Discount booking sites can help you plan intentionally cheap trips — just be sure to check about ATM availability in your intended destination!

Read the Fine Print: My Credit Card Disaster with Citi