Since I left home for my Great Escape, I’ve been doing monthly roundups of my adventures filled with anecdotes, private little moments, and thoughts that are found nowhere else on this blog. As this site is not just a resource for other travelers but also my own personal travel diary, I like to take some time to reflect on not just what I did, but how I felt. You can read my previous roundups here: Month 1, Month 2, Months 3 and 4, Month 5, Month 6, Month 7, Months 8 and 9, Month 10, Month 11, Month 12, Month 13, Months 14 and 15, Month 16, and Months 17 and 18, and Month 19. 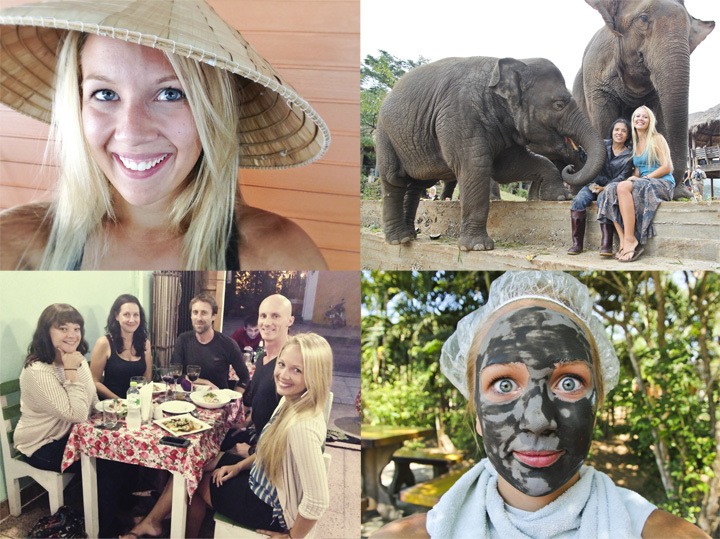 If last month was all about readjusting back to life out of a backpack, this month was about embracing it. I broke my usual beach-hopping pattern to explore Northern Thailand more thoroughly after only giving the briefest of glances in the past. I was all over the place not just in terms of destinations both new and old but also in terms of travel style: I went from solo travel to traveling with a guy to kicking around with friends, and switched between budget backpacking and splashing out for quick fixes of luxury.

Throughout it all, I cemented my love for both the act of long-term travel and also for Thailand, the country I just can’t seem to quit.

• I’ve been pretty transparent about not really loving Chiang Mai — so how did I end up spending ten whole days there on this trip? One word: people. I settled right into an amazing group of insta-friends including Diana, Lindsay, Matt, Torre and Ivan. Our dinners and nights out broke up an otherwise somewhat monotonous period of work and made it quite difficult to tear myself away.

• It’s pretty easy to get jaded about travel experiences after almost two years on the road. But anyone who could spend a day feeding, bathing, and hanging out with elephants and not be awed has their wow-o-meter broken. A particularly special moment for me in this day was sponsoring one of the park’s dogs and naming him after my first pup, Westley.

• After years of being a Thai massage devotee, I loved getting to see behind-the-scenes with my one day Thai massage course! And let’s be honest: half the course consisted of just getting a massage.

• Every moment of Pai was a highlight! I fell so hard for this little hippie mountain town, which I now count among my top three favorite destinations in Thailand (sharing the thin air with Bangkok and Koh Tao!) I truly look forward to spending at least a month here in the future, training at the Muay Thai gym, hanging by the river, eating delicious food and soaking up the laid back atmosphere.

• Two days rafting through the remote Thai jungle was not what I had originally expected — I came for a white-water, white-knuckle ride and ended up with a reflective and quiet two-day float. Not to pull anything patting myself on the back here, but I really was proud of the way I turned my attitude around to enjoy a trip that was not at all what I had anticipated. I ended up loving my contemplative, peaceful trip.

• Mae Hong Son is a tiny town, explorable in a day or two. None of the sights are making Thailand Top Ten lists, and yet I’ve been dreaming of visiting there for years. I absolutely loved it — sometimes it just feels good to have a dream realized, no matter how simple, right?

• After doing a big Northern Thailand loop from Chiang Rai to Chiang Mai to Pai to Mae Hong Son and back to Pai, I stopped over for one final weekend in Chiang Mai. It was two nights of indulgence — meeting up for a final dinner and night out with friends, cashing in some Starpoints at the luxe Le Meridian Chiang Mai, and taking an absolutely excellent cooking class! I loved seeing what went into my favorite dishes and can’t wait to get home and butcher them in an attempt to share what I learned with friends back home. Highlight of the highlight: eating mango sticky rice that I made with my own hands.

• Ever since I visited Ayutthaya last year I was itching to visit the twin tourism city of Sukhothai and find out for myself where I came down on the rivalry between them. In the end I’m Team Ayuthaya, but I had a quiet moment in front of Wat Si Chum that almost changed my mind. There I sat before one of the most humbling and beautiful temples I’ve ever knelt before, and I had it to myself for a full ten minutes between descending groups of tourists. It was bliss.

• I always love my time in Bangkok. I never seem to purposely plan in much time there, but it’s hard to drag me away in less than a week. This time I spent a few days in Silom working on a design hostel story and checking out the Bangkok version of Eve Ensler’s One Billion Rising, then headed to Sukhumvit to stay with my friend Wes, visit with friends Neil and Scotty, and pop over to the Talad Rot Fai weekend market. I even got to squeeze in a girl’s night on Soi 11 with Diana and Lindsay! This city just feels like home.

• Ya’ll know I love Koh Tao — what else is new? On this particular trip I really enjoyed trying out something new — trapezing! It was such a rush and I loved discovering something new on my favorite rock in the sea.

• After my New Year’s Eve Full Moon Party last year, part of me wanted to call it quits on them forever. I had had such a good time I wanted to end my moon-partying on a high note and never try to top it. I’m glad I didn’t stick with that! Heading to the February Full Moon Party with Lindsay, MM and a huge crew from Roctopus Dive was one of the most hedonistic and purely fun moves of the month. 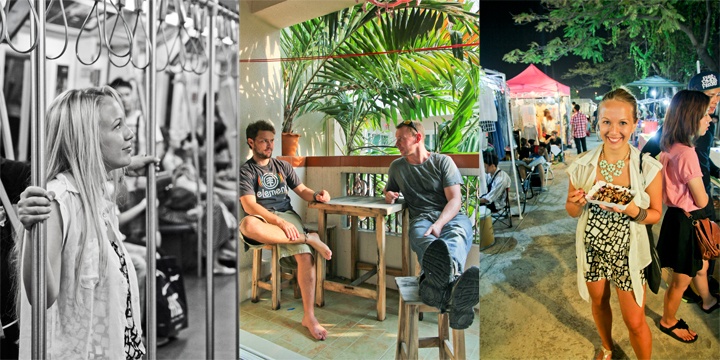 • Food poisoning — talk about a travel lowlight. In Mae Hong Son, both MM and I spent a miserable night wretching, squirming, and in my case, weeping self-indulgently. Worst of all, we had a tight schedule and had to get back to Chiang Mai rather quickly, which meant subjecting ourselves to windy, long mini-bus rides with no air-conditioning. It was painful, to say the least.

• Two of the things I was most looking forward to about exploring Northern Thailand were the Pai Reggae Festival and driving the Mae Hong Son loop by motorbike. The former was inexplicably never scheduled for this year and the latter was scraped when I finally accepted that I wasn’t an experienced enough driver to comfortably take it on. I admit, I was disappointed by both.

• Its not the worst thing that ever happened, but somehow due to a variety of circumstances I managed to miss out on the Chinese New Year celebrations in pretty much every city I was in for the entire holiday. I hate missed opportunities.

• I spent three days of my time in Bangkok in basically a walking anxiety attack, paralyzed by indecision. I knew that I was not ready to move on from Thailand, but yet I had to follow the plan(!) which said I was meant to be in the Philippines. In the end, I followed my heart rather than my head, and it was the right decision to make. But those few days of back and forth were torture.

• After working a bit too much last month and feeling like I was missing out on traveling, this time I swung the other way and had a bit too much fun! My income took a slight hit but in the end it was a trade I was willing to make for all the fantastic experiences I had. 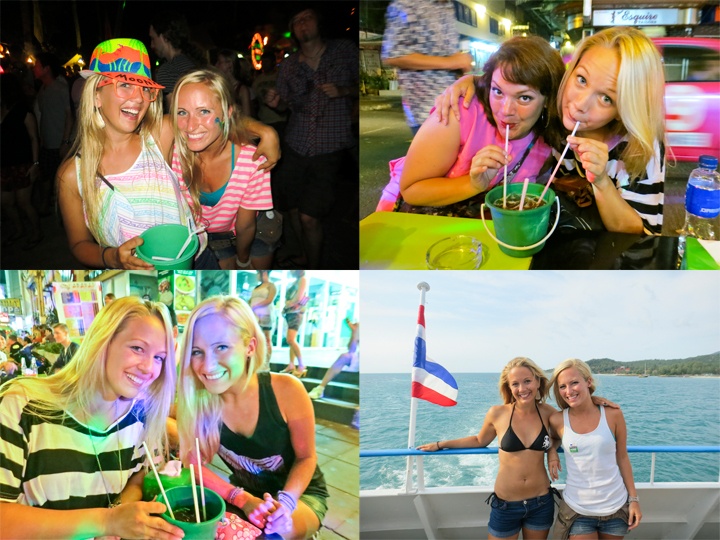 Considering the amount of hopping around I did in this month, I was quite pleased with my budget. Between traveling with someone and splitting expenses, traveling through cheaper areas (Northern Thailand is generally much less pricey than islands), and barely spending a penny on accommodation (staying with friends and doing work assignments), this was one of my cheapest months of travel ever.

While I was nowhere near as vigilant as I was in Month 19, I did a respectable job keeping up my workout routine this month. In Chiang Mai I did yoga and once even went for a four mile run around the perimeter of the city moat (believe me, in Thailand heat, this is a mission!) In Pai I went to Muay Thai training and on my luxury weekend at the Le Meridian I used the hotel gym both days. Back on Koh Tao I went back to my usual routine of hitting the gym and going to Muay Thai training, but mixed things up with trapezing and a hike! 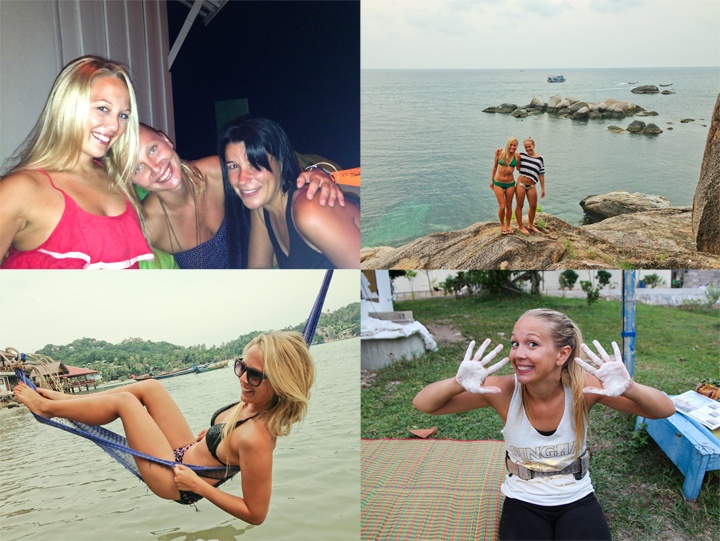 After one more week in Thailand, I’d head straight to the Philippines for three weeks of exploring a whole new country. Stay tuned!

Readers, as usual — it wouldn’t be the same without you. I can’t thank you enough for coming along for the ride!

Beyond the City: A Manila Day Tour Banaue Rice Terraces on a Budget
19 Comments...