Normally, I simply wouldn’t be one to question the wisdom of the 90’s American pop sensation TLC. No waterfall chasing — got it. No scrubs, didn’t want to work in the surgical field anyway — done.* But when I arrived in beautiful Baños, I knew I’d have to do some rule breaking. There were some waterfalls that needed to be attended to. 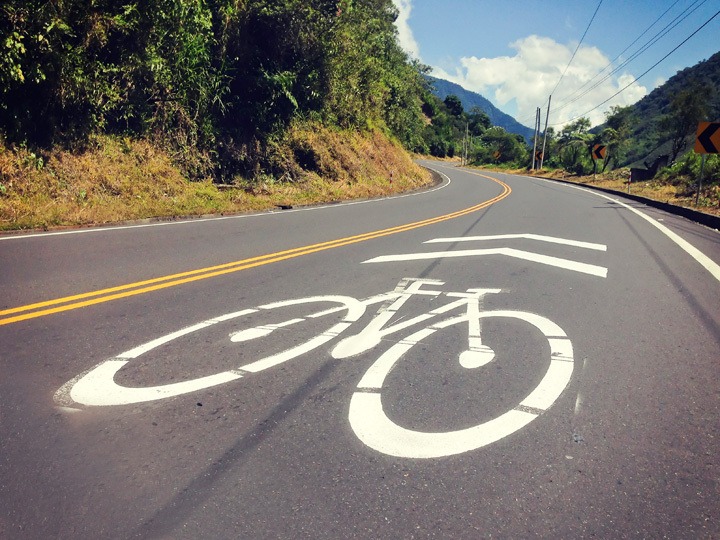 The Waterfall Route, or the Ruta de las Cascadas, is a must-do in the adventure capital of Ecuador. The 10 mile, primarily downhill route takes in almost a dozen waterfalls and almost as many ziplines, cable cars, and other canyon-side attractions. After handing over $7 each for rental bikes, we set off. Despite the fact that I post frequently about biking in my travels, I am actually a fairly nervous rider and I had a hard time relaxing and enjoying the scenery with huge trucks passing me on hairpin turns. Things did ease up a bit as we went on, but it seems the holiday road rush the bike rental company had warned us about was real. I know what you’re all thinking now, right? Hello, TLC wrote that song for a reason! 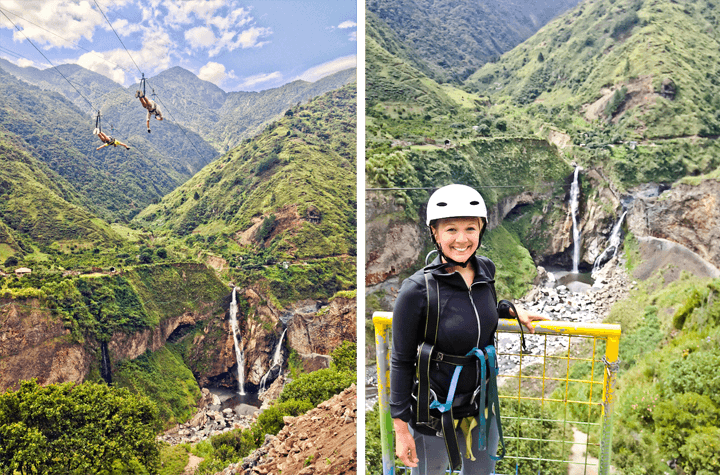 By the time we reached Cascada Agoya, I would have done anything to get off the bike for a bit — including the craziest zipline I’ve ever seen. At $15, what did I have to lose? (Answer: um, my life.) Okay, perhaps that is a tad dramatic, but I couldn’t help but wonder about the safety standards of the family-run ziplines that show up every ten minutes or so along the Ruta de Las Cascadas. 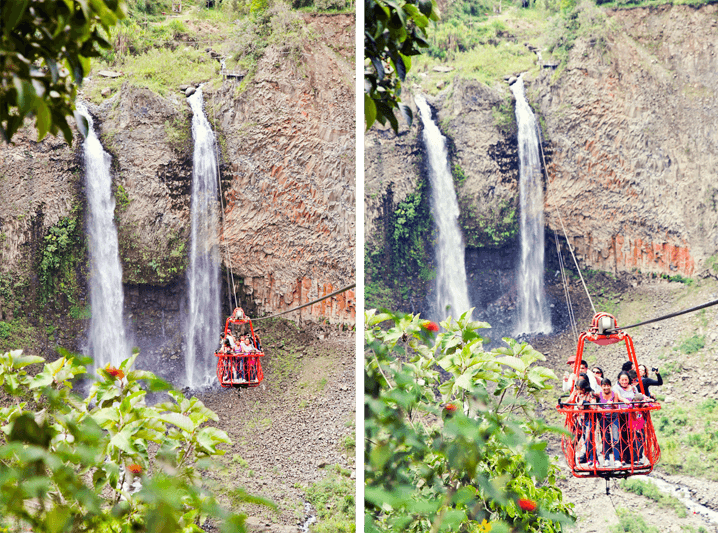 Our next stop was at Manto de la Novia, where we payed a mere $1.50 for yet another aquatic thrill. I thought the cable car would be a breeze compared to the zipline we’d just tackled, but in reality it was equally as exciting. The jam-packed cherry-red car jerked and lurched unpredictably, leaving us squealing and laughing every time it started back up again. The bird’s eye view was so amazing, and the ride so giggle-inducing, I was almost tempted to do it twice. 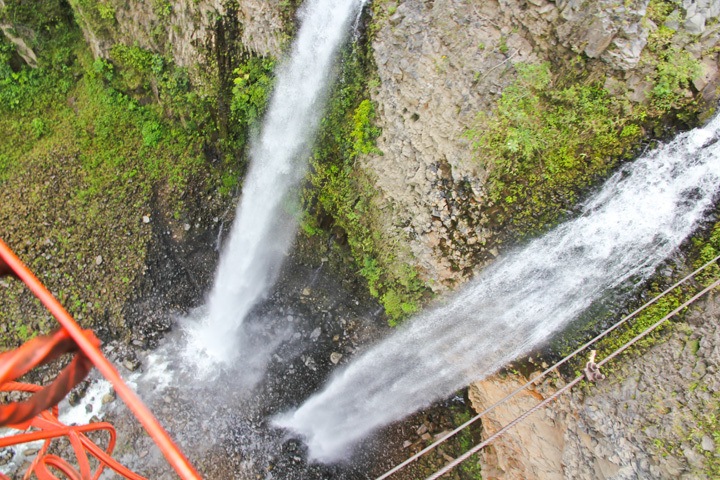 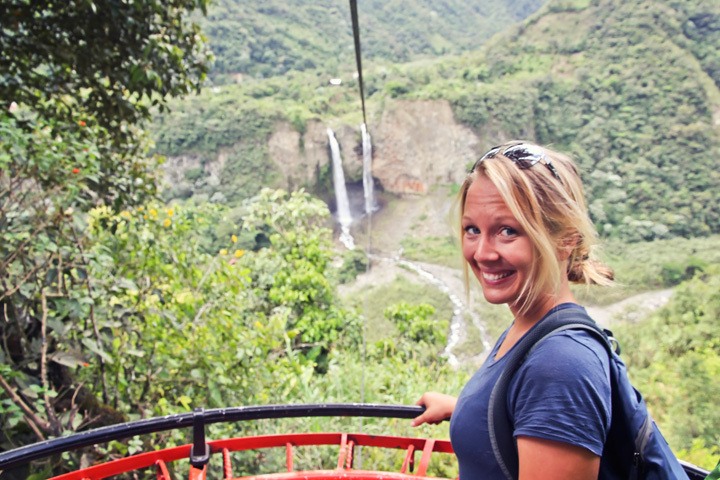 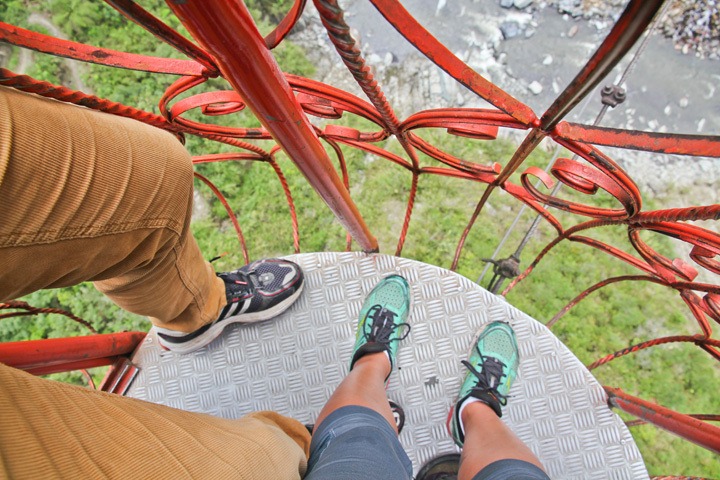 Finally I was feeling a bit more comfortable on the bike and by the time we reached the Rio Verde. It was warm enough that I was tempted to join the local families cooling off in the river, but my lack of bathing suit left me merely admiring the beautiful views. 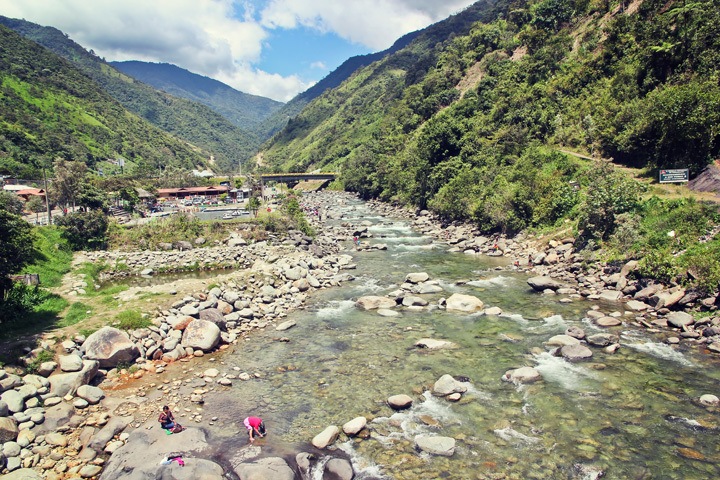 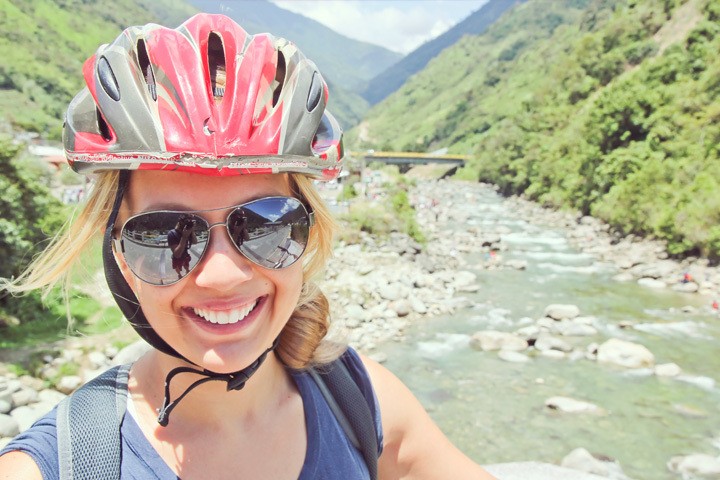 All too soon, we reached our final destination — Pailon del Diablo, a waterfall named after the devil’s cauldron. The walk to and from the falls was actually more strenuous than any of the biking we’d done all day, but the payoff was huge. Our reward? A perfect, beautiful rainbow shining up at us while the mighty falls bellowed behind our backs, water tickling our necks. 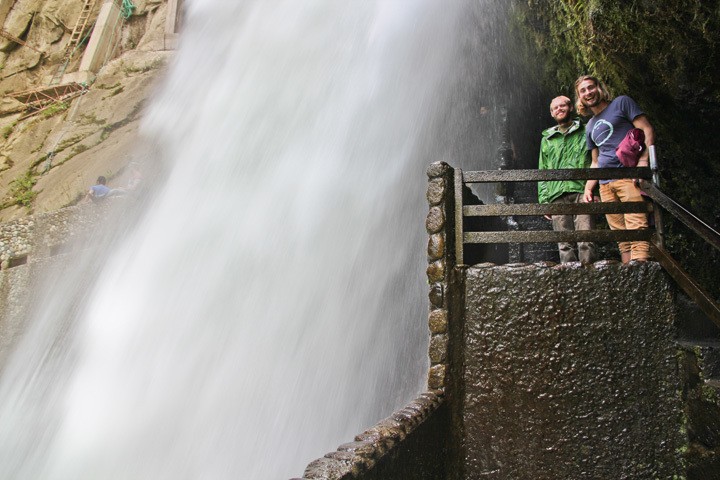 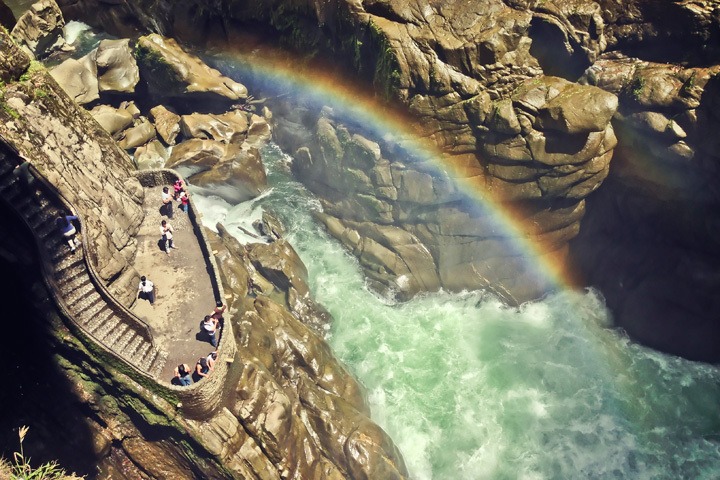 As we loaded our bikes into one of the many pickup trucks waiting to bring bikers back uphill to Baños, I couldn’t wipe off my smile. A day of adventure and beauty — and all at a budget. What does a day like this total:

TLC, I love you guys. But I’m going to have to assume that when you wrote that epic ballad Don’t Go Chasing Waterfalls, you meant to add in a small disclaimer — unless you’re in Baños, Ecuador. Because in that case, you really, really should.

Have you ever been waterfall chasing?

* If you don’t understand all these references, you have clearly not devoted enough hours of your life to watching VH1 music videos. Don’t worry — it’s never too late to start developing effective time-wasting skills!

Saying Ciao to Ecuador in Cuenca

Read the Fine Print: My Credit Card Disaster with Citi Ask Me Anything
40 Comments...