Read the Fine Print: My Credit Card Disaster with Citi

Update: I finally received my points! See bottom of post for details.

When I signed up for the CitiBank Aadvantage credit card, I looked forward to writing a glowing report of how I earned a free flight across the world via an amazing promotion. Instead, I’m writing about a credit card company taking advantage of its customers — specifically, how Citibank screwed me out of 30,000 Aadvantage miles using deceptive and sneaky tactics.

In late August, I opened an AAdantage Citi Credit Card online after receiving an offer in the mail to earn 30,000 Aadvantage points after spending $1,000 in three months. I blogged about the fact that I had signed up for this promotion here.

While it has been good to me I am cancelling my SPG AMEX since the redemption values aren’t as good in South America as they are in Southeast Asia and the first annual fee is coming up. I’m replacing it with Citibank’s American Airlines card, for which I will earn a 30,000 mile signup bonus after I meet the mere $1,000 spend minimum. It does have a foreign transaction fee so it will be my backup card and I plan to meet the spend minimum with US-based, pre-trip purchases.

In order to ensure I’d meet the spend minimum within the specified three month time frame, I carefully planned my enrollment to coincide with some major pre-travel purchases I had coming up. As a self-employed young twenty something, my resources are limited and I plan my spending extremely carefully — it isn’t every day I have a grand available to throw into a new credit card promotion. I fastidiously monitored the account and cheered when I reached the $1,000 mark on September 25th. I had big plans for those points — a one way flight from NYC to Bangkok can be had for just 35,000 and I intended to use the bonus just for that. Considering that itinerary can rarely be found for less than $650 per ticket, I though this was going to be a big win for me. 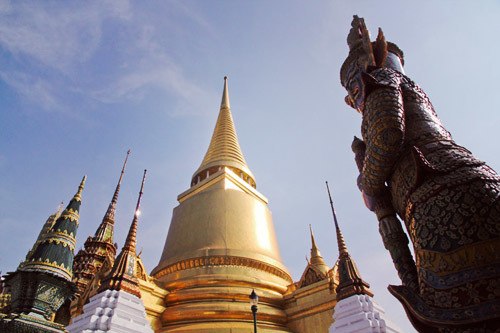 I thought this card would bring me back here

In December, I logged into my AA account to start planning my 2014 travel and realized the bonus points were nowhere to be found. When I called Citi to see what was going on, I assumed it was a minor clerical error and things would soon be cleared up.

Citibank claimed that I had signed up for a different promotion, one that had a $3,000 spend minimum and yielded 50,000 reward points. Forgive me for being frank — this is total bullshit. This is not the offer I received, this is not the offer advertised all over the internet, and this is not an offer I would have accepted regardless — I never would have signed on for a card with such a high spend minimum, as I wouldn’t have been able to meet it in the allocated three month period.

As a matter of fact, I can’t even find the offer Citibank claims I signed up for. There are mentions of it on frequent flyer forums and blogs, but it doesn’t even show up when you look at Citibank’s own list of Aadvantage card offers. 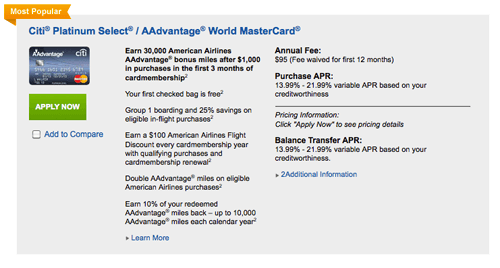 For two months I gave Citibank every chance to show that this was an honest mistake by honoring the promotion that I know I signed up for. I sent them posts I had written about the offer, I sent screenshots of the offer in blogs I regularly read and comment on, and I spent hours hunched over my laptop Skyping with members of various departments. But there was one piece of what they claim was critical evidence which I couldn’t produce — the physical offer I received in the mail back in July. Not only was I not in my hometown to go rooting through my records, I know it wouldn’t have been there regardless — it never would have occurred to me to save a mailed credit card offer. Because of this, Citibank denied my appeal, a verdict they reached last week.

I am devastated. This incident has cost me 30,000 Aadvantage miles, hours of my life spent on hold, and the rewards I could have earned applying that $1,000 to my other credit card (which, by the way, I salute and endorse). Not to mention, even if I wanted to attempt this promotion again, I can’t — these offers are open only to first time card holders.

One area where I have to give Citibank credit is their social media team. They were responsive and compassionate and I truly believe they did everything they could to help me — and I believe they did that because they knew I was right. They offered me $100 credit and 5,000 Aadvantage miles in compensation. As my dad would say, it’s better than a poke in the eye with a sharp stick — but it doesn’t come close to making up for the mistake Citibank made and refuses to correct.

As always, I am trying to learn from this. There is a stereotype that credit card companies exist to prey on and take advantage of their customers. Thus far, my experiences with Capital One and AMEX have been positive, and perhaps that made me naive. Recently, I have spoken to several others who went through this exact same battle with their credit card companies over misapplied promotions! From now forward, I will take massive precautions when applying for a new rewards card, and I encourage you to protect yourself by doing the same:

• File and keep all credit card offer received by mail.
• Document all credit card offers you receive with date-stamped photos and screenshots.
• After enrolling and before making your first purchase, call your credit card company and confirm your rewards offer — record this phone call.
• Once you meet the minimum, ask how long it will take for your points or other rewards to appear in your account and start monitoring the account around that time to ensure everything went smoothly.

Shame on Citibank for not honoring the promotion I signed up for — one that is still being heavily promoted. In the end, I think Citibank is the real loser here. When I find a brand I love, I’m a devoted and enthusiastic customer — and they lost the chance to have me as one. I’m sharing my story in the hopes that no one else wastes their time and hard-earned money like I did, so I’d appreciate if you help me spread the word by tagging @citi. Citibank has already handed down my verdict, and there is nothing I can do to appeal further. But I can try to protect others from similar deceptive business practices.

And now, if you’ll excuse me, I have a credit card to cancel.

Update: Thanks to a comment I received on this post in late May, I filed a complaint against Citibank with the Consumer Financial Protection Bureau. As three months had passed since I gave up on the ordeal I had zero expectations but still wanted Citibank held responsible and considering the evidence I had compiled for this post, putting together a case was easy. The first week of June, I received news that Citibank had decided to honor the promotion I signed up for and my points were on their way! I didn’t quite believe it until I saw them show up in my account six weeks later. I’m so grateful to the CFPB for looking out for the little guy (me!) and highly recommend that others who encounter this issue reach out to them as soon as possible.

So, How Do You Afford This?

Into the Canyons in Baños DO Go Chasing Waterfalls in Baños
98 Comments...