International music festivals don’t come cheap. But exactly how many dollars do you have to drop to attend Tomorrowland? The answer varies wildly — I’ve met festival goers who get by on the cheap by pitching their own tent, bringing in food and generally being frugal, and I’ve met straight up party people who drop what I spent the entire weekend on bottle service in the VIP tent for a night.

This is my personal real for real breakdown of what I spent at Tomorrowland Brasil, as someone who I think stacks up somewhere in the middle. Flight costs are not included, though read this post if you’re wondering how to score a bargain one. 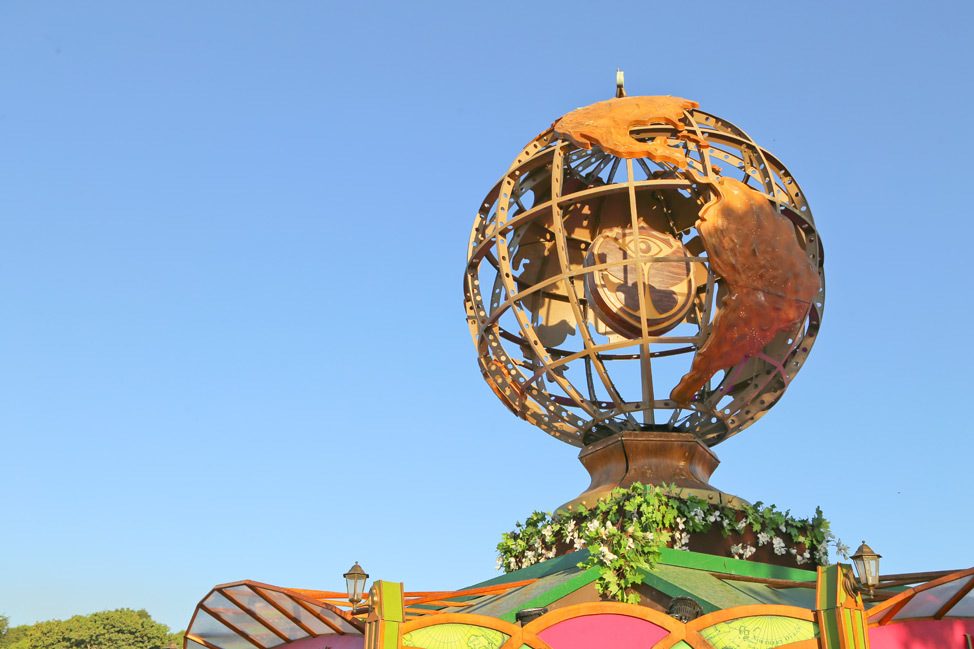 This was a significant increase over the $300 we paid for our tickets in Belgium. At Tomorrowland Brasil, a Full Madness Pass covering all three days of the festival was $419. Comfort VIP passes, which provide access to a separate viewing deck with bottle service and free snacks occasionally passed around, were $889.

Day passes were also available for $189, or $379 for the upgraded comfort VIP version. All tickets and Dreamville packages were listed and sold in USD currency. 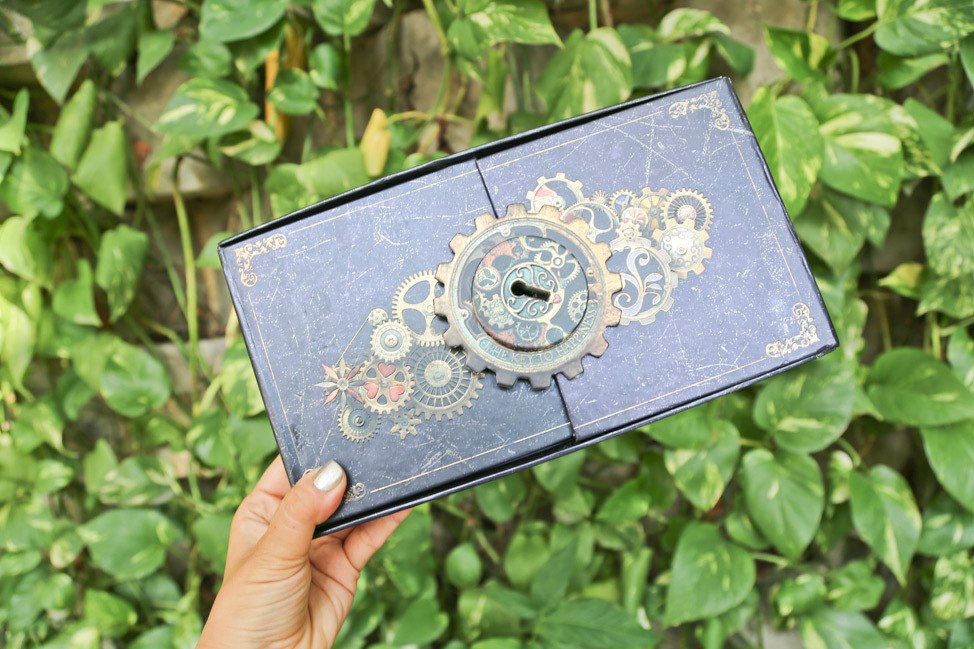 Again, this was a big price bump over the $661 we each spent in Belgium, and unfortunately I can’t rave that it was money well spent. This included four nights of glamping in the Dream Lodge village. If I had been able to look into the future and act accordingly, I would have gone for the Spectacular Easy Tents instead and saved myself a cool $705 in the process.

Next up, read all about camping in Dreamville! 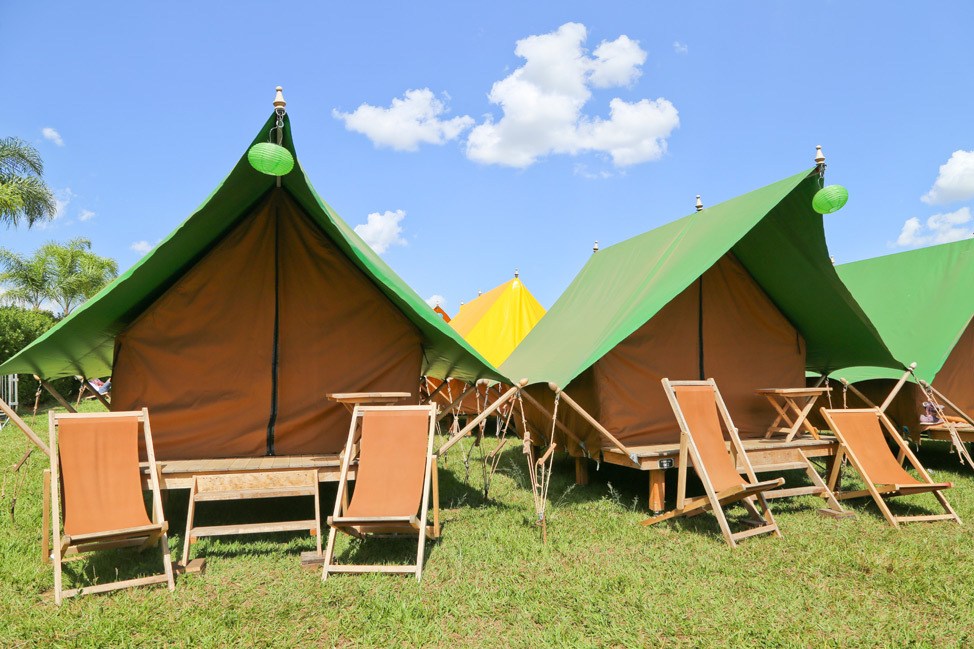 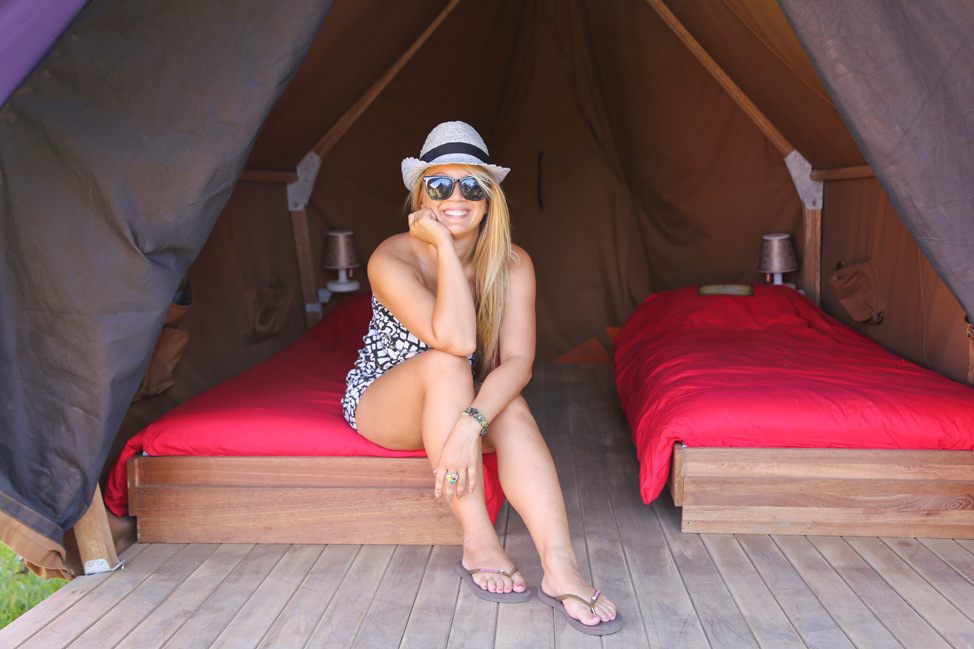 In Belgium, there were $70 tacked onto each of our tickets in surprise “service costs,” “payment costs,” and “fulfillment costs.” So I suppose I shouldn’t have been surprised when we got to the checkout and saw a sneaky $30 per person shipping fee for our festival entry bracelets. 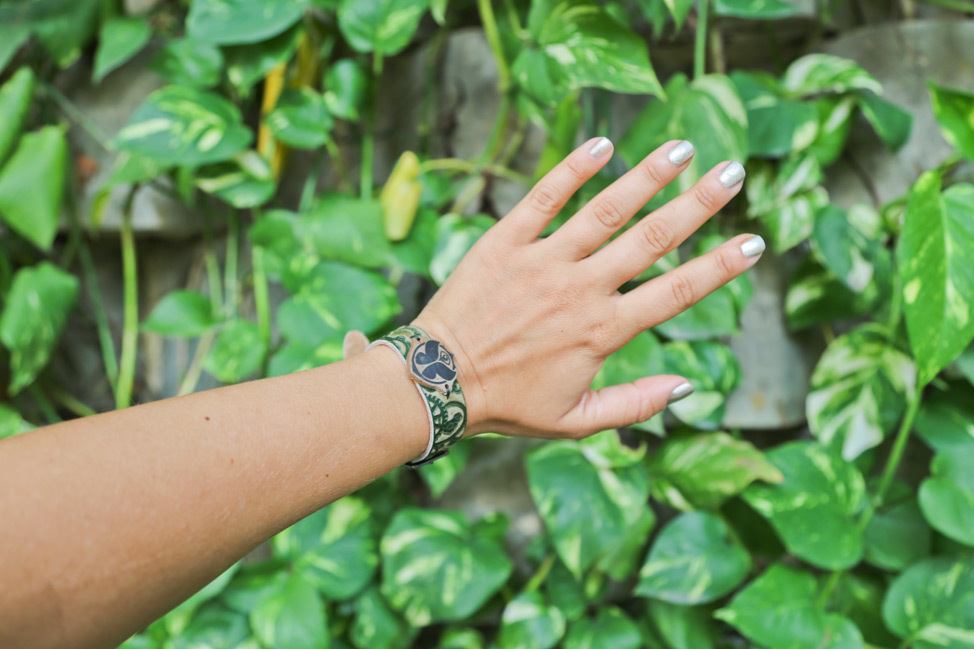 Unless you rent a car or cough up for a cab, there’s just one way to get to Itú — the official Tomorrowland Shuttle. Driving sounds like a nightmare, and cabs are insanely pricey. On one message board I saw a traveler was quoted $130 each way from Guarulhos Airport to the festival grounds, yet I met a group at the festival who arrived at the airport, missed their pre-booked transfer, and paid $200 for a cab on the spot. Yikes.

So, the official shuttle it is! Three shuttle lines are available from Guarulhos Airport, Viracopos Airport, and downtown Sao Paulo. By the time we scooped up tickets, the ones straight from the international airport Heather was flying into were sold out — which was fine by me, as I’d been hanging out in the city sleeping off my jet lag for a days. So Heather took a cab to my hostel and we went together to the Sao Paulo line after grabbing a few essentials at a nearby market. We paid 135BRL/$34USD round trip — one of the few bargains of the weekend. And it would have been even cheaper if we’d booked before February 21st, when prices were just 90BRL!

An Uber to Vila Madalena on the way back into the city after the shuttle dropped us off was about $5.50USD — not included in these totals, but crazy cheap.

Read more about the shuttles to Tomorrowland Brasil in my festival survival guide. 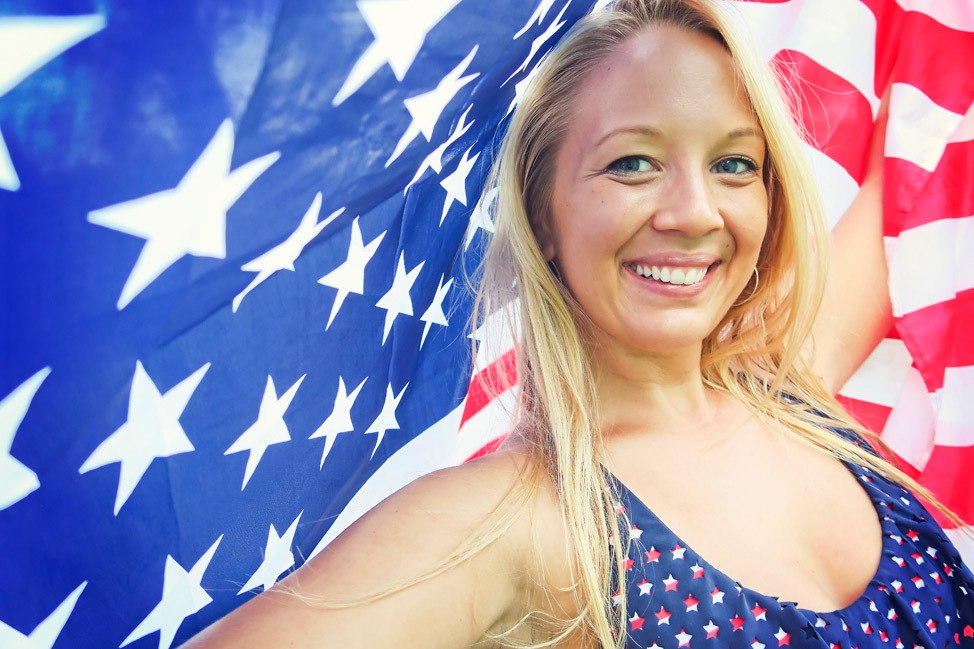 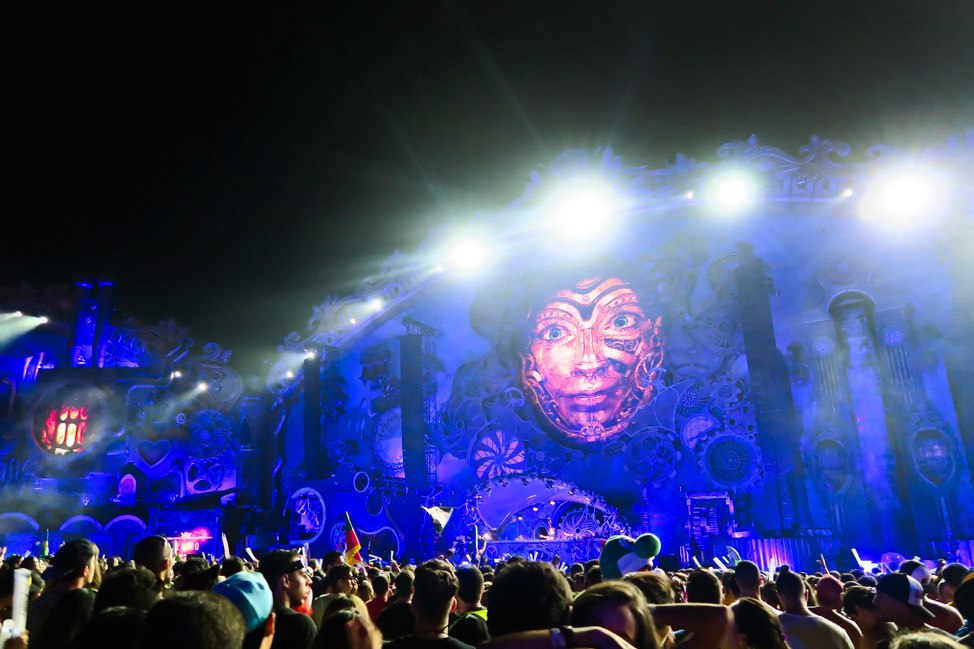 This is where things start getting cheaper than Belgium — on the ground in Brazil. Heather and I spent $38 each on food and alcohol from Sao Paulo to bring into Dreamville. A few pieces of fruit and granola bar snacks go a long way when you have a hankering but don’t want to leave your tent, and it’s nice to have a few drinks at the campsite before you head into the festival. We actually had tons of snacks leftover that we brought with us on the next stages of our trip.

However, we made a critical mistake when planning for Tomorrowland Brasil — we didn’t consider that the regulations for what you could bring into Dreamville might be different than they were in Belgium! In Belgium, the only rule was no glass; otherwise it was a pack-what-you-wish free for all. Not so at the Brazilian version, where we later learned we were limited to: 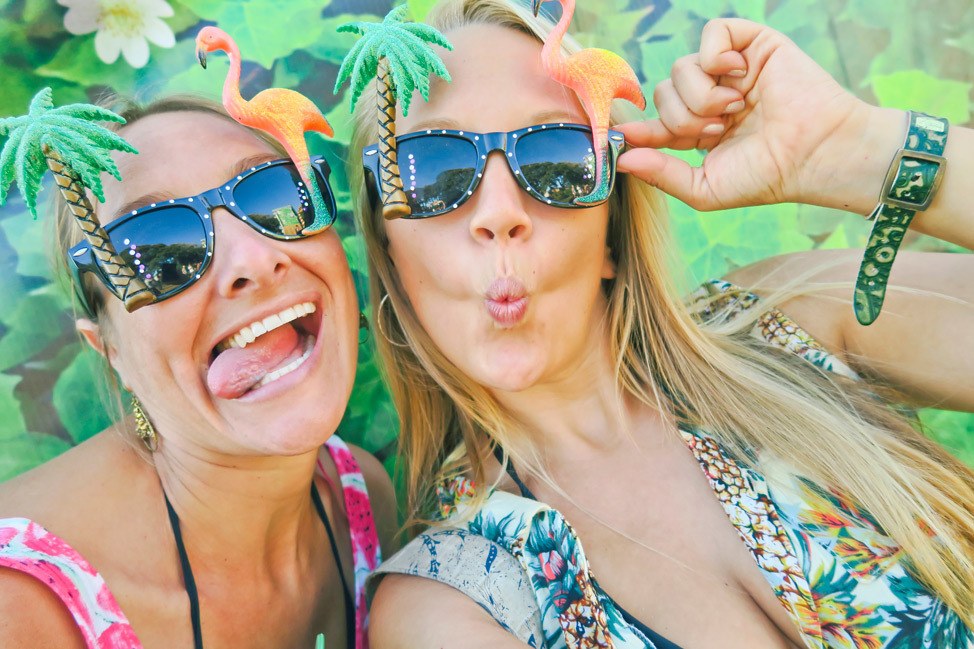 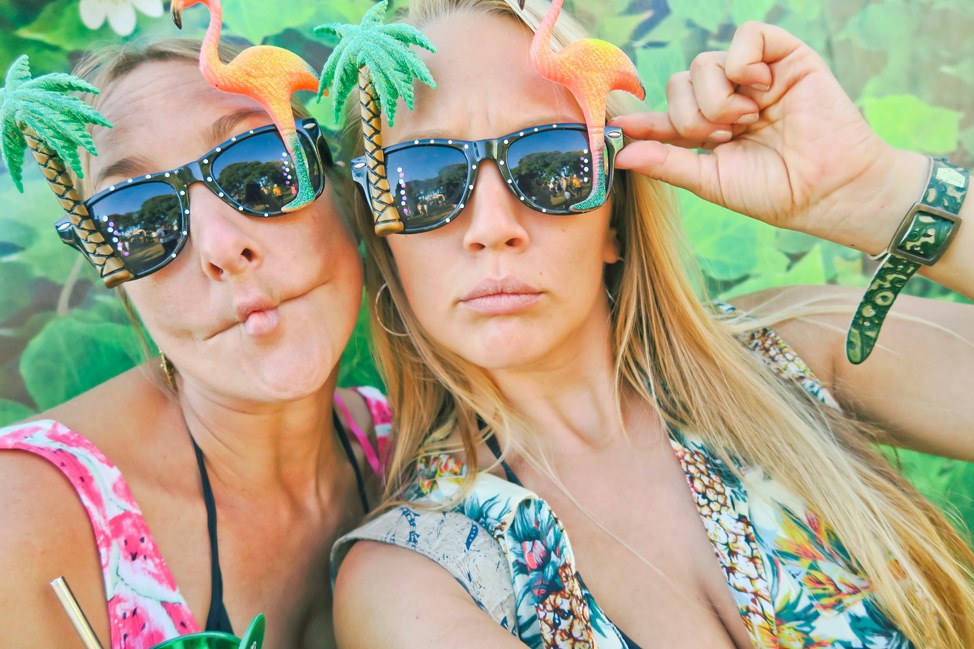 We also needed an authorization voucher to bring in food and drinks, which Heather had printed out and packed with our tickets and other vouchers. However, we got massively lucky and the one and only bag that wasn’t thoroughly searched on our way into Dreamville — I’m talking they opened every single thing in my makeup bag and sniffed our water bottles for booze — was the one in which we had all the brand new bottles of premium liquor, juices and sodas we’d just stocked up on. I would have been devastated if we’d had to toss them! We don’t drink beer, so following those rules would have been a massive bummer, and I’m not sure how strict they are — ie. if canned cider or malt beverages would pass the test.

We didn’t even realize how inadvertently lucky we were until later when we were the only people in Dreamville with liquor. Since we didn’t know we were doing anything wrong until later, we hadn’t even tried to hide it from security! I give this rule two major thumbs down, though to be fair it may be a local regulation rather than a Tomorrowland one.

The one upside to this crazy vetting into Dreamville was that security from Dreamville into the festival itself was pretty lax — we walked through with all kinds of food and drink and were never hassled. 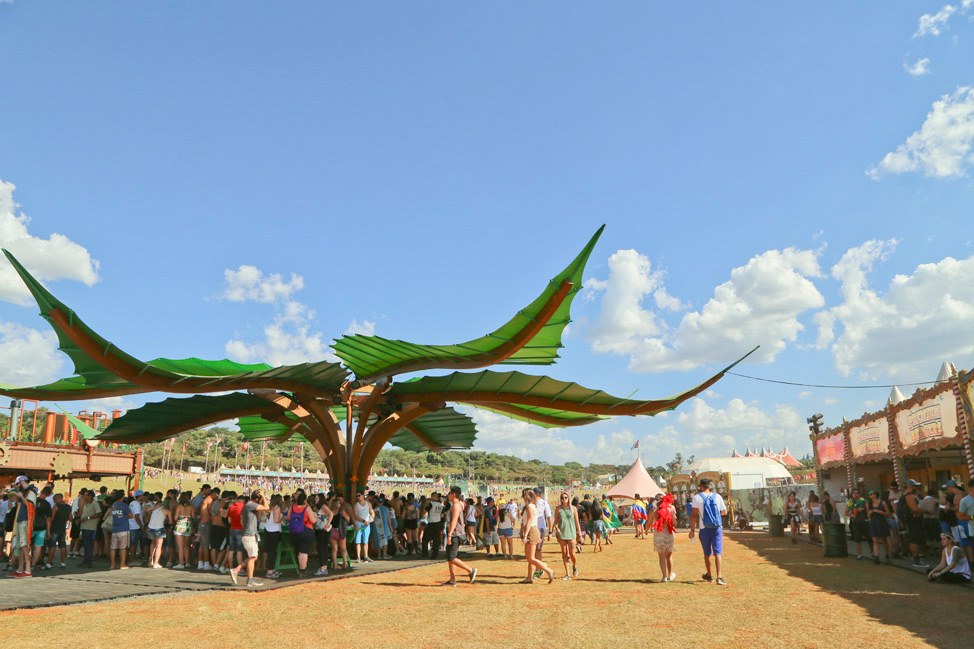 Heather and I planned out a few fun costumes and matching outfits we wanted to wear ahead of time, mostly using things we already had. We did however order a few fun little extras, including American and Caymanian flags (the iconic Tomorrowland uniform), Brazilian flag leggings (which we got a bajillion compliments on and were definitely the highlight of the trip!), and our fun flamingo sunglasses (which sadly were stolen in Dreamville). 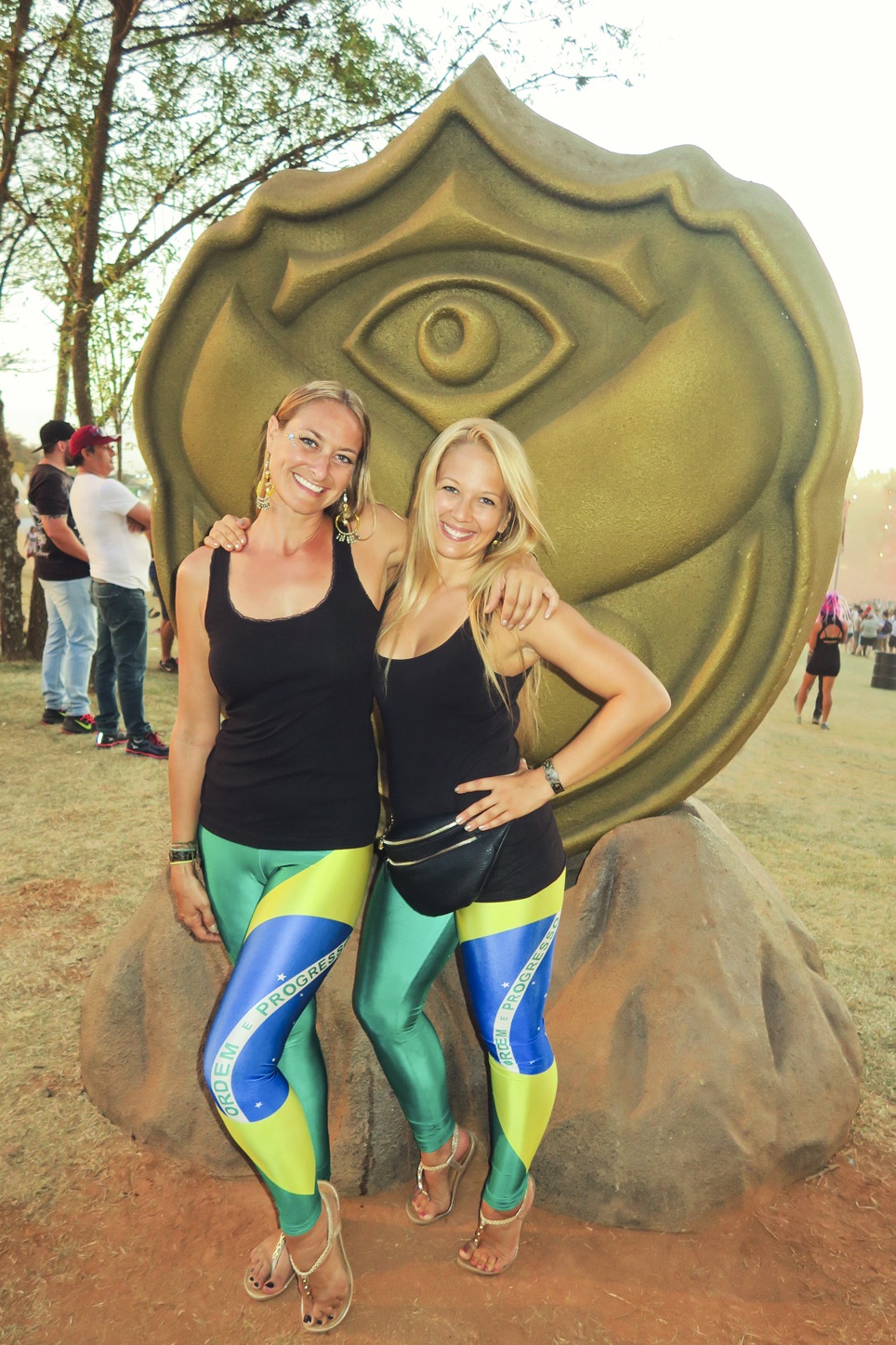 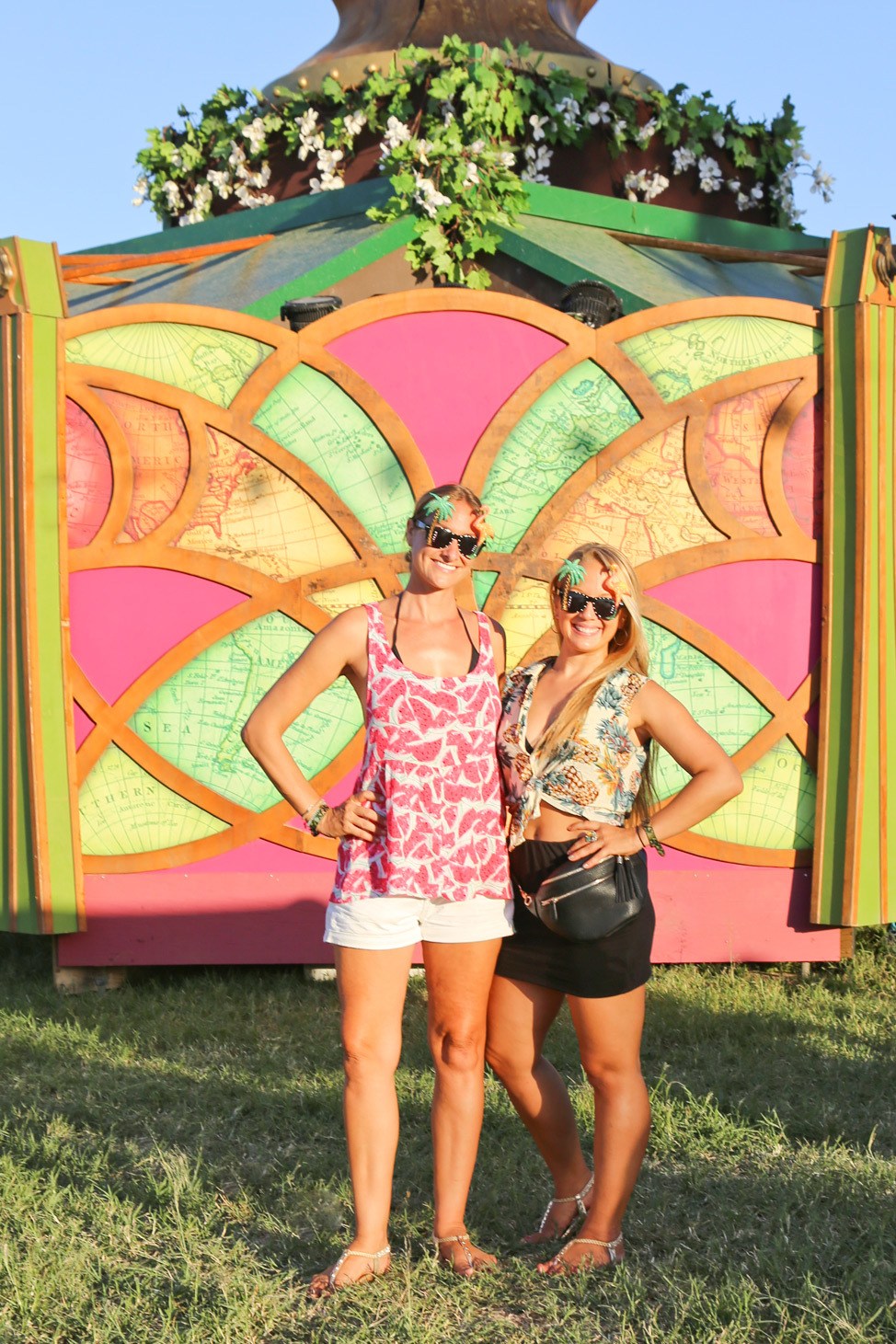 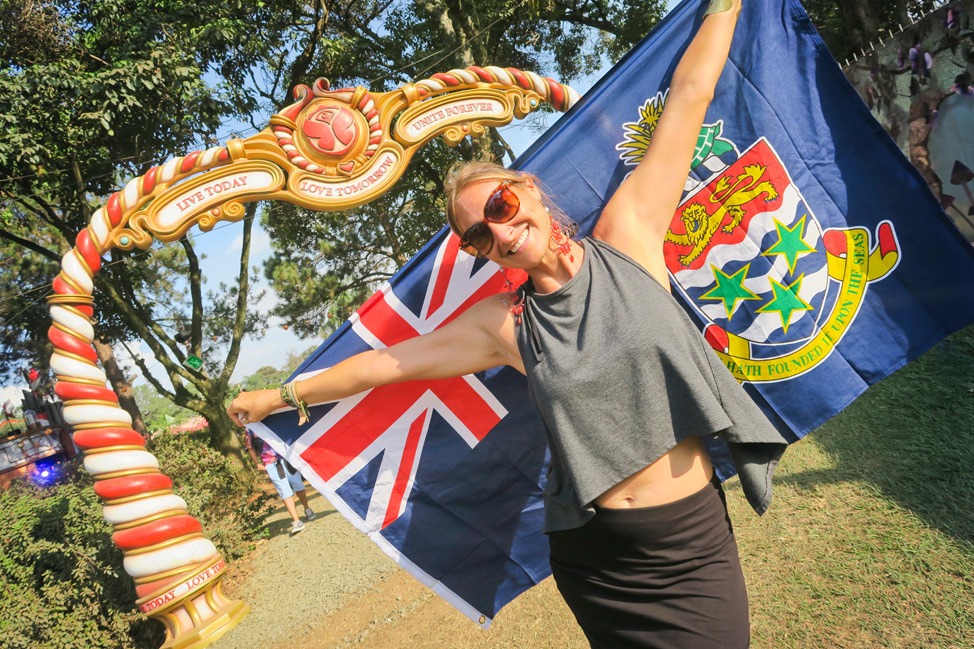 Pearls are used to buy food and drinks at Tomorrowland — the festival is completely cashless and purchases are made via your Tomorrowland entry bracelet. Overall, we did a little less damage than we did in Belgium, where we spent $208 each on onsite food and drinks.

We loaded up our bracelets with pearls about a week before the festival, spending 800BRL/$228USD upfront on 128 pearls and as every load of 200BRL received a 2.5 pearl bonus until April 19th, we also got a 10 pearl bonus. About a month later, we received the promised refund for our unused pearls minus the one pearl we were charged for the refund. 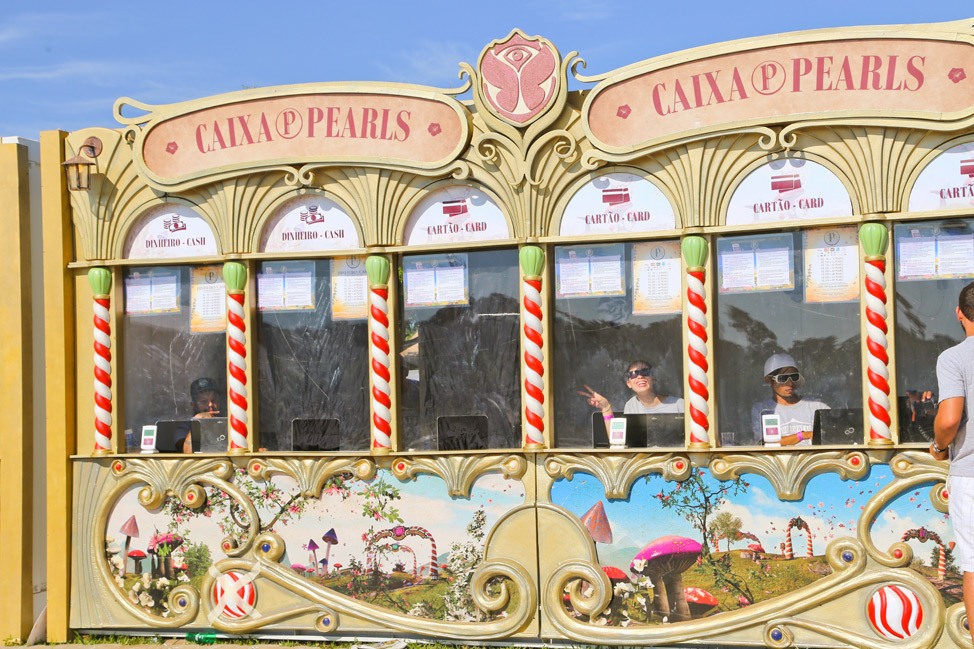 Generally, food prices were a bit more favorable than what we paid in Belgium. For example,  breakfast at the posh Dream Lodges was just 5 pearls or 31.25BRL, around $9USD. It included eggs, coffee, pastries, fruit, and more — and we thought it was a great value. Here are some other examples of what things cost in pearls. Remember, each pearl is worth 6.25BRL, or $1.79USD at the festival weekend’s conversion rate.

Read more about the food at Tomorrowland Brasil in my festival survival guide. 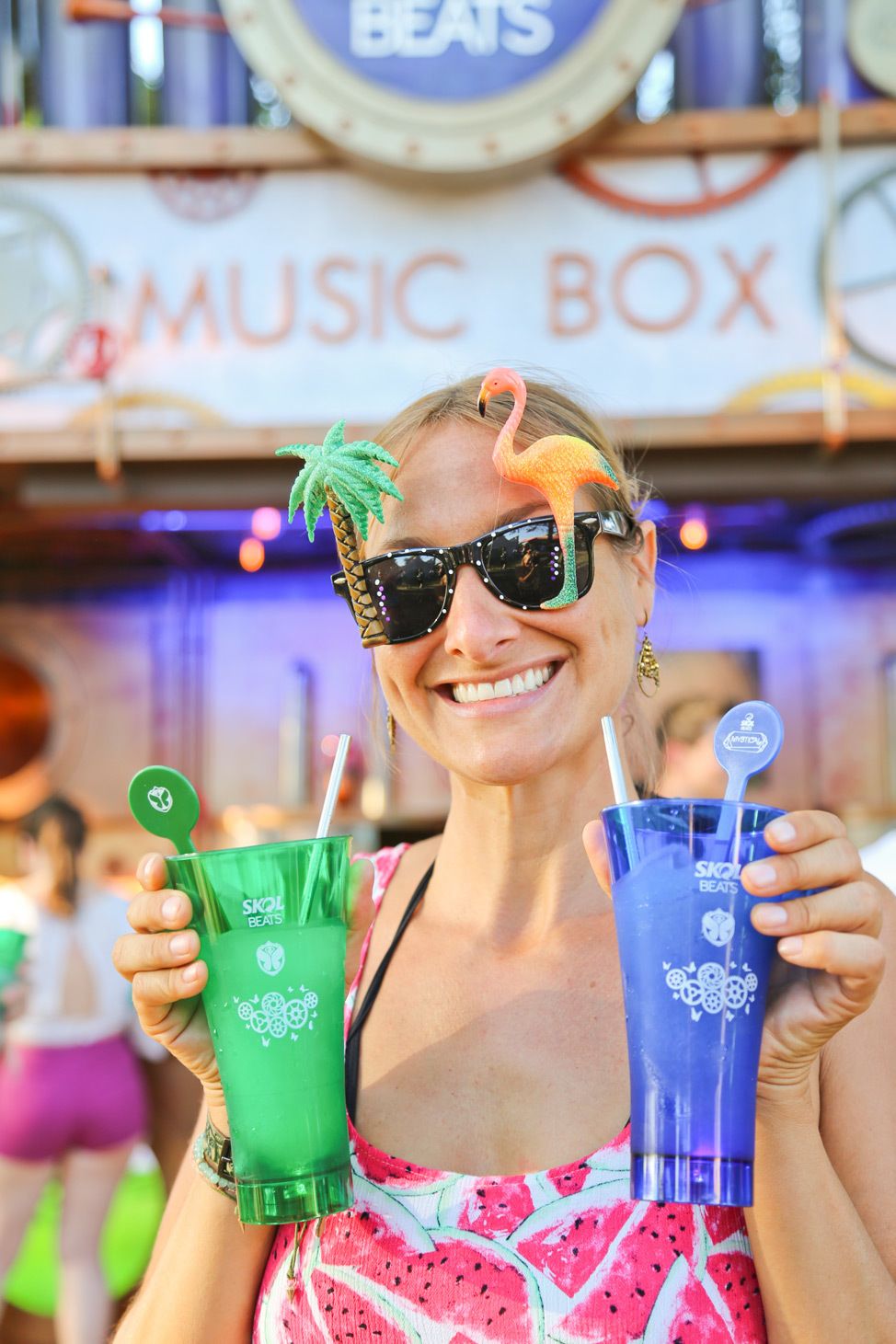 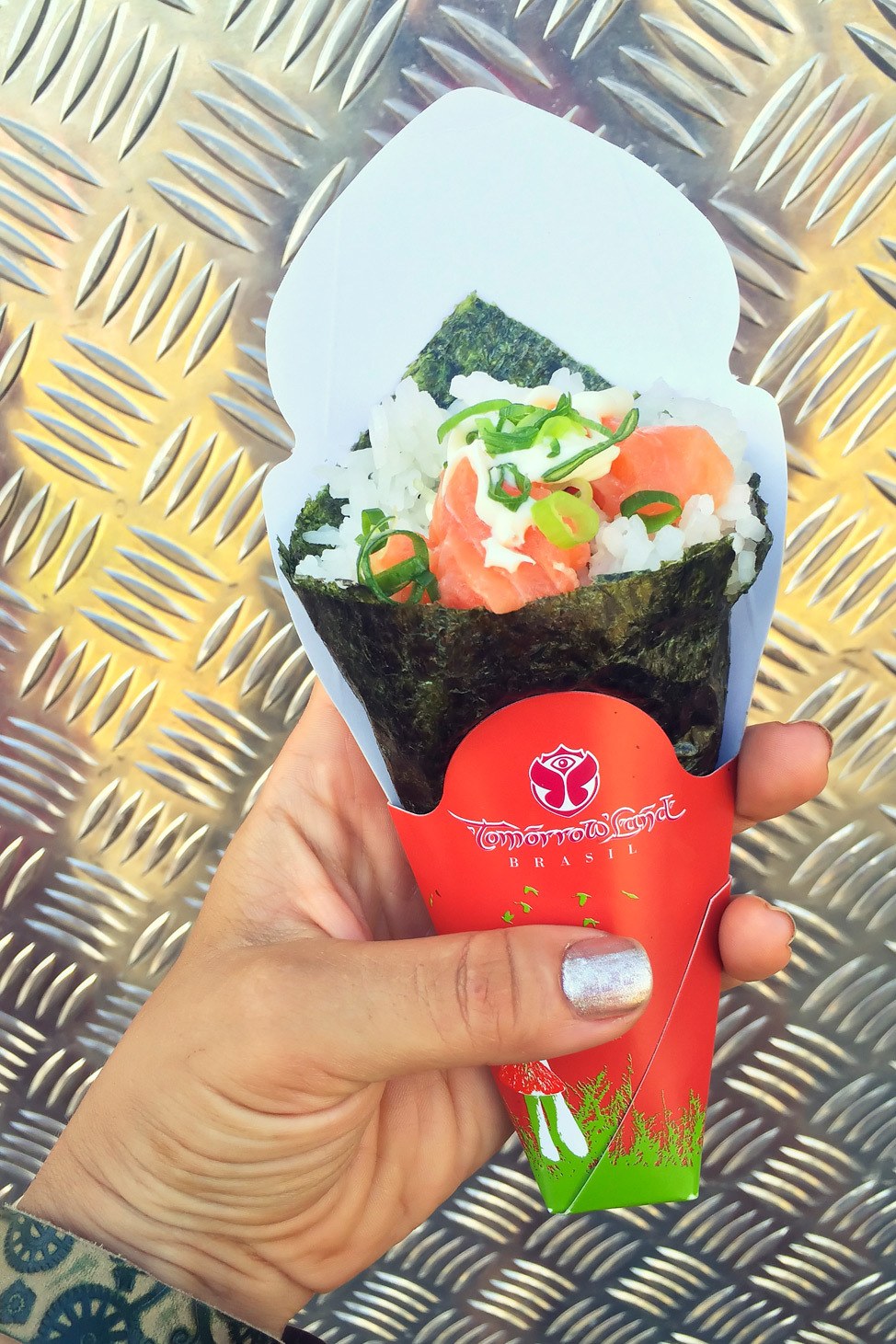 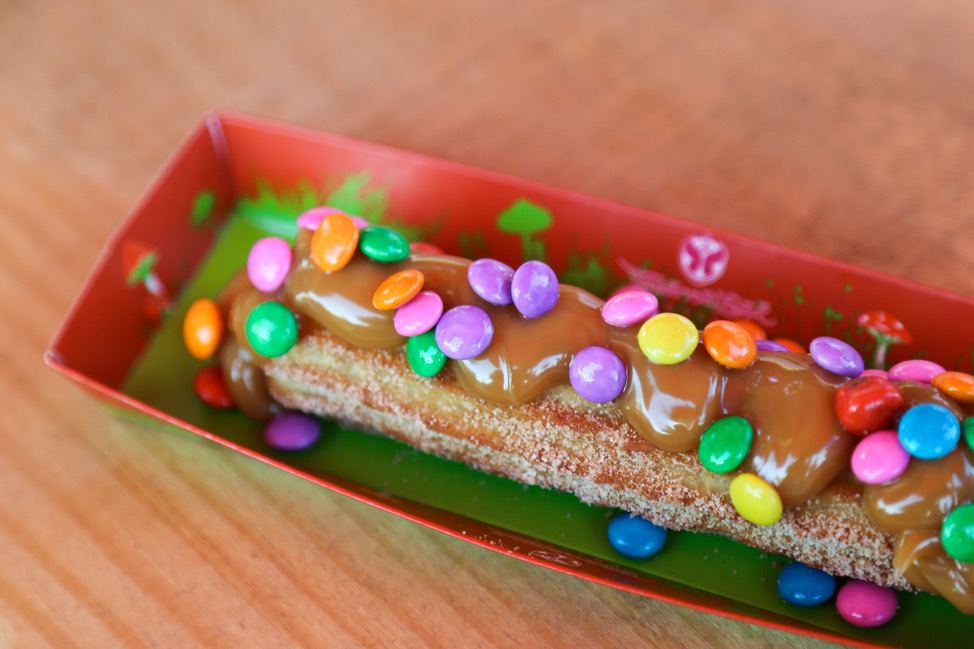 As the lock box in the Dream Lodges isn’t large enough to fit dSLR cameras, we split one locker ($32US or 120BRL ahead of time, or 150R if bought onsite — so prebook to save!) at the Dream Lodges. And we are glad we did. It was big enough for our laptops and camera equipment, and it was easy to pop by on our way in and out of the festival. Again, considering we had a few non-essentials swiped from our tent, I’d recommend locking up anything of even nominal value. 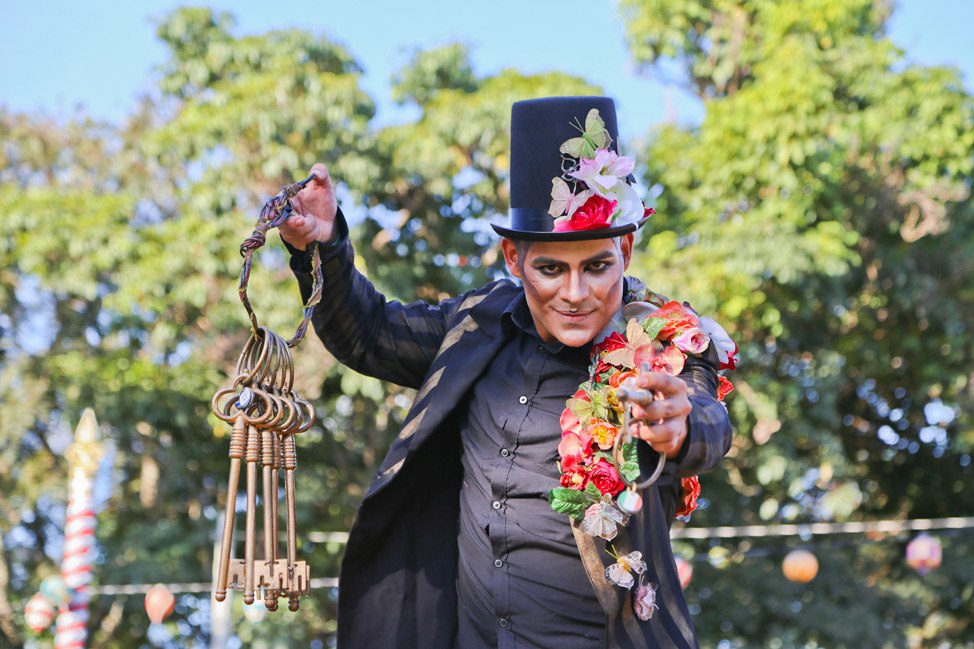 This was our big spontaneous splurge. On the last night of the festival we were kind of restless and looking for a new experience, and several of the friends we had made in the Dream Lodges were in the VIP section. We inquired about price at a small upgrade booth near the VIP tent and decided to just go for it, and told the girl staffing the booth we were heading back to our tents to get our credit cards. It was a bit of a hassle considering the Dreamville layout disaster, but we were excited. When we returned, we found the upgrade booth empty and the lights off. One of the security told us they’d closed for the night. Thanks for the heads up, booth girl! Determined not to have missioned back to the tents in vain, we kept pressing the issue, and eventually with much persuasion and insistence and waiting in lines and explaining our situation to like a dozen people with whom we shared no language, we were able to exit the festival, purchase the upgrade outside, and return. It was a mission! 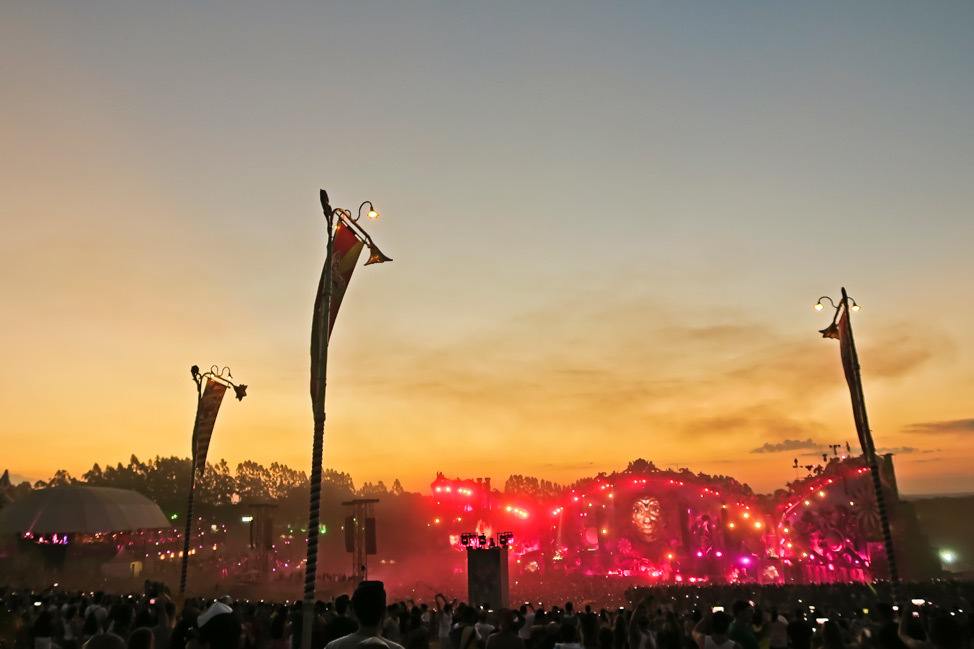 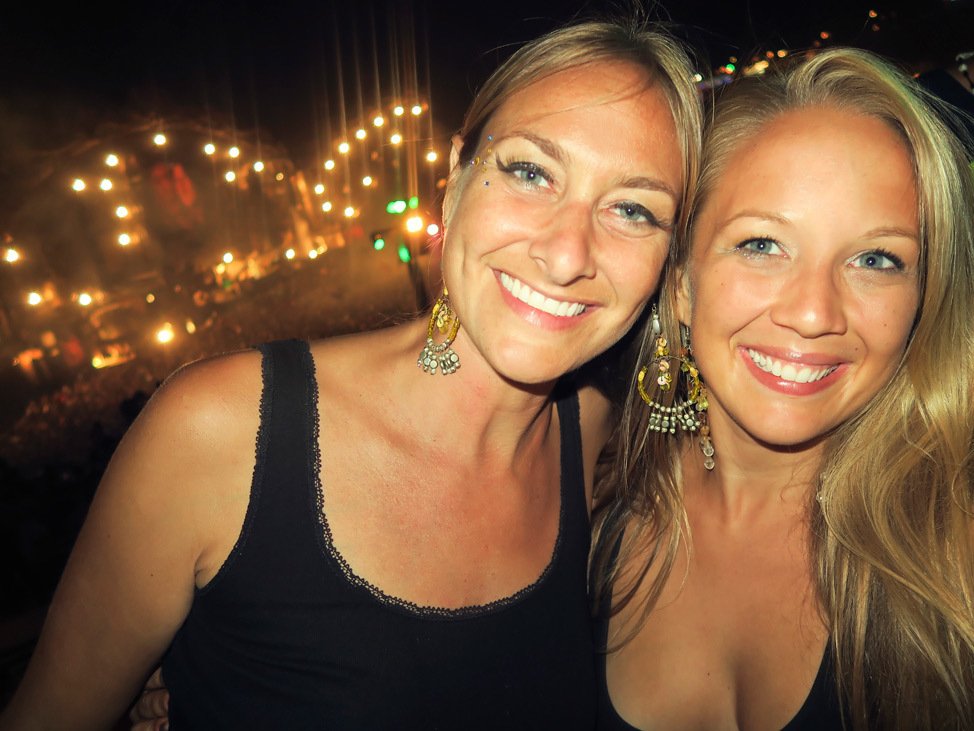 Once we were in, we found our friends, gawked at the amazing views, had fun with the characters and even managed to grab one snack off the last of the rotating appetizer trays. It was wild in there!

Was it worth it? Yes and no. I wish we’d upgraded first thing in the morning that day and enjoyed the VIP stage and perks the entire day and without hassle, in which case I’d say it’s absolutely worth the splurge, especially when you consider the cost of getting a VIP ticket upfront. Considering how much of our night we ended up wasting and how little time we actually spent in VIP as a result, the value is a little less clear. 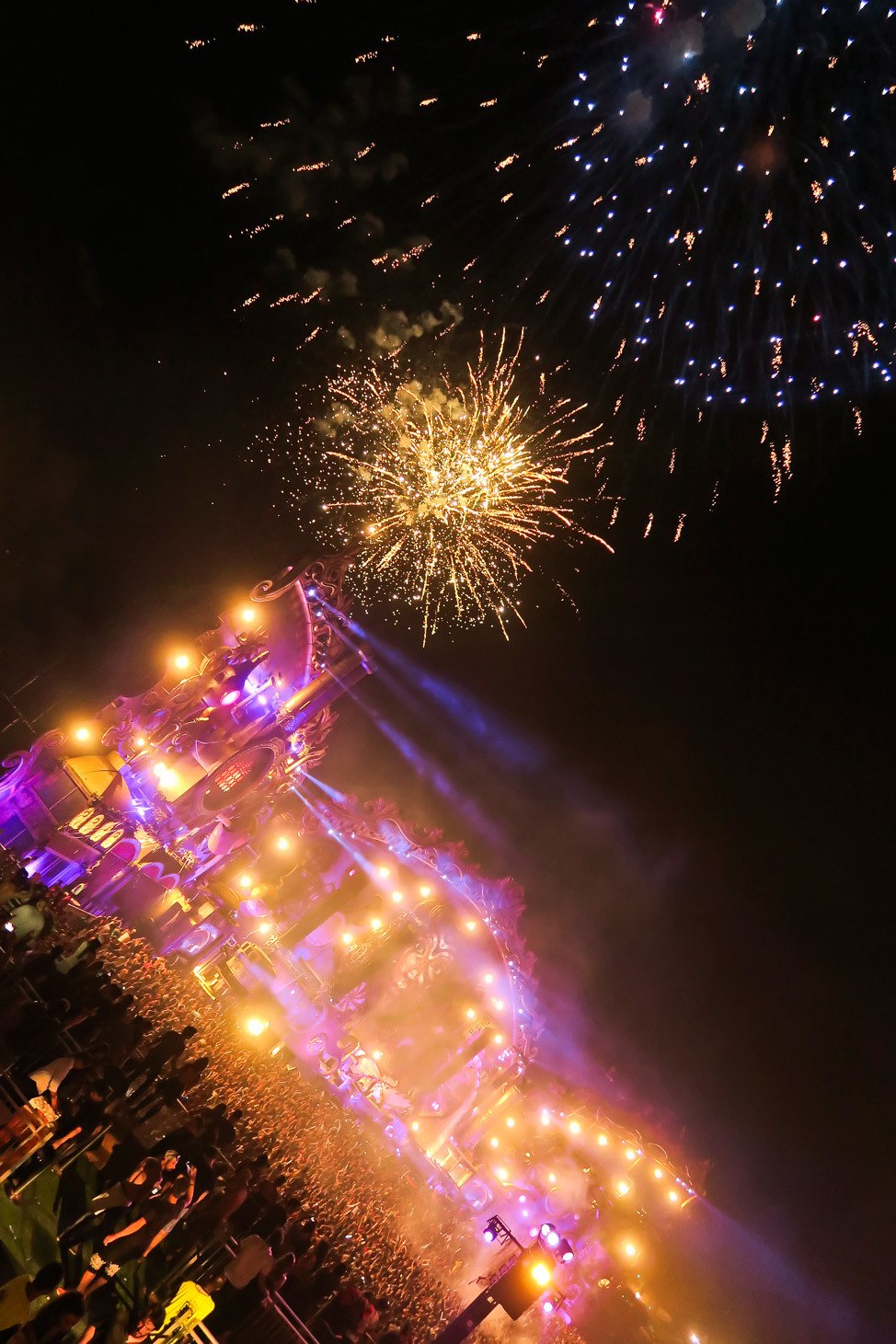 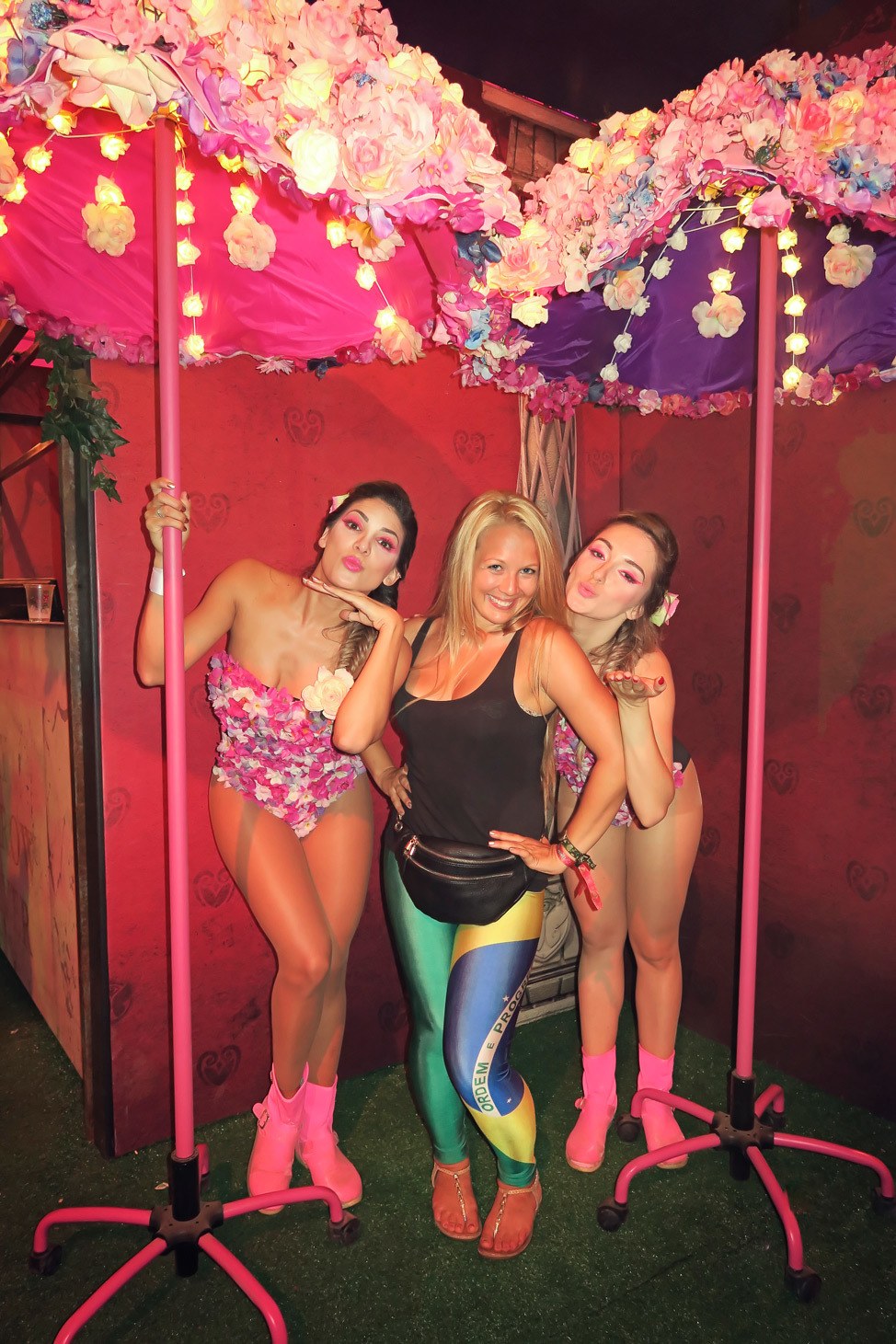 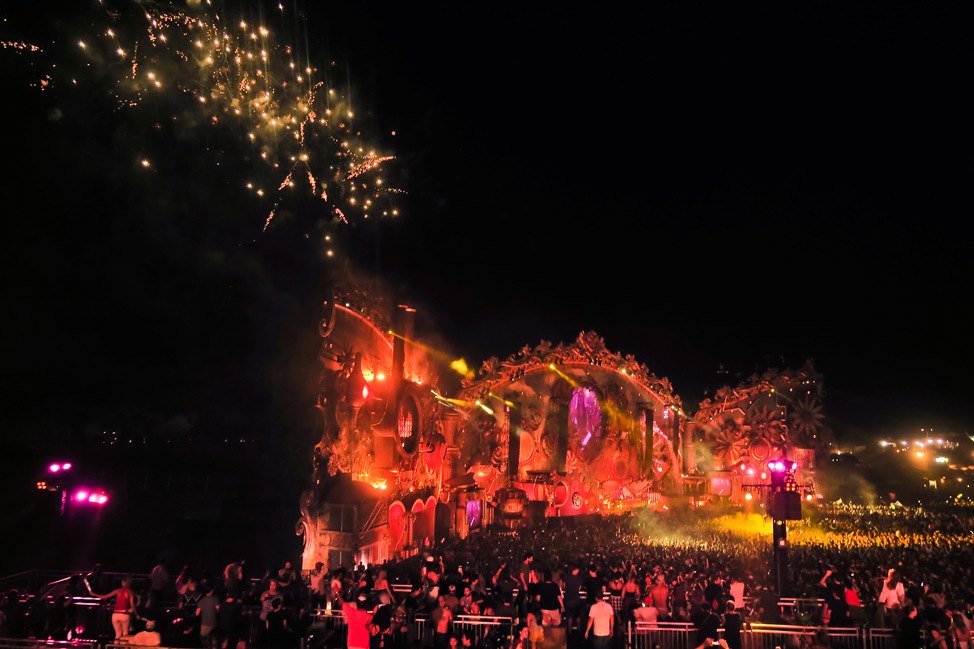 Again, I greatly wish I could turn back time and save over $700 by going for the upgraded easy tent, which would have brought us down to less than the $1,525 we spent at Tomorrowland Belgium. This was unquestionably the most expensive four nights and five days of my life. Um…. yolo?

If you’ve been to Tomorrowland Brasil, please share your own experience in the comments below!

Blogaversary Five: How I Make and Spend Money Blogging

Get On Board: My Cruising Bucket List What’s Keeping You Out of the Ocean? Debunking Diving Myths
22 Comments...