Even the crustiest of divers have to dry out sometime — even if it is only the mandated last day of their trip. (Divers have to wait a certain number of hours before flying after they hang up their fins, which leads many divers to consider the last day of a dive vacation their “dry day.”) And some travelers do come to Bonaire for reasons other than the reefs! Regardless of what gets a traveler out of the water, Bonaire’s topography is simply too starkly beautiful to only enjoy on surface intervals. I know that after a few days, I was itching to explore the island above sea level.

And so we headed out for a Twizy Tour with Roadrunners Bonaire. Twizy what what, I hear you ask? 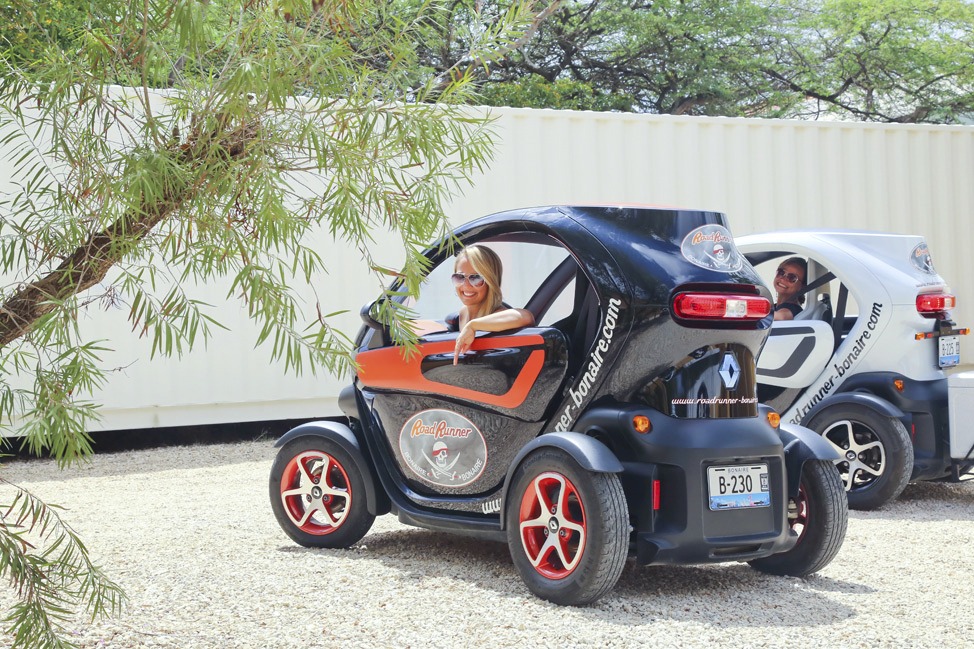 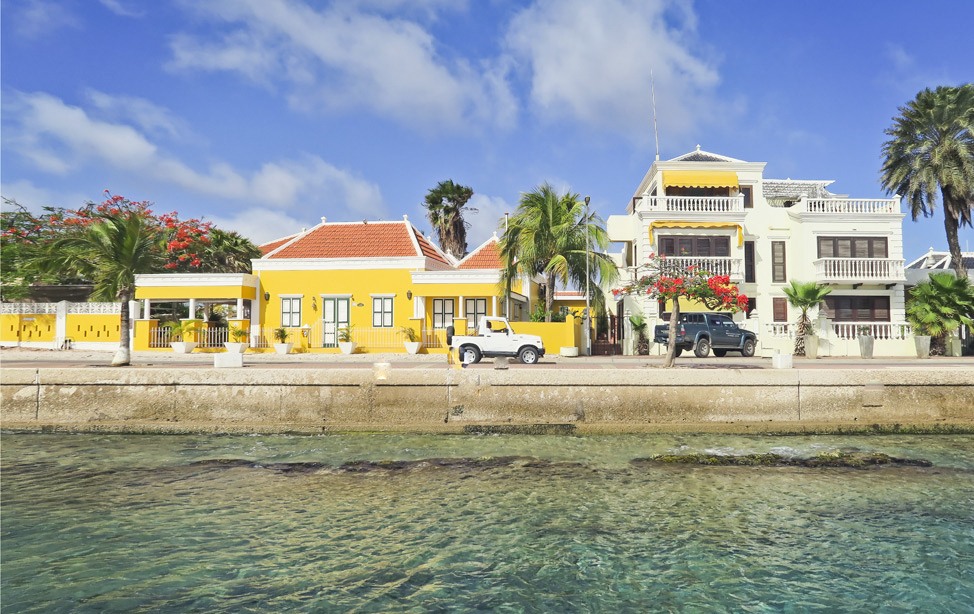 Twizys are two seater electric cars imported to the island by a Dutch island transplant named Hans. After signing waivers and flashing our drivers’ licenses, we commandeered his entire fleet of four Twizys and shrieked with adrenaline as we fired them up and following Hans’ scooter through the center of Kralendijk.

After passing through Bonaire’s quaint capital, we pushed forward to the island’s remote Northern side. Here, we had the roads to ourselves, and, having had some time to get used to the controls of the car, were able to start to have a bit of fun. I watched as my speedometer crept past 80kpmh, singing and smiling to myself while hot air came bursting through the open windows. 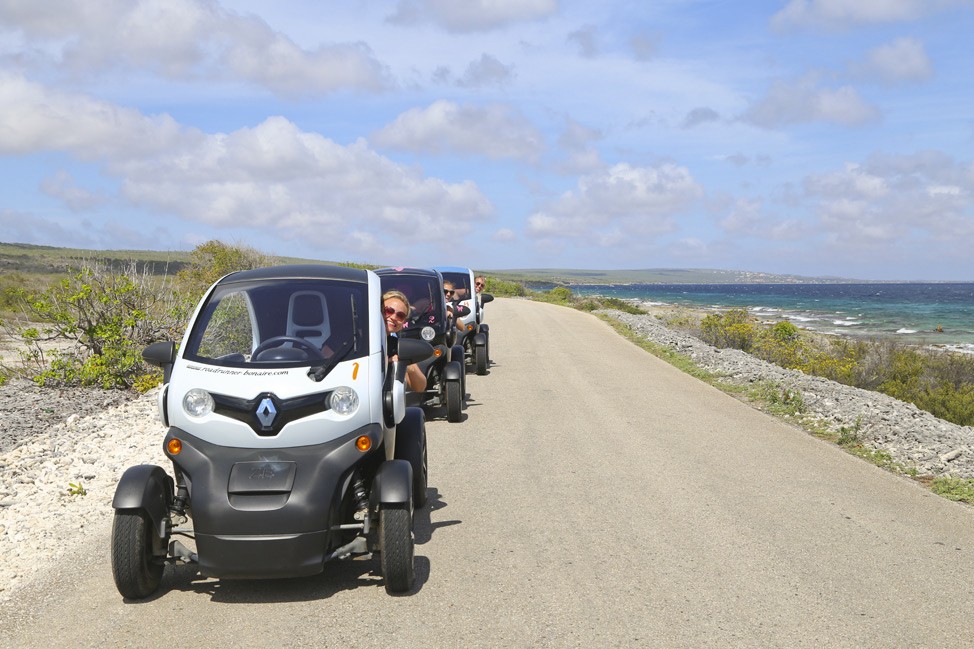 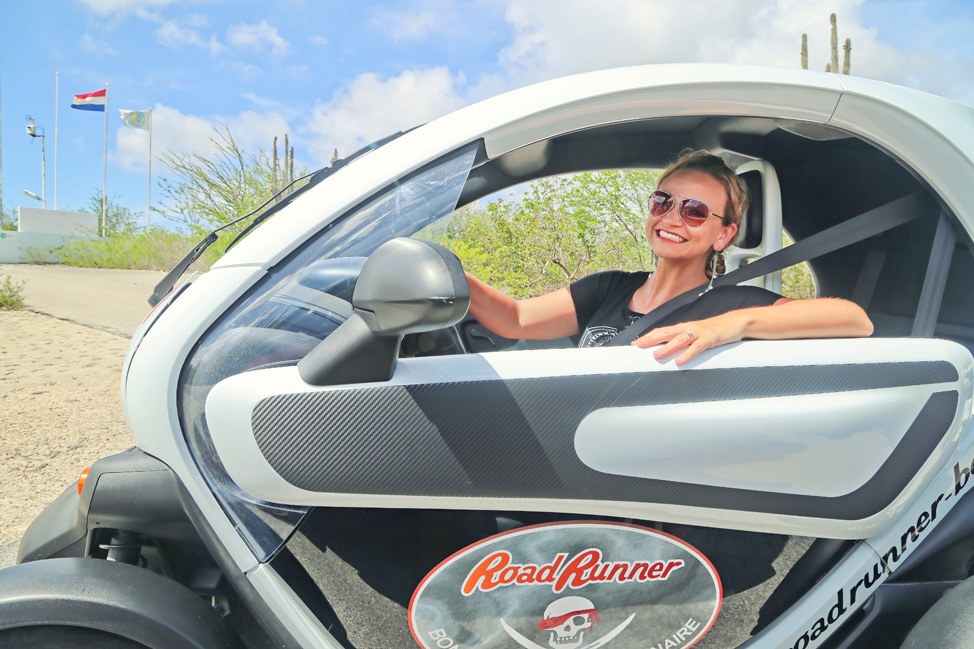 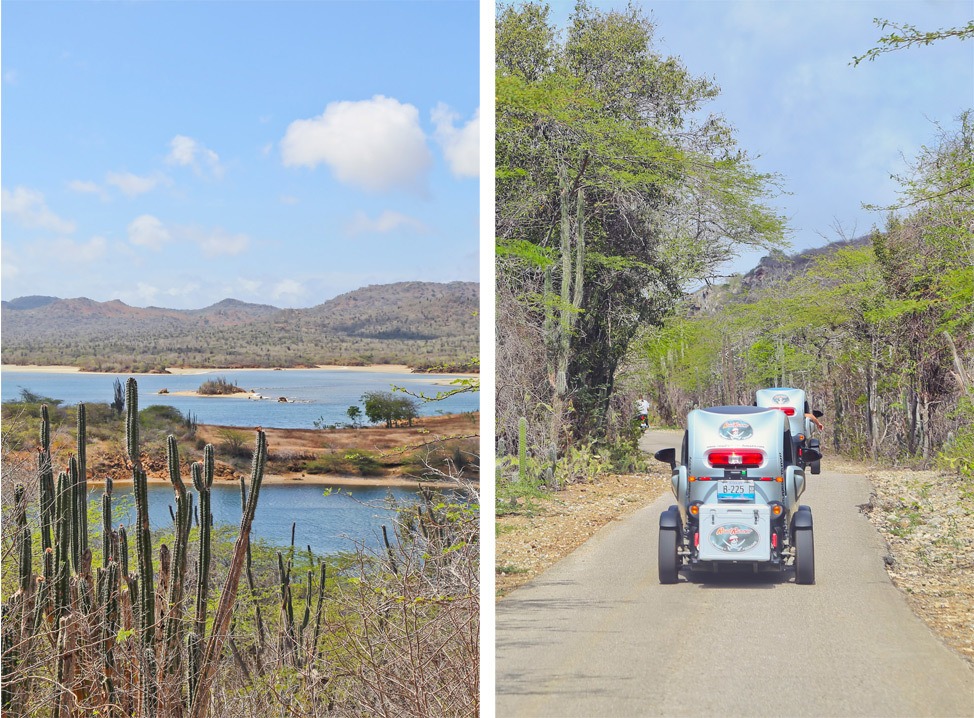 As we turned away from the coastal road and drove further into the heart of the island, I saw the shimmers of a large lake in the distance. We stopped for a few photos and a brief history lessons before finally spotting an icon we’d been searching high and low for all week — one of Bonaire’s beloved flamingos!

On typical tours, this would be the third or fourth stop, but due to a scheduling issue earlier in the day we were taking a slightly abridged version. 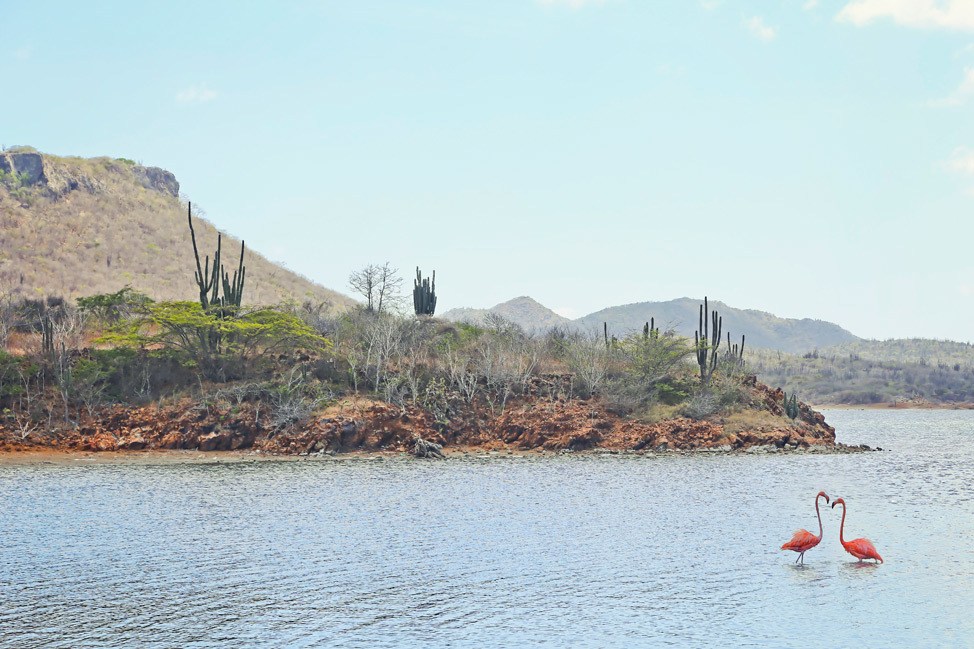 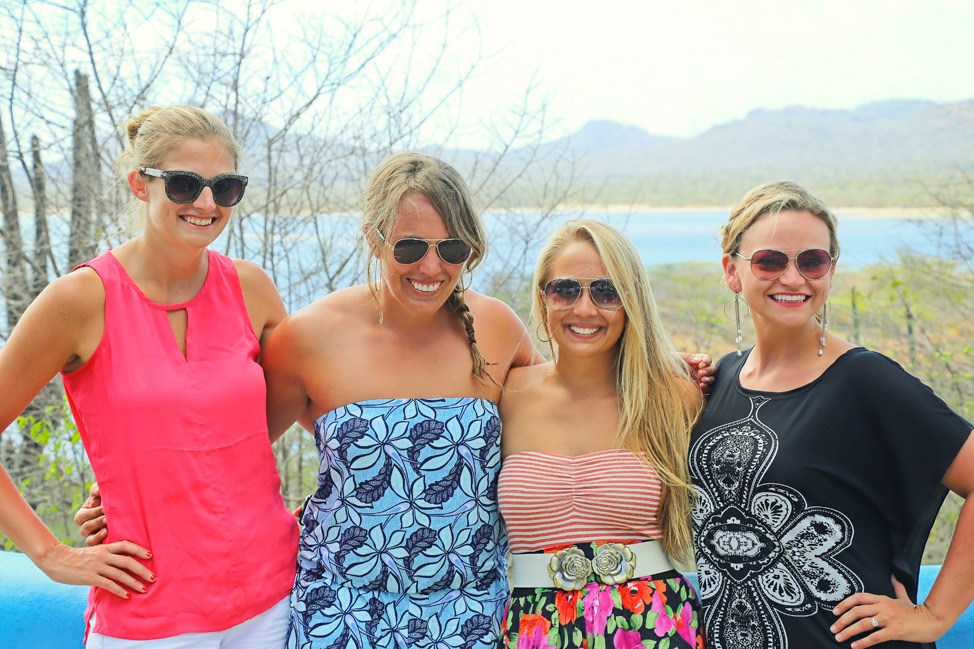 Signs of civilization began to emerge again, and soon we were in Rincon, the second of Bonaire’s two towns and the islands oldest settlement. It reminded me immediately of so many small towns and cities I’ve come across in my travels in Central America, and I instantly regretted we didn’t have more time to explore. 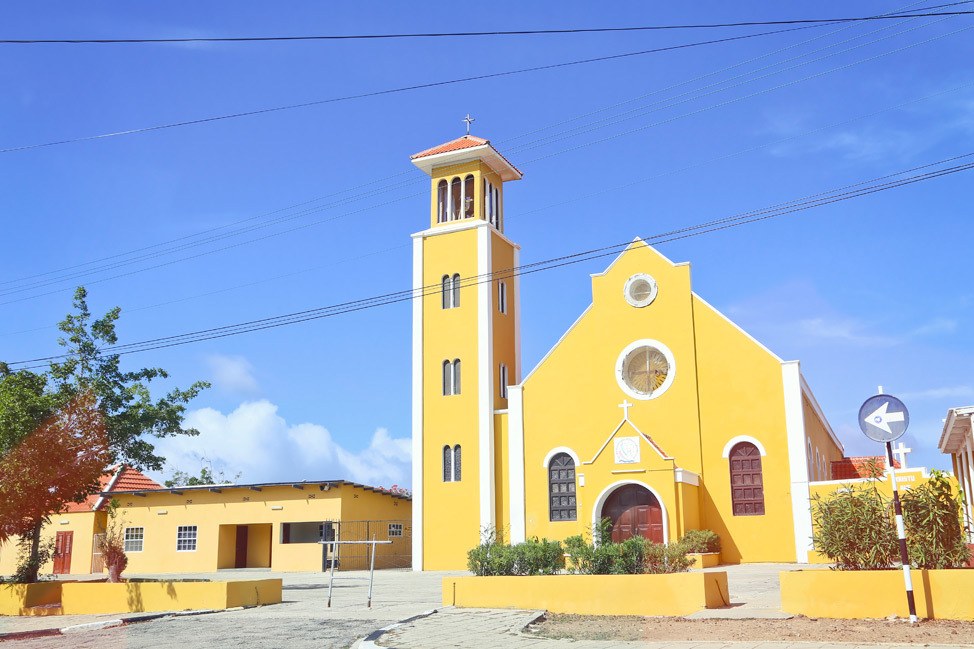 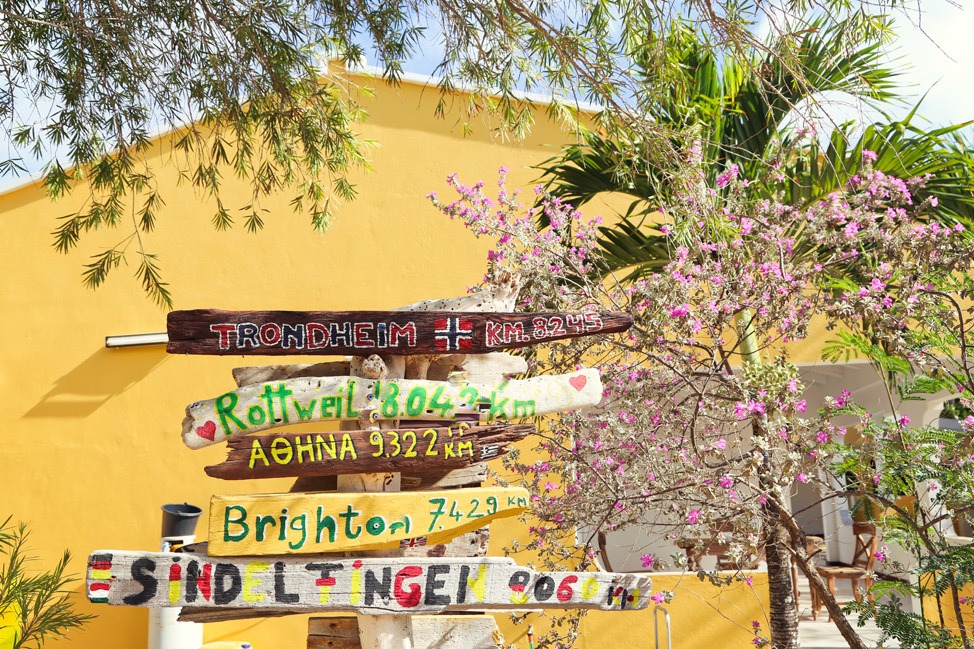 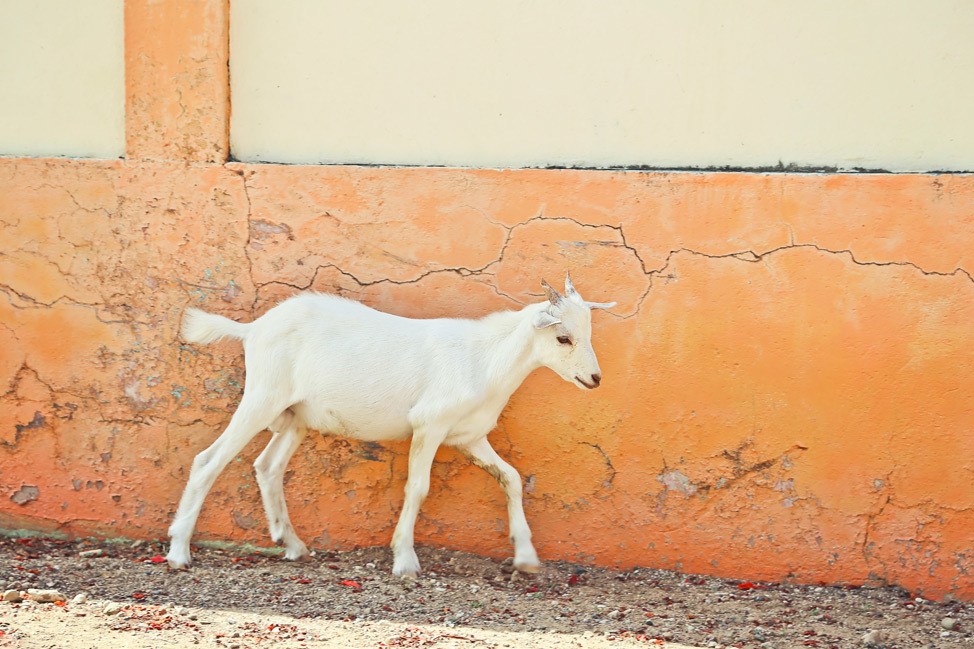 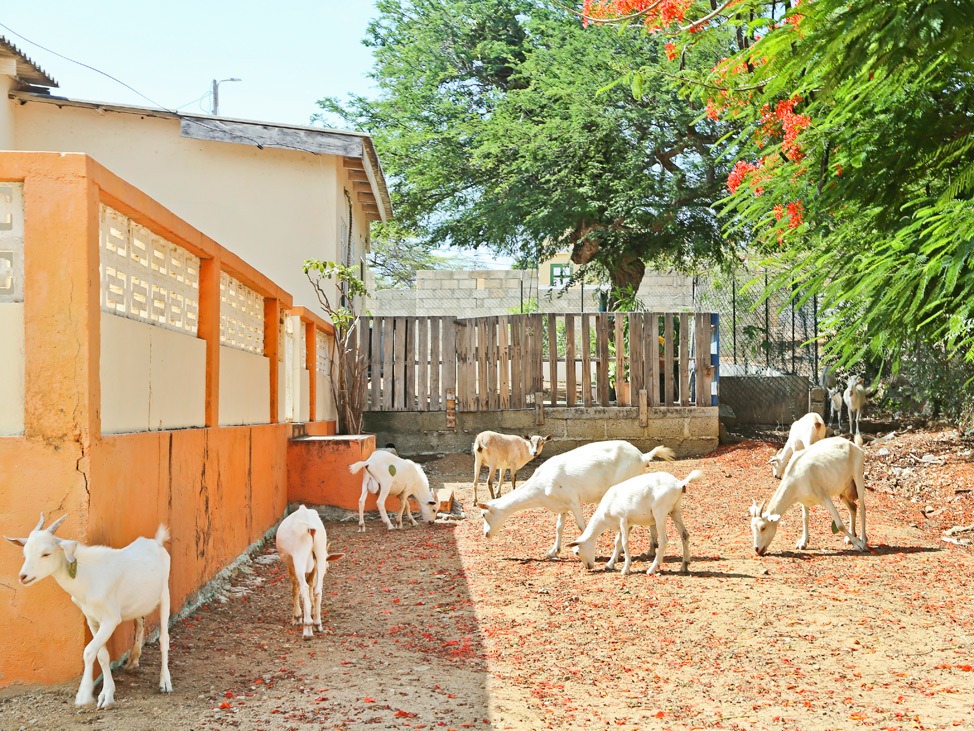 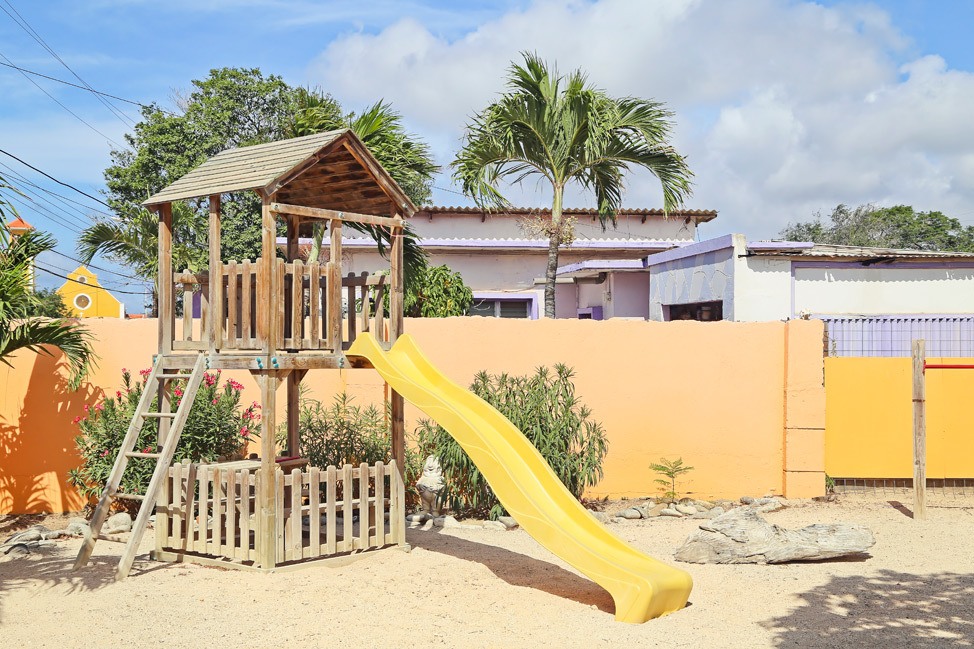 Our destination in Rincon was the Cadushy Distillery, Bonaire’s one and only such establisment. In addition to three spririts — Rom Rincon, Cadushy Vodka, and Captain Don’s Whiskey — the distillery more famously produces six flavors of liquor produced from one of the island’s most abundant natural resources. Cactus! I loved learning about the production process, not to mention tasting its delicious results.

The six flavors of resulting liquor represent the five islands of the Dutch Caribbean, plus the motherland, Amsterdam. We tasted them all and while I was tempted by several, it only seemed right to buy a big bottle of Cadushy of Bonaire to bring home. 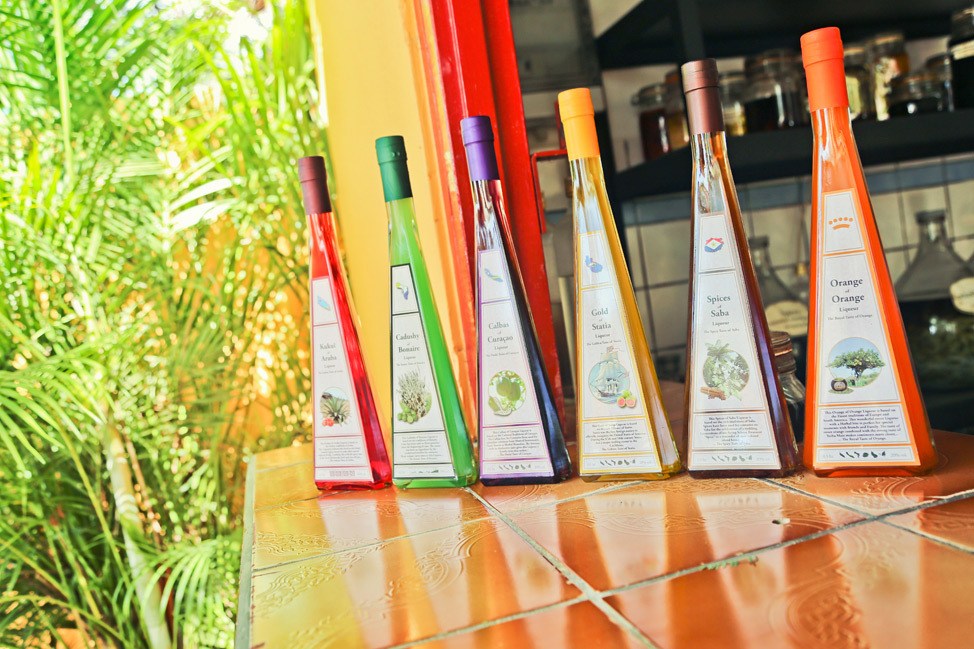 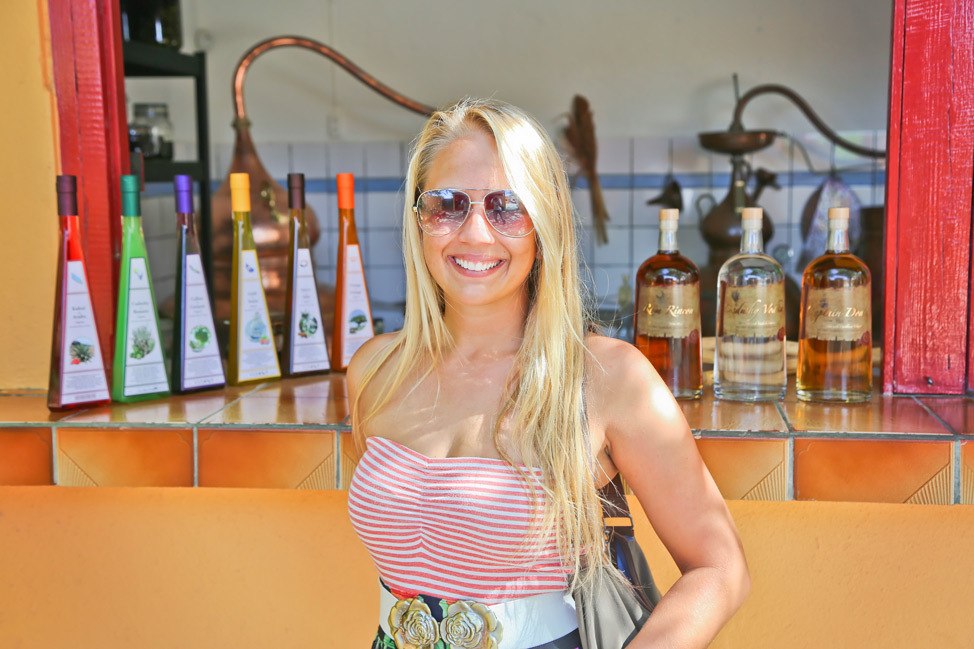 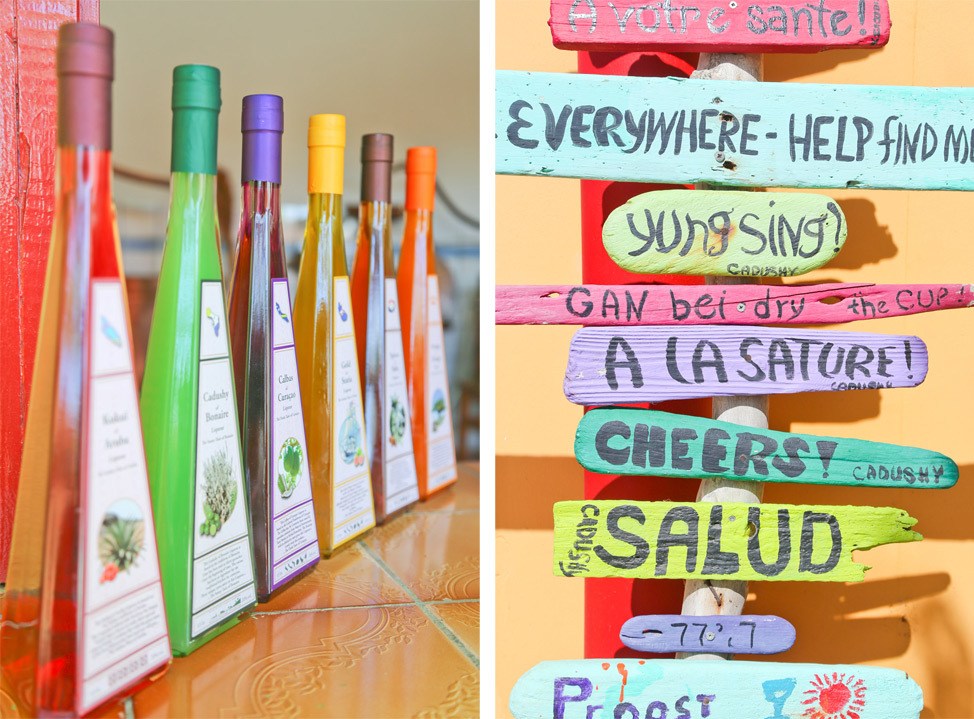 Loaded up on souvenirs, we made our way back toward Kraledijk. Again we found ourselves on a remote road with plenty of room for photo stops. My eyes kept telling my brain that we must have taken a wrong turn to somewhere in the American Southwest, and my brain replied that nope, this too is the Caribbean. 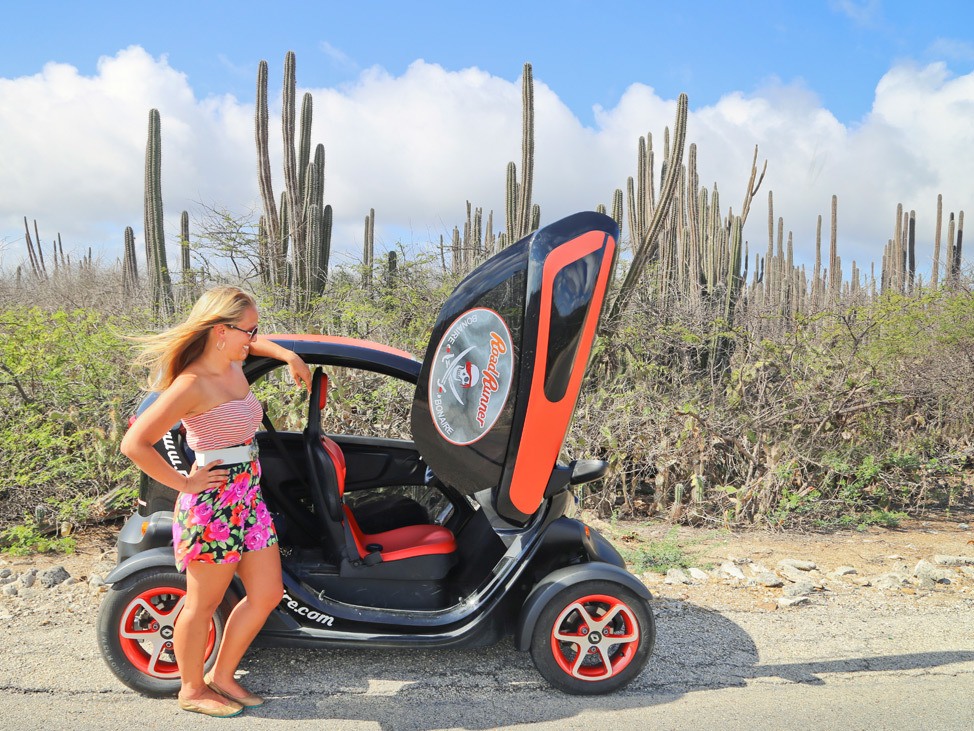 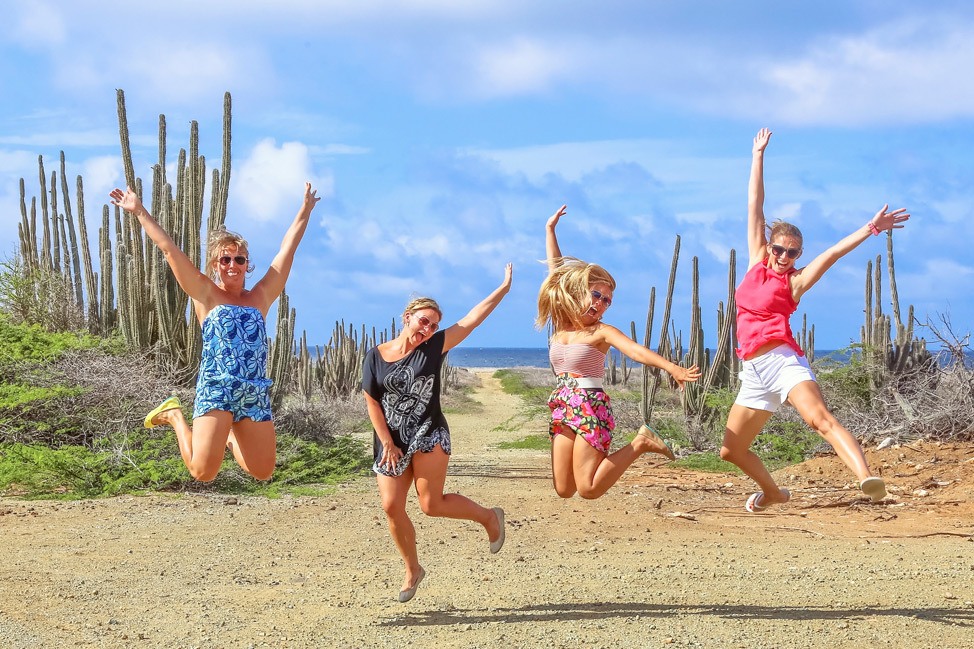 At $75 for the driver and $35 for a second adult, this 4-5 hour tour is a pretty darn affordable thrill for a couple or pair of friends who don’t mind trading off driving duty (though personally I’d recommend you splurge and each helm your own Twizy).

I have to admit that I was a little skeptical of Road Runners at first. I’m more of a bicycle tour girl than a Segway one, and I thought this might be a little too gimmicky for me. It only took a few seconds behind the wheel to let that go! After all, as Hans explained, these electric cars are sustainable, eco-friendly, and perfectly in line with Bonaire’s commitment to conservation. Plus, the little taste we received of Northern Bonaire was all I needed to know that next time I return to the island, I’m packing a pair of hiking boots to spend some time exploring there. 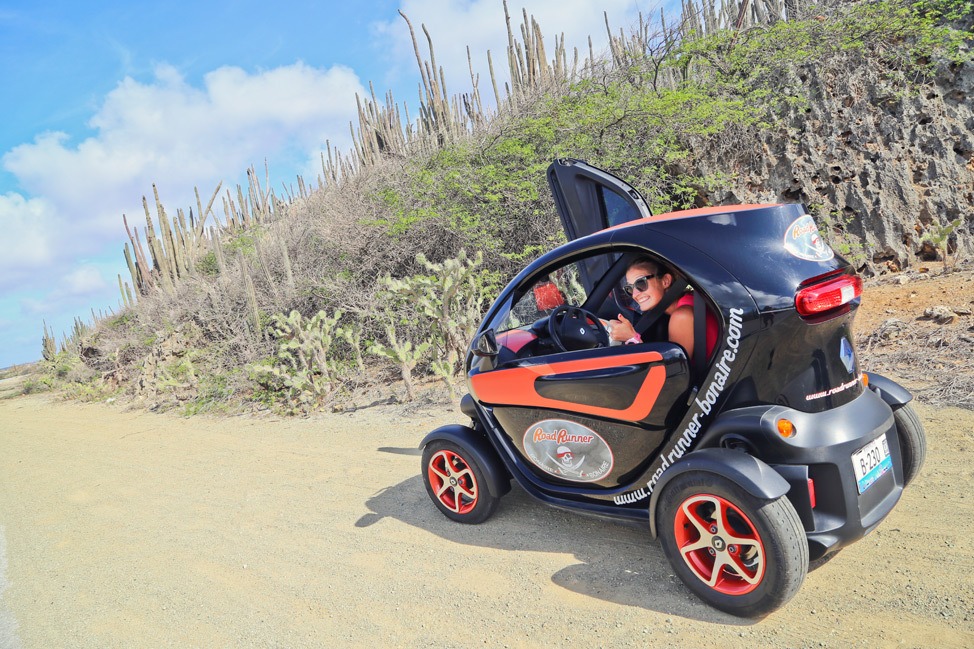 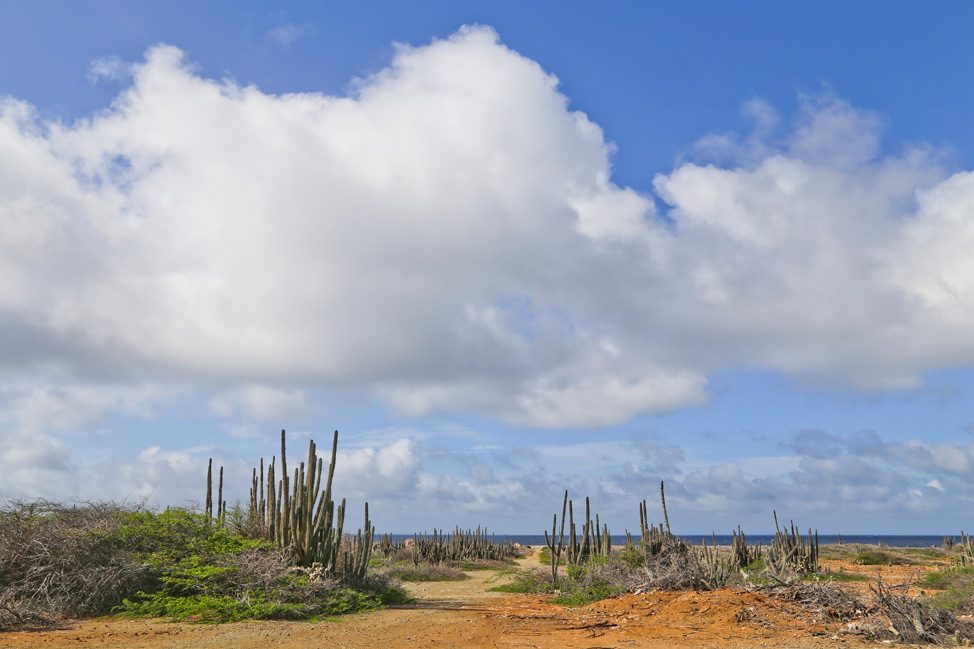 Have you ever driven an electric car? Would you sign up for a Twizy tour?

Many thanks to Bonaire Tourism for hosting me. As always, you receive my honest thoughts, full opinions and poorly written jokes regardless of who is footing the bill.

Inside My Bag: What to Pack for Bonaire and Aruba The Wanderland Guide To Travel Planning: Breaking it Down to Bangkok and Siem Reap
20 Comments...