When you think of diving and South East Asia, what comes to mind? The coral reefs in Malaysia? The jellyfish of Palau? The liveaboards traversing the Similan islands?

How about… diving in Cambodia? Most likely not. While neighboring Thailand is one of the world’s dive training meccas and Vietnam has its own scuba niche, Cambodia’s dive scene has remained noticeably underdeveloped. 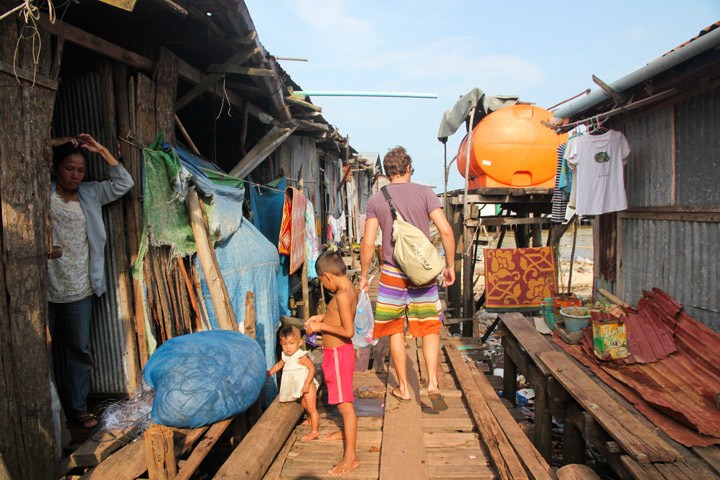 There’s pretty good reasons for that, as most divers aren’t jumping for a chance to take a holiday in a country being run by a homicidal dictator. And while the Khmer Rouge’s rule is long over, the country’s ensuing poverty and low tourism statistics (2.5 million annual visitors compared to Thailand’s nearly 20 million) have kept development low-key.

Still, Sihanoukville now boasts half a dozen dive operators vying to take you out to explore the ocean around the beautiful offshore islands. Unfortunately, this burgeoning dive destination does not have the best reputation. Poor visibility, lack of life due to years of dynamite fishing, and uninspiring topography were the reports I read and heard about diving in Cambodia. Still, there were a few positives: a healthy macro culture of alien-like nudibranches and high chances of seahorse sightings. 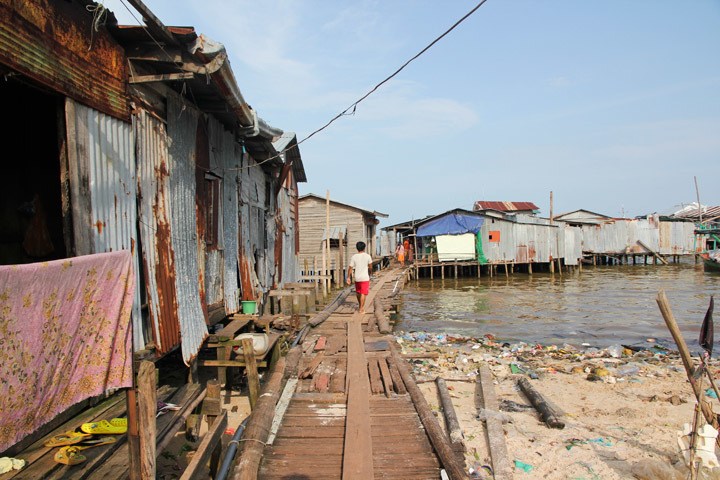 Still, Mark and I are never ones to let a little bad press get in the way of good old fashioned finding it out for ourselves. So after interviewing the many dive shops on the island, we signed up for a two day trip to Koh Rong Samlom (not to be confused with Koh Rong) through Island Divers. We chose very carefully, as many of the shops in Sihanoukville are so-called “cowboy operators” thanks to their shoddy business practices and safety standards. Some have even been expelled from PADI, the international professional dive association. Being miles away from adequate medical facilities, we made sure to choose a dive shop we felt safe with. 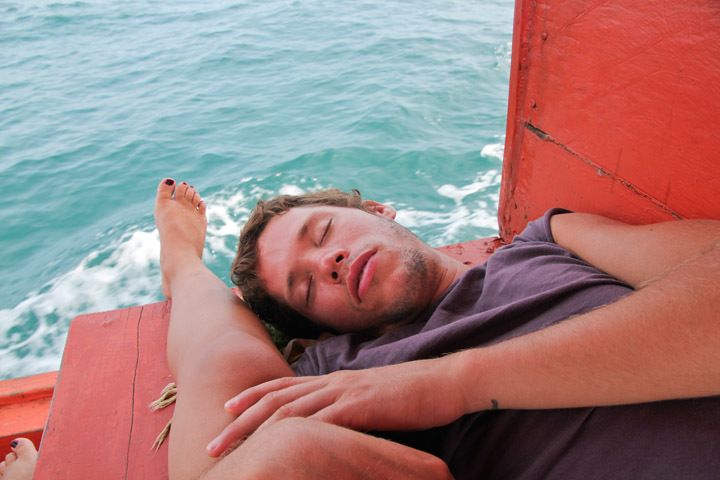 So that is how we found ourselves heading to Sihanoukville’s pier, heading once again to a stunning and remote island. When we arrived and everyone hustled to get on and off the boat, I took a minute to sit on the pier and appreciate what a gorgeous place we were in. We had an afternoon dive, giving us just enough time to explore the island a bit first. 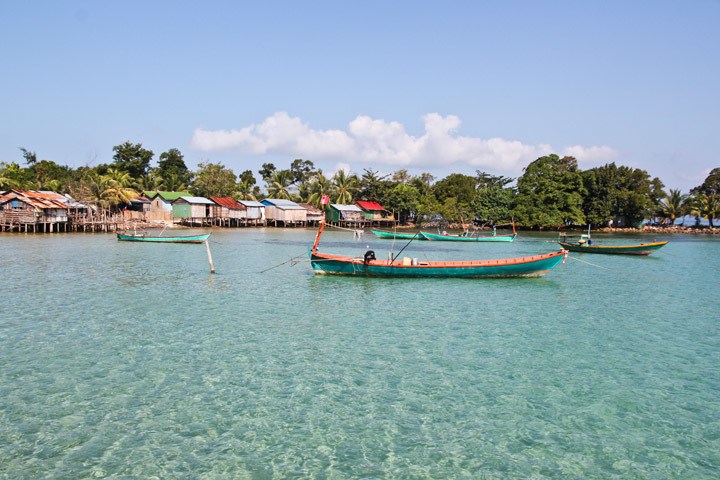 I soon had a new friend join me, working hard to prove that Koh Rong doesn’t have the monopoly on adorable puppies. This little cutie was the apple of his owner’s eye, being lavished with daily baths and treats like Coca Cola and Fanta (probably not veterinary approved). 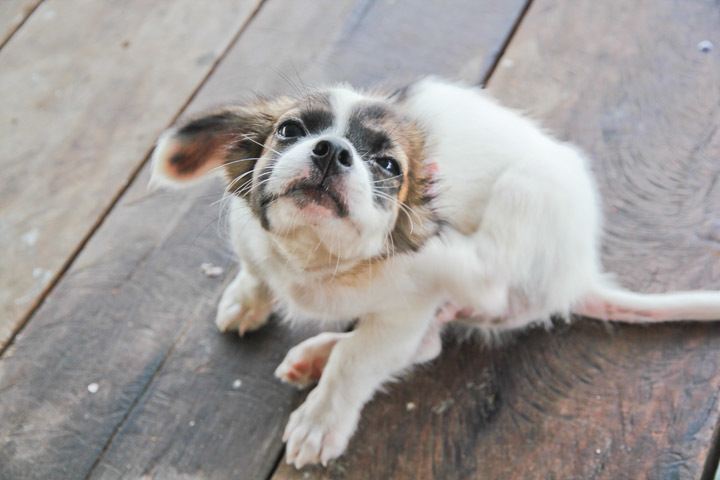 Later I would find the same pup trying to eat a fruit almost the exact size of his body. When he paused for a breather he inadvertently created the most amazing puppy still life that ever existed. 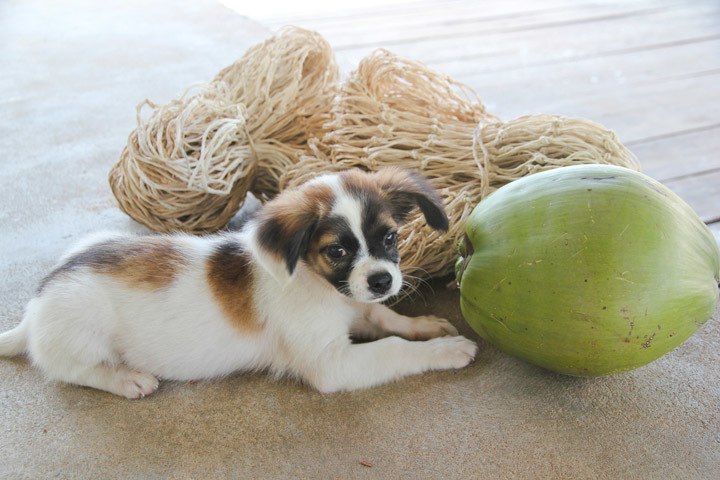 I liked the island immediately. The pier held the dive shop and diver dorms as well as a few other adorable houses like the one pictured below, which is rented to a foreigner working at the local school for a whopping $100 a month. I couldn’t get enough of the cheerful paint job and hanging flower boxes. 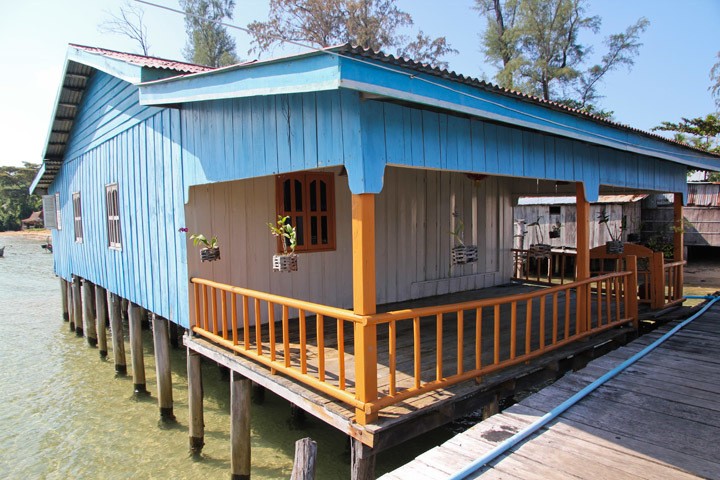 Walking off the pier you head straight into the heart of the very traditional village of the Mai Pei Bei community, where people go about their daily chores of cooking, making wooden crab traps, sewing clothing, and doing washing up. The villagers live harmoniously with the long term conservation project on the island run by Marine Conservation Cambodia. The conservation group recently helped the community gain official village status so that they will not be forced to evacuate now that the island has been sold to developers. 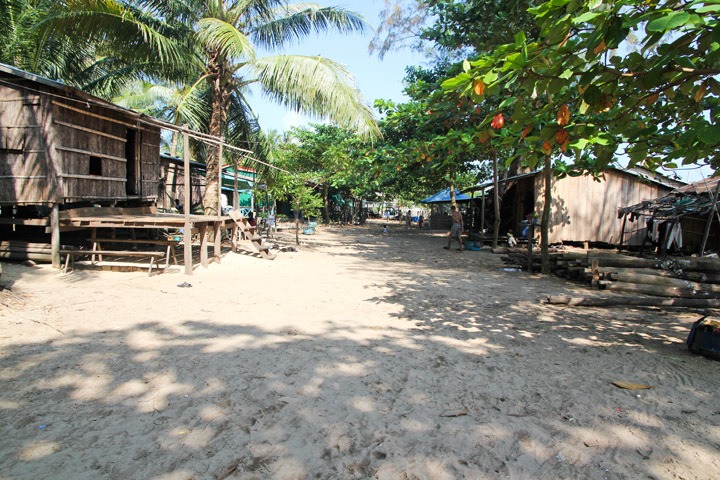 After passing through the village and the conservation group’s site, we walked along a path that would bring us to the beach. Along the way we spotted this fascinating shrine made out of local materials like shells and stalagmites from a cave. 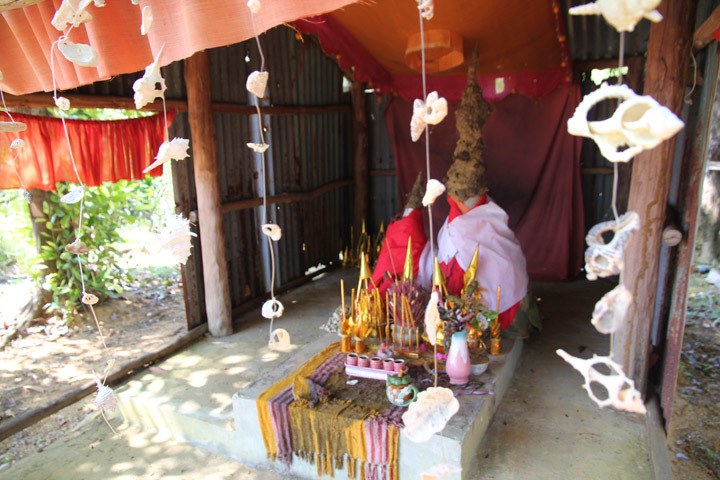 We also came across these hanging flowers and the blooms that had recently fallen off of them. Don’t they look like something out of a Doctor Suess book? 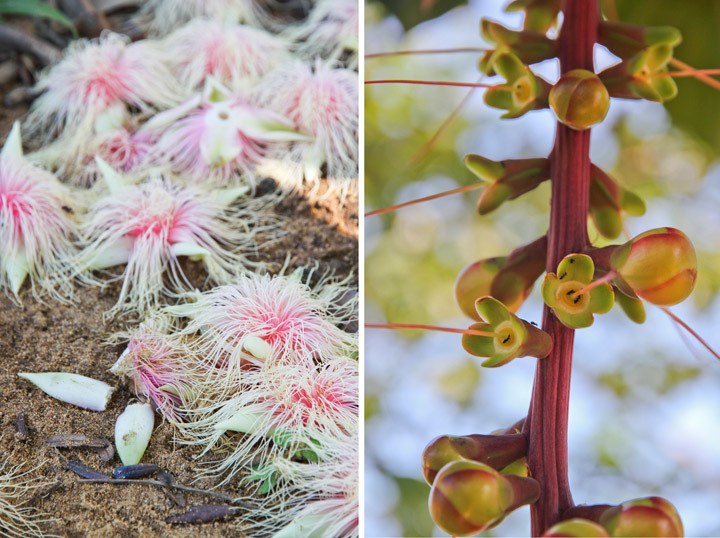 Finally, we reached the beach. Frankly, it couldn’t compete with the white sand beaches on nearby Koh Rong. But this island had the advantage of a greater community feel and peek into traditional life. 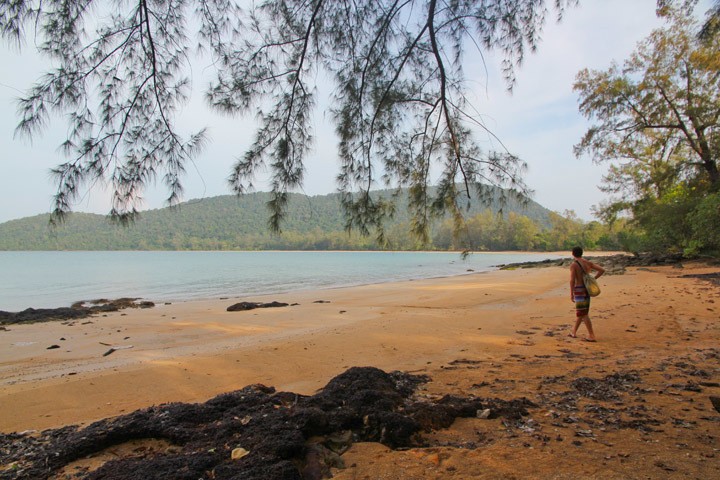 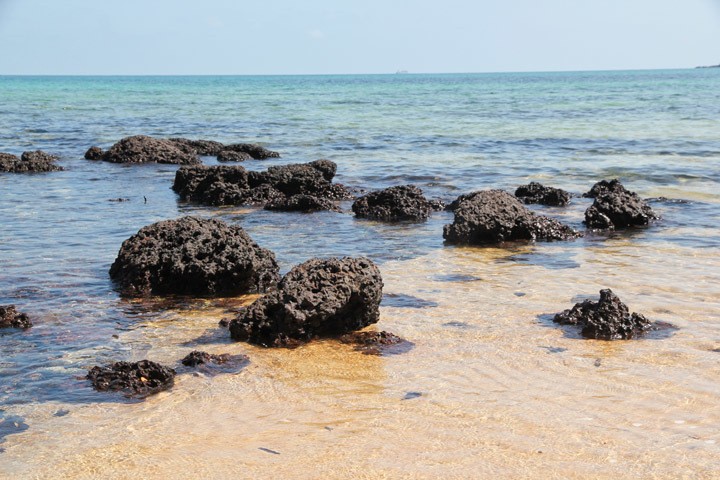 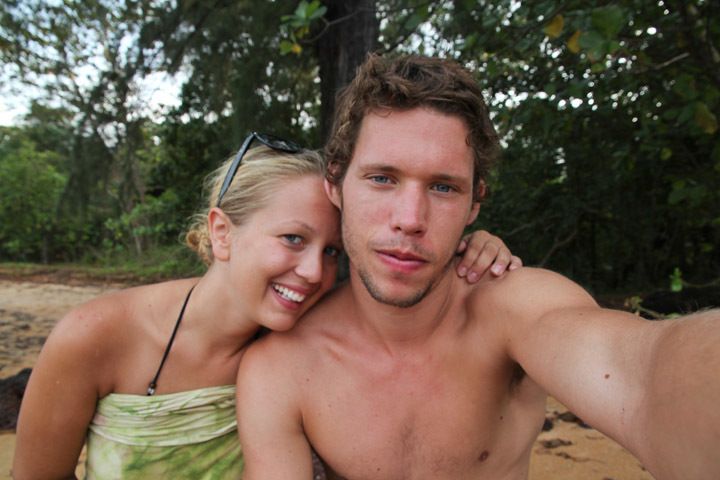 After a simple family style lunch we were off to dive. I felt slightly apprehensive. I love Cambodia so much, I wanted to love it’s diving too. 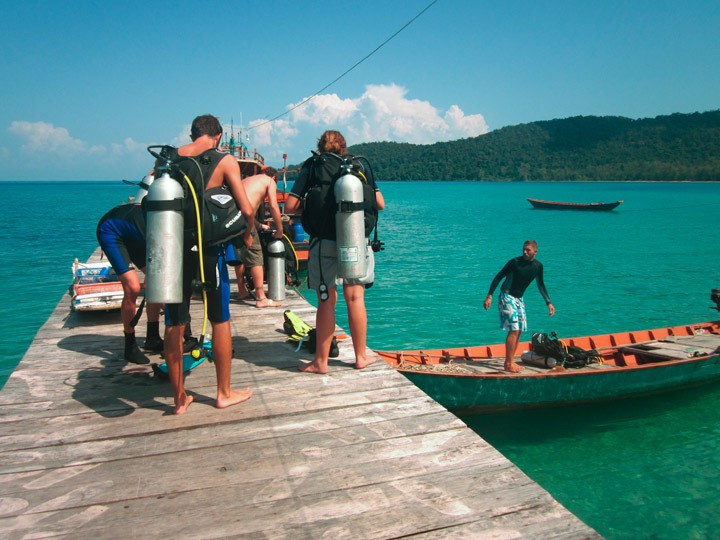 We set off to a nearby shallow dive site called “Back Door.” Right away I could tell this wasn’t going to be a great dive for photography as the visibility was very poor, so I stuck to focusing on macro shots. The following is a type of coral (I believe!) that I had never seen before. 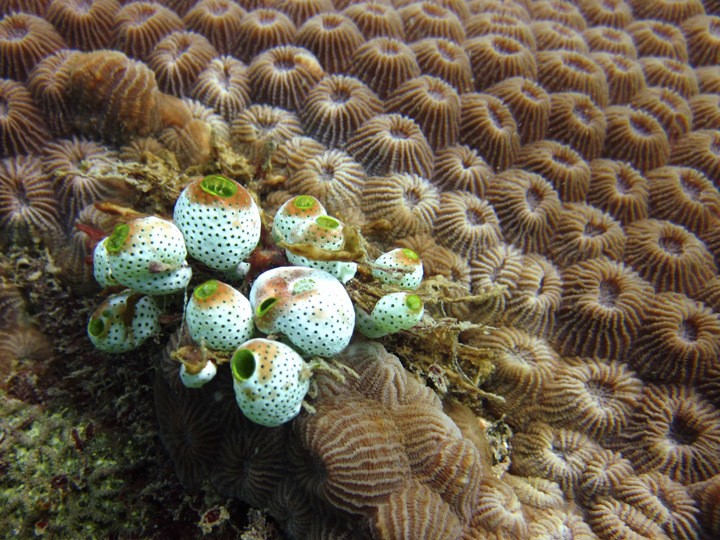 Certain species were thriving here. The black spiny sea urchins were the largest I’ve ever seen and the boring clams (that’s their proper name, not a judgment on their interest levels) were colorful and healthy. 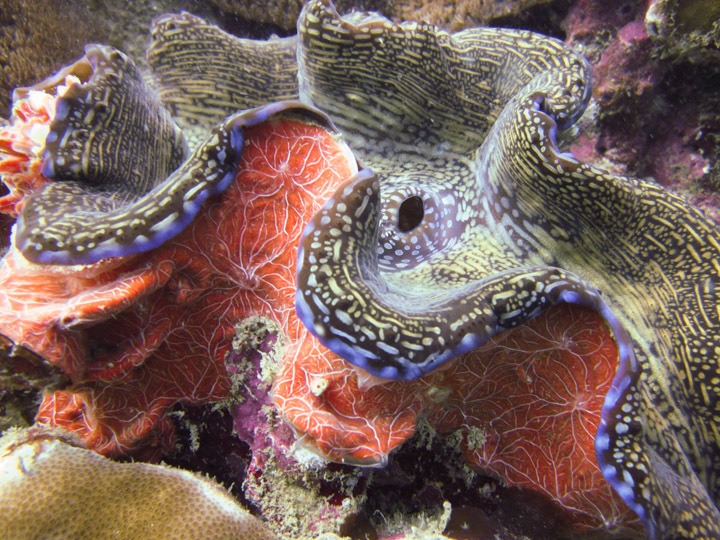 Unfortunately, there was little in the way of fish and other sea creatures. Years of unsustainable fishing practices including dynamite fishing and trawling have left their mark here. 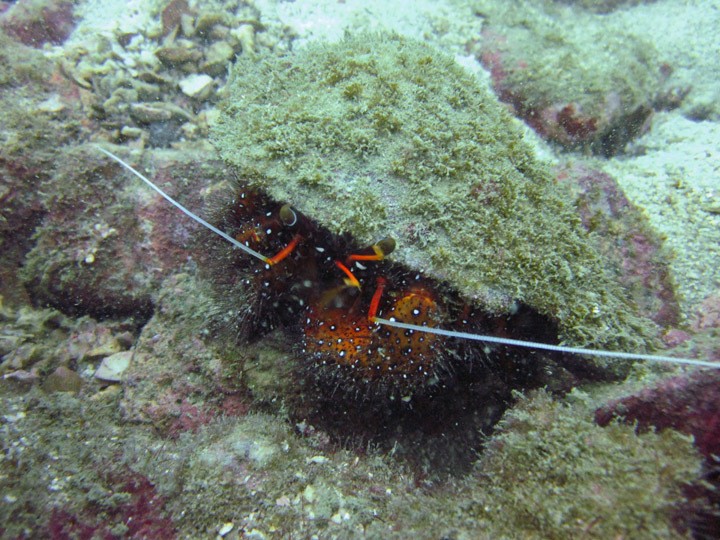 All in all, the divesite was pretty… lackluster. I was starting to wonder if we were crazy for thinking we’d find a hidden gem in diving in Cambodia.

When we came up from the dive one of the divemasters asked us how our dive was and what we had seen, and I struggled to answer politely. Side-note rant: I find it to be incredibly rude when divers come up and trash a place’s diving straight to the faces of the people that have chosen to live and work there, and obviously find something very redeeming about it. You wouldn’t visit someone’s city and talk smack about it right to their face, would you? 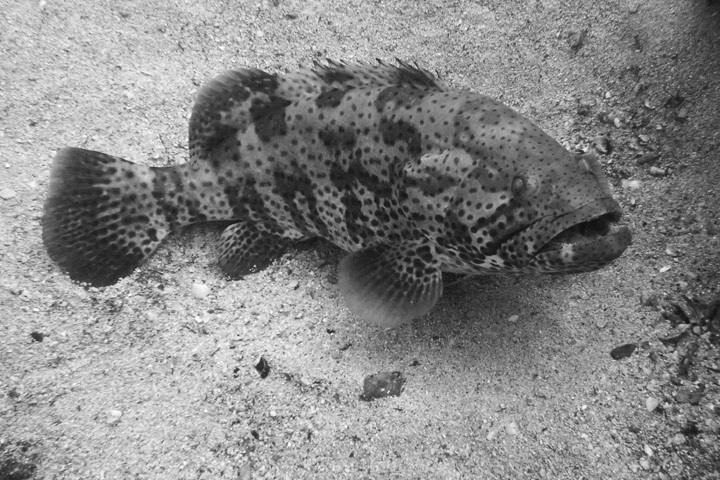 Anyway, we decided to complete our second dive the next day with fresh eyes, and made our way back to the island for a quiet evening under the stars. 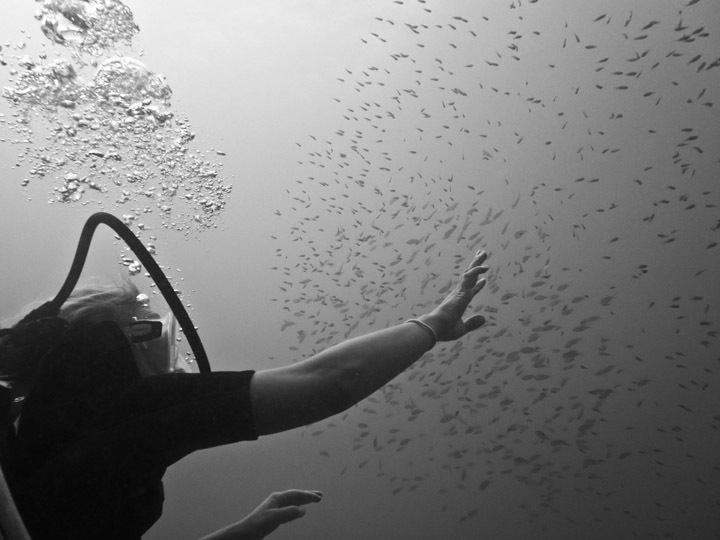 Thankfully, the next day’s diving was going to make a major impression on us…

Did you enjoy this post about diving in Cambodia? It only takes a moment out of your day to share this post on Facebook, Twitter, or Stumble Upon via the icons below, but it helps me immensely to grow this blog. Please consider subscribing via RSS feeder or email through the sign up box in the sidebar. I appreciate it!

When The Traveler Goes To Art School: Sea Snaps

Visitors? Yes Please! Four Reasons I Invited Everyone Along