Lopburi Part I: A Warm Welcome

Departing Ayutthaya I made my way once again to the train station and purchased a 13 baht (just 40 cents!) ticket to my next destination: Lopburi. Lopburi is just two hours north of Ayutthaya and is another city visited frequently by day-trippers from Bangkok or by those traveling north to Chiang Mai. 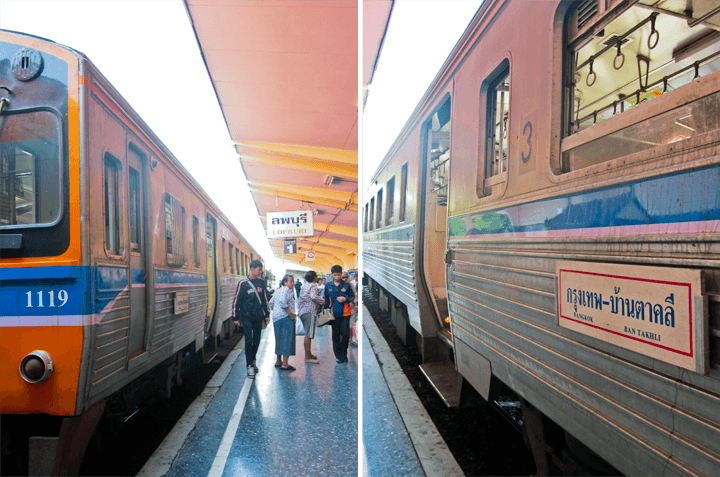 Once again I loved traveling by train! This time there were a few other backpackers in the 3rd-class car and we were all headed to Lopburi. With strength in numbers I felt far less anxious about missing my stop. 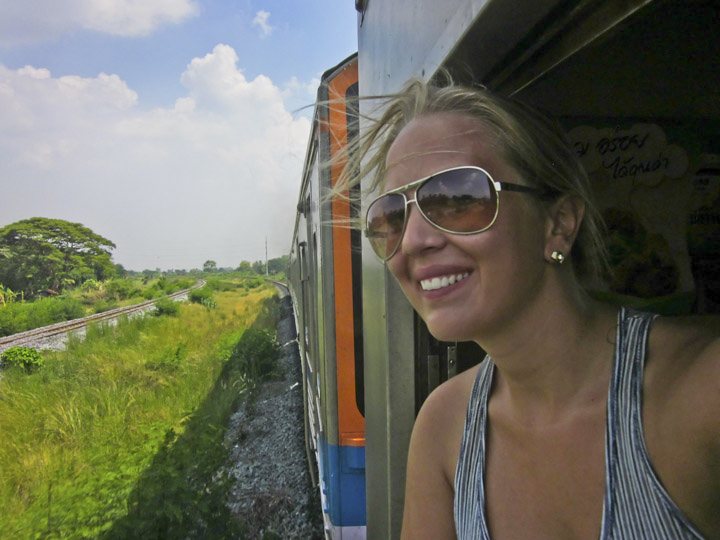 As soon as we arrived at the train station I saw that Lopburi really embraced its claim to tourism fame: its wild monkeys. Yup, I’m willing to bet not one of us travelers would be getting off at this stop were it not for the town’s famous primates. Still, the locals are in the process of trying to diversify the tourism here with growing attractions like rock-climbing and tours to bat caves and Thailand’s largest sunflower fields. 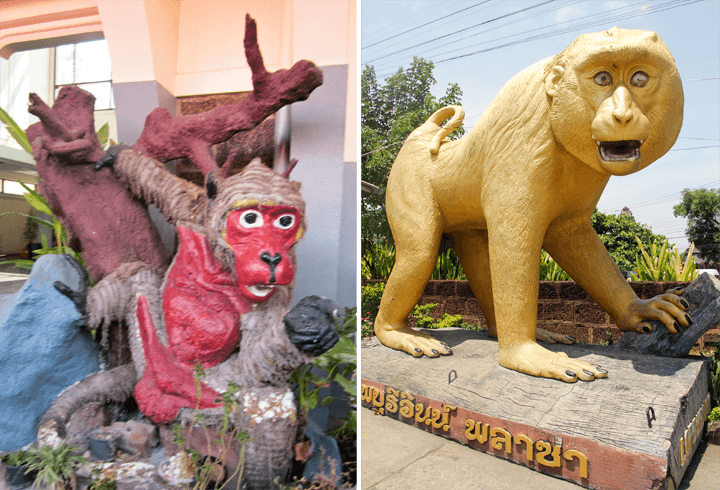 As Lopburi is primarily toured in just a few hours, it really has the smallest collection of accommodation options I have seen anywhere in Thailand. There are a few mid-range hotels outside of town, a handful of fading Chinese-style hotels in the town center, and one simple guesthouse. Luckily that one guesthouse is charming enough to make up for the lack of competition. Welcome to Noom Guesthouse: 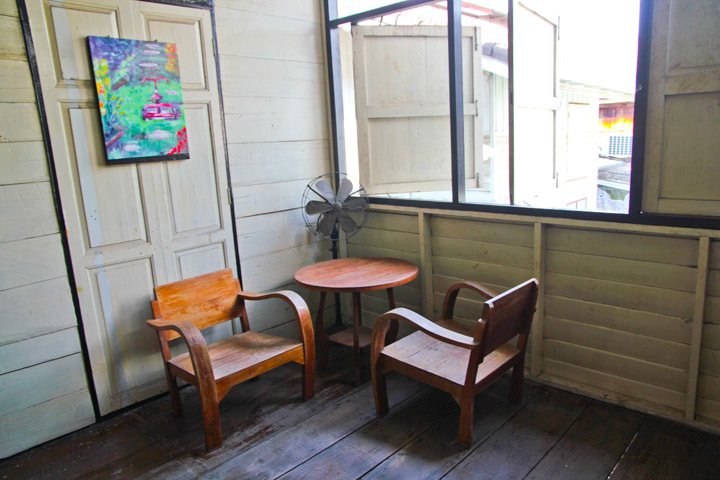 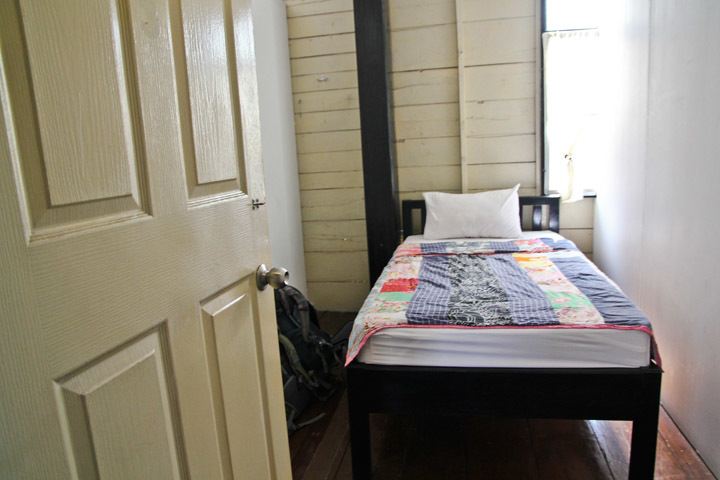 While there were cute bungalows and air-con rooms available, I opted for a 150 baht ($4.75usd) fan room with a shared bath to offset the accommodations splurge I had treated myself to in Ayutthaya. This turned out to be a mistake given that the temperatures were soaring over 100°F during the day and didn’t cool down much at night. I was sleeping pretty badly overall at the time but that night I had some really feverish nightmares that I think were brought on by the heat. The next morning I decided that as I was a non-masochist traveling through Southeast Asia during the hottest month of the year I would treat myself to air conditioning from there forward. 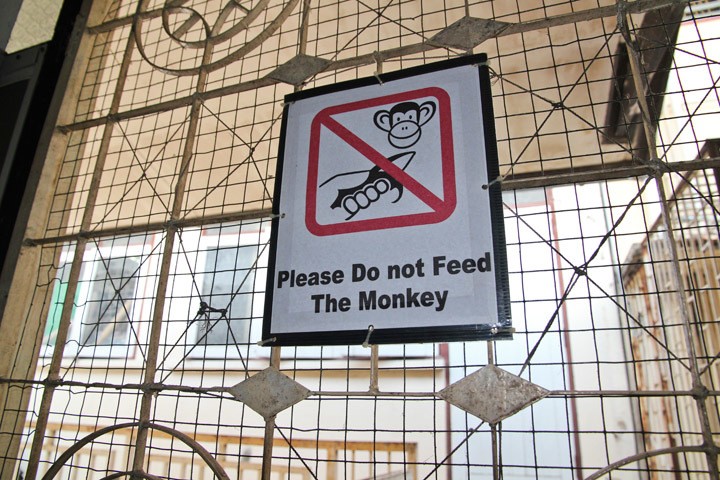 Despite my bad room choice, I loved Noom Guesthouse. Lopburi is a sleepy town throughout the year but as this was low season the place was really dead in the evenings. I found myself spending quite a bit of my two days in Lopburi just sitting on the stoop of Noom’s, hanging out with the family and the band of adorable chihuahuas that clearly thought themselves part of it. 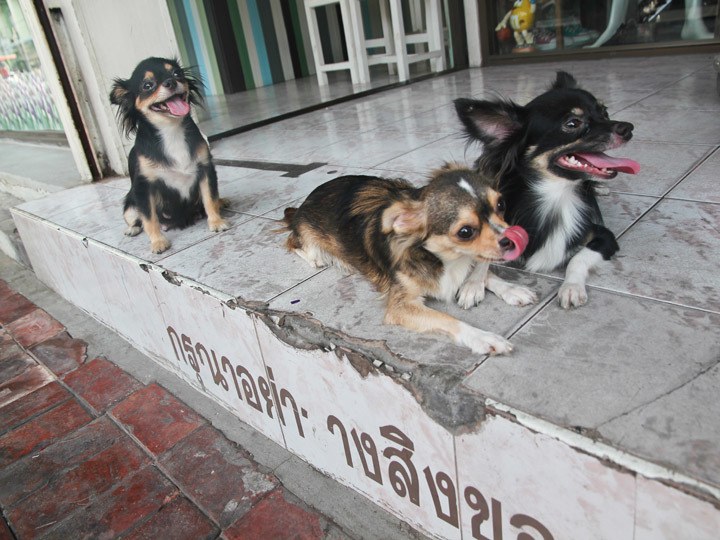 But believe it or not those adorable pups are not the creatures people come to Lopburi to see. Despite the fact that once I arrived and settled in and got some work done the temples were about to close, I wandered out around town in hopes of finding some monkeys. Oh, did I ever find them! 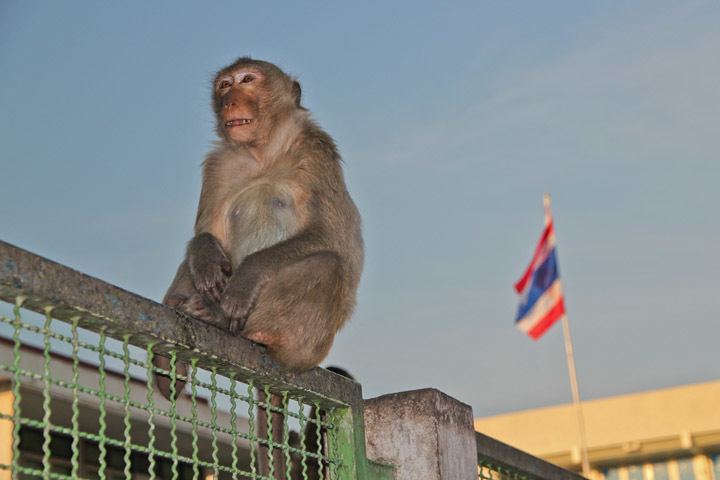 Cutest baby monkey in the universe alert, coming up below left. 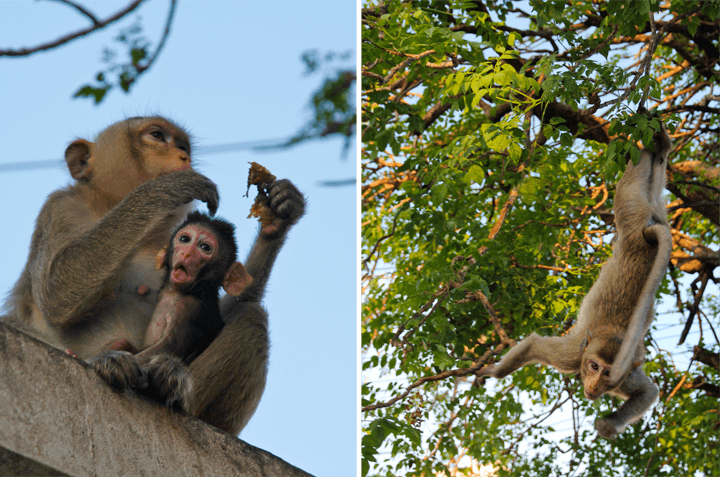 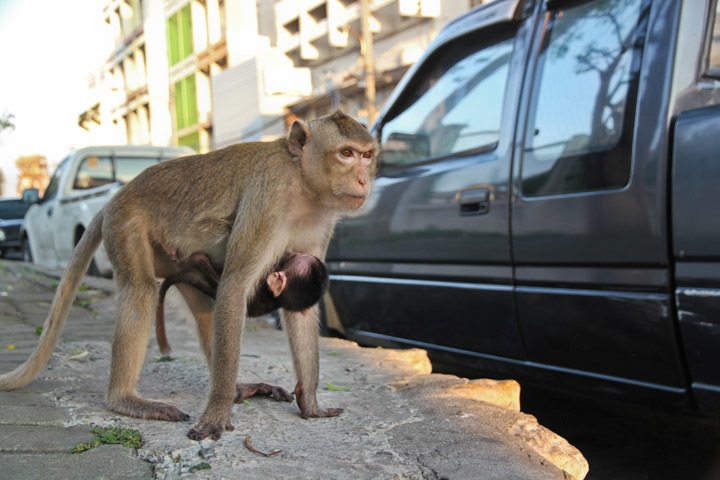 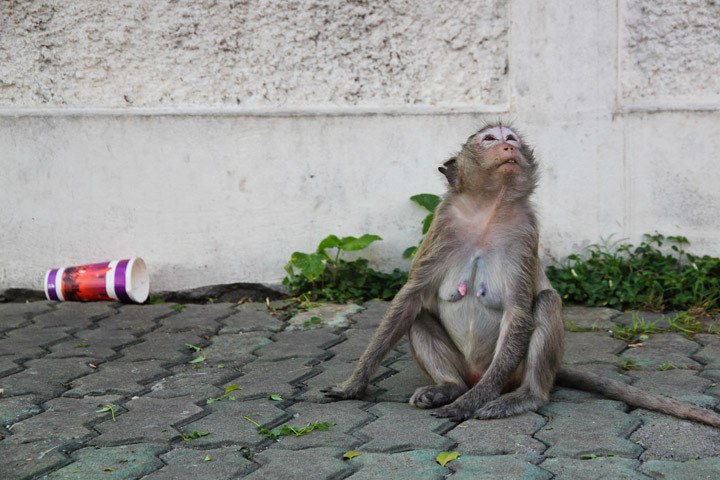 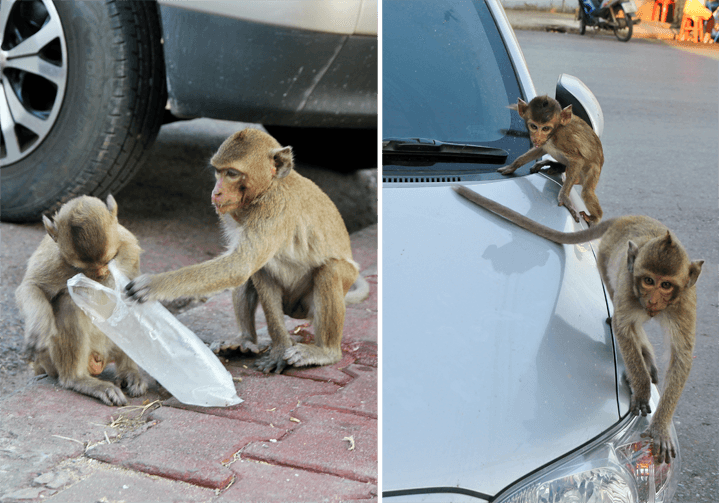 I was absolutely amazed at the number of monkeys crawling the streets of Lopburi. I knew they would be abundant at the temples, but I hadn’t anticipated that they would be everywhere. Swinging from telephone lines, hanging out on fences, clamoring over cars: it was clear who ruled this town. 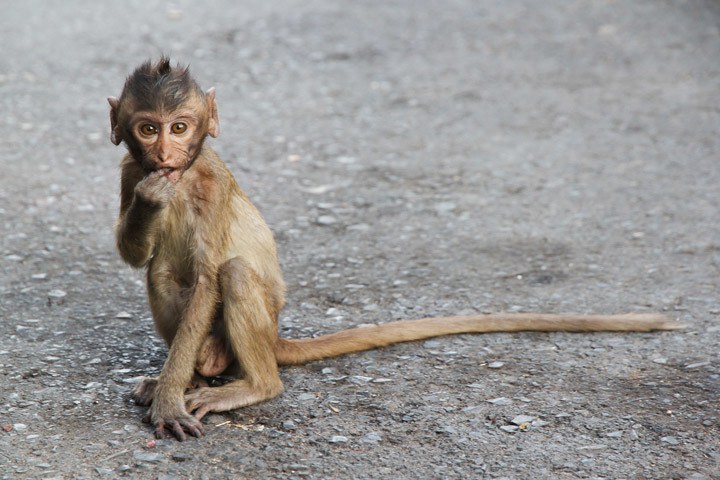 While I knew I wouldn’t be able to actually get in, curiousity got the best of me and I headed over to Prang Sam Yot, or Monkey Central, as its known around… this blog. 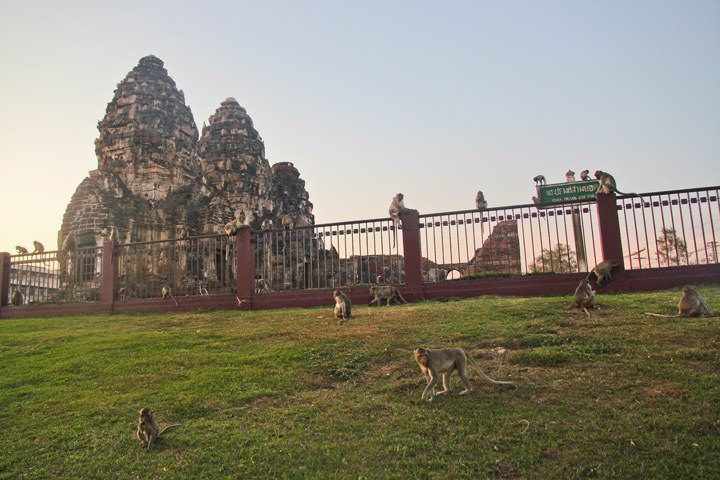 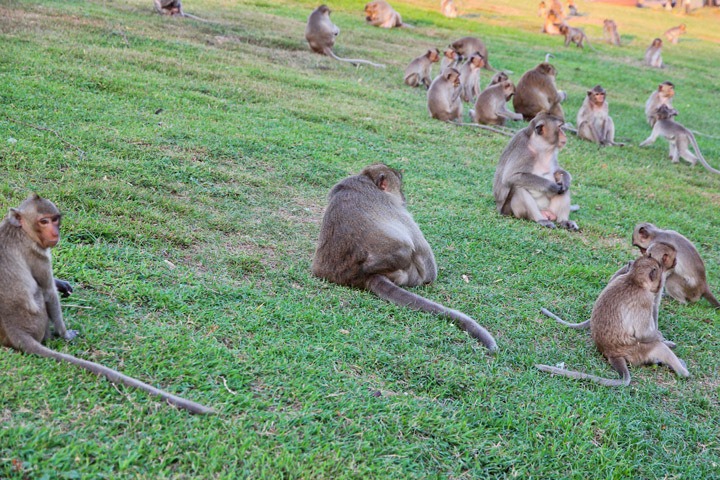 This was clearly home base. Monkeys were everywhere, staring out at traffic, grooming each other, and curiously approaching visitors. In some cases the cheeky guys got a little too curious. I nearly peed myself the first time one of them made a flying leap for my waist and wouldn’t let go!

Believe it or not, I am no stranger to being attacked by our closest relatives in the animal kingdom. When I was about 11 my family visited Spain on my first-ever trip abroad. During said vacation we took a day trip to Gibraltar, a small hotly contested piece of rock currently under British sovereignty. Gibraltar is home to 30,000 people and 300 macaque monkeys who, as you can see from this excerpt from my family photo album, I got quite friendly with on my visit. As you can also see, I was making some pretty amazing hat-related fashion statements at the time. 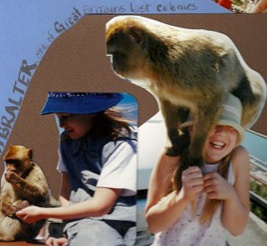 Back in Lopburi, one monkey even managed to grab my lens cap and make off with it. I figured it was gone for good until a local kid ran off with slingshot and shyly returned cap a few moments later. I was a little more careful after that but every time I reached into my purse I would see a few of them perk up and pace towards me, thinking I had food. There was a lot of shrieking and nervous sprinting involved, and the night ended with me furiously typing highly specific phrases like “Lopburi monkey bites RABIES?!?!?!” into Google. Good times.

Still, these monkeys’ bravado did lead to some pretty hilarious photo bombs. This photo was taken one moment: 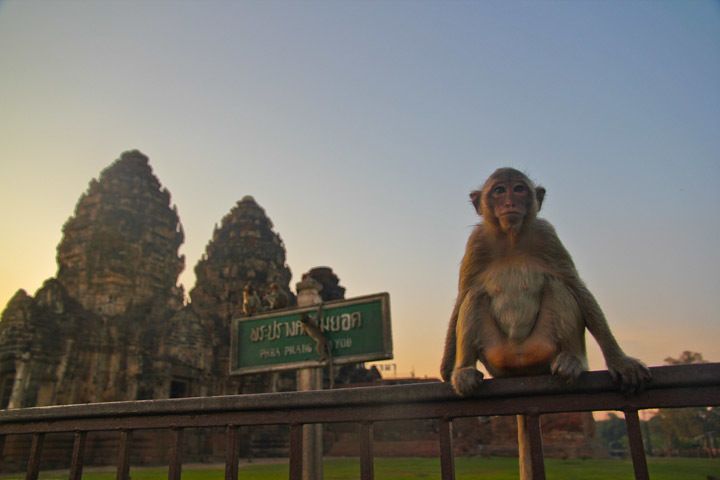 And this was taken the next, when a monkey knocked me off balance by jumping on my shoulder. 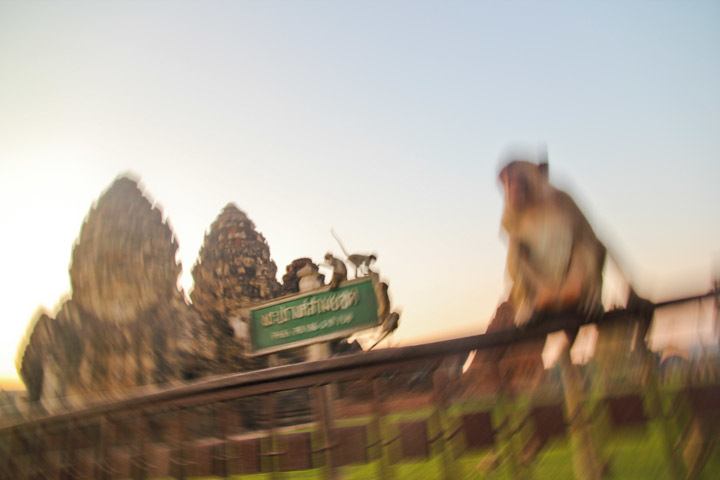 And then this exposure occurred when one little guy seemed jealous that he wasn’t part of my photo shoot:

It was a pretty perfect preview of what was to come. Eventually the monkeys ran me off with their increasingly unwelcome tiny primate hugs, but I still couldn’t wait to return the next day and explore the sights and simians of Lopburi in their full glory. 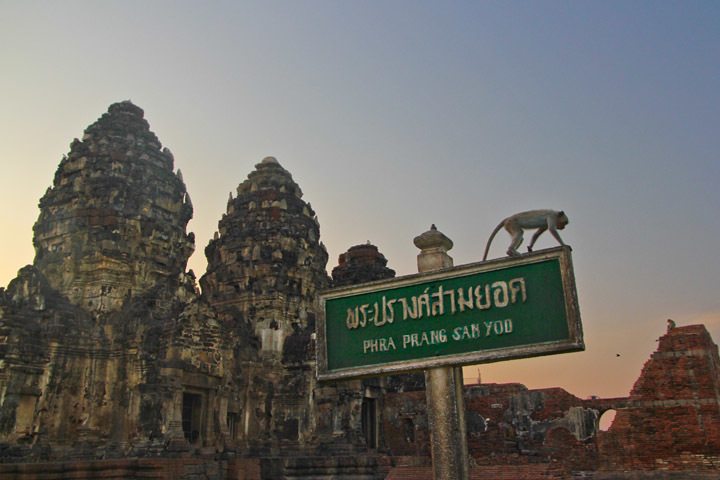