While Lopburi’s top claim to fame may be its cheeky monkeys, a few other tourist draws are beginning to crop up, mainly centered around the town’s beautiful rural surroundings. Rock climbing is a fledgling industry here, especially during the months of November through January when the town’s famous sunflower fields are in bloom. In fact, many of the other travelers I met around town were there not to see primates but to tackle some of the 40 climbing routes on nearby Khao Chin Lae. Curiosity got the best of me and I inquired at my guesthouse about climbing lessons. “Sorry, town instructor on holiday” was the reply I got. Fledgling industry indeed, with only one instructor in town!

As I was vowing to come back some year in November to rock climb my way to amazing views of the flower fields (and conveniently catch the Lopburi Monkey Festival at the same time!) a poster caught my eye. It advertised an evening tour to see the sunflower fields, go swimming at Ang Sub Lek and to visit the famous bat caves at Khao Wong Kot. It departed on request every evening from Noom Guesthouse (tour time 4:30pm-7:30pm for those interested), however pricing varied wildly based on how many people attended. A tour for one was pretty steep at 600 baht ($19) while for three people the price dropped to a reasonable $250 baht ($8) per person. Luckily that day I had ran into two of the boys I met on my sunset boat trip in Ayutthaya, and I dialed them up to see if they were interested. They were, and not too long later a fancy SUV swung by to pick us up. 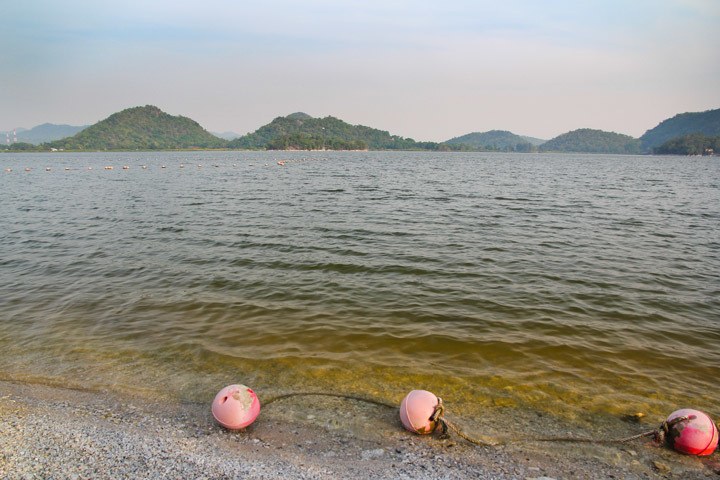 As we were visiting in April, the sunflowers were not in bloom and so our first stop was the lake. I was so looking forward to cooling off after spending the day sightseeing in 98°F heat! However, when we arrived we realized this was a very popular spot with locals, who were swimming in typical Southeast Asian style- in shorts and t-shirts. Thoughtlessly I had only brought along a skimpy bikini, and while I considered jumping in wearing my clothes, I had nothing to change into after. So I weighed the discomfort of the heat versus the discomfort of flashing far too much skin and offending locals and decided to stay dry. 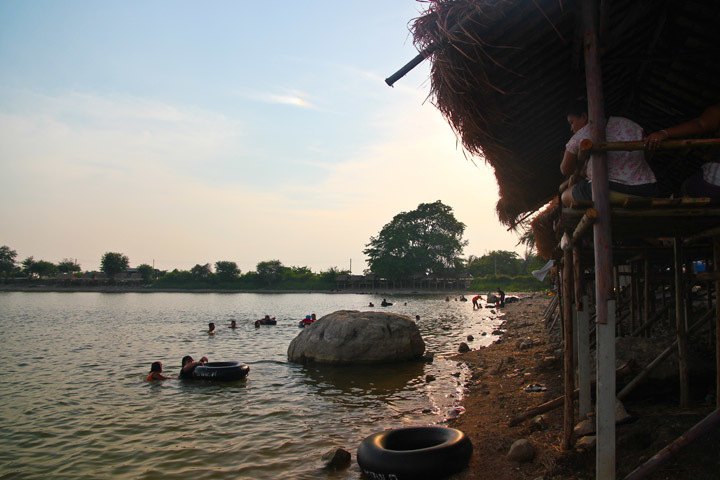 Still, we ordered some drinks, joined the picknicking families sitting in the bamboo flats over the lake, and soaked up the atmosphere. It was nice to be out around nature, and to see where the locals go to relax and unwind. 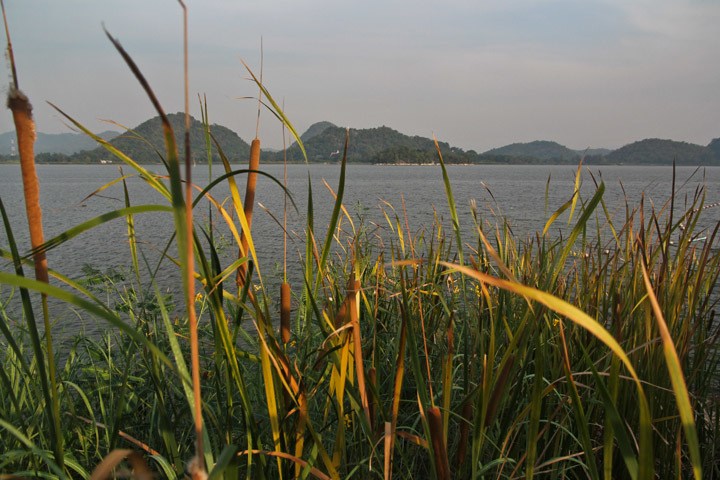 Afterwards we piled back into the SUV and wound around the mountains en route to the bat caves. We were passing amazing views and beautiful temples and I felt some frustration that I was on a tour. In the past this is something that Mark and I would have done by renting a motorcycle and going off on our own, but I don’t feel comfortable enough as a driver to take on a rental bike or as a single woman to go off into the rural outskirts of town alone (I realize plenty of solo traveling woman go to rural areas on a regular basis, I just wasn’t at that stage yet). 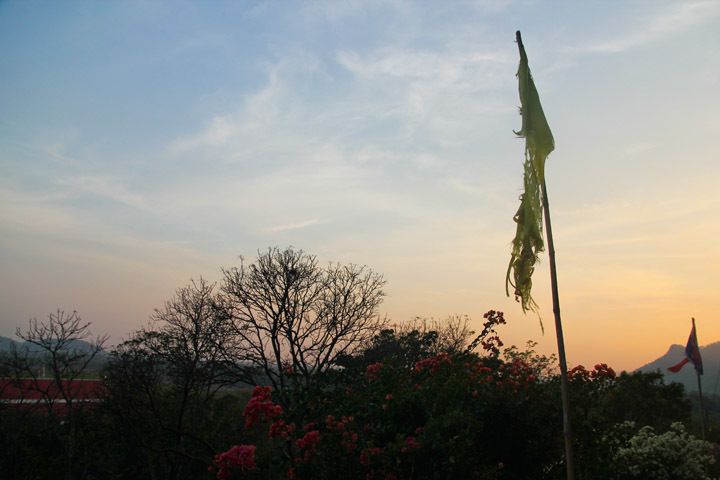 But by the time we arrived at the caves my new travel buddies had me laughing again at ridiculous stories and bad jokes, and I realized that everything has a trade-off; had I been exploring from the backseat of a bike I would not have met these two new Dutch friends who were so kindly joined me on this tour. 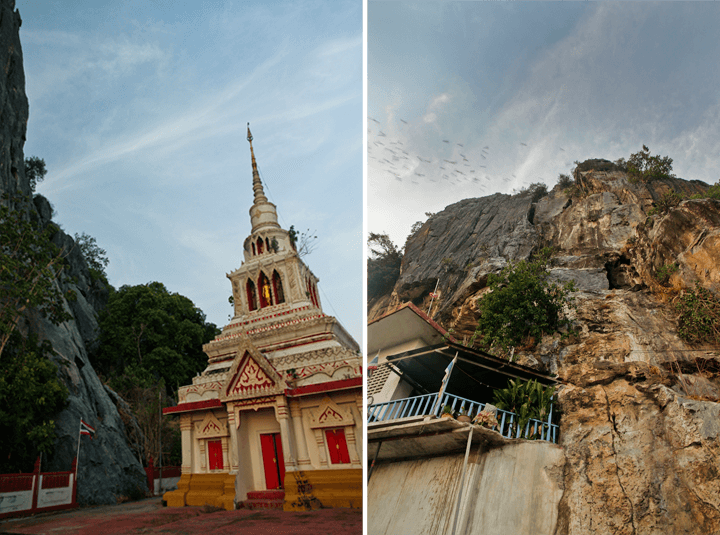 The sky grew more dusky and we looked around at the bat-less sky. They coming, our driver said with a toothy smile. And suddenly, they did. Slowly and sporadically at first; growing steadily to a thick, screeching stream. 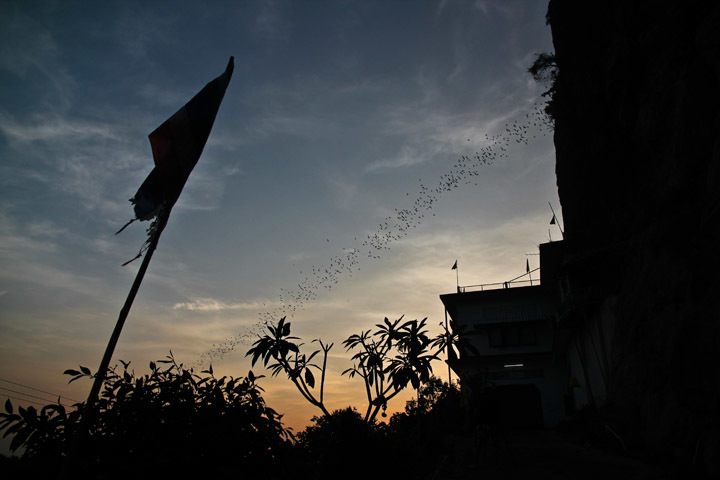 We watched in awe as they shot out from a tiny crevasse above us, forming ribbons in the sky as far as we could see. 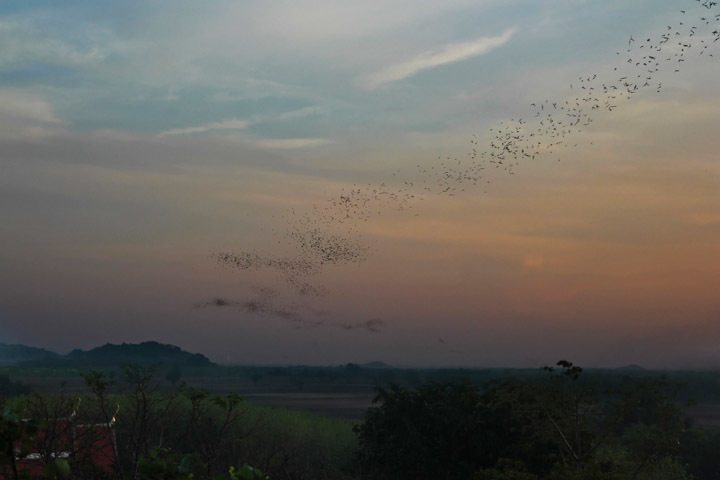 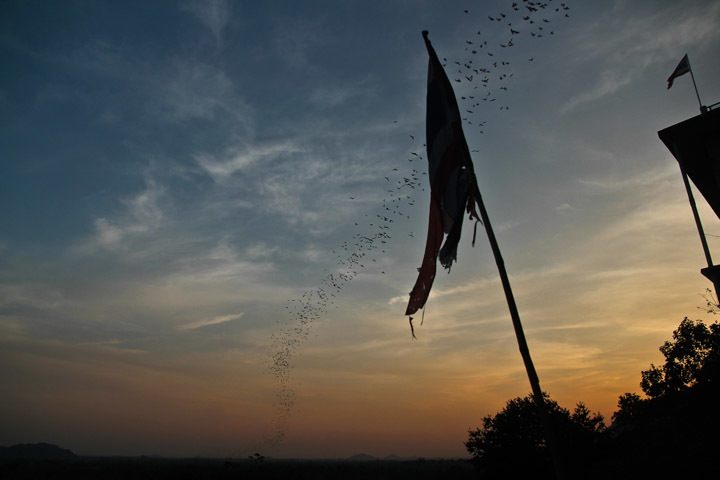 If I do say so myself, I shot some pretty cool little video clips which I then edited into this 48 second video for you:

On the way back we were blown away by the views of the sun setting over the mountains, and our driver kindly stopped so that we could take photos. I’ve seen a lot of beautiful sunsets this year, and this one definitely makes the finals. 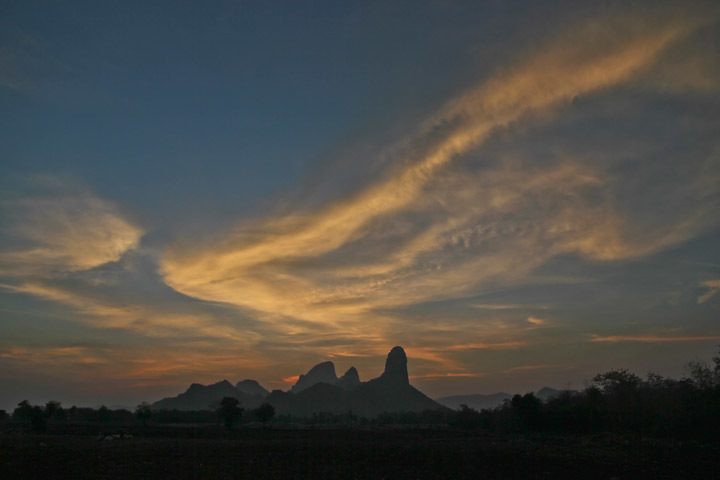 I can’t believe how much I had enjoyed my two days in Lopburi. I came for the monkeys, but I left with an appreciation of just how much this town has to offer, from warm hospitality to an interesting to museum to an amazing natural wonder to yes, those furry little friends of mine. 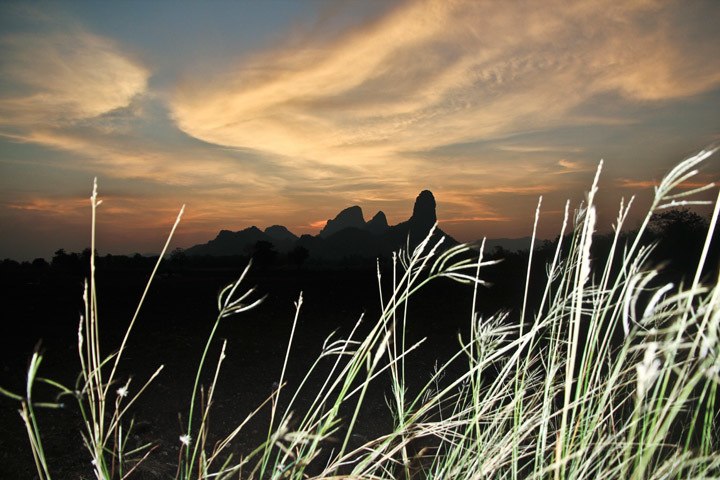 That evening I would take the night train all the way to Chiang Mai, where I would meet up with some friends to explore Thailand’s second most famous city…