The Problem with Puerto Viejo

“Well, we’ve got three months for Central America which should be okay as we’re only spending a week in Costa Rica.”

“You’re going to Costa Rica?! I guess you really hate your money.”

From Peru to Panama we met backpackers warning us against the budget-wrecking horrors of Costa Rica. Had we made a drinking game out of taking a shot every time we heard a traveler mention it, I don’t think we would have remembered what sober felt like for a few months — that’s how ubiquitous a topic it was among the Latin America hostel set. Pretty much every time, I rolled my eyes discretely to Anders. I mean, come on. I quit the cheaplympics. And I’ve been to Costa Rica before, when I did a student exchange in high school — didn’t they know how awesome a country it is?

And then we arrived in Puerto Viejo. 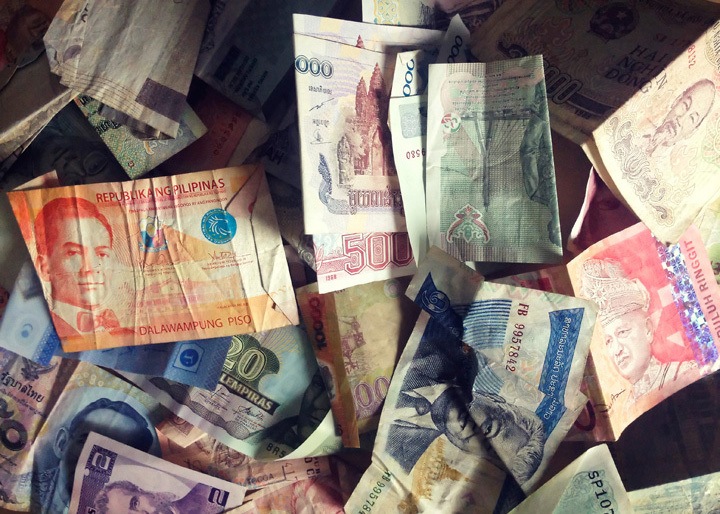 There must be some colones in there…

This charming beach town just over the border from Bocas del Toro, Panama, would fit many people’s definition of paradise. It certainly fit mine — except in my perfect Eden, small bottles of water don’t cost $2.50! In comparison, a water that size would cost 30-50 cents in Peru. Unfortunately, drinking tap water isn’t an option in Puerto Viejo, and even simply refilling our reusable bottles at our hostel set us back a dollar each. Ouch. In Bocas del Toro, where tap water is also a no go, it cost just 30 cents to fill both our water bottles at a refill station. And that’s the cheapest form of hydration — I paid $3 for a small smoothie at a roadside shack, double what I’d paid the day before in Panama.

In Ecuador, buses are about a buck an hour. In Costa Rica, it’s three times that price. We met a couple who told us their bill for a pizza and two sodas in came to almost forty dollars. When I went to drop off our very small load of laundry in Puerto Viejo, I almost fell over at the $10 bill — $4 per kilo! We had been paying a third of that for the past five months. Granted, we could wash our own clothes and those people could cook at their hostel — but those are just examples to show the disparity between Costa Rica and the other countries we visited as part of this trip. I was starting to see how Costa Rica earned its nickname as the Switzerland of the Americas, and why so many backpackers see it as little more than an extremely expensive transit hub between Nicaragua and Panama.

Why is Costa Rica so expensive compared to its neighbors? A common theory is that the country’s popularity among wealthy North American travelers and retirees has driven up prices. But when I spoke to my Tica friends, my hosts from my first trip to the country more than six years ago, they assured me it was much more complicated than that — and that locals were suffering from the price bumps, too.

I am so grateful for the time I spent in Costa Rica back in 2007, and all I was able to see and experience back then. But would I replicate it again today, on my own and at the current prices? Probably not. Other countries in the region simply offer too competitive a value.

All that said, I still wouldn’t recommend skipping Costa Rica entirely. The idea of seeing a country only through a bus window pains me! Costa Rica is a beautiful country with lovely people and a lot to offer, and I’d encourage travelers overlanding through the region to pick at least one destination in the country they really want to see — for me, it was Puerto Viejo. But aside from the usual money-saving methods (take mass transit, eat local, stay in hostels) I would recommend a few Costa Rica-specific tips.

• Avoid alcohol, which is very pricey there, and save the partying for your next pit stop.

• Avoiding buying toiletries and other essentials in Costa Rica — try to stock up before you arrive.

• Think very carefully about activities. Pretty much every activity we saw on offer (whitewater rafting, ziplining, surfing) we had done for a fraction of the price at no discernible value difference in neighboring countries. However, there are exceptions. While our horseback riding experience was much pricier than ones on offer in other destinations, it was an incredibly unique and was a higher value than we could have found in, say, Ecuador.

• Don’t forget to budget $30 for the exit fee if you are flying out of the country.

• If you’re only there a week or so, resist doing laundry until after you’ve crossed the border — you’ll pay a fraction of the price.

For those who are reading this and thinking how high those prices seem, rest assured there are travelers who manage to travel Costa Rica on a budget. For a few examples, check out spending breakdowns from Expert Vagabond, Globetrotter Girls, and Nomadic Matt. For those that are reading this and thinking I’m being cheap, well, I’m not afraid to open my wallet when I travel. But if I can have a comparable experience for a fraction of the price by hopping a border, I’m going to do it — and I’m going to save the big bucks for when I’m traveling Europe or Australia. As a long-term traveler, I have to be strategic about where I spend my time and money.

I truly do love Costa Rica — Puerto Viejo was one of my favorite destinations on this trip! — and I’m sure I’ll be back again someday to visit my friends there. But on thing will be different — I’ll never roll my eyes at those complaining backpackers again.

Have you been to Costa Rica lately? Were you surprised like I was by the prices?

My Travel and Blogaversary: Year Three