My First Day at Stingray City

I was already feeling insecure about forgetting my rash vest as we approached the private charter boat. It’s fine, I told myself, everyone is going to be in a bathing suit. Then I saw the BYU t shirt. And the 12 adults were all siblings. Great. Mormons. I was not dressed conservatively enough for Mormons.

Mark and I both have the privilege of occasionally working at Sting Ray City, in my opinion Grand Cayman’s greatest attraction. This was my first day. I knew about SRC and had seen the photos but I admit I had a hard time concealing my excitement while trying to act professional as dark circles swarmed in the water. Everyone started to get ready to jump in, but I hung back. Heather, the photographer I’m working with, wore a rash vest, and all the Mormons wore one piece bathing suits. With tops over them. Sigh. I quickly got over my newfound modesty and jumped in the water, my feelings of discomfort replaced by giddiness. Giant stingrays come straight at you, brushing up against you, nudging you in pursuit of squid. As a serious animal lover I could not get enough! Its like a petting zoo, but there’s no cages and you’re in the Caribbean sea.

Of course my embarrassment was not over yet as I proceeded to have a full conversation with someone I thought to be a stranger before realizing that not only had we met the night I arrived but he was the roommate of some of Mark’s best friends on island.  My first experience with small island syndrome! Once all the squid was gone other boats, several times larger than ours and filled with screaming cruise shippers arrived and the stingrays swam off. We then moved on to our next stop, snorkeling at a nearby barrier reef, somewhat blah except for a great resident moray eel who I think makes to stop worth it.

So despite seriously mortifying myself in both the wardrobe and human interaction departments, I spent the rest of the day giddy at the whole experience, of being so close to such amazing animals and getting ready to learn a new trade. Stingray City, I’ll see you next week. 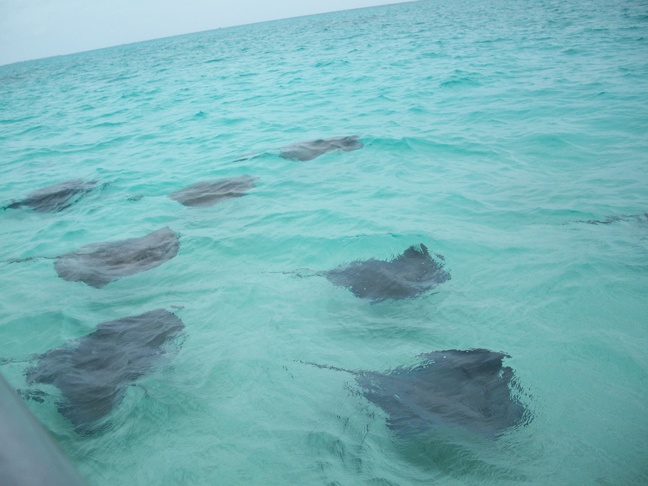 Visitors? Yes Please! Four Reasons I Invited Everyone Along

Earning Abroad: Owning a Photography Business in the Cayman Islands