Lead the Way: A Review of the Sygic Navigation App

I’m the kind of driver who uses Google Maps to navigate around my hometown. I have a poor sense of direction and never quite trust myself that I know the best route. Having just arrived in Malta with a rental car generously provided by the MTA, you can only imagine how overwhelmed I was at the idea of not just driving on the left alongside reportedly erratic drivers, but also navigating sans technology. I was getting so stressed at the thought I briefly considered turning down the rental car and getting around by bus instead! But in what I can only describe as divine intervention, I was saved from inevitable roadside meltdowns by Sygic Navigation, who contacted me about testing their offline GPS system app. Um, yes please.

Sygic works by downloading and storing maps on your smartphone for offline use — so you can have a fully functioning GPS with no internet connection. When I started researching the app for this review, I grew more and more surprised I had never heard of it before. Launched in 2004, it didn’t take long for Sygic to become the most downloaded offline navigation app of all times with over 30 million unique users! And I was about to become one of them. 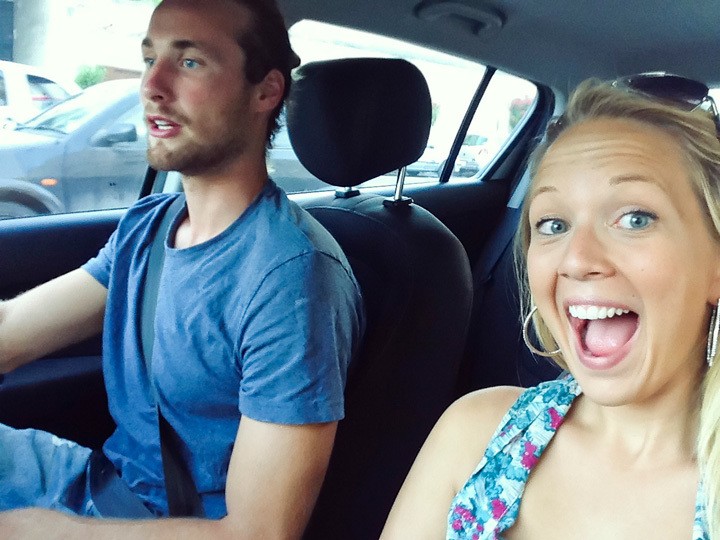 Shotgun selfies made possible by Sygic

Free map updates are available several times a year, and unless otherwise noted, the app license lasts for life. The main screen display shows the route ahead, the local speed limit and your own speed, the distance and time until destination, and your expected arrival time. Some of my favorite features include an alert that beeps when you’ve topped the local speed limit, and a warning when there is a speed camera ahead (a common problem in Europe!) This app is truly global — directions are available in ten languages.

I also loved that you can drag and drop the route easily, which came in handy when I occasionally couldn’t get the app to register my destination (see below). You can also plan multi-stop routes and plan to avoid tolls and highways. Quick links allow easy access to the nearest parking and petrol stations. 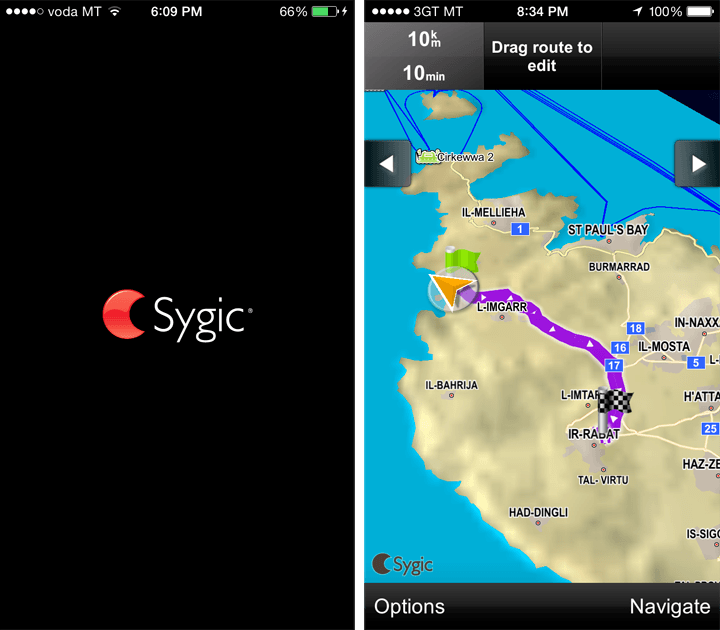 There are also premium features you can upgrade to for a fee:

• Heads up Navigation: This is by far my favorite premium feature of the app. Anyone who has tried to juggle keeping their eyes on the road and reading their GPS will appreciate it — you can lie your phone down on your dashboard and the directions and route are projected onto the windshield in front of you! So clever.

• Celebrity Voices: I laughed when I saw the option to upgrade to celebrity voices. While I’m not a huge Simpsons fan I think it would be kind of fun to have Snoop Dog guiding me around Europe.

• Premium Speed Cameras: For an additional monthly fee the app can warn you whenever a new speed trap appears on your route. This unfortunately also requires internet connection, because it would be a fabulous feature for someone like me who has a penchant for racking up tickets.

Because of its numerous features, Sygic has a complex navigation system. While it took a bit of getting used to, it’s intuitive enough. The maps for Malta were basic and not the fancy 3D ones advertised by the app, but that may be because it’s a less visited destination. 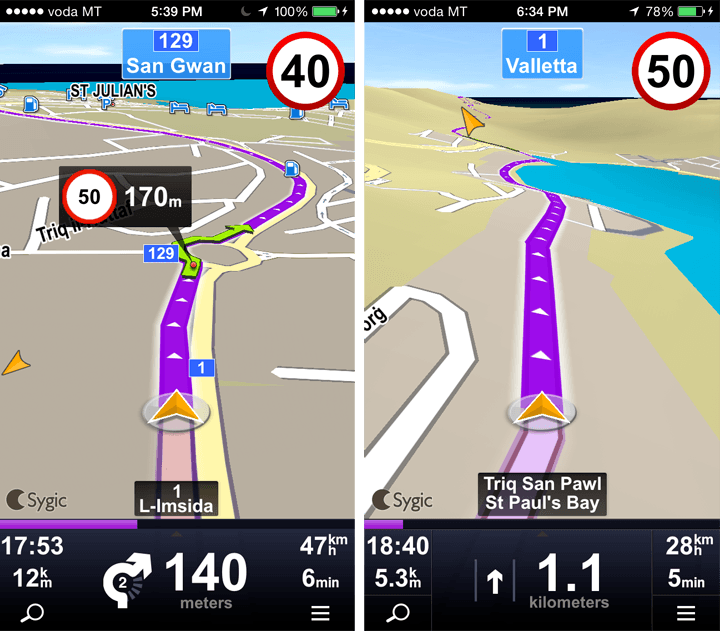 You can download by continent, by country or by the whole world. Some example prices are below, and reflect the current summer sale of 40% off (plus free Heads Up Display for Android!)

You can also take advantage of several upgrade options. 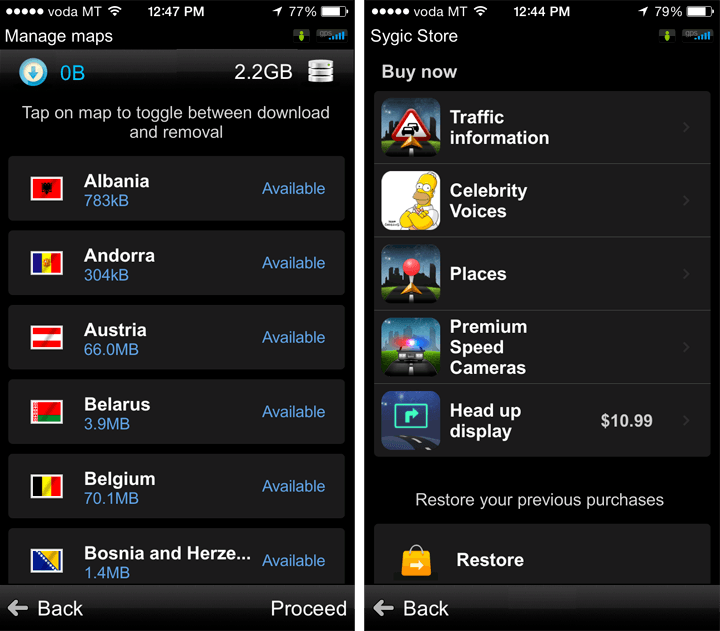 I did occasionally run into some bugs using Sygic. Sometimes the app’s speed limit didn’t match what was posted on the road, and once I got an error message when I tried to navigate to somewhere I’d been before.

The biggest issue I encountered, however, was that often the search function didn’t turn up the destination I was looking for, even when it was something basic like a post office or a beach that I could clearly see when I searched the map manually. It was simple enough to work around this in most cases — in the beach example, I manually selected the road closest to the beach and had the app navigate to that road. However, if I had been totally offline I wouldn’t have been able to find the post office that was right around the corner from me.

Also, note that like any navigation app this one does use a heavy amount of battery, however I planned ahead and had no issues — I slapped my Mophie battery case on my phone and brought along one of those $5 cheapie car chargers that plugs into the cigarette lighter as well.

Without question, this app has vastly improved my time in Europe. Being able to remove the stress of getting lost from the equation while driving around Malta and knowing I’ll be able to find my way around by foot in Belgium has been an absolute weight lifted off my shoulders. There are certainly a few bugs and limitations to this app that I hope they’ll keep improving, but in the meantime having an offline GPS and map system is a new must for me in my international travels, especially when I’ll be driving a rental car. This one was kind of a game changer for me. 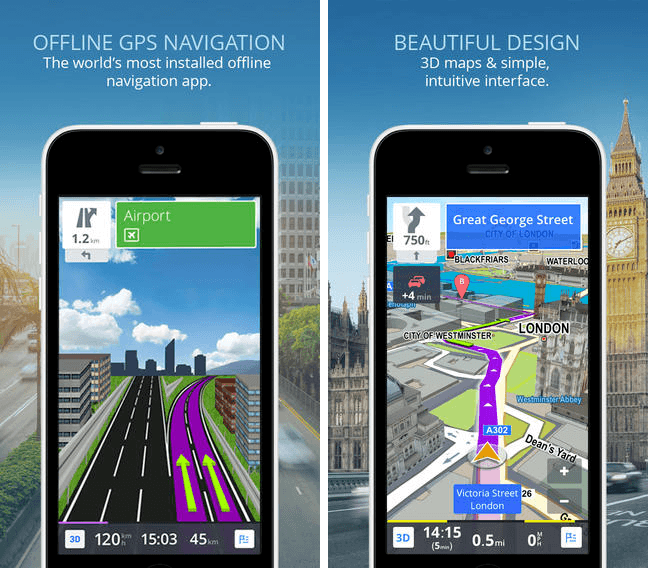 How do you navigate — especially on the road — when you’re traveling abroad?

Download Sygic on your Android and on your iPhone. I was provided with a free access code in order to test this app and compensated for my time in doing so. Find more travel app reviews here!

On Trover, and Travel Planning, And Where to Go Next

Planning a Trip with the Pinterest of Iceland: A Review of Travelade

Taking a Bite Out of Maui Catching Waves with Maui Surfer Girls
72 Comments...