Can an App Keep You Safe? A Review of React Mobile

I get invited to review a lot of apps and services. Most of them I turn down, and some I accept because they seem like fun and a good fit. This one, I accepted for a different reason entirely — I think React Mobile could be a really powerful tool to help keep travelers feeling safe and empowered in potentially unsafe situations. This safety alert app for the iPhone which can provide peace of mind to both travelers and their loved ones. 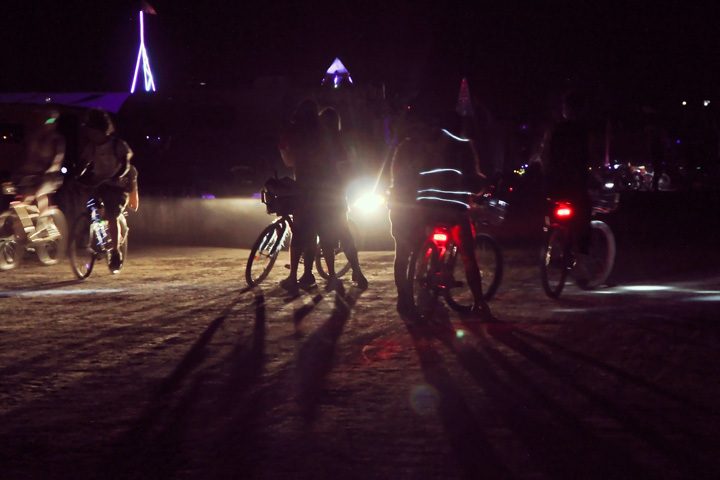 React Mobile has simple and intuitive navigation — a must in a situation where you would feel uncomfortable and want to use the app. However, navigational icons are noticeably pixelated — a gripe from my graphic designer side.

There are two levels of protection with React Mobile.

“Follow Me” is the app’s built-in GPS feature. It allows family or friends who have been added to your contacts list to follow your movements in real-time. This is a nice, low-key way to say “Hey! It’s not an emergency but I want you to know where I am right now.” I can think of so many applications where this would be great for travelers — meeting new Couchsurfing hosts for the first time, heading alone to a bus station in a seedy part of town, or going for a jog in an unfamiliar city.

You can set a certain amount of time for the “Follow Me” to last. Once you feel safe again, you tap the “I’m safe” button and it will turn off tracking.

Your contacts do not need to have the app installed in order to be able to track you or receive alerts. However it’s probably a good idea to give your contacts a heads up so they know what’s going on when they receive those messages. 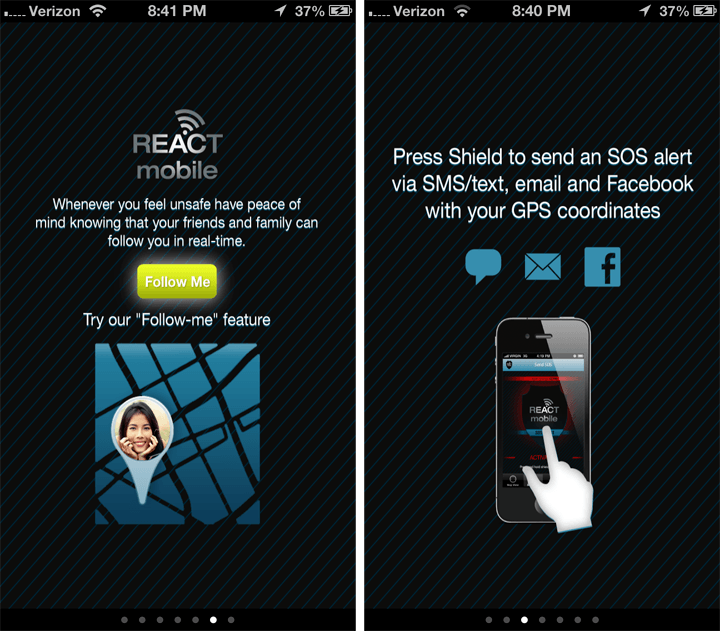 “Send SOS” is the app’s next level of alerting. Activating the SOS will send a message to your contacts that you need help, and will also open a prompt that will allow you to dial 911 with one touch of a button. So, should a sneaking suspicion that someone is following you turn out to be true, you’ll alert authorities with just one tap. A silent SOS message including your GPS coordinated is sent to your pre-selected contacts via email and text without any onlookers having a clue what just happened. There is an option to have your alert posted on Facebook ad Twitter, though I really can’t imagine a situation in which I would ever use that feature. (“Hey Facebook friends! Oh, you had organic heirloom tomatoes for lunch, and you went to the gym and found some funny cat videos? Awesome. I’m being attacked, please alert the authorities.”)

You can also simply send an SMS of your own wording to be broadcast to everyone in your contacts. 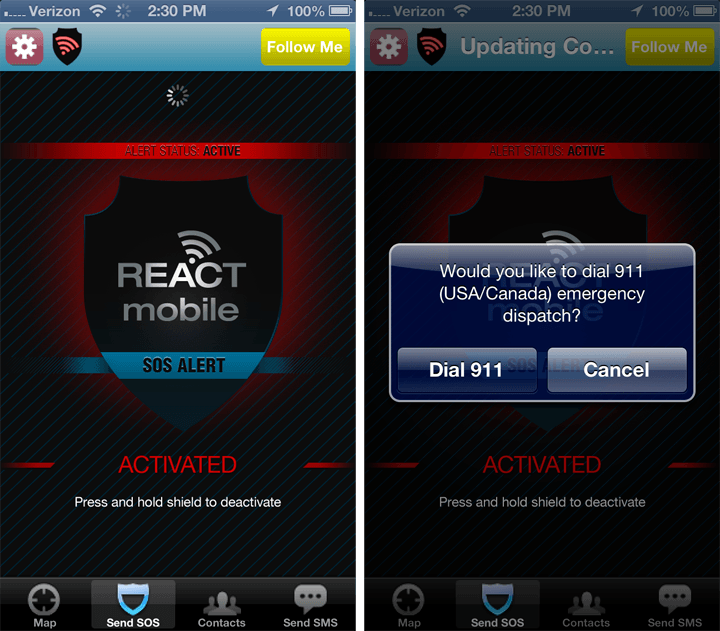 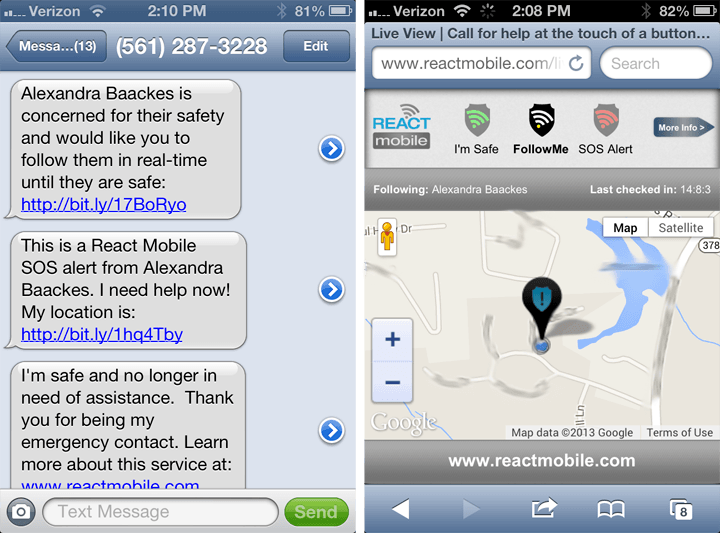 … and what your contacts see (with map blurred for security!)

There is room for improvement. I have some gripes that could be easily fixed in the next update. (1) I would like to be able to customize the SOS message that will be sent to my contacts. This would a major improvement. (2) Contacts cannot be edited once they are in place — even to add an email or a second phone number. (3) Sometimes directions were unclear — to cancel an SOS alert, there was text that prompted me to “Press and hold the shield to deactivate.” That had no effect, though tapping it did! (4) As I mentioned previously, many of the graphics are pixelated.

However, the main issue that will limit travelers from using this app, and one that I don’t know is solvable, is that you need a 3G or wifi connection! If you’re traveling domestically, most likely you have a data plan and it won’t be an issue. But for international travelers, this will be not be useable unless they invest in a local SIM card with data included.

The React Mobile app is total free! At one point React charged an upgrade fee for the “Follow Me” feature, but that is no longer the case — so don’t let references to those charges elsewhere confuse you.

As a woman who frequently and happily travels alone but also has flares of anxiety, I really appreciate the concept of this app. I think the greatest benefits are not so much a change in your physical level of safety but rather your emotional peace of mind. Obviously, an iPhone can’t ward off bad guys but it can make you feel a little less alone when you’re vulnerable. It can also make loved ones who might be nervous about your travels feel more at ease as well. At this price — free! — there’s no reason not to give it a try.

Do you use any apps to help you feel safe when you travel? 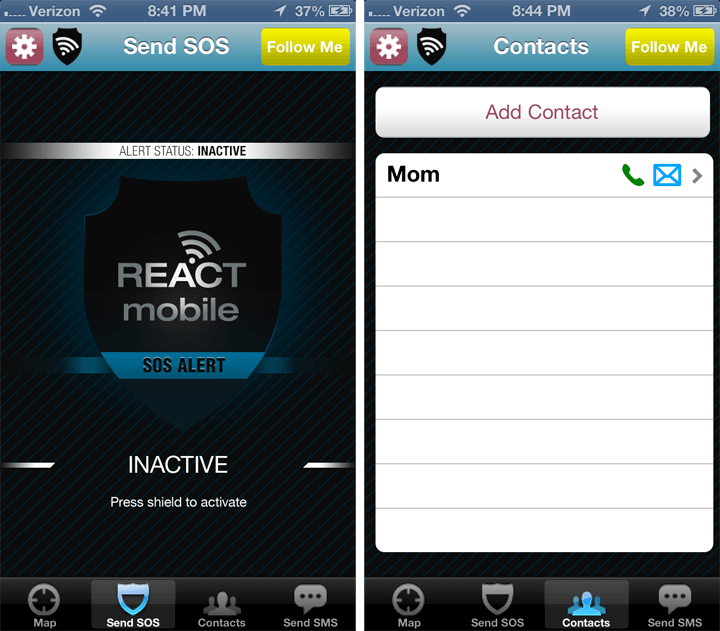 Download React Mobile on your iPhone — coming to Android soon! I was compensated for my time in reviewing this app.

Beating The Post-Travel Blues with Skillshare