Part of what makes Pai special is that it’s not just an idyllic hippie town — outside the borders of the village map lie an almost overwhelming number of natural attractions to explore. I’d seen several on my previous adventures motorbiking around Pai, and was excited to see something new. That said, I wasn’t really attached to what this new thing should be, and neither was Heather, really. So one day, we rocked up to a tour agency and simply requested to be taken somewhere, — and you can see what difficult and picky customers we were being here — somewhere “cool.” And that’s how we ended up at Tham Lod Cave. 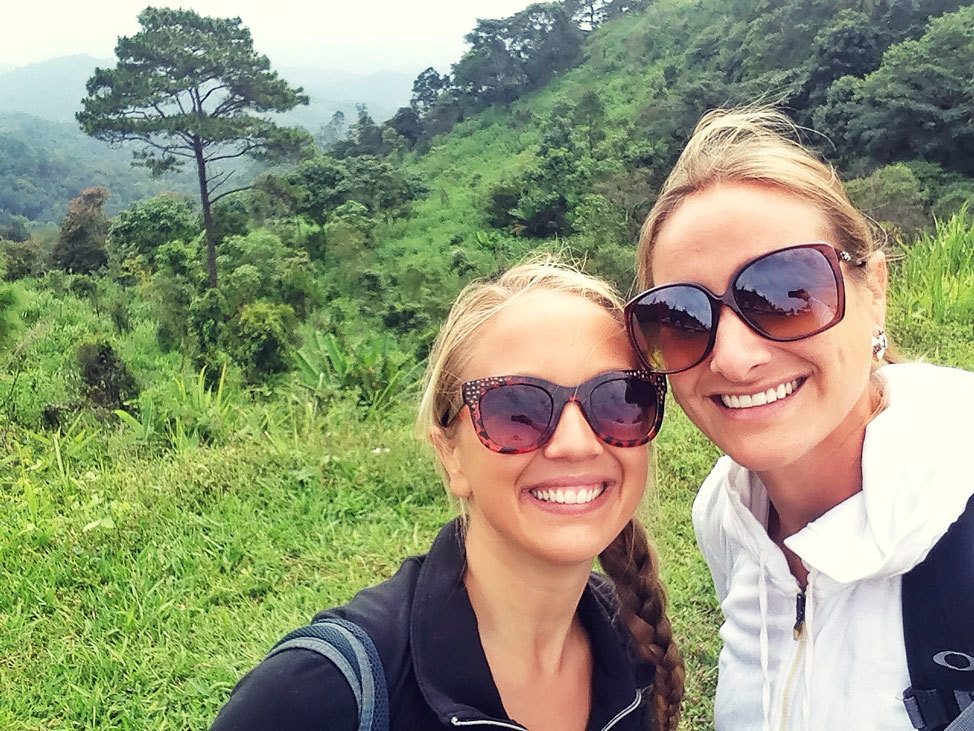 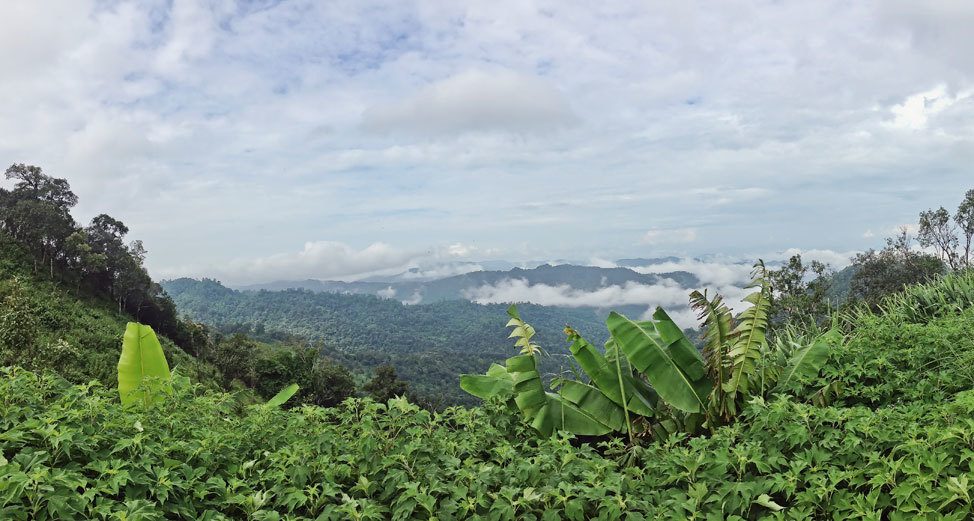 The 1,666 meter long Tham Lod Cave is about forty minutes away from Pai, in Soppong. We were joined by a group of four other girls and had a nice time getting to know each other and swap travel tips along the ride, which was also broken up by a stop at an overcast scenic viewpoint.

Arriving at the park, we were delighted to find all kinds of silly photo ops, including but not limited to a sign announcing we were in the land of Pee Man. (We’d later find out the local Shan people believe much of the caves contents were created by a spirit called “Pi Man.”) 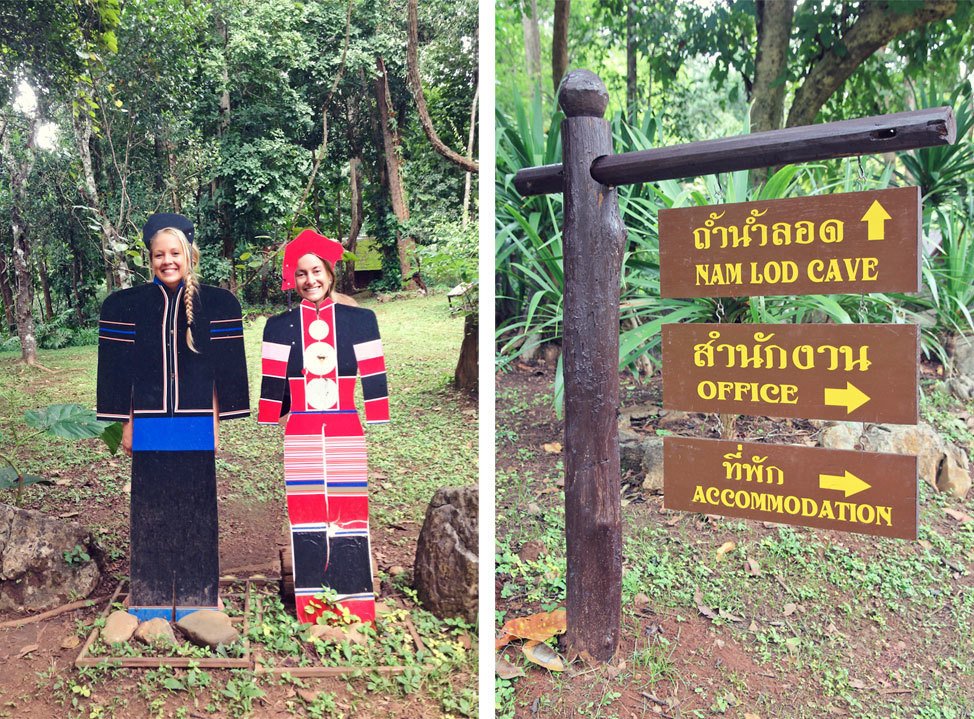 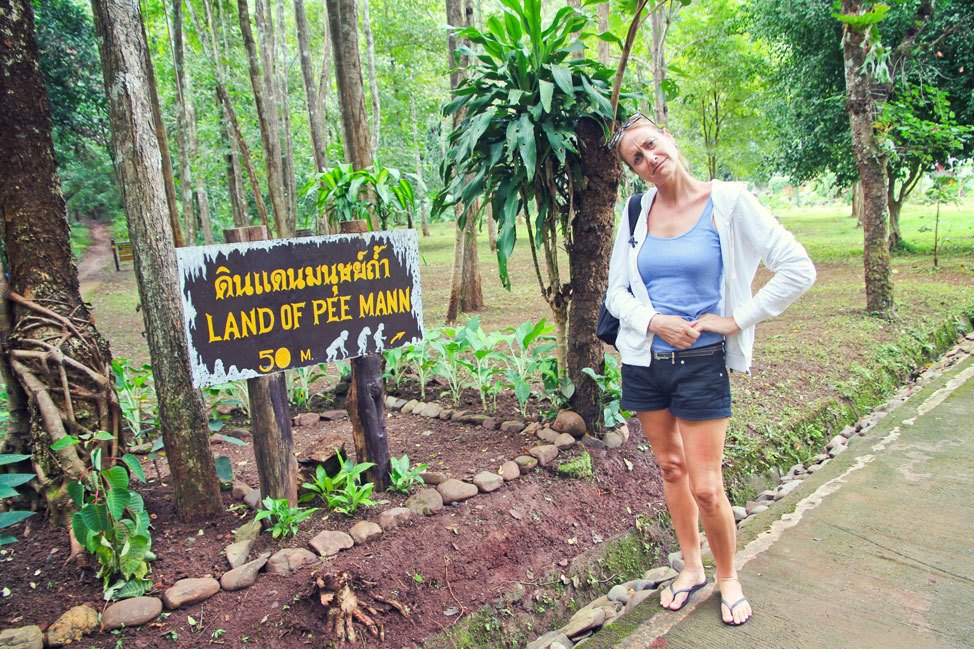 At this point, our driver from Pai handed us over to a compulsory local guide. This isn’t the kind of cave you’d be able to or want to wander through solo — with the Nam Lang River flowing through it, you’ll also need a bamboo raft to get around to its various chambers.

As we approached the gaping cavern that led into the cave, I could already smell the overwhelming stench of bat guano. 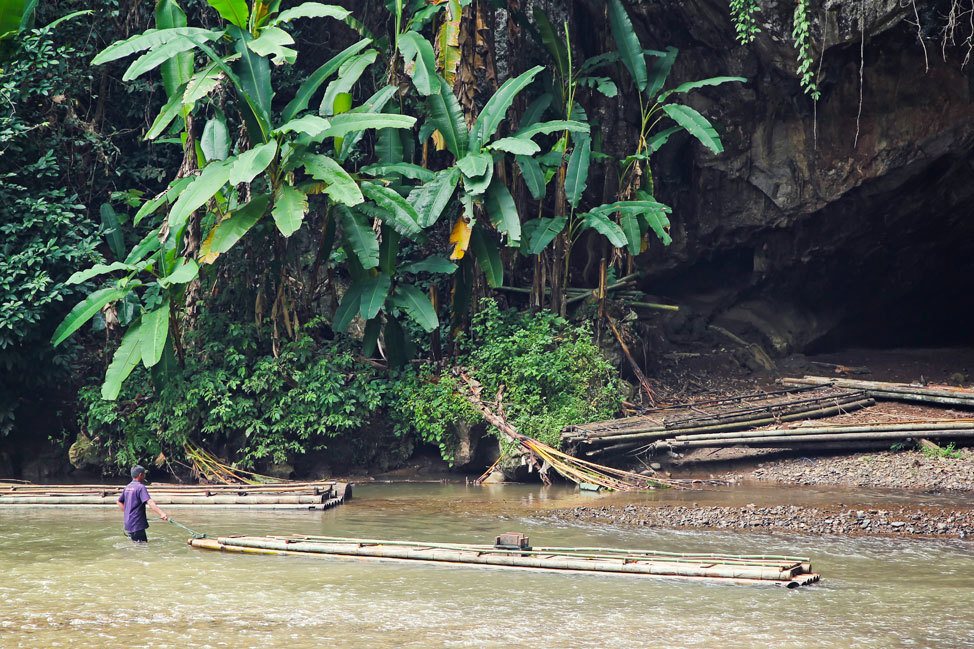 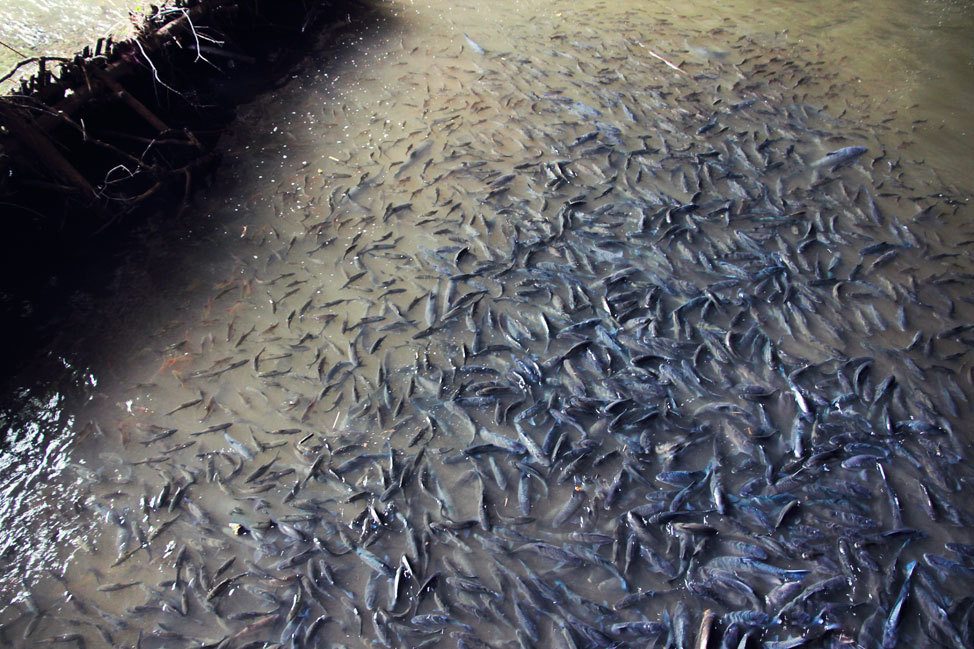 Having been to extremely modernized and officially-outfitted-for-tourism type caves in more developed parts of the world, I loved that this one was so very back to basics. No installed artificial flood lighting, no ferries, no safety standard installed emergency exits. Just two guides carrying gas lanterns, and two bamboo rafts being powered by a large stick pushing off the floor of the shallow river.

Stepping gingerly onto the raft, I looked over the edge at the enormous, swarming fish, hungry for the food sold my locals and dropped into the water by tourists. 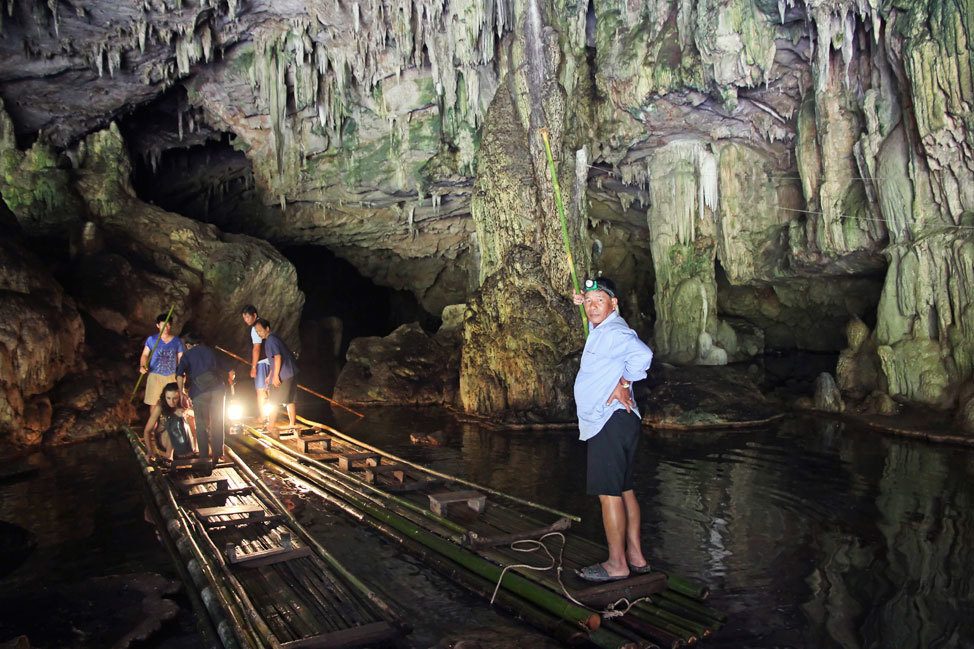 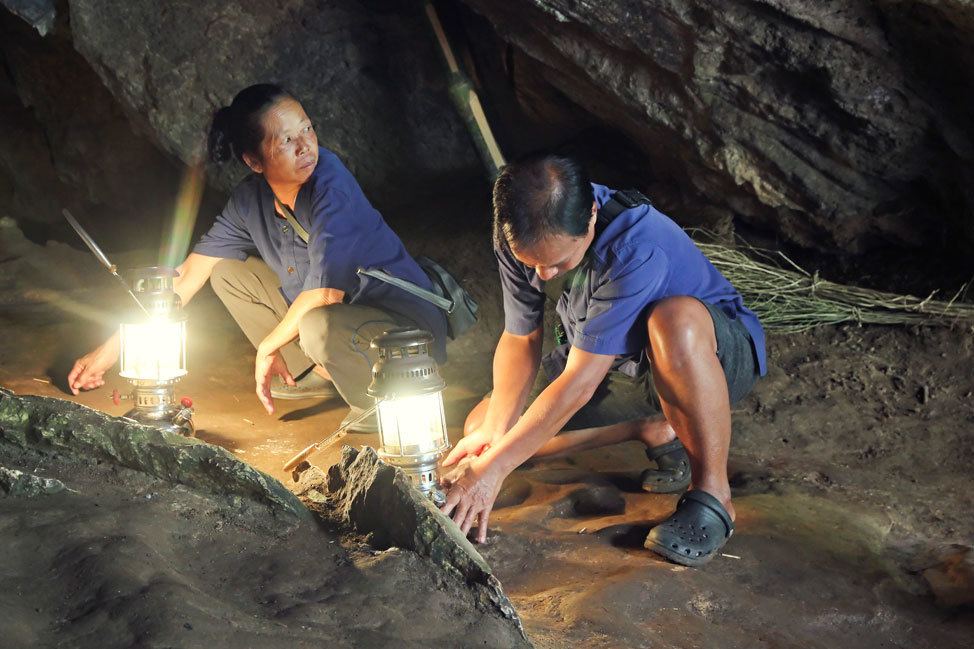 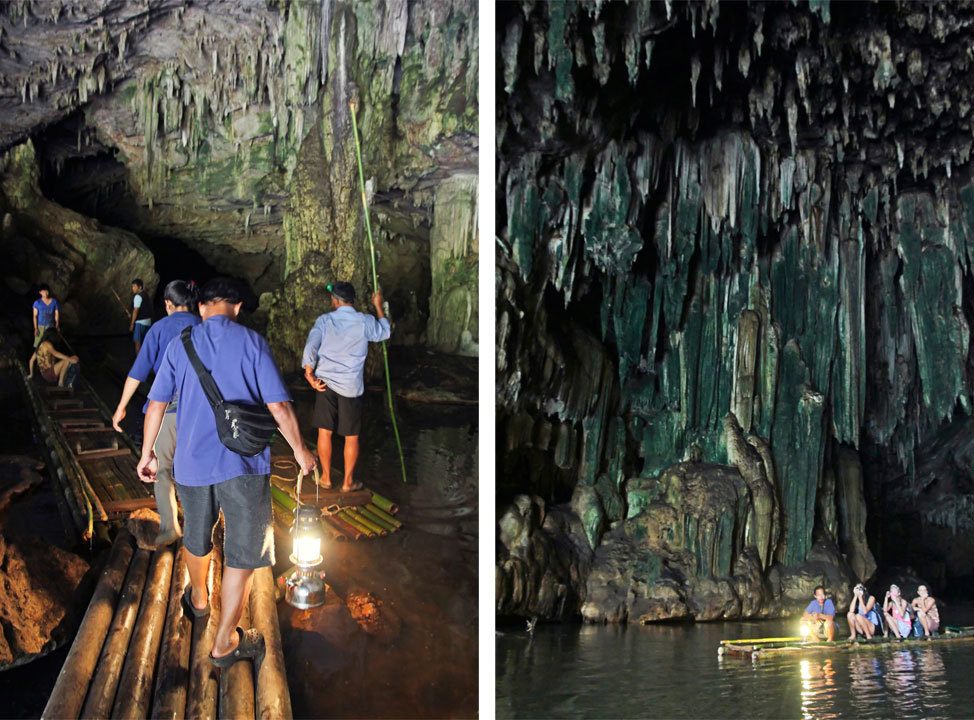 There were three different stops where we exited the rafts to climb up into the cave chambers via rickety wooden staircases and explore the wealth of stalactites and stalagmites inside. Also filling the caves were thousands of bats and swifts — a type of small bird — and teakwood coffins thought to have been carved by the Lawa tribespeople over 1,400 years ago. (Heather and I couldn’t help but think of another time we saw coffins in caves. I guess it’s kind of our thing?)

Our guide didn’t speak much, if any, English, but we don’t speak much Thai either. We enjoyed the back and forth of trying to decipher what they were saying when they identified various famous formations in the cave, (“a turd…. no! a bird!”) and we all had a good laugh when we got it right. Most of all, they were patient with Heather and I’s incessant photo taking, which was much appreciated. 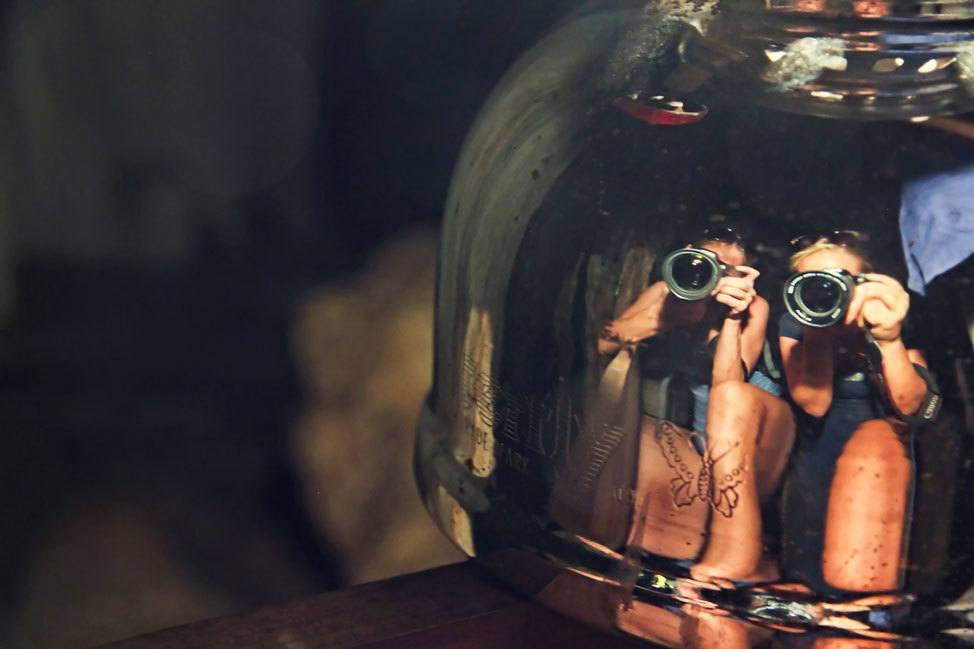 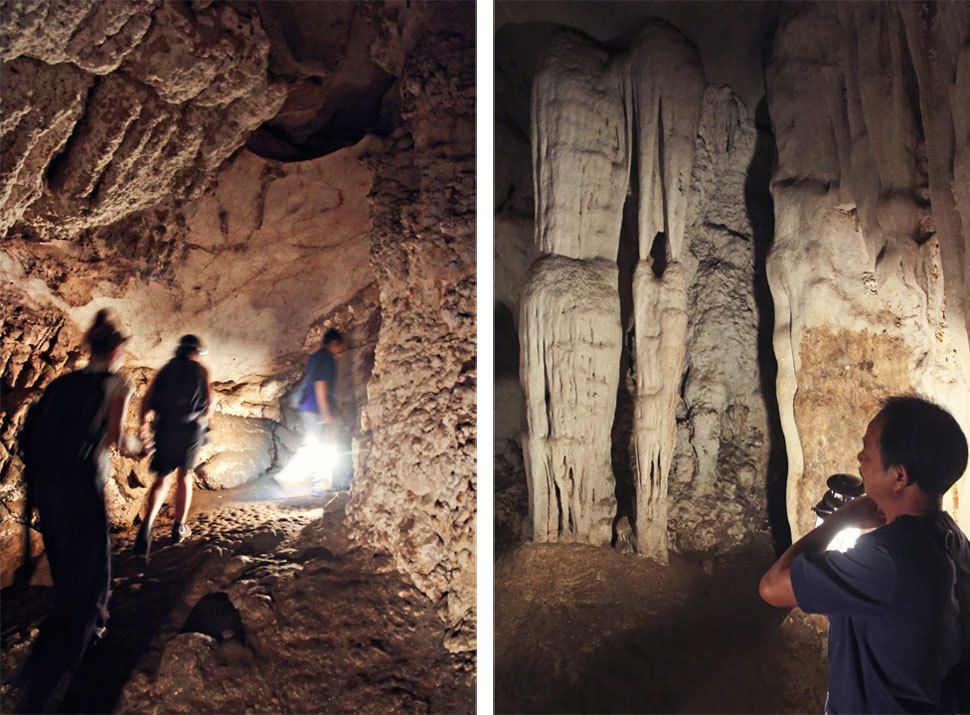 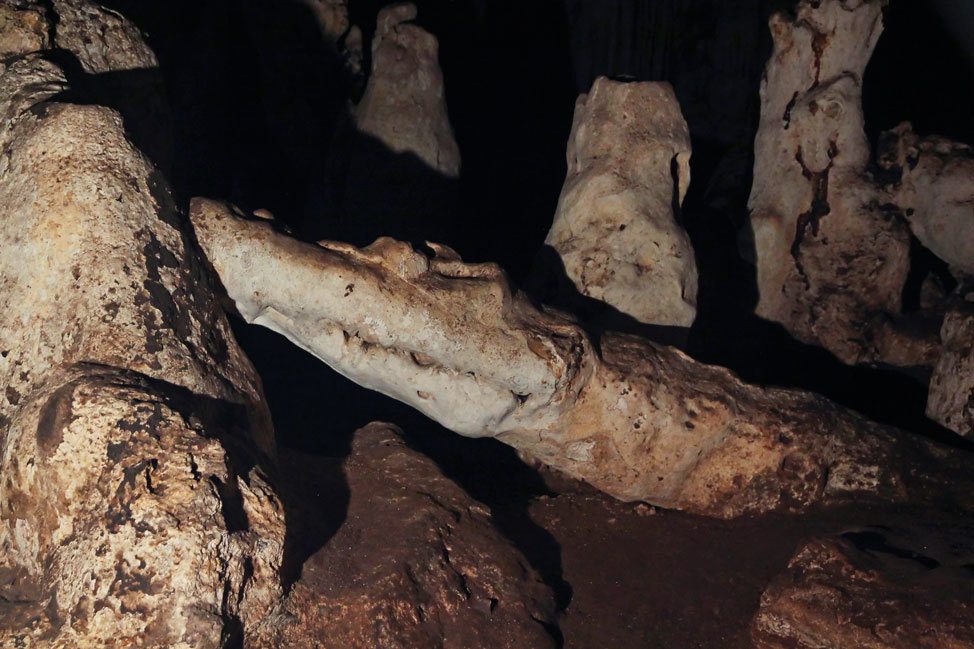 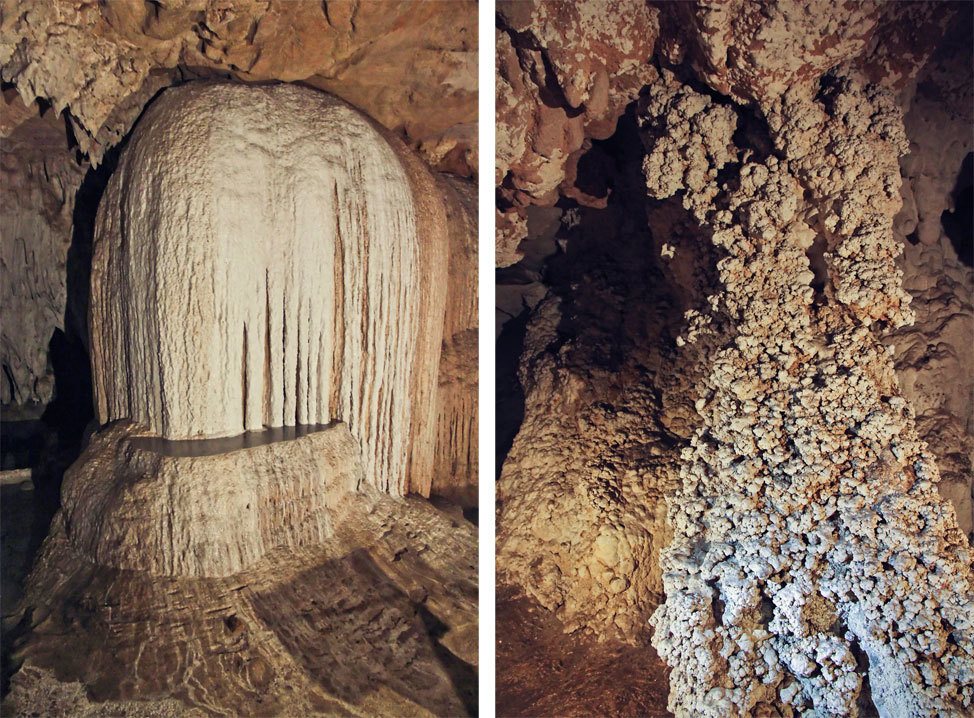 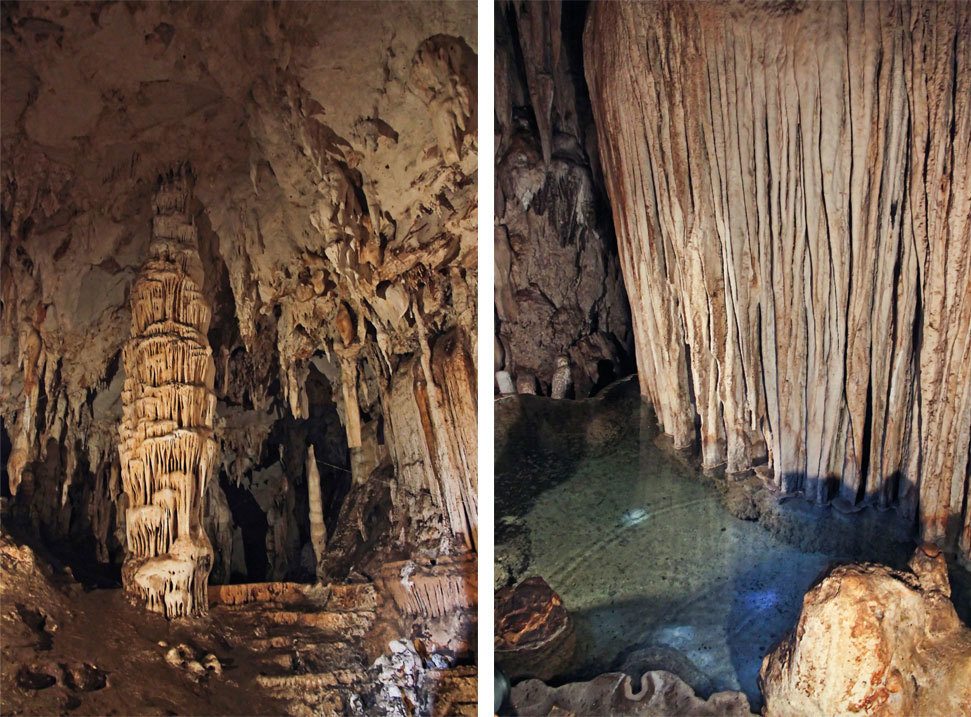 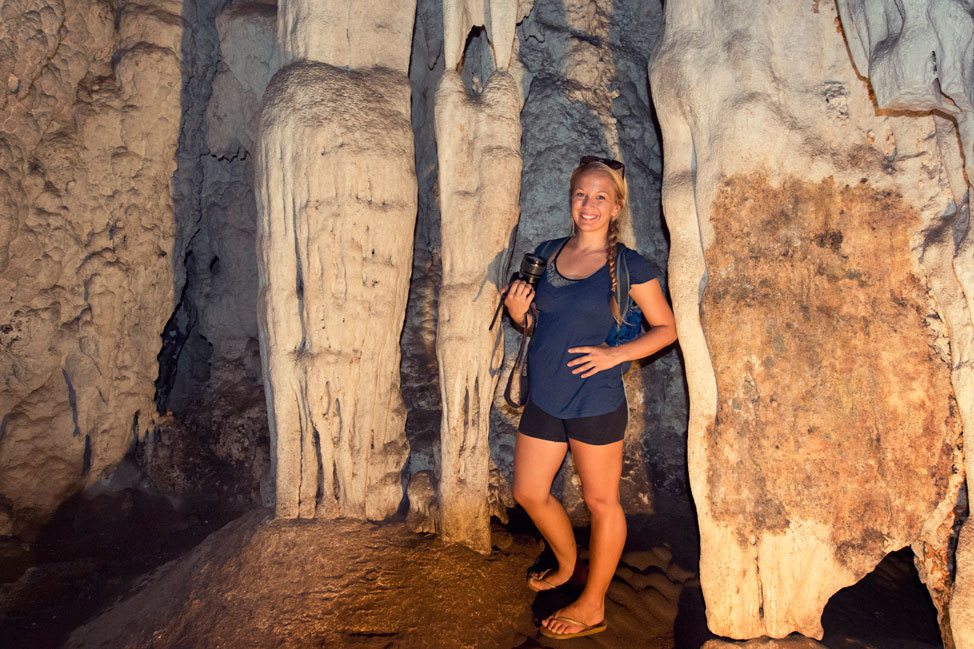 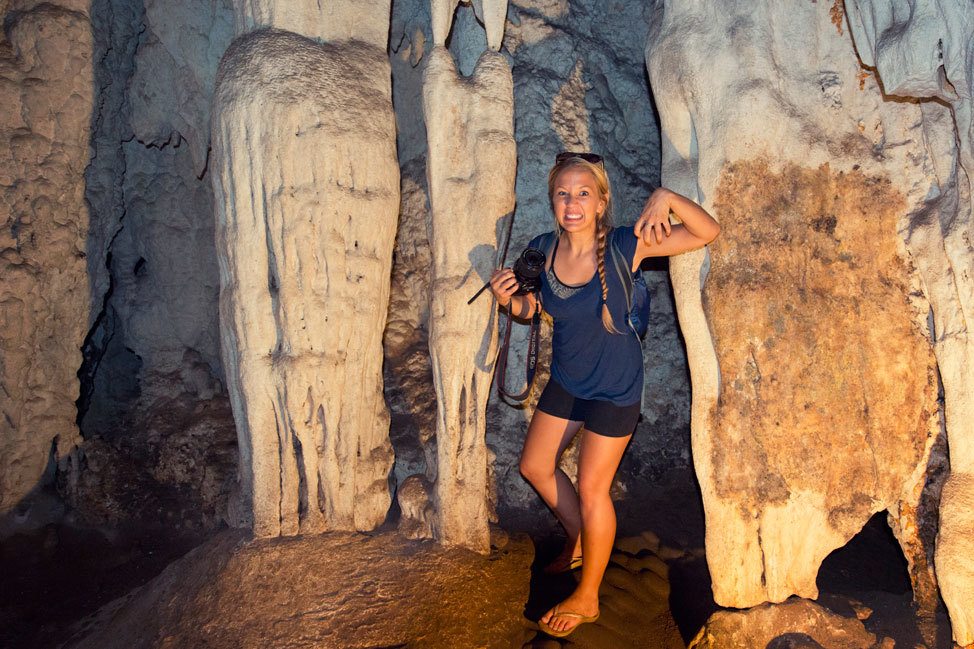 This tour is no quick peek in a grotto — while I wasn’t checking the time, I think we spent well over an hour inside. There was just so much to see, and in a place like this, you move slow. 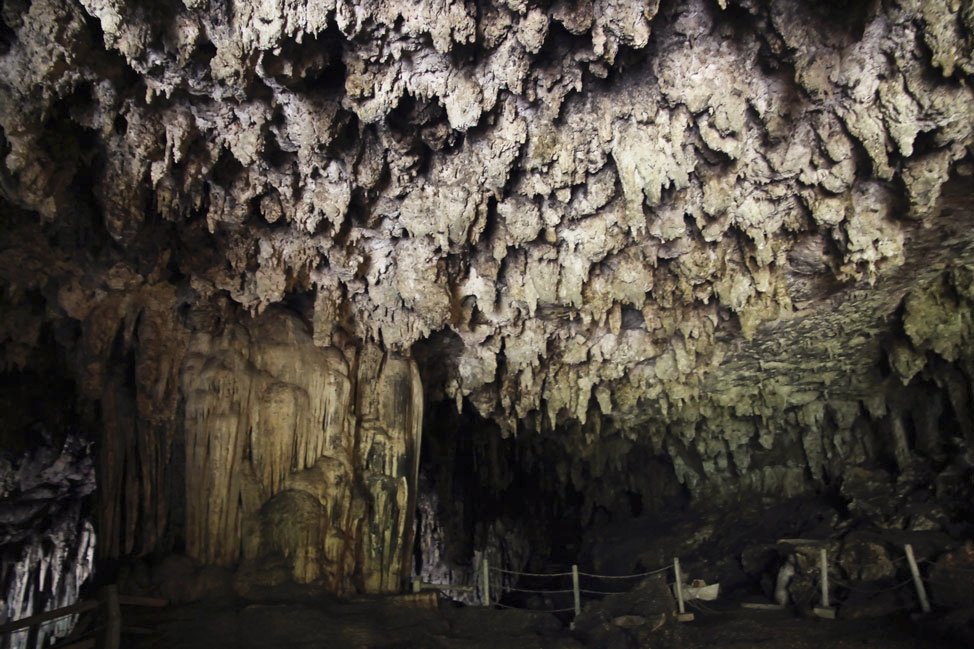 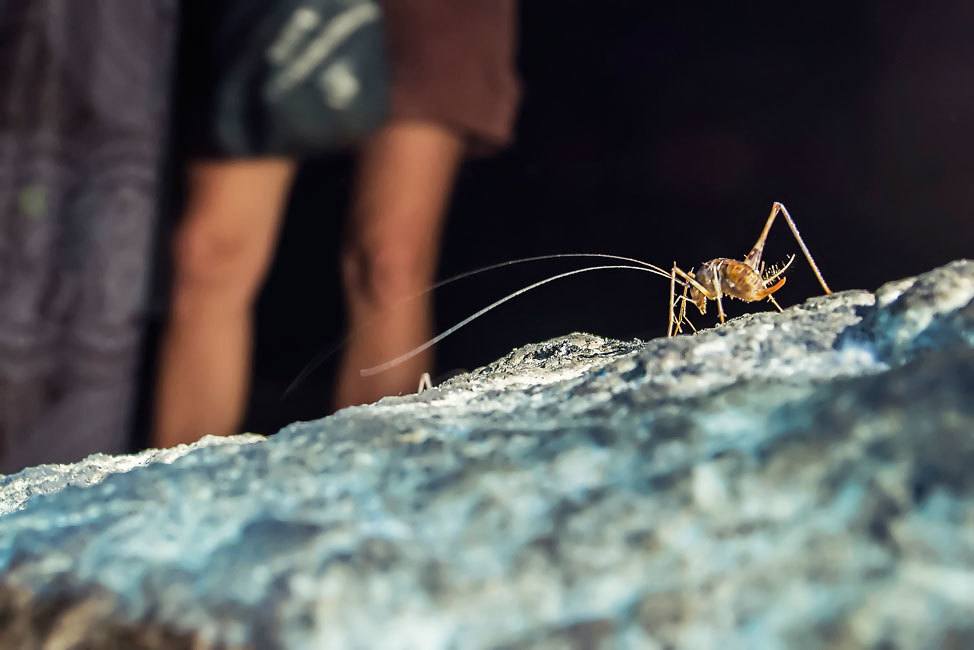 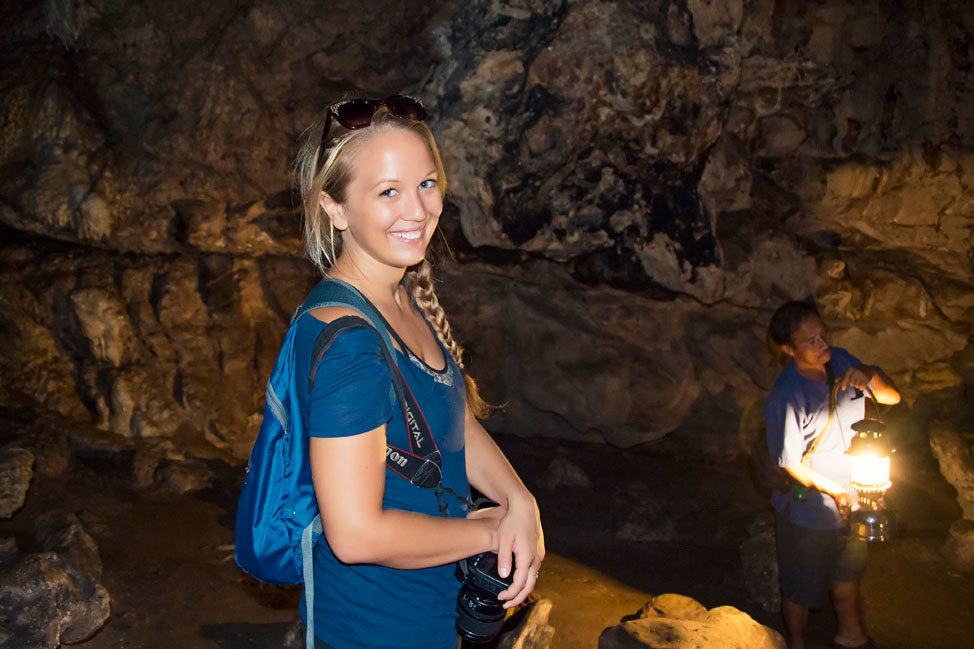 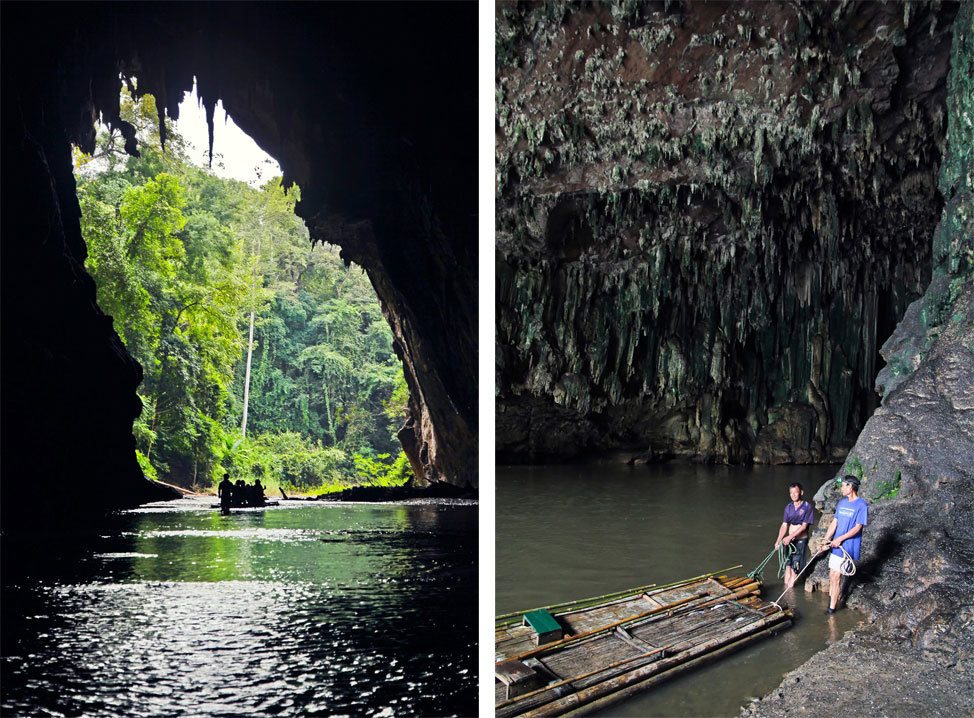 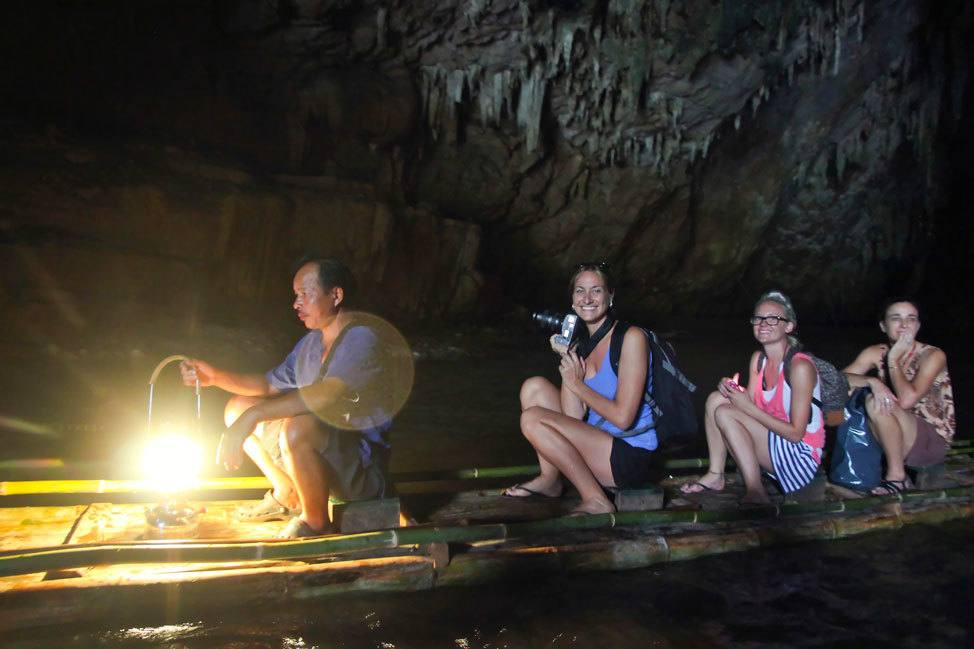 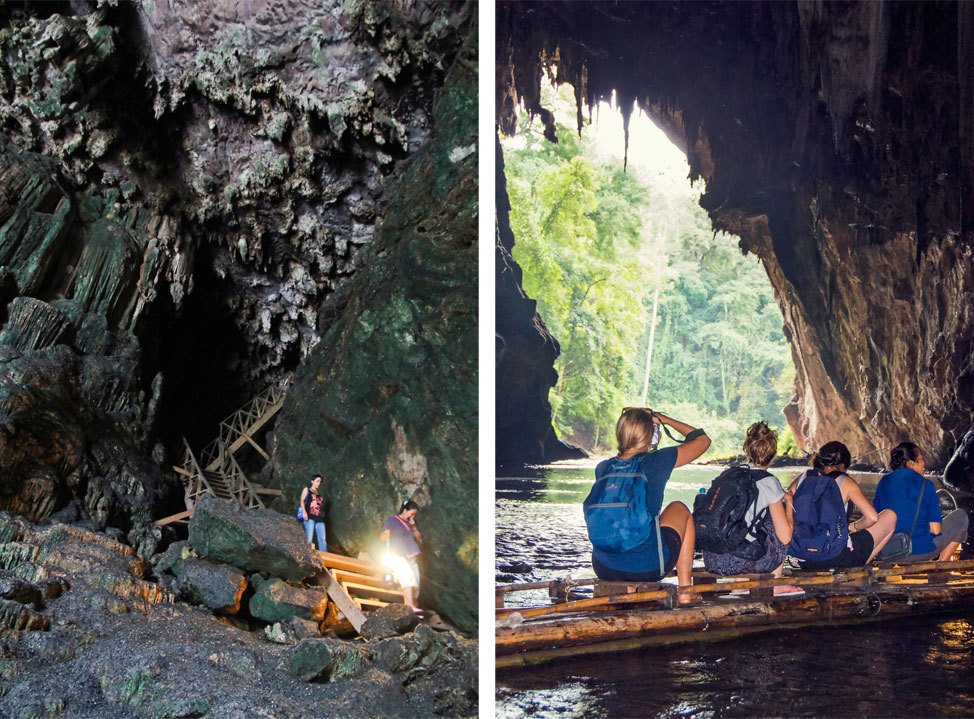 Reaching the opposite mouth of the cave, we wound our way through a beautiful trail in the woods. We had somehow lost track of our guide so laughingly hoped we weren’t going to be sleeping in said woods that night, but twenty minutes later we were deposited back where we started.

Later, I’d read that if you stay until twilight, thousands of swifts and bats fly into the cave in a spectacular show that lasts over an hour. I’ve seen something similar before in Lopburi and it was magical — wish I’d known about it here as well. 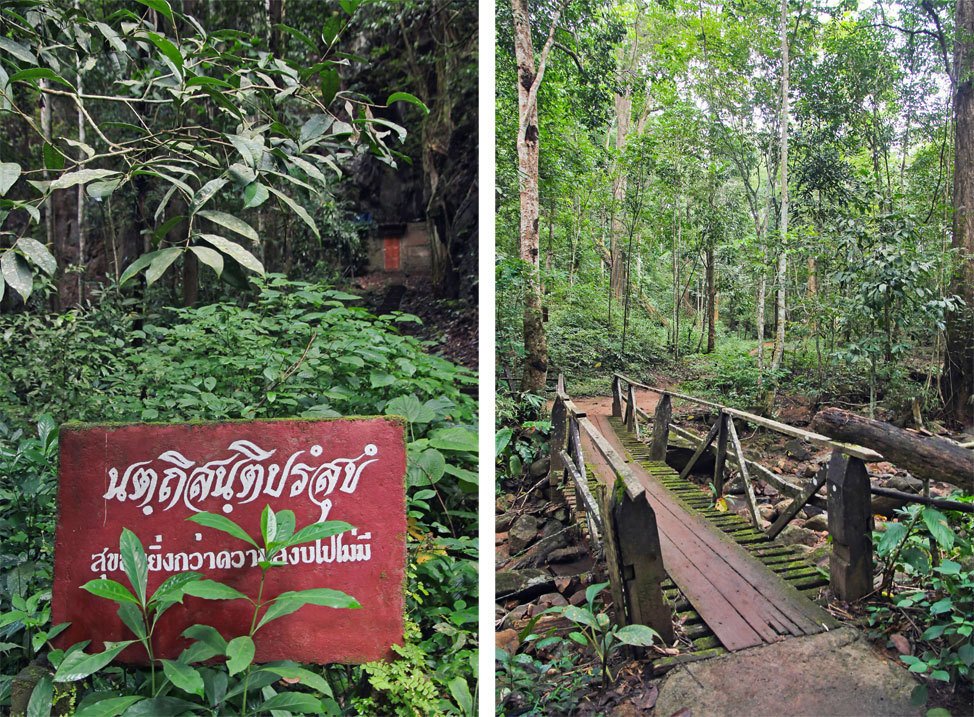 We each paid 500 baht (about $15) for the tour, including transportation and guide fees. It was also meant to include time at a nearby waterfall that we were pretty pumped about, but torrential rain that unleashed as soon as we were back in the van meant we skipped that stop.

It’s more than possible to visit on your own via motorbike, with the guide and bamboo raft costing 550 baht flat for up to four people. I’d recommend bringing your own torch, if you travel with one, as well as some baby wipes, if you can score a few — the stairs are pretty tricky to navigate and you will be clutching those guano-coated handrails.

Regardless of how you get there, I’d add Tham Lod to my list of must-dos for any trip to Pai. Show us something cool? They knocked it out of the park — or should I say cave.

What’s the coolest cave you’ve ever been to?

Glamping Among The Elephants: A Journey to Khao Sok

Photo of the Week 190: Nicaragua Catcalls and Question Marks
28 Comments...