Beyond the Tubing in Vang Vieng

Once upon a time, visitors came to Vang Vieng to explore the beauty and the peaceful setting of rural Laos through a variety of adventure activities. And while it is still possible to kayak, mountain bike, rock climb, and more; those pursuits have been overshadowed by the all-day river raves happening on the Nam Song. 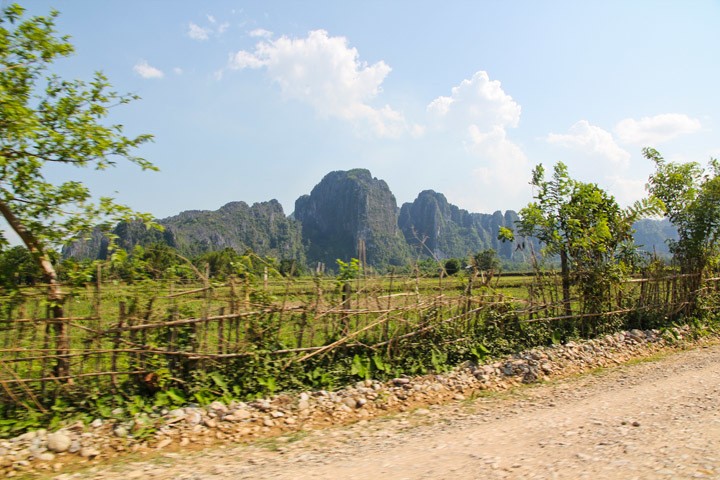 I was glad that even though I was traveling with a party-loving group of backpackers, my friends were happy to take a day off from the river and explore the outskirts of Vang Vieng. We hopped in a sawngthaew and requested a trip to a cave and to somewhere we could swim. 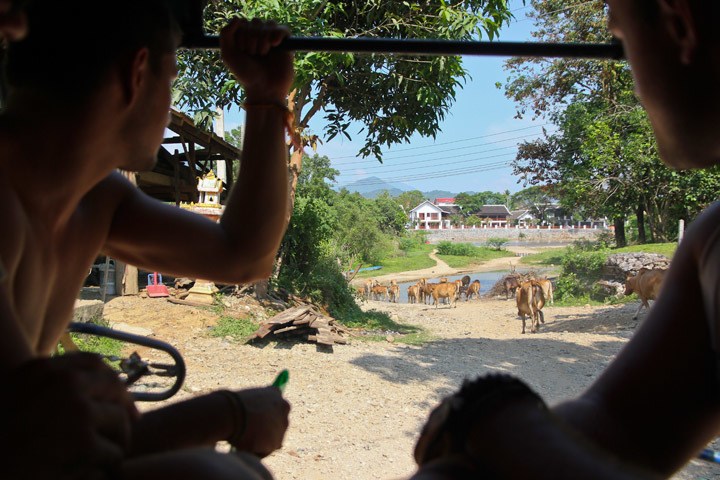 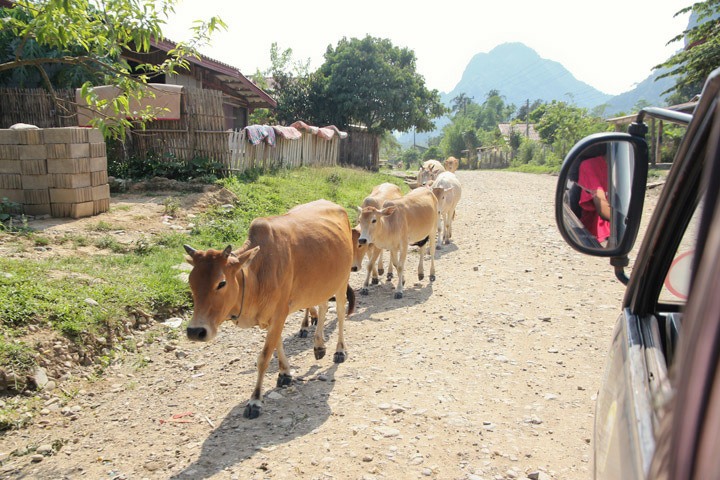 After a beautiful drive through rural communities that felt millions of miles away from the debauchery of the tubing scene, we arrived at Tham Phu Kham. This cave is considered sacred to the Lao people and has been made popular by the so-named Blue Lagoon at its base. Though small, the swimming hole was deep and filled with amusements like swings, ropes and diving platforms. 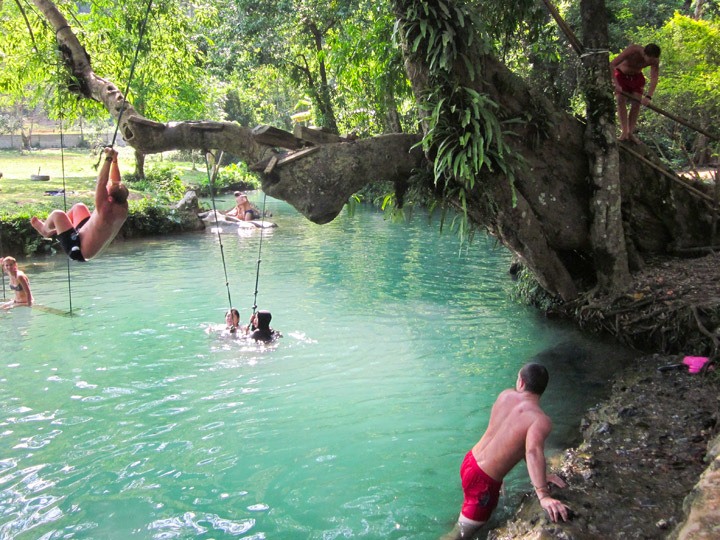 Laos was quickly becoming the country in which I jumped off things: 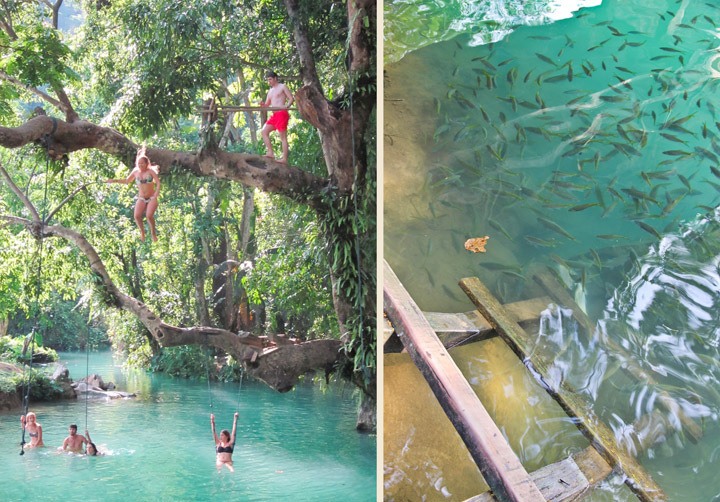 While there were a fair number of foreign tourists around, there were also a mix of local families picnicking and enjoying the day. 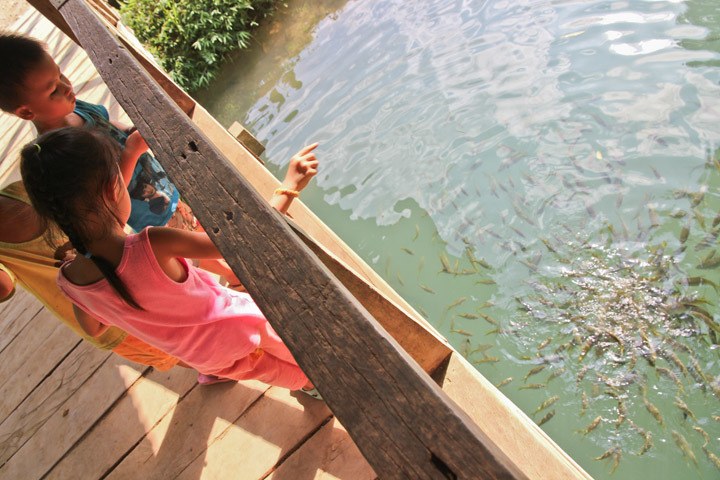 Of course, the lagoon would feel a lot more exotic and naturally beautiful if the car park weren’t located steps away. Sigh. 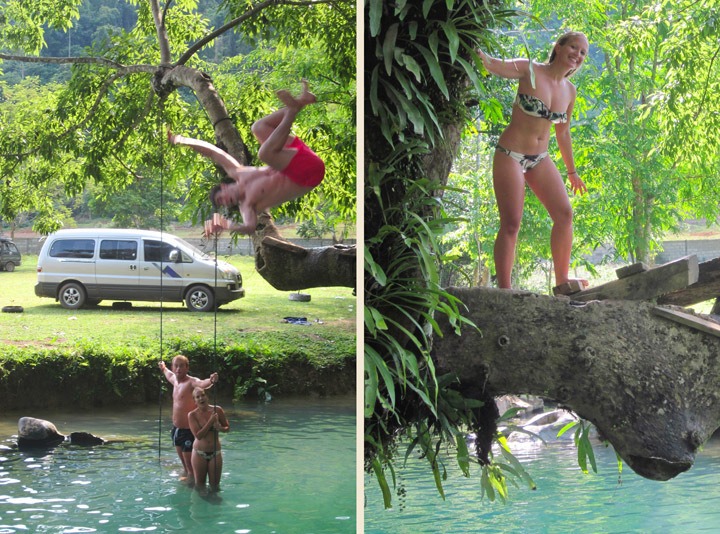 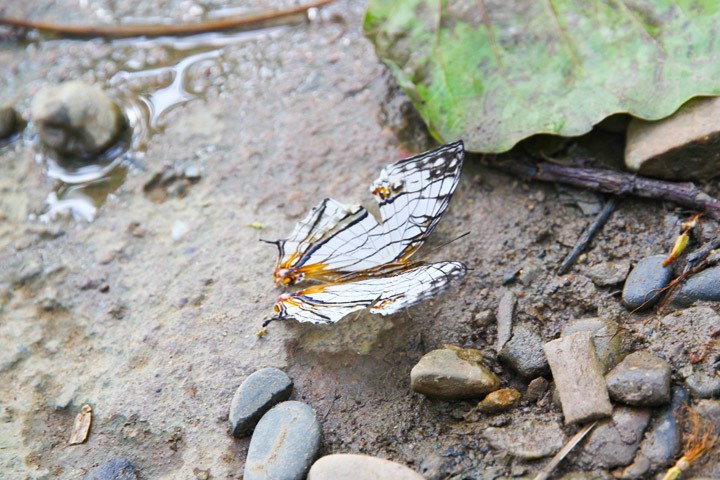 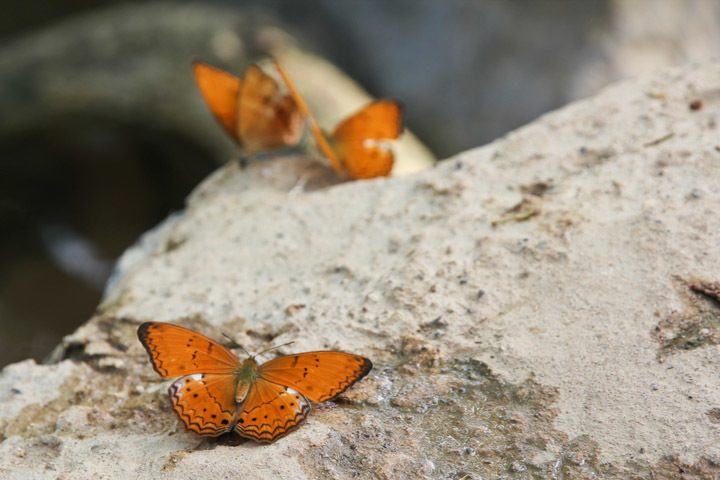 After we had sufficiently conquered every branch on the great tree by leaping off of it, we decided to take on the cave itself. At the base of the 200 meter climb there was a sign about renting flashlights (10,000 kip or about $1usd) and hiring a guide for a whopping 50,000 kip or $6usd. “Hey guys, should we…” I trailed off, pointing to the sign and remembering some sort of warning in Lonely Planet regarding Laos and caves.

“No worries, I came here last year!” George assured us, and so we all followed him blindly up the hill and into the darkness. 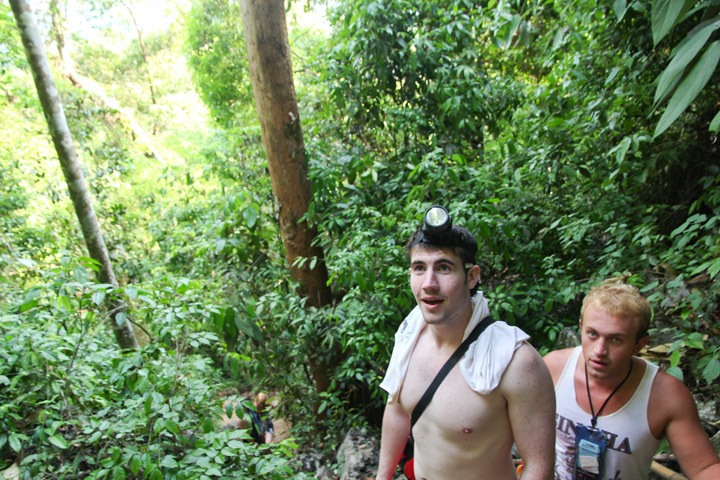 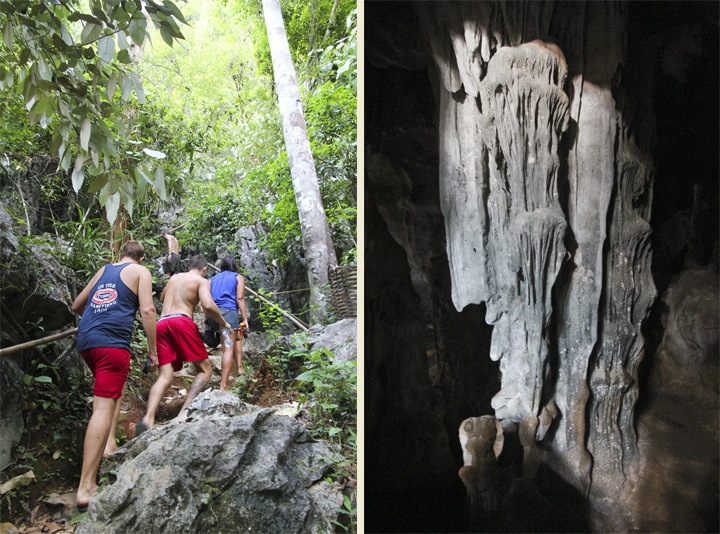 I actually made an audible gasp as we entered the cave. It was gargantuan and streams of light pierced through natural skylights to show off the various stalagmites and stalactites. 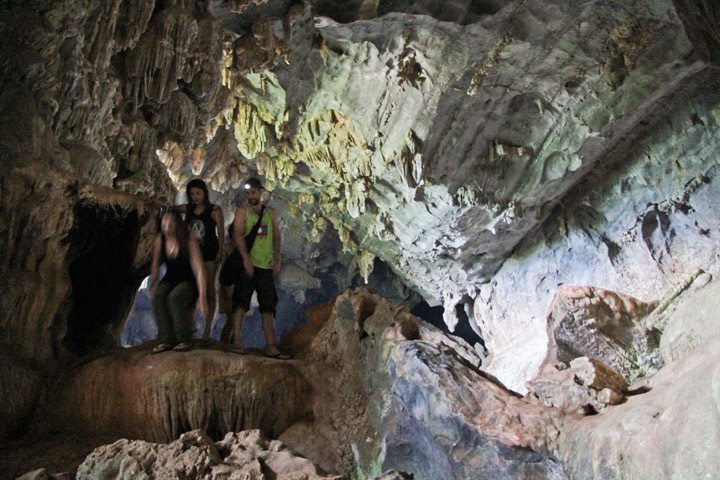 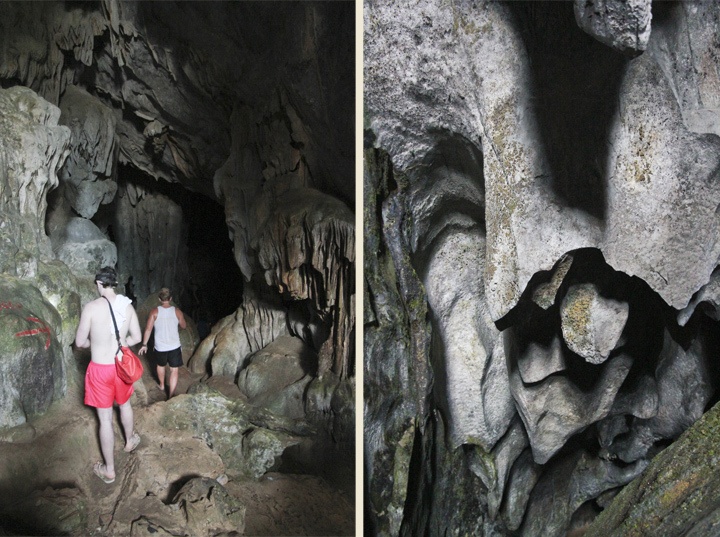 At the center of the main cave was a small reclining Buddha and a few offerings. We plunged past it further into the cave, moving slowly with our weak flashlights and inadequate footwear. 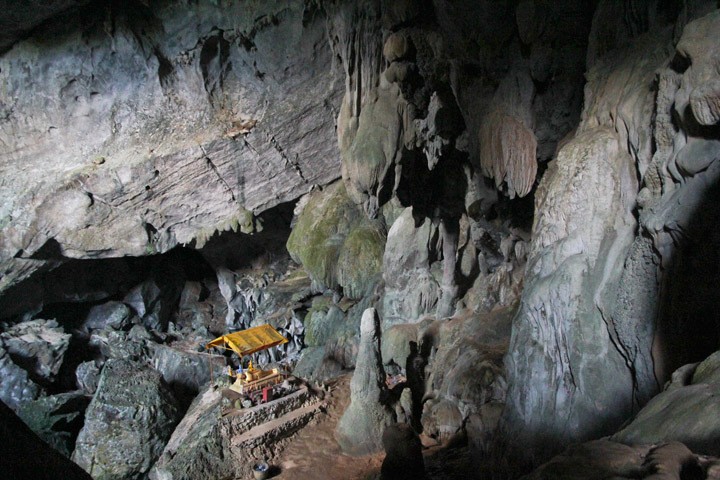 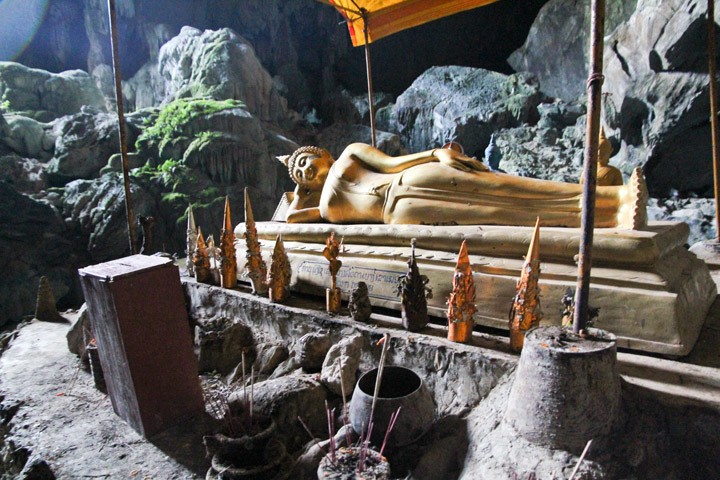 We didn’t go far before we were in near total darkness. The path was not clear and we often found ourselves helping one another over high ledges, sliding down muddy runs or having to call out to find each other when the group started to split into smaller ones. We were laughing and joking the whole way, so it wasn’t until my stomach started to really rumble that I realized how long we had been in there. “George, this does go in a circle… right?”

“Um… Yes,” he said, with notably little confidence. Our laughter turned to nervous giggles as we tried to decide whether to forge ahead or turn around. I was in the vocal minority who wanted to keep going. At the time it seemed like a good idea. Currently, I have no idea what I was thinking. 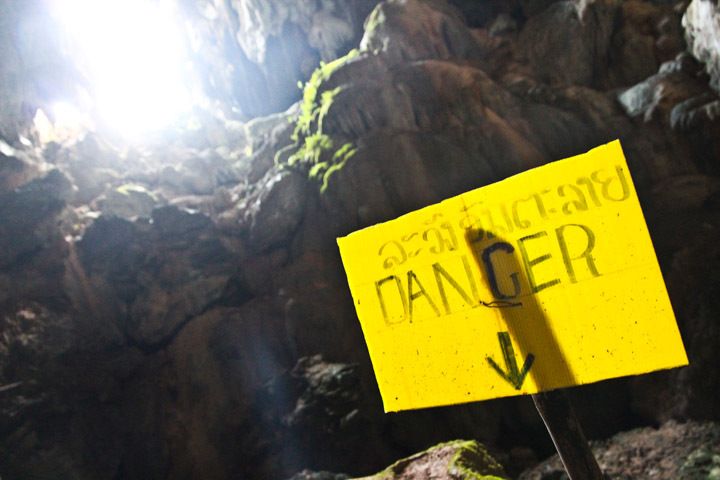 I didn’t take but a few more steps before I lost my footing completely and went sliding down into a dark muddy passage; completely out of control. I grabbed frantically for something to stop my descent but all I found was loose dirt. Finally I came to a plateau and stared up at my friends above me. I had no idea how I was going to get up. I’m going to die here, miles into a cave system in rural Laos. Someday they’ll find my skeleton and my camera memory card, I thought as one of the guys came sliding down in an attempt to rescue me.

I slung my camera across my back and put my dirty flip flip straps in my mouth so that I would have both hands free, and started working against gravity. Jake had two hands on my butt in an attempt to give me a boost while I pawed desperately at the walls, looking for something to grasp onto. At one point I started slipping backwards, and my heart sank. With tensed muscles and a body drenched in sweat, I finally fount footing. When I got close enough to the top, someone grabbed my wrists and gave me a final yank. I was saved. 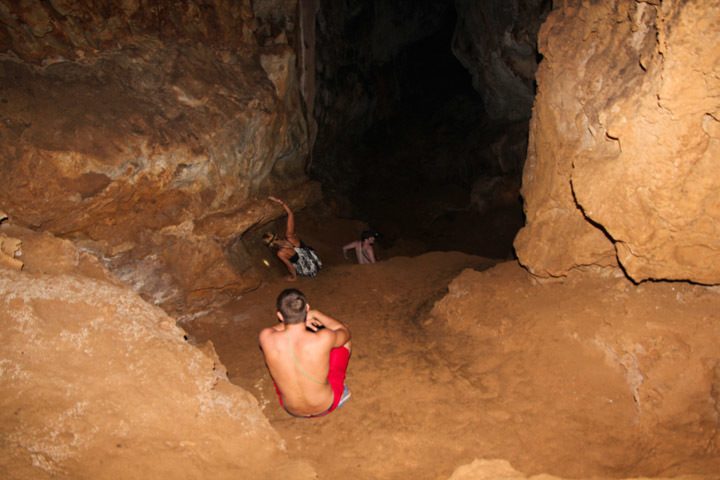 Sitting at the top, covered in mud and nervous sweat, I snapped the above photo. I didn’t want to forget the place I almost met my end.

The drama wasn’t over just yet, as it took two more cases of getting lost before we finally found the path back to the entrance. Along the way we make jokes about who would die first if this was a horror movie (the dumb blonde: me), how many near-death travel experiences we had between us (countless), and who we would eat first if we never got out (George). 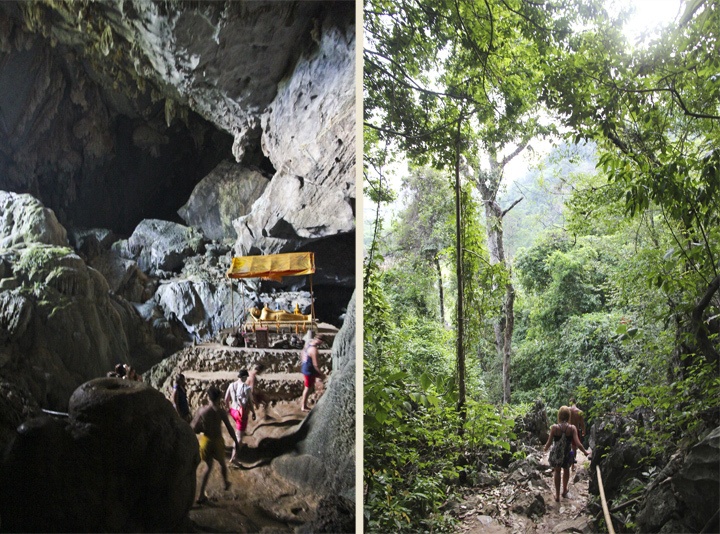 Let me tell you, I have never tasted fresh air sweeter than that first gulp I got as we exited the cave. I know I’ve made this whole brush-with-death thing sound pretty glamorous, but trust me: If you go to Tham Phu Kham, hire a guide! 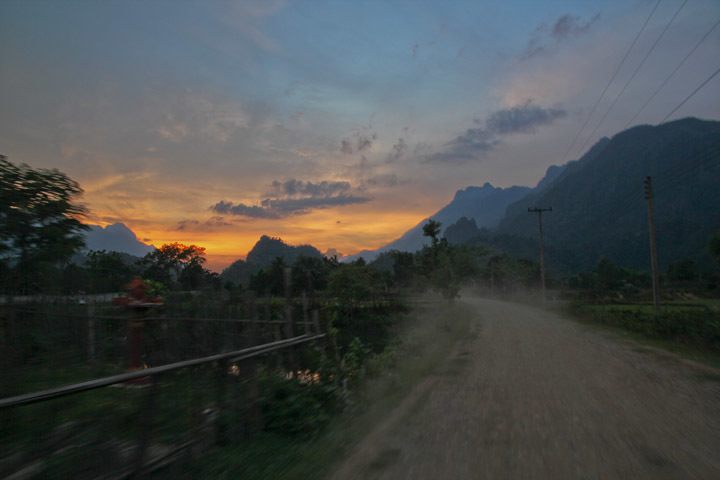 Two Thousand Feet Below The Philippines: The Cave Connection in Sagada

Adventures in the Negev Desert: Things To Do in Mitze Ramon

A Hamlet of Hedonism: The Town of Vang Vieng Hot Air Ballooning over Vang Vieng
19 Comments...