I’m off taking a real vacation in the only place possible: one without wifi. While I lock away my computer and play on the beach for two days, I asked my dear friend and Peru travel buddy Zoe Norvell to fill in for me.

At this point in my life: I can’t be bothered with taking pictures. I sometimes find it distracting to be behind a lens, which is why when I got ready for my trip to Peru I only brought along my iPhone and my Polaroid camera.

Did it help to know that I would be traveling with someone who has a really nice camera, takes way better photos than me, and is meticulous about documentation? YES. It definitely did. I felt no pressure to force myself to take scrupulous photos because I knew I’d be stealing all of Alex’s eventually. And did I mention I selfishly gave her a GoPro for her birthday?  “Here, best friend, take videos of our trip together so I can remember it always…mmkay thanks. Oh and Happy Birthday.”

A Polaroid camera is great because it slows you down and forces you to be selective… except for when you’re not and you wake up one morning and realize the amount of Polaroid shots you ended up with equals the number of alcoholic shots you ingested the night before.

What was it like to take the trip of a lifetime with nothing but a Polaroid? Here’s the low-down on my camera choice.

Price: The camera itself is cheap at less than $100, far less than a decent digital point and shoot would run. It is the film that is expensive, especially compared to essentially “free” iPhone snaps. My film costs about 60 cents per image, or $11-$13 for a pack of 20, which is why you’ve got to choose your moments carefully. 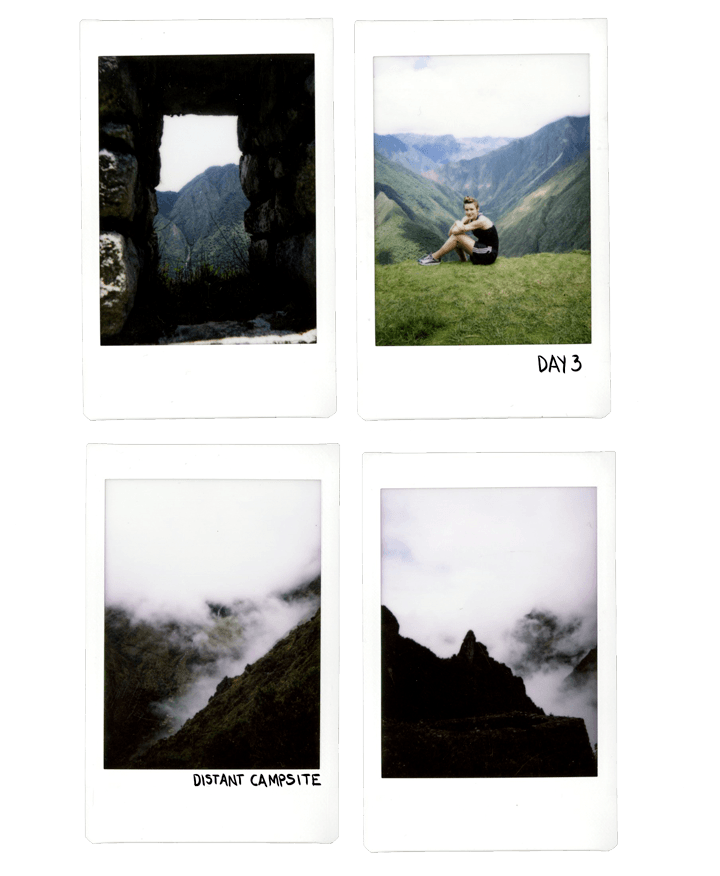 Exposure time: Instead of feeling pulled out of the moment, I think the camera creates an experience that becomes part of the moment as you wait about 30 seconds for the little white rectangle to change. On the Inca trail, I took a lot of Polaroids and would eagerly wait to see the tiny image emerge, often alongside a fellow hiker. 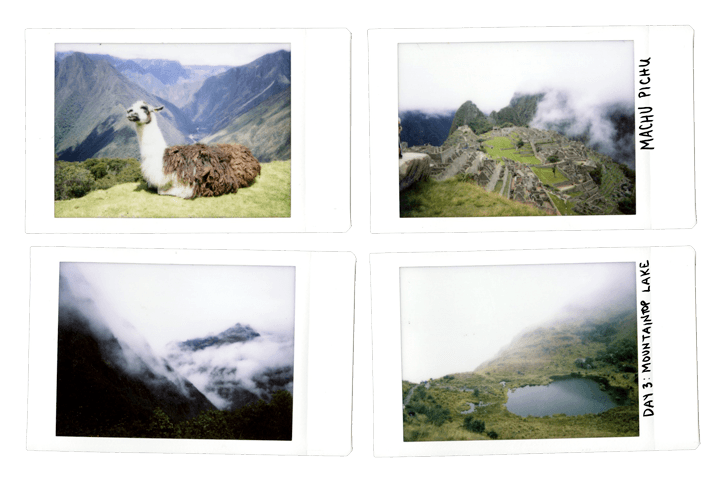 But of course, in a more hectic scene, I’d stuff them into my back pocket and try to keep up with the crowd. 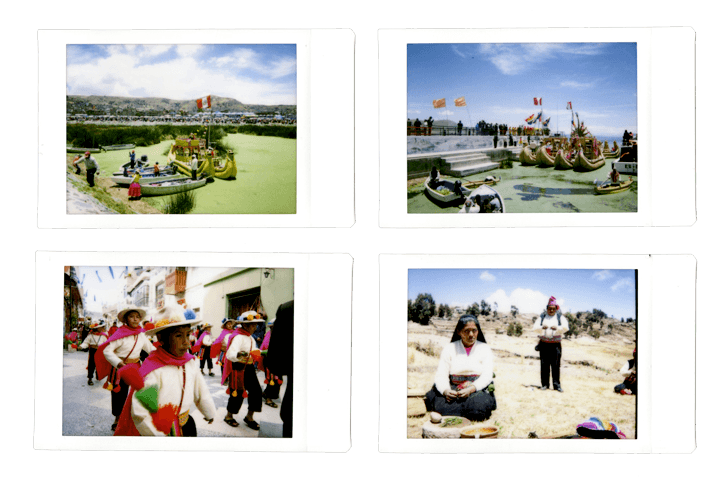 Settings: My Fuji camera model has 6-ish settings: Flash or no-flash, Landscape or Auto, Light or Dark.  The problem with the “L” and “D” is I can never remember if its ‘choose L if you want to overexpose with more light’ or ‘choose L if the scene is very well lit already.’  Sometimes you have to experiment. 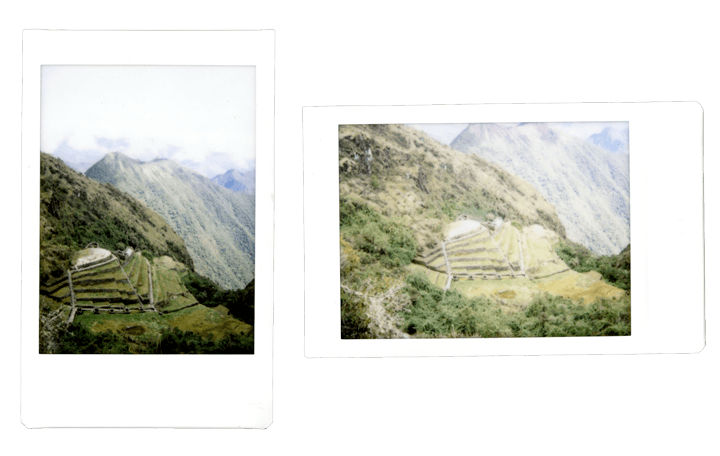 Handing it over: Getting other people to take a photo for you is risky. That’s 60 cents you’re trusting them with! You know that warning “Objects are closer than they appear?” Well, it’s the opposite.  Objects are farther than they appear! So the photographer needs to scoot in closer to the subject than they think.  I always tell people when I hand my camera over: don’t be afraid to come in close!  Or while in Peru, “mas cerca por favor!” 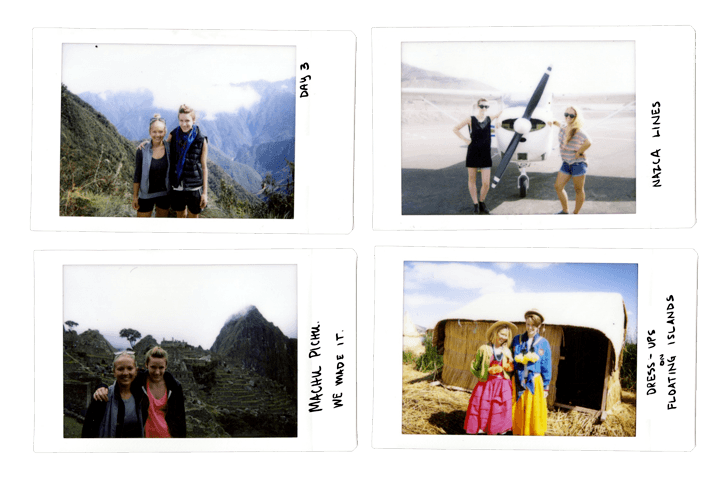 Candids vs Action: The great thing about instant film is that you are rarely going to re-take a picture if it comes out wrong.  First of all, you don’t know how it looks for 30 whole seconds! Maybe the sun was too bright, or maybe that paragliding Zoe already landed… But the beautiful thing is: “Oh well.” 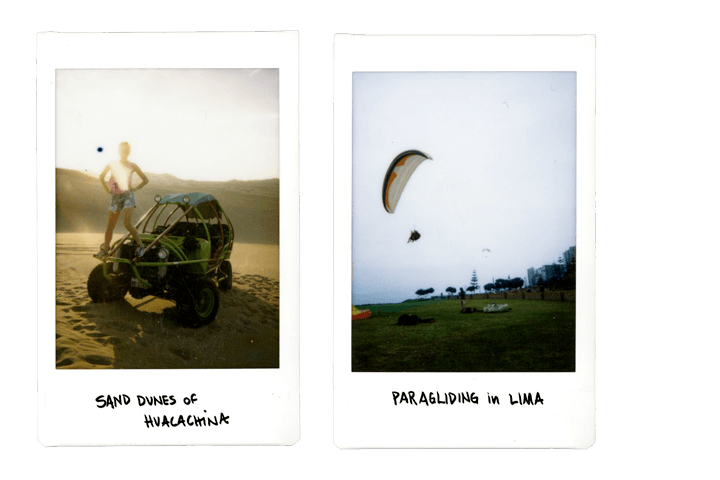 Polaroids lend themselves to fleeting moments, and its okay if the picture isn’t perfect. So when it comes to candids vs action shots, I think save the candid dinner-table shot for your iPhone, and let the Polaroid capture those moments when you don’t have time to say “Ok. 1… 2… 3.”

On my last night in Arequipa, as Alex has already mentioned, we were having quite a bit of fun and as a result—I got a little photo happy.  But these pictures are some of my favorites! 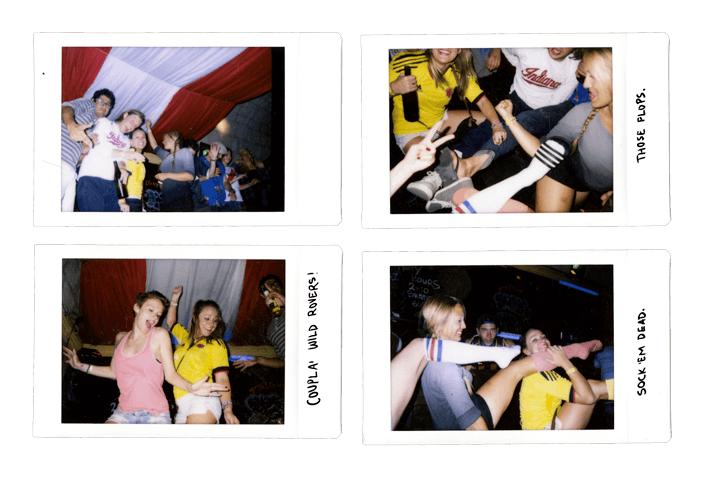 One of my favorite things about the instant film is that you can give these out as gifts.  This was especially important in Peru, a country where the locals are often viewed as part of the scenery.  Alex already mentioned in previous posts how she sometimes felt uncomfortable taking photos of the local people (unless it was their livelihood!), and how we were even shooed away a couple times. Contrarily, I had one really great experience with my camera on the Inca Trail. On our first day, as we were taking a long break, a young girl came up the path with a large colorful sack.  She barely looked at any of us but said hello to our guide in her native Quechua. We were all somewhat in awe of her strength and curious where she was coming from and going to.  A little while later, I was ahead of most of the group and I came upon her resting.  When she saw me she got up and started walking.  We walked for about five minutes, paces apart and in silence, while I translated a question in my head. 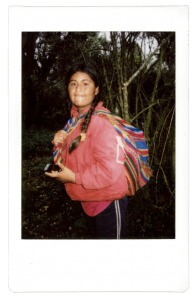 My broken Spanish went like this: “Permiso, Senorita? Puedo tomar un photo para tu? Dos photos, uno para mi y uno para tu. Un regalo para tu?” (Excuse me, miss? May I take a photo of you, one for me and one for you. A gift for you?) She smiled very sweetly, was probably confused by me saying that I was giving her “a gift,” and stood still.  I pulled out my camera “uno… dos… tres” and handed the film to her.  From the way she looked at the little card, I couldn’t tell if she had seen a Polaroid before or not.  She didn’t ask me anything, just smiled. Then I said “Y uno para mi,” and snapped the second. In my picture, you can see the first photo in her hands. As we were both waiting for them to expose, she was looking at the black side instead of the white. I told her to flip it around.We both walked on, both too shy to talk, and with time her quickened pace separated us gradually.

I saw her again at the the next meeting spot, selling local energy drinks and corn beer that had been concealed in her sack. She smiled at me when I walked by, which I took to mean “Gracias.”

So do I regret traveling with just my Polaroid? No. I prefer tactile over digital (don’t even get me started on the Kindle debate), and I doubt that will go away anytime soon. I am putting all of my Polaroids in a simple book soon: void of the usual scrapbooking stickers and more simply a housing. When I want to revisit these memories, I’d sooner pull out this book than hook up an external hard drive and search for the right folder. It would be nestled among folders from other trips taken over the past decade that I haven’t revisited since. In terms of sharing these images, I think people are more interested in the tale than the snap. My dad traveled around Europe for a summer when he was my age (with the same backpack I brought to Peru, Burning Man and Thailand!) and I just realized I have never asked him if he took any photos. My mom has a stash of letters he wrote as well as a journal he kept, and it’s these stories, recounted over the years, that have given me a real sense of his experience during that time. 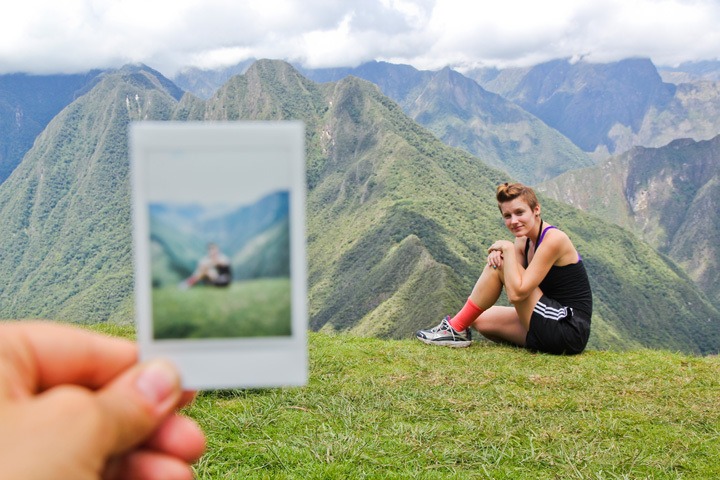 All in all: I know the Inca Trail will never be as beautiful as it was in person, and I know a photo will never be able to convey how I felt waking up everyday in the Andes mountains. But alas, ask me how many times I’ve flipped through Alex’s Peru album on Facebook and I’ll be honest: a lot.

Muchas gracias to Zoe for sharing with us! Would you guys ever take a big trip with just a Polaroid camera to document it?

My Summer Behind a Lens

The Great Escape: Month 29 Roundup Back to the Dunes
41 Comments...