Hi, y’all! It’s Tucker again, back as promised with Part II of my Martha’s Vineyard Memorial Day weekend coverage. Now, first things first, as I know you’ve probably been unable to shake this haunting question since my last post — what is up with my haircut in these photos?

Well, here’s the scoop: Mom and Mimi get along on most things in life. They occasionally quibble over what movie to see at The Spectrum, or whether or not one of them is paying enough attention to the other, and other typical mom and daughter stuff like that. But there is one topic in which the claws really come out (and believe me, as somedog who has gone to battle with an actual cat, this is more than just a metaphor), and that topic is how short a cocker spaniels’ hair should be cut. You know, the really important stuff in life. Anyway, Mimi took me to the groomer right before mom got back to the US, and turns out there was a little “miscommunication” at drop off. You couldn’t cut the tension with a well-timed squeak toy deployment if you tried. (And try I did.) 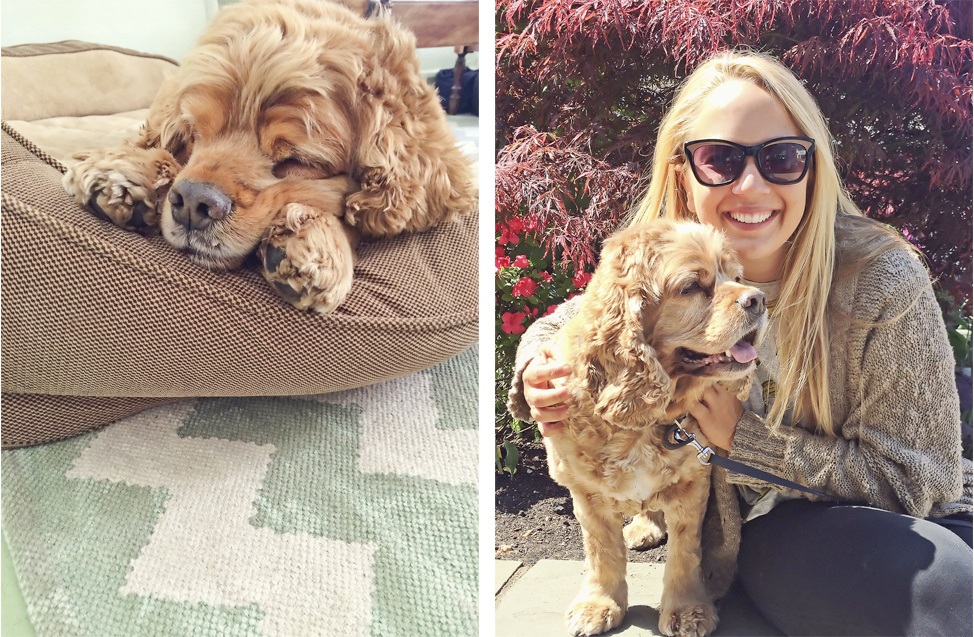 Thankfully I’m cute enough to pull of any haircut, when it comes right down to it! But anyway, back to Martha’s Vineyard. (And don’t even think about trying to get a doggie haircut there over the summer, by the way. Mom called about a bath in May and the on-island groomers were booked through September!)

After our up-island adventure, I was pooped. The next day, the humans set off on a serious bike ride — twenty-seven miles from Oak Bluffs to Edgartown and across the Chappaquiddick ferry down to Wasque Point, the most Southeastern point on the island. I decided to stay home and monitor the perimeter of the property for intruders instead. 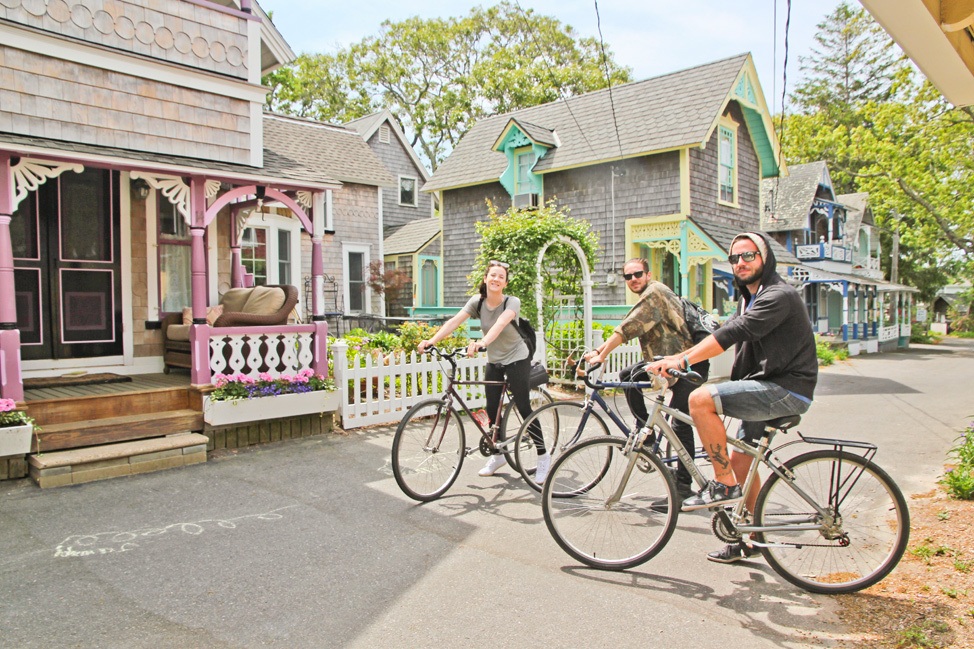 They didn’t get far out of Oak Bluffs when mom decided it was time for the first pit-stop — lunch at island favorite Sharky’s Cantina followed by drinks at the still-relatively-new Bad Martha’s Brewery. This was an important stop, as we learned that Bad Martha’s is totally pet friendly! It’s the perfect place for the whole family to kick back for an afternoon — there’s a fun tasting menu, brand new (and fantastic) appetizer offerings, sassy merchandise for sale and Bad Martha-branded old fashioned games for entertainment.

It was the perfect refueling pit stop. 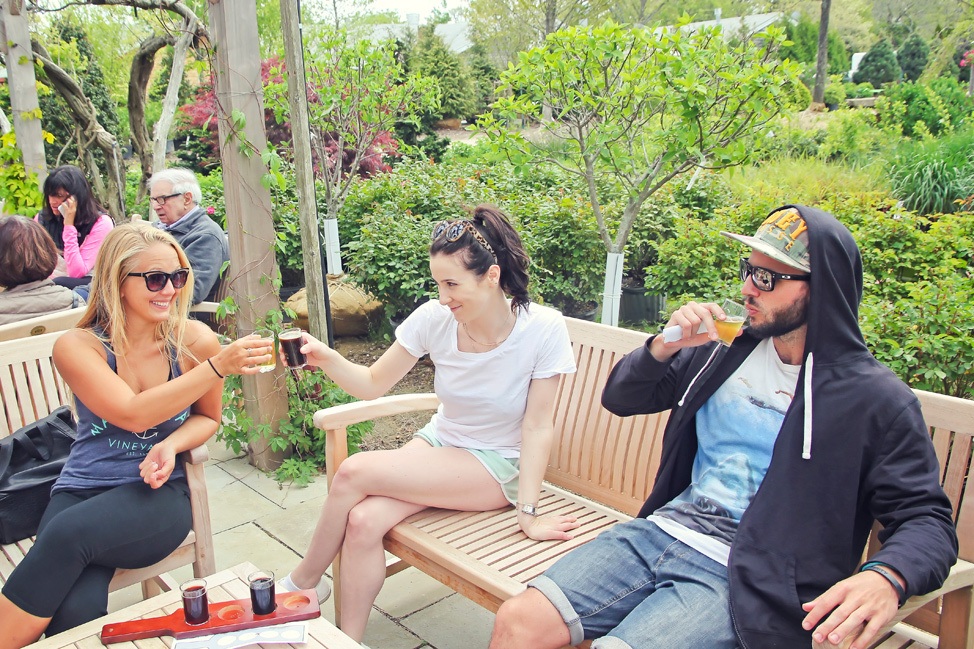 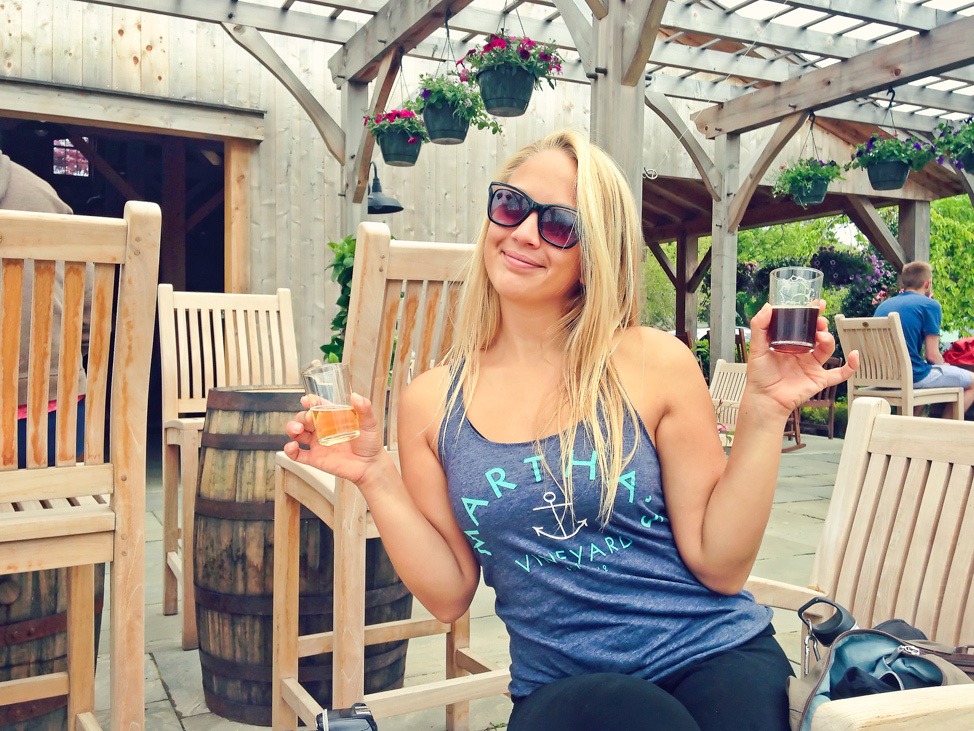 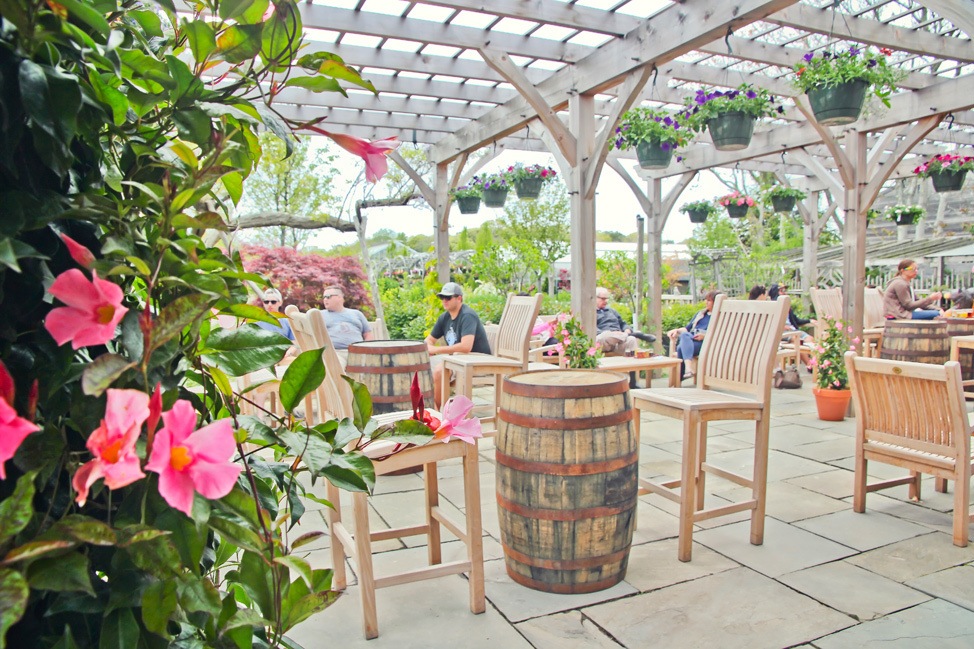 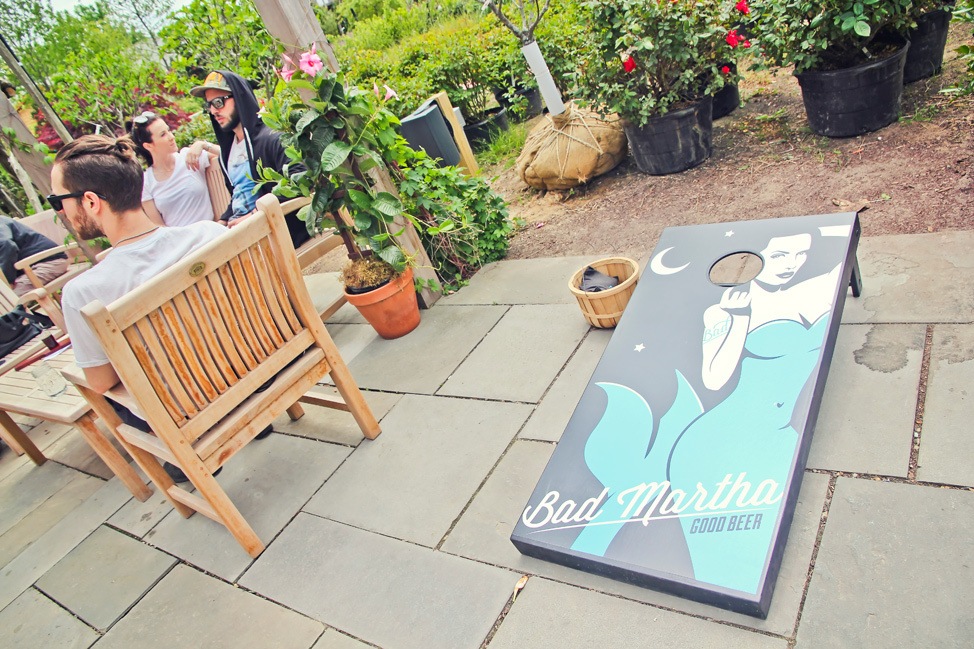 Properly fueled, their next step was to take the Chappaquiddick Ferry across the short sound. On a beautiful sunny day, that ferry looks like this: 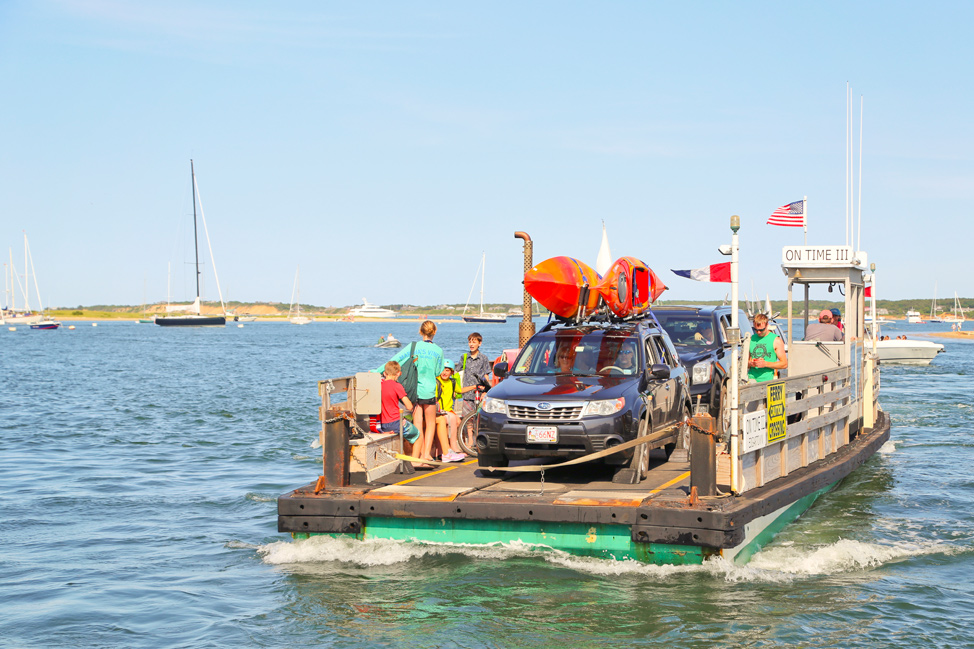 On a not-so-sunny day, it looks a little more like this: 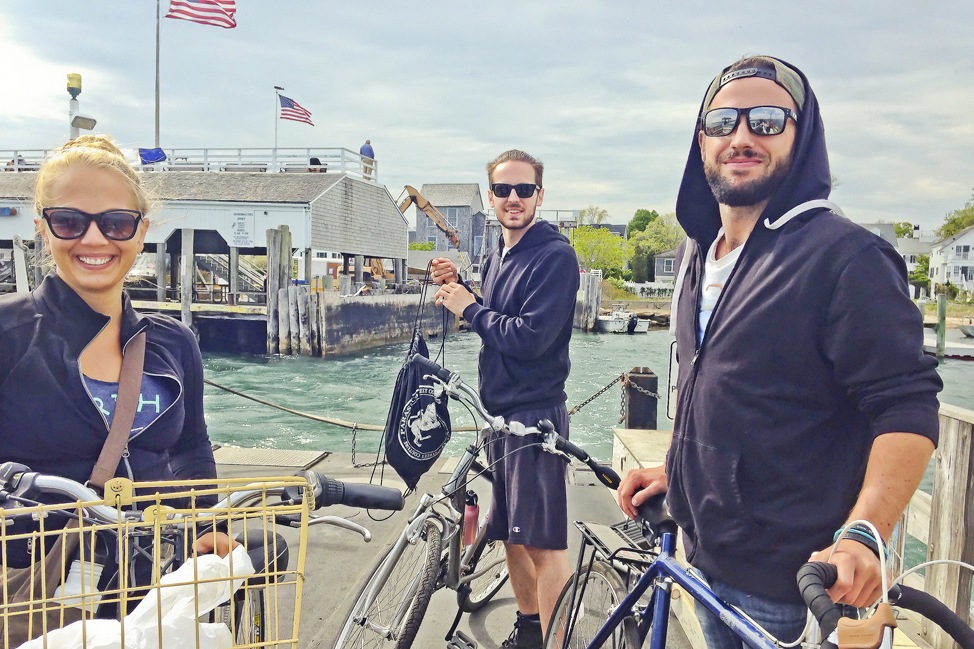 Yet another reason I was glad I stayed home. This dog does not do well in the rain! Personally, I simply refuse to go out in it — though I have trained my humans to take me out under a low-held umbrella when the situation gets dire.

Thankfully for mom and her pals, the clouds never broke into rain on their ride. Rather, they set a moody backdrop for a classic New England excursion. 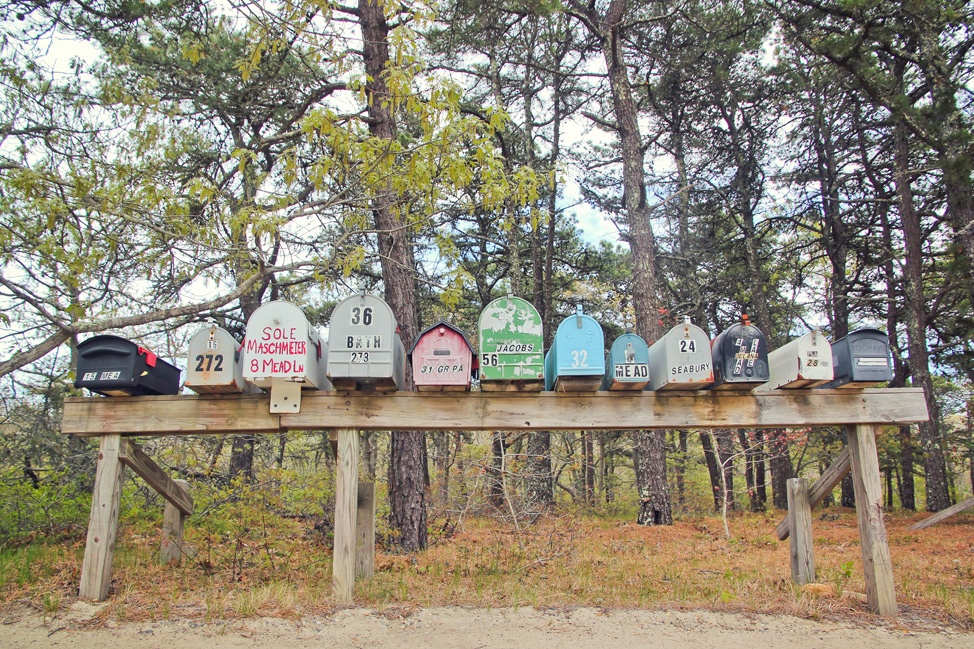 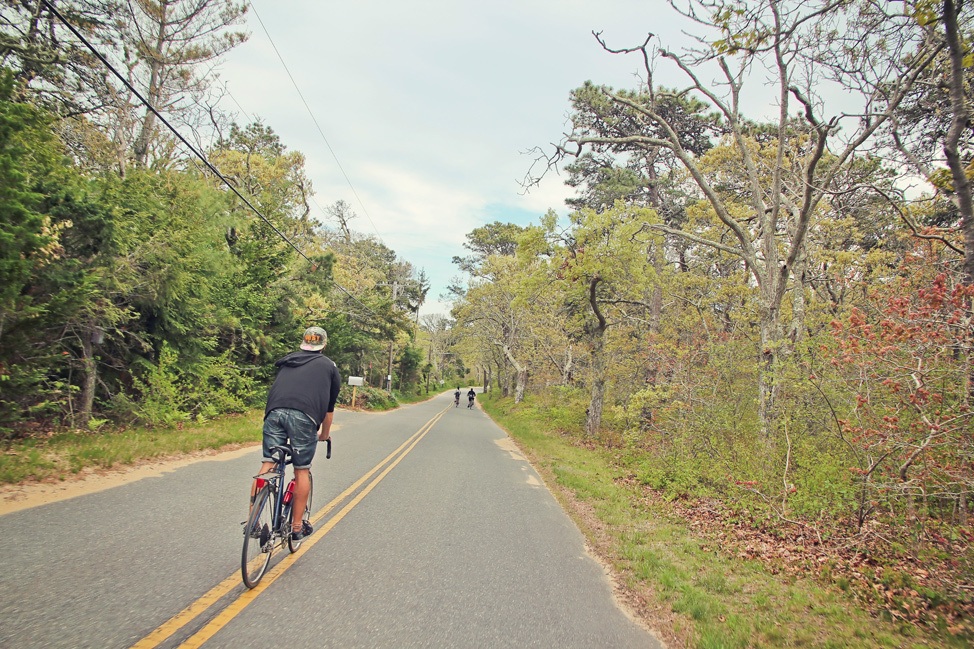 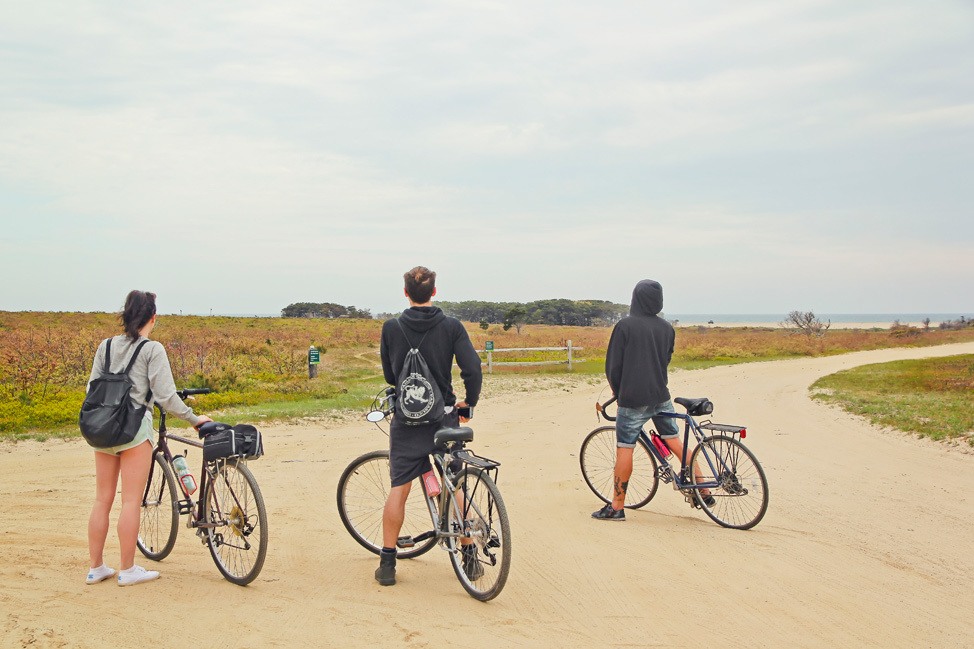 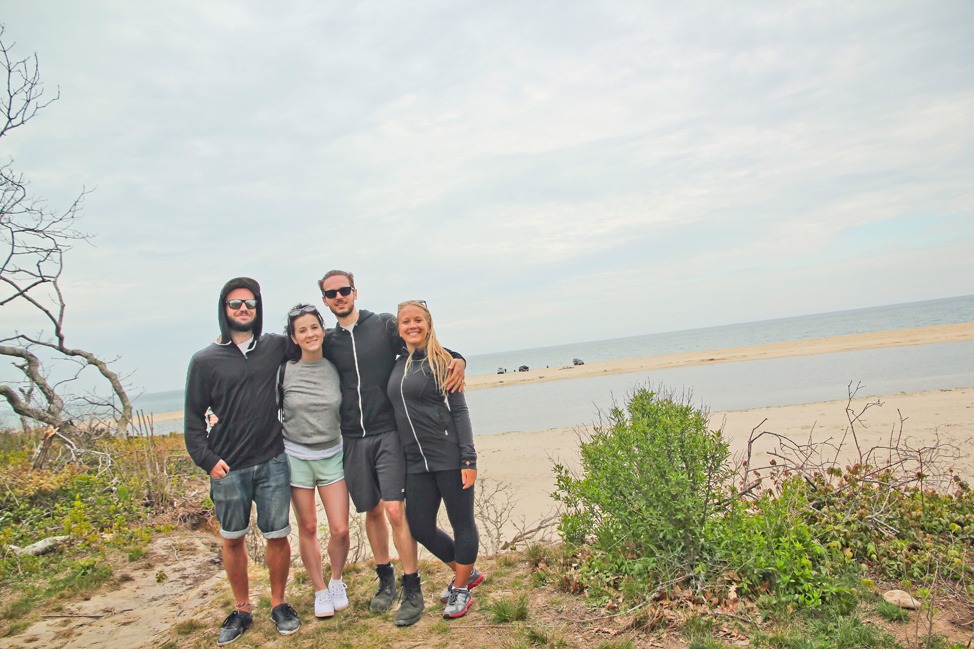 Now, when mom showed me these photos, I gave her my signature side-eye. I mean, really. Sure, there were no other humans around, and sure, your Canon Rebel T2i has a great self-timer. But if a tree falls in a forest and no one is around to be embarrassed, did you still bring shame to your dog? The answer is yes. (I minored in paw-losophy.)

Mom said whatever — if they ever start a band, they’ve got the album art covered. 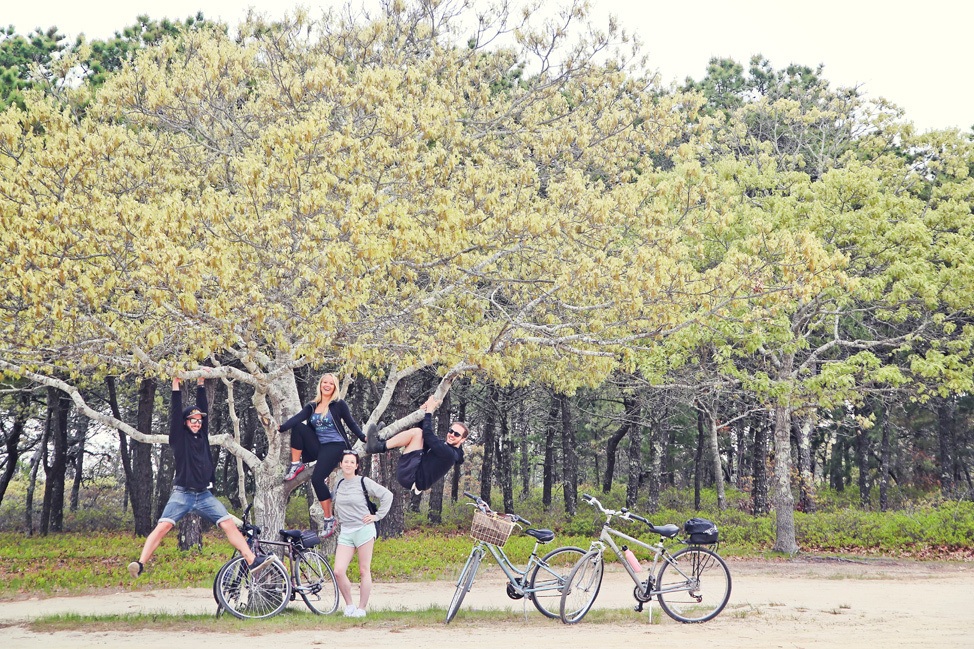 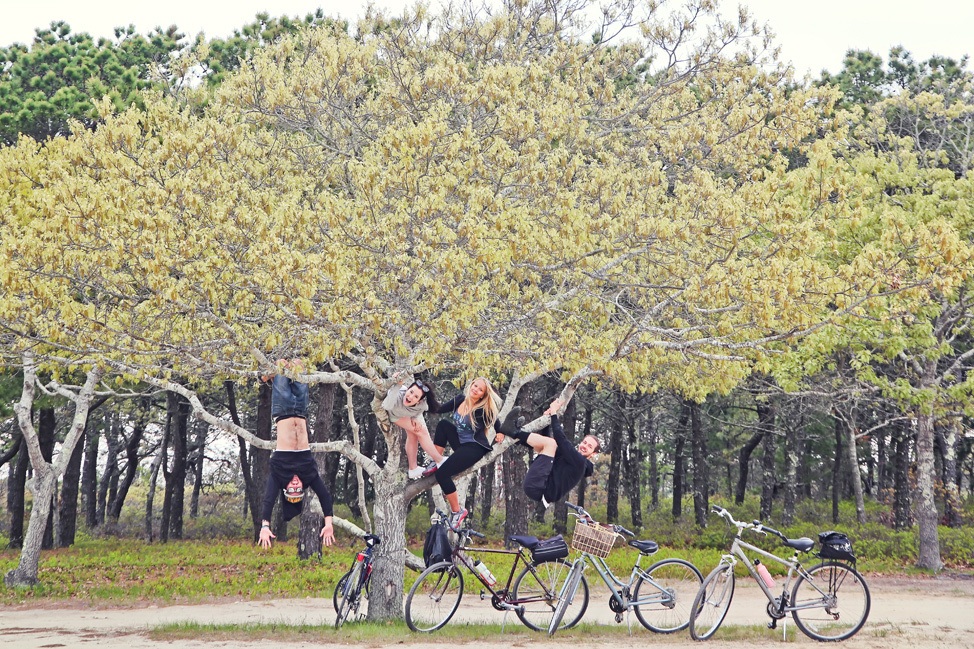 After a sweaty return home to shower and relax and shower me with Tucker time, the gang headed out again for one last meal as a group (mom and Ian were on the island for five days, but just had their hosting hats on for three of them).

The destination? The Port Hunter, which mom has been yakking about trying for ages. More to come in her upcoming post about the islands’ best restaurants, but suffice it to say they came home happy — and so did I, thanks to a small serving of leftovers. Score! 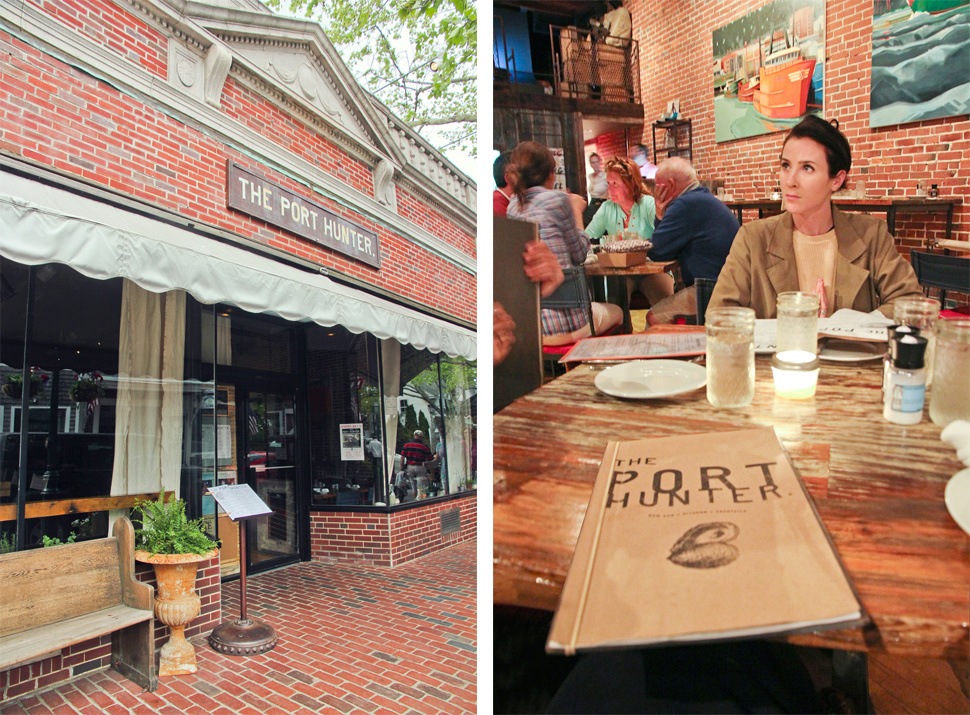 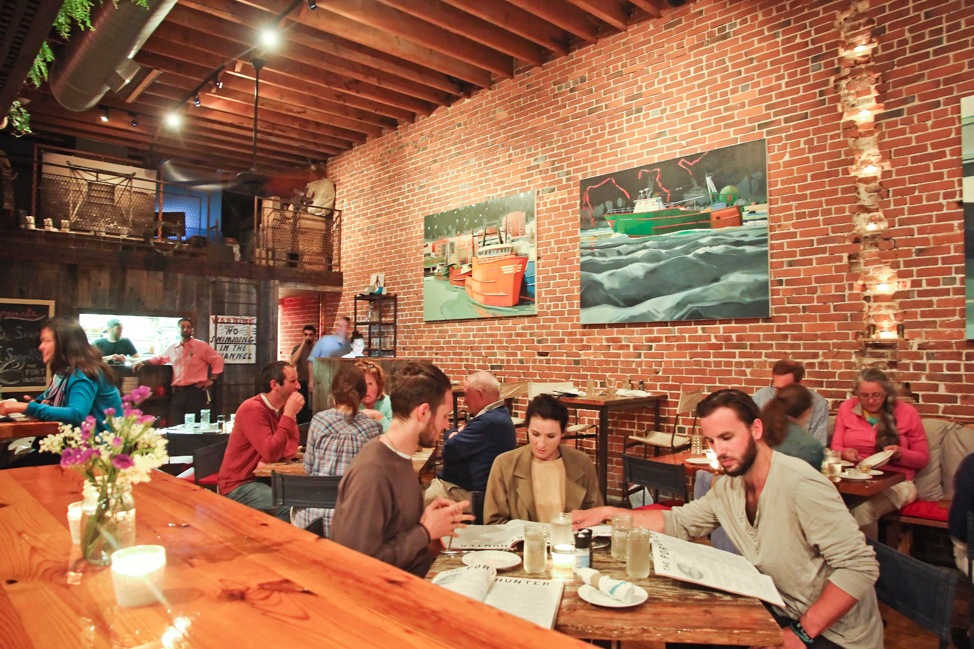 The next morning, there was one final meal on the docket. Another place mom’s been itching to eat at for ages, despite their offensive lack of dog-friendly seating: Art Cliff Diner. I’ll never understand why humans line up for hours to sit in a restaurant when there are perfectly acceptable dumpsters out back with not a moment of wait time, but what do I know — I’m only a total garbage-eating connoisseur!

Anyway, Art Cliff is one of those where the wait is almost always brutal. But Aunt Liz and Uncle Matt (we got pretty close over the weekend) had timed their trip to arrive on Saturday and depart on Tuesday, cutting their flight costs in half. Another benefit to staying an extra night after the Memorial Day weekend crowds had departed was sailing into a hotspot for dinner on Monday night and brunch on Tuesday morning, no reservations necessary. 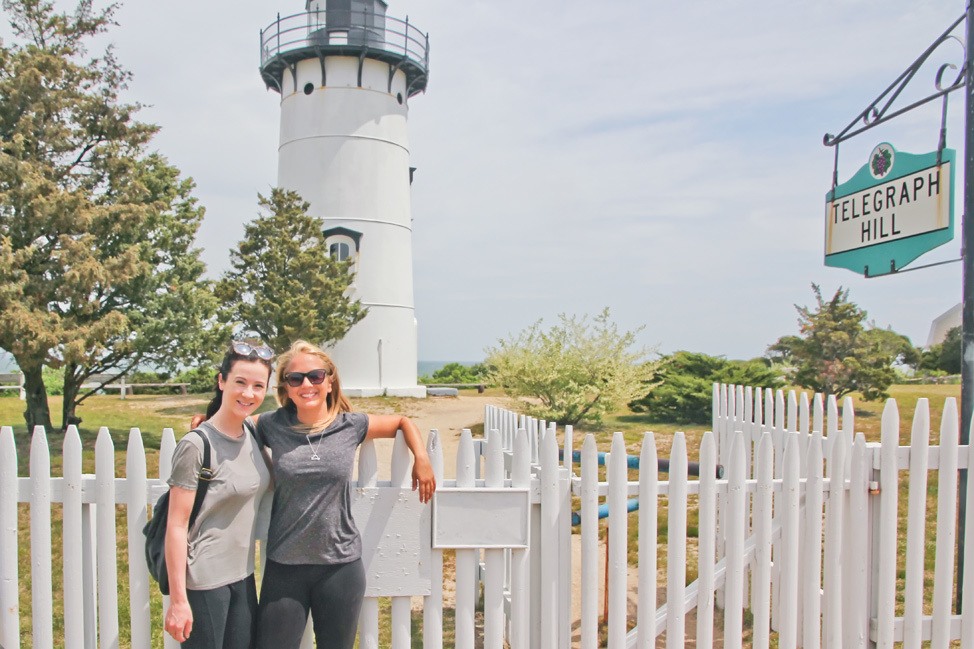 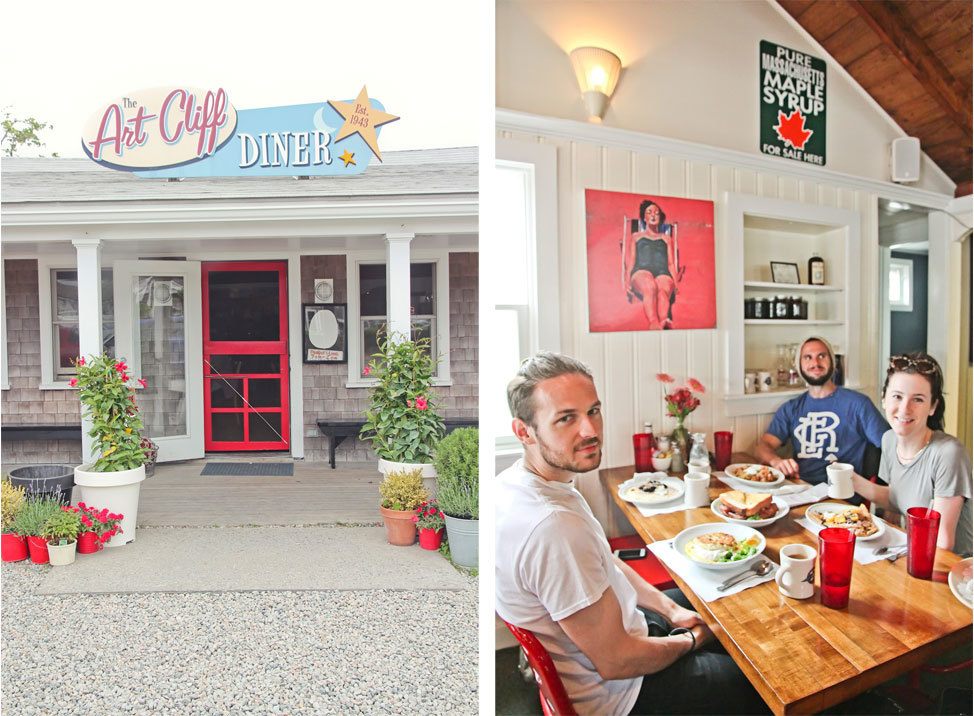 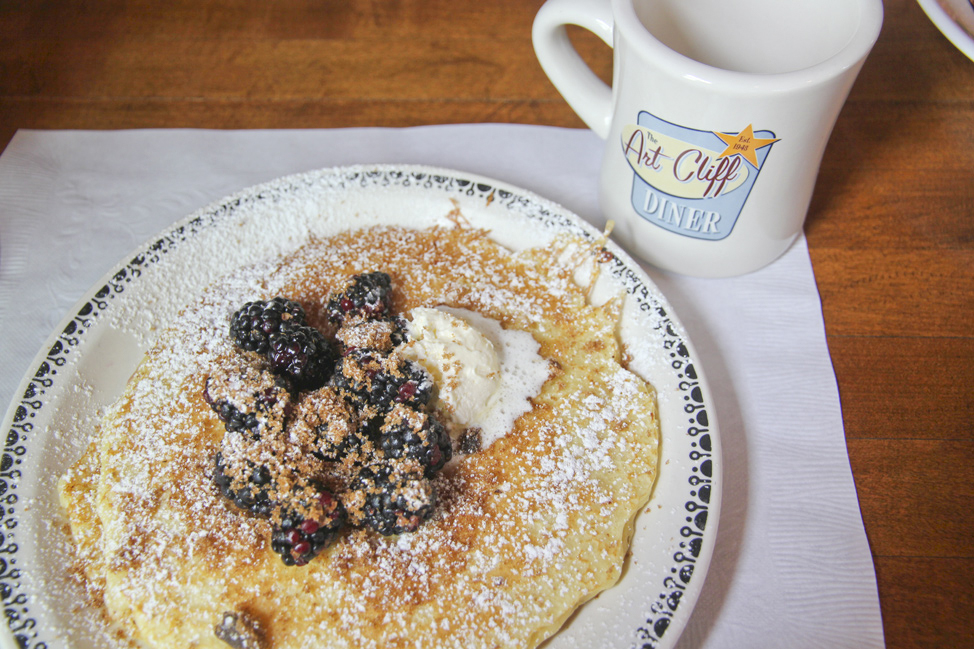 Yeah, it was another great trip to Martha’s Vineyard. Personally, the highlight was the discovery of Good Dog Goods, a pet shop within walking distance of our pad in Oak Bluffs. This might not be the most dog-friendly island around — restaurants with seating for pet owners is limited, we came up short when we tried to hunt down the islands’ rumored unofficial dog park, and beach laws are fairly restrictive to pups. But hey, there’s always panting on the sidewalk over a delicious ice cream and getting fawned over by my adoring fans, am I right?

All I know is that as long as I’m with my humans, I’m happy. 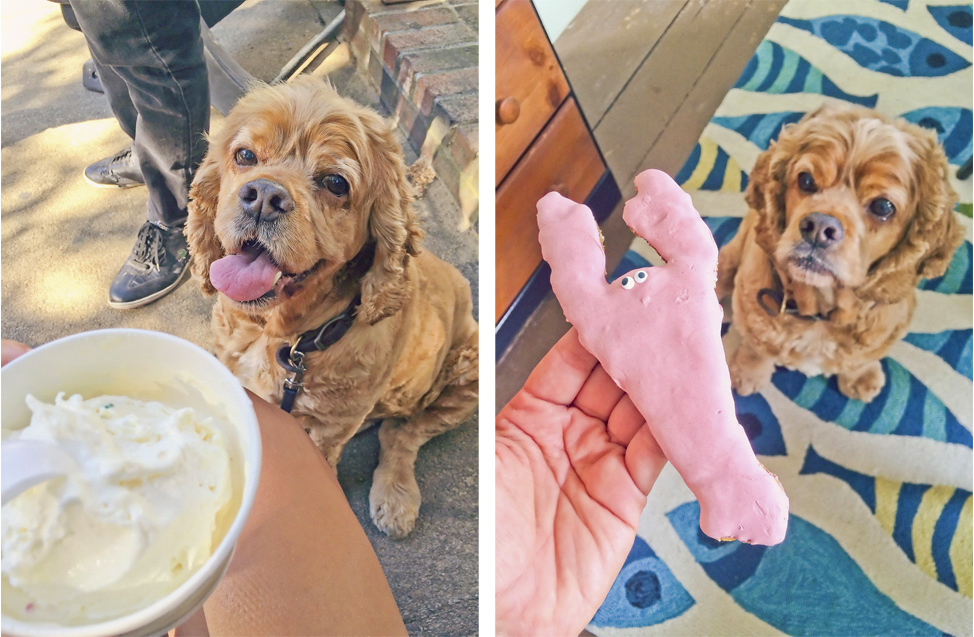 My Island from Above: A Spontaneous Martha’s Vineyard Biplane Adventure