Into the Deep in Mancora

Diving in Peru? It might not be one of the first adventure you associate with the country (the Inca Trail just steals all the thunder, doesn’t it?) but we’d soon discover it was an unexpectedly impressive one.

Originally we had attempted to dive in Lima, tempted by the offshore sea lion colonies. But the prices were ridiculously high and the conditions were poor, and in the end we were grateful we stayed on the surface. Luckily, our diving dreams were given a second chance when we arrived in Mancora and found Spondylus, the first PADI-certified dive center in Peru. 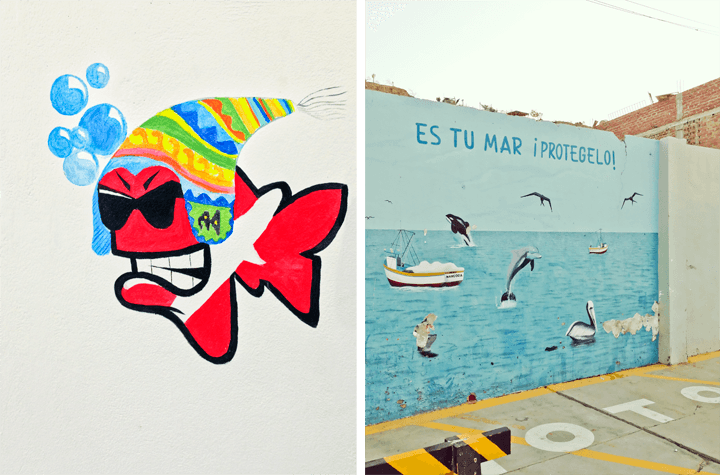 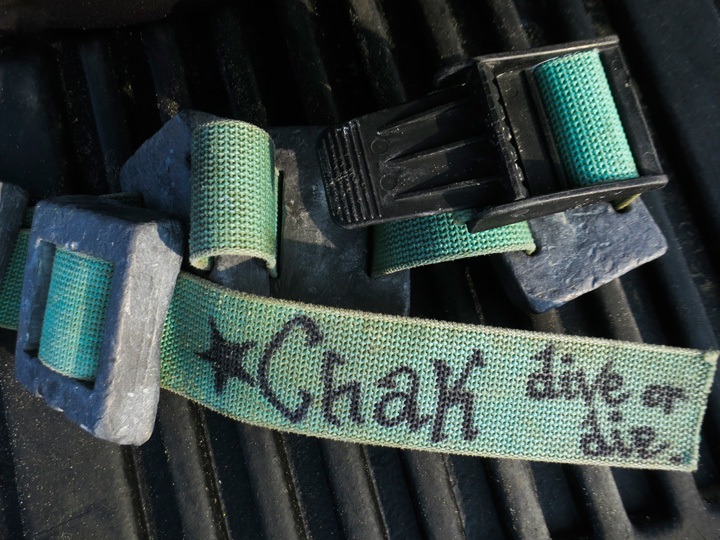 Spondylus offers three main options for certified divers: (1) A two tank beach dive trip for 270 soles or $96USD (2) A two tank dive at an abandoned oil platform for 295 soles or $105USD or (3) A two tank dive to the Punta Sal reefs for 320 soles or $114USD. Obsessed with the idea of diving with the sea lions who often sun themselves on the oil rig platform, we chose the second option.

On the drive out to the dive site I marveled at the life story of our dive guide, Chak. He’s seven years into what he labels a “pretty slow,” completely unbroken journey from Mexico to Argentina. He has no plans to return to his native Spain before completing his mission, though two years ago his mother did break down and visit him in Panama. That is hardcore travel, ya’ll. 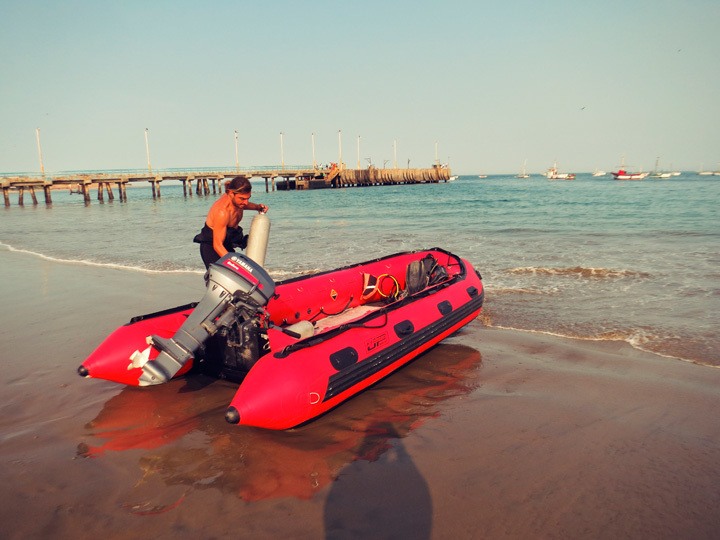 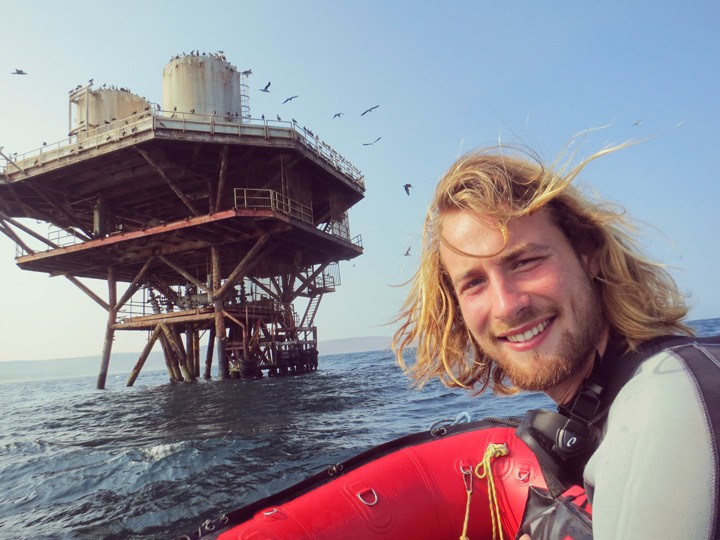 Soon we were bouncing along in an inflatable dinghy towards the platform. While I focused all my energy on a failed mission to not become motion sick, Anders narrated the trip with a running list of the various sea birds sailing overhead.

When we arrived at the platform I was in pretty rough shape but my mood was buoyed by the enormous sea lions lazing on the platform. Chak had told us they sometimes got curious and came down to say hi to scuba divers, and we were crossing our fingers for just that. 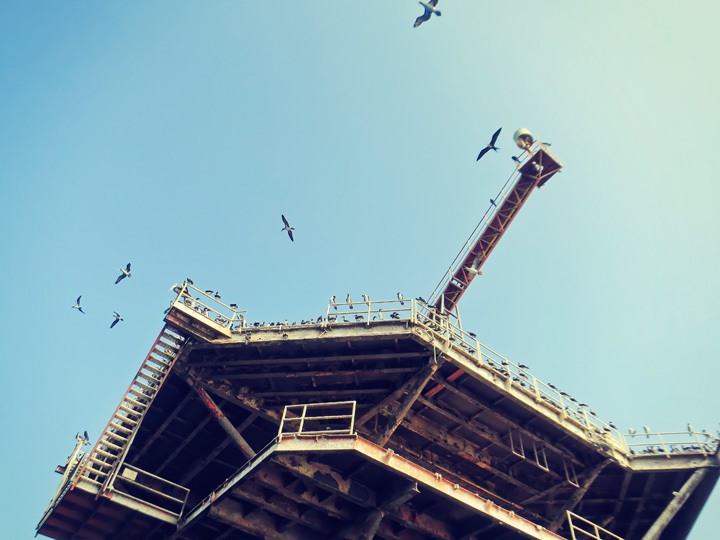 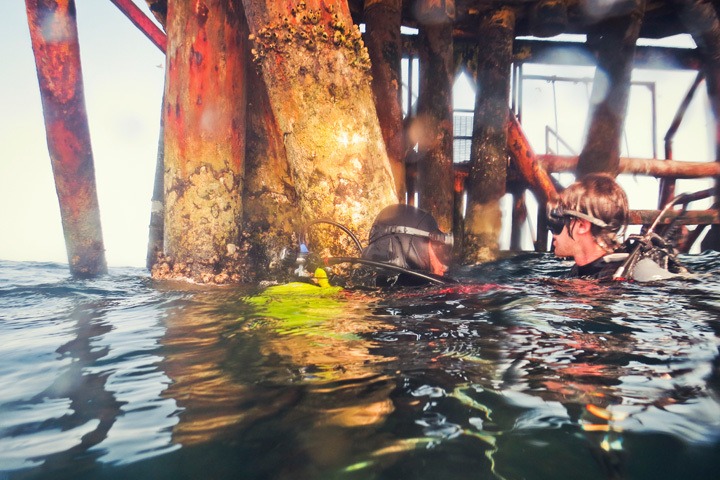 When I jumped in I felt a jolt through my body as the cold water seeped into my wetsuit. We knew the water would be chilly, but damn — at one point our dive computers read 63 degrees Fahrenheit! Chak was working with an Advanced Open Water student and gave Anders and I a lot of latitude due to our experience, which we appreciated. Still, there was a strong current, visibility was low and it was freezing — I didn’t stray far. 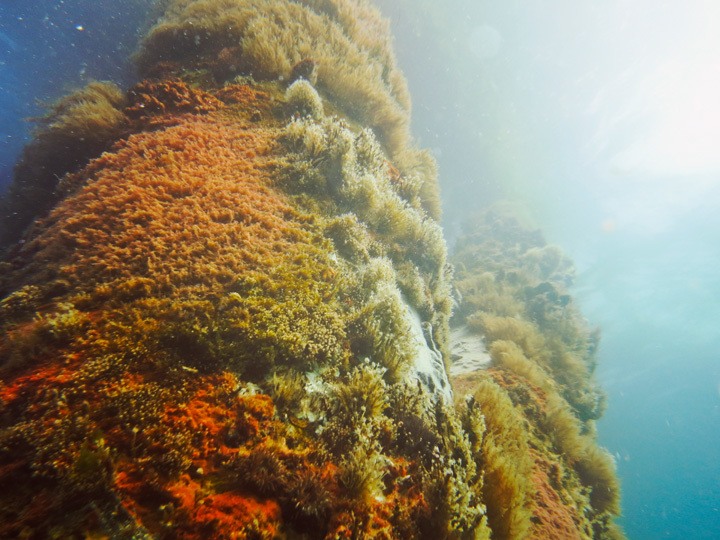 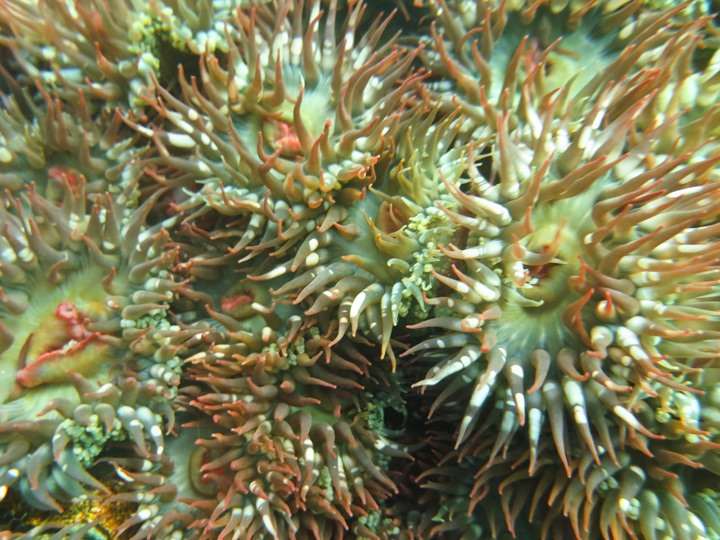 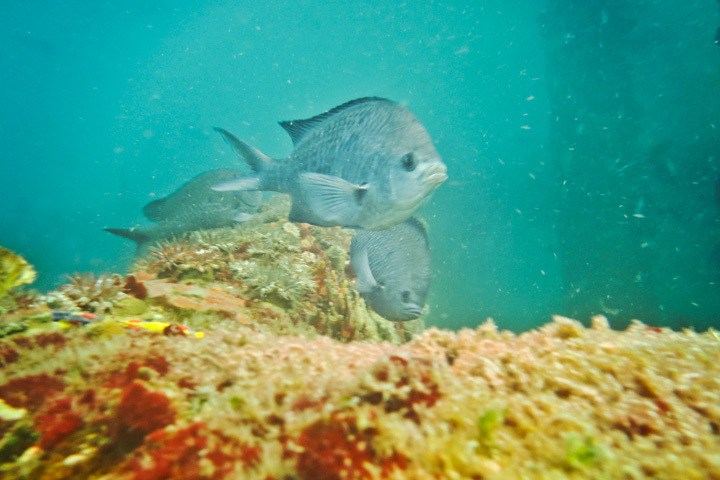 I think I could have handled the conditions much more gracefully had my camera not fogged uncontrollably, rendering it useless. I managed to salvage a few of the photos from the early moments of the fog-fest, but I was so frustrated underwater that when Anders signaled to me that he wanted to end the dive after 28 minutes, I was happy to ascend. Despite my training level and over a hundred dives (perhaps more, I gave up on keeping track!) low visibility makes me nervous and so combined with my extreme discomfort this wasn’t the most pleasant dive for me. 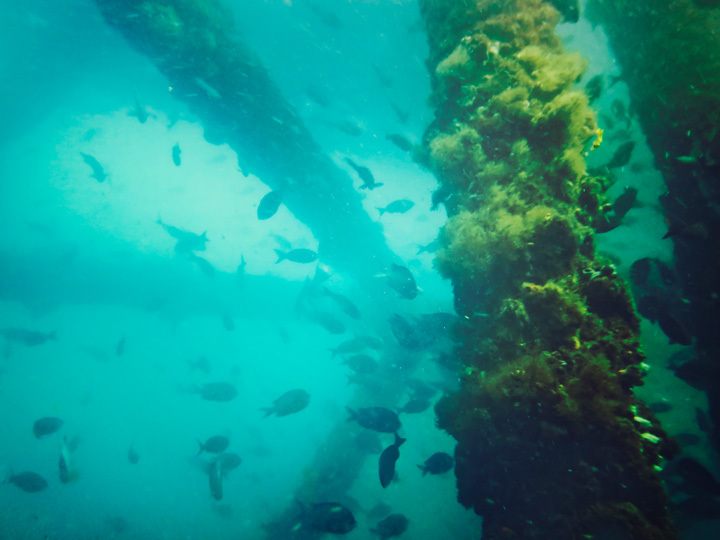 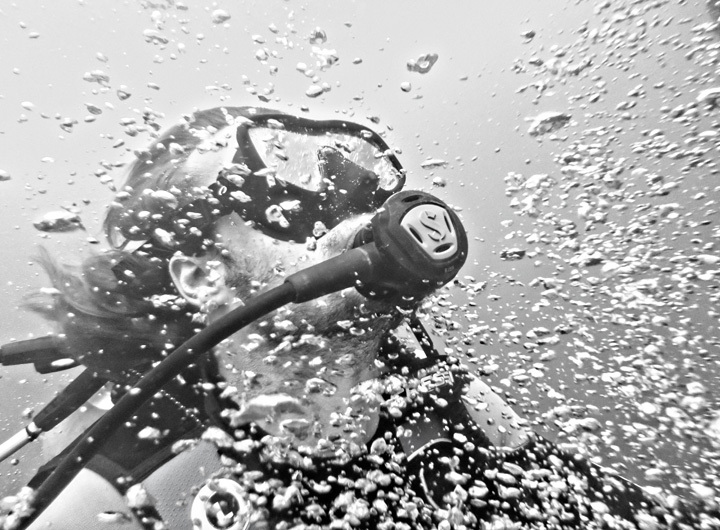 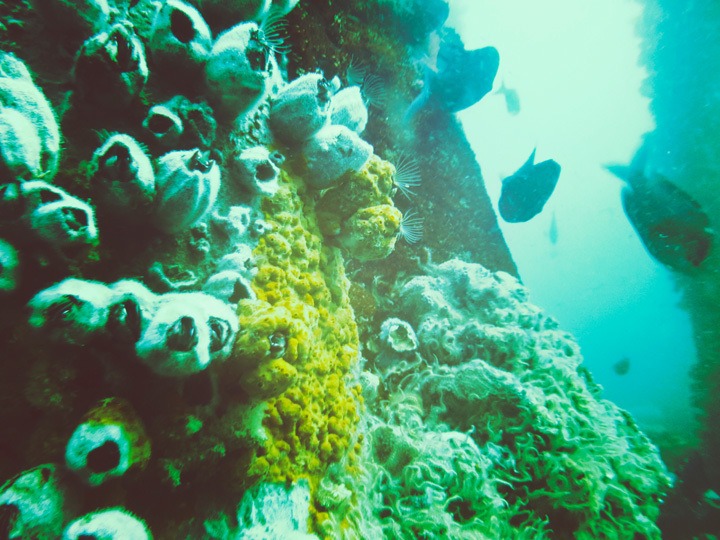 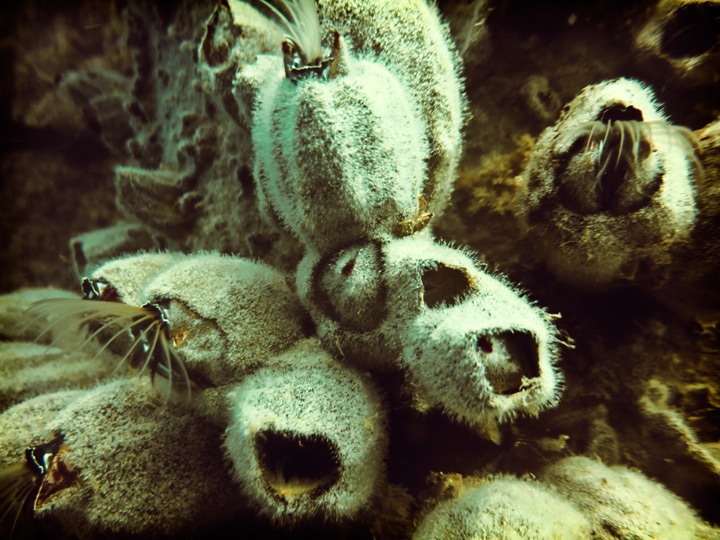 While I wouldn’t consider these photos to be up to my usual standard of underwater photography, they do give an idea of the eerie mood of this dive site. 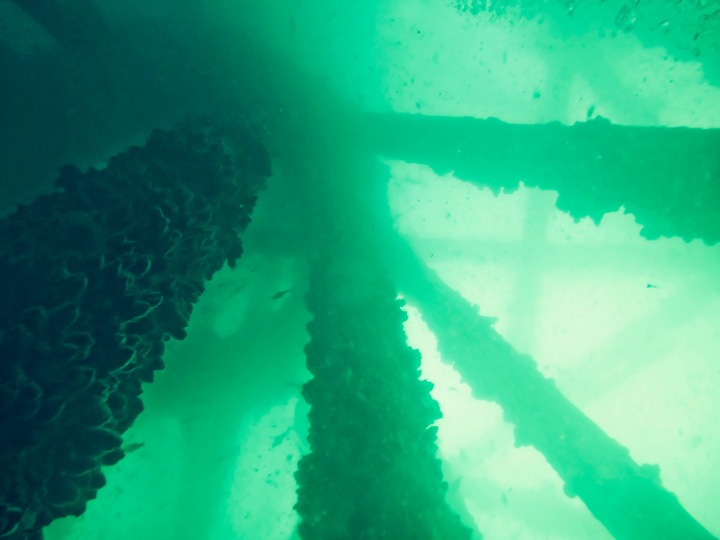 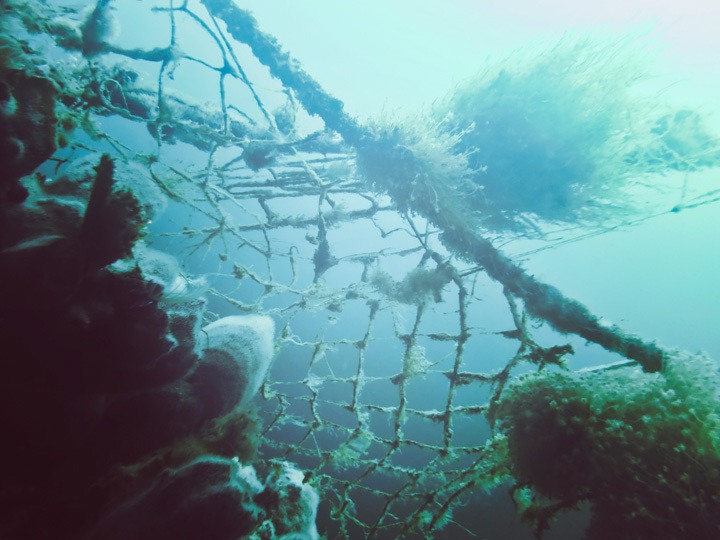 Chak’s student was nearly a popsicle by the time we were back on the boat and refused to go back for a second dip. As I was dreading the idea of a surfing interval bobbing at sea, we were more than happy to agree to do our second dive at the Organos Pier.

While only a few degrees warmer, this dive was much more my style. The water was only a degree or two warmer but the current-free, shallow waters were far less intimidating. This is a fishing peer, so discarded fish bones and heads gave me the feeling of being in a fish graveyard at times — but there was also plenty of life. Huge schools of tiny silversides swarmed around us, pufferfish lurked behind every pier column, and teeny tiny stingrays darted out from the sand beneath us. The highlight was spotting five seahorses perched in the sea grass. Five! 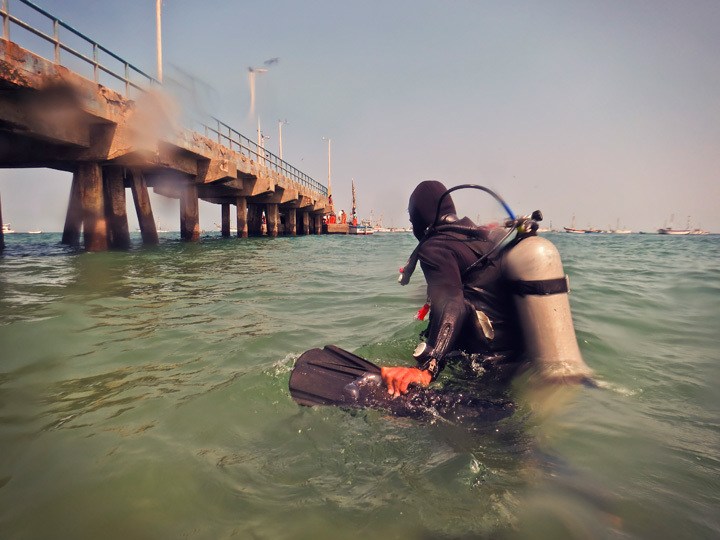 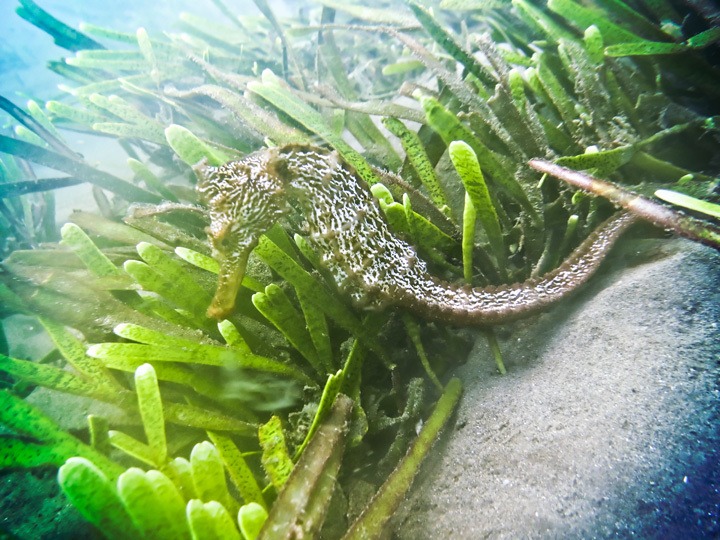 This time my camera fogged within seconds and thus I barely bothered turning it on. Luckily, Anders was diving with his GoPro and despite the not film-friendly conditions he managed to put together a short highlight reel of our dives in Peru. 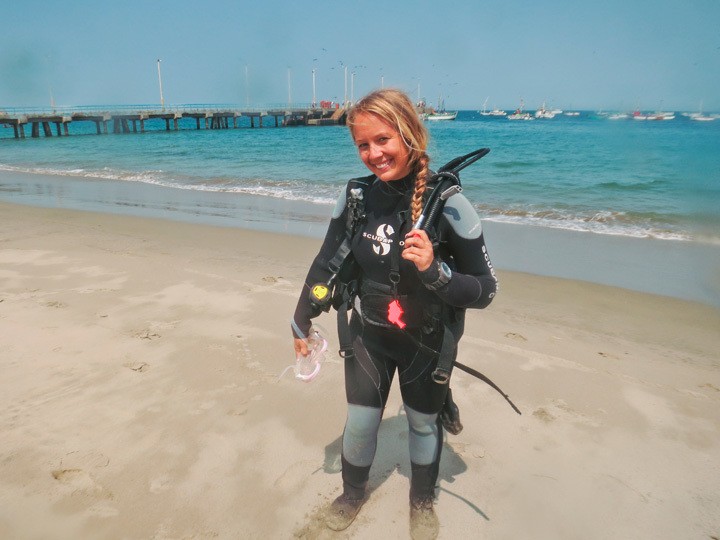 Overall, diving in Peru was better than I hoped and colder than I dared imagine. While Mancora isn’t going to make the cover of Scuba Diving magazine anytime soon, it’s a unique experience at a decent price — and um, did I mention the seahorses? If you’re someone who likes to dive in quirky destinations — Iceland and Cambodia have given me some decent diving cred — this is a must-do in Peru. Just double up on the wetsuits — trust me. 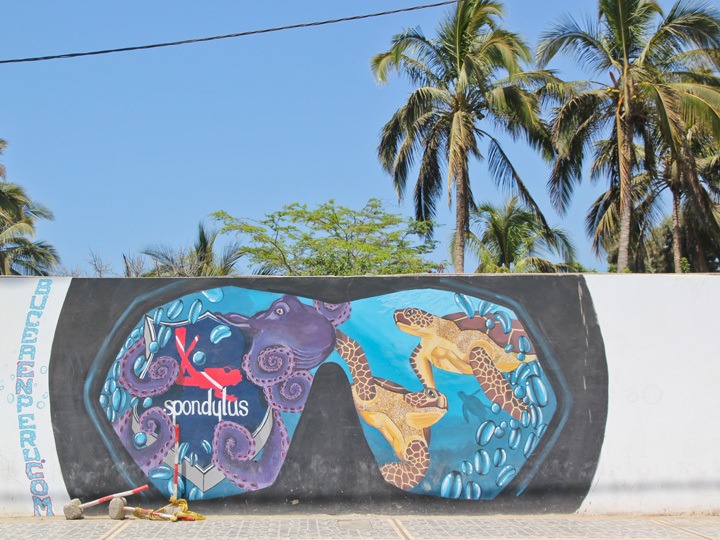 What’s the most offbeat destination you’ve dived in?

Let’s Talk: Can You Make Local Friends on the Road? The Great Escape: Month 30 Roundup
49 Comments...