Despite the seven destinations on the itinerary, Month 30 felt like a laid-back breeze compared to the one before it. That probably has to do with the fact that two out of the four weeks were spent in places I’d already been once before, which released me from any pressure to sightsee or play tourist.

This was a work-heavy month in which I compensated for a lot of the playing-hooky I did when I first arrived in Peru. Yet amid all the return-destinations and freelancing projects, I found time to fall head over hells for three totally new places — Paracas, the Puerto Maldonado jungle, and the North Coast hotspot of Trujillo. 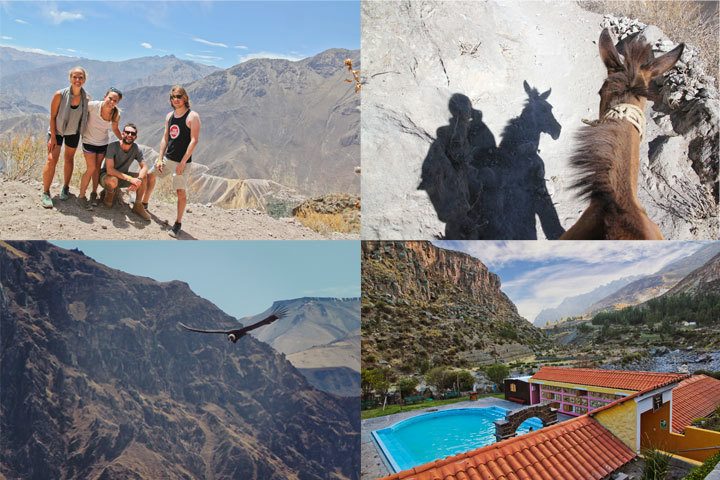 adventures in the Colca Canyon 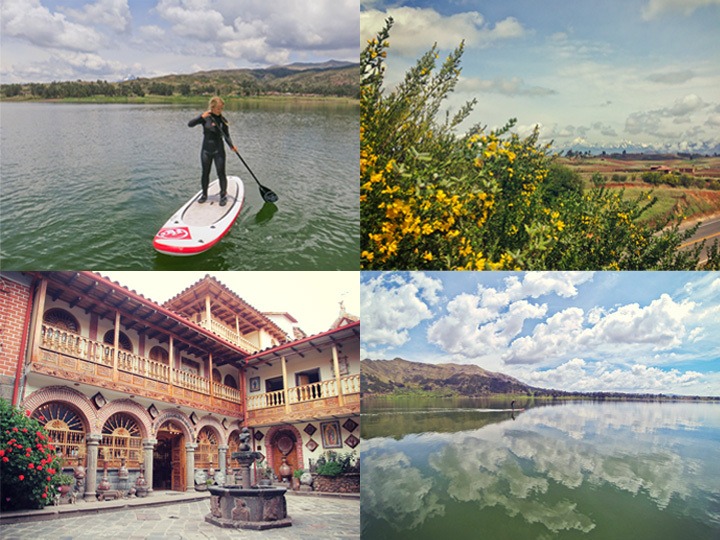 a different side of Cusco the second time around

• Getting lost in the Colca Canyon. Okay, we mostly got lost on our way to the Colca Canyon, but the point is we didn’t know exactly what we were doing and that was exactly what I needed. Last month I lamented a lack of adventure thus far on this trip — well here it was.

• Hugging Anders hello again. It felt surreal to see this guy I met in Indonesia and had last seen in New York walk into my hostel in Peru, but it’s a good metaphor for the crazy life we lead…

• Getting to do the highest SUP tour in the world! Talk about taking your hobby to a new level.

• Having a whole week in Cusco to myself where all I did was the aforementioned SUP tour. It was blissful to catch up on work and have some much-needed me-time.

• Returning to Huacachina a second time and getting one more chance to laze around the Banana Bungalow pool. I love that place something fierce!

• Meeting up with Leah, who I met in Arequipa and convinced to join me in the Colca Canyon, once again in Paracas. She was working at the hostel we were staying at, which made our four days there feel like a getaway to a friend’s vacation house.

• Seeing penguins in the wild. As a major animal lover it’s always a thrill to see animals living happy and healthy in their natural habitat, and the Ballestas Islands were the prime location for it!

• ATV riding through the Paracas National Reserve. My last time trying this particular activity was pretty lacking in adrenaline. This tour more than made up for that!

• Having a pisco sour in the hotel that claims to have invented the beloved cocktail.

• Seeing Catching Fire on the big screen. I loving going to the movies and take every chance I get to do so while traveling!

• Eating at Amaz. Lima’s dining scene is infamous, and I hadn’t really had a chance to see what all the hype was about — so I was thrilled when one of my contacts proposed a business meeting here.

• Seeing two jaguars in the rainforest! Granted, we saw all kinds of crazy wildlife out there. But jaguars undoubtedly take top bragging rights. I still can’t believe it happened.

• Waking up to the sound of howler monkeys screaming through the canopy. I love the sound of the jungle, and thanks to our open-wall rooms, there was absolutely nothing between us and it.

• Kayaking through a rainstorm. Nature took no mercy — it was amazing to be in the heart of the storm and feel that force all around us. It was humbling!

• Having the ruins at Chan Chan all to ourselves. It was the perfect end to our three days in the charming Trujillo/Huanchaco area — a stop that blew my expectations away. 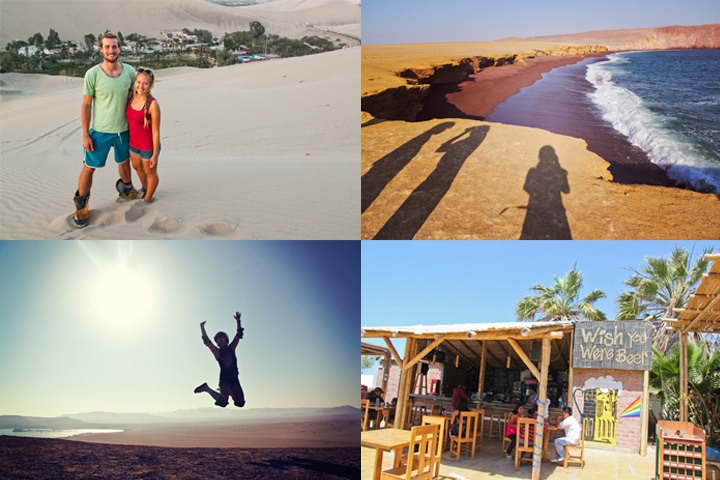 shimmying up the South Coast

• Feeling guilty over riding a donkey out of the Colca Canyon. I know plenty of people do it, but it just didn’t feel right to me, and I did it anyway because I was lazy. Now that’s a serious recipe for self-loathing if I’ve ever heard one.

• Losing everything! Somehow in the space of a month I managed to lose track of two pairs of sunglasses, my sarong (a sentimental gift from a friend on Koh Tao), my travel towel, my Neosporin, my carabiner, and my wooly hat from Cusco.

• Getting sick in Cusco. Getting the flu is a part of life but I find it particularly horrible to be having feverish dreams when staying in the Party Hostel from Hell with all kinds of unpleasant noises assaulting your brain.

• Being left out of the conversation. For much of this month I was traveling with a group of three Scandinavians who understandably preferred to speak their primary languages. While I get that it isn’t fair to expect others to speak English for my benefit, it was frustrating to be left staring into space so often at the dinner table.

• Losing my sea lion footage. I’m still devastated over this. People are like, “you have the memories!” And I’m like, “I have the memory of a ninety-year-old who has suffered many brain injuries! I want my goddamned videos!”

• Spending a small fortune on shipping. Dude, Peru’s mail system is painfully nonsensical. After carefully procuring, packing and labeling two boxes to send home for Christmas (one for each side of the family), I arrived at the post office to learn that you are charged by the kilo — rounded up. Which meant that while I had 1.1 kilos (seriously) in one box and .5 kilos in the other, I ended up paying for 3 kilograms, a whopping $85 bucks. Ouch!

• Spending Thanksgiving without my family. It was really sad, and it made me vow to be back in New York on that day next year.

• Freaking out over internet in the jungle. When will I learn? I should have known that the internet connection at the most remote jungle lodge in all of South America would be less than fiber-optic fast. Yet I relied on being able to use it to finish posts, send files, and all kinds of other things I absolutely should have done before I left. It was stressful and stupid and I missed out on the best howler monkey sighting of the week while in the lodge battling my email. Stupid, stupid, stupid.

• Burn out. By the end of this month I was literally dying for a break. While I’d slowed down a bit, I’d still been on the road for two full months and heavily on the move. Luckily we were headed right towards the eleven day travel pause I was craving. 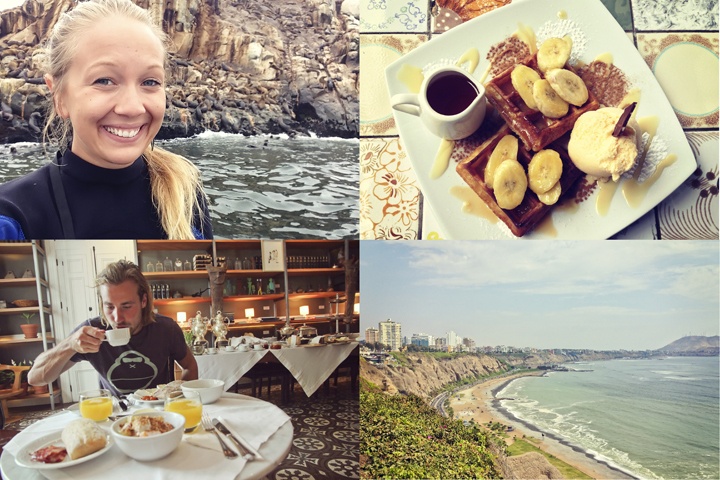 • When we arrived in Lima Anders went to drop off our enormous load of laundry. The guy taking it weighed it and claimed it would be forty soles. “Forty soles!,” Anders replied. “How about thirty?” The clerk mulled it over before returning with a counter offer — twenty five soles. Um, we accept.

• While we didn’t fall for this particular trap, we overheard many tourists struggling with confusion over the menu vs. the menú. In Spanish, the former is called la carta and the latter is a cheap, set daily lunch. Cue a look of shock on the face of the person who requested the menu and was presented with the menú — a plate whatever the restaurant felt like serving that day, slammed down in front of them.

• “I think this one is pine and this one is oak, I’m not sure….” Our guide in Lima didn’t even try to fake his confusion over some of the facts.”This is the Ministry of Public Relations…or is it Public Affairs?” The winery guide in Ica was equally straightforward as he answered a question about whether or not a certain bottle would be found in a typical Peruvian home — “This? No, no no… this is not a good wine!” Great. We’ll take ten bottles.

• While recounting the horrors of another traveler finding a chicken foot in their soup, Anders found a chicken foot. In his soup. No further commentary necessary.

While I started out the month strong — hiking the Colca Canyon, going to the world’s worst gym in Cusco and getting an intense SUP workout, things went downhill from there. I went for a run in Lima and two more once I reached the beach again in Huanchaco and that was it for exercise. Yes, we were doing pretty active stuff in the jungle but not enough to offset the massive amount of delicious desserts I was shoving in my face.

My eating was totally out of control at this point. The discovery of Kit Kat McFlurrys (seriously is it fair for something so delicious to even exist?) set me on a sugar binge that lasted for most of the month. It wasn’t until we got to the beach and I took stock of myself that I really faced how bad things had been and decided to start making some changes, though I’m still struggling to get back to a positive routine. 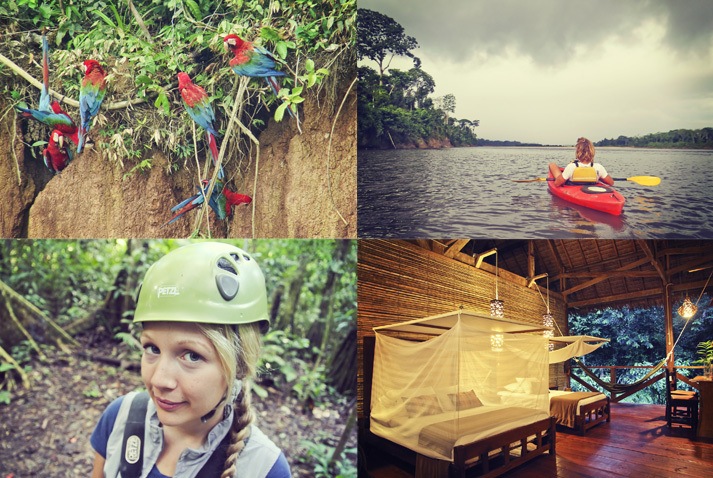 back to the jungle

Month 29 was pretty out of control for me, budget-wise — I spent over $2,400! So I needed to reign things in big time in Month 30. Luckily, it was pretty easy — without big ticket items like the Inca Trail, I spent a full thousand dollars less without really trying. I clocked in at $1,385 total. My biggest expenses were the flight to Puerto Maldonado and back ($143), tips for our jungle guides ($75), a luxury overnight bus from Cusco to Ica ($63), ATV riding in Paracas ($40) and shipping Christmas gifts home to my family ($85 — just for shipping!)

Not only did I spent a grand less than I did in the previous month, I also doubled my income. Cue my happy dance! The influx of freelancing projects and advertising deals meant I spent much of Month 30 working, but I was happy to do so thanks to a more relaxed pace and several repeat destinations.

Just ten more days in Peru before crossing the border into Ecuador! 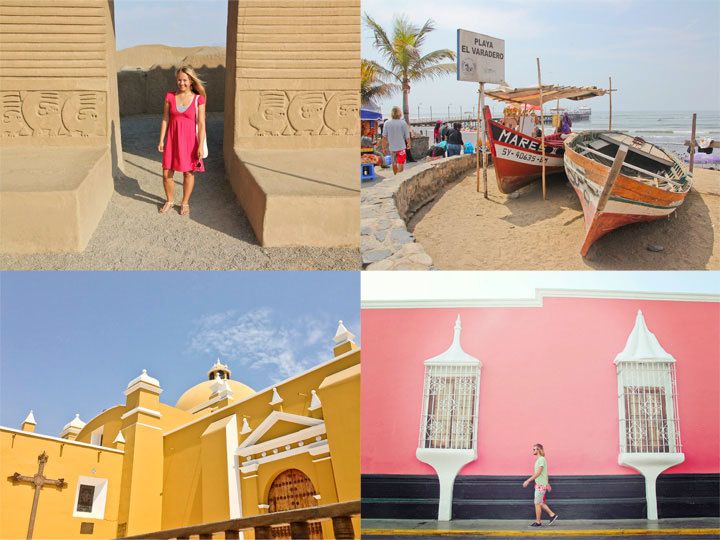 up the North Coast we go

It’s been quite a trip — I hope you’re enjoying coming along for the ride. Thank you, as always, for spending some of your day with me!

Since I left home for my Great Escape, I’ve been doing monthly roundups of my adventures filled with anecdotes, private little moments, and thoughts that are found nowhere else on this blog. As this site is not just a resource for other travelers but also my own personal travel diary, I like to take some time to reflect on not just what I did, but how I felt. You can read my previous roundups here.

Back to the Dunes