Gorgeous and Beautiful Ghent and Bruges

With Tomorrowland fast approaching and my days in Belgium numbered, I was itching to see more of the country outside the capital of Brussels. I’d heard rave reviews for the medieval Flanders towns of Ghent and Bruges, and while in the perfect world I would have spent a few days exploring each, I had just twenty-four hours to spare. And so guidebook and camera in tow, I hopped on Viator’s Ghent and Bruges Day Trip from Brussels to get a crash course in Belgium’s most charming cities.

I was about to be wowed. 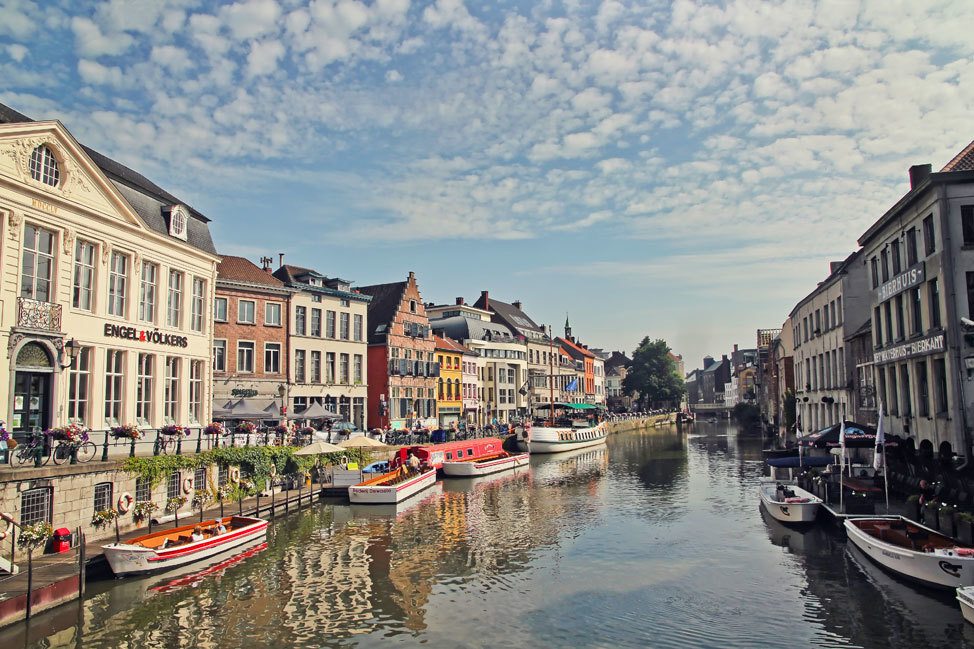 From the first moment we stepped off the bus in Ghent, I thought to myself, now this is the Belgium people fall in love with. I kind of felt like I was in a Ye Olden Days of Europe™ Disney theme park. I mean come on! From the pristinely maintained castles to the fluffy white clouds dotting the sky, it could not have been better had good ol’ Walt designed it himself. 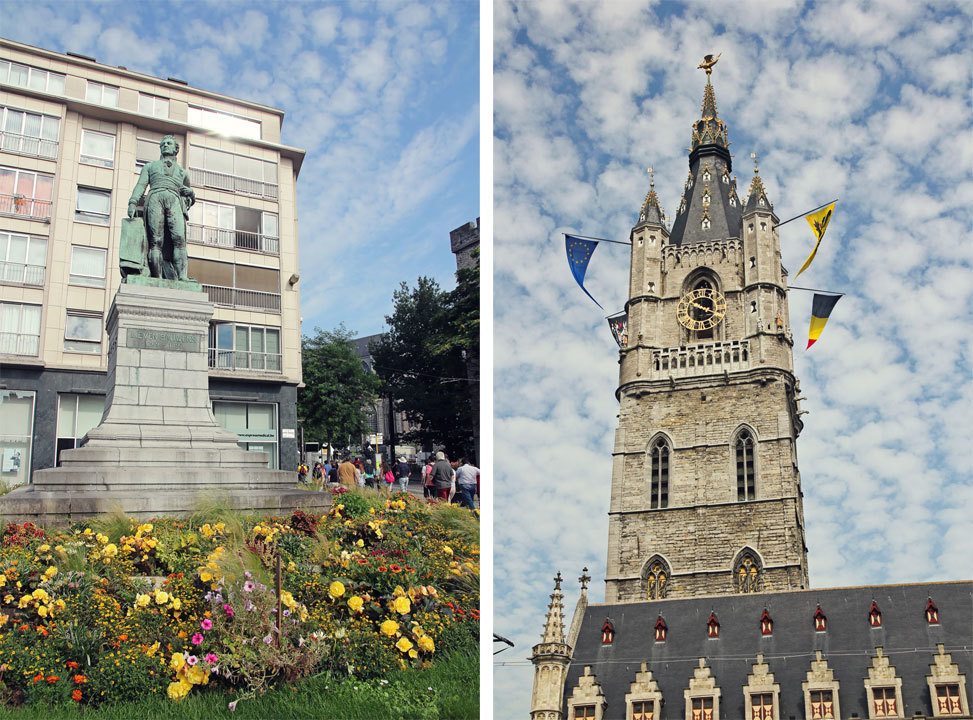 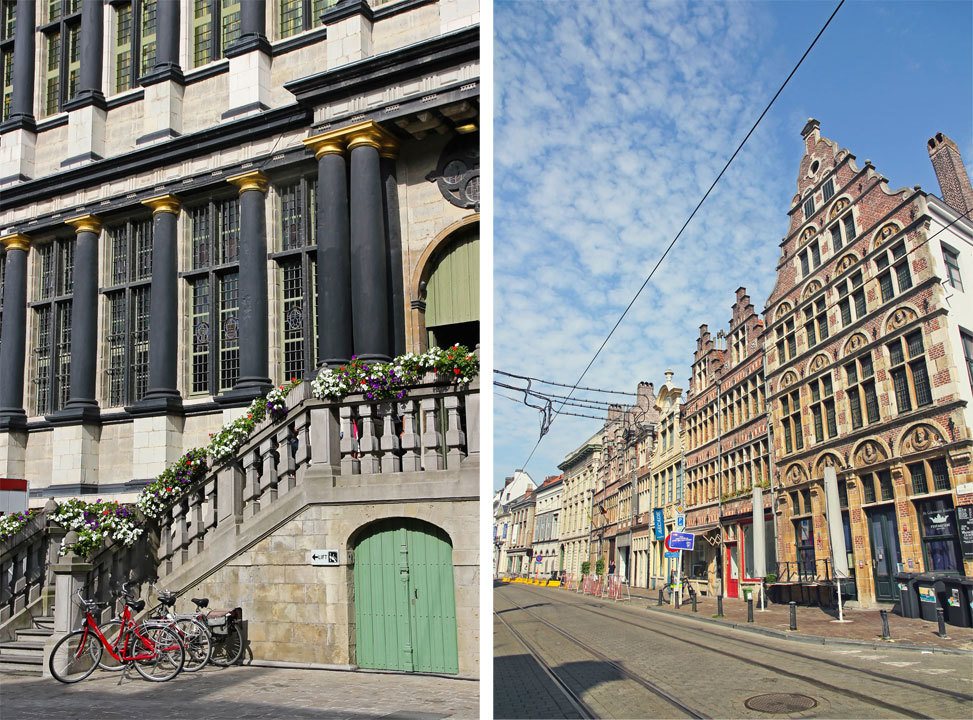 The tour guide led us on a brief walking tour around the city, though with such a large group size and my penchant for hanging back to take a billion photos, I kind of hung towards the back and did my own thing. I was beyond thrilled to simply wander the colorful streets and marvel at all the history seeping from every cobblestone.

I later learned that I had been in town right in the midst of the famous annual Gentse Feesten festival. It had been so early in the morning that there were nothing but hints of a celebration the night before — if only I had known! However, I now have a very good excuse to return to Ghent someday in the future. 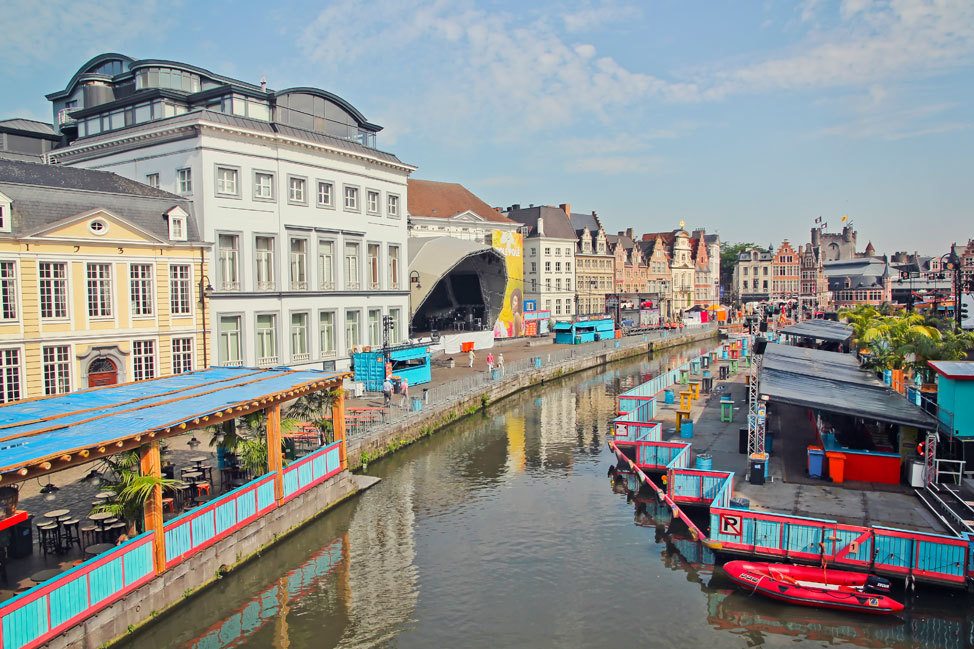 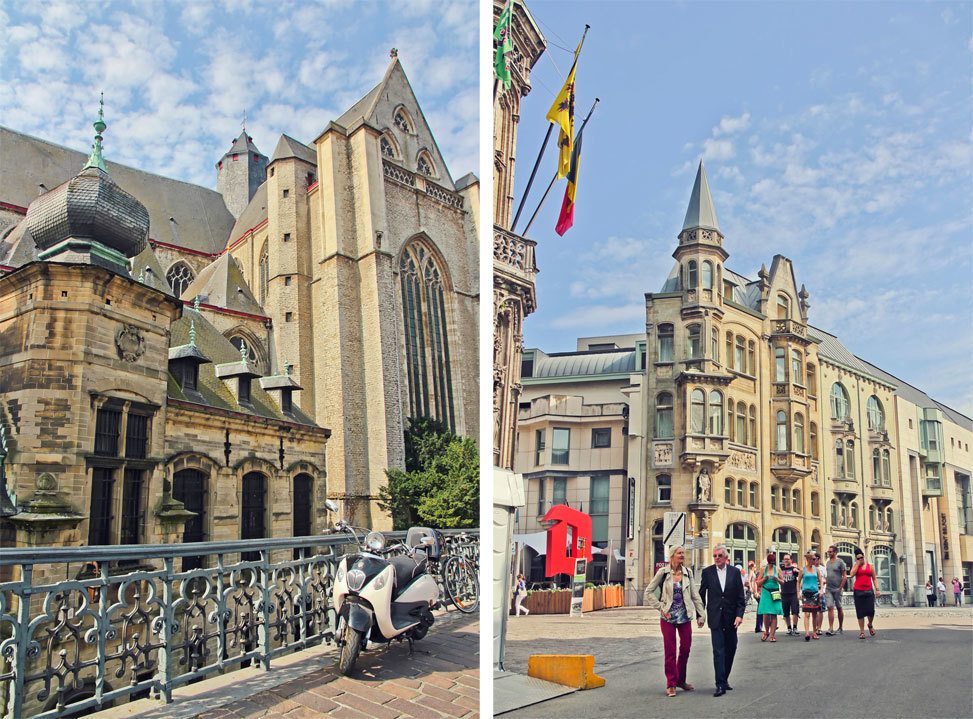 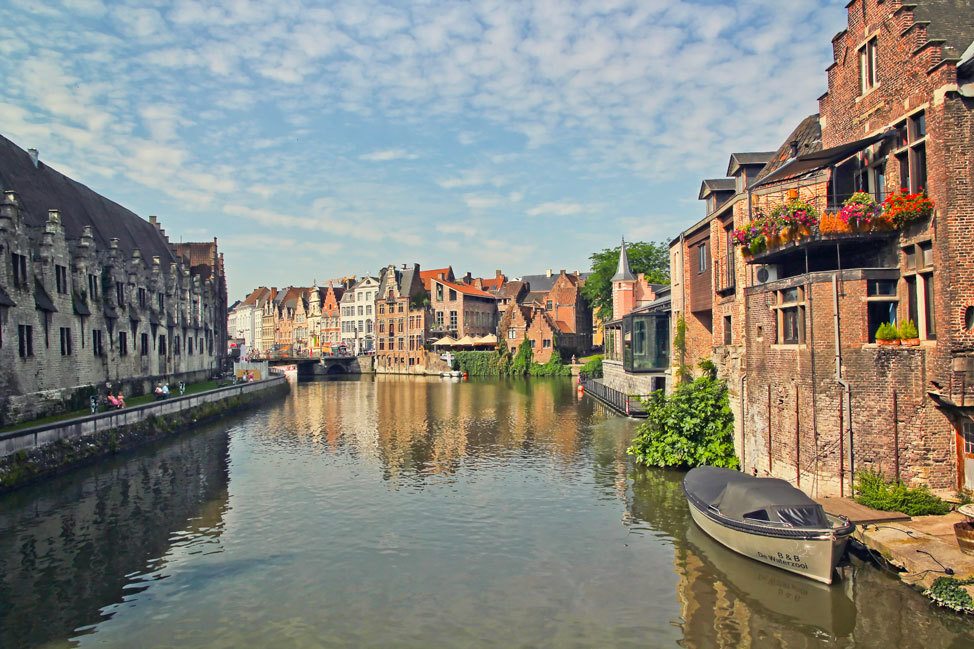 Ghent was simply gorgeous, and I was shocked how quickly the time went by there. I longed to spend longer; however I reminded myself that I hadn’t wanted to choose between Ghent and Bruges and thus would have to make some sacrifices in order to see a small bit of each.

Upon arrival in Bruges, lunch was our first stop. Meals were not included, so together with my seatmate from the bus we decided to ditch the group restaurant and look for something a little more inspiring. As soon as we turned the corner and found Salad Folle, I knew we’d made the right choice. I was happy to have found another chick around my age traveling alone on the tour, and we bonded over our European travels, the upcoming Tomorrowland madness (she was going too!) and the best salads we’d had in Belgium. 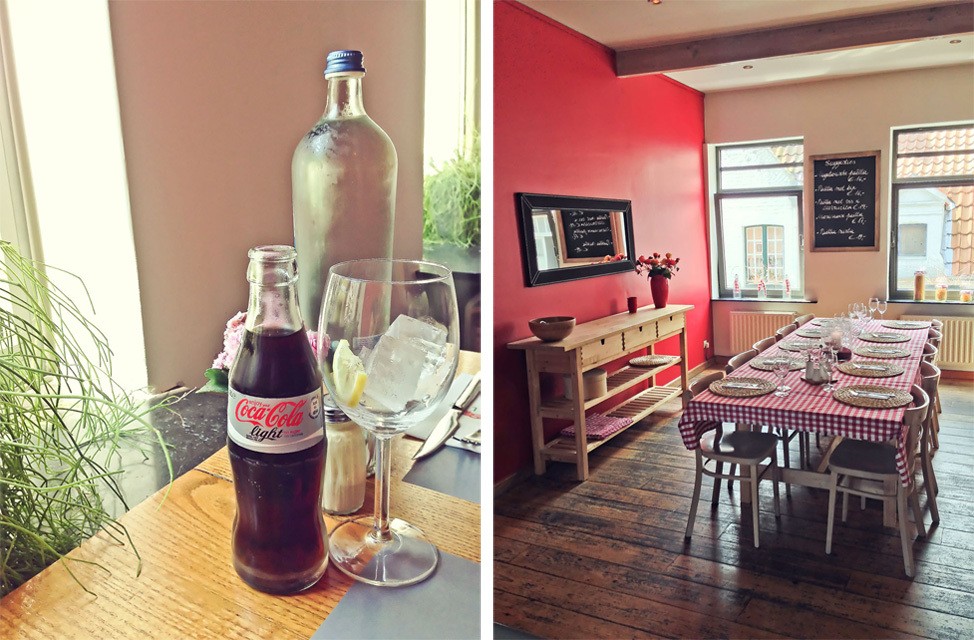 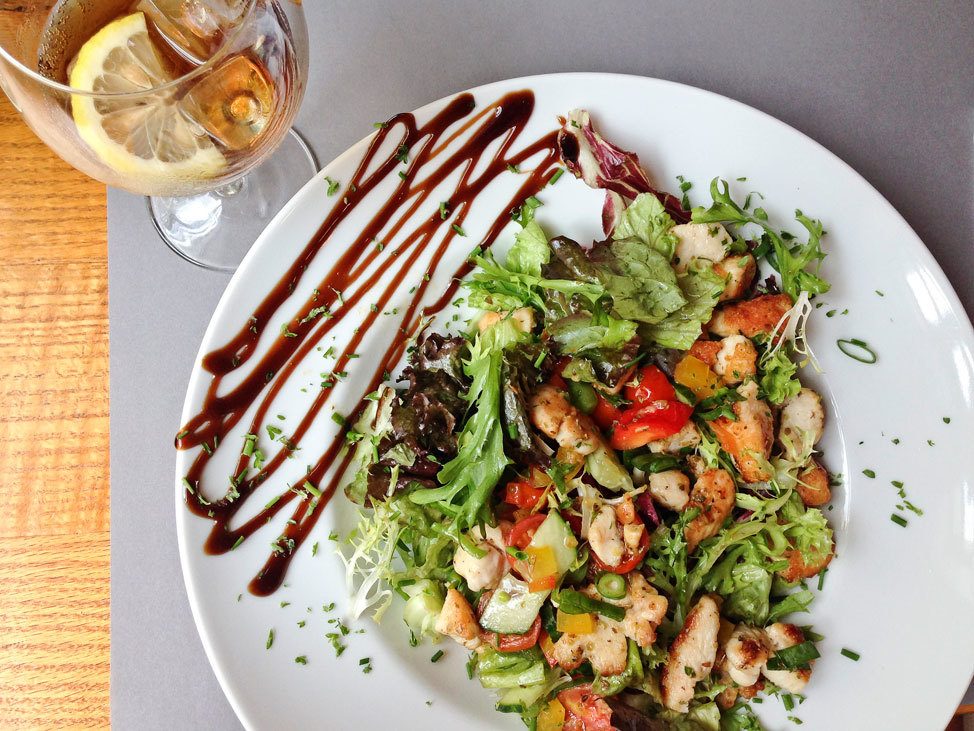 Fully sated, we met back up with the group just in time for the Bruges canal tour. While technically an optional excursion, for just 7.60€, I don’t know why anyone would skip it — and I don’t think anyone in our group of fifty did. While waiting for our turn to fill one of the adorable little boats, I let out a significant snort at the German translation of “boat trip.” What’s that you say? You didn’t realize that I’m actually a fifteen year old boy? I’M NOT MADE OF STONE, YOU GUYS. 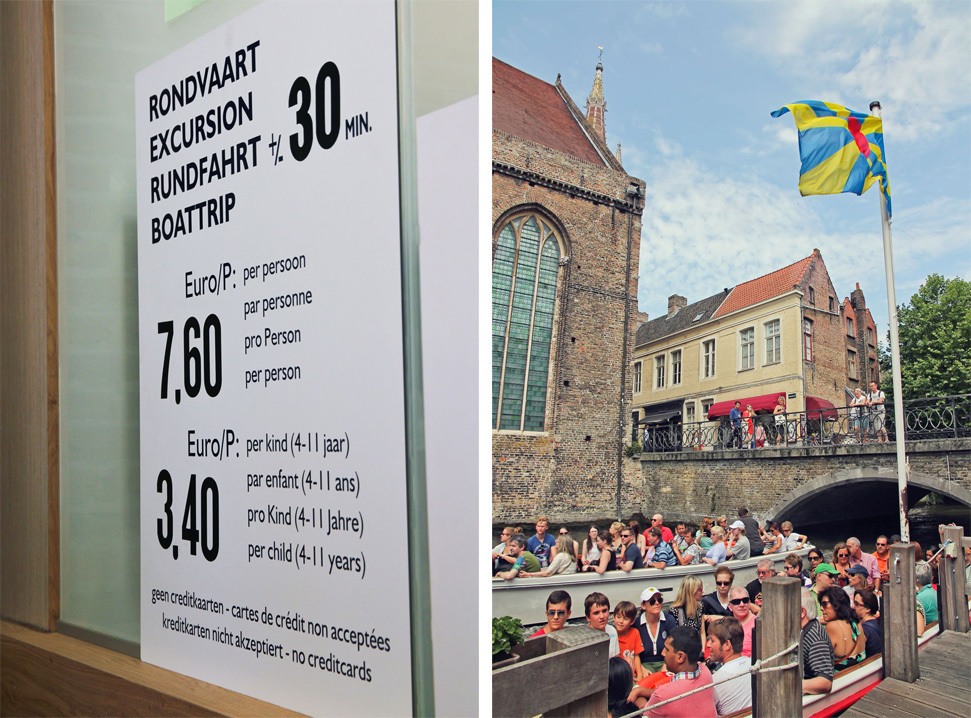 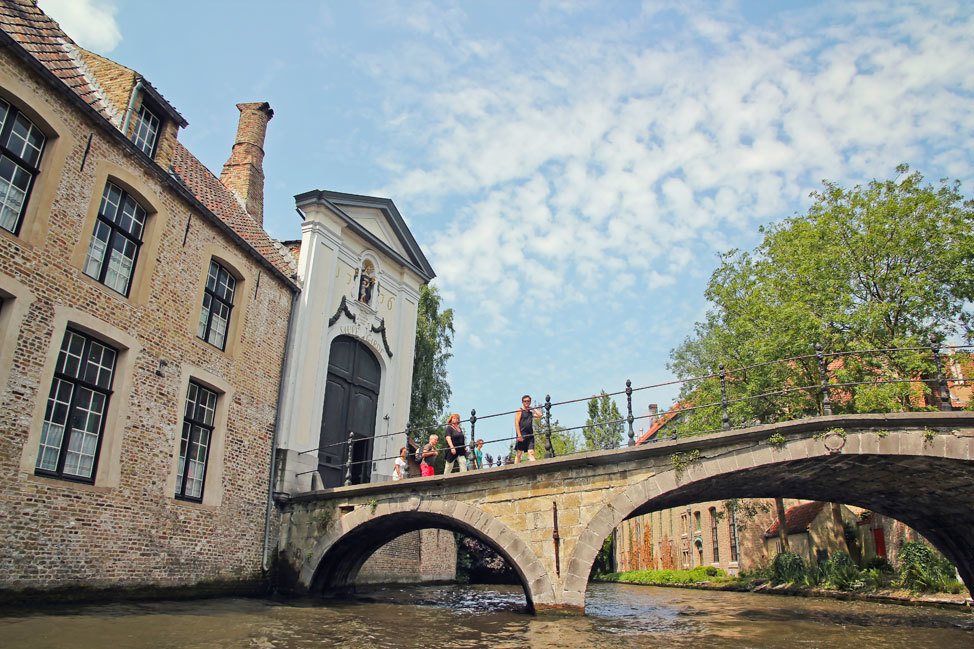 I had assumed that the canal tour would be touristy in the extreme, and I mean technically I guess it was, but that didn’t hinder my enjoyment even a single degree. The sights were beautiful, the weather was perfection, the driver was engaging and the whole thing was just all around fabulous. 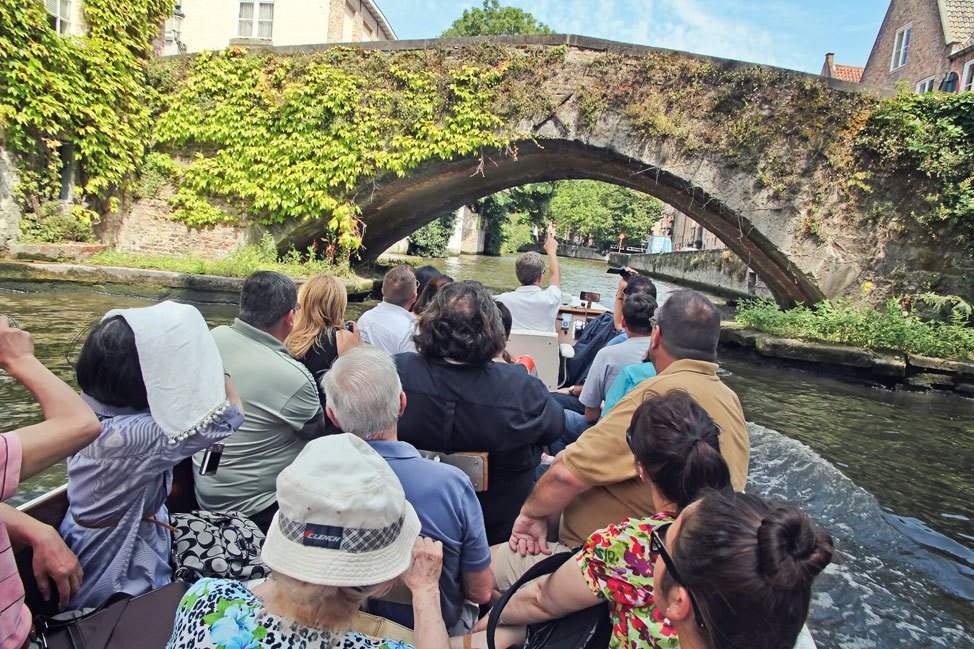 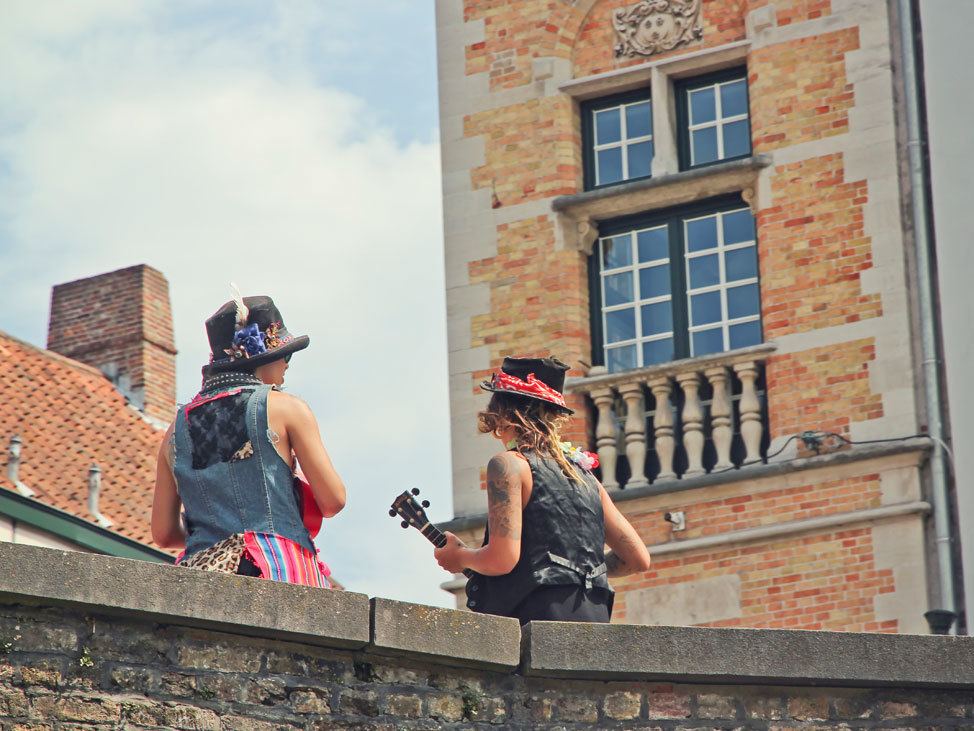 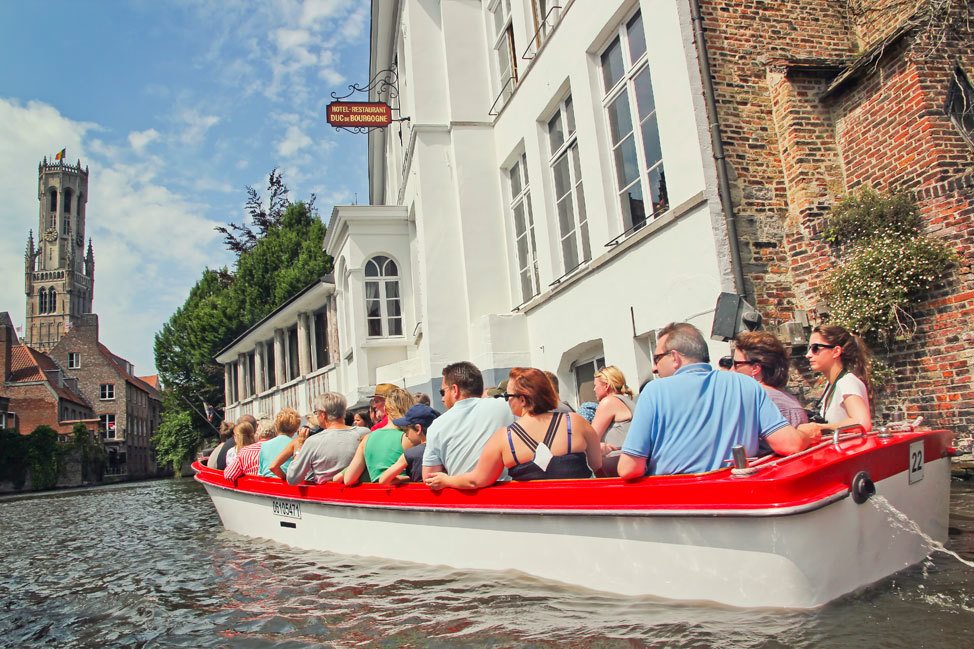 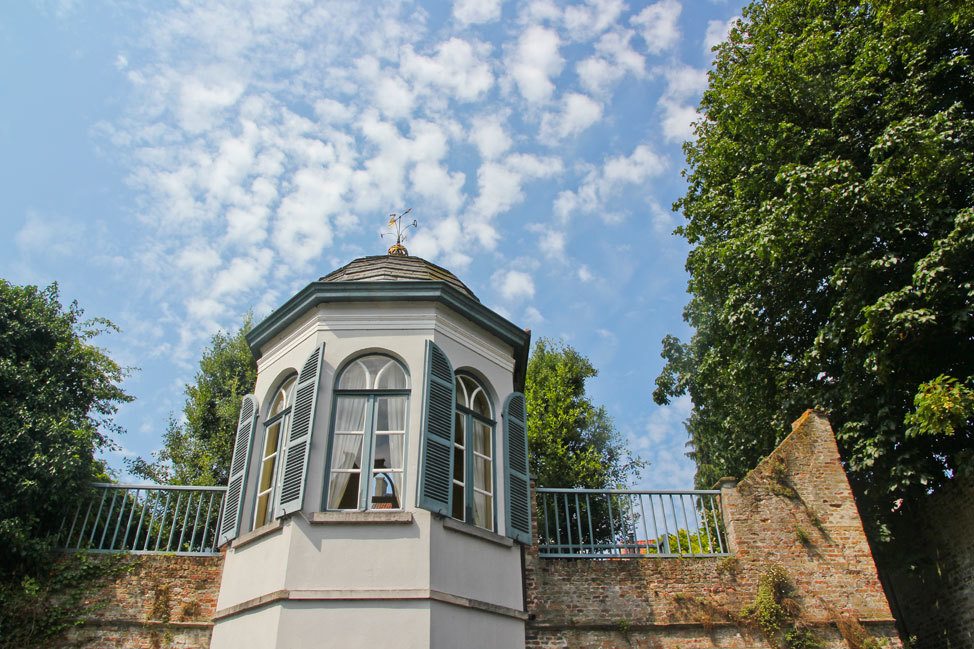 In fact, this whole summer jaunt was my first ever trip to Europe that wasn’t with either my family or the family or friends of my Scottish ex-boyfriend. I was starting to get what all the fuss was about. Breaking news: Europe is kind of pretty. I just couldn’t stop wondering what movie set I’d wandered onto. 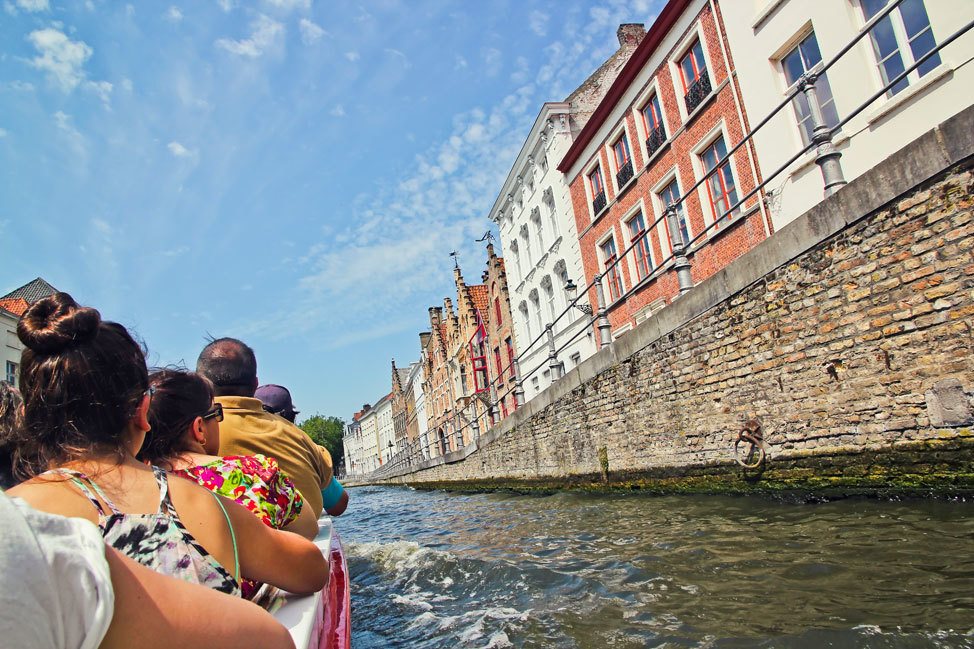 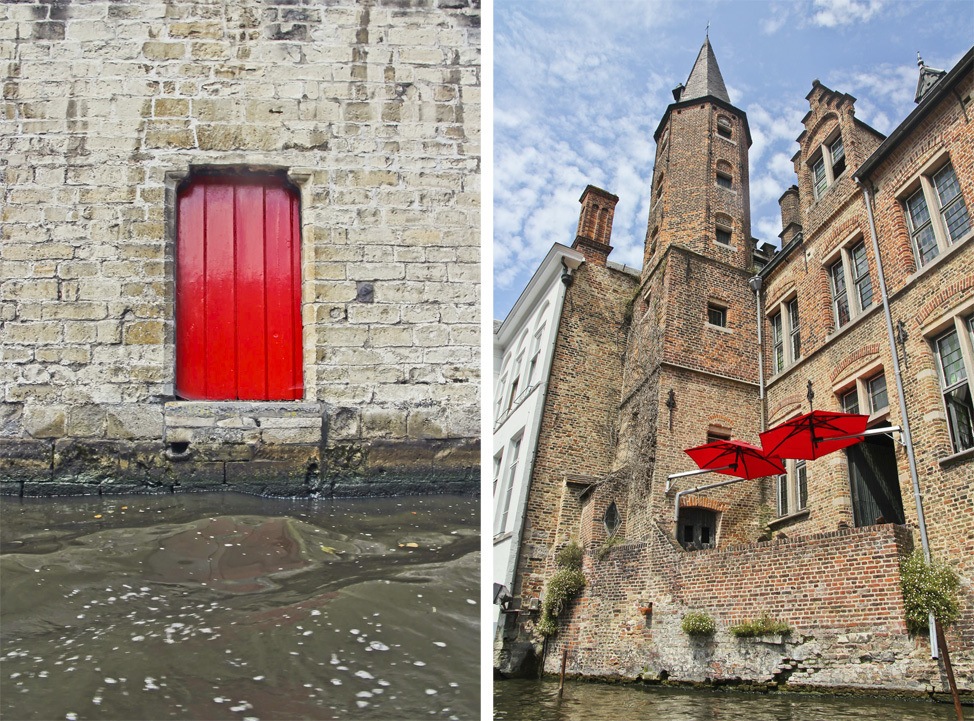 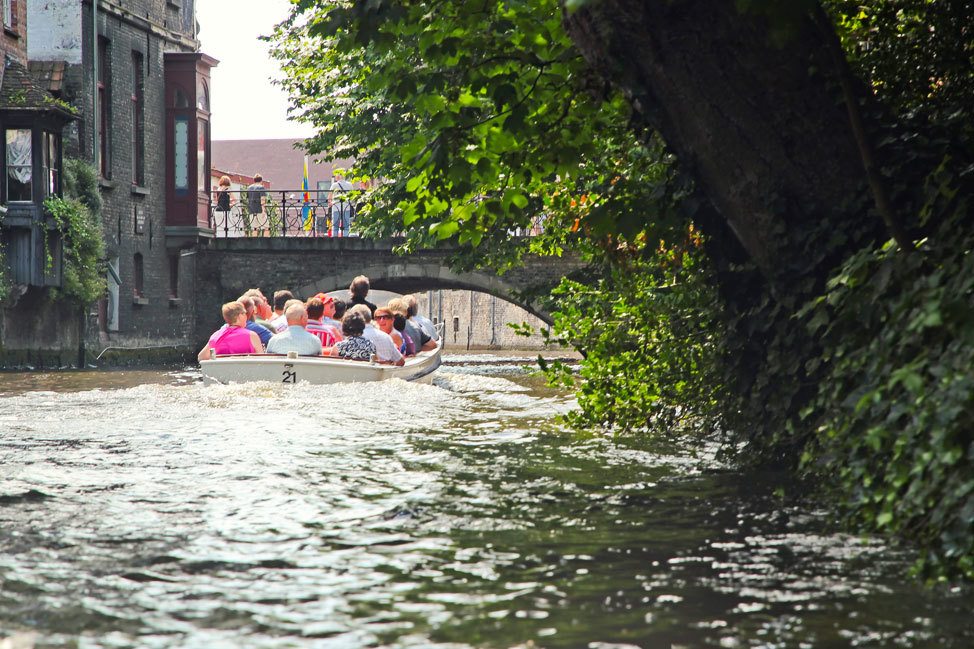 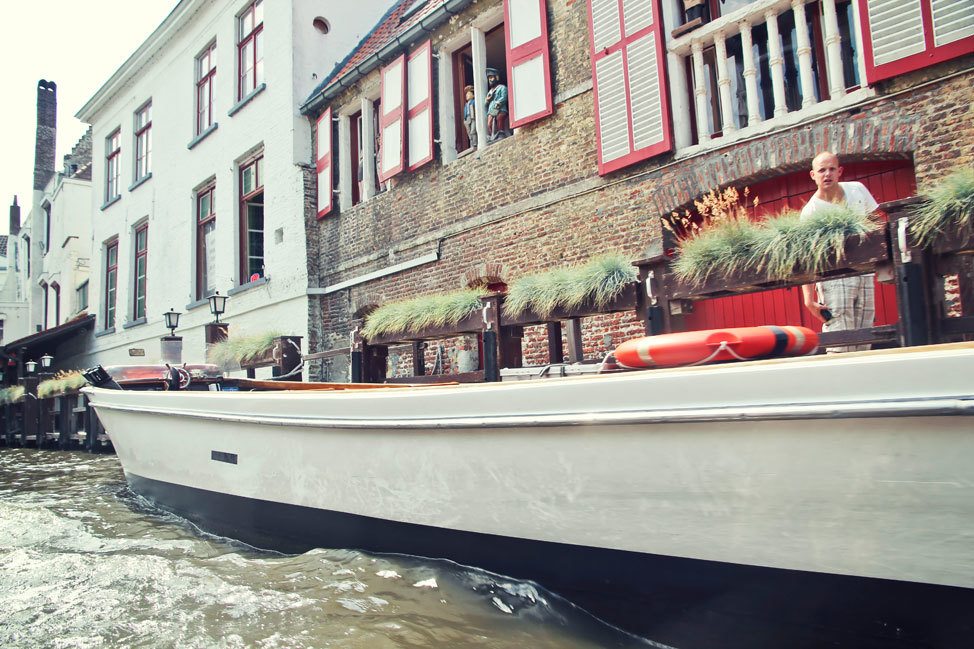 After our boat trip came to an end, it was time to explore by foot. Again I took off with no map and no real destination, just enjoying getting lost. I’m not sure if it was the time of day or if Bruges is just more popular, but there were significantly more tourists mulling about than there had been in Ghent.

Still, in a place as special as Bruges, you kind of understand the crowds. I was more than happy to share. 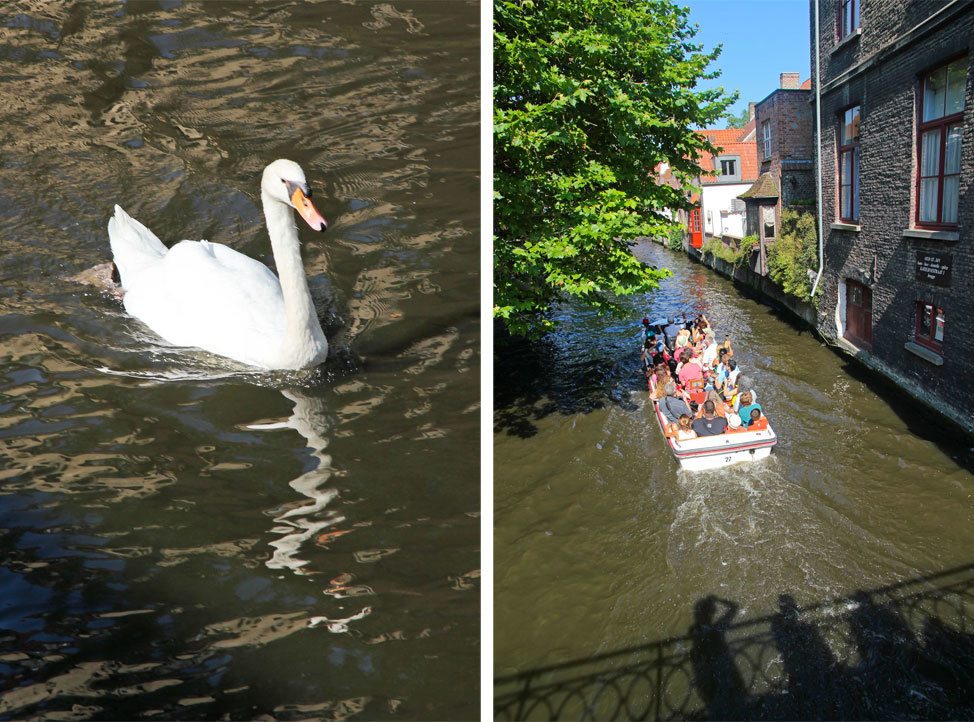 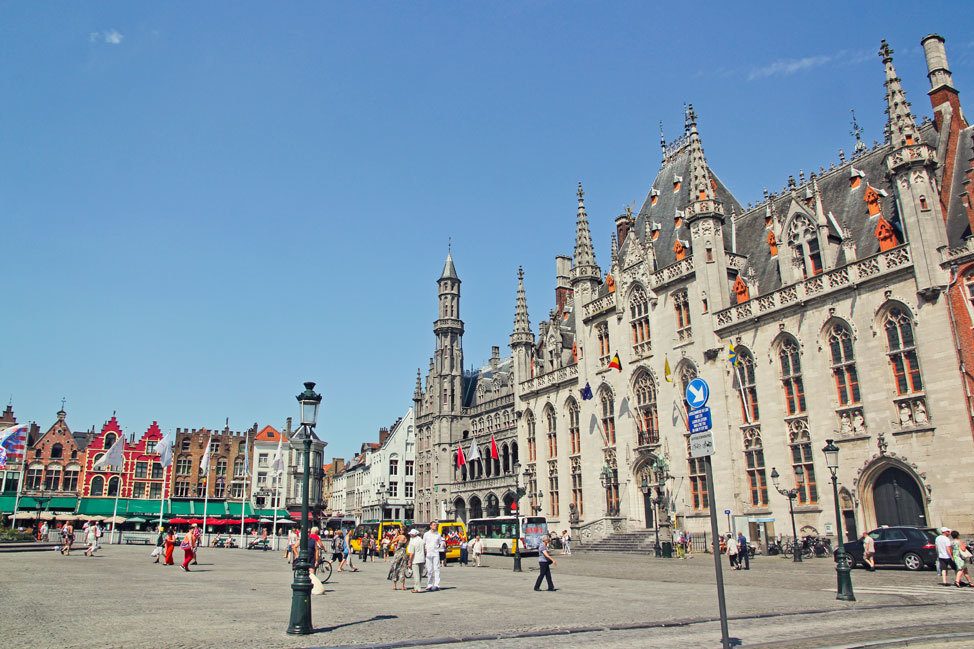 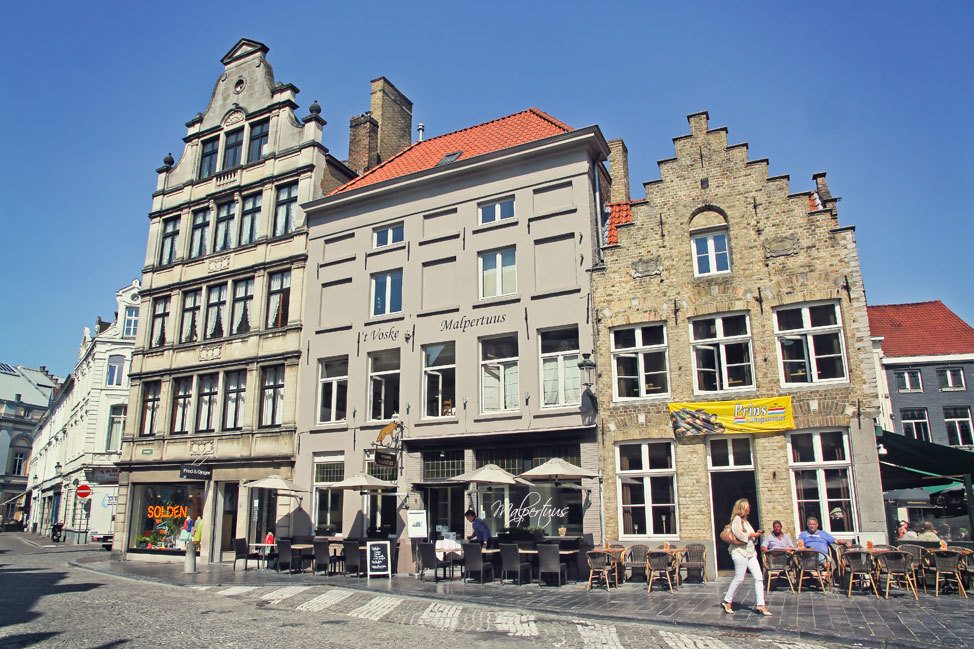 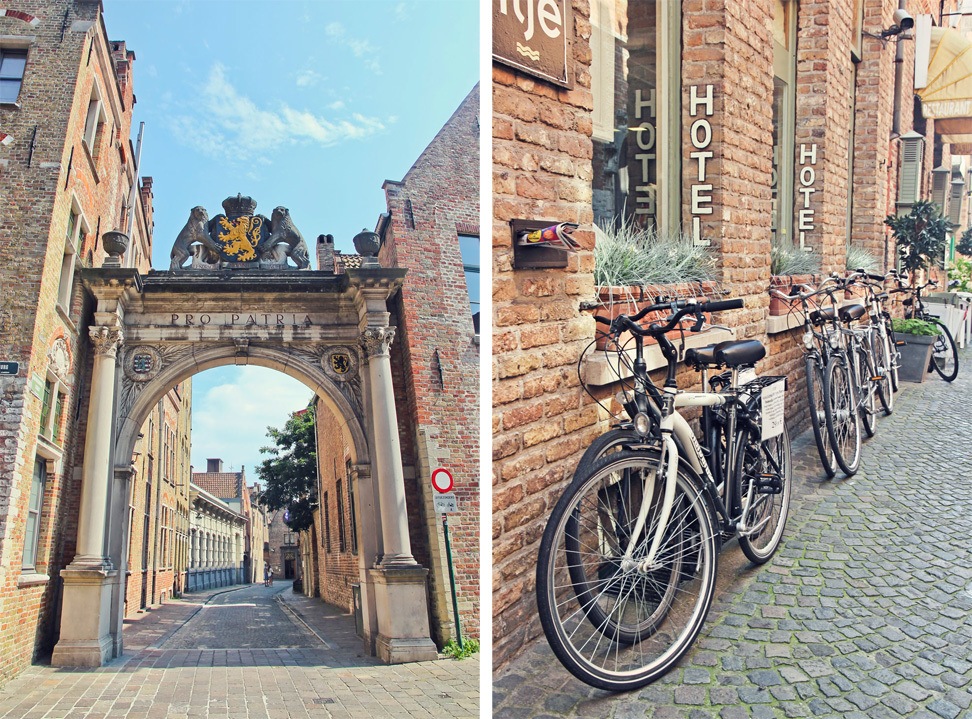 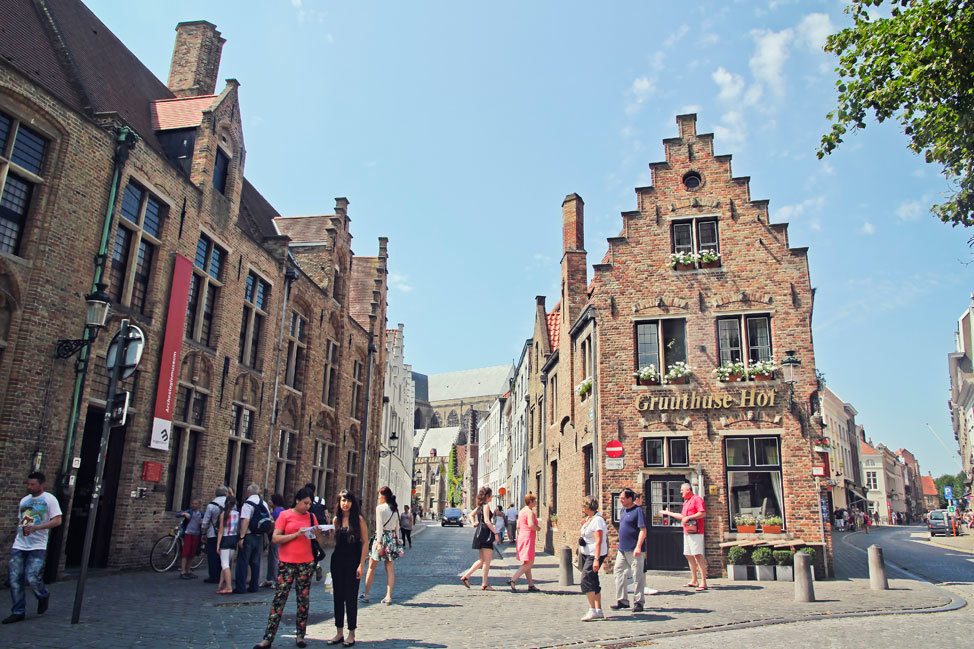 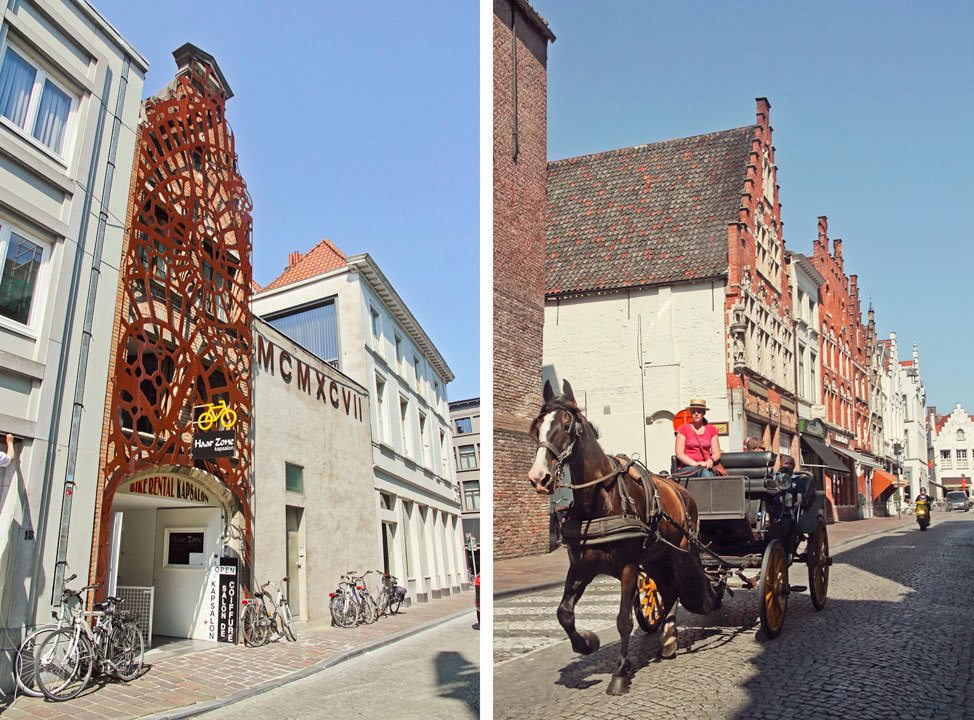 Ghent and Bruges charmed me to the core, and I couldn’t be happier that I was able to get an overview of both despite the brief amount of time I had left to play with. For those looking to do the same, this tour is a good value (considering a small cup of frozen yogurt in Bruges set me back the equivalent of $13 bucks, $60 for a ten hour day tour is pretty good deal) and will get you to and from Brussels comfortable and efficiently.

However, I did accept on this trip that this kind of tour just isn’t for me. Due to my time constraints I didn’t have many options, but in the future I will attempt to avoid big bus tour groups of this size. It probably didn’t help that days before I had taken one of the best tours of my life, but I found this guide monotone and mechanical, and didn’t appreciate being herded into a tourist trap restaurant when there were hidden gems around the corner, or being led to a generic, shopping-mall style chocolate shop when Belgium is literally bursting at the seams with local, high quality chocolatiers.

But that’s the beauty of travel — learning what you love and what you loathe and everything in between, and being pleasantly surprised to learn that sometimes you had it wrong all along. As the bus pulled back towards Brussels and I flipped through my photos from the day, I suddenly found myself daydreaming about cities I’d never given much thought to before — Amsterdam, Prague, Zurich… the list suddenly seemed endless. Europe, you finally got me. Or rather, I think I finally got you. 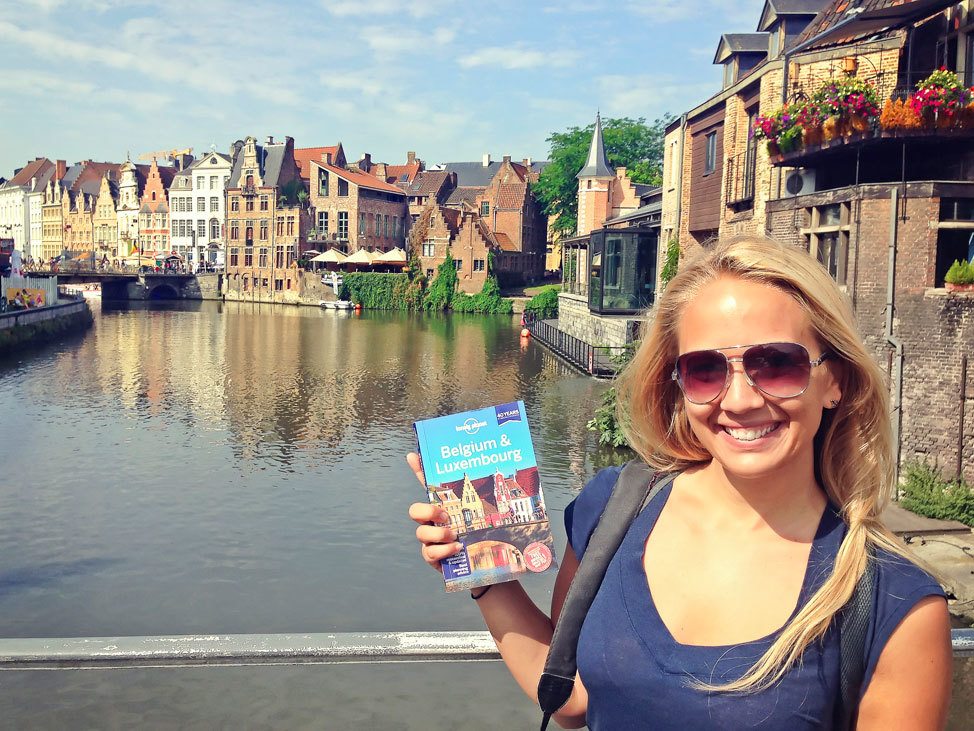 Are you a Europhile? If so, what city tipped the scales for you?

Once Upon a Time at Tomorrowland

How Much Does Tomorrowland Cost?

Where To Stay in Thailand: Yonderbound and Beyond! Photo of the Week 172: Koh Tao
81 Comments...