On the morning of my third day in the Cordilleras, I jolted awake and rolled over to look out the window. Had I dreamed how beautiful it was? The view that answered me back assured me it was very much reality. Despite, or perhaps even partly because of, the total isolation from the outside world, I was sad to be leaving that day. But I had solid plans to meet my friend Heather in Sagada the next afternoon and with no internet and incredibly spotty phone service, I wouldn’t have been able to contact her even if I wanted to. So I had to make the most of the little time I had left. 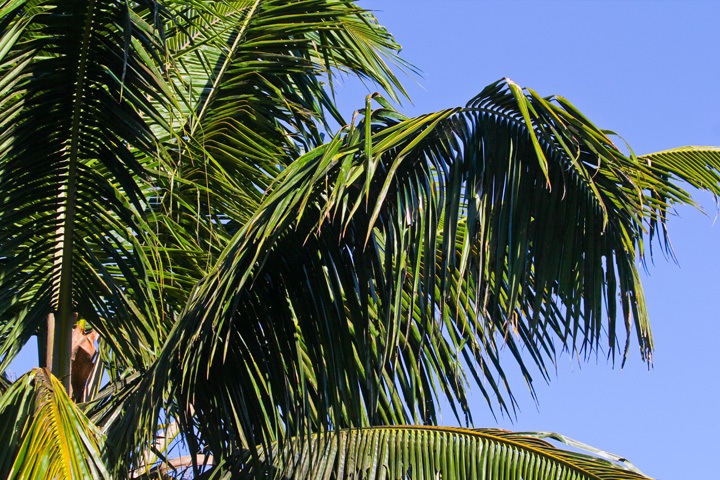 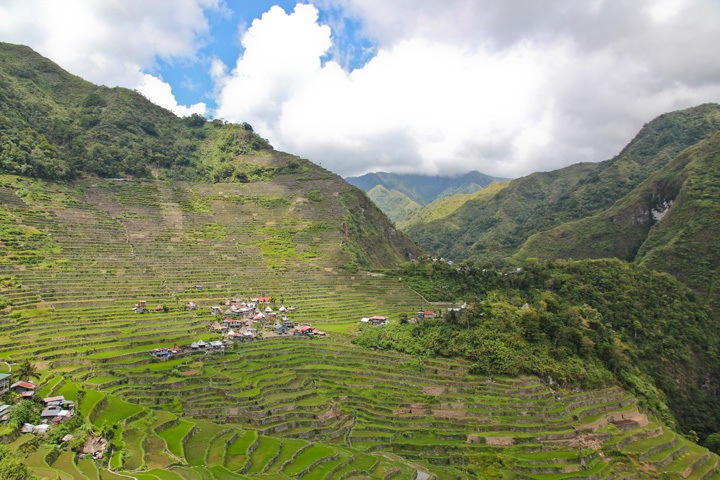 After breakfast (130 php/3.20 usd), the guide that G.I. Joe and I hired the day before, Frankie, came by to see if we were still interested in going to “Best Viewpoint.” Tourism is in its most rudimentary form here and there are no maps or brochures to go along with these offers — just a name and a price and whatever supplementary information you can pry out using interrogation methods gleaned from a decade of watching Law and Order reruns. From our conversation, I understood that it would take about an hour to stroll up to this spectacular viewpoint — what a nice morning stroll! We determined that from there we would cross over the mountain ridge toward Bagaan, where the path meets up with a road and we could catch a Jeepney back to Banaue. It meant we had to carry all of our stuff with us, but it was the most direct route back to where we needed to be.

We set off at 8:30am in order to try to beat the heat. I requested that before we set off we take a small detour back into the village, as it had been raining the day before when we reached it. Frankie didn’t look thrilled but trotted down ahead of us anyway. I was beside myself with happiness. The sky was blue, the clouds were fluffy, the rice fields were a lush green and I was getting to see and photograph it all. There were tiny provincial churches… 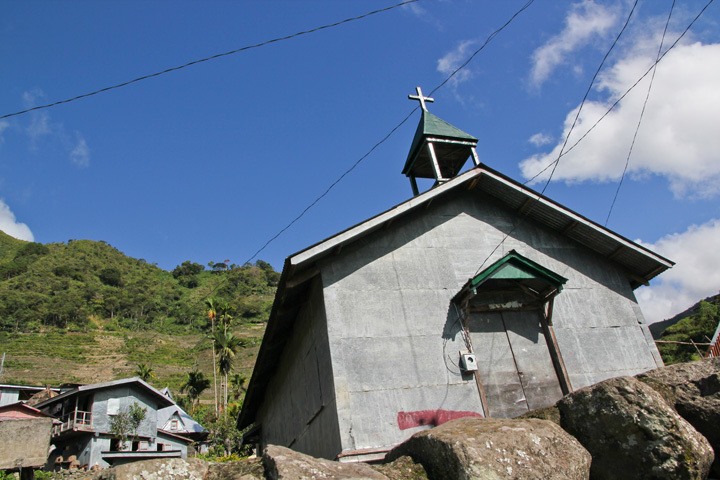 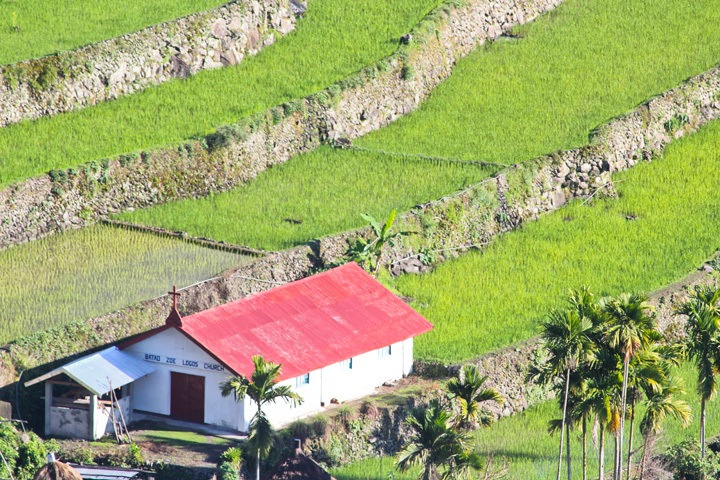 Native houses and structures that I marveled were built so far from any kind of road…. 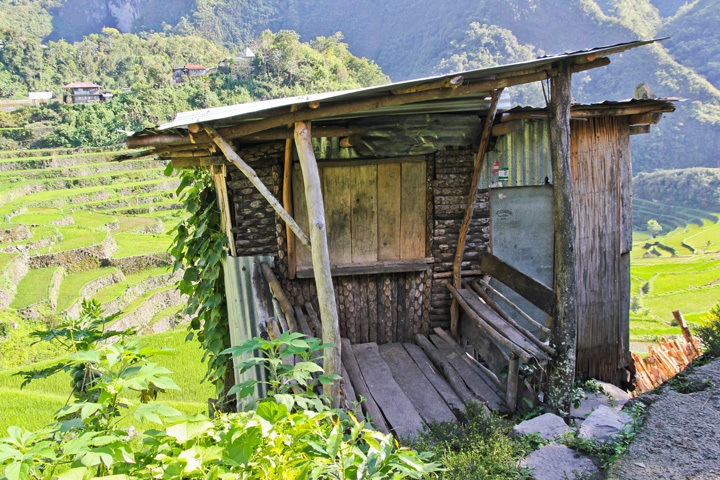 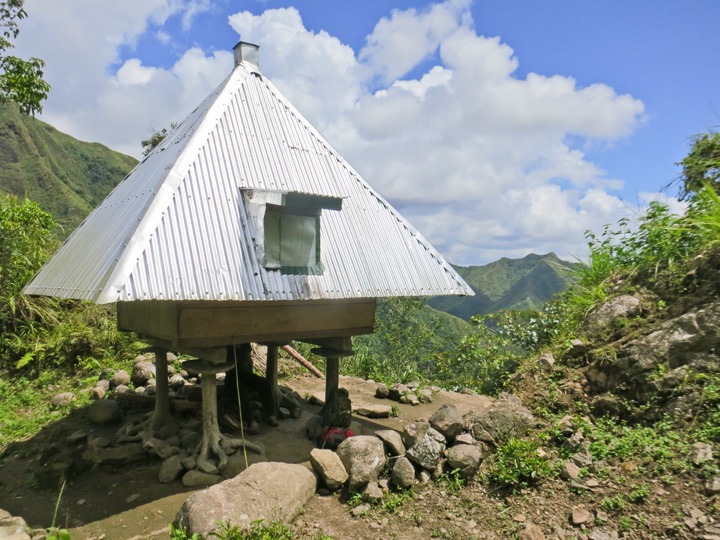 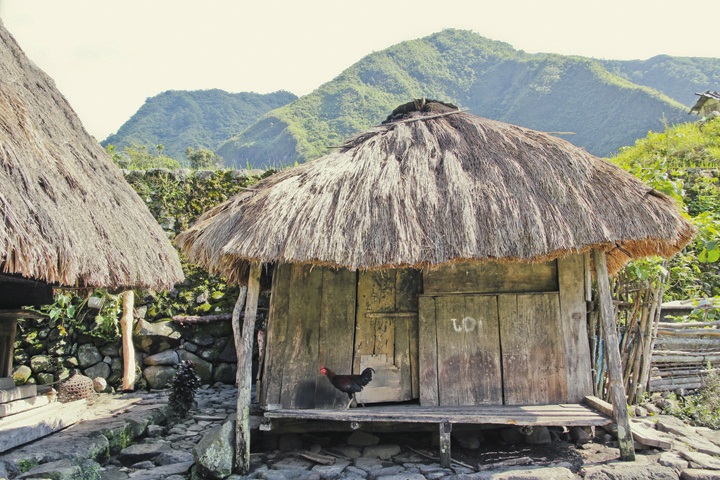 And a small menagerie of dogs and roosters patrolling the village… 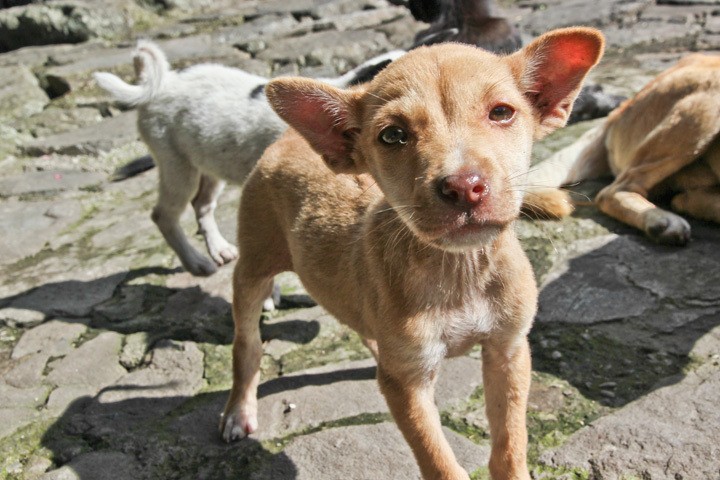 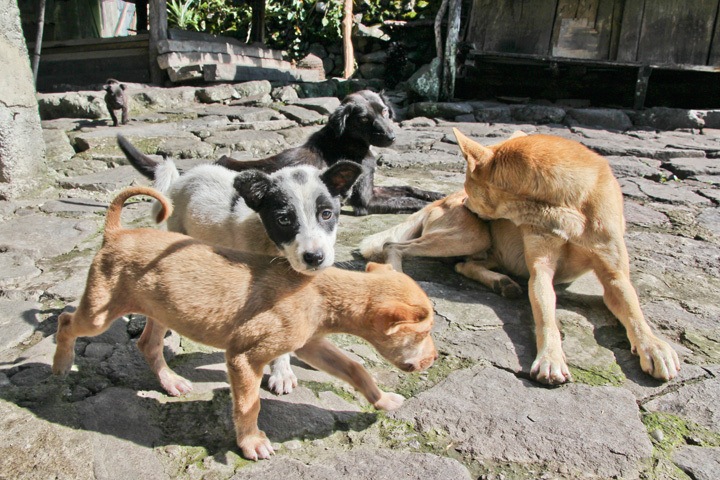 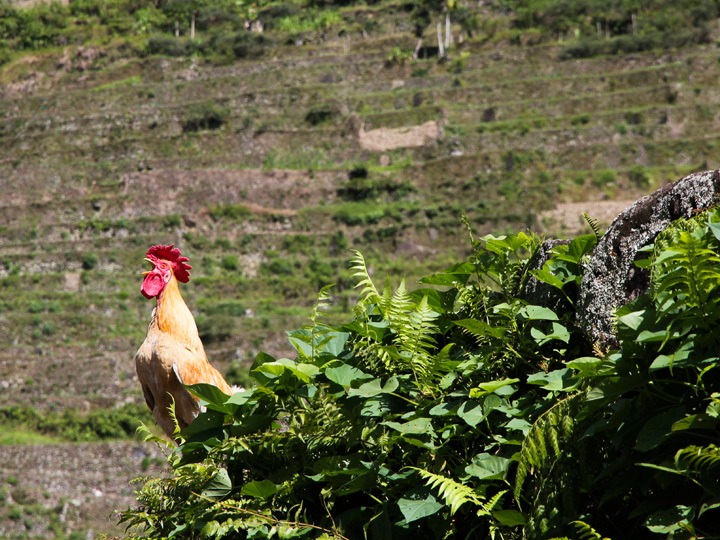 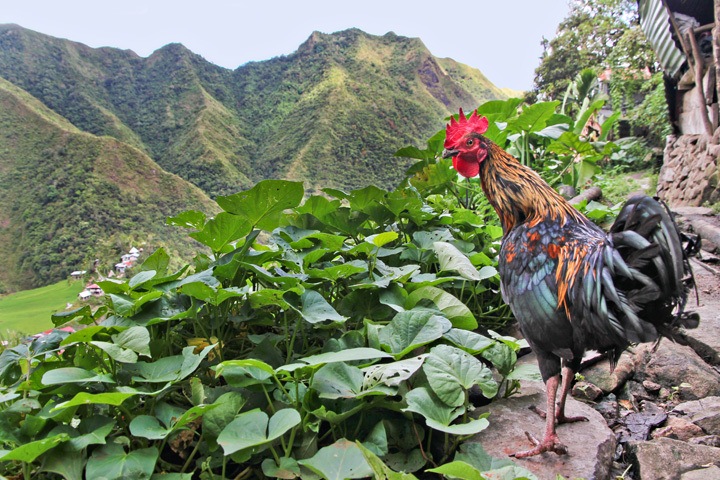 When the boys finally insisted camera time was over, I said a silent goodbye the beautiful rice terraces that had made me feel inspired in a way I hadn’t experienced in a long time. 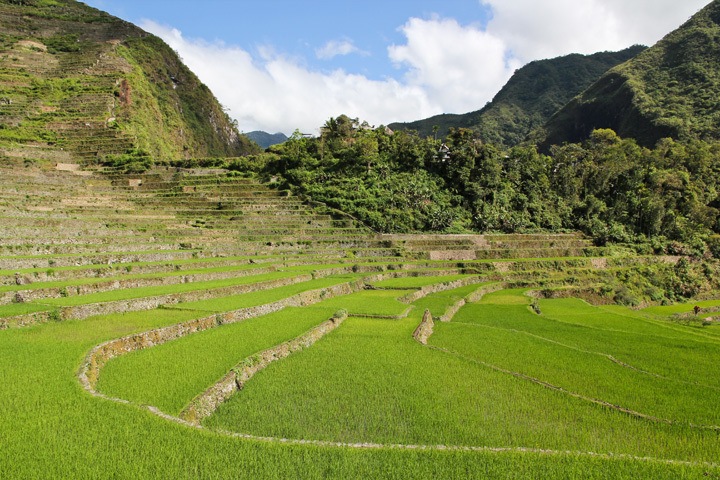 And then the true hiking began. Well. I guess it’s a good thing Frankie didn’t give us a more accurate description of what we’d be doing — climbing the freaking Filipino Ben Nevis, a 1,300km MOUNTAIN! — because I would not have signed on. I don’t know what happened to that easy hour stroll to a nice viewpoint, but I spent the next two and a half hours on a hard vertical ascent. I was actually crying toward the end, though luckily no one was the wiser because I was sweating so profusely that a few tears just blended right in. I normally consider myself a fairly tough chick but in this situation I think I was more frustrated than anything — I was totally mentally unprepared for such a strenuous climb, and on top of it my back was breaking from the weight of my overnight bag.

So yeah, some tears happened. 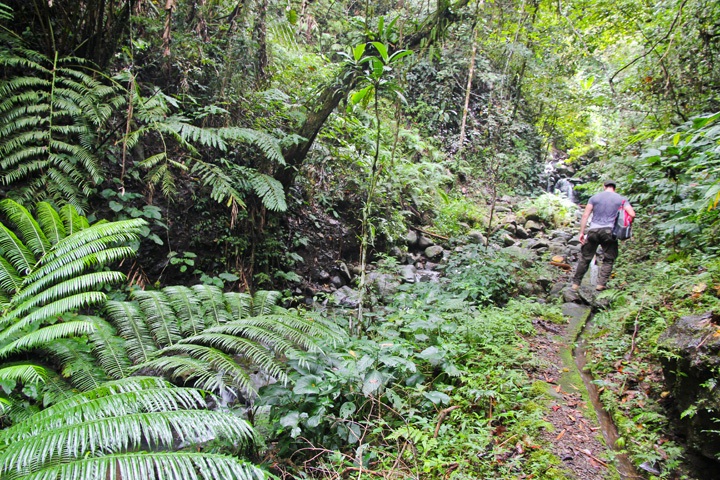 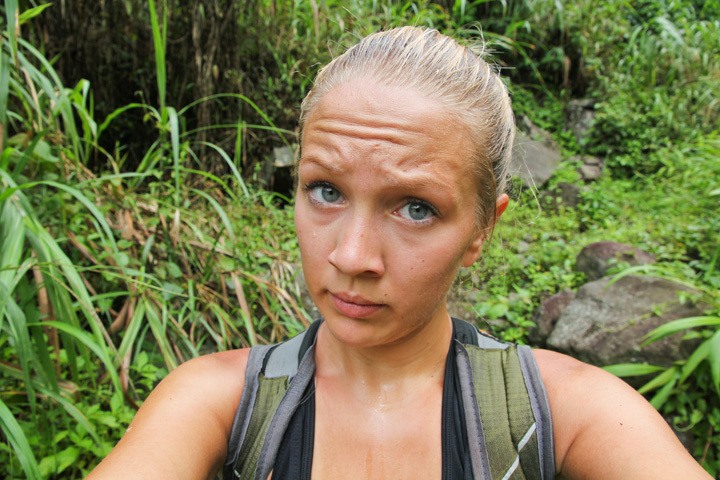 At the top of the mountain I learned a tough lesson — in the Philippines, one should simply just accept that they will never have even the tiniest inkling about what is going on, ever, and one should just learn to go with the flow and deal with it. Despite the extensive conversation the night before, from the top of this mountain that I hadn’t realized I was climbing, I also realized we were not taking the route I thought we were taking — rather than passing over the ridge we were going back down the way we came, which meant we had unnecessarily carried all our gear up a mountain, and had tacked a few hours onto our day.

I put in my iPod for ten minutes and just let myself fume before shaking it off and remembering that while the guides have excellent English they are still bamboozled by our Western desire for frivolous information regarding time, distance and route when signing on for a day of hiking. And okay, the view — peeking down into the bowl of terraces from high in the mountains above —  had been pretty damn amazing after all. 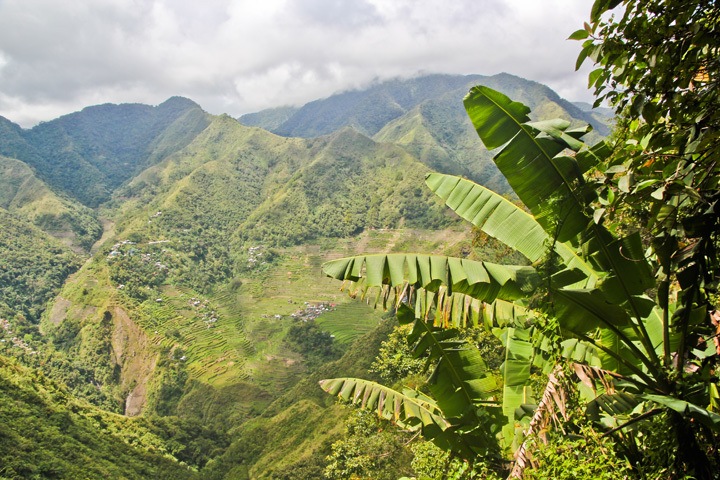 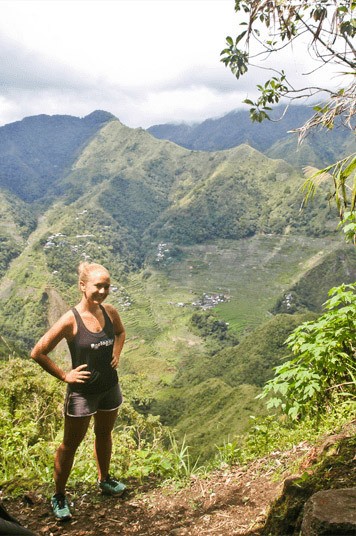 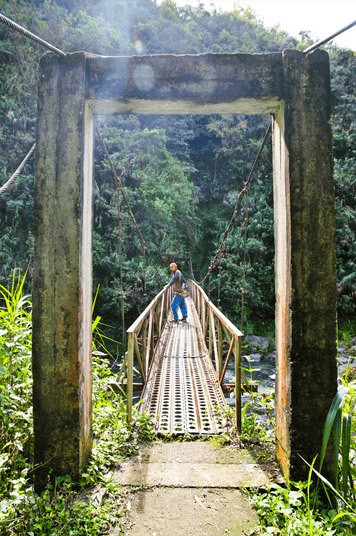 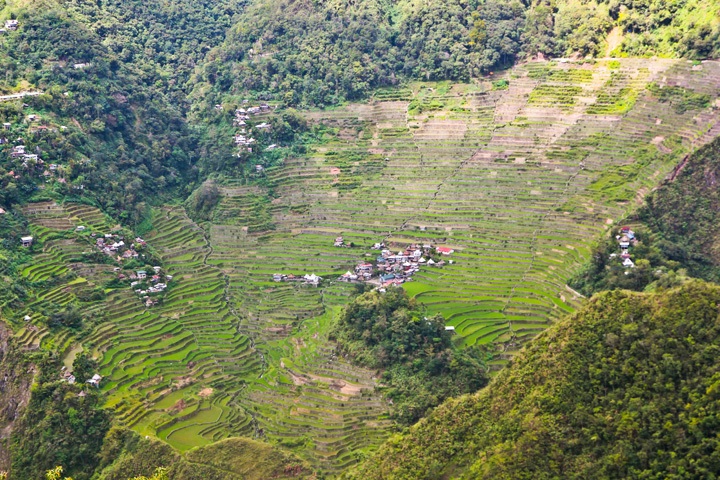 The new plan — as far as I understood it, and I had learned to put very little stock in that — was to head more or less back to where we started in the village. From there, Frankie would leave us (we didn’t have him take up all the way due to budget reasons), draw us a map, and we would follow the mostly level route to a random spot in the road, where Frankie would arrange for a trike driver to pick us up and bring us the rest of the way to Banaue. Brilliant!

Now comes the part of the post where I almost died.

One moment I was stepping down the terrace stairs — basically stones jutting out the side of the wall in a diagonal line — and the next I was suspended at an 80 degree angle above a 100 foot ravine, being held up by a few strong stalks of bamboo. Somehow I kept totally calm as the bamboo started to creak, and yelled out to the Frankie and Joe for help (I was bringing up the rear of this particular hiking party). I could tell the branch I was holding with my left hand was keeping me the most stable, so I made the terrifying decision to swing my right hand up and allow the two guys to completely pull me back up to safety while trying to find footing on the rocks. Amazingly, I didn’t have a scratch or even lose the waterbottle out of the pocket of my backpack — it did take me a good 20 minutes to get my heartrate back to normal though. Hiking on the rice terraces is sometimes terrifying — you’re basically stepping along a 6″ wide wall of mud and if you fall in one direction you’re going to drown in shallow rice muck and if you fall in the other you’re going to plummet to your death. There were moments where the wall was so steep and deep that I more or less crawled on all fours. I tried to ask Frankie about the frequency of injuries for tourists hiking here but he brushed me off. After my experience I was even more curious, but also weighing the fact that I frequently trip over my own feet, so coordination isn’t exactly my forte. 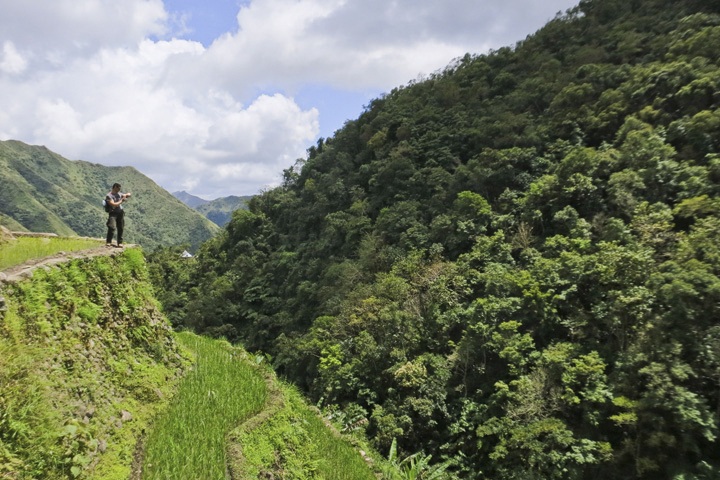 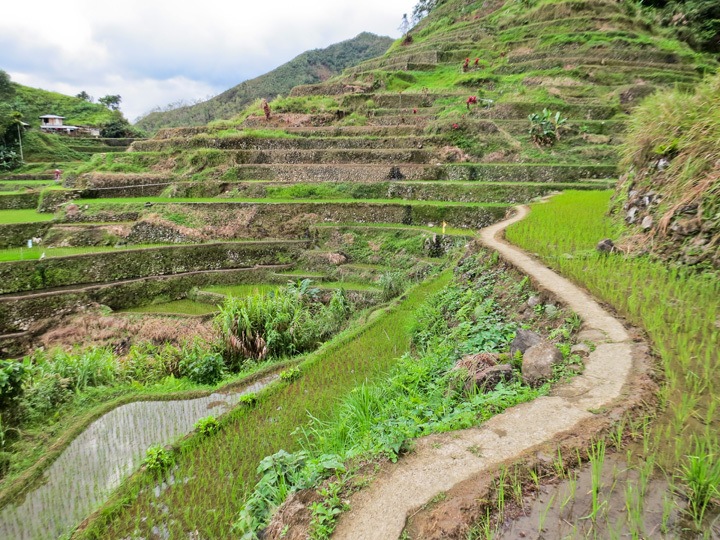 Eventually it was time for Frankie to leave us, and so while I Steri-pened some drinking water from a stream he drew us a rudimentary map. I casually asked how far we were — at the top of the mountain he told us we were two hours from the road so it should have been about 45 minutes. “One hour. Two hour maybe” he said. UM OKAY I’LL JUST LET THAT ONE GO SINCE I’M BEING SO ZEN AND LAID BACK NOW. It was in fact about two hours, and involved lots of asking each other “do you think we are really going the right way?” and one major fork that was not included whatsoever on our map — I’ll just go ahead and say that I don’t think my guide has a future in cartography. Still, he did end up carrying my bag down from the mountain and so in addition to my share of his guide fee (400 php/9.84 usd), I did throw him a tip (100 php/2.46 usd).

On the plus side, the scenery was jaw-dropping — endless green mountain ranges punctuated by remote villages and flashes of terracing. Finally we reached the road, where a trike was meant to be waiting for us. Shockingly it did not materialize and so after a deep breath and a self-administered dose of Toughen Up, we started the walk to the next village. Then something magical happened. Within a mile a truck stopped and let us hop on the back for a free ride back to Banaue — an amazing bonus in light of my budget crunch. Bouncing along in the bed of the truck I turned on my iPhone to look at the time. We had been in non stop motion since 8:30am — and it was then 4:00pm. 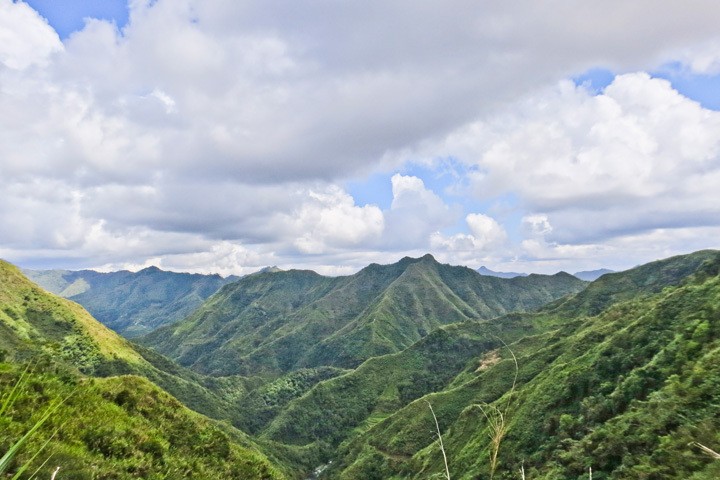 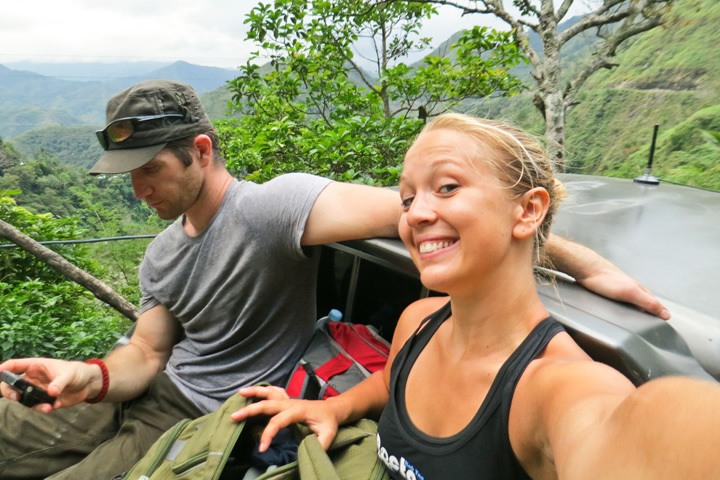 What an adventure it was! On the negative side, my calves felt like someone had been ripping them open with pliers and I was quite certain I wouldn’t be able to walk the next day. Another downside, G.I. Joe and I had spent the last two hours of hiking butting heads — but I tried to remind myself that he had after all saved my life. As a final indignity, it started raining for the last ten minutes of the drive and then I was forced to shower with cold water upon my return to Banaue.

On the plus side, Batad might just be the most beautiful place I’ve ever been. I left feeling inspired, awed, and a smidge proud of myself for taking it all on. It was on of the highlights of all my adventures in Southeast Asia. And one of the cheapest! After dinner (150 php/3.69 usd), hot chocolate (35 php/0.86 usd) and accommodation for the night (300 php/7.38 usd), my grand total for day three in the Cordilleras was 1115 pesos, or $27.43 dollars. In three days I had spent 3,408 pesos, or just $83.83 dollars — I had more than enough out of my original $100 to get me to Sagada, considering public transport via Jeepney worked out to just $5.

There’s no doubt, it was worth every penny — at twice the price. 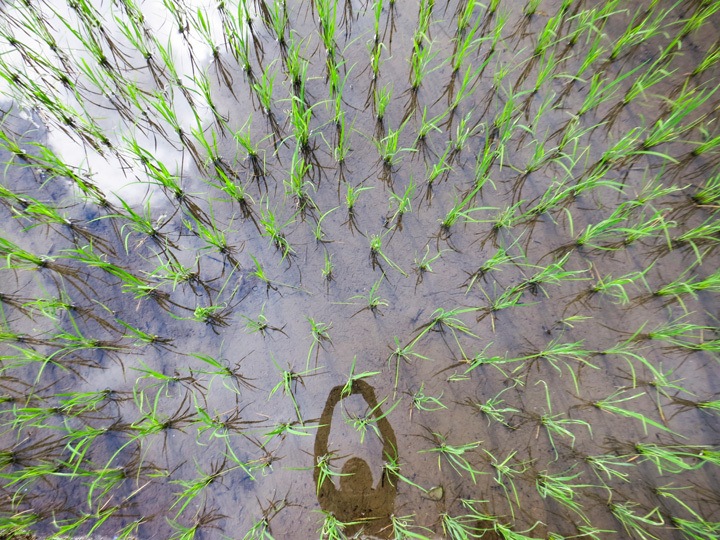 I’d love to hear about some of your own hiking horror stories in the comments.

Circumnavigating Eden: A Walk Around Malapascua

Now This is Travel: Hiking The Rice Terraces of Batad This is the Philippines? A Mountain Retreat in Sagada
27 Comments...