As you may have noted from my Inca Trail facts and figures post, this is not an cheap or easy-to-book route to take to Machu Picchu. Prices are sky-high (or should I say Dead-Woman’s-Pass-altitude-high?), and reservations must be made months in advance. Luckily, there are alternative treks that require much less money and advance planning. 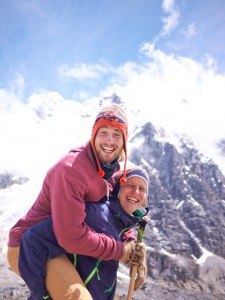 When Anders and Co., hereby referred to as The Scandis for their shared Scandinavian heritage, arrived in Peru their first mission was to get to Machu Picchu via the most boast-worthy route possible. They chose the Salkantay Trek, a spectacular five day hike with a peak altitude of over 15,000 feet. (Note: Because some of the group was pressed for time, they chose to do the four day version instead, which compressed the third and fourth days of the traditional itinerary.)

As opposed to the $600 I spent to hike the Inca Trail with Llama Path, The Scadis payed $210 for the Salktantay trek. There are also optional add-ons for hot springs and ziplines, though the boys skipped those because they did the compressed four day itinerary. (Strangely, it was the same price for the five day.) That price did not include the bus between Aguas Calientes and Machu Picchu, which cuts out an hour each way of hiking but costs $18 round trip. It is important to note there was definitely a difference in the luxury levels between Llama Path and the no-name agency The Scandis booked with, but the boys were very happy what they got for their money.

Another difference: booking time. The Scandis arrived in Cusco on a Wednesday, booked the trip that afternoon, and took off on Friday morning. They trekked in mid-November, when many agencies are shutting down their Salkantay treks for the duration of the rainy season (the route is much muddier than the Inca Trail, and therefore less pleasant to hike towards the end of the calendar year), but lucked out with perfect weather.

But blah blah blah, show you the pictures, right? Basically I wrote this entire post because I wanted to share Anders’ fantastic video with you guys. I mean, yeah, I wanted you to know that you can get to Machu Picchu on your own steam without spending a fortune and planning half a year ahead…. but really, just watch the video, okay?

Hope you’re all having a magical holiday season, whatever it is you’re celebrating.

Luxury by Tent in Northern Peru

Falling for Lima… The Second Time Around

Photo of the Week 132 One Kings Lane: The Open Road Giveaway
42 Comments...