A hush came over the boisterous crowd as the Thai national anthem came bleating out of the crackling speakers. Spectators rose from their metal bleachers and plastic chairs to pay respect while also glancing toward the staging area to see who would be up first. The air was stale and stifling despite the sun being long gone for the day. Baht notes were passed slyly with one hand as Sangsom bottles were cracked open with the other. 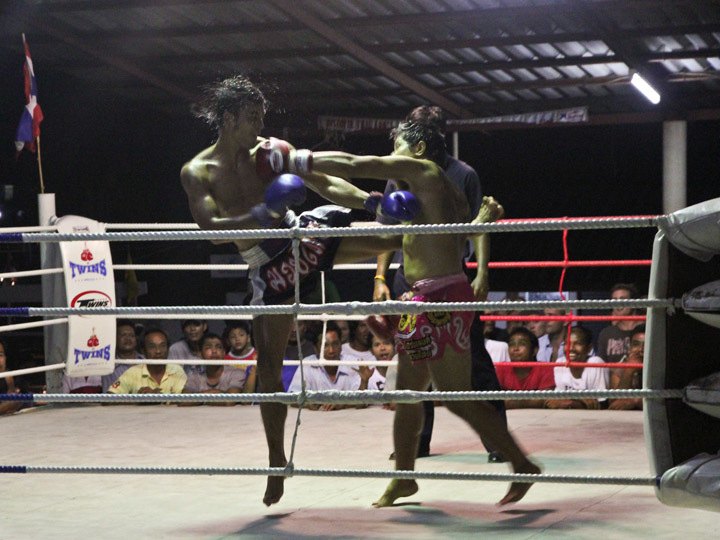 Muay Thai, the national sport of Thailand, is a combat sport similar to boxing and martial arts. However, Muay Thai uses the entire body, incorporating punches, kicks, elbows and knee strikes. It is immensely popular and stadiums and training gyms can be found on islands and in cities across the country.

On Koh Tao there are two gyms and one stadium. Island Muay Thai training camp is attached to the stadium and is where I’ve been “training” (and I use that term very loosely). Compared to the hardcore, strictly disciplined immersion programs to be found in Northern Thailand, this is more of a “get out what you put in” kind of gym. In the future I’ll write more about my training experiences, but this post is about enjoying Muay Thai as a spectator. 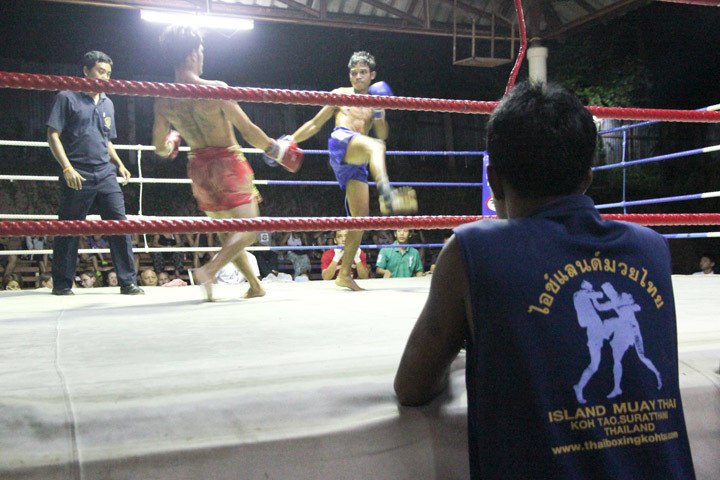 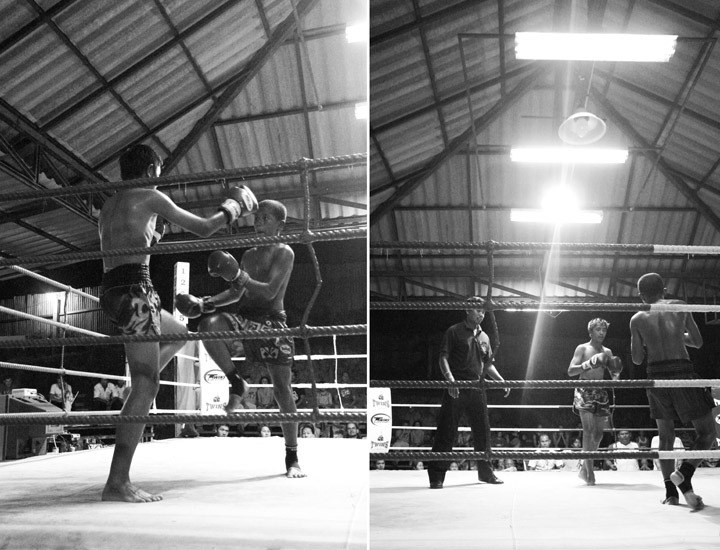 Muay Thai seems like a somewhat unlikely national passion for a gentle people who generally smile out of discomfort rather than lose their tempers. While researching I came across this synopsis of the history and importance of Muay Thai:

A gentle, peace-loving people, for centuries Thais had to defend themselves and their land from aggressive powers. They developed a form of close, hand-to-hand combat best suited for the kind of rough-terrain battle they were fighting. Over time it became a rite of passage for Thai men to take up training in this martial art. King Naresuan the Great (1555-1605) is believed to have been an excellent boxer himself, and it was he who made Muay Thai a required part of military training. Source. 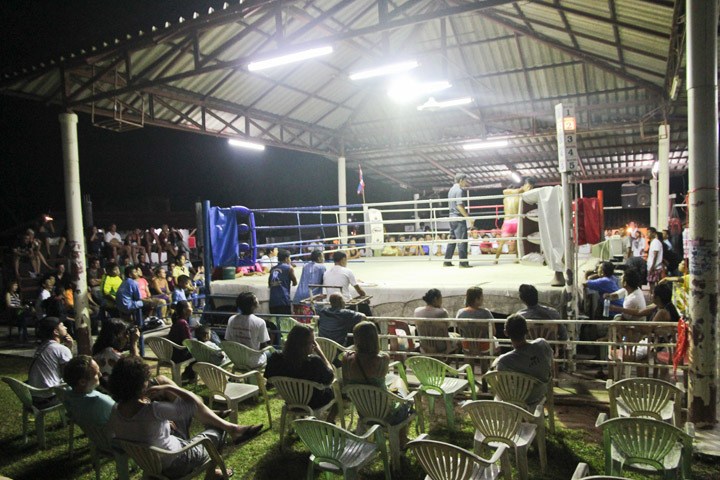 Fights vary depending on the night, but you are always guaranteed a glimpse of Thai culture, a dose of ancient Muay Thai form, and two sweaty men with zero percent body fat beating the crap out of each other. Sometimes the crowd is mainly Thai and Burmese, sometimes mainly farang (the Thai term for westerner). Sometimes the fights are highly technical and elegant, sometimes they are knock-out brawls. The fighters are children and adults, men and women. 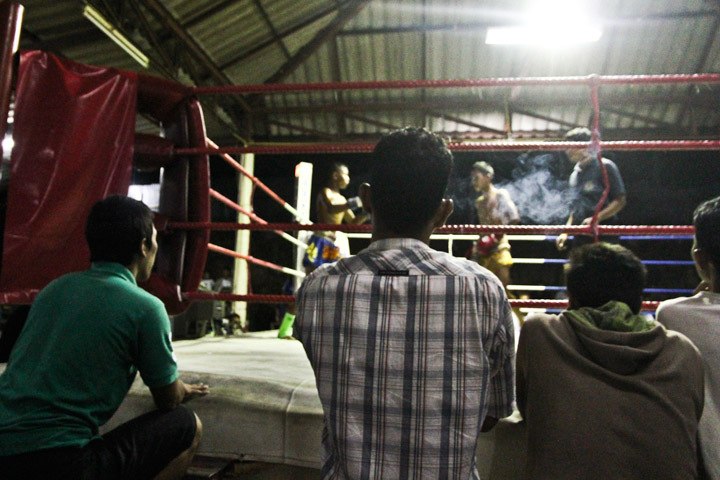 A fight night will start when you walk into the stadium and are surrounded by scratchy Thai music that Mark describes as “music that makes you want to kick people.” The crowd will stand around the staging area drinking whiskey, sizing up the contenders and placing bets. The national anthem is the eventual signal that things are kicking off. There are usually between 5-8 fights, starting with the youngest contestants and ending with the golden goose: the farang fighter. 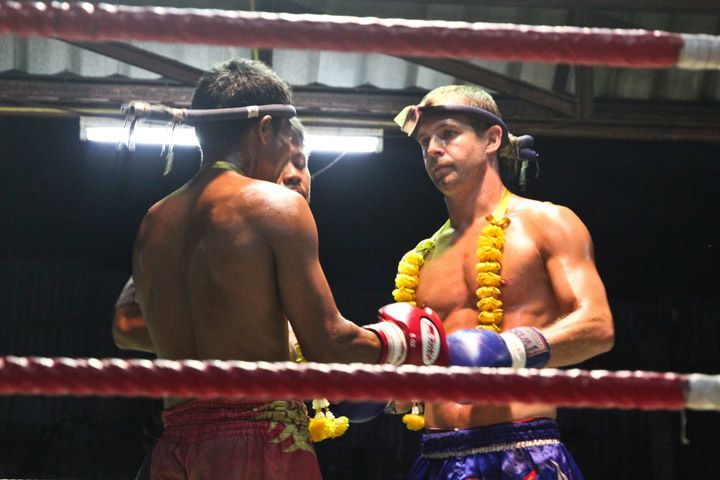 Each fight starts with the athletes entering the ring in a traditional headdress and garland and circling the ring in prayer. Some fighters, especially farang learning from very traditional trainers, do a more elaborate dance called the wai khru, in which they pay homage to their teachers. Then the formalities and accessories are stripped away and the fight begins. There are 5 rounds of 3 minutes per fight, unless someone gets knocked out first. 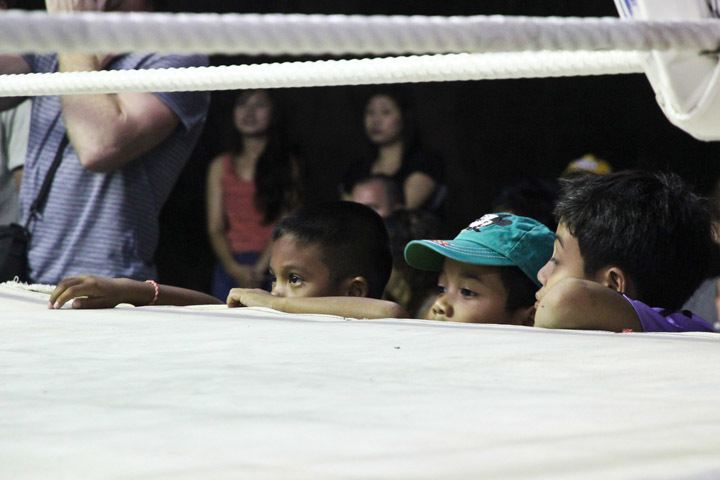 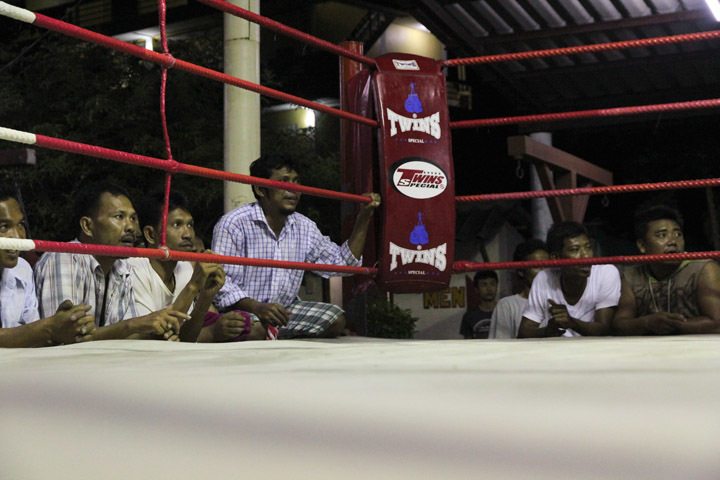 As someone who has always cringed at the thought of watching violent sports, I’m surprised how much I enjoy watching Muay Thai. But the rituals and acts of respect give the whole affair a civilized air, and after a knockout often the first person to the loser’s side is the victor, offering assistance. Because of the technical skill used in the fights, often the blows that lead to a knockout are so precise and swift I’m shocked to see a fighter fall to the ground. I’ve never seen blood drawn. 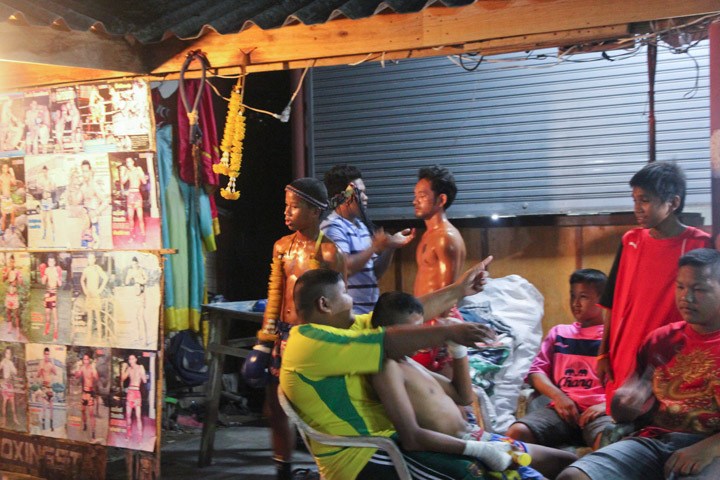 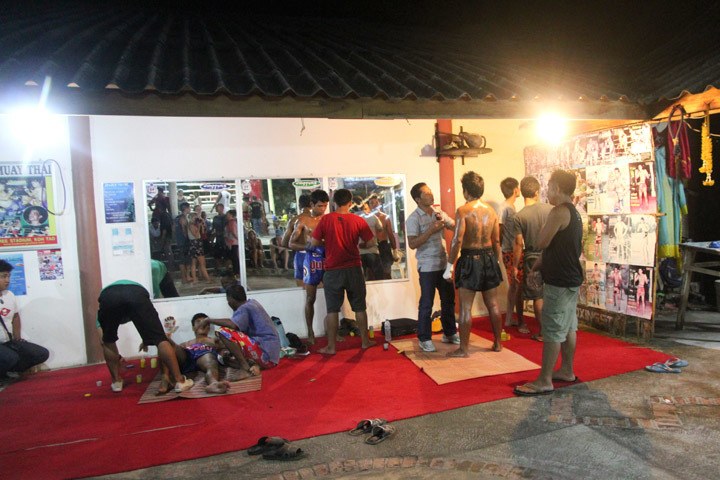 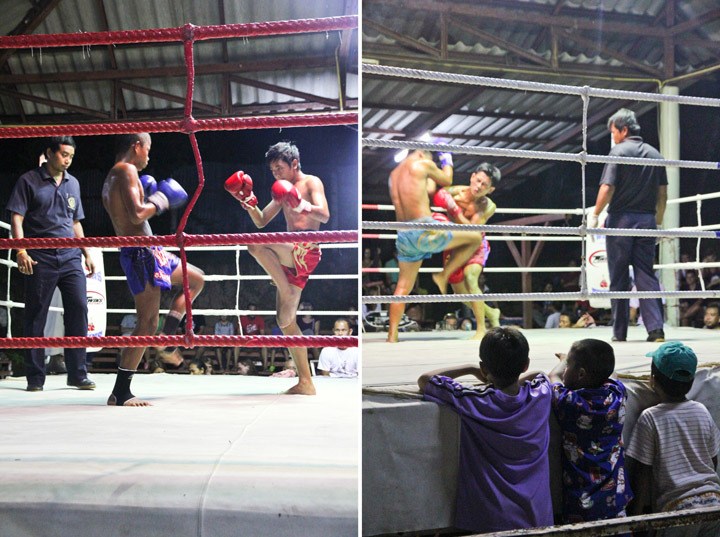 The only controversy that seems to stir in the arena is when the farang fighters go up against the Thai. The farang are often a full head taller than the Thai, who have inevitably been training since they could walk. The crowd devolves into East vs. West and for once the cheering doesn’t seem quite so light-hearted.  There are often loud grumbles of cheating and unfair judging. While I don’t know enough about scoring to have a basis for it, it does seem that for a Westerner to beat a Thai there needs to be a clear knockout. But hey, this is Thailand. 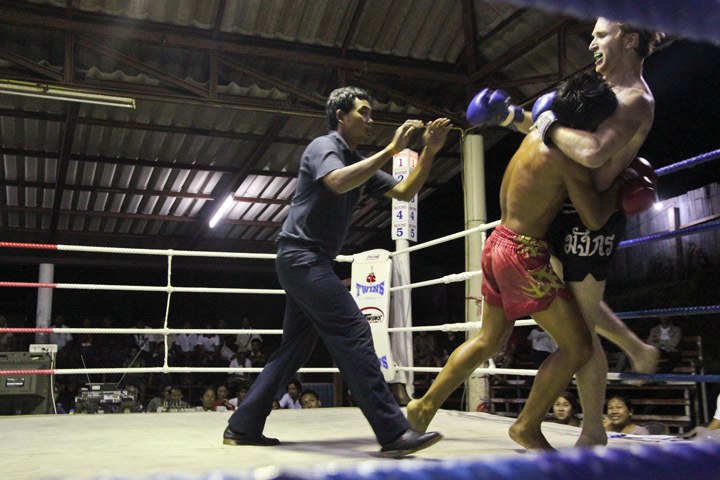 I’ve attended three Muay Thai nights on Koh Tao, and especially since starting training I’ve grown to love them. I hope to someday attend a fight at one of the massive stadiums in Bangkok, but those tickets are quite pricey, starting at 1,500 baht ($45usd). Comparatively, I can stand practically ringside in Koh Tao for 500 baht (actually less, as I get a training student discount!) If you’re a gambler, don’t forget to bring a baht or two for placing bets . 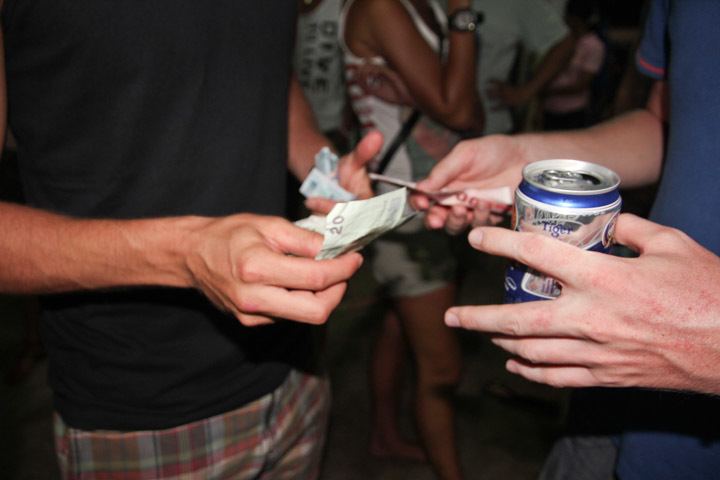 If you are heading to Thailand, I encourage you to check out a Muay Thai fight. There’s nothing quite like it for a combination of culture, fun, and cheap whiskey. Who knows, it might inspire you to start training! 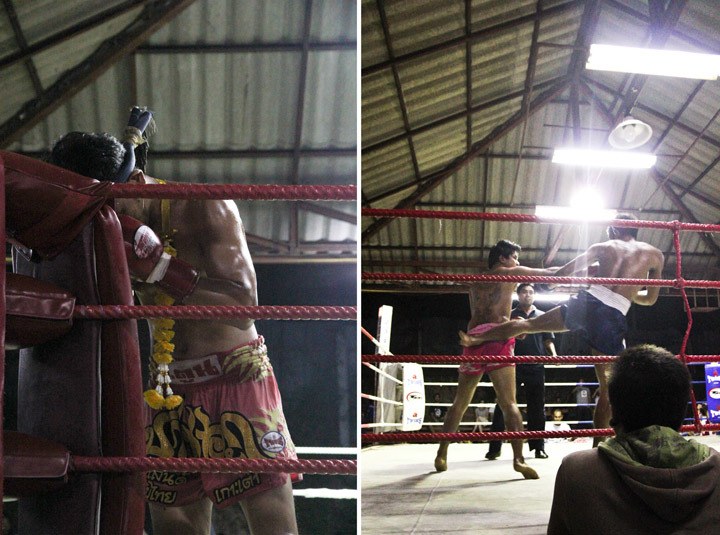 While these photos may give you an idea of Muay Thai, going to a fight is a full sensory experience. The smell of sweat, the visual speed of a uppercut punch, the sound of that makes-you-want-to-kick-someone music. So you know what I did, right? I made a video. Enjoy!

Have you ever attended a Muay Thai fight? Would you? I hope I’ve convinced you to say yes! 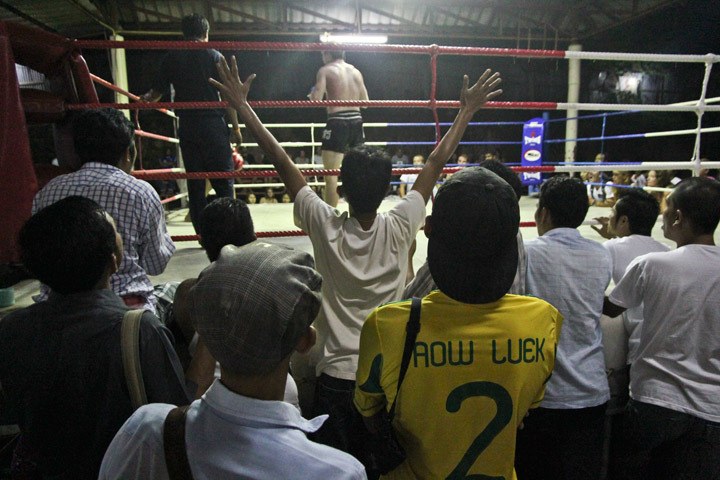 From Spin Class to Sugar Dens: Where to Stay, Eat and Play in Thonglor