As you may have noticed, all the London activities I covered in my previous post were free! We decided before we arrived that we would splurge on one thing, and that was the double decker bus City Sightseeing Tour, the same company we went with in Glasgow and Edinburgh. It is pretty pricey at £26 (we got 10% off that price for having our receipt from the Edinburgh tour) but is valid for 24 hours and includes a river cruise and three different walking tours (though if you can cram all of that into one 24 hour period, I bow down to your travel hustle moves). 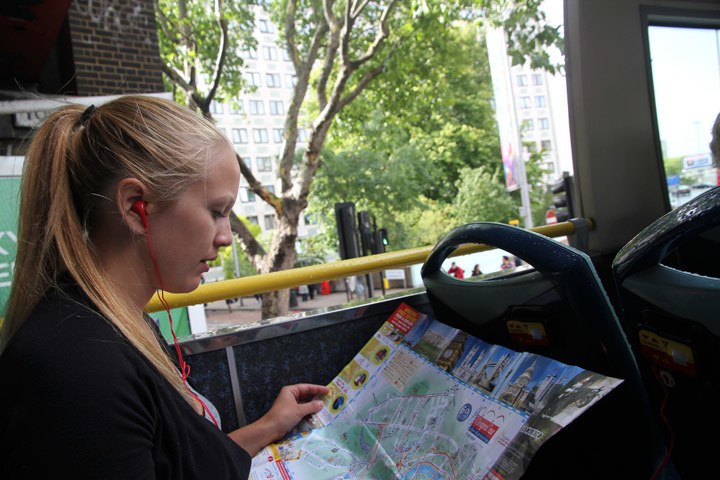 The ticket allows you on any of the many routes on offer. The main lines are the blue, red, and yellow. The red and yellow are nearly identical but the yellow line offers an English speaking live guide. I highly recommend going with a live guide if you speak English! (And I’m assuming you do, since you’re um, reading this). Sometimes the pre-recorded voice can be quite monotone and nap inducing. 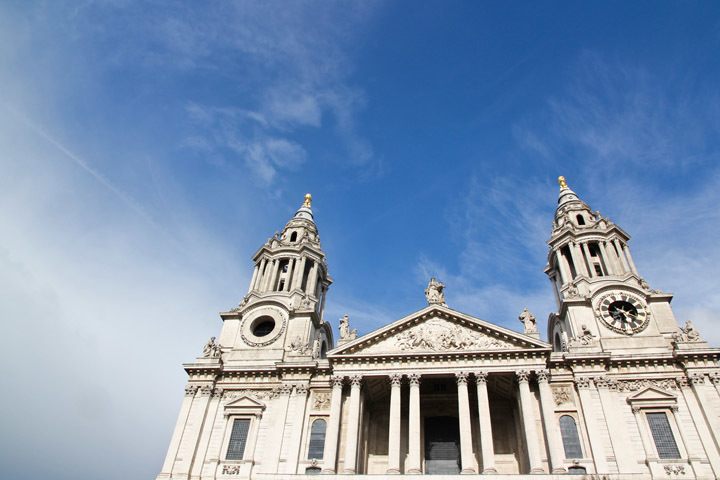 For a first timer to this large city, zipping around on an open top bus was a great way to get oriented and make the maps I had been squinting at come to life. I was able to glance at and learn a bit about attractions that weren’t in my budget this time and drive through neighborhoods I wouldn’t have had time to walk through. In addition to the major attractions you can hop on and hop off at, you are treated to so many little surprises. 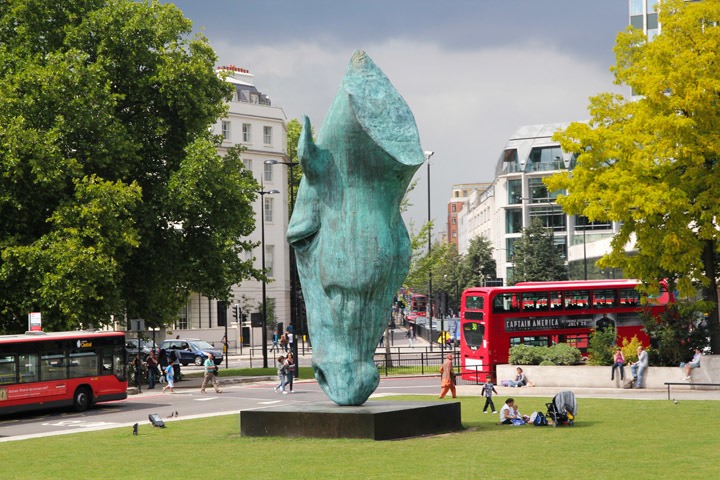 I was loving how many amazing sculptures we drove by. The former art student in me always cheers at the sight of public art. 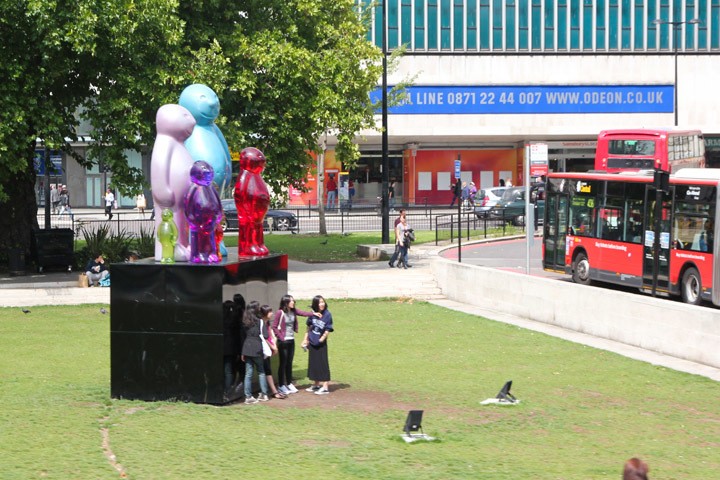 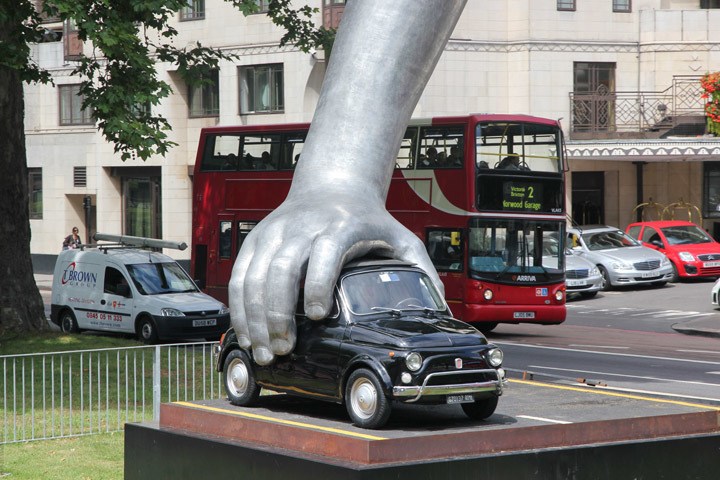 My other favorite bus sighting? Funny signs. I found my hometown homage, Albany Street, as well as one of my favorite pieces of street art, ever. 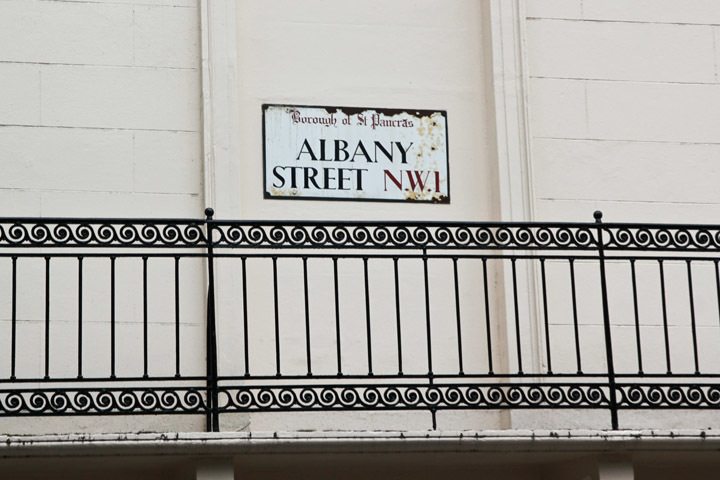 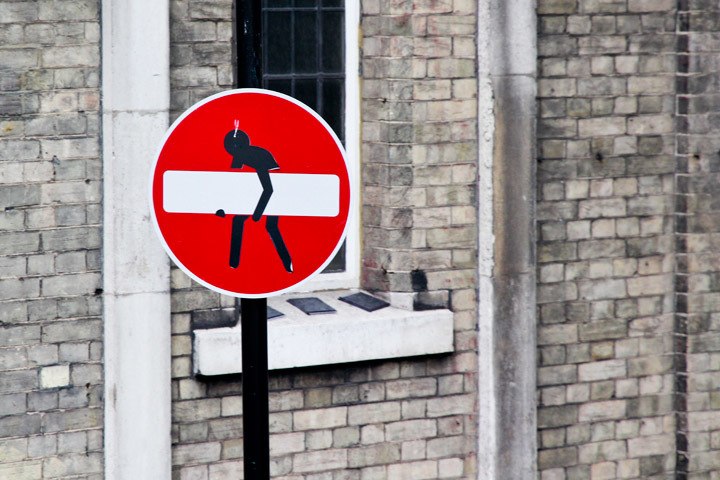 We circled the London Castle, which was unfortunately not very picturesque as it was covered in scaffolding for renovations. 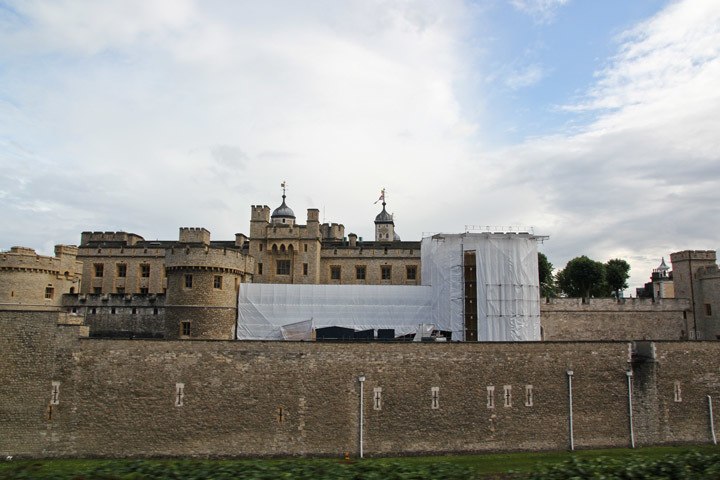 Next came my personal highlight, driving over the Tower Bridge. It really looked like something out of a fairy tale, and not something you would ever find in the states. It just screamed London to me. 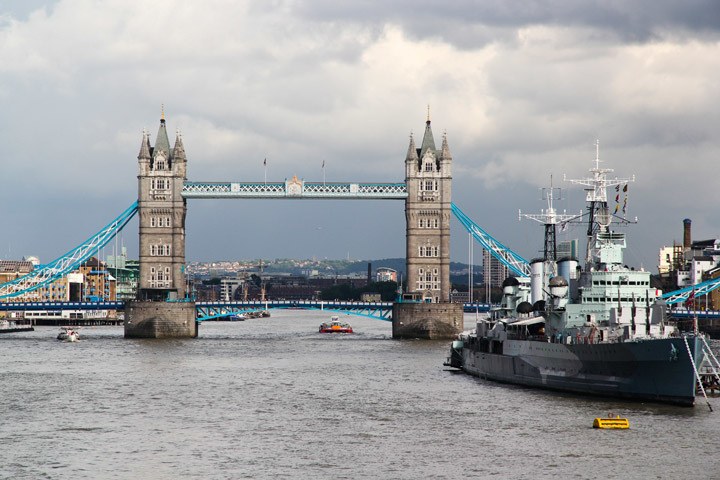 It was much more impressive than the plain-Jane London Bridge, which was so boring it prompted me to turn the map upside down seven times, scratch my head and continually ask Mark, “This is IT? Are you sure?” while he hummed London Bridge is Falling Down in the background. I’m sure everyone walking by had one disdainful thought: Tourists. 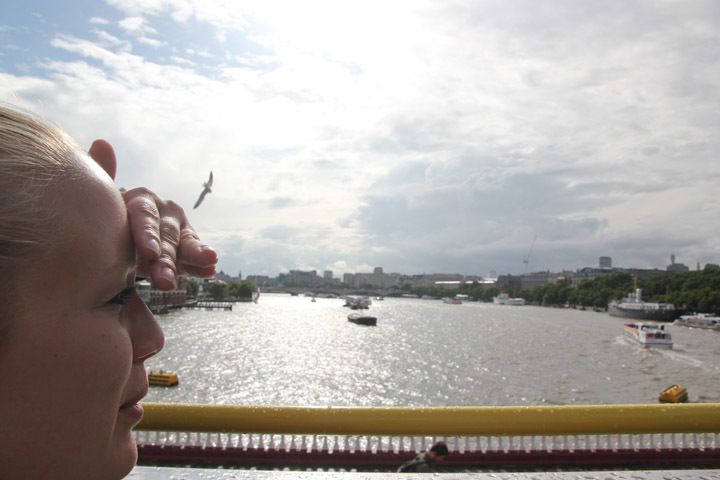 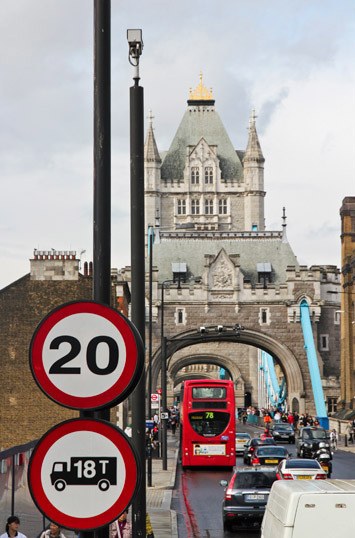 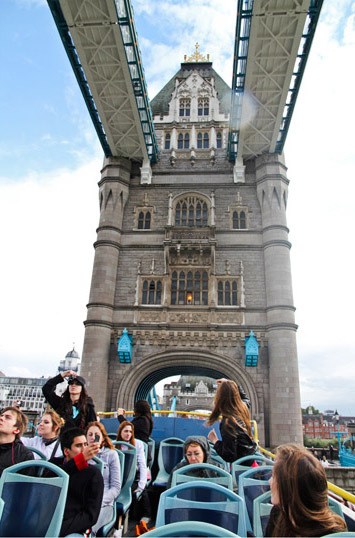 We saw so much more on the bus, including the London Eye, Big Ben and the Parliament building. But we got even closer the next day when we cashed in on our free city River Cruise….

Lucky for us the boat tour departed n0t far from where we were staying in Lewingsham, so it was the perfect way to hitch a ride downtown on our last day in London. My first lesson was that the River Thames is not, in fact, pronounced the River THAME-Z. (For those as clueless as me, spare yourself the embarrassment and memorize this: River Temz. 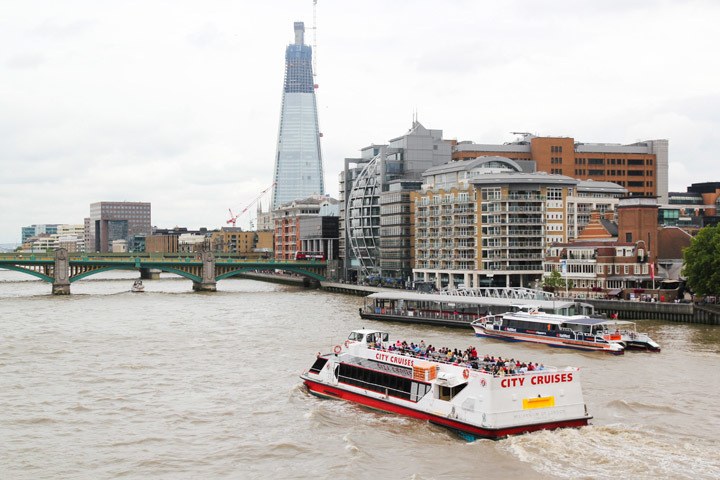 As we started out quite far from the major tourist attractions, I was skeptical how much would be of interest. I was crazy to think that as our brilliantly dry-humored guide kept us engaged with tales of war, wealth, and famous (and infamous) Brits. It is always interesting to see how people actually live outside business and tourism oriented city centers, and the modern architecture in the upscale outskirts of the city was no exception. 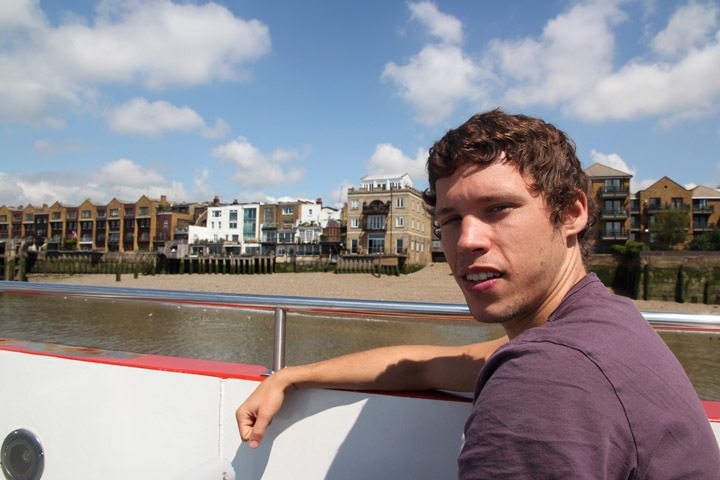 When we bobbed past The Globe Theatre my mind went straight back to 9th grade English class and my Shakespeare loving teacher Ms. Skeals. She was an anglophile through and through and many of my impressions of London came straight from her wistful stories. I wish I had had her address to send her a postcard. 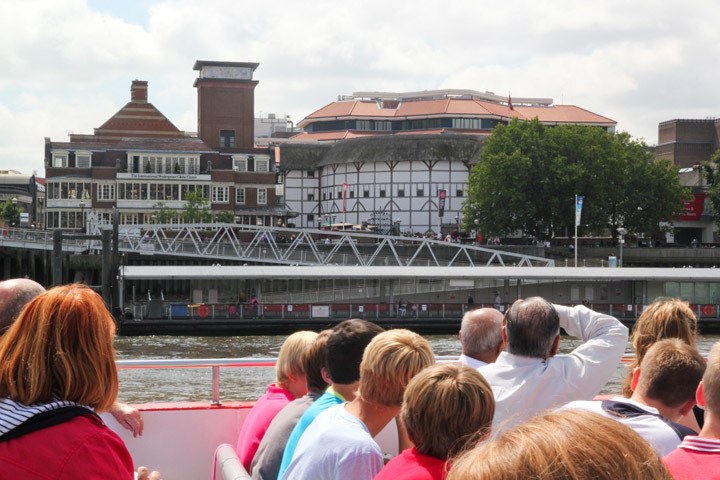 Next up was the iconic London Eye. As a major fan of the Wonder Wheel in Brooklyn I was dying to get on this thing, but the £20 ticket turned me off. 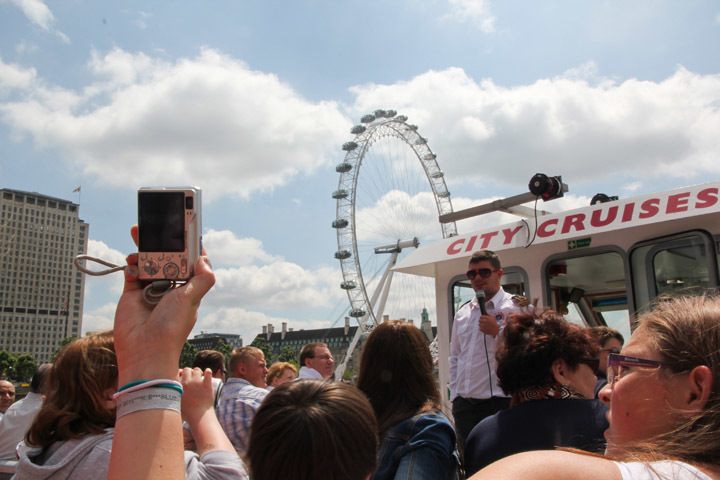 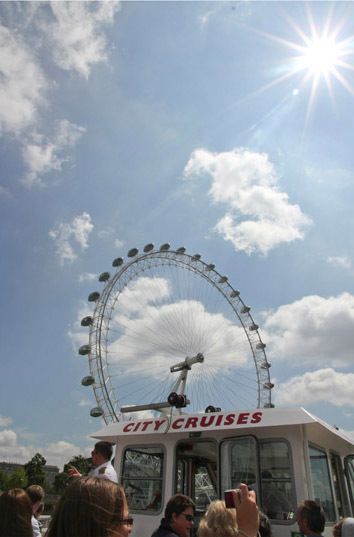 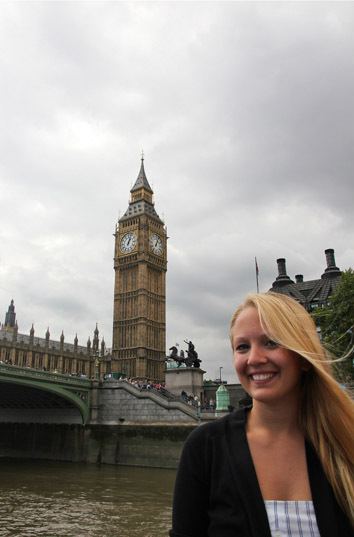 The cruise ended under London’s most iconic symbol, Big Ben and the Parliament Building. We even heard Ben chiming as we docked. 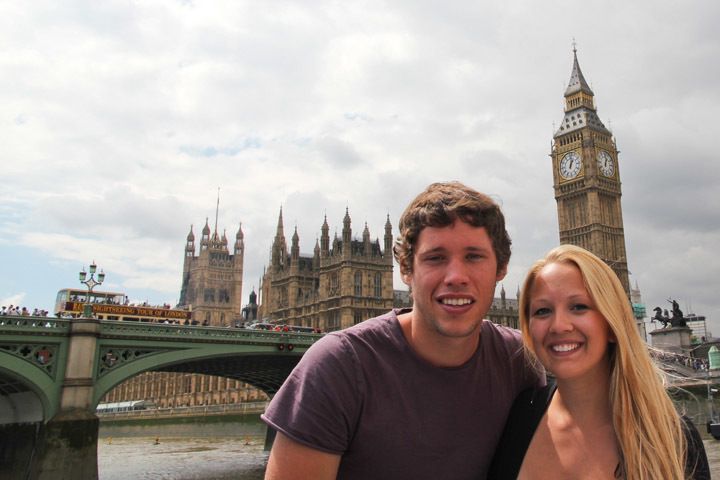 Given our limited time in this densely layered city, I was happy with the solid first impression I was able to gain. London is so deep in history, so alive with energy, and so filled with character. As a city lover and someone dating a UK citizen, I’m sure this won’t be my last time in London. I’ve now explored by foot, by bus, by tube, and by boat. I suppose next time I’ll have to budget for a helicopter tour!

A Weekend in Manchester