Mykonos, our last stop in the Greek islands, is not exactly known as a “day” destination. This is an island that roars to life when the sun goes down… which is exactly when our ship would be pulling away towards Turkey. 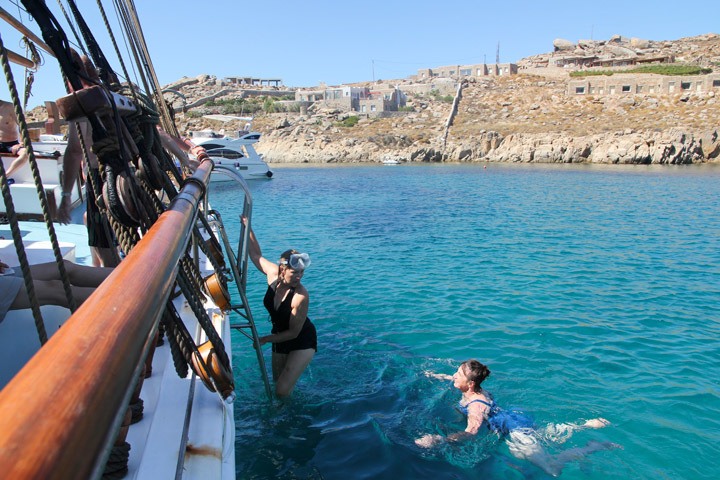 Since Mykonos isn’t exactly known as a cultural destination either, we decided to use this as our “sun and fun” time. As I mentioned before, we had $500 each in shipboard credit to use, so we booked a Silversea’s tour called “Sailing Around Mykonos.” Despite our previously learned lesson, we were pretty psyched for this.

Our first stop on the tour was to dock outside Super Paradise beach to swim. I wondered why we weren’t going to the actual beach when I remembered that Super Paradise is mostly a nude beach, a fact confirmed the pair of binoculars my mom had stashed in her beach bag. 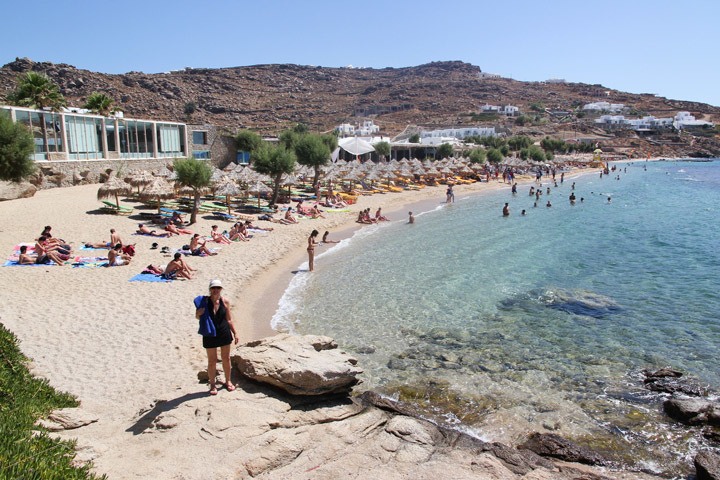 Next we made our way to regular (non super, apparently) Paradise Beach, where we were allowed to step foot on the actual sand. I always pictured Mykonos in a similar way to how I pictured Ibiza… dripping with beautiful, painfully cool people. We didn’t see many of those. However, it was about 11am so I’m guessing they were still in bed from the previous night’s beautiful people escapades. 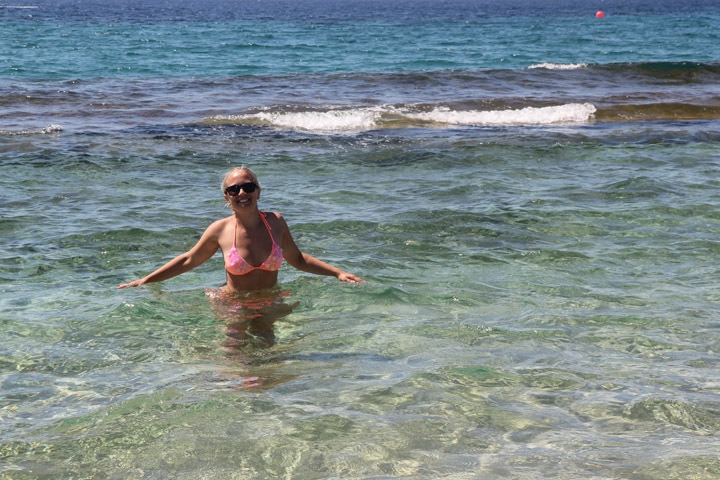 To be honest… we were underwhelmed by the tour. In fact, so many people were so underwhelmed that we were given a 25% refund. Mykonos had beautiful beaches, but I would have preferred to take a bus to one and plop down on it rather than cram into a pretty small boat with lots of people and be rushed around. In comparison to the amazing Santorini sunset cruise (which we booked ourselves), it was ho-hum. 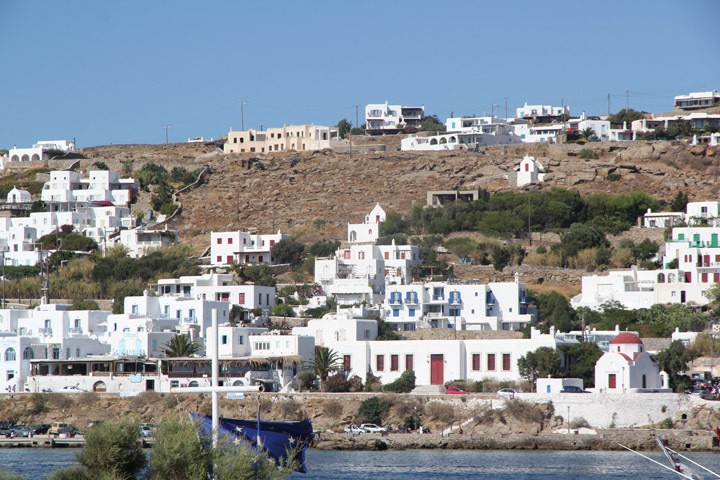 After hopping back to the cruise ship to take advantage of free (well, it feels free when you paid for it months ago!) lunch, we returned to the island to explore Mykonos town. 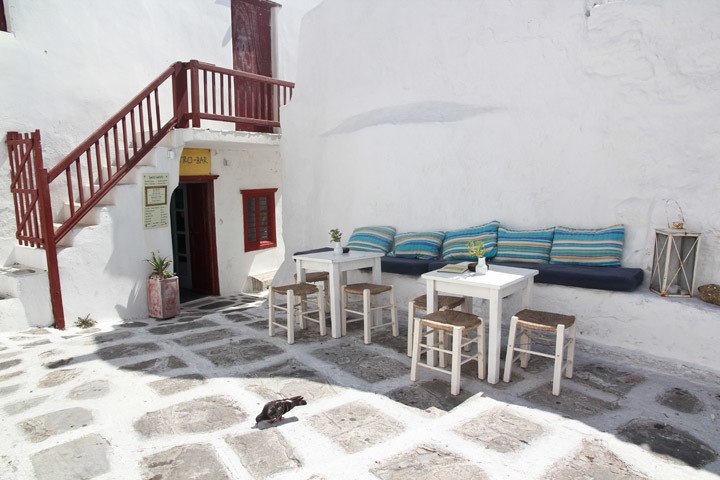 Mykonos Town, while still maintaining a more charm than, say, Heraklion in Crete, was a bit grimier than Santorini. Still, we enjoyed meandering around and popping into the little gelato shops and trendy boutiques (and spying on our cruise ship!) 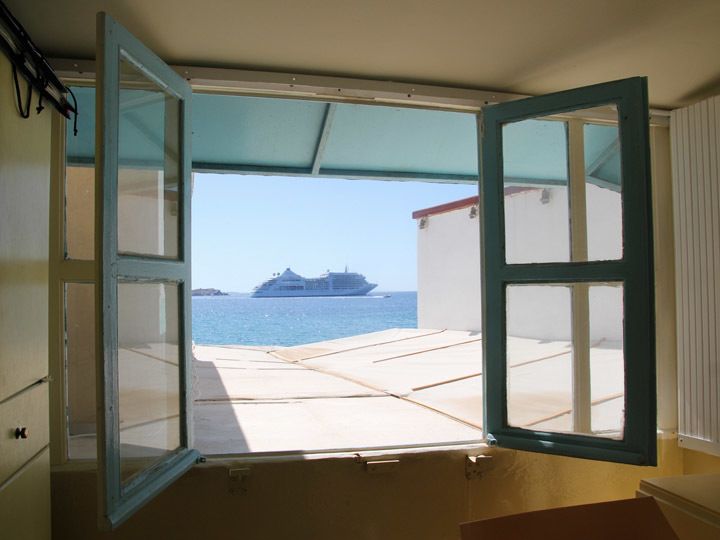 Some of you may know that I studied art while I lived in New York. So don’t be embarrassed if I’m blowing you away with some fancy terms here with this comparison: Santorini was very “round.” Curving Streets, arching roofs, etc. Mykonos was very “square.” Right angles, boxy buildings. Okay, I think that’s enough technical architecture speak. 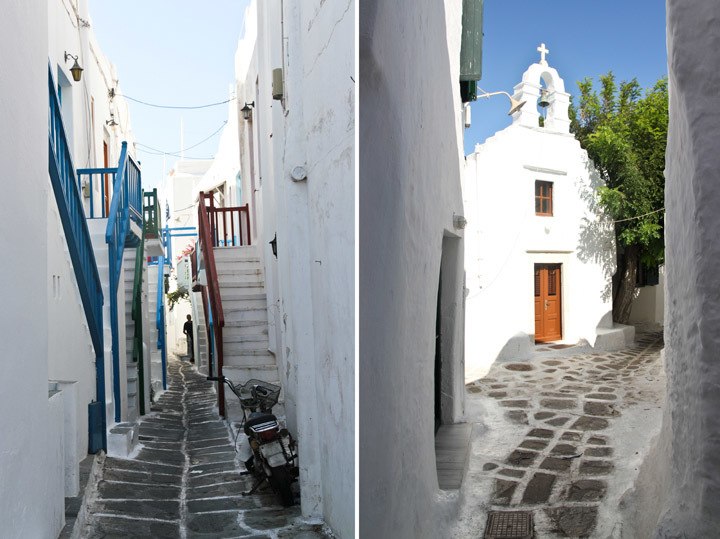 Despite Mykonos being a nocturnal island, we were able to find ways to wile away the sunny afternoon. First we headed to Little Venice, named for its location hanging over the water. I’ve never been to Venice, so I can’t really comment on that part. But it was certainly little. 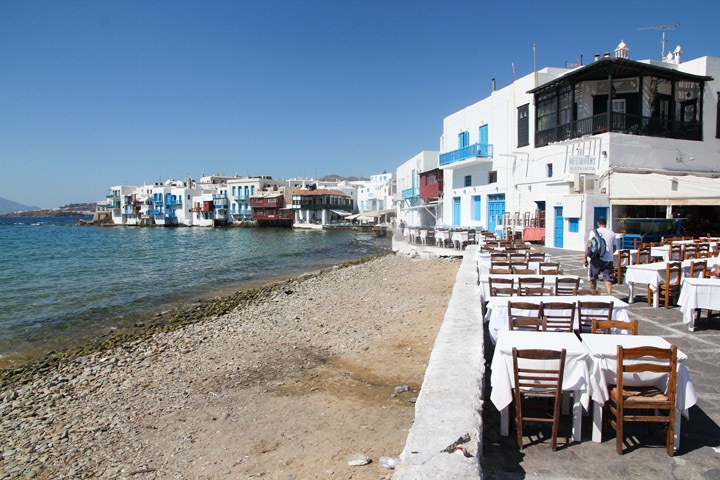 Next up was finding the famous Mykonos windmills, echoing back to the days when wind power processed the island’s grain. Today they are simply a beautiful backdrop for photos, and a reminder of what island life used to be. 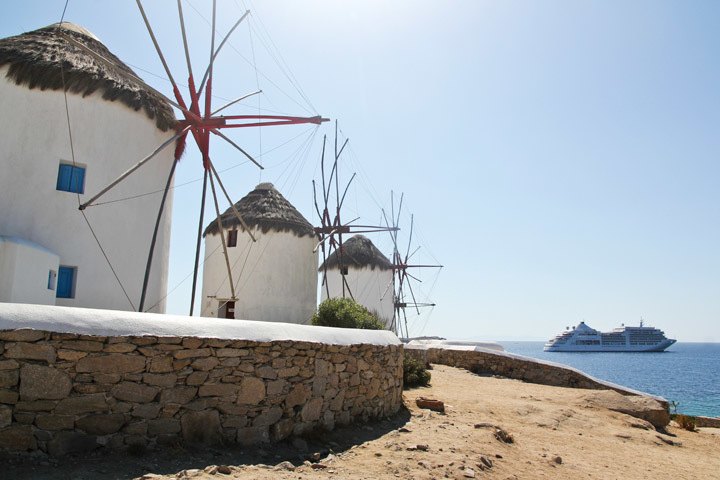 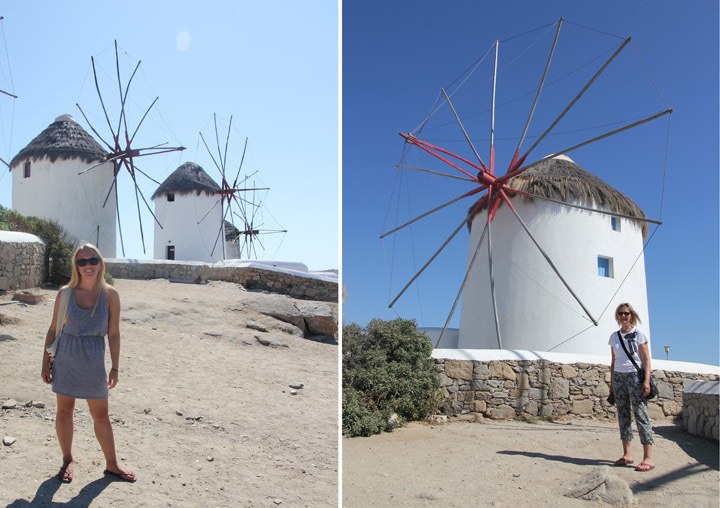 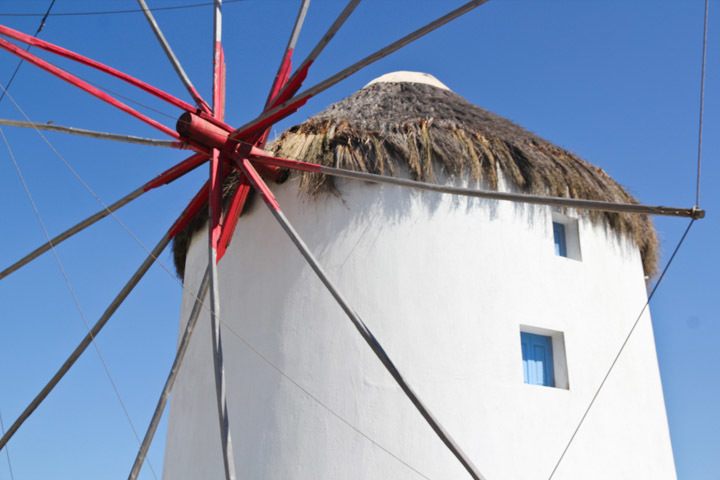 Moving further, we even found another outdoor movie theatre! We loved the one in Athens so much, if we were staying longer in Mykonos we would have definitely caught a film. 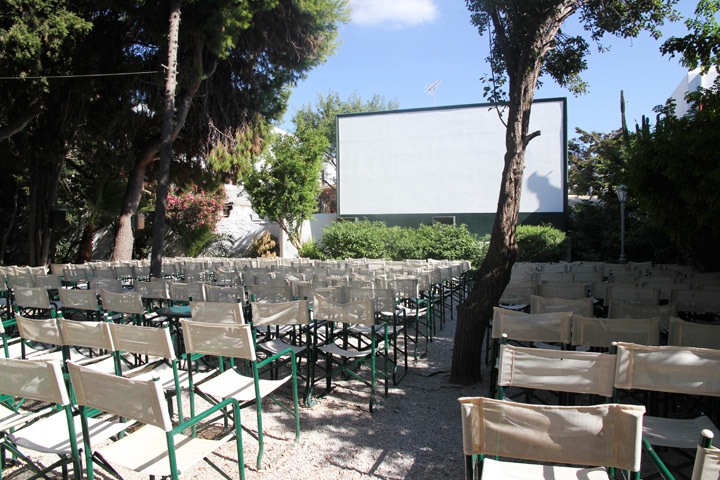 There was one Mykonos landmark I had left on my list: The pelican. Gracing endless postcards and guidebook pages, the pelican is as much a symbol of Mykonos as the beautiful windmills or the crooked streets of Little Venice. Just as I was about to give up hope, we spotted one snoozing away under a bush. He was so still we almost thought he was fake! We stood around for a bit hoping he would wake up and I could get some Nat-Geo worthy wildlife shots, but alas, we had to settle for this. Evidence, at least. 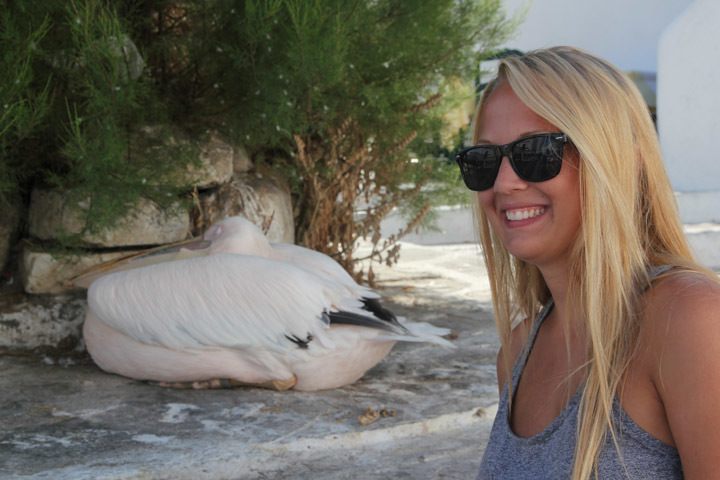 On our way back to the ship we popped into the Folklore Museum, one of three small museums in Mykonos Town. I compared it to a glorified antique store, but my Mom got pretty into it. It’s free, so you can’t lose by popping in. 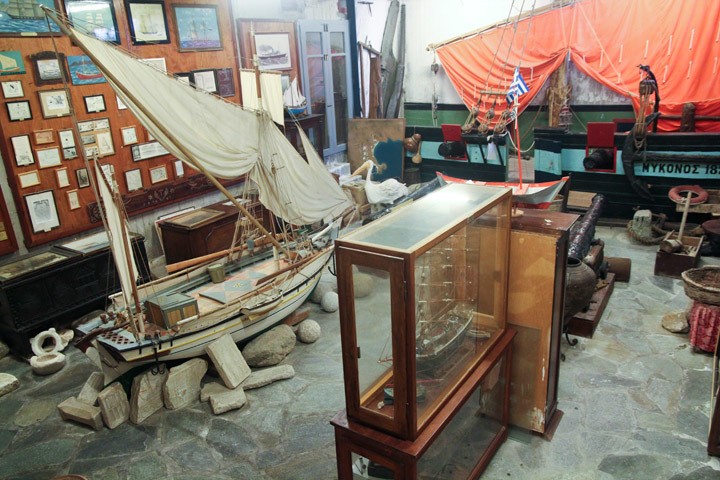 Mykonos wasn’t the most beautiful or the most exciting port to stop in. But that doesn’t stop me from wanting to come back. Next time, however, I think I’ll stay the night. 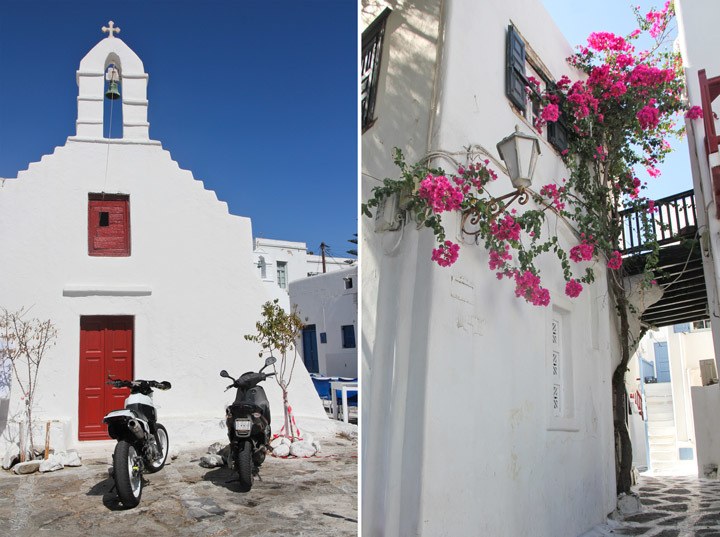 Swinging Back Through Santorini

Exploring The Amazon onboard The Aria