One benefit of being a travel blog addict is having some great recommendations before even arriving in a destination. While Mui Ne may be best known for its watersports, we were also eager to get out and explore dry land. When we were deciding where to go with our rental motorcycle, I though back to a post by Adventurous Kate in which she described driving to a far away temple on a hill. 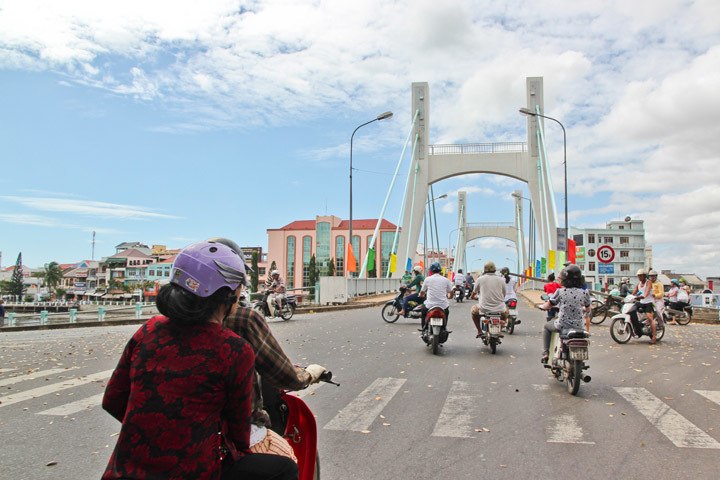 And so off we went towards Ta Cu Mountain, in search of its beautiful reclining Buddha. But our directions were horrible and our Vietnamese even worse- so we ended up following a now-familiar pattern of using our whims and intuitions to navigate for over in hour, unsure if we were anywhere near our final destination. Whenever I started to get a bit nervous about this arrangement, I was quickly distracted by a beautiful valley of dragon fruit plants, or an 18 wheeler truck trying to pass us on a two lane highway. 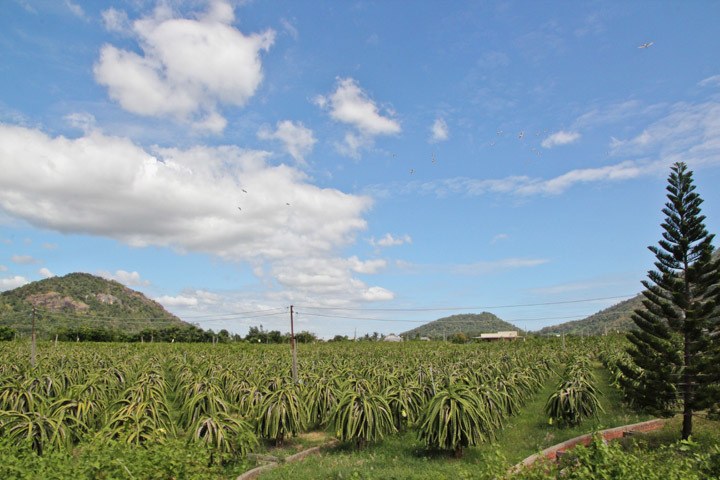 Once again our intuitions seemed to be finely tuned and we found ourselves at the base of Ta Cu Mountain. As the hard part was over, we patted ourselves on the back for skipping a tour and DIY-ing it, once again. We did not, however, DIY our trip up the mountain. Instead, we took the cable car. 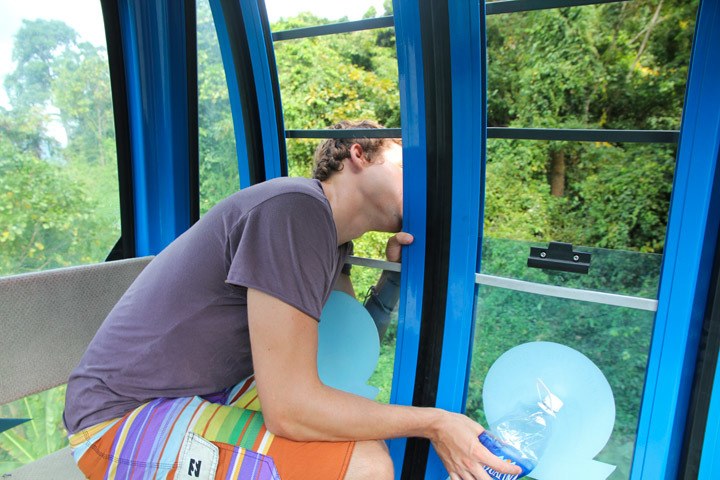 On our way up I realized that we were in our third cable car since reaching Vietnam. And it wasn’t getting old. Not with the beautiful views and the boyfriend sticking his head out the window like a dog in the front seat of a truck. 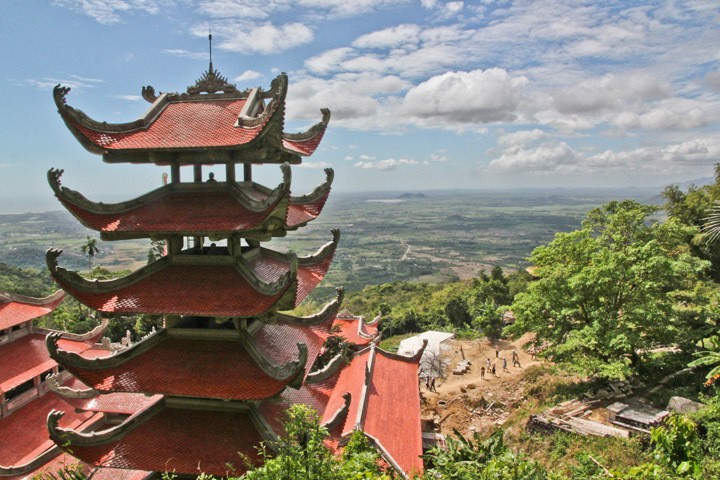 Our physically arduous ride up the mountain was rewarded with some beautiful views. This was the Vietnam I had pictured in my mind: crumbling pagodas overlooking lush tropical vistas. 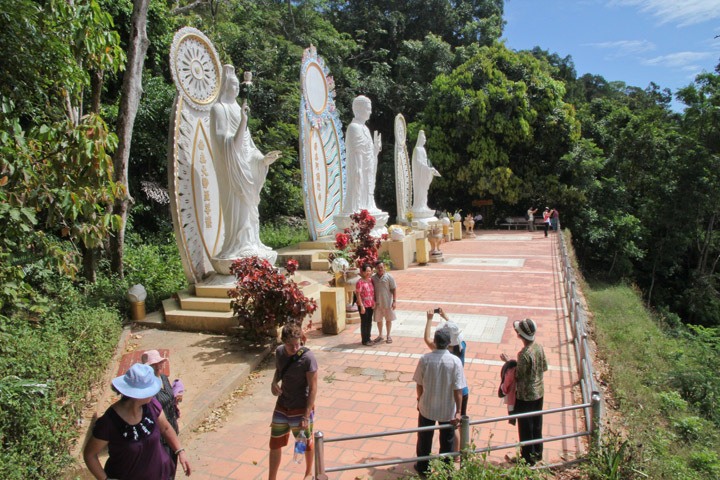 Although we had spared ourselves the vast majority of the required effort by taking the cable car, we did have to do a fair bit of trudging through the simmering heat. 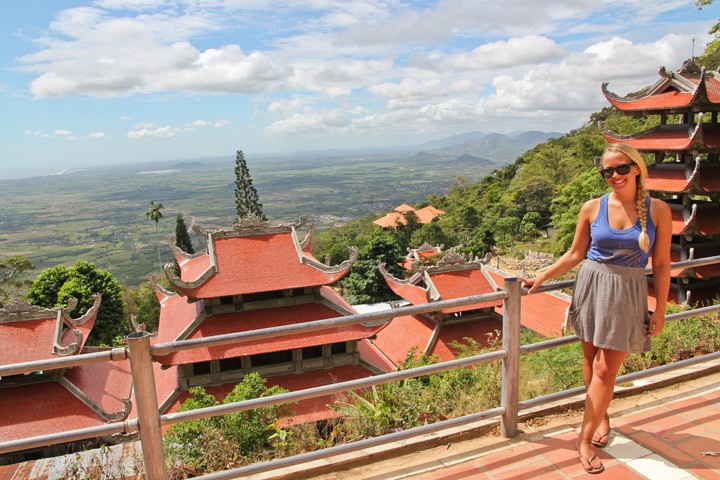 The Buddha was worth it. At 59 meters long, it is even larger than the infamous reclining Buddha in Bangkok. Since we visited, I’ve seen photos where the Buddha was mud-streaked and grey. But when we arrived he was as pure and white as he’ll ever be, as evidenced by several stray paint cans lying about. 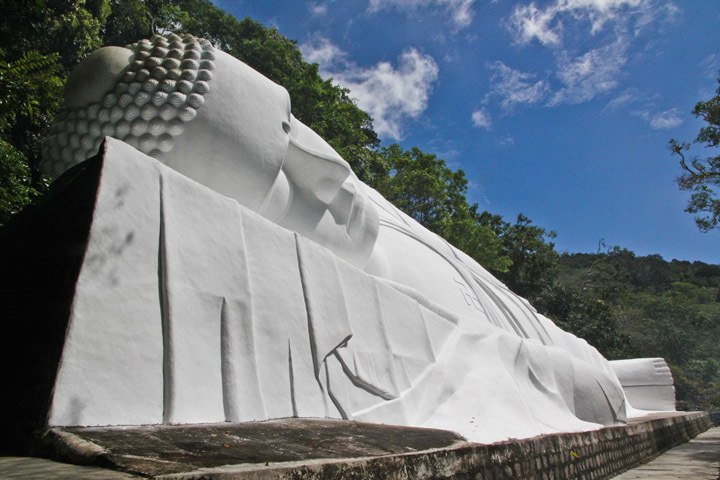 For a sense of scale, look at this photo of me and the Buddha’s feet. I’m about the size of a couple of toes. 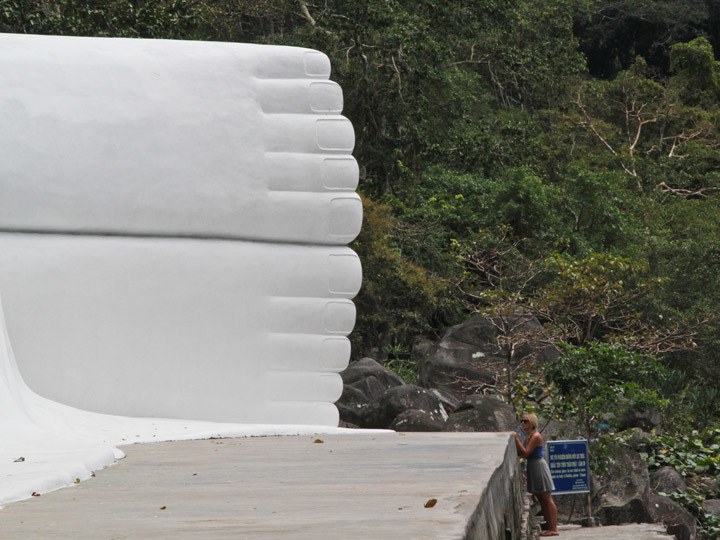 We were two of very few tourists there, and absolutely the only two Western tourists. We even had a stretch of time where it was just us and the Buddha. 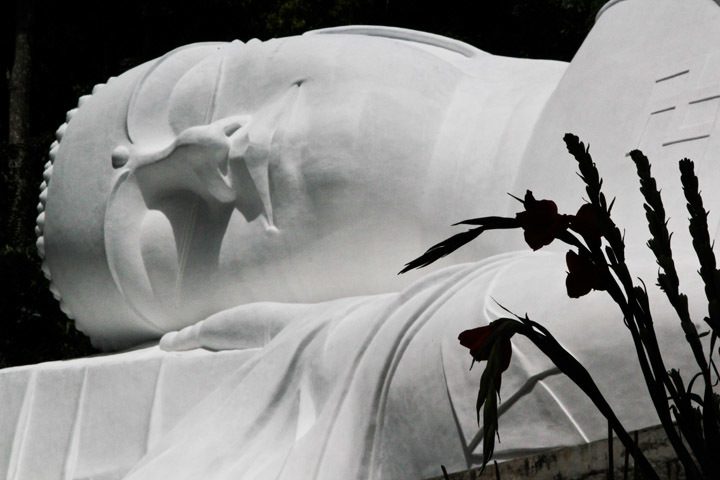 I’m not very surprised though, as this spot gets only a brief mention in Lonely Planet. Finally, my blog reading addiction was paying off! Getting to Ta Cu Mountain was an adventure, and it was worth it. 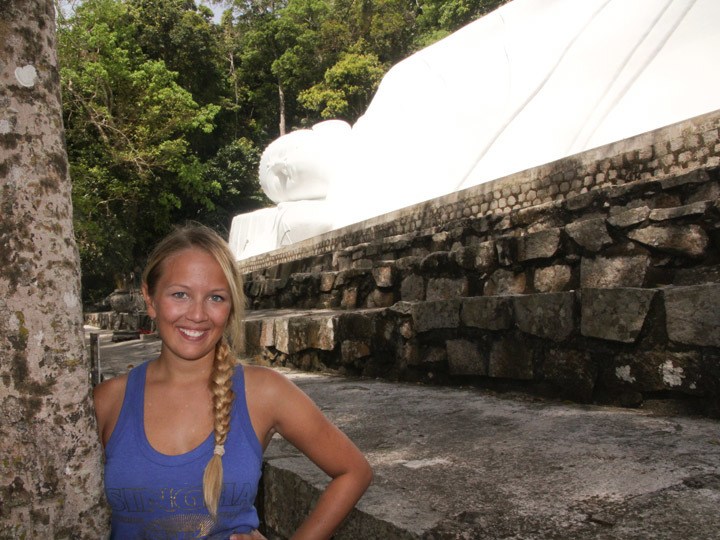 We didn’t linger for too long, as we had much more to see in Mui Ne… 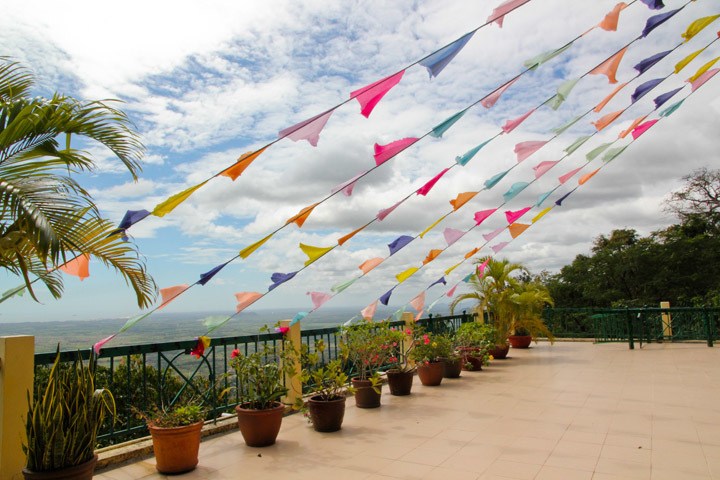 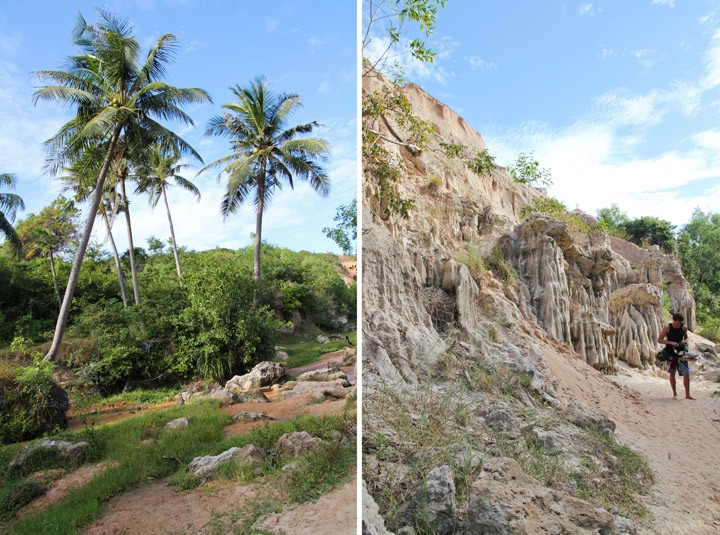 A staple on the afternoon jeep tour peddled in every travel agency in Mui Ne, the Fairy Spring is a poetically named stream that snakes through a scenic patch of dunes with now-famous rock and sand formations. 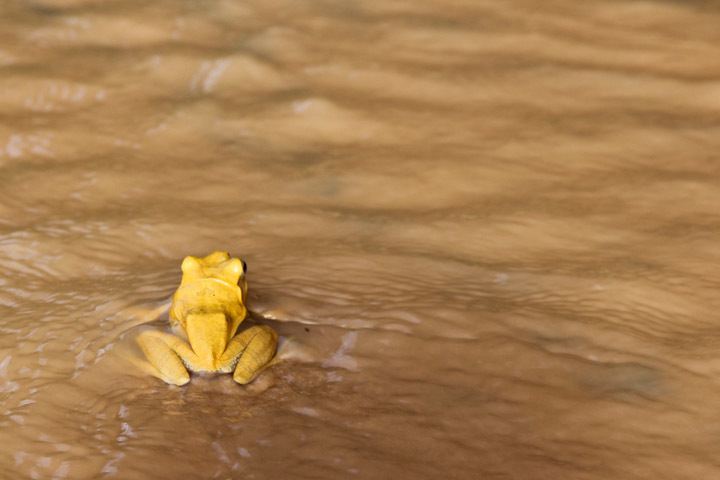 Because it is Vietnam, there were three separate attempts to part us from our money with ten minutes of arrival (1-parking scam, 2-admission scam, 3-“tour guide” offers). Managing to avoid them all and enjoy a free attraction for free, we reached the stream, slipped off our shoes and started up the watery path. 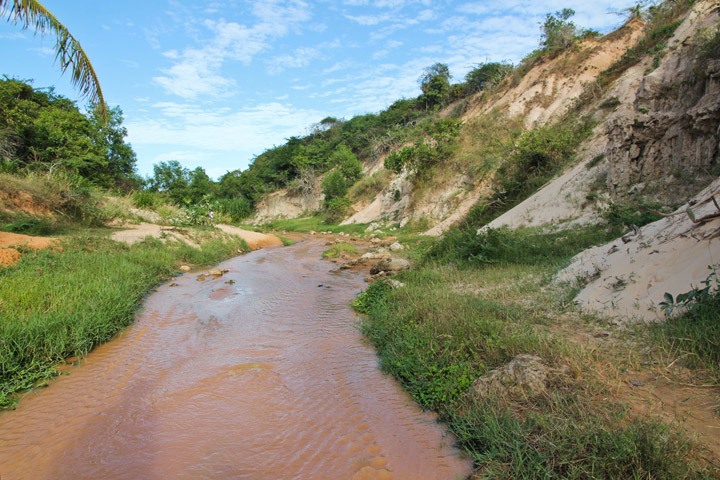 At first, I wasn’t so impressed. But that quickly gave way to awe at the other-worldly landscapes and colors unfolding in front of us. 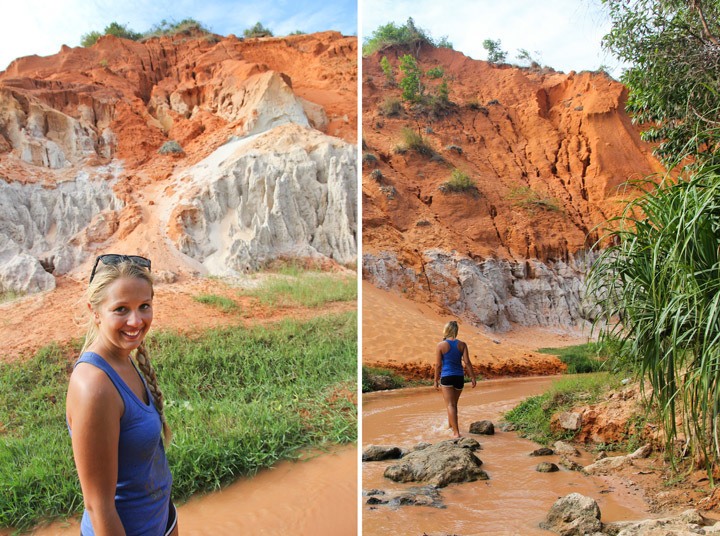 The bizarreness was enhanced by the group of Vietnamese teenagers perpetually a few steps behind us who would periodically build up their bravery, run up to snap a myspace-style photo of themselves and one of us, and run back to the group shrieking. 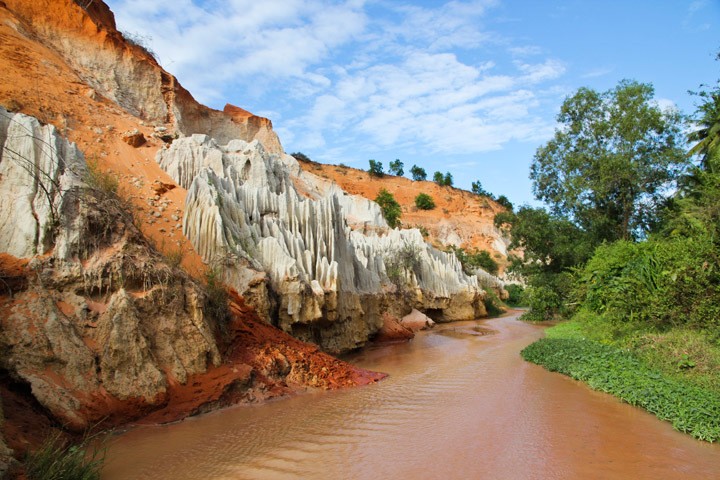 At then end of the stream there was a rubbish-filled waterfall to wrap things up. In this case, the journey absolutely is the destination. 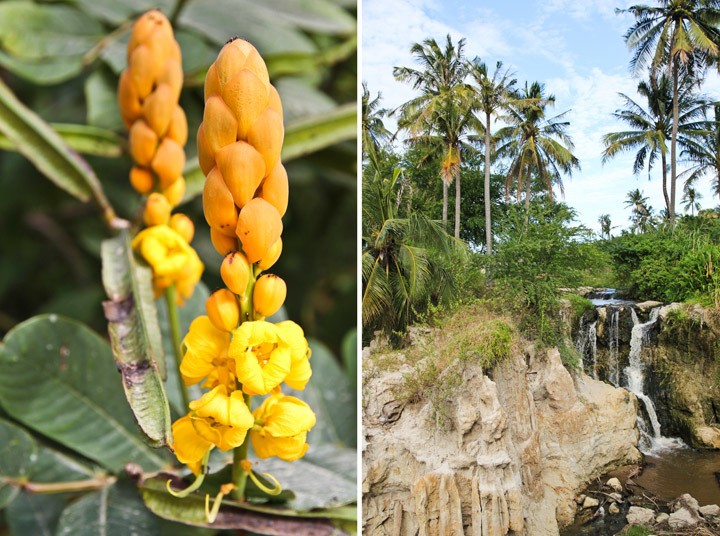 Despite my doubts, the Fairy Spring really was worth the hype. No one should come through Mui Ne and miss this nearby and free natural wonder! Ta Cu Mountain is worth the journey for those with more time and with their own transportation (or willing to pay for a tour!) But we still hadn’t yet stopped at Mui Ne’s most famous slice of  Mother Nature…