A Comedy of Hangovers: The Colca Canyon Part II

When we left off, Dave, Gus, Leah and I were just entering the Colca Canyon. It was 11:30 in the morning — a good four or five hours later than most tour groups start their descent — but we were confident we could make it to Sangalle by sundown. We could see it after all! I can’t decide if it’s an amazing treat or a horrible torture to be able to stand at the starting line of a two to three day trek and see the entire thing laid out from start to finish.

According to our crude map, we had four hours of knee-pounding descent ahead of us before reaching the first Canyon settlement, San Juan de Chuccho. 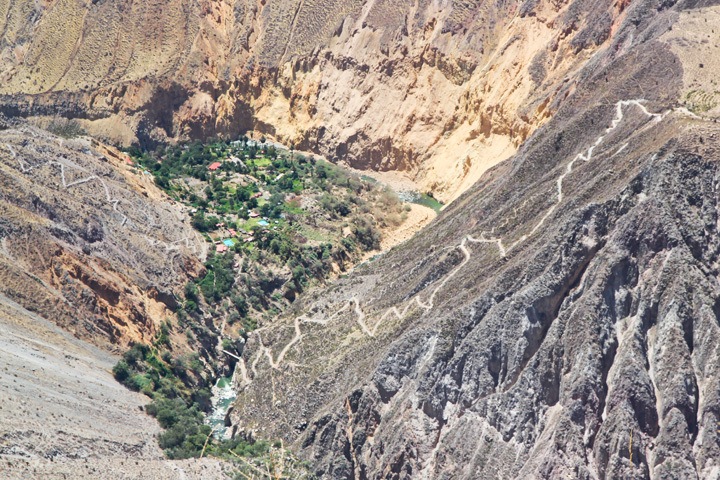 Now, I know what you’re thinking after seeing that photo above. How can I manage such fashionable hiking attire from halfway around the world? Well, I like to think of it as a gift. You might be able to replicate the look, assuming your aunt in Florida has jogging shorts from 1995 to give you (you’ll know the year because it will be embroidered on the right thigh), you have a geeky pocket-encrusted vest to wear, and you can find a white visor with silver embroidery circa H&M 2003 in the back of your closet.

The descent was fairly challenging simply because it was relentlessly downhill and there was zero shade from the intense sun (which, you know, personally I thought kind of invalidated the group’s mocking of my visor?). When we reached the bridge at the bottom of the canyon, a woman was waiting to greet us, and told us we had made great time. She was hoping we were planning to stay the night in San Juan de Chuccho, and raised her eyebrows at us when we told her we were going on to Sangalle that evening. She did point out a scenic shortcut towards the village, for which we were grateful. 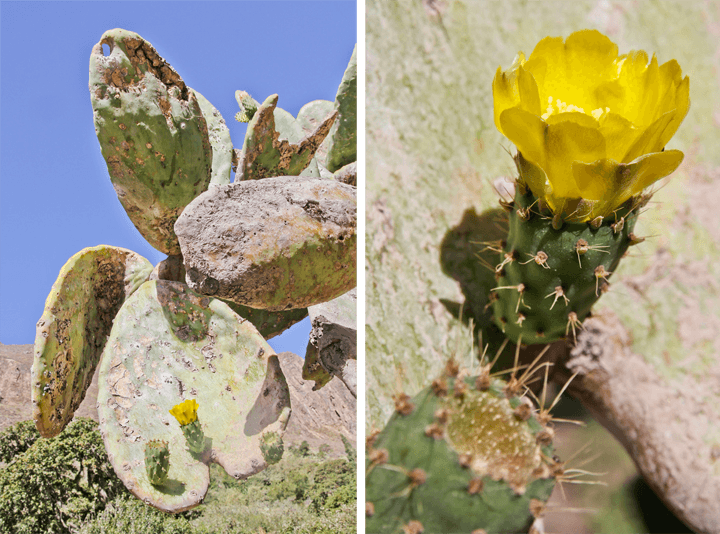 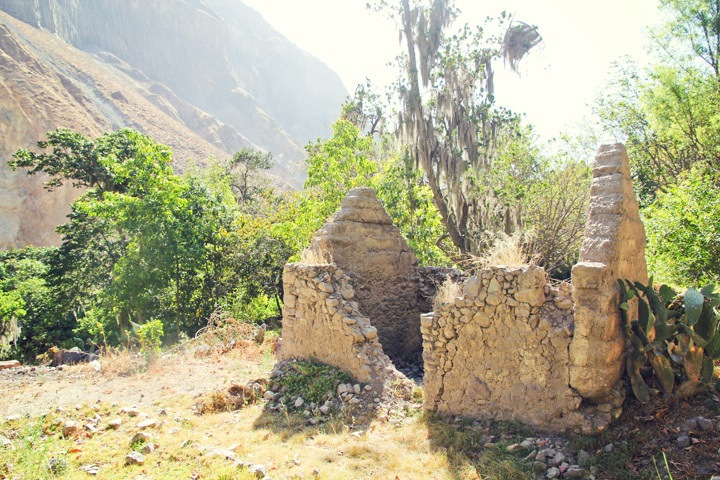 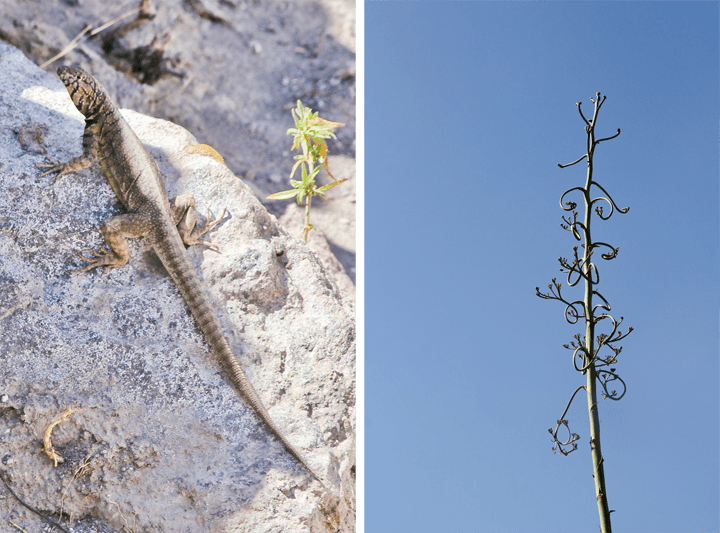 If you are hoping to take the same shortcut, immediately after the bridge stay left and take the very steep incline up the hill. You’ll pass beautiful cacti, small ruins and scampering lizards. Fair warning: you’ll also pass some shockingly steep drop offs. This is not a trek for the heights-fearing among us. It took us three and a half hours to reach San Juan de Chuccho, just a hair under the four hours our map had estimated. In San Juan we bought some cold drinks and asked locals to point us in the direction of Cosñirhua, rather than Tapay — the shortcut that would hypothetically save us two hours of hiking time, though it was a more challenging route. They directed us to stick along the trail parallel to the river until we turned up and away from it, following a small stream. From there, we walked along a ridge that led us to a bridge. 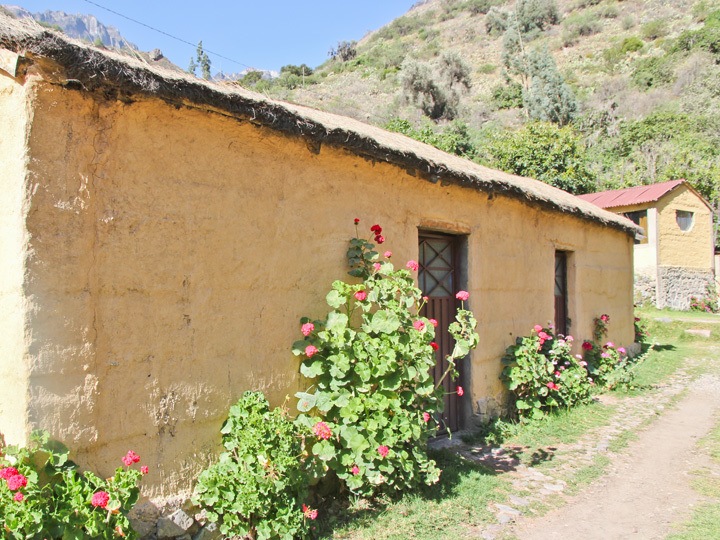 Across the bridge lay the biggest challenge of the day — an intensely vertical forty minute ascent. This is where I started to die a little bit inside and didn’t think I could make it. When I finally got to the top I literally flopped into the horizontal position and closed my eyes while Leah cheerfully informed me that we had reached Cosñirhua — and within the predicted hour time estimate. 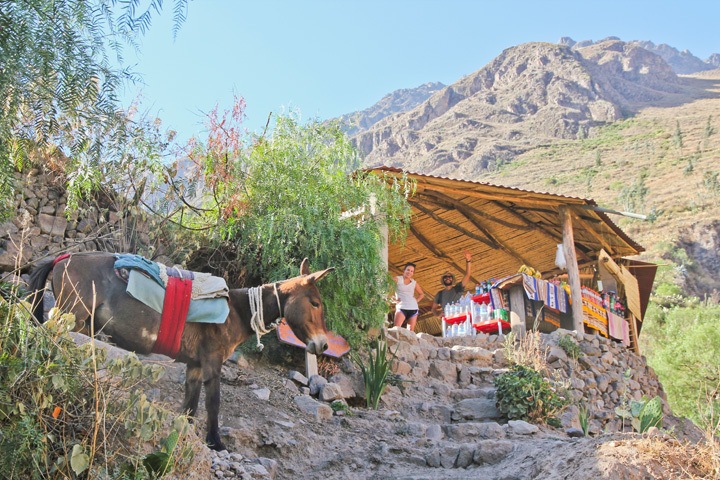 The next stretch was blessedly both short and flat, and we reached Malate in just a half hour. Here, we found a church, a pretty but simple Plaza del Armas, and evidence of connection to a road outside the canyon — there was a pickup truck parked in the town square!

These tiny towns were fascinating. Isolated from the outside world (well, aside from that pickup…) these Andean cultures function much as they did hundreds of years ago, dressing traditionally and using pre-Inca terrace farming methods. In a canyon twice as deep as the Grand one, time has stood still. 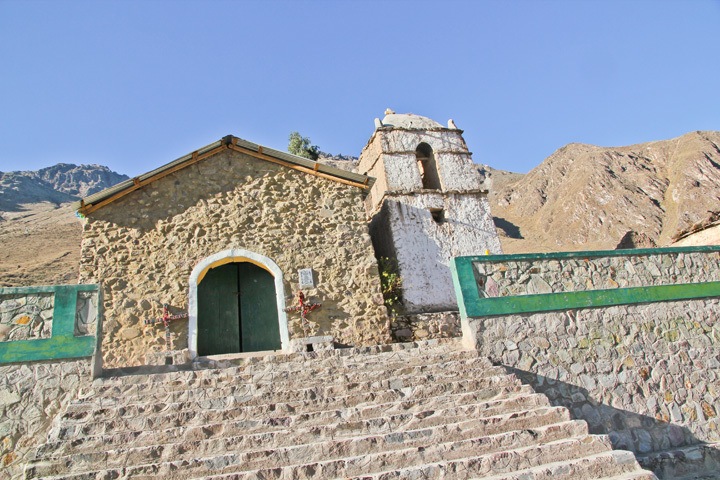 Leaving Malate, the map told us we had an hour and a half descent ahead of us to Sangalle. First, though we had a little problem — a landslide had collapsed the trail ahead of us. With no other humans in sight and no other options, we simply had to cross it.

Realistically, this was probably one of the most dangerous moments of my life in terms of actual, statistically probably risk of serious bodily harm. One wrong step on the loose earth and we would have gone plummeting down into the deep valley below. We crawled one at a time on all fours, leaning our center of gravity as close to the wall as we could. 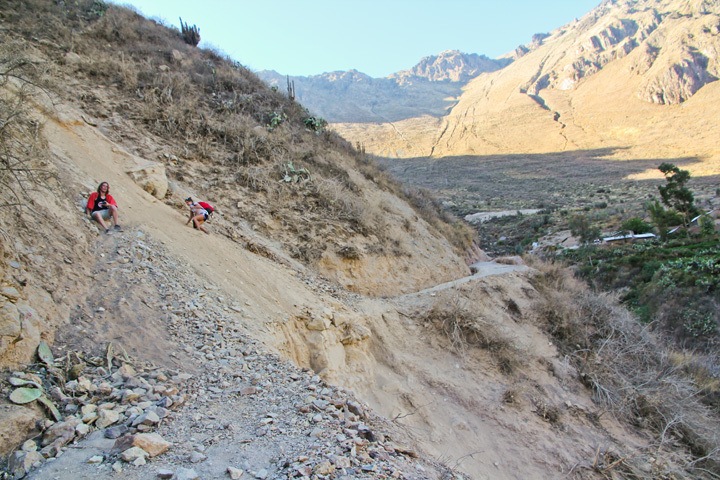 When we reached the other side, we laughed the nervous laughter of people who just could have just died. Perhaps it was the adrenaline rush, or perhaps it was the pressure of the setting sun, but we moved with an extra spring in our step after that. 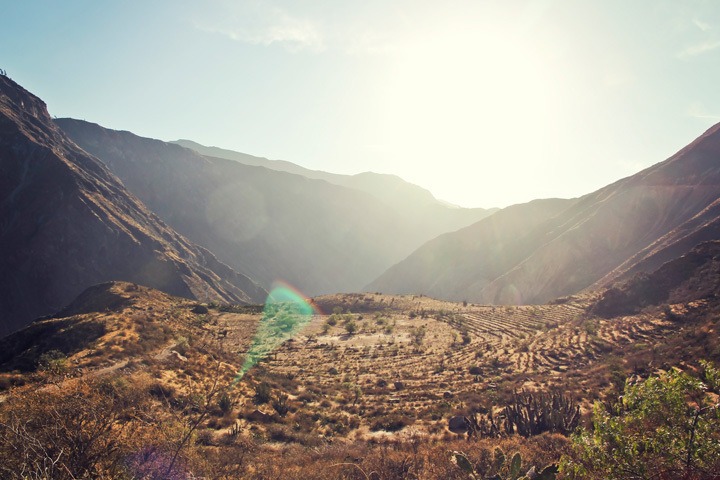 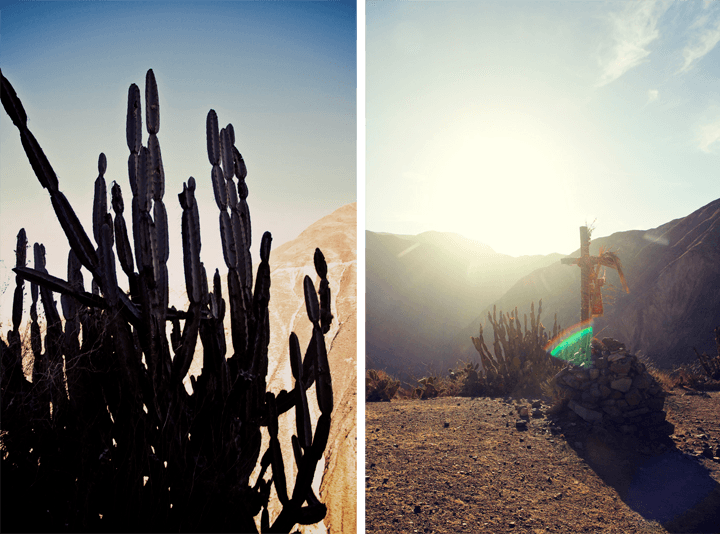 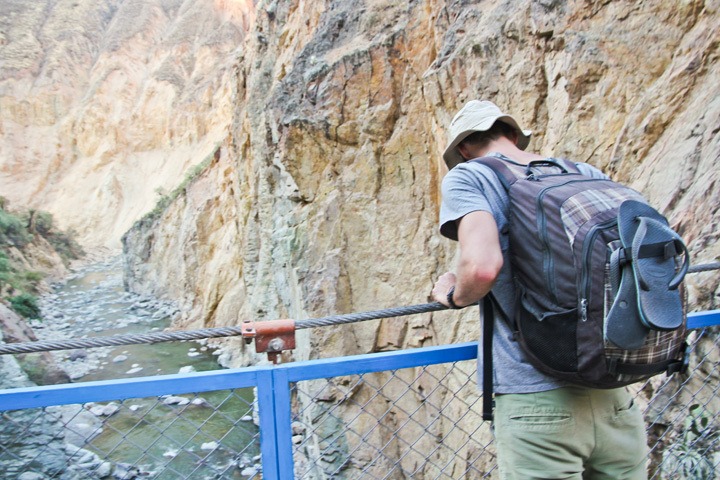 We arrived in Sangalle, also known as “The Oasis,” in just forty five minutes. The entire loop had taken us under six hours — not a bad show for this haphazard crew of hikers!

The Oasis truly was an oasis — a lush green platform at the bottom of the canyon, dotted by bright blue pools. As we walked around, mouths agape at the Eden we had found, we ran into our old friend Frenchie from the day before. The look of shock on her face assured me that she didn’t ever expect us to make it to the bottom of that canyon. We settled into an incredibly basic guesthouse and spent the evening watching the sunset, feasting on something blessedly other than granola bars, and marveling at our surroundings. However, something was nagging at the back of my mind: tomorrow, we’d have to go up. My struggle during the 40 minute uphill section of that day did not bode well for four hours of straight ascent out of the canyon.

When I voiced my apprehension, Dave quickly put in a vote for renting mules, and Gus quickly agreed. Leah, being an amazing bionic woman and also on a budget, said she’s rather hike. We bargained a price for the mules and headed to bed. 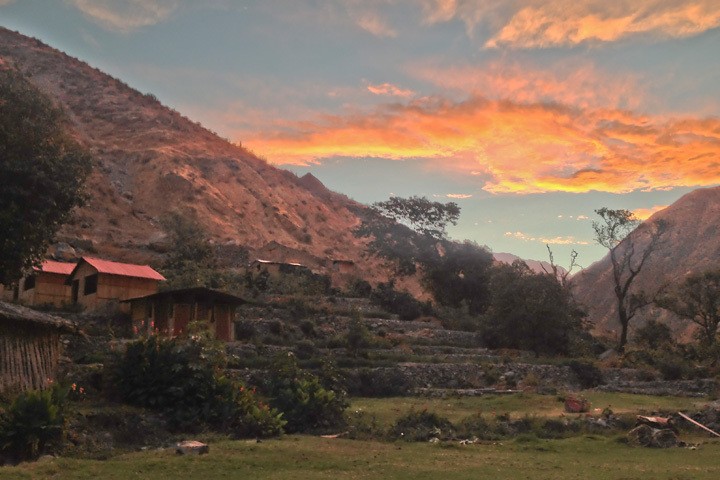 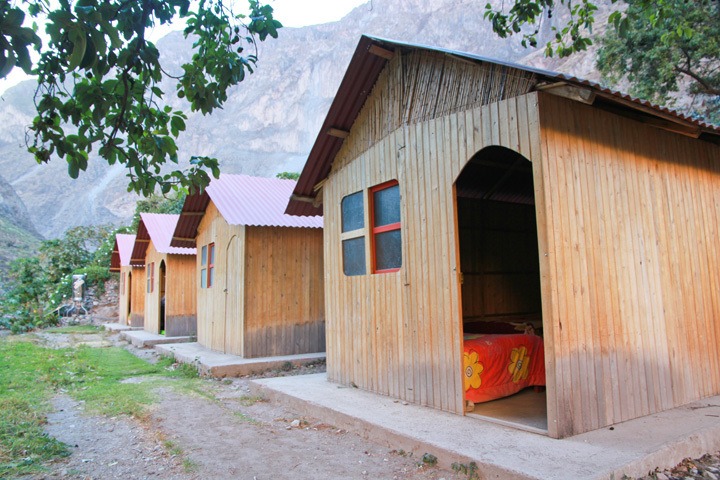 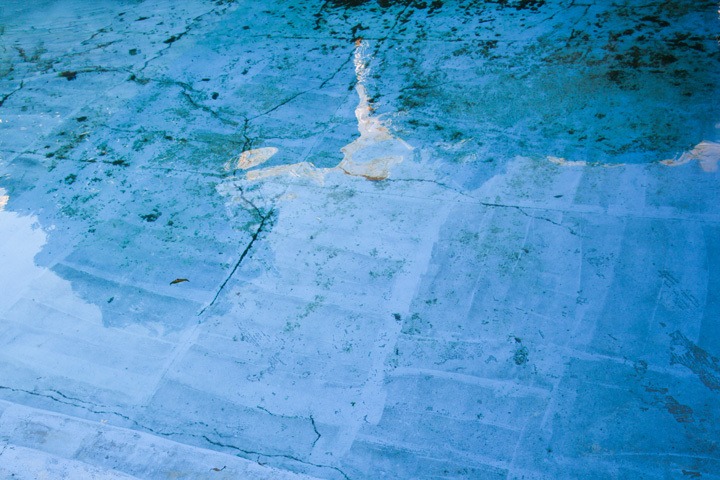 The problem was, I couldn’t sleep. I felt incredibly guilty about using the mules to get out of the canyon but was torn between my conscience and the fact that I truly didn’t know if I could make it on my own steam. Uphill hiking is torture for me and this would be four relentless, dusty hours of it. I wanted to cry.

The next morning I confessed my inner conflict to Dave, who made me laugh when I weighed up our own suffering versus that of the mules with the conclusion, “But, I can feel my own pain…” 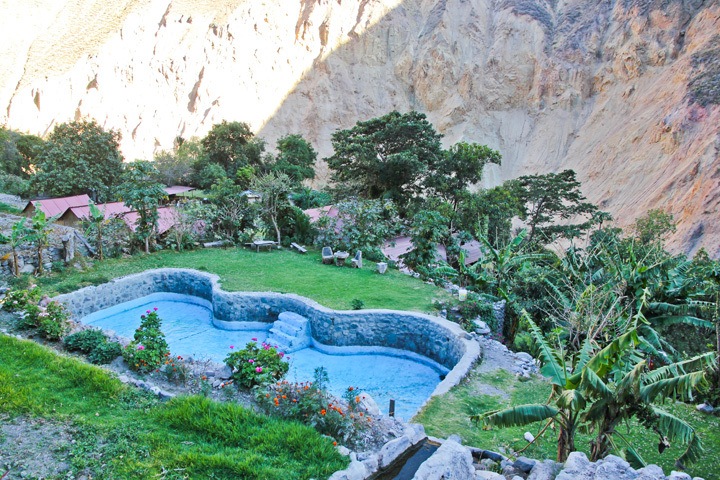 As we waved goodbye to Sangalle, karma came to kick me in the face. My water bottle fell out of my backpack and, like a complete idiot, I got off the mule to grab it — it was a refillable bottle, and it was my only water! — and watched as the mule pranced up the hill ahead of me. Thirty minutes later, when I finally caught up to the mule and its irate handler, red-faced and ready to collapse, I knew I had made the right decision. I didn’t feel good about it, but I can’t really regret it, either.

The next hour went by slowly, the only excitement being the occasional near-heart attack when the mule veered too close to the edge of the narrow path. Otherwise, I had a whole lot of time to feel lazy and guilty and reflect on the suffering of the mule, then reflect on the fact that I had not reflected much on the suffering of the human porters on the Inca Trail, and then reflect on what might be wrong with me that I have more compassion for animals than humans, and then reflect on why I’m anti-elephant riding but I love horseback riding so actually what the heck is going on here? Basically, be warned — riding a mule out of the Colca Canyon will give you endless amounts of time to reflect on your failings as a traveler, a blogger, and a human. 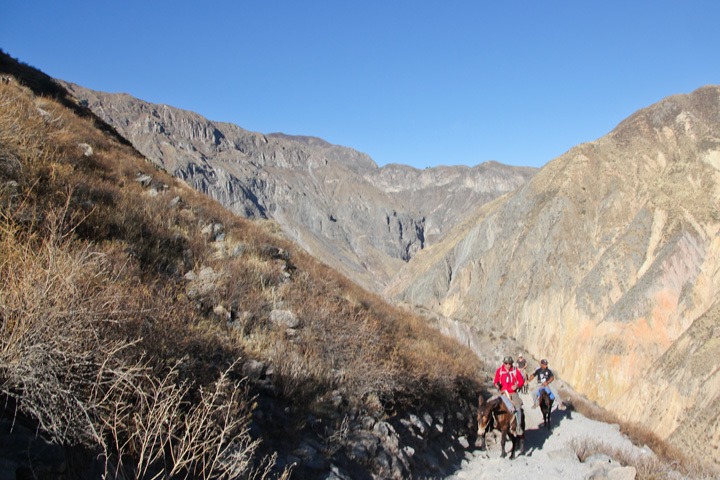 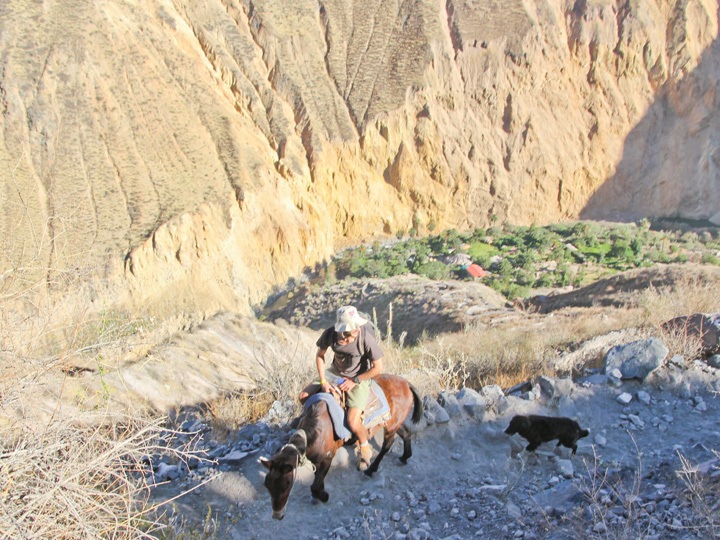 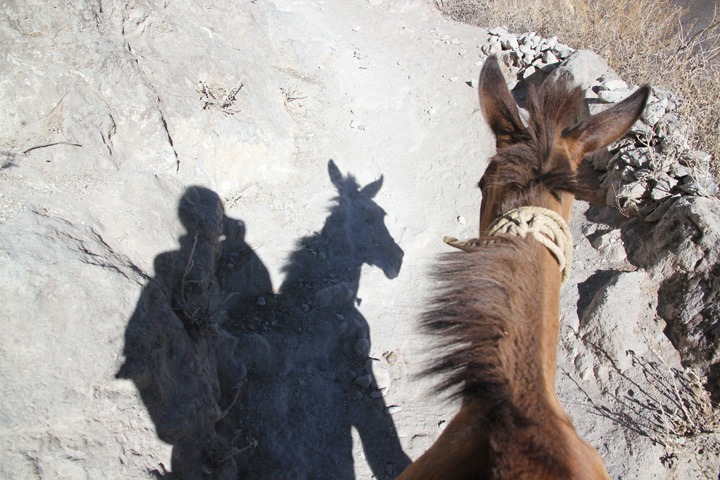 We arrived back in Cabonaconde with time to spare before our bus ride back to Arequipa — after the previous day’s disasters, we made sure of it. I gave my mule a big snuggle and promised it I would start hitting the gym again — as soon as I was back down at sea level.

I came to the Colca Canyon looking for adventure, and I left feeling re-energized by the spades of it that I found there. Looking for some adrenaline on your South American adventure? Put on your trekking shoes — and double check the bus schedules before you go.

Would you trek into the Colca Canyon? Would you hire a mule on the way out? And most importantly, should I burn that visor like my trekking companions made me promise to?