Well hello again, humans. It’s been over a year since my last guest dlog (a blog by a dog, get with the program), and I’ve got to say, I’ve been none too happy to be silenced. My busy life in Los Angeles has been absolutely brimming with potential for interesting posts — When Mailwomen Attack; Times John and I Drove to the Dry Cleaners; Sitting On The Front Deck Lounger vs. The Back Deck Lounger — these are just a few topics I’ve been workshopping.

So anyway, it’s high time mom finally put me back in front of the keyboard to share my perspective of her annual visit to fawn over me (I mean, why would anyone ever come to Los Angeles otherwise, right?) Everyone knows it’s the highlight of her year! But she’s not the only one who travels — previous dispatches of Tucker’s Tails have covered my entourage and I traveling to San Diego, Martha’s Vineyard, and Philadelphia. 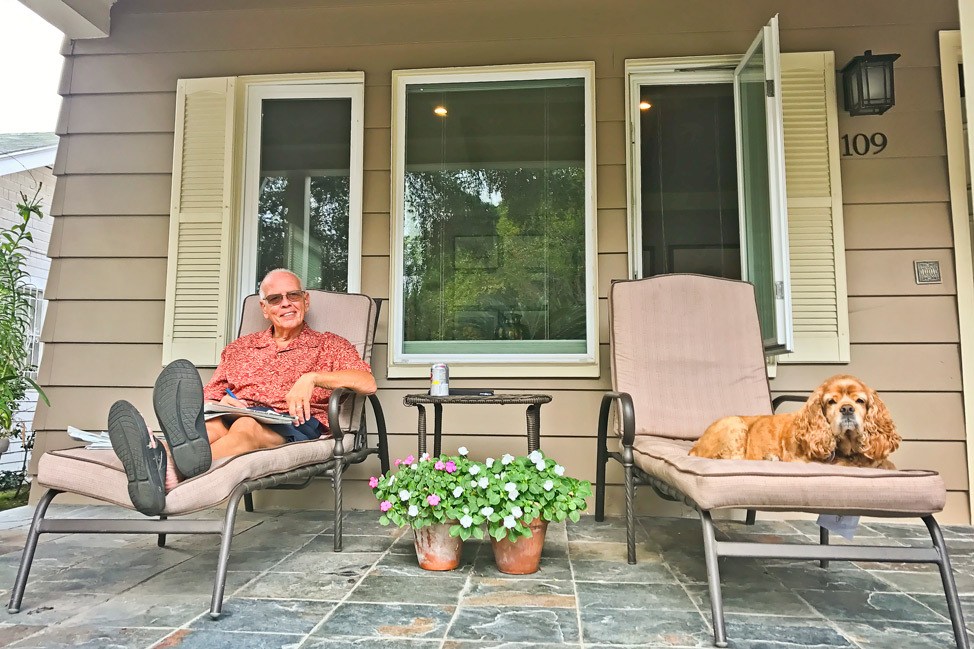 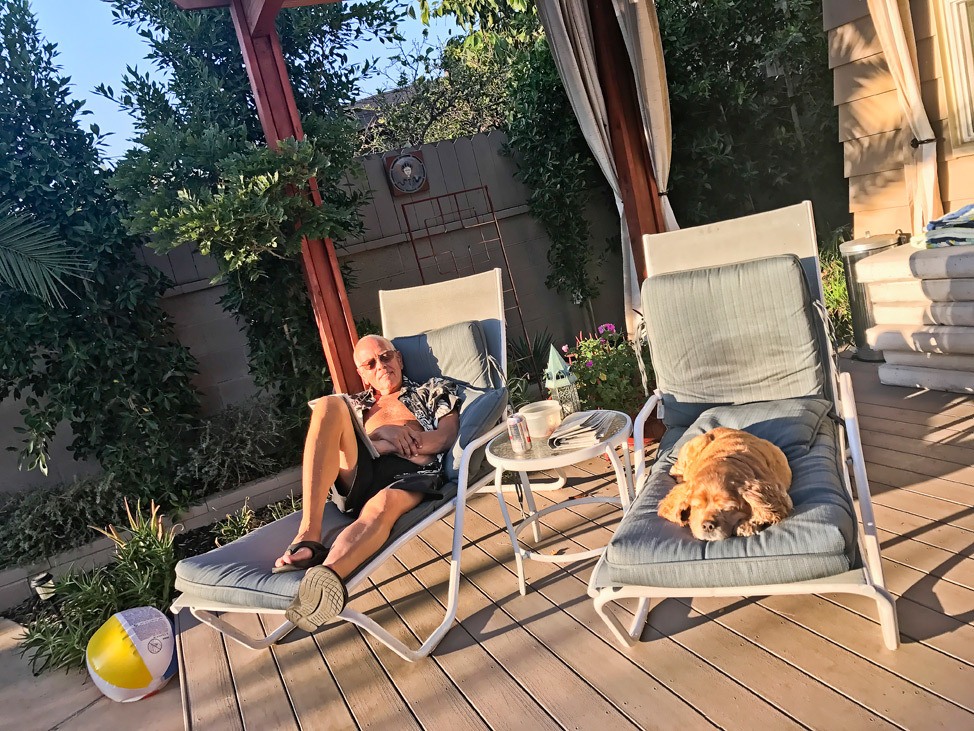 It’s true that I am a senior dog now, which means that in some circles — the local squirrel population on our street, in particular — I am finally commanding the respect that I have long deserved. It also means that while I’m as healthy as a horse, as they say, (bunch of oversized wanna-be dogs, is what I say, am I right?!), I do have have to have more regular check-ups than I once did. 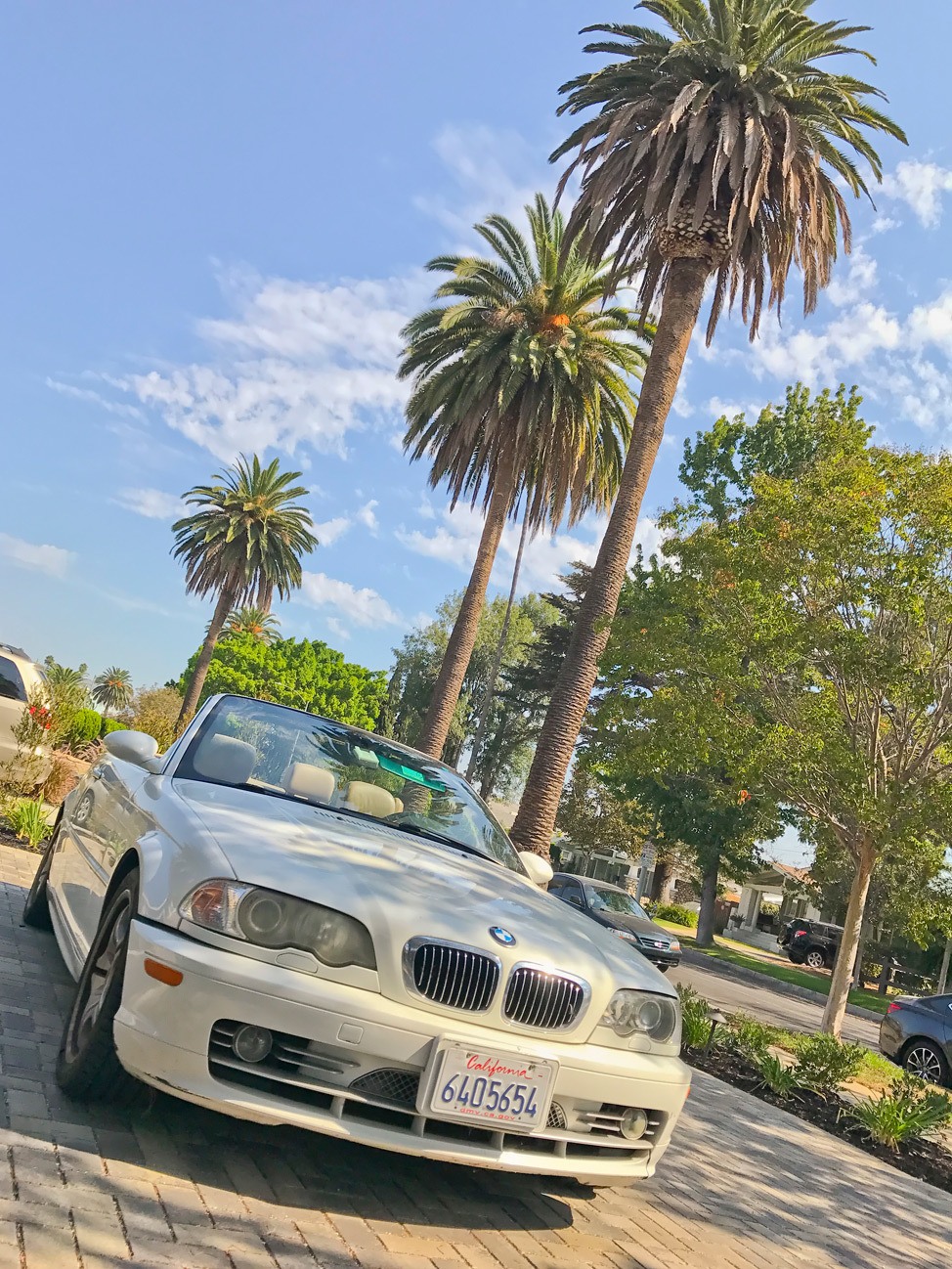 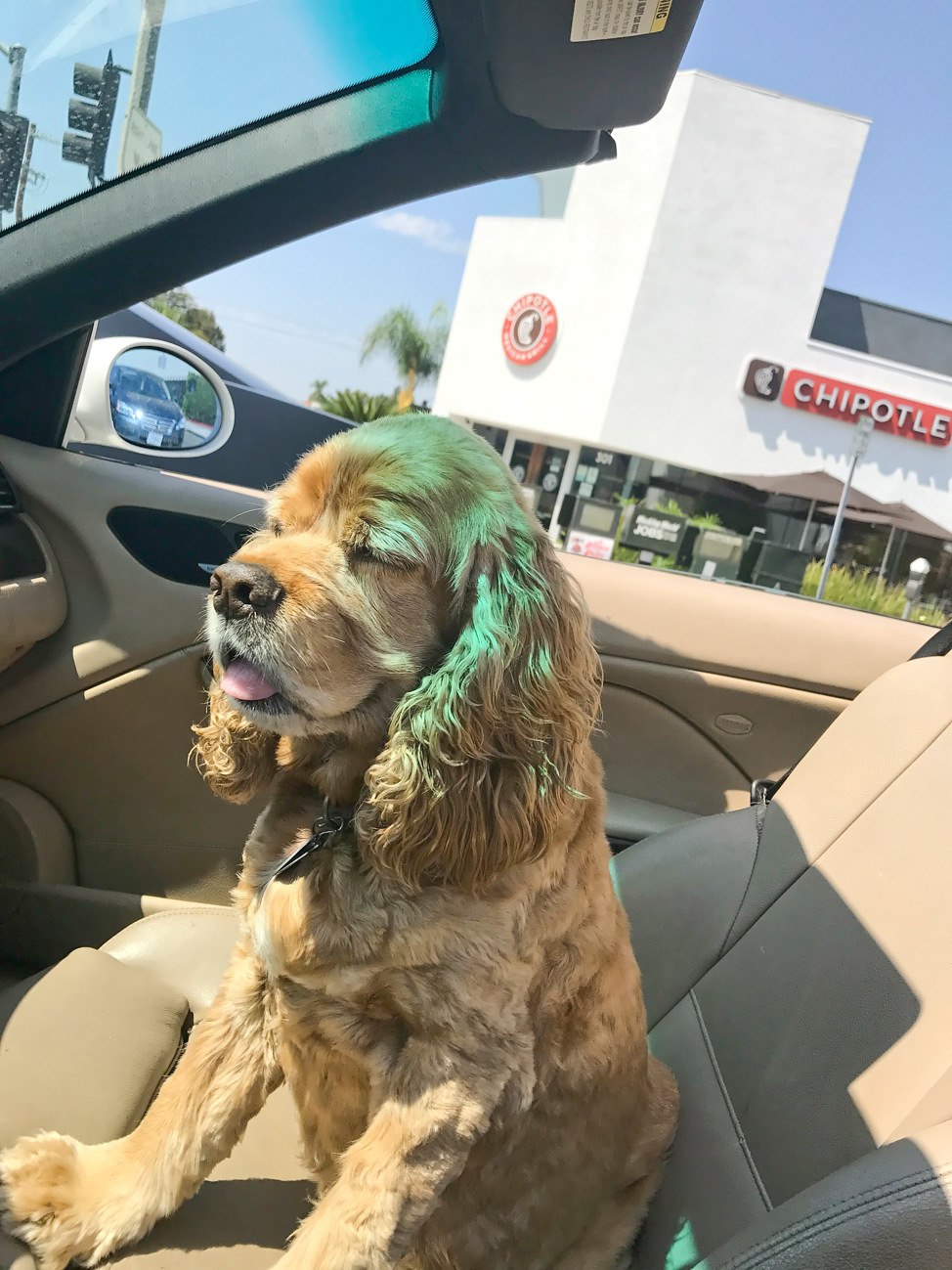 One such recent appointment during mom’s visit was, in fact, a borderline dognapping. And I’m not talking about the fun kind of naps. I just hopped in the car, thinking we were casually driving to Chipotle — it’s a pretty safe bet when mom’s at the wheel — but no. We went to the veterinarian’s office.

And I stayed there ALL DAY under anesthesia. With no food, if you can even begin to imagine the horror. Later, I woke up with pretty clean teeth and a few skin lesions lighter, but I was hangry. Mom’s face was a mix of relief and horror when she saw the number of stitches I was covered in, but I was pretty at peace with the situation — while I figured the amount of random humans who compared me to a stuffed animal on the daily may ebb slightly, I also assumed this would buy me a lot of sympathy treats. 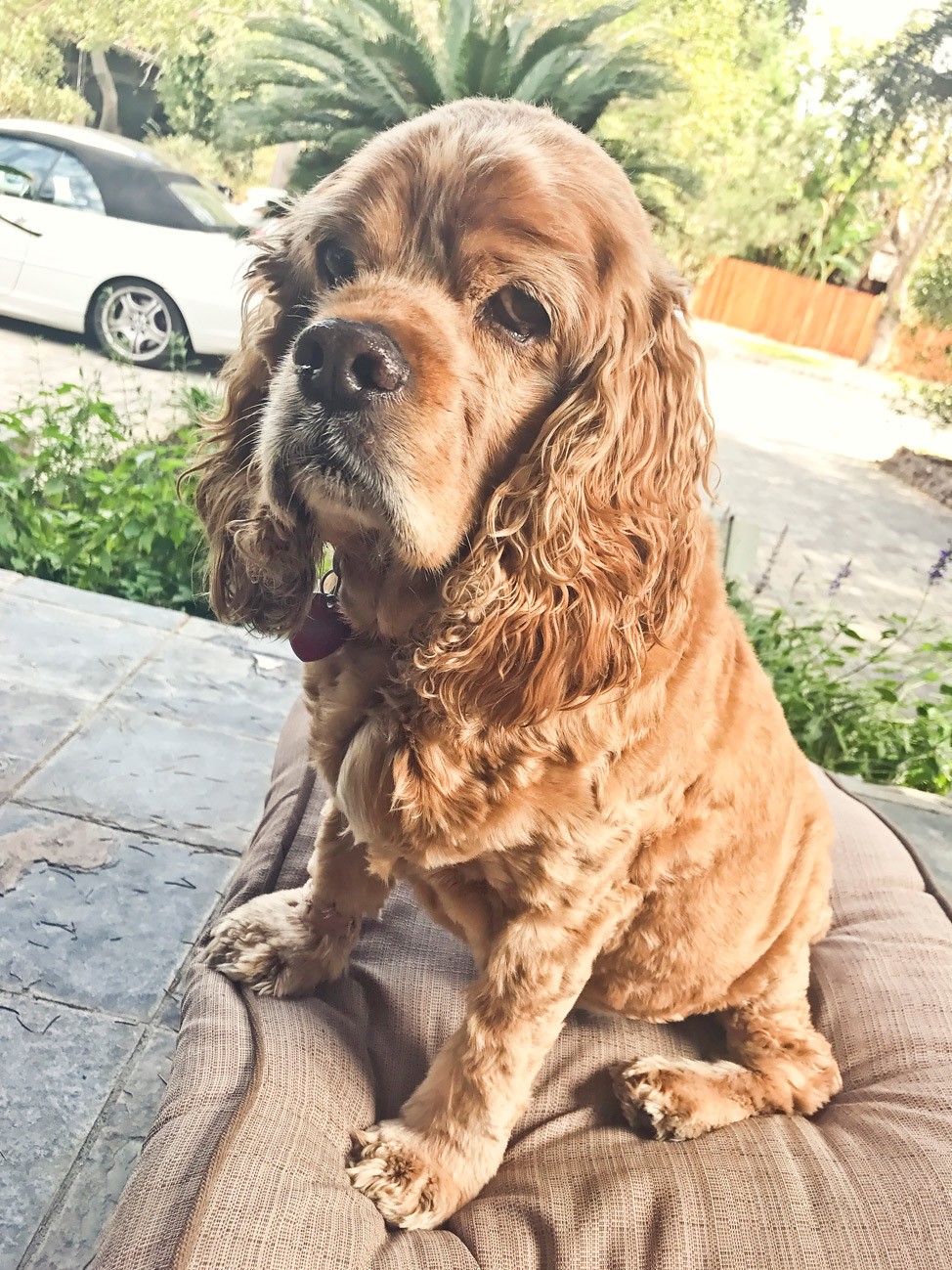 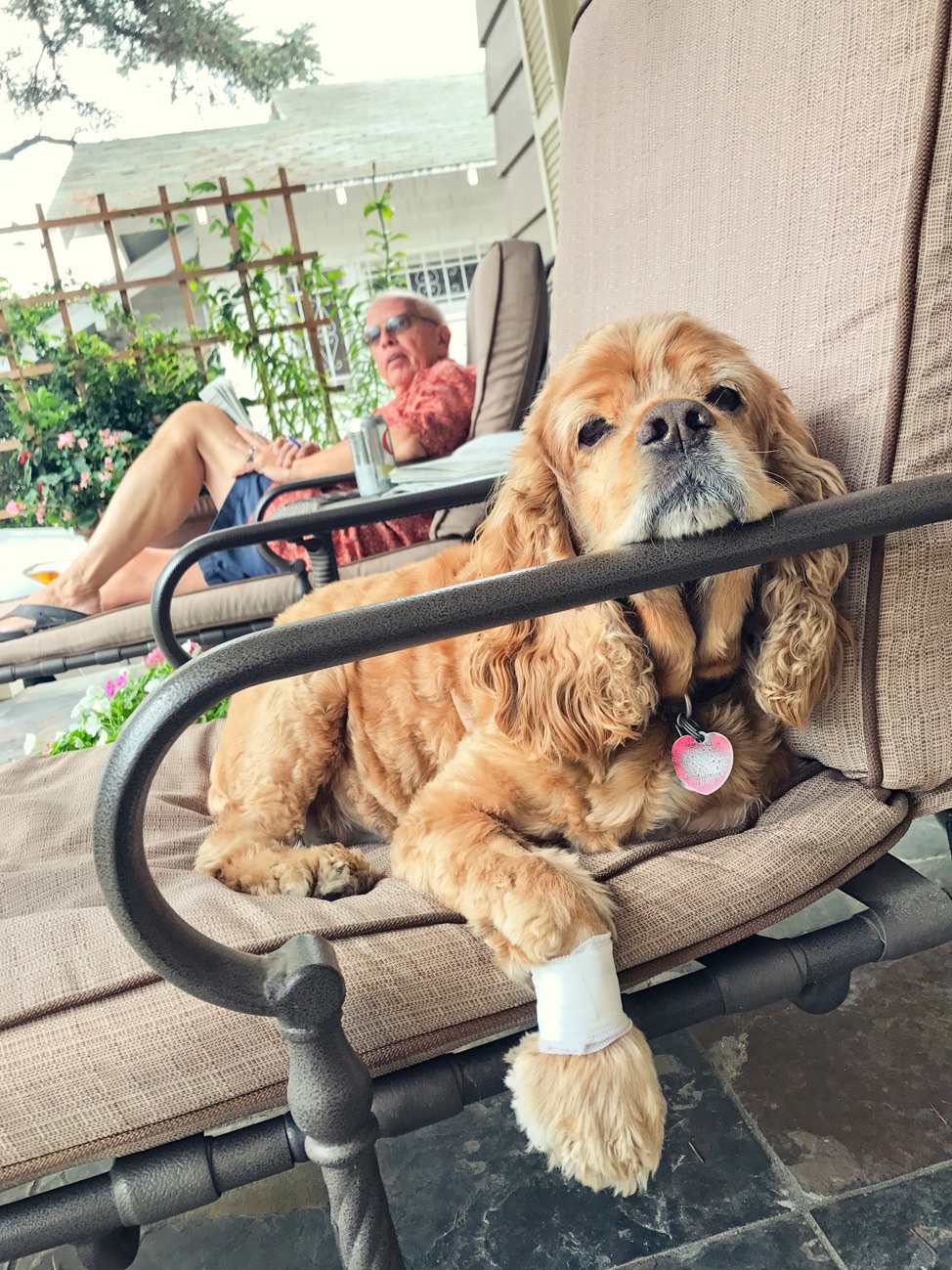 Except I was kind of mad because Mom kept telling me, “a hug can be a treat too!,” and chasing me around the house with her arms out. Um, no, treats come from a Barkbox and from pet stores and from when none of you are looking and I crawl up on the dining room table and snag a plate of turkey, ya dummies! 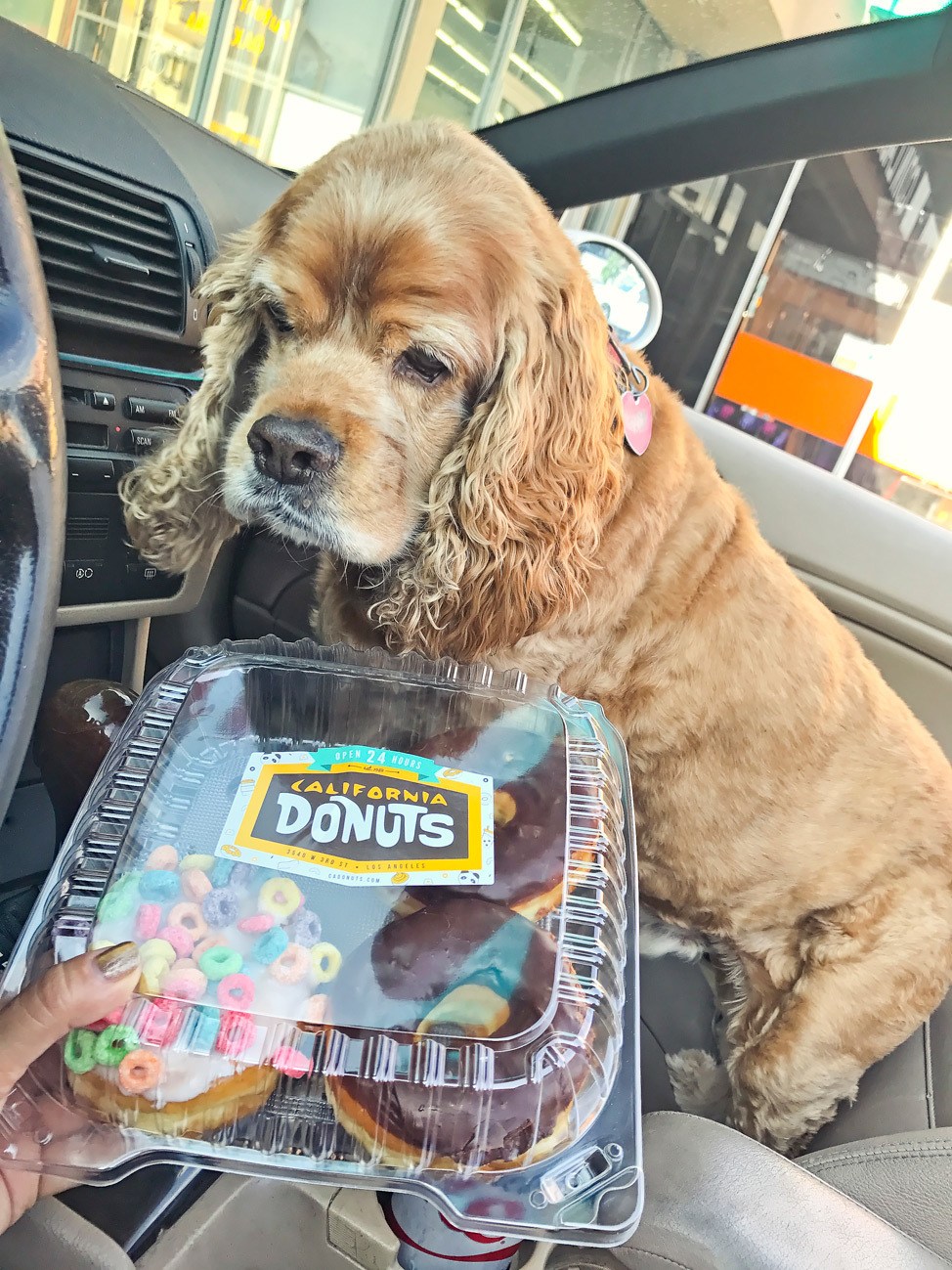 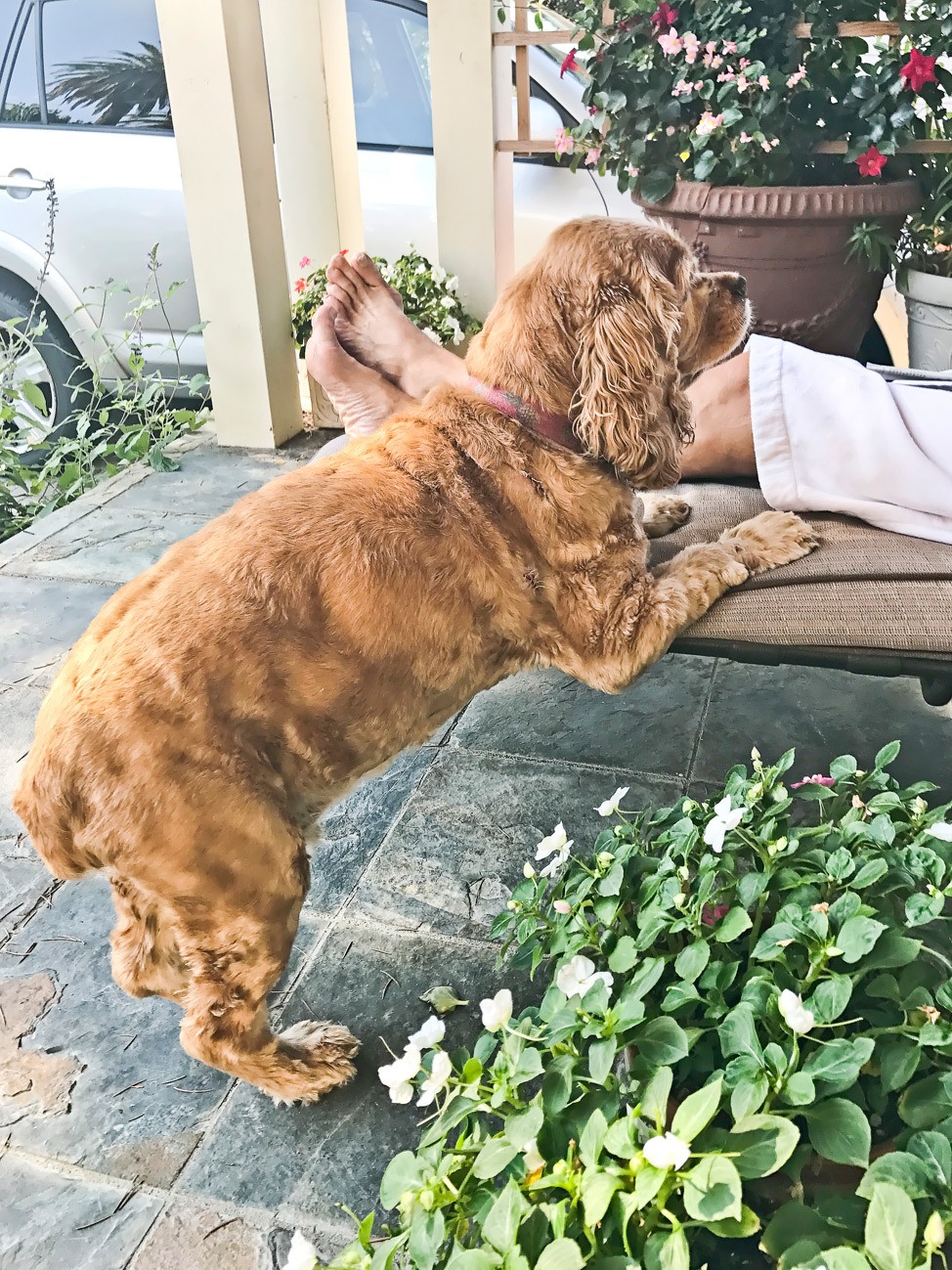 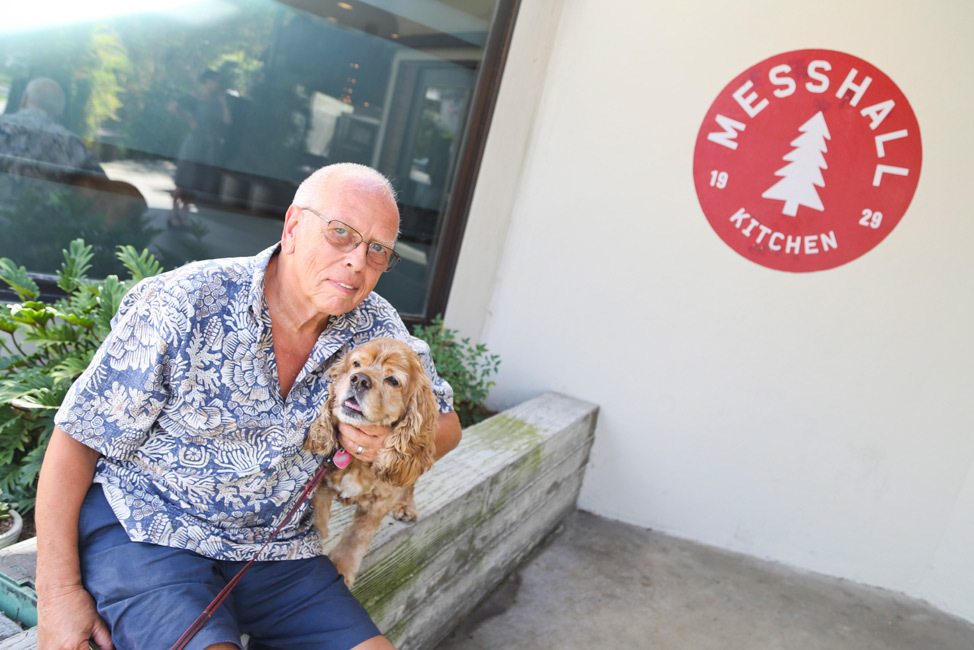 So anyway, I was like, no lady, I require real treats. And I communicated this by standing with my nose touching the treat drawer and refusing to budge until it was opened by some whatever sap who I managed to convince I was starving. Ha! Fools.

My wounds did defer a lot of mom’s plans for the week, like taking me to a dog beach, but I told her to save them for next time, when she finally takes me on that dog-friendly Santa Barbara trip she’s been yapping about for years. This time, while we checked out a new dog park and ran many errands and went to a Tucker-friendly brunch, we mostly just stayed at home where my humans could freely discuss my cuteness in private.

Despite my worldly dog travels, it’s just where I like to be these days. Between opening my Barkboxes, surveying the neighborhood from the futon John puts in front of the window for me, informing every person who enters the house that I’ve been starved by cruel captors, and fending off the unwanted hugs of the humans that serve me, I kind of have a lot going on. 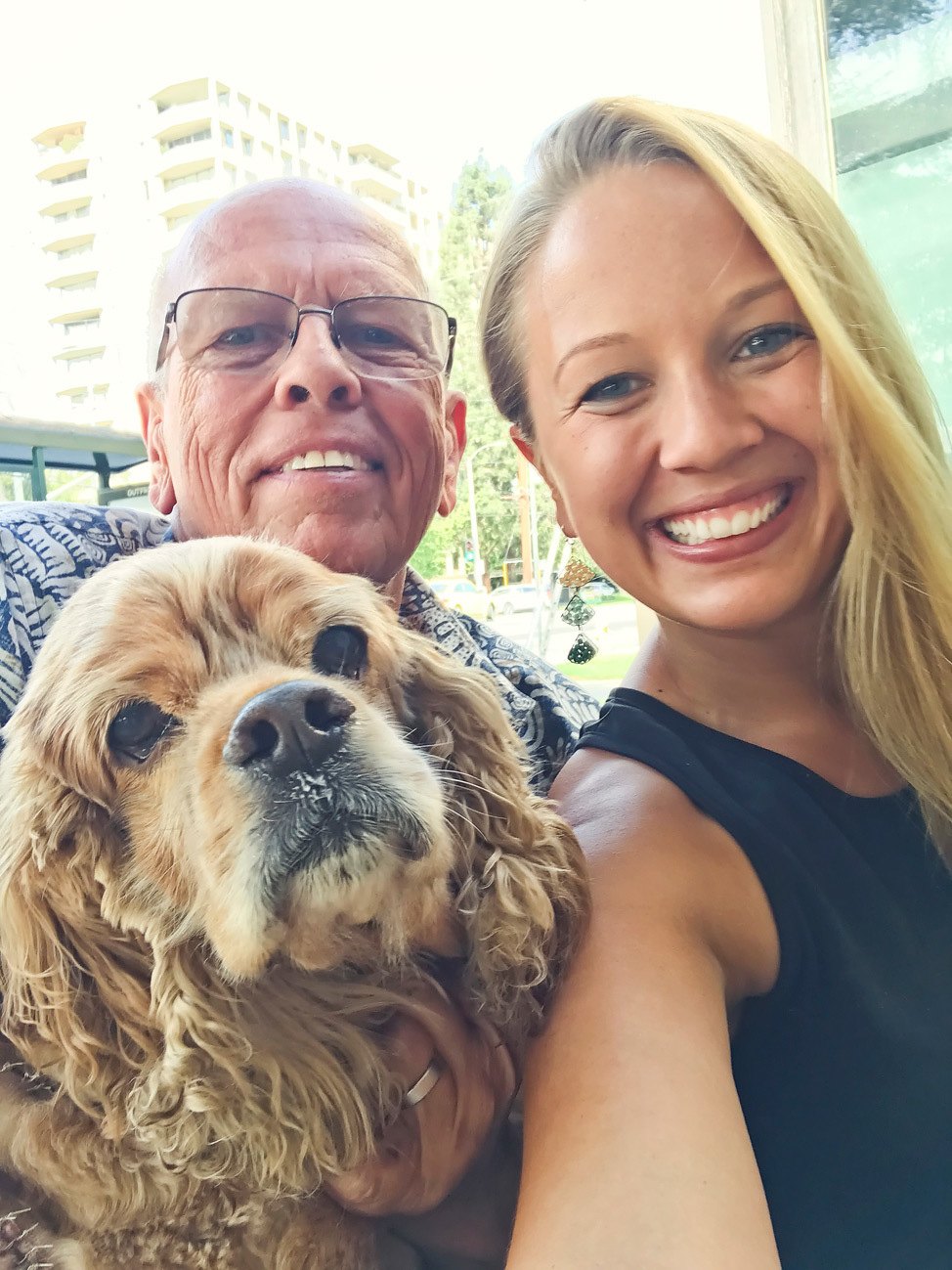 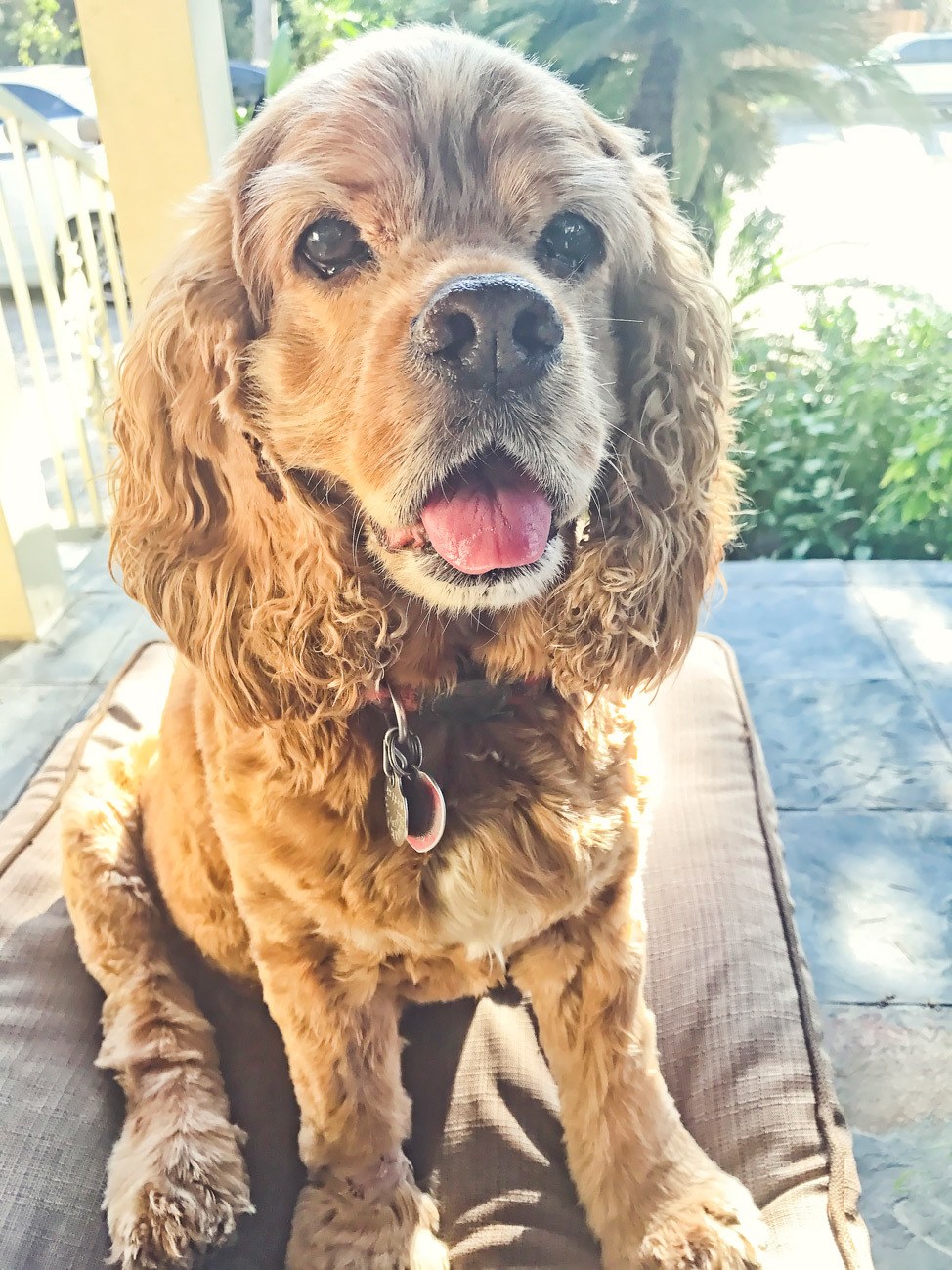 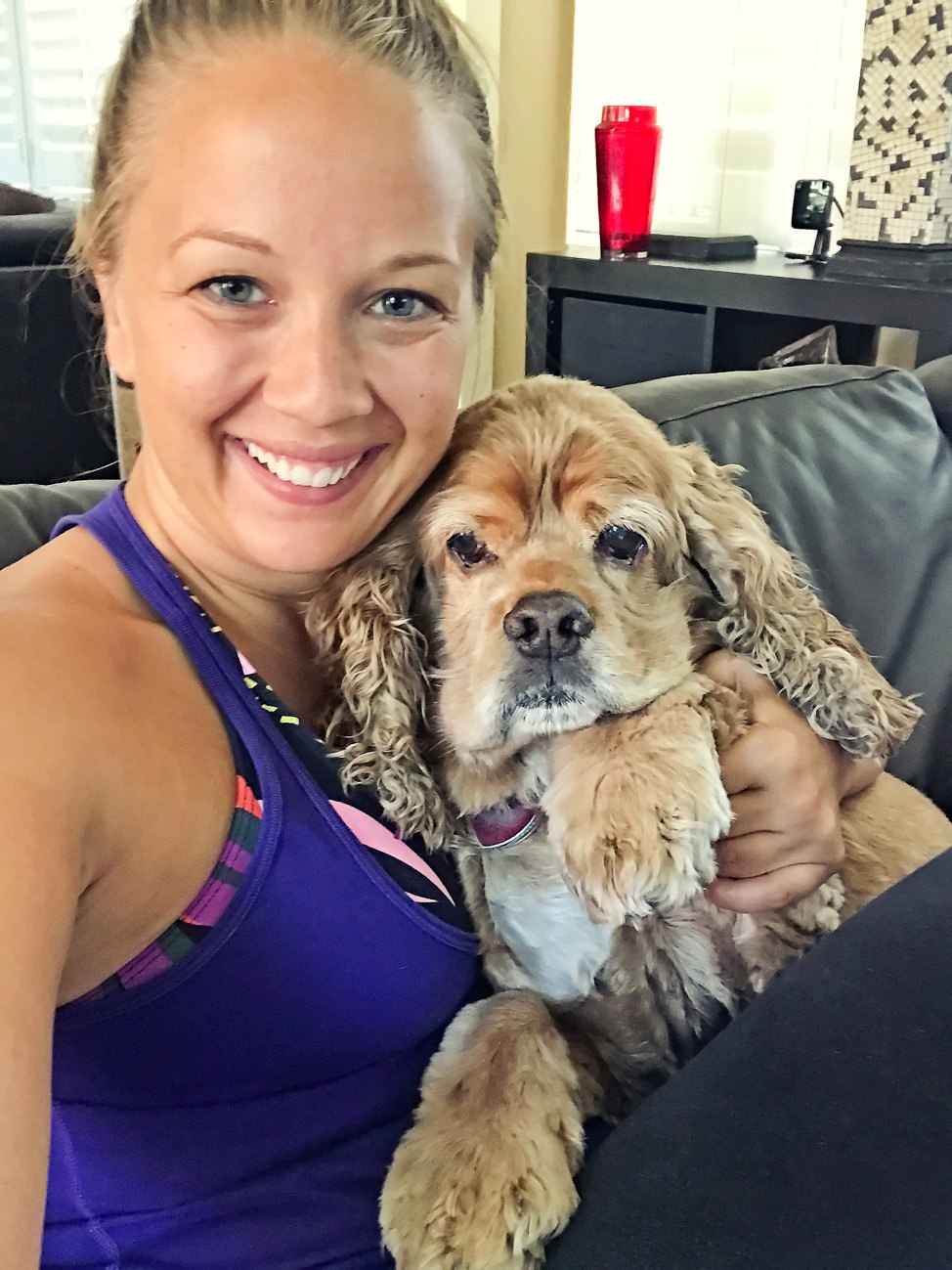 Perhaps my next dlog will be from Santa Barbara. Perhaps it will be from Big Bear Lake. Who knows? It might just be from the top of the dining room table. There are always the best treats up there.

Till next time,
Tucker

Jawsfest! A Festival of Cinema and Sea

Photo of the Week 218: Martha’s Vineyard

Christmas in the Capital Region