Once we settled into our plush digs, we decided to explore the city in the same way I had explored London earlier in the summer- by bus and by boat.

Istanbul is broken in to three major districts, all divided by water. Our hotel was in Cihangir, which is in the Beyoglu district, known for its trendy art scene and nightlife. Sultanahmet is the major historical district, which is therefore also the most touristy. And then across the Bosphorus lies the Asia side, making Istanbul the only city in the world to straddle two continents. As we did in Greece, and I did in Glasgow, Edinburgh, and London (seriously, these people should be paying me!) we hopped on a City Sightseeing Bus to get a better feel for the layout and districts of the city. 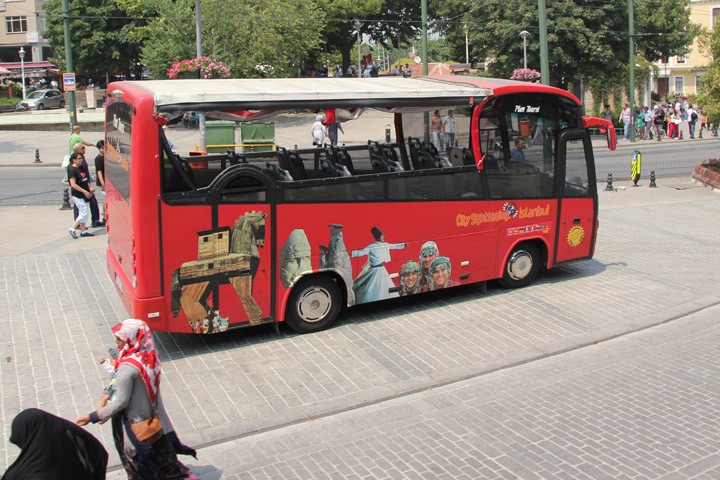 As a result of wedging itself between both the Asian and European continents, Istanbul has a fascinating and unique character. It has the architectural marvels, the sophisticated population and trendy cafes and boutiques of a major European city. But it also has the lean towards tradition, the emphasis on family and most of all, the chaos of any Asian city I have ever been to. 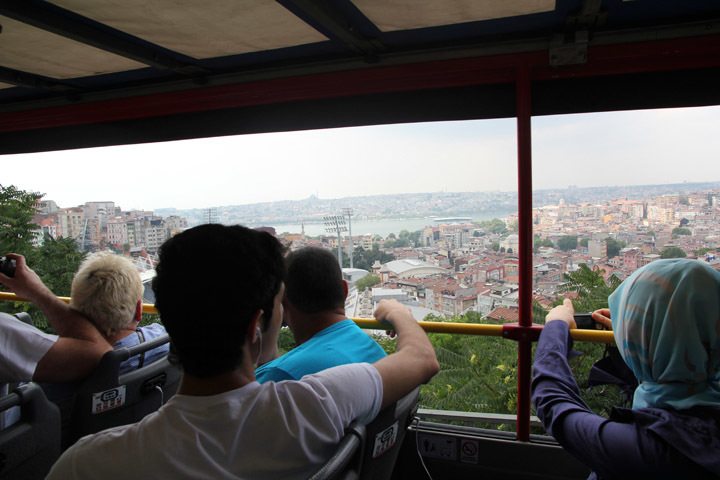 Unfortunately, the day was overcast and gray, which are not two of the best conditions under which to have a first impression of a place. We both made pretty snap judgments and agreed that while we were excited to be here we weren’t in love with the place. (And that’s the danger of snap judgments, as our tune would soon change…) 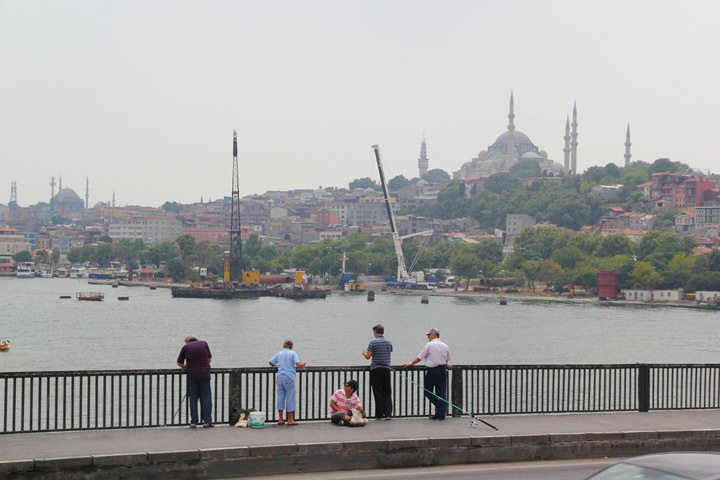 Even the simple hop-on, hop-off concept of the Citysightseeing tour that is executed quite matter of factly in many parts of the world was hilariously chaotic in Istanbul. Families made a big fuss coming on and off, and tourists haggled and complained and carried on with the ticket taker. It might sound like a nightmare to some, but its the kind of thing that made me fall in love with the developing world. I was happy to find it in a big developed city like Istanbul.

While it didn’t cross the Bosphorus into Asia, the tour took us to outskirts of the main tourist areas that we never would have laid eyes on otherwise. The contrast between the opulent architecture in some areas and the overcrowded urban areas in others was vast. 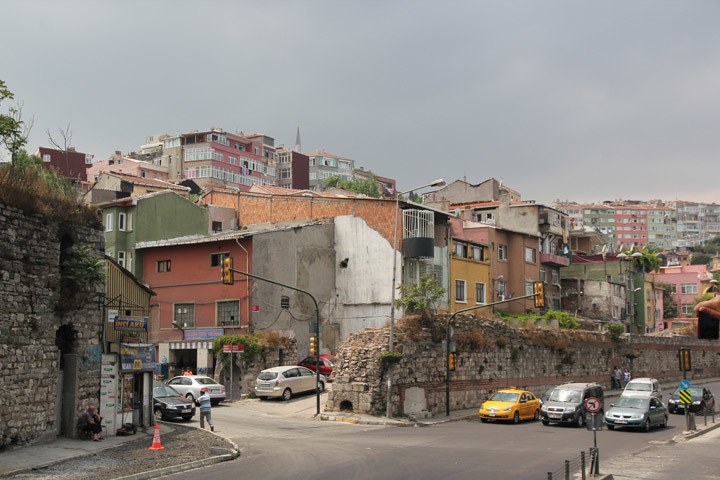 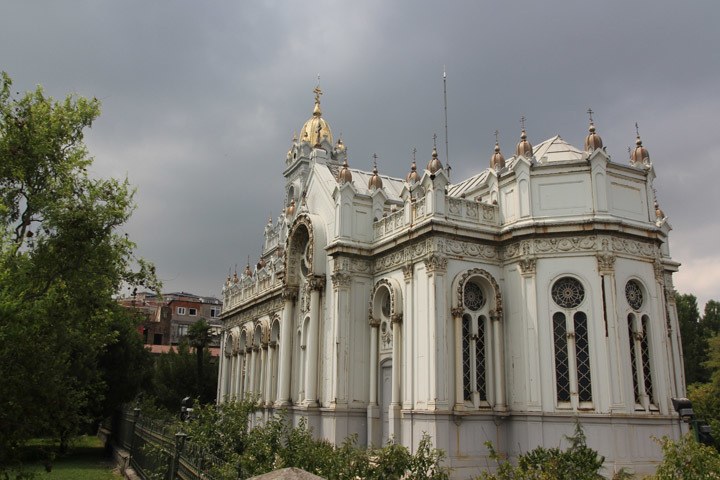 The highlight for us was seeing the Walls of Constantinople, which have surrounded Istanbul since it was, well… Constantinople. We wouldn’t have made a special trip to see otherwise, but it was quite interesting to drive along. 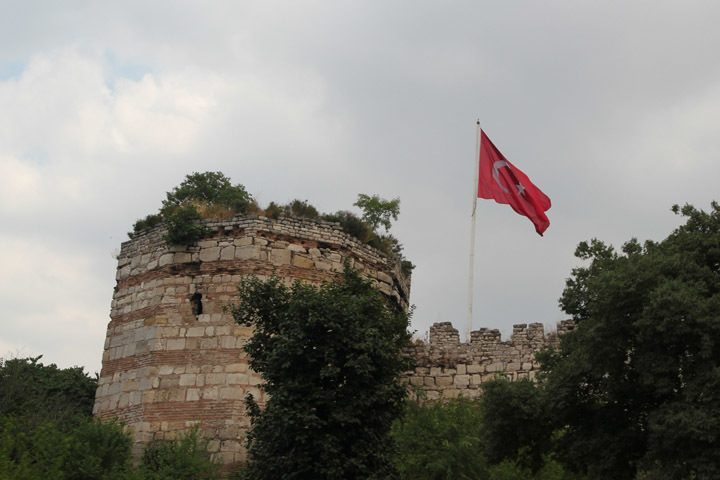 While it was a decent way to spend a few hours, this version of the City Sightseeing Tour was not up to the standards of the many others I have been on. Not to mention, the main and most interesting sights in Istanbul are so conveniently placed within walking distance, you don’t really take advantage of the whole “hop-on, hop-off” situation. 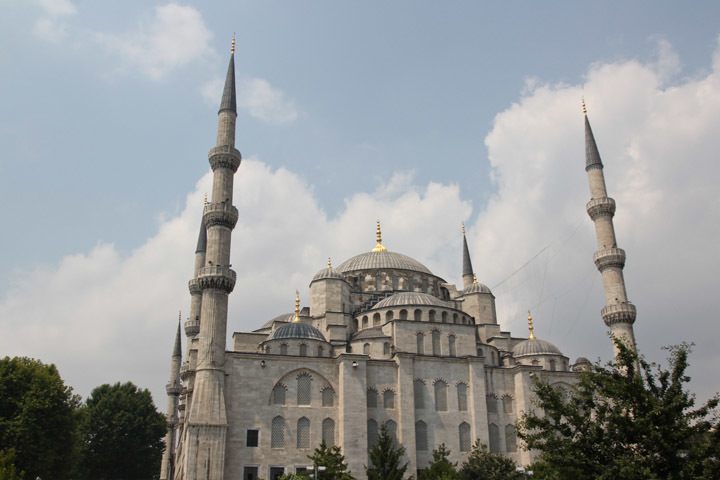 Jumping off the bus at the last stop, we went on to grab dinner under the Galata Bridge- an experience all in itself. Touts hopped out at us from each seemingly identical seafood restaurant, all vying for our business with warm welcomes to Istanbul, queries of where we were from, and the occasional marriage proposal. The smell of fish was overwhelming as locals dangled bait and lines from the bridge above. Delicious pandemonium. 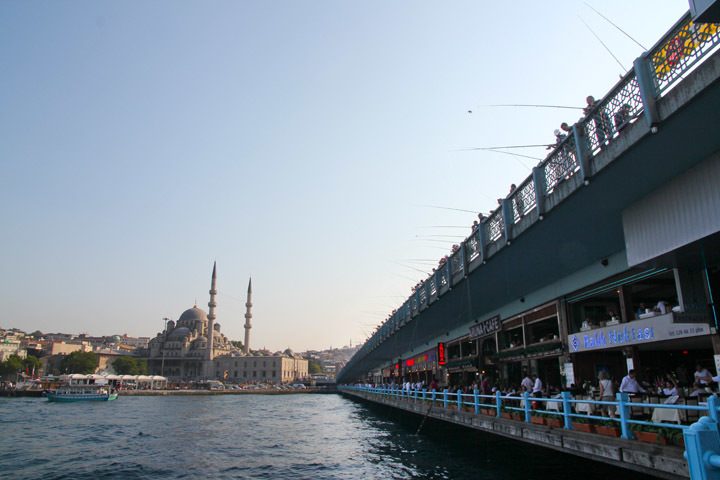 While munching away, we watched a young boy jump into the Bosphorus- seemingly on a dare. As the Bosphorus is far from meant for swimming, there are no ladders or stairs out of the water, and we watched helplessly as he struggled to crawl back up. Just as we were about to get slightly hysterical a burly man came over and lifted the boy with one hand before chiding the group in Turkish. Just another night in Istanbul. 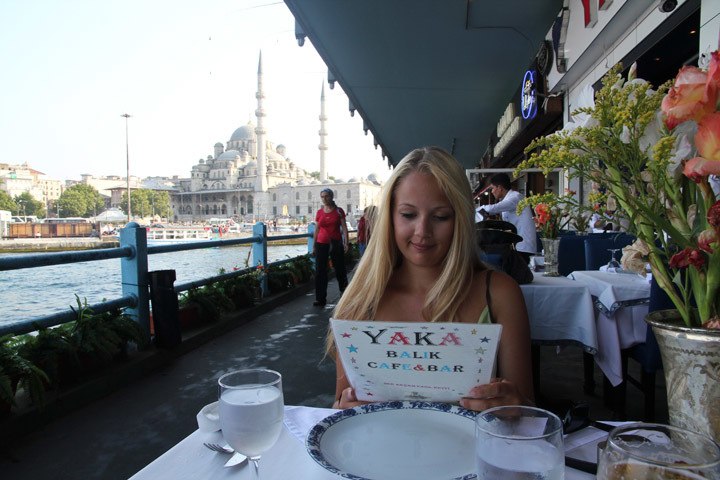 After exploring the city by bus, we decided to continue our day of passive tourism by hopping on a Bosphorus Cruise- one of the “must-do” Istanbul activities. Luckily, we had happened to arrive on a Saturday, the one day of the week that you can go on a sunset cruise. While our concerned concierge at the Witt had warned us that we would be “very bored” we forged ahead, throwing books in our bag should that become the case. We thought we’d have a nice and quiet, albeit touristy, evening cruising along the river. How wrong we were! 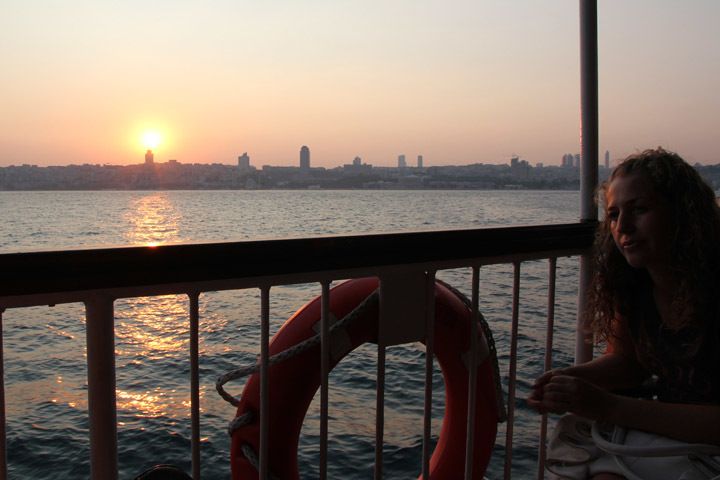 We forked over the entire 20 Lira ticket price (about 10USD) and boarded the boat. We quickly realized there would be no reading- we were shoulder to shoulder with hundreds of Turks, barely able to nab a seat on the hard wooden benches. 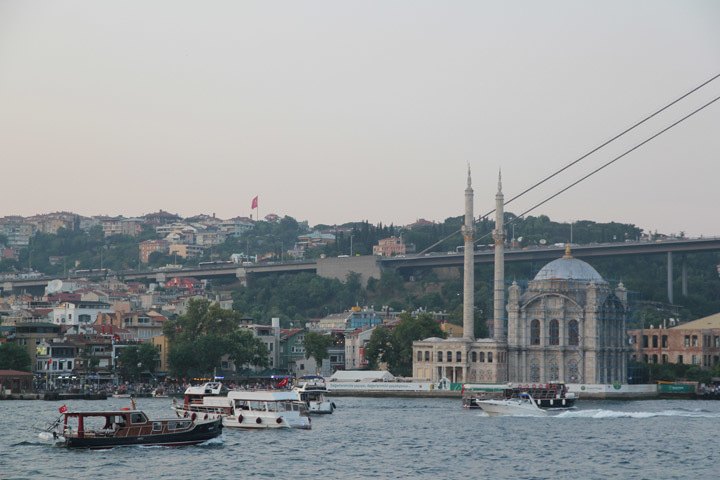 We wondered where all the other tourists were, and figured the boat must be used as a form of commute for locals that lived outside the city. We were surrounded by laughter, gossip in a language we couldn’t understand, and impromptu meals pulled from knapsacks. Outside our little slice of local life was the busiest waterway in the world, with passenger cruises, cargo ferries, and personal boats seeming to constantly just narrowly escape collision. 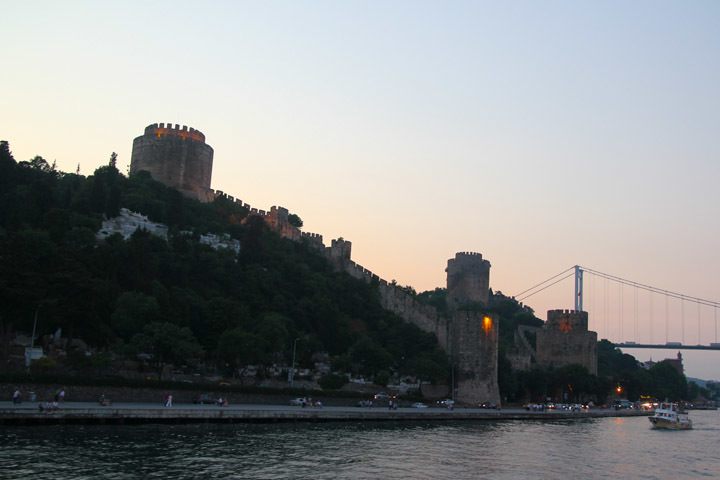 Each direction of the trip was listed at about 90 minutes, but took more like 2+ hours with the many stops. During the trip we hoped between Europe and Asia nearly 10 times! On the way we passed trendy floating nightclubs for wealthy young Istanbulites, grand bridges spanning two continents, and decaying castles. 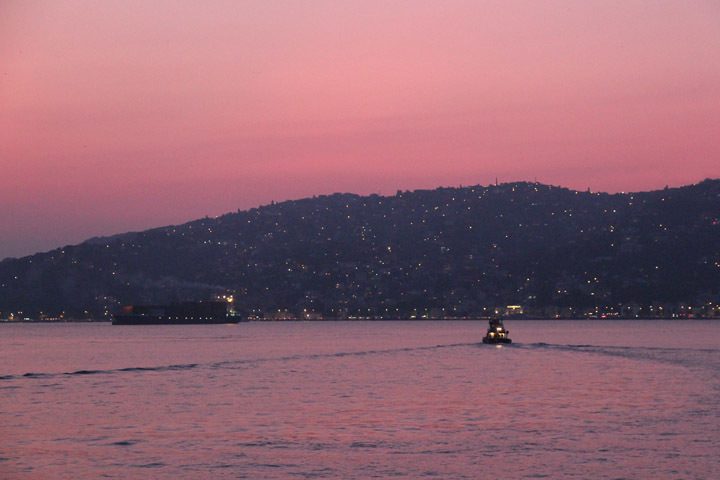 When dusk fell, the scenery was stunning. The lights of the sprawling metropolis set against the pink sky and magenta water was simply magic, no photoshop required. 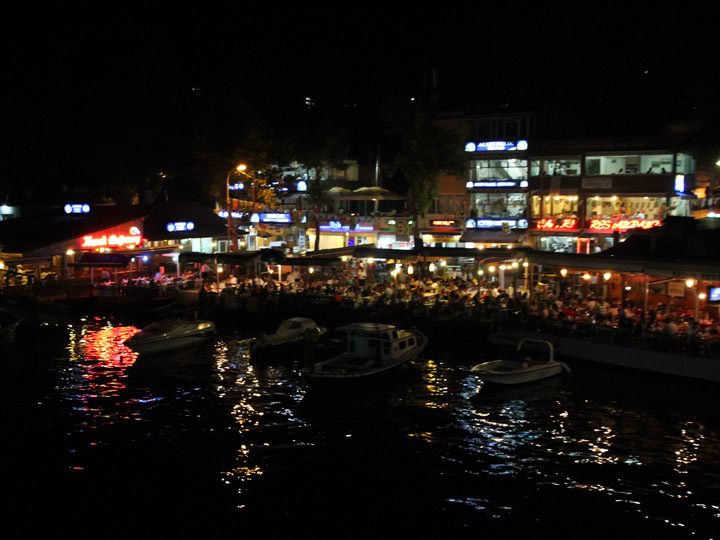 Finally we arrived at the final stop before the boat changed direction, Anadolu Kavağı. We knew there was a stop here, but we had no idea how long. Attempts to find out revealed that we were two of the only English speakers oboard. Finally we were able to discern we had one hour. 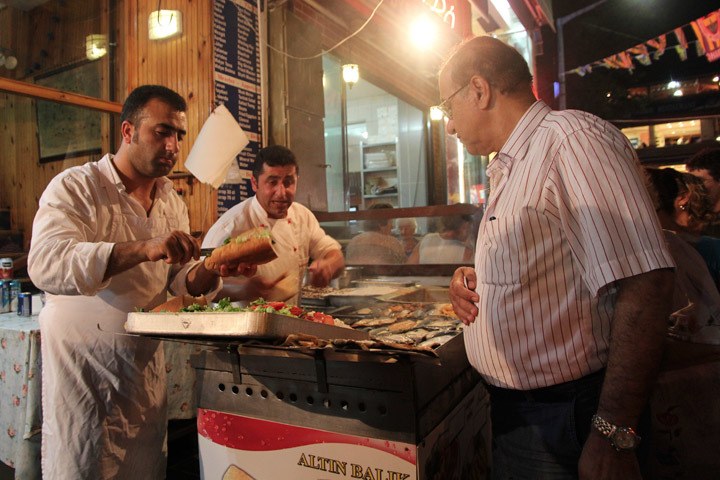 The normally quiet fishing village had come to life for our stop. The hundreds of disembarked passengers packed tightly into the small square, enjoying their fish sandwiches and ice cream cones. Unfortunately I found the ice cream to be very strange, confirming what little I have in common with the average Turkish palette. Walking around, I said to my mom that despite my travels in the Caribbean, Europe, Central America, and South East Asia, I had never been somewhere that felt so… foreign. Perhaps it was the disorienting feeling of being in new a place after dark, maybe it was the isolation of being two of the only tourists, and maybe it was just a very special experience in a very exotic place. 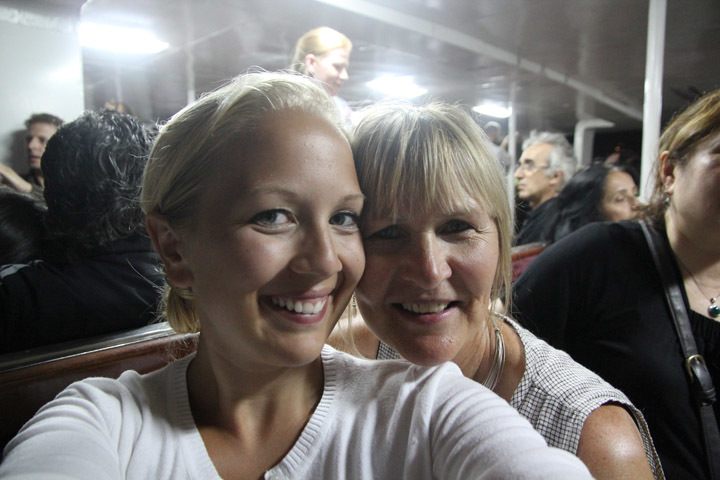 The culture shock only intensified when we returned to the boat for the return journey. At this point we had realized this was clearly not a tourist trap but fun Saturday night out for locals, and we were very lucky to be a part of it. As Turkish music began blaring from out of sight speakers, the entire boat began clapping, and in some cases singing loudly along. A few brave souls danced in the narrow aisles between the hard wooden benches as we passed under beautifully illuminated bridges. It was all we could do to clap along. 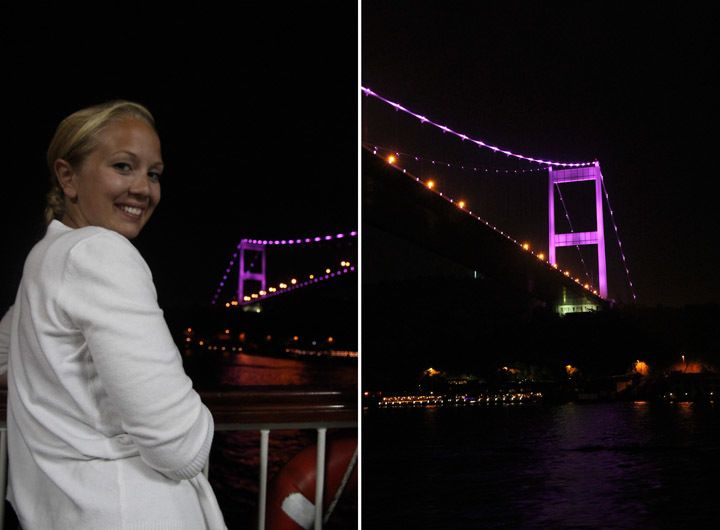 Nearly six hours later, we were back at the dock, exhausted and smiling. It was a night I’ll never forget.

Getting Witty in Istanbul The Istanbul 8
22 Comments...