I can’t quite recall when or where I first spotted a photo of the mystery-shrouded, clifftop monasteries of Meteora. But I do know that ever since the moment when that image first entered my brain, I became obsessed with seeing it not through a screen but with my own eyes.

After a few days in Athens decompressing from my weeks on the Greek islands, I was ready to finally meet Meteora. But while I was tempted by the endless adventure opportunities in the surrounding area — hiking, rock climbing, horseback riding and rafting, to name a few — I was also feeling exhausted from weeks on the go, monetarily drained from too much time in Europe, and pretty anxious to get back to Southeast Asia and settle down for a while. So while I normally pride myself on traveling relatively slowly and thoroughly, I quite happily signed on for Viator’s Two Day Trip to Delphi and Meteora. 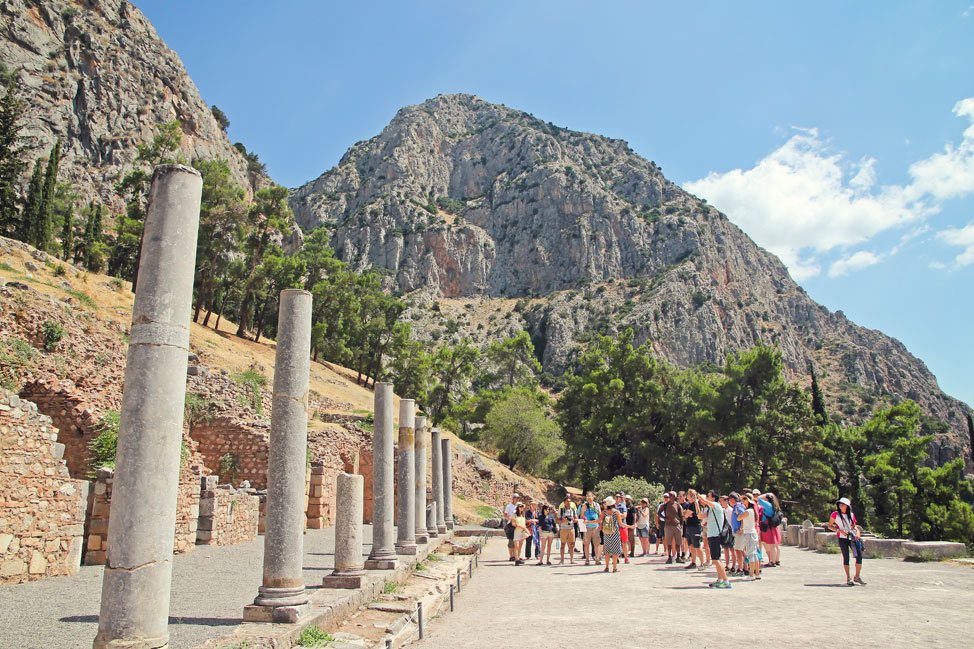 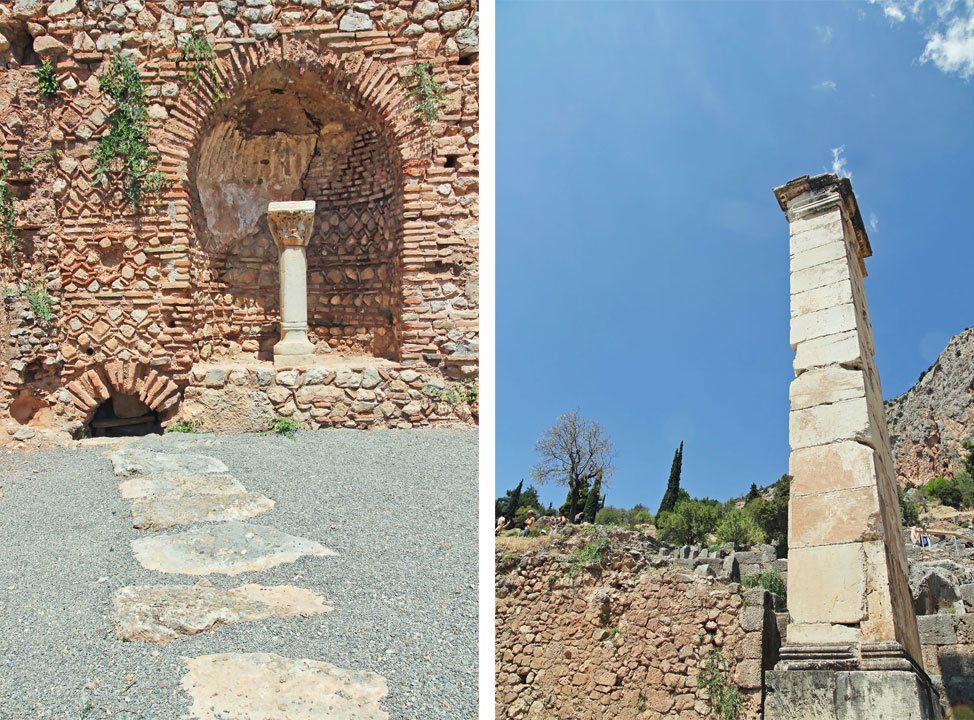 As my main objective was getting to Meteora, our first stop of Delphi was a big bonus. It was also a necessity to break up what would otherwise be two back to back days of long bus rides — an unavoidable element of trying to see these far flung sights with so little time. The good news? The scenery from my seat was gorgeous. So stunning I was almost physically aching for a camera stop, but settled for committing the vistas to my visual memory. I couldn’t believe this too was Greece, a country which so far had been all Acropolis and Aegean to me. And now, there was this.

And the feeling continued when we arrived at Delphi, stumbling into one of the most gorgeous valleys I’ve ever had the good fortune to gaze upon. 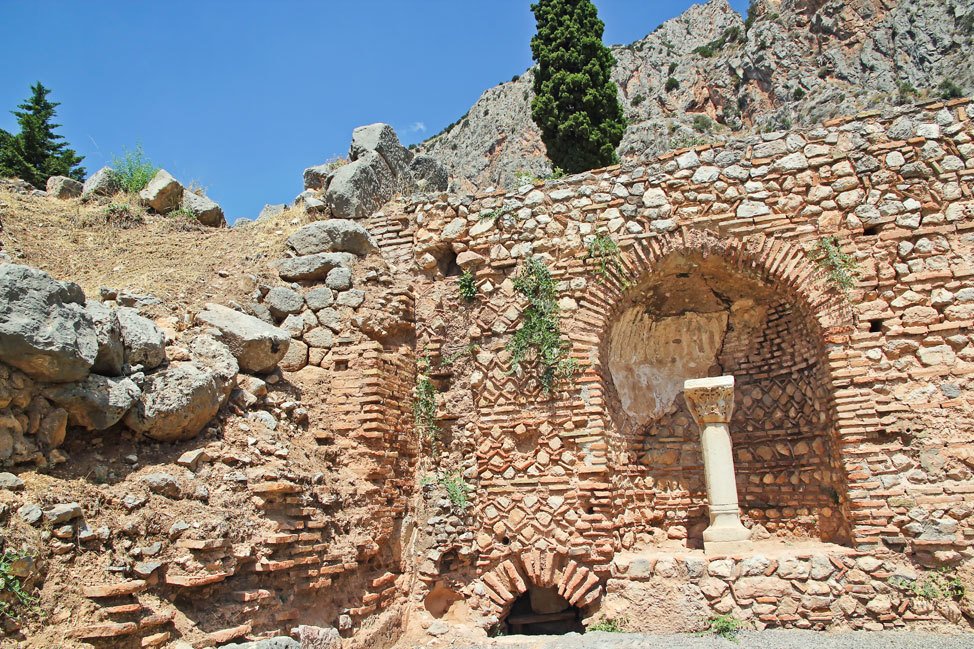 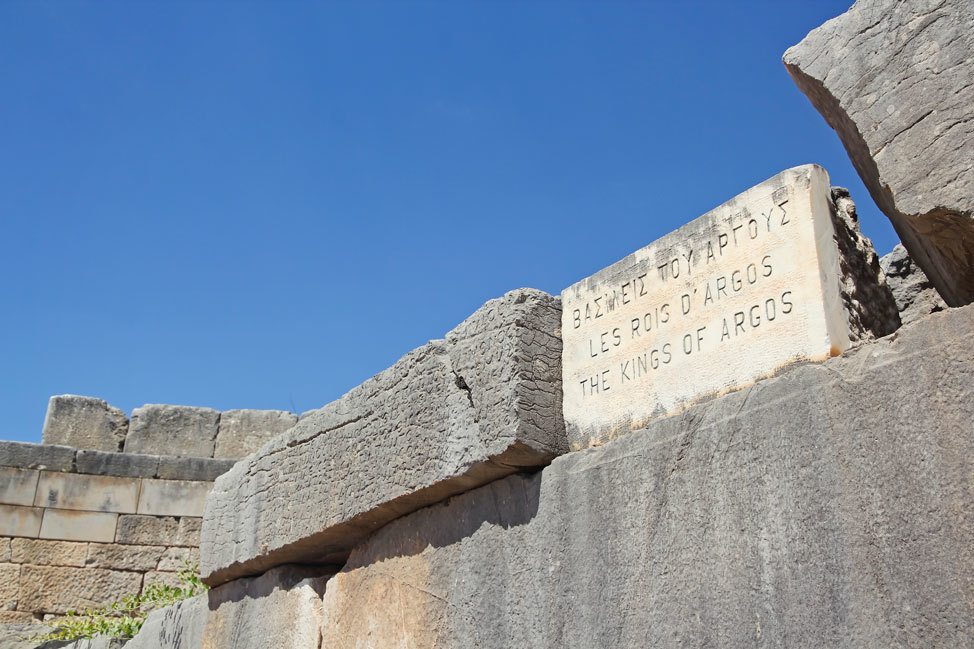 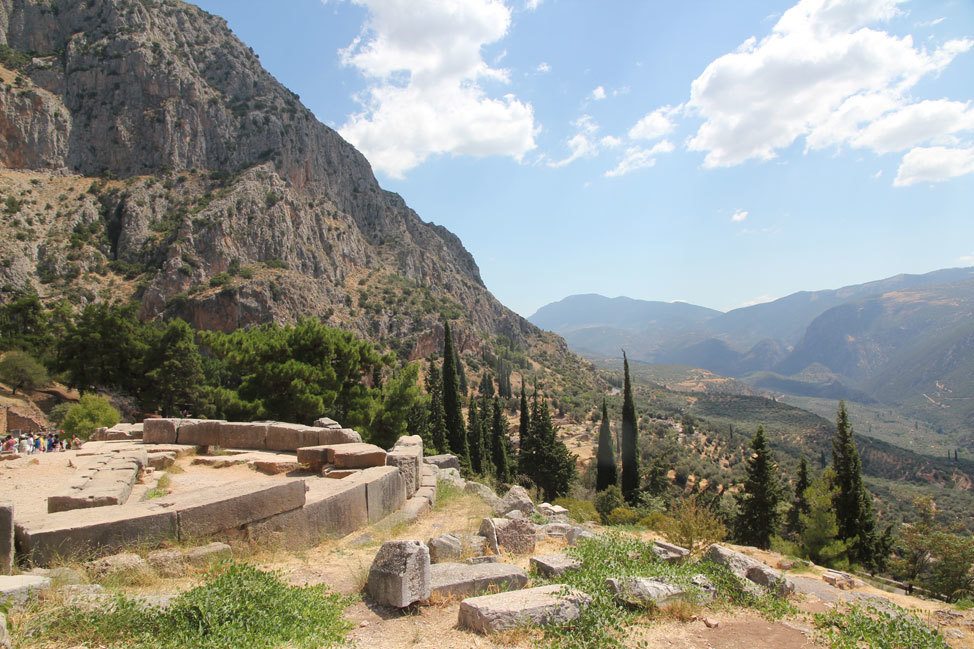 Our guide was licensed to give tours within the archeological site and so led us straight off the bus and up along the winding paths, refreshing our mythological knowledge along the way. While far from an ancient history buff, I always loved Greek mythology, and seeing the stories I first heard years ago in a classroom in Upstate New York come to life in front of me, half a world away, was a joy.

It’s hard to overstate Delphi’s significance to the Ancient Greeks. In the classical period, it is said that Zeus released a eagle from each side of the Earth, and Delphi was there they crossed paths. Hence, the city was seen as the center and navel of Mother Earth. Delphi would go on to be home to the Pythian Games (similar to the ever-so-famous version held at Olympia), to the most important oracle in history, and to the Temple of Apollo. 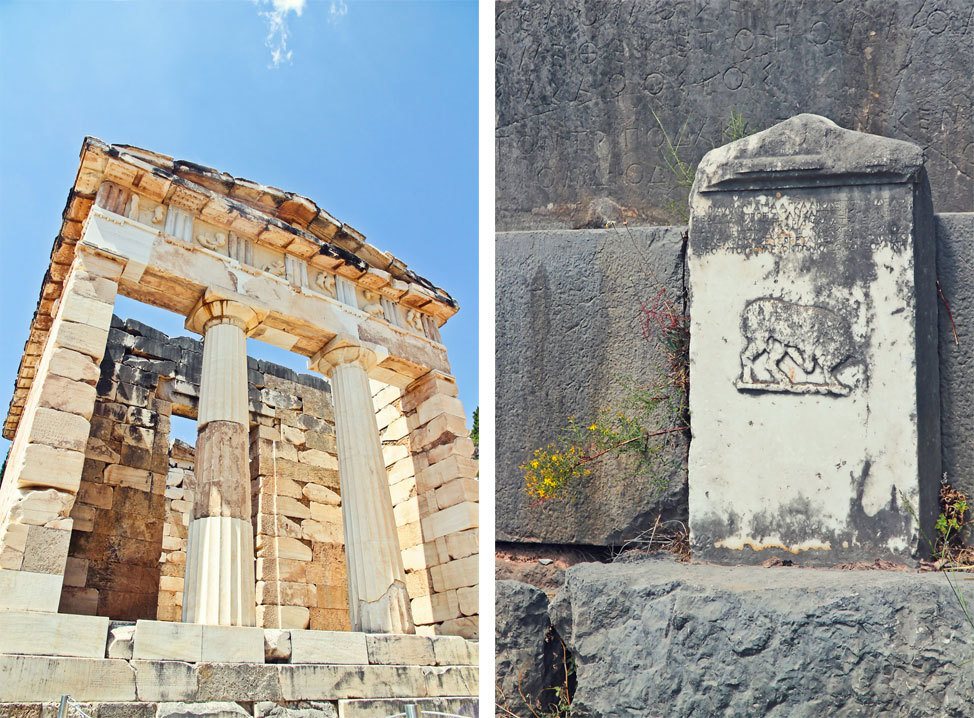 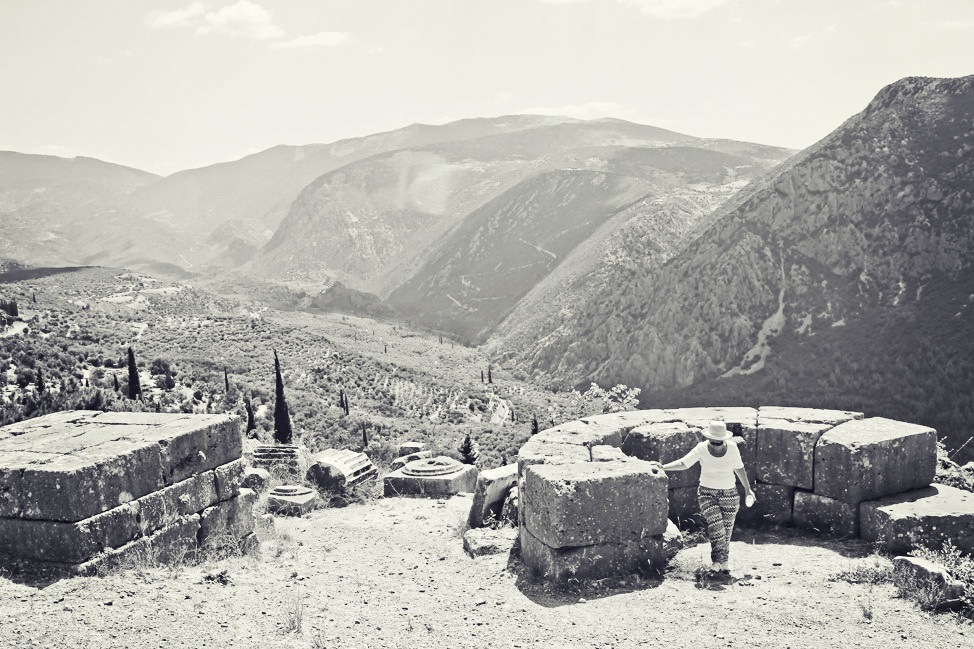 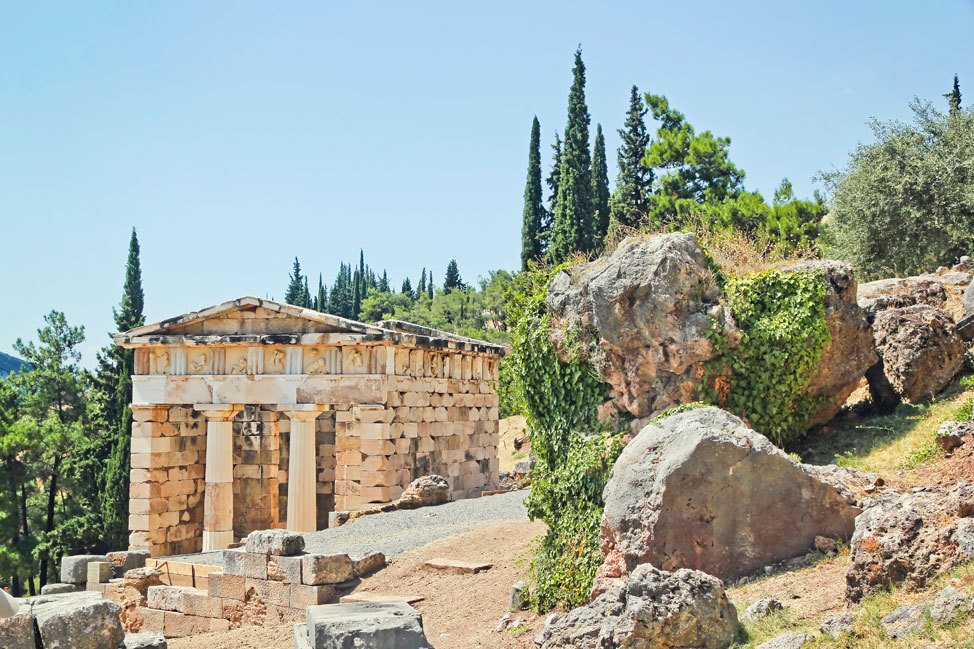 My favorite historical detail of the day was the myth of Apollo’s first trip to Delphi, in which he arrived in the form of a dolphin, carrying priests from the isle of Crete on his back. I hadn’t realized dolphins played such an important role in Greek mythology, and I was immediately reminded of my travels in the Peruvian Amazon, where local legend is that dolphins are descendants of spiritual humans, explaining their abundance in waters where almost every other creature has been hunted to the brink of extinction.

However, as much as the history, I simply enjoyed wandering the ruins of this epic city and exploring it through the lens of my trusty dSLR. 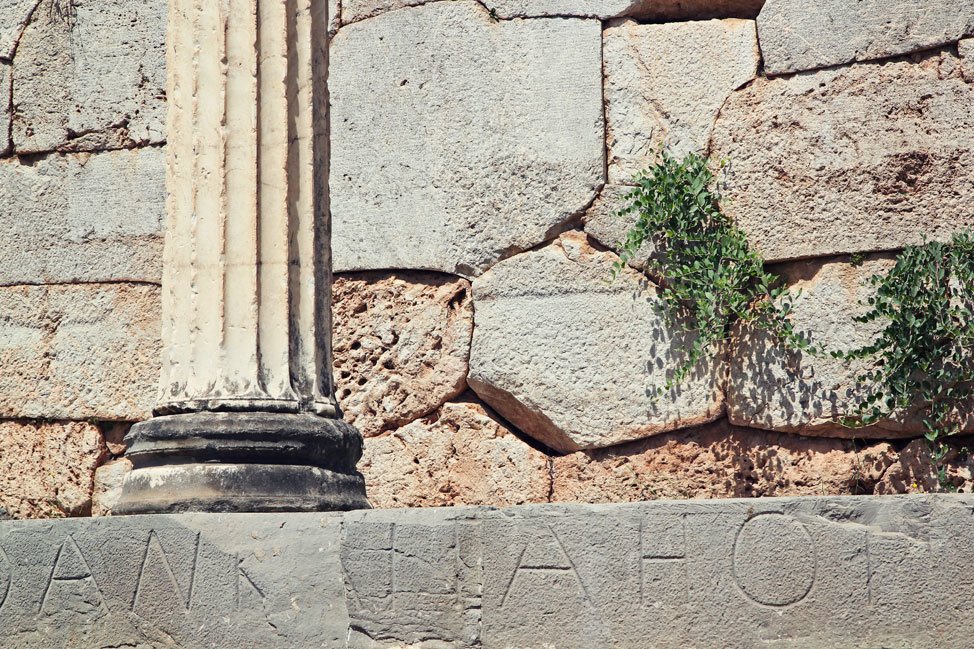 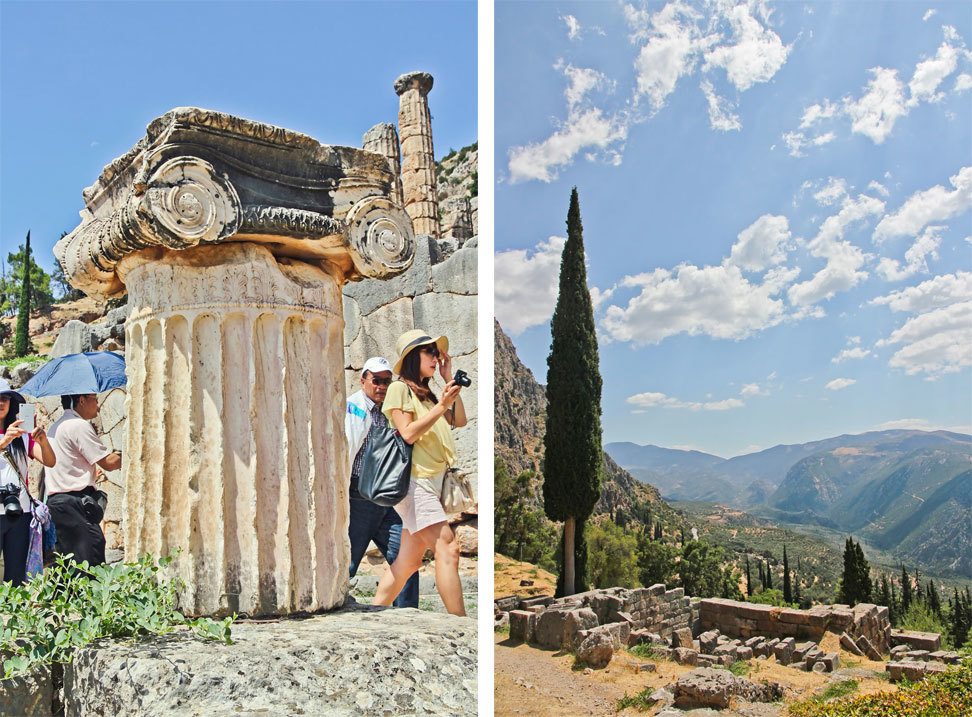 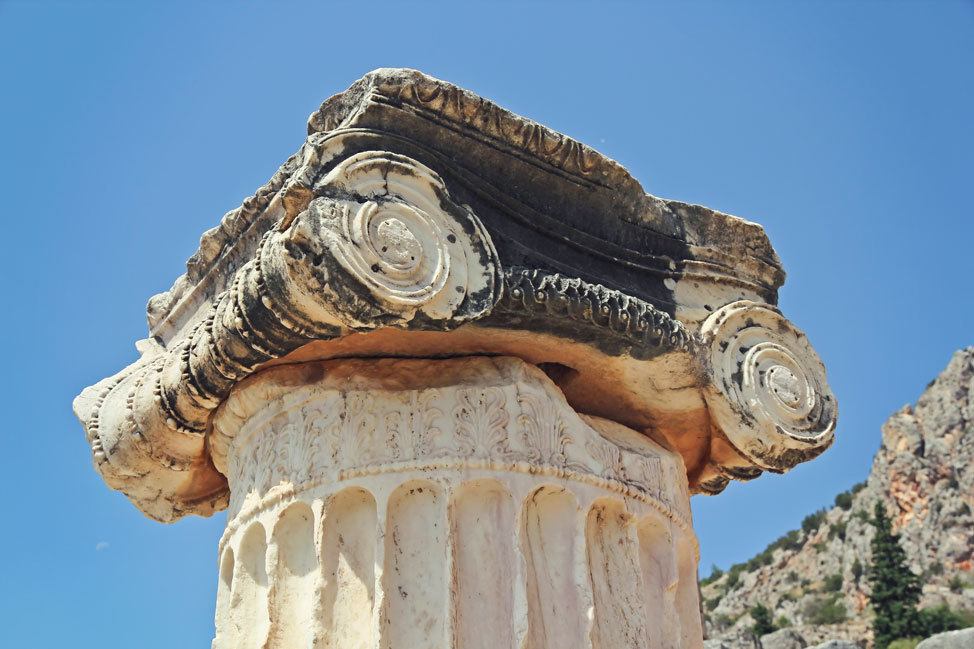 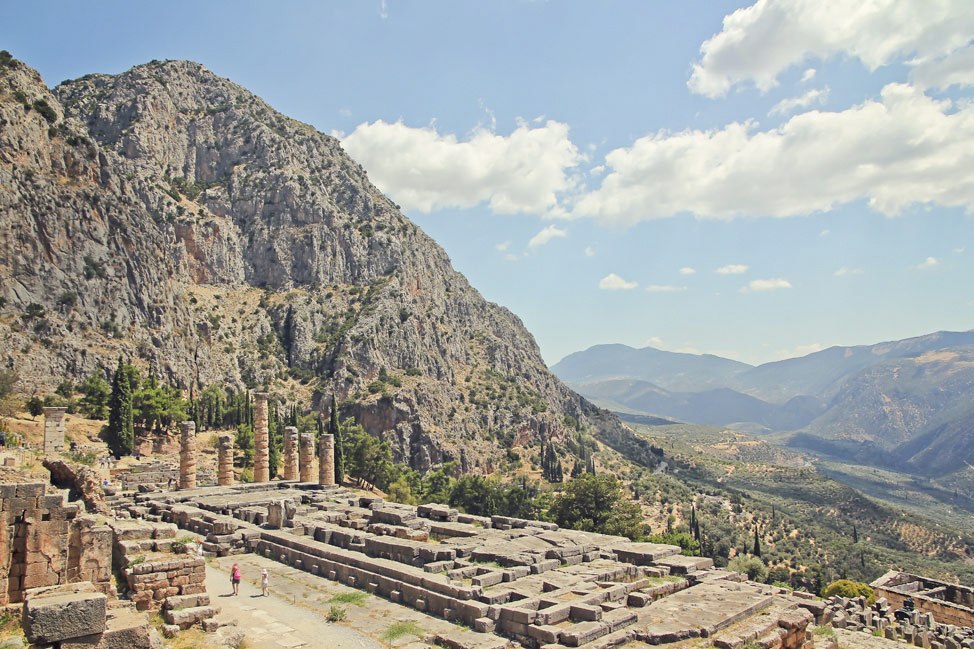 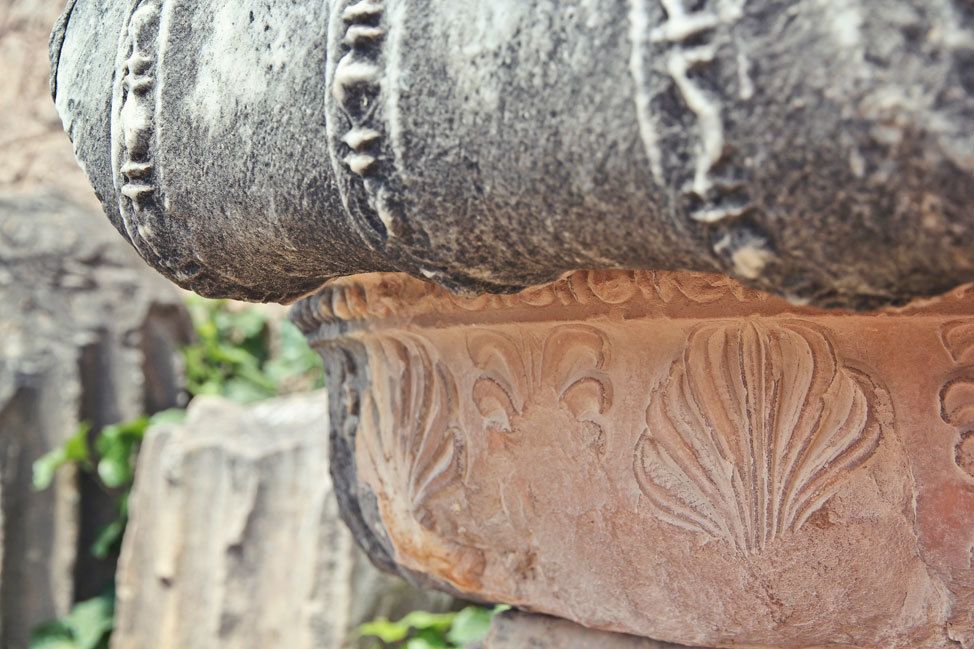 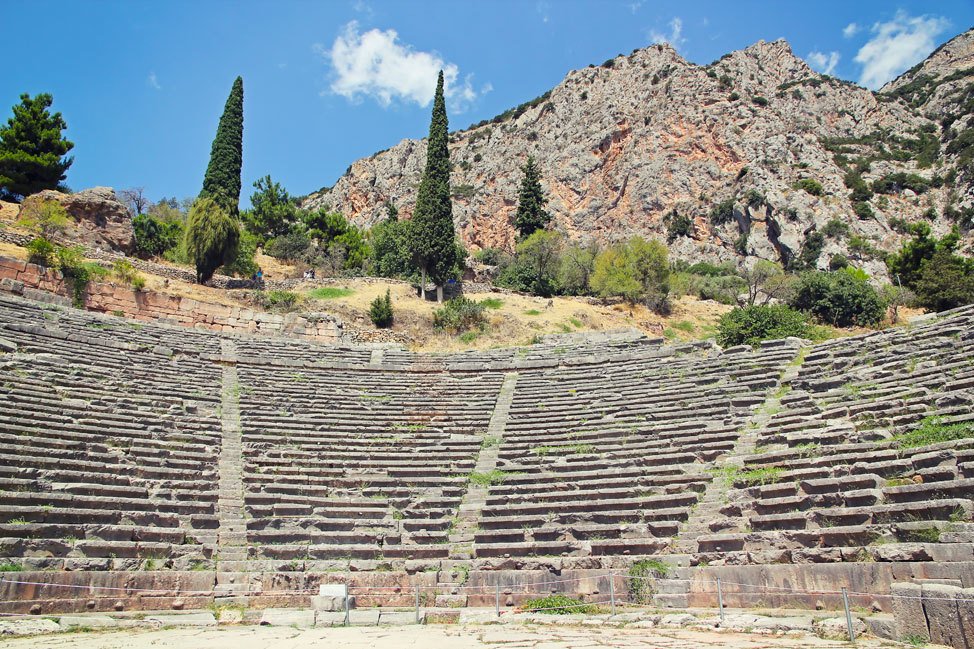 Now, all my solo travelers out there — praise Zeus for self-timer selfies, am I right? I have pretty much given up on trying to ask other travelers to take my picture and instead just look for a ledge where I can toss my camera up and throw on the timer. Embarrassing in front of onlookers? Yes. But well worth it to prove I was, you know, there. And to remind myself to request a hotel iron next time I wear those shorts. 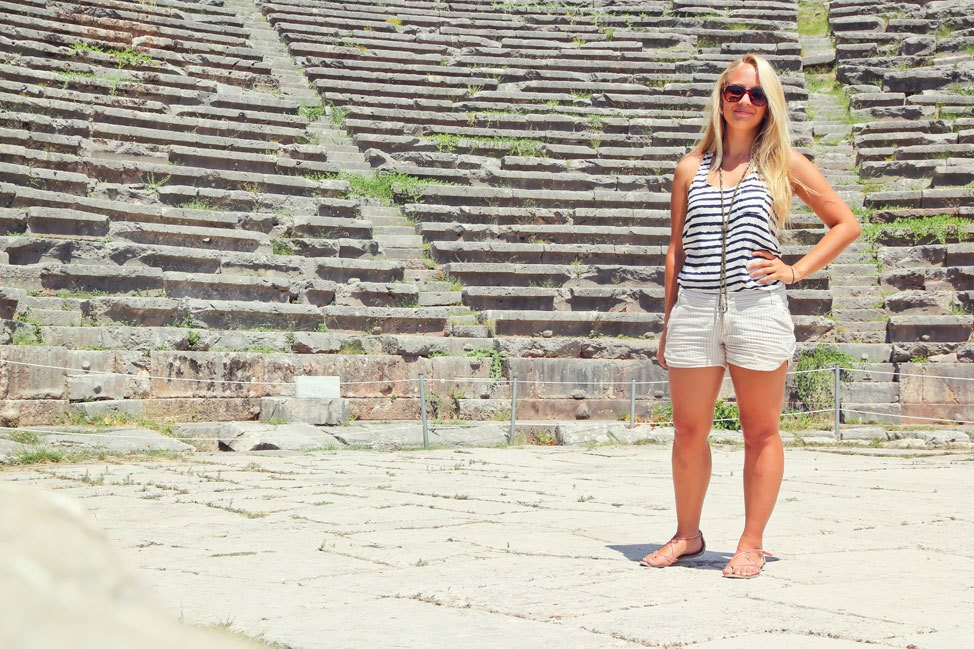 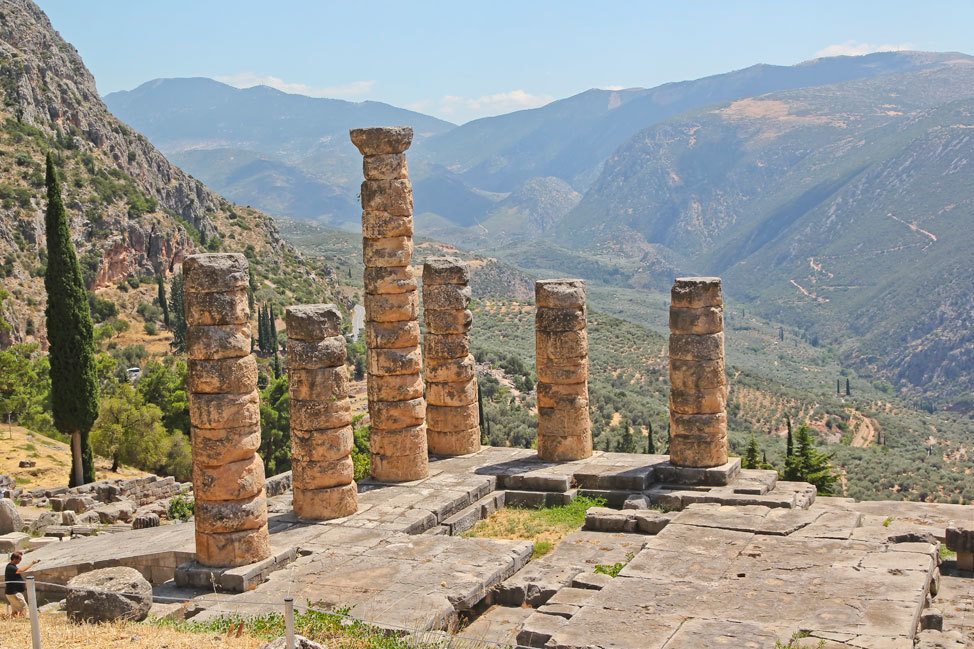 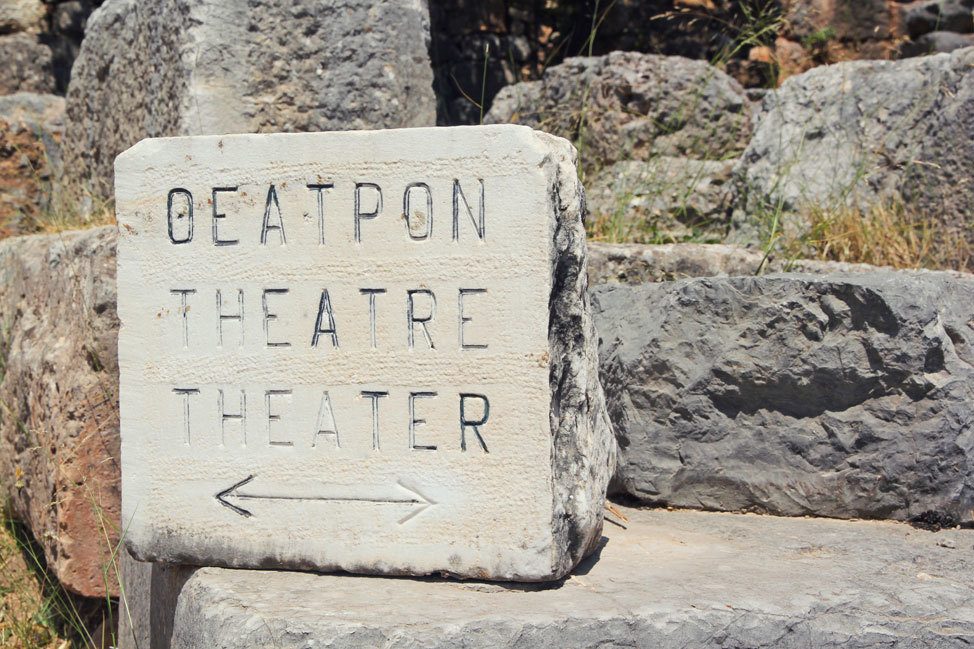 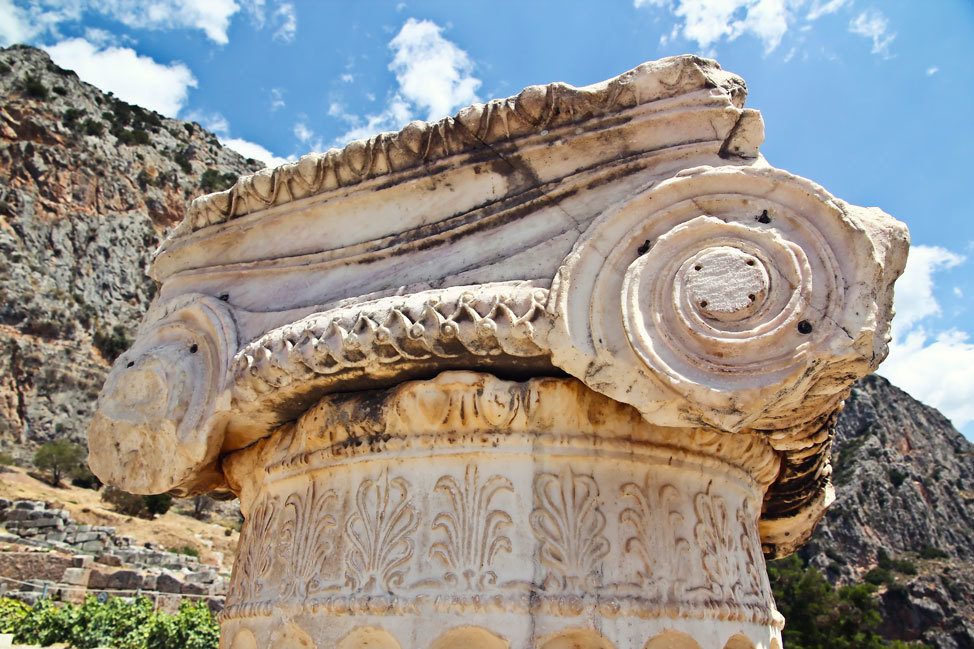 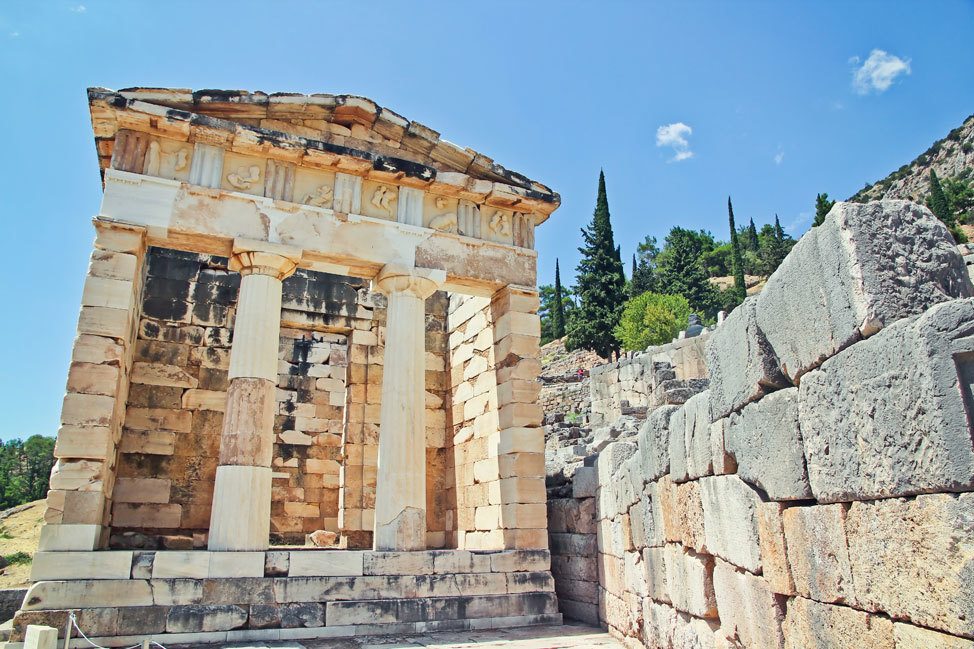 After an hour and a half of exploring Ancient Delphi, it was time to head to the modern one and split off into two groups. The one day tour groupers were to explore the Delphi Museum before making their way back towards Athens, while those of us in the two day tour joined up with the last half of a four day tour around Mainland Greece. Unfortunately, due to the logistics those of us on the two day tour didn’t have the option to see the the Delphi Museum. But there was also an option for a three day tour, which was basically the exact itinerary I was on with 24 hours in Delphi injected in the middle — enough to hit up the museum in the afternoon, and spent the next morning kicking around the hotel pool. I strongly considered this option but in the end just ran out of time in Greece.

Sound confusing? While I’d been worried in theory these mix n’ match tour legs would lead to a disjointed overall experience, I was actually relieved by it in practice — our first tour guide had certain speech patterns that were driving me slowly insane and so I was overjoyed to be handed over to my new guide, Joy. It turned out to be a nice benefit to the way the tour was structured. Don’t like your tour guide? No problem. Here’s a new one. 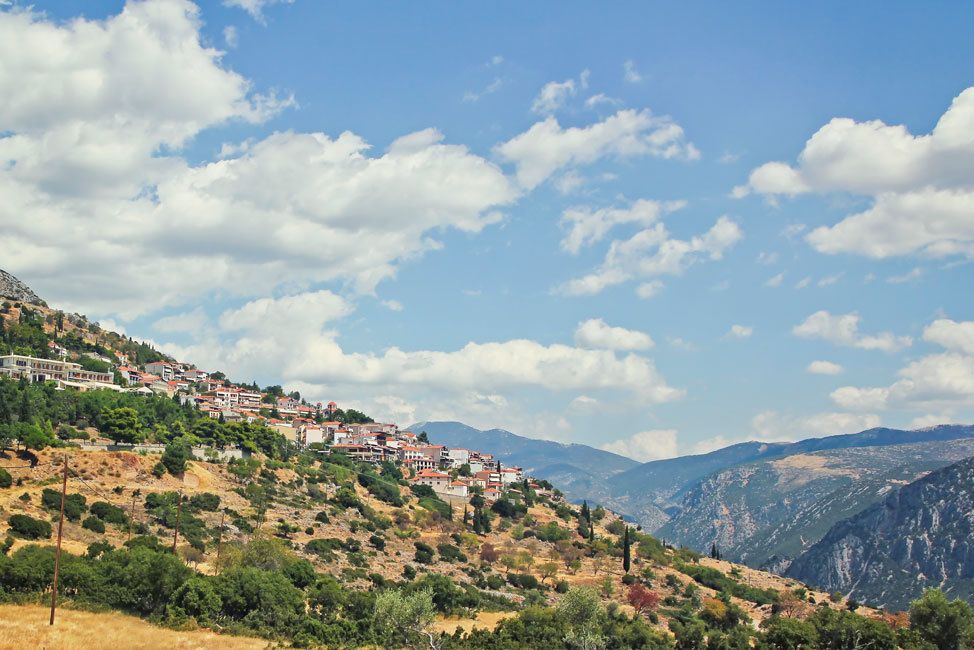 After a lunch stop in modern Delphi, we wound our way towards Meteora. Joy’s commentary made the long drive more than manageable, and before I knew it we were pulling in to Kalambaka, the small town base for visiting Meteora. Because our hotel was not walking distance from the city center, we were given some free time to hit ATMs, fuel up on snacks, and stretch our legs after the long ride.

I was pleasantly surprised by our digs for the night, which boasted an idyllic pool and rooms with inviting soaking tubs. Yet we weren’t staying for long — I was early to bed and for once not dreading a dawn wake up call. After triple checking my cameras were charging, I fell asleep that night buzzing. I was just mere hours away from Meteora, and Delphi had been the perfect opening act. 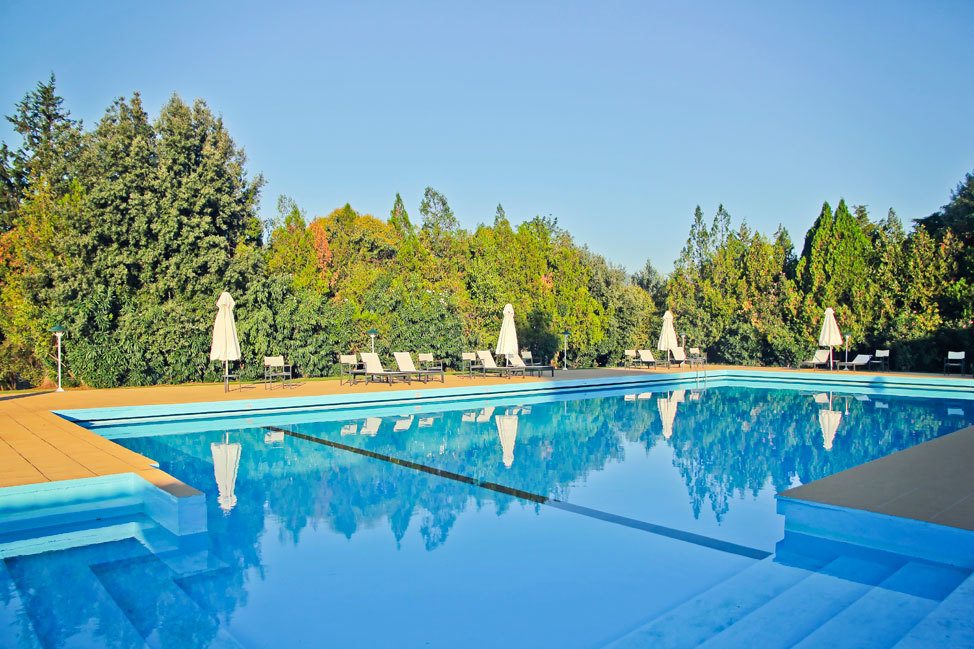 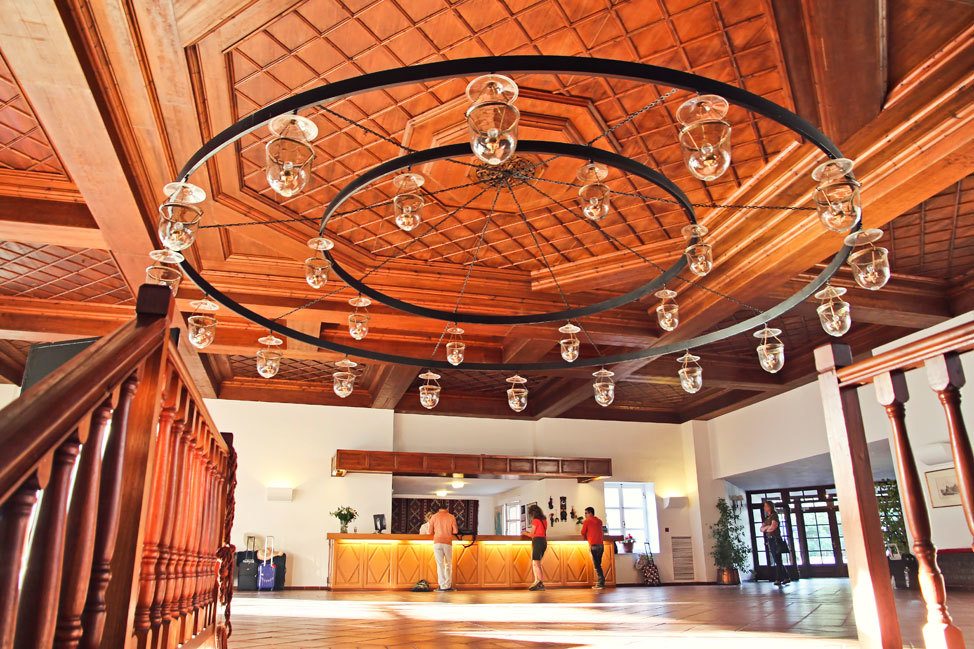