A Ninety Minute Tour of Indonesia at the Devdan Show

Though I have yet to see a Cirque de Soleil show — something I’m eager to cross off my bucket list — I have been seen many shows along the same vein in my international travels. First I attended Vivendi Cabaret in The Cayman Islands, followed by Smile of Angkor in Cambodia, and finally Siam Niramit in Bangkok. The ones in Asia all have a few things in common — gargantuan theatres, massive casts, impressive acrobatics, and an attempt to convey the home country’s culture to the audience. 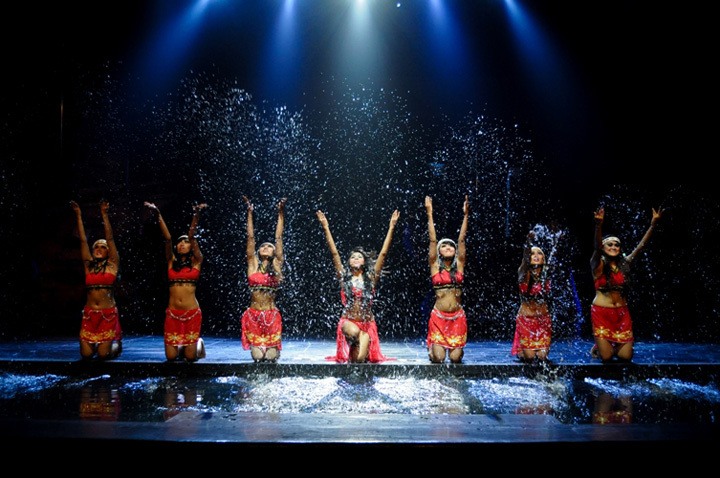 The Devdan Show in Bali, which I attended during my stay at the Grand Mirage, continued with that theme. In it, seven vignettes are presented through the storyline of two children — the narrators of the show — who separate themselves from their tour group and find a treasure chest that transports them to various islands of Indonesia. Through dance, costume, and often wild interactive sets, the audience is introduced to the islands of Bali, Java, Sumatra, Borneo, and Papua.

While I found the child narration bit to be distracting and a bit corny, I truly enjoyed several of the island scenes. I loved the traditional Wayang puppet show of the Java portion, the intense body paintings of the Papua scenes and the rhythmic movements of the Saman dance of Sumatra. The water dance and the Cirque-like aerial silking portions of the Borneo segment had me ready to book a plane ticket. There were a lot of “wow” factors in this show — rain coming down on the set, confetti shooting out to the audience, dancers coming down the aisles of the seats and plenty of smoke and fire. 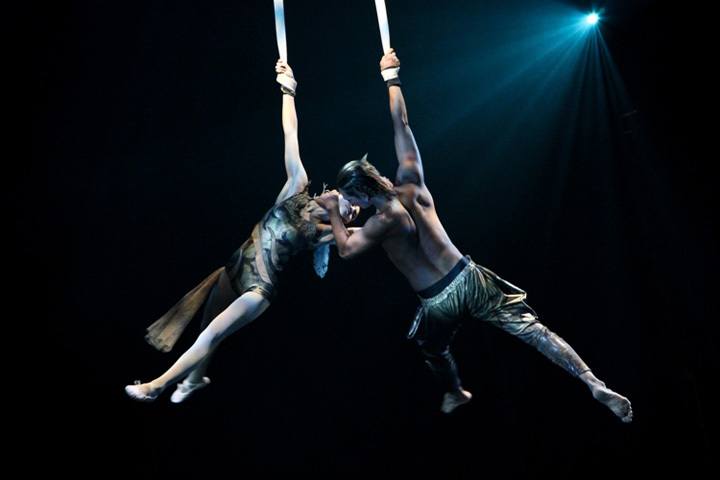 The ninety minute Devdan show runs four nights a week. Adult tickets start at $65, while children start at $42. The price and cheesiness-factor would probably put me off of recommending this show to backpackers, though I think it would be a great night out for those traveling with kids and a little extra cash. The show is clearly immensely popular — it’s ranked #1 for attractions in Nusa Dua on Tripadvisor, and it’s been featured by Conde Nast Traveller as one of the “10 Things to Do with Kids in Bali.” I do have my one little usual photographer complaint — I wish photos were allowed inside! I would really have enjoyed being able to capture some of the magic of this show through my own lens. For now, I’ll just have to rely on memories of my ninety minute visual-treat tour through Indonesia’s beautiful islands.

Has anyone else seen any of these impressive acrobatic shows anywhere else in the world?

Many thanks to Devdan for their hospitality. While I was a guest of the show, as always all thoughts and opinions are my own.

Going Back to Southeast Asia

The Great Escape: Months 23 and 24 Roundup

Photo of the Week 106 Gettin’ Graduated! The Kickoff of my Visit Home
3 Comments...