Seeing an Apsara dancing show is high on the to-do list of any tourist visiting Cambodia. The classical Khmer dance incorporates ancient stories into the performance, making it into a hybrid dance/drama. For visitors to Siem Reap, there are many options for seeing Apsara, from a casual free show at a dinner restaurant to brand new full on Vegas-style review. You all know how much I love Vegas, so after seeing a more traditional performance one night at Temple Restaurant, I was gung-ho to see a splashy show. 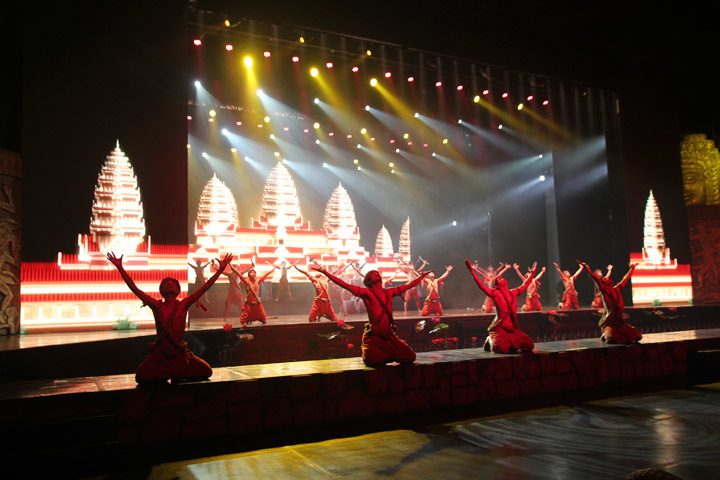 Smile of Angkor certainly delivered on that front. The show consists of several different acts, ranging from large full cast numbers to more individual performances. Highlights include acrobatics and an edge-of-the-seat fire show. 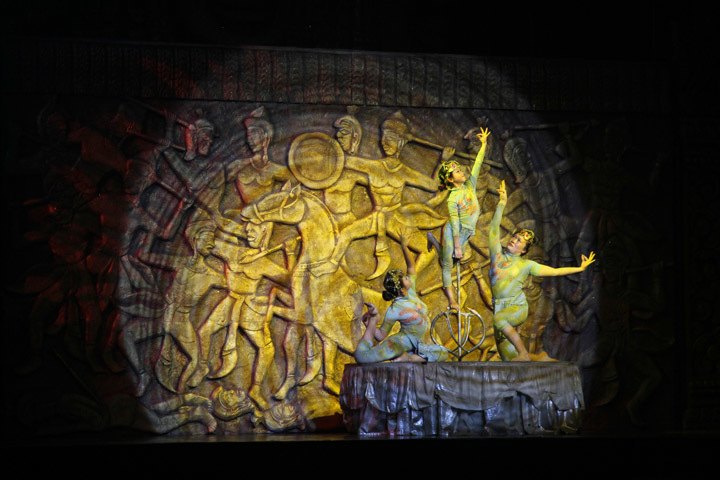 These peacock costumes, featured in all three of the Apsara performances I’ve seen, are my favorite. Look at the little hat! Wouldn’t these make for great Halloween costumes? 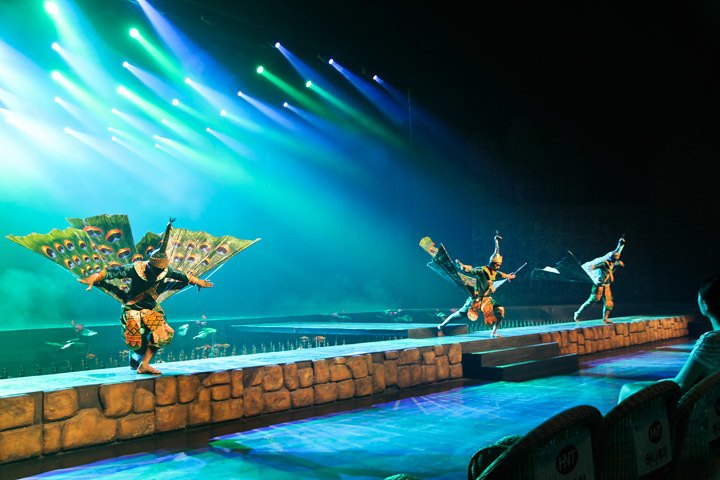 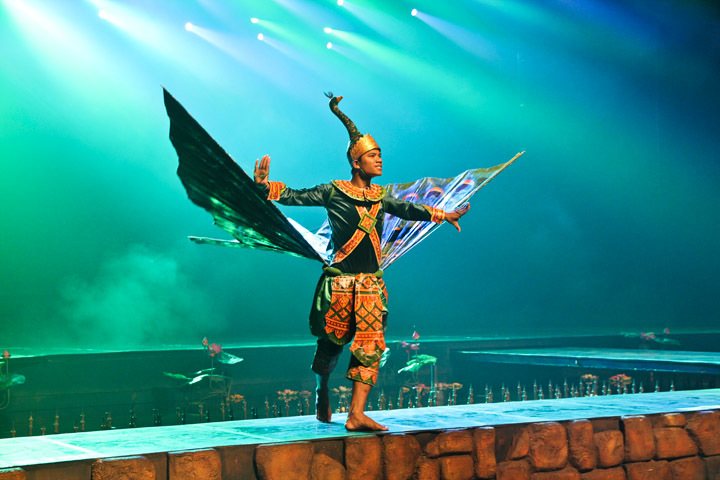 One of the most clever parts, I thought, was when the cast reenacted a scene from the bas-reliefs of Angkor Wat. The scene The Churning of the Milk is one of the most famous stories played out on the temple’s ancient passageways, and Smile of Angkor brought it to life. Mark and I immediately recognized it from our visit to Angkor the day before. 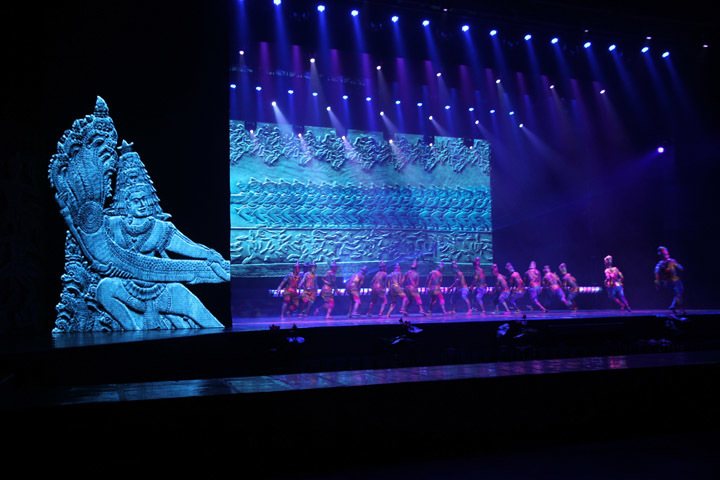 On the positive side, the cast put everything they had into their performances. The costumes were beautiful and the sets were fun. On the other hand, those expecting Broadway style choreography will be disappointed. And personally I was turned off by the graphics being projected behind the actors in many of the acts (see the first photo of the post). However, this show certainly doesn’t advertise itself as being traditional, so the lights and lasers are all part of the deal. 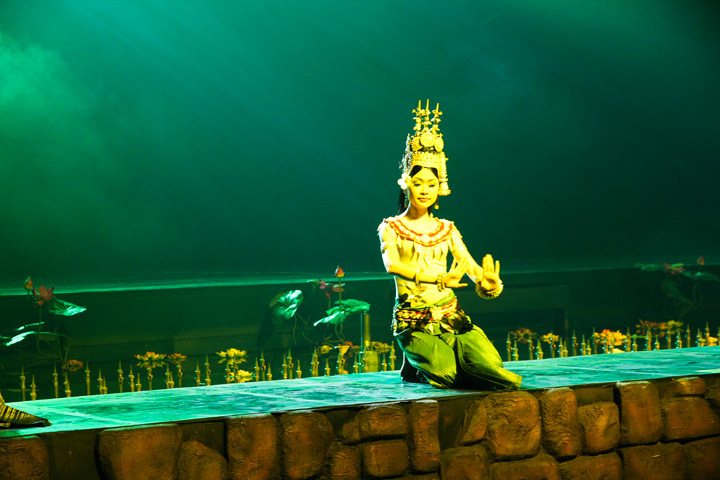 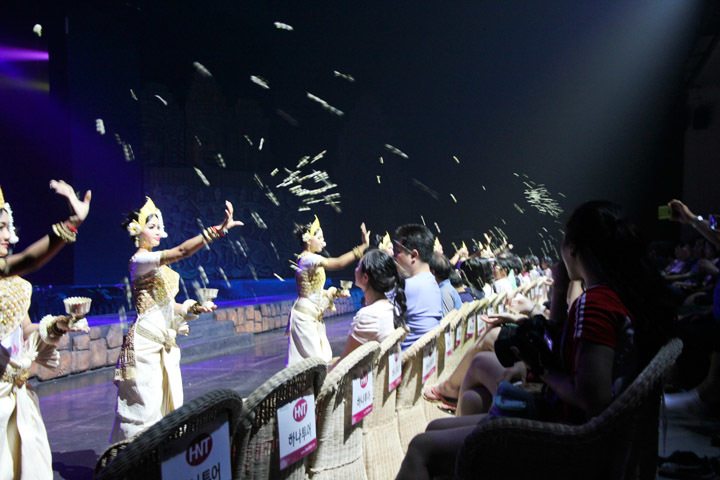 At $38-$48 per ticket, this show is certainly not aimed at backpackers. And the over-the-top graphics and cheesiness factor would turn off many visitors. So who is this show aimed at? Well, if the crowd on the night we visited is any indication, the answer is Asian package tour groups. Also, I think this show would be perfect for families, especially parents who want to reward their kiddos for being such good temple troupers all day at Angkor Wat. 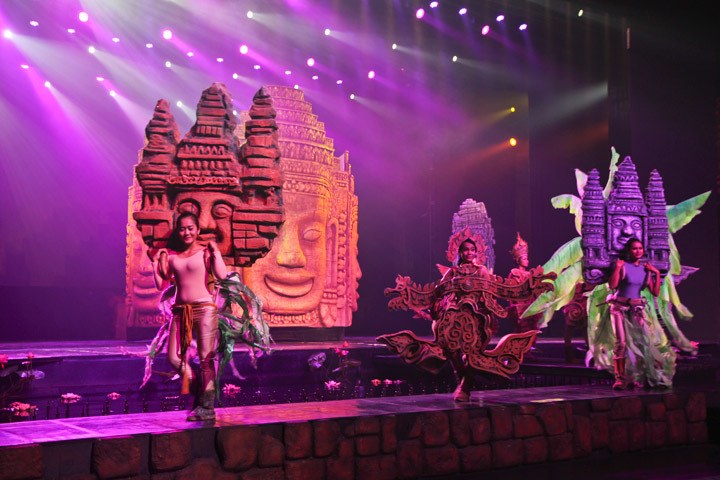 If you go: Shows are held every evening from 7:15 to 8:25pm. Tickets can be purchased from the ticket office in town, next to the Prince d’ Angkor hotel. The theatre is decently far from town, so make sure to leave at least 15 minutes to get there in time, and not run in late like moi. Expect to pay $4 return for a tuk tuk driver, and make sure he waits for you, as the theatre is in a remote area! For more information, visit https://www.smileofangkor.com/ 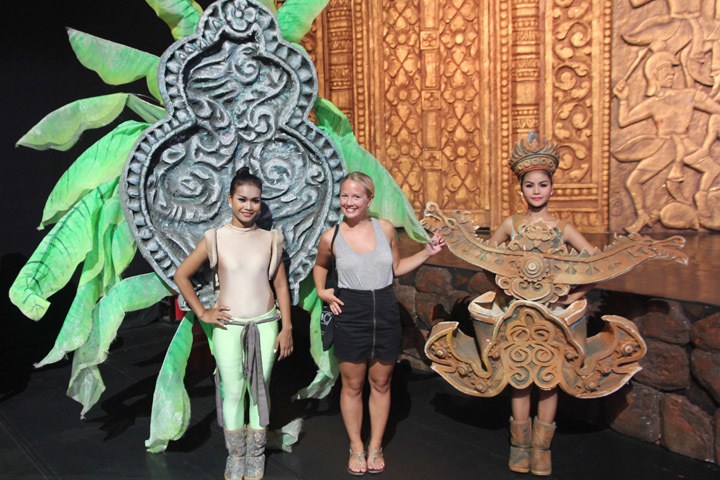 Full disclosure: For the purpose of reviewing Smile of Angkor, we received a complimentary admission.  As always, all thoughts and opinions are my own.

Vote on Where Alex in Wanderland Goes Next! The Children of Cambodia
12 Comments...