I’m very proudly not a foodie (though I do need to write an update to my now somewhat out-of-date post declaring so), but I do love to eat. No matter where I am in the world, excitedly planning my meals for the day is one of the first things I do when I wake up in the morning.

And when it comes to travel, I’ve realized that some of my favorite tours across the globe have been of the culinary persuasion — a chocolate-making workshop in Brussels, a pisco-sour mixology class in Lima, an artisanal market tour in San Francisco, a wine-tasting with a sommelier in Santorini, and a cocktail tour in New Orleans. And for better or for worse, as the jean shorts I haven’t been able to zip up since the first day of this trip can attest, when I post photos of those delicious treats on Instagram, I actually do eat them immediately. 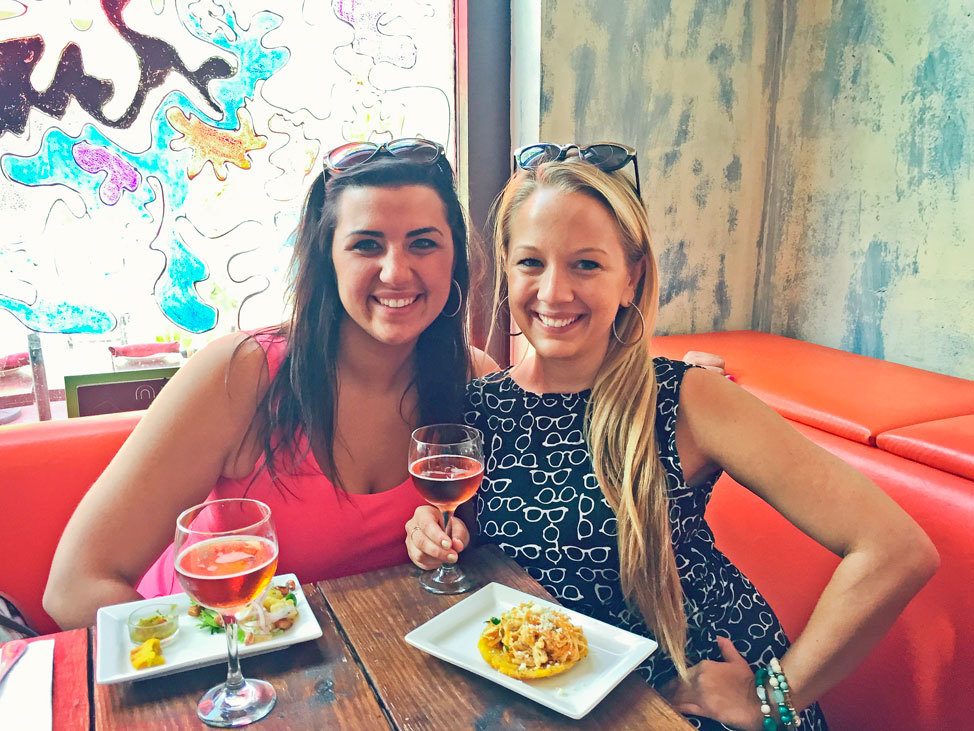 So when Michelle and I started brainstorming for something fun to do in Miami, it’s really no surprise that we were immediately hung up on the South Beach Food and Cultural Walking Tour.

We arrived at our designated meeting point ravenous. Our first stop was Bolivar, where our group settled into booths of the restaurant opened especially for us. Michelle and I sat opposite two friendly older couples from Ohio and Virginia, while two sets of hipsters from Vancouver settled in at the next table. Our fast-talking guide had us struggling not to laugh with our mouths open while we noshed on Colombian specialties like patacones and a special hangover cocktail called caldo de costilla. And as I don’t eat fish and skipped the ceviche, I was given a delicious empanada to fill the gap on my plate. I was basically obsessed with everything I was eating and started to grow concerned for the rhythm of this tour — how could things possibly go up from here? I immediately vowed to return to Bolivar for a full brunch on my next return to Miami. 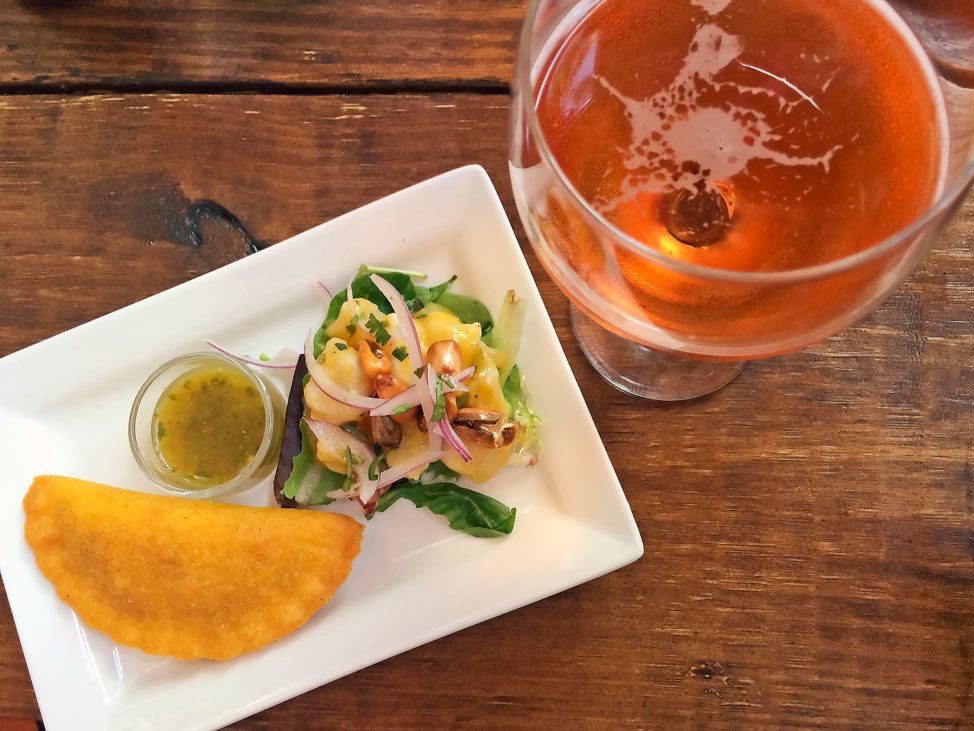 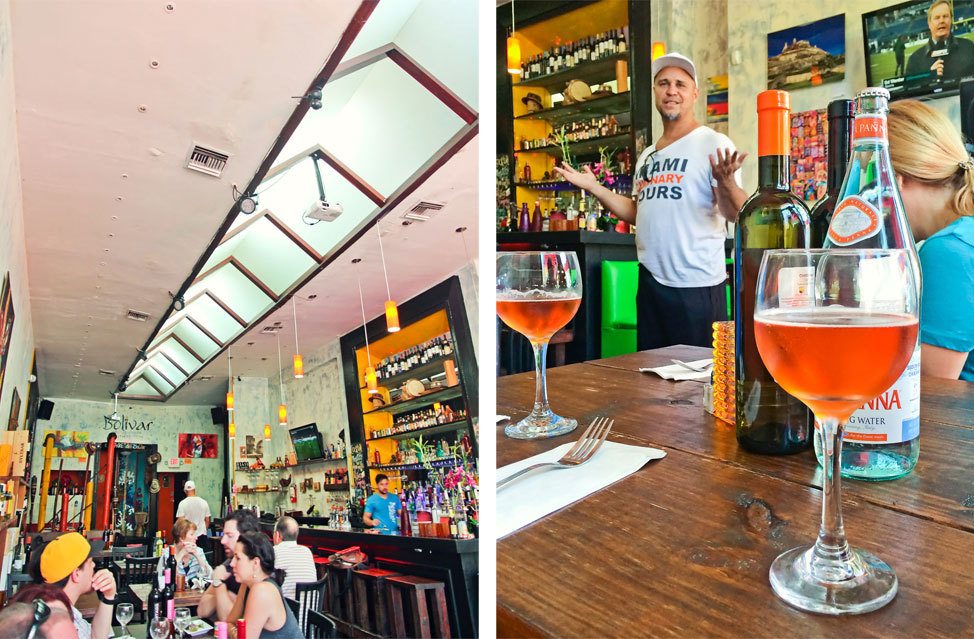 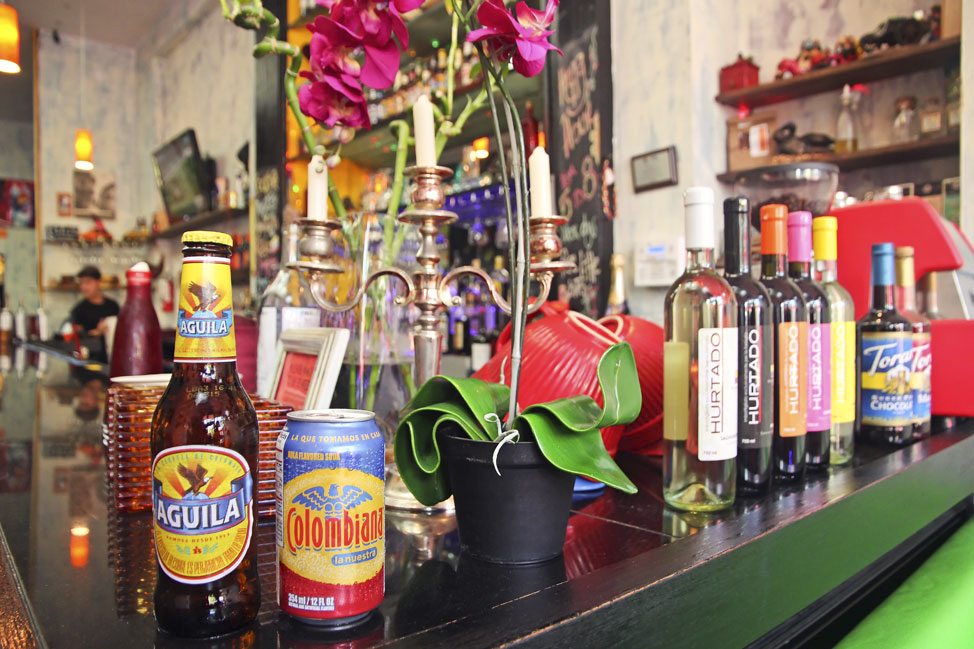 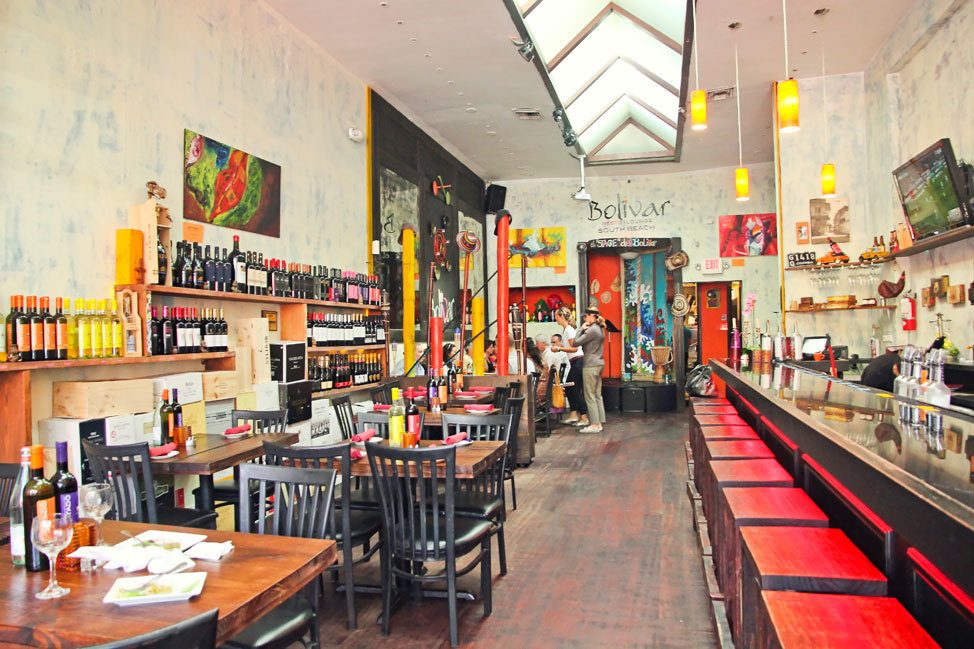 Well. It was a good thing we had a sweet stop coming up, because I was about to have my heart broken by the news that DEXTER WAS NOT EVEN FILMED IN MIAMI. Guys, that loveable ‘ol serial killer was one of the main reasons I was obsessed with coming to the city in the first place! Well, him and Will Smith! I was totally crushed by this development and thought wistfully of the steamy, palm-lined, salsa-music-filled scenes I could never un-know were not, in fact, filmed in South Florida.

I consoled myself with delicious churros from Manolo, a bakery where customers only seemed to order in Spanish — one of those little details that can make a person smile even when their TV-loving soul is crushed. 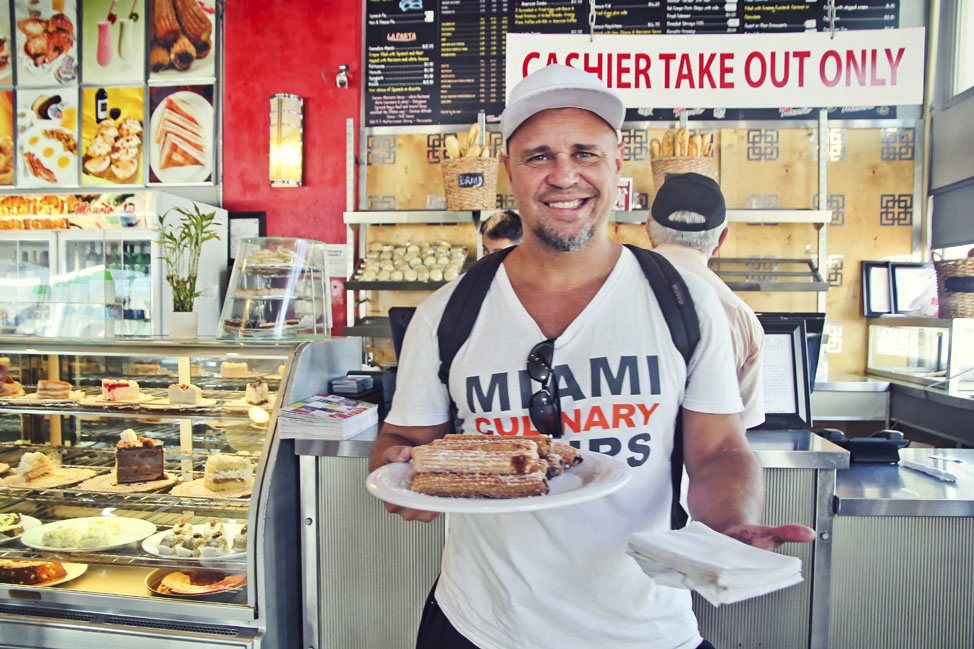 We meandered our way into the Art Deco district, and along with my churro, I devoured every historical tidbit our guide offered as we strolled. He was quickly joining the ranks of tour leaders so excellent at what they do that I’ll think back to their fine work years later. When he mentioned he was from Panama City, we excitedly compared notes on the beautiful city and some of the restaurants I’d drooled over there.

Excusing himself from our travel talk, he positioned the group so we were facing the Versace Mansion while he outlined its lurid history. “Let me know if you see anyone wearing Speedos walk by,” he said gravely, “so we can make a citizen’s arrest.”

Our third stop was at Tides, an iconic Ocean Drive hotel. No plates had been passed out, yet I was already drooling over the interiors — gorgeous! And the Moroccan chicken stew that we were handed was equally as exclamation worthy. In fact, I was starting to get a little panicked about how full I was. Both places we’d sat down had served what I’d consider a smallish meal — there was to be no going hungry on this food tour. 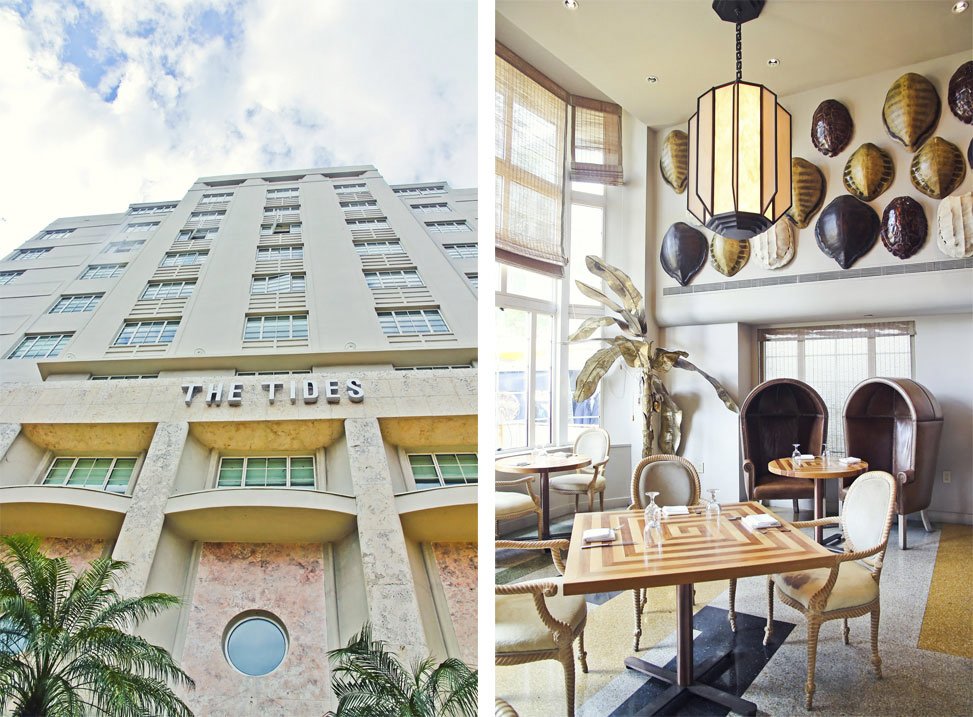 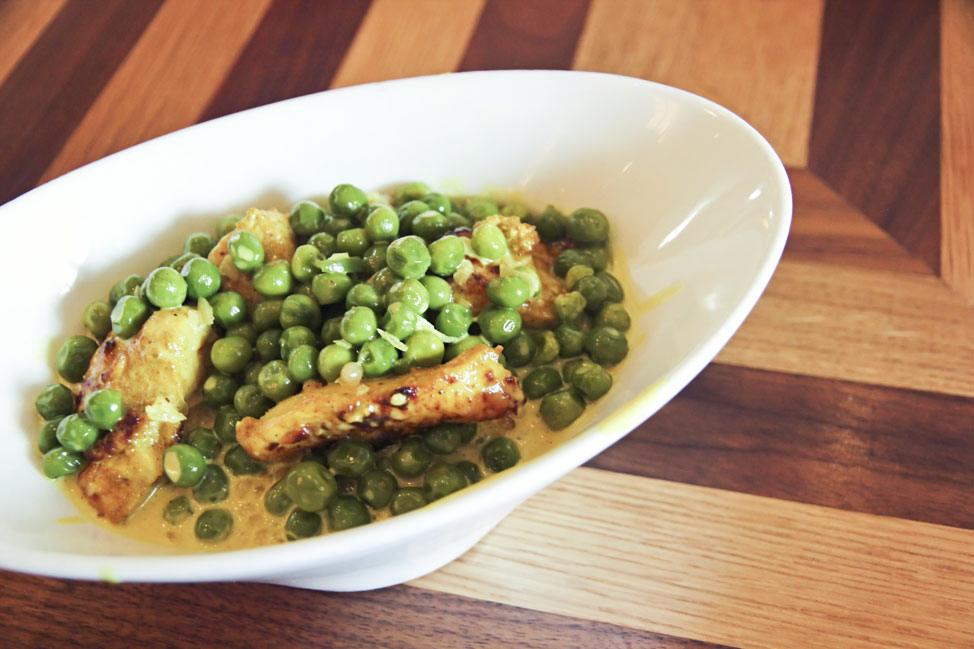 Luckily, if you look at it from that perspective, I wasn’t so into our next stop. Habanos was a classic diner that served us up some classic Miami eats — Cuban sliders and Cuban espresso called cafecito. I wasn’t feeling either, though as a non-coffee drinker at least half of that wasn’t a surprise.

Next up was Blocks Pizza, which won me over pretty much immediately for their cute branding and t-shirt offerings. We were there not for a slice, however, but for a Sun Dried Hippie Sandwich, a creation featuring sun dried tomatoes, feta, baby spinach, basil pesto and kalamata olives (the last of which I removed with a plastic fork, because I am an adult.) At this point, many of us were clutching our full stomachs and so we were provided, thoughtfully, with to-go bags — and that sandwich became a much-appreciated snack later on that evening. 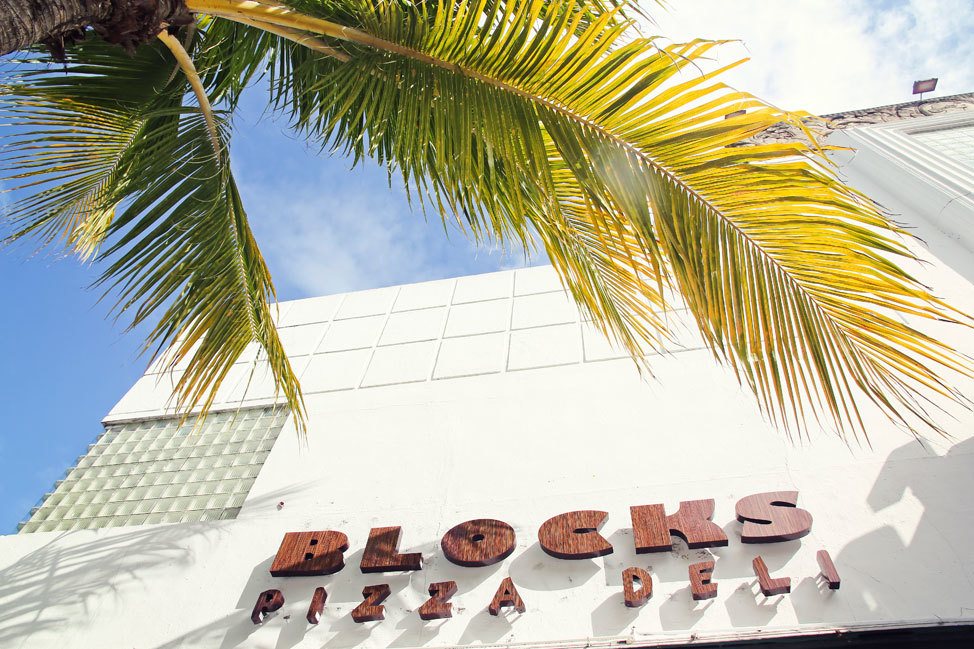 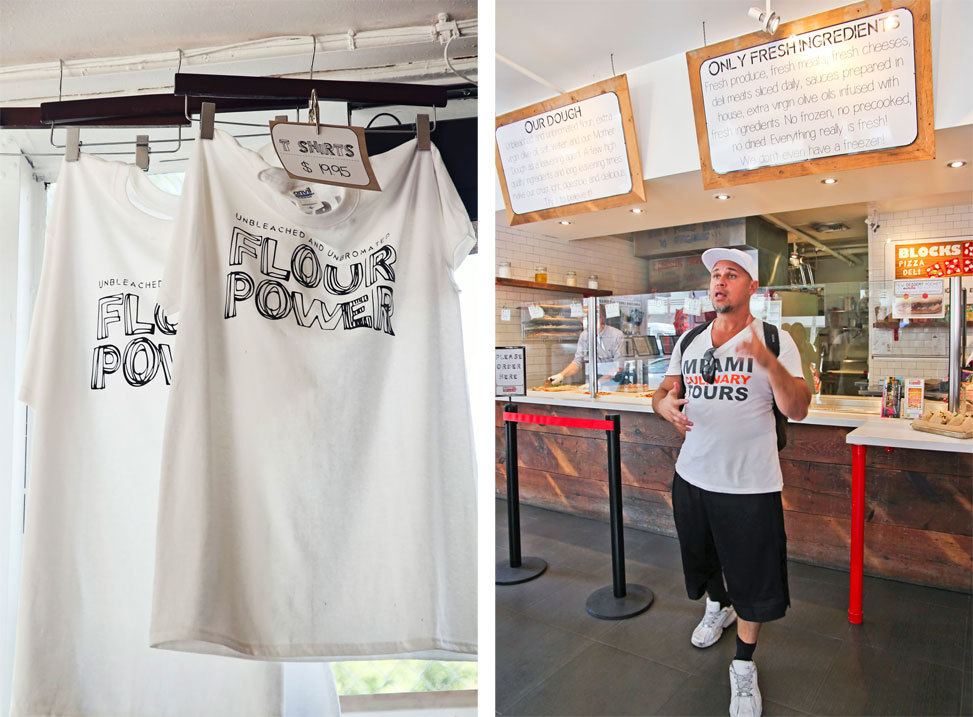 Of course, no one is ever too full for gelato, a theory we were all pleased to prove at our final stop of the day, Milani Gelateria. After enthusiastically choosing a scoop of Nutella flavored goodness, we took a seat on the giant ice-cream cone furniture on the sidewalk and toasted to a well-fed afternoon. 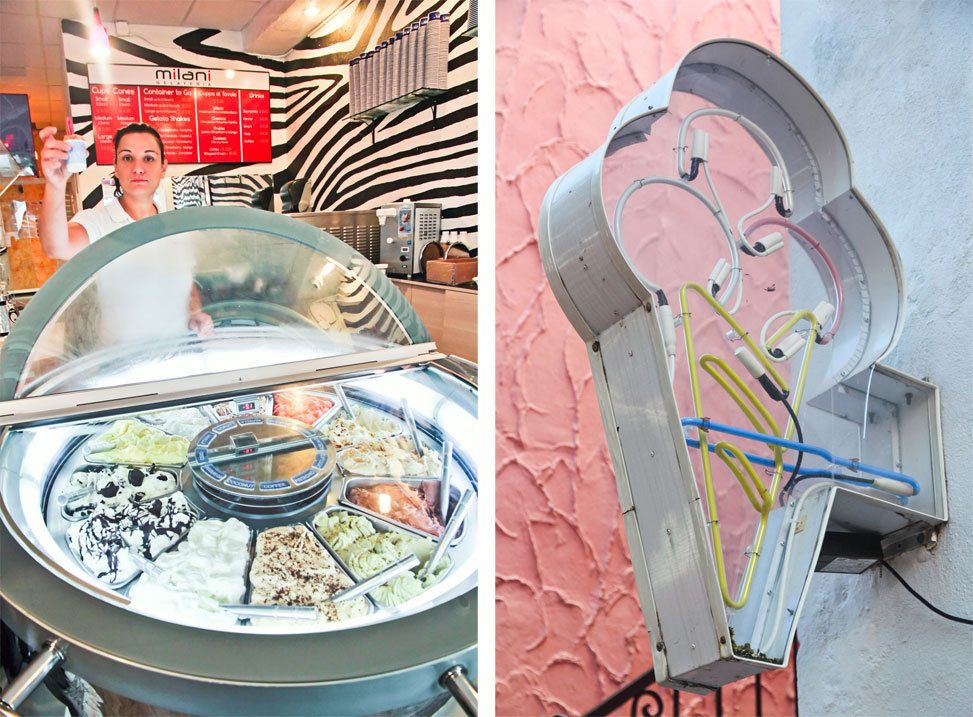 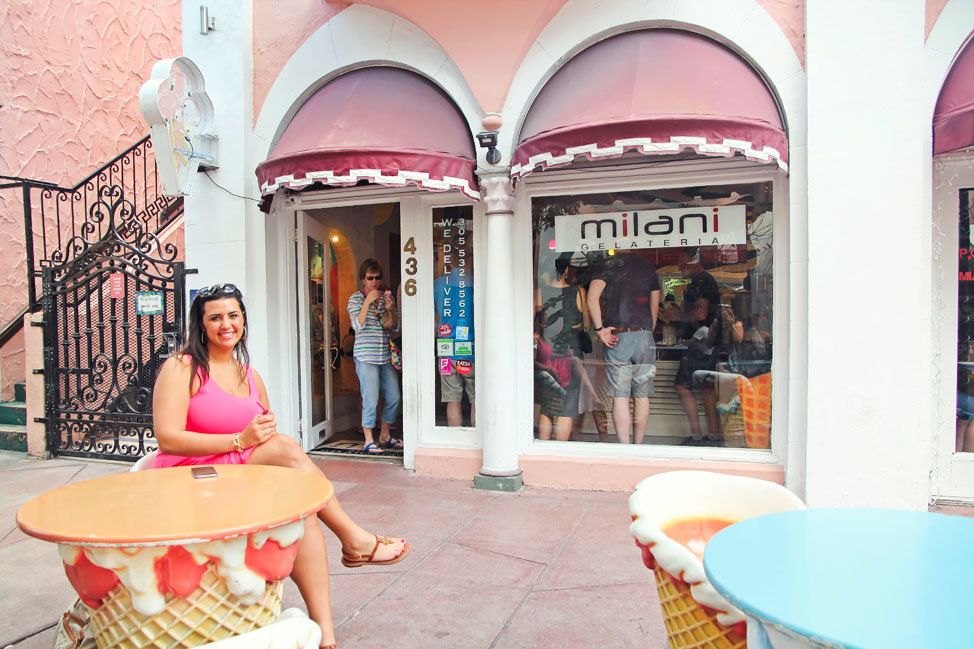 Conclusion? We loved this tour. Our guide was fantastic, the food was unreal, and it served up the perfect combination of culinary indulgences and mini bursts of exercise, with a side dish of Miami history to keep things interesting. It was so good, I basically want to do it all over again — I am already looking forward to ticking off the Little Havana and Wynwood versions on future trips to Miami. 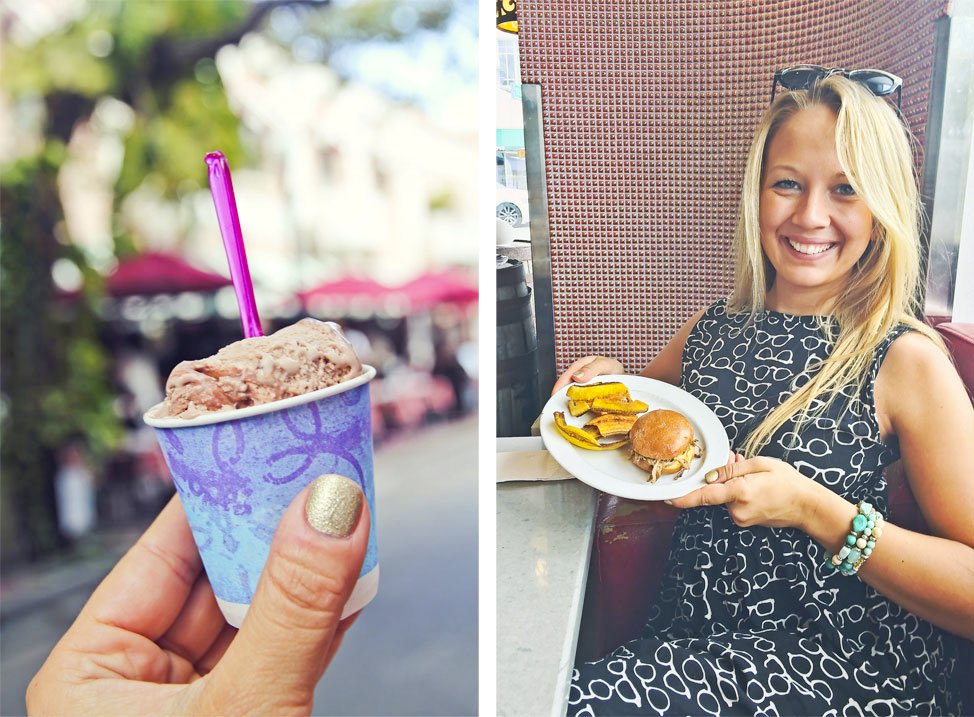 Is there a food tour you’ve loved somewhere around the world? Is there a Miami restaurant I need to know about? And most importantly, how devastated are you about Dexter!?

See you in the comments — and stay delicious, Miami!

A Day Trip to Stanley, Idaho

Running for Rochester: My first 10K!

Photo of the Week 199: Belize Miles Over Miami: A Sightseeing Flight of South Beach
53 Comments...