Miles Over Miami: A Sightseeing Flight of South Beach

Let me just preface this by saying that I didn’t mean to become the blogger obsessed with air tours. It just kind of happened.

It all started many take-offs ago in Las Vegas, when I decided an aerial view of the city’s neon lights would be the perfect birthday kick-off. Then came Hawaii, where the only way to spy red-hot lava was from the seat of helicopter. The only way, you guys! In Peru, my friend Zoe dared me to fly over the Nazca Lines, and I just couldn’t say no. Later I found myself back in Nevada, and realized the only way to top my first Grand Canyon experience was to literally top it. And recently I found myself in New Orleans, where my sister giddily expressed interested in seeing her new city from above. 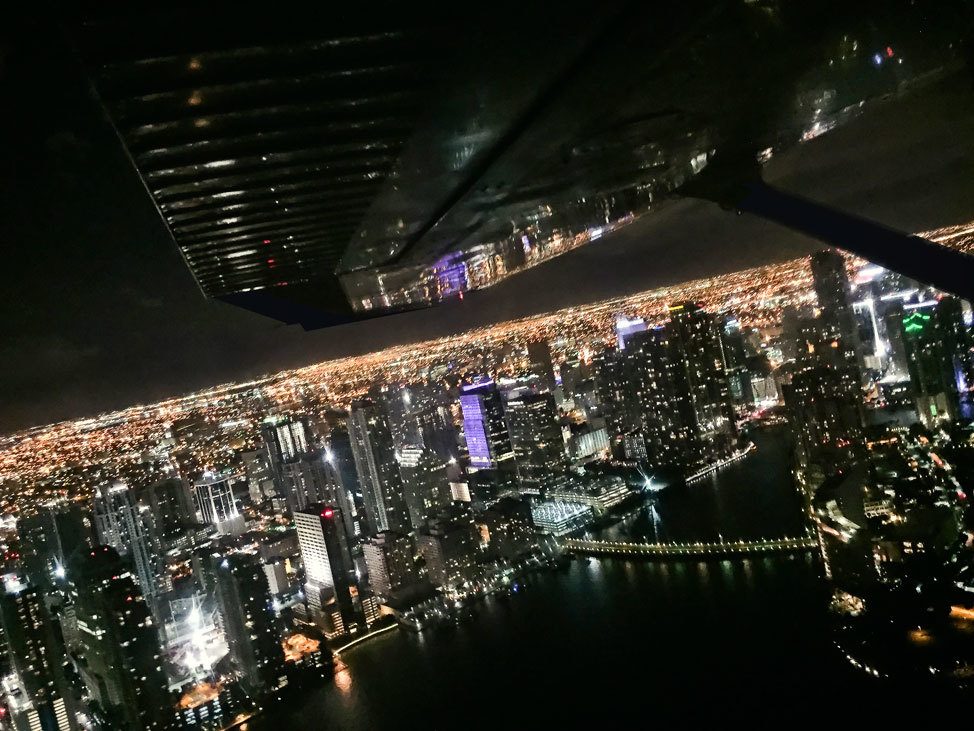 So, you see, it was kind of an accident. But, now being a bit of a flying aficionado, I couldn’t help but think that the perfect way to celebrate my girl Michelle’s first trip to Miami was to take her on a sky-high spin above it. 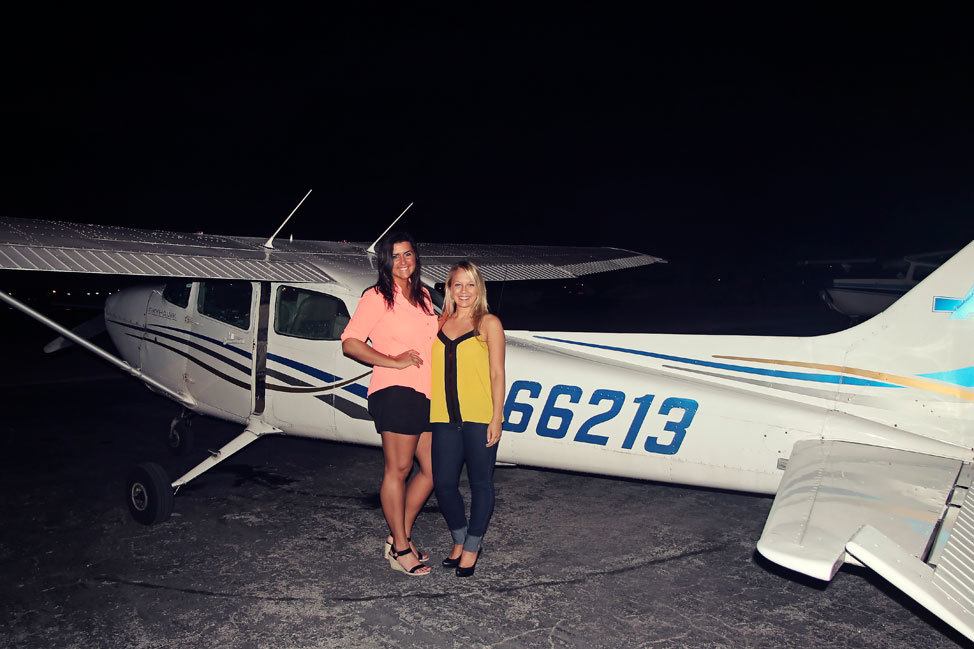 When we arrived at North Perry Airport, about thirty minutes north of Downtown Miami, we were greeted like old friends. The charming guy at check-in joked that he was going to work on switching shifts with the pilot on duty to take us up himself, and pleasantly taking endless plane-side glamour shots with our multiple cameras. Later, the patriarch of this charmingly family-run business came out to introduce himself as well, and after a chat about where we were from and what we were doing in Miami, he pressed his card into each of our hands, assuring us in thick Italian-American accent, “We’re New Yorkers too, you know. God forbid, anything happens to you down here, you just don’t hesitate to give us a call. You’ve got friends here now.”

It was such a warm, sincere gesture I felt a lump rise in my throat.

The sky was inky black as we took off, and I calmed the familiar jitters in my stomach by chatting to our pilot about his extensive aeronautical engineering career. Soon, however, the conversation turned to the beautiful sights below, starting with the Fort Lauderdale skyline. 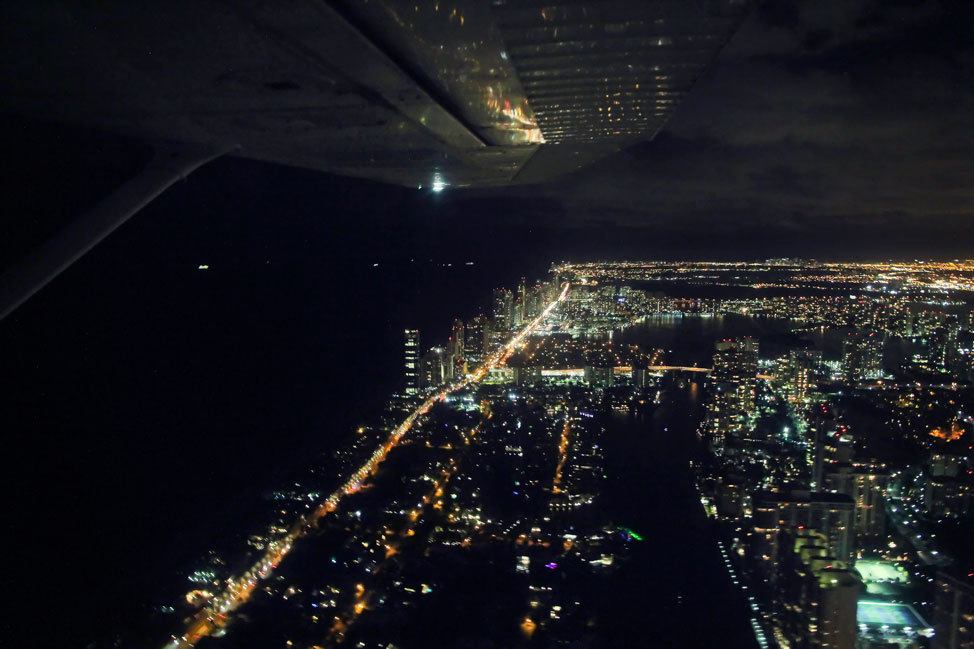 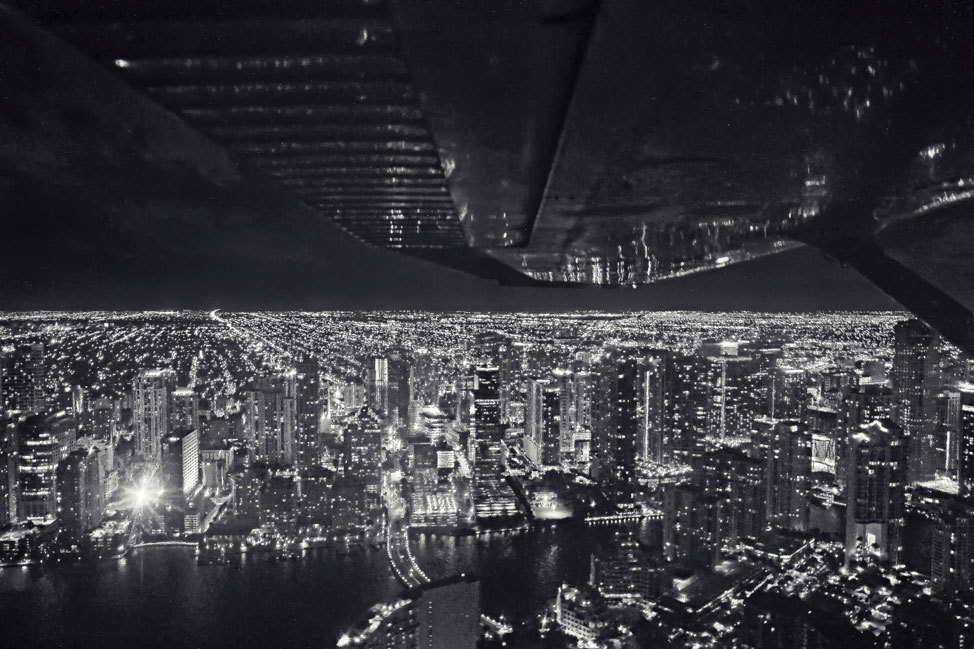 One frustration on this tour was that I found picture taking extremely difficult — it was later at night and therefore darker than my New Orleans tour had been, and there was less ambient man-made light than in Las Vegas. Eventually I resigned myself to putting down the camera and just enjoying seeing the sights from not behind a lens. 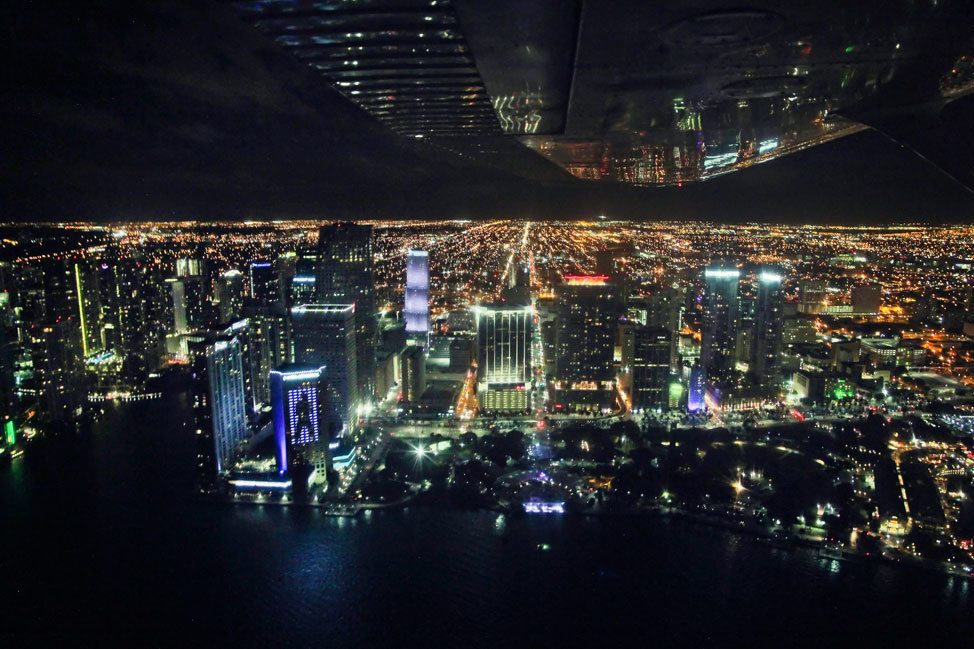 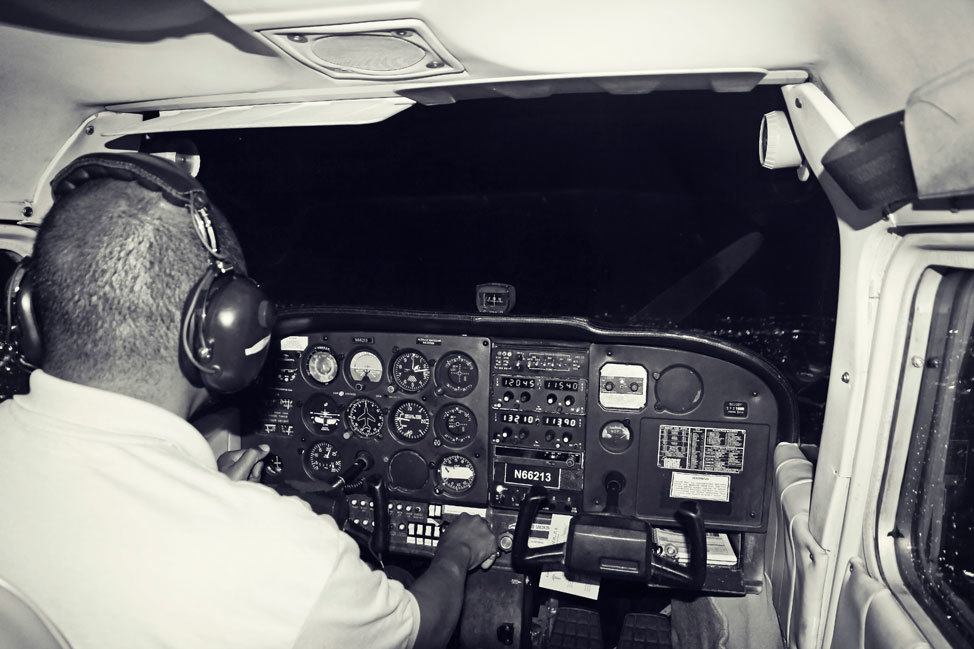 From the air, we excitedly caught peeks of both my cousin’s downtown apartment building and the stretch of South Beach where we’d stayed. Our pilot also pointed out additional sights, like — I kid you not — Ricky Martin’s Miami Beach mansion, topped in a dome that pulsed with technicolor lights.

We were able to get a full lay of the land, and I felt like I understood the layout of ribbon-like Miami Beach with new clarity. 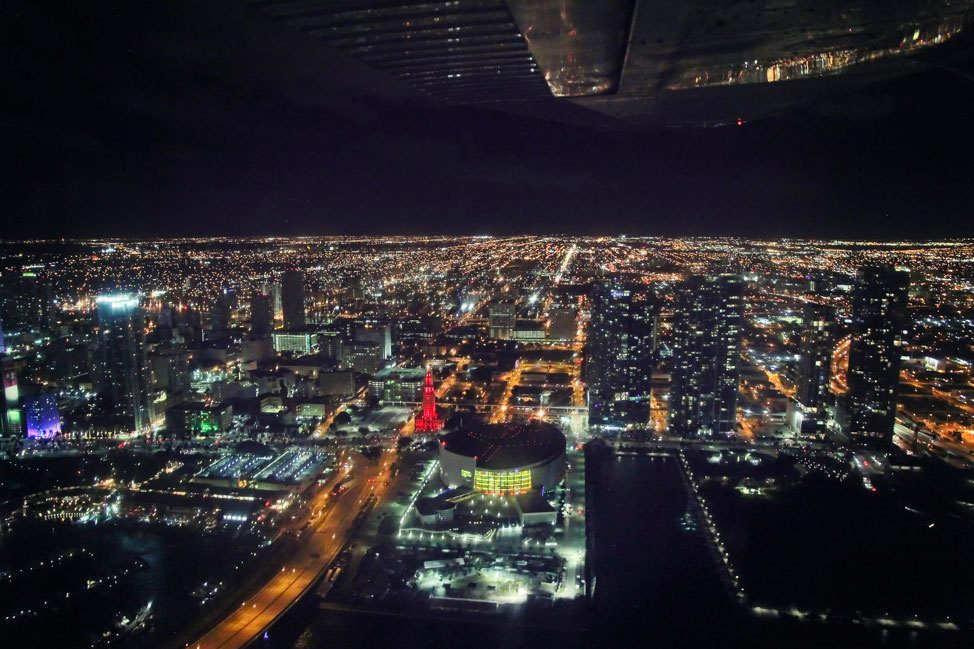 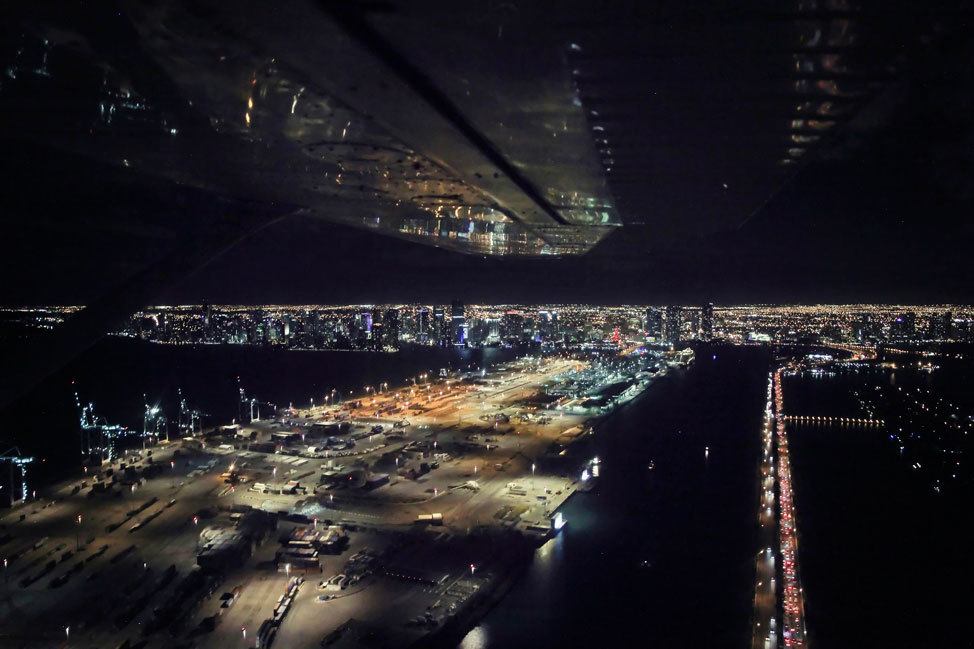 Soon, we were back on the ground and giggling from the adrenaline rush. Waving goodbye to our sweet new friends, we were ready to take on the night.

Driving back to Miami, I mused that both tours I took this trip were huge successes based on the fact that I basically plan to repeat them on my next trip to Miami — I’m already looking forward to the Wynwood or Little Havana version of the food tour I took, and I’d love to fly above Miami for a second time in broad daylight and appreciate the various turquoise hues of the ocean.

My only hesitation in recommending this amazing tour is that it’s best for those with their own wheels. We extended our road trip rental for this reason, as an hour-long round trip cab ride outside Miami to the North Perry Airport certainly can’t be cheap. 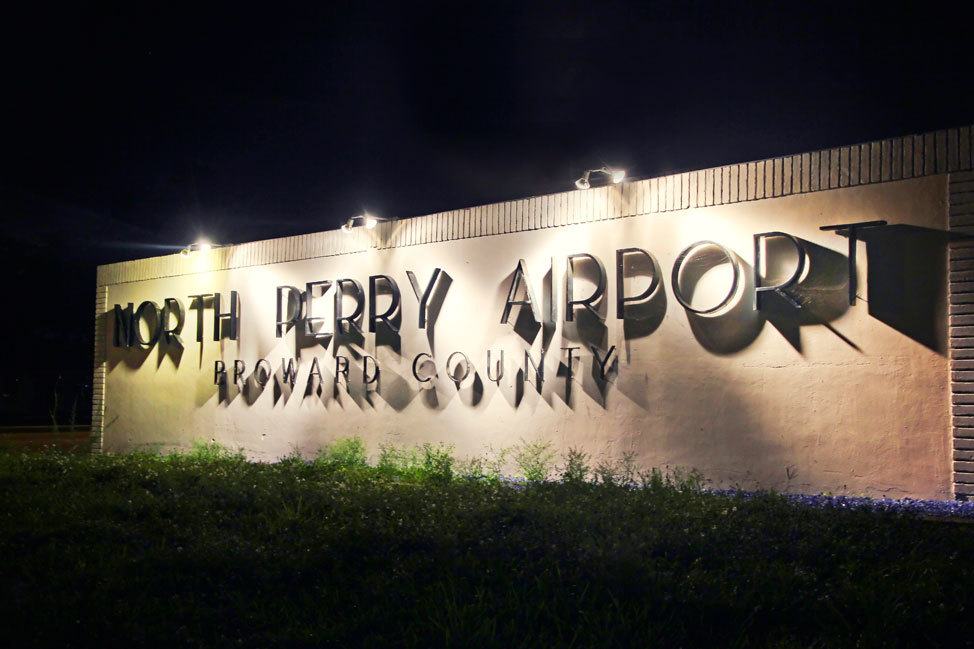 Miami, I’ll be back soon. 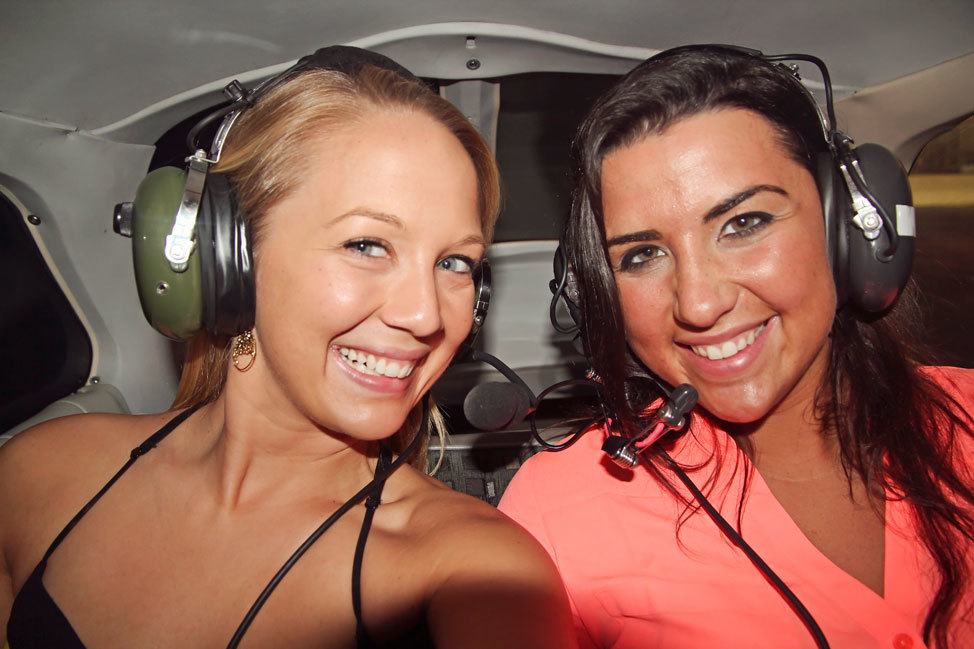 What’s one city you’re itching to fly over? My next conquest, I hope, is New York City!