Our time in Greece was over, but that didn’t mean our cruise was. We had one more stop before disembarking in Istanbul, at the port town of Kusadasi. 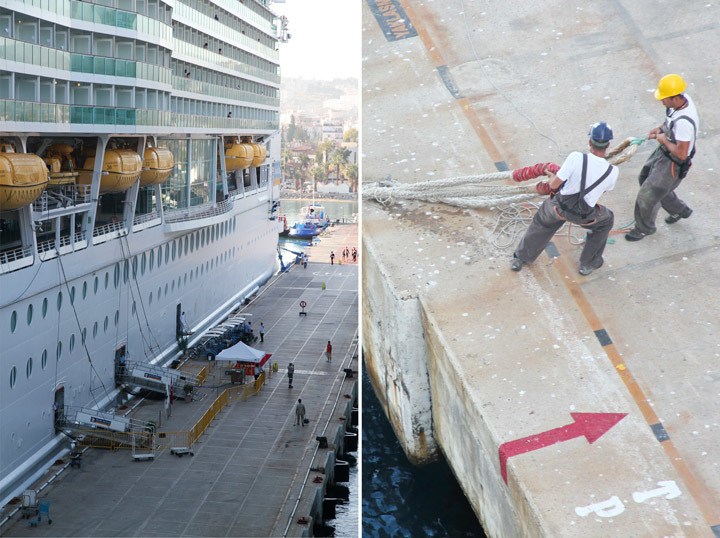 Our ship docking next to a behemoth one

Kusadasi itself didn’t receive rave reviews- and by that I mean people refer to it as a total dump. The real reason for visiting is easy access to nearby ancient city and archeological site, Ephesus. During the Roman period Ephesus was the second largest city in the world (after Rome) and swelled to 250,000 people during the 1st century BC. Like we did in Mykonos, in order to use our onboard credit, we booked a ship based tour of Ephesus and the nearby Virgin Mary’s House. 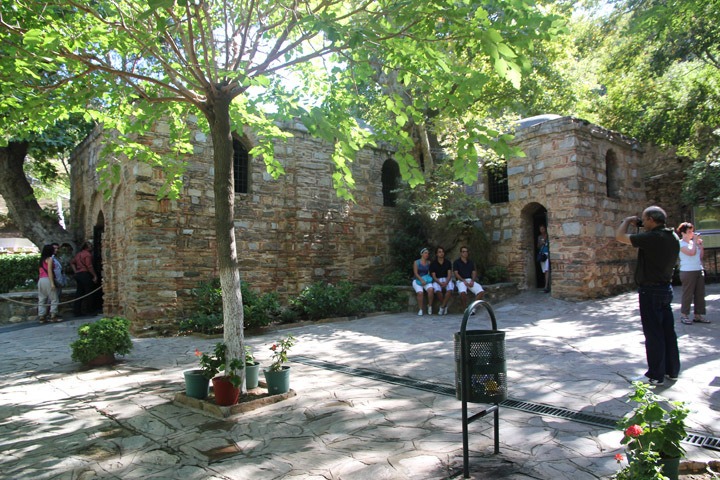 The house was found in the 19th century after following the dreams of a visionary nun all the way over in Germany. Good thing people listened to this chick, because these days when someone calls in to Nancy Grace claiming to know the location of a dead person, they go to commercial break. 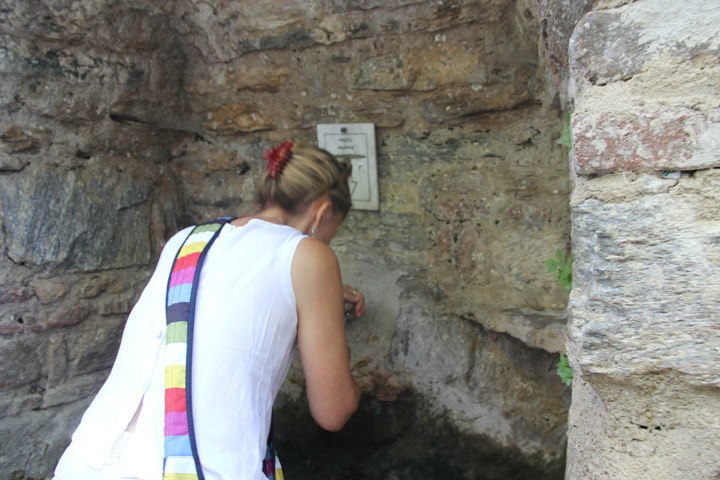 Other than reading the signs of the “many evidences” proving that the Virgin Mother did once dwell here, its a pretty quick visit. We balked when our guide told us to meet back at the bus in twenty minutes, but it actually kind of was enough time. The house is made of stone and looks and feels more like a church than a house. It’s also incredible small and without signage so walking through takes about 30 seconds, plus another 30 seconds of trying to feel virtuous but actually wondering how two people could live in a room so small (oh yeah, Saint John was there too. What wild parties those two must have had!) 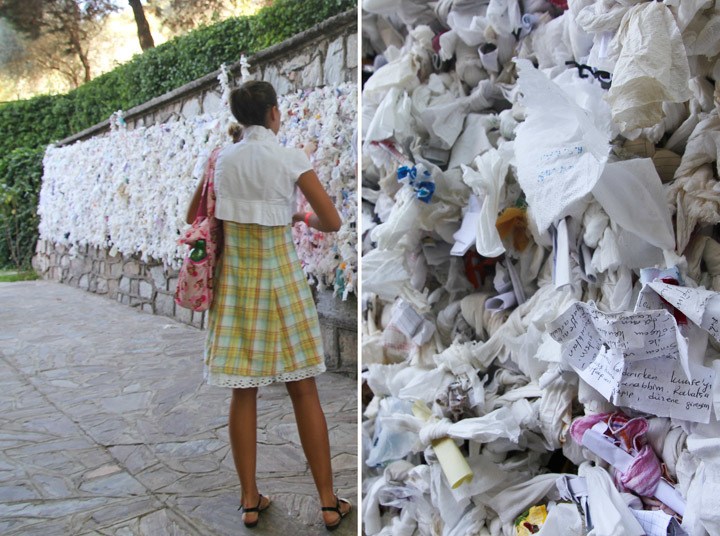 Two fun points of interest on the way out are the “Water of Mary” fountains where a salty water with supposed curative properties can be tasted. Then you will pass a wishing wall, where people’s prayers are scribbled on napkins, boarding passes, the backs of school photos… The artist inside of me loved this part as a pious version Postsecret. 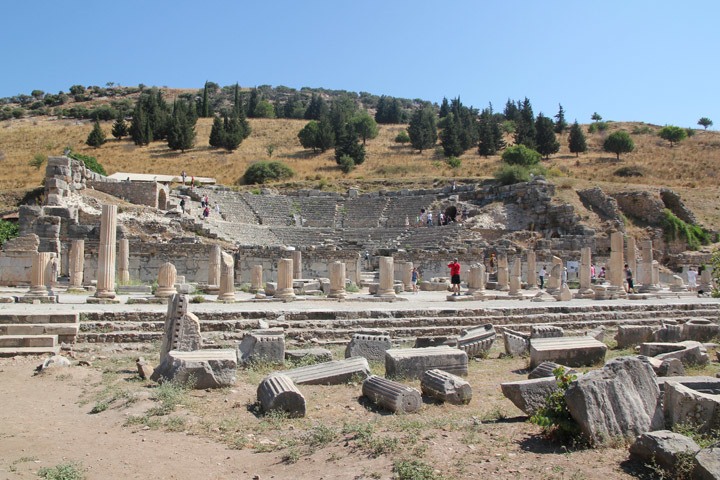 Our next stop was Ephesus, where we quickly realized we loved the commentary we were getting but didn’t love being rushed  from place to place with barely enough time to squeeze a photo. 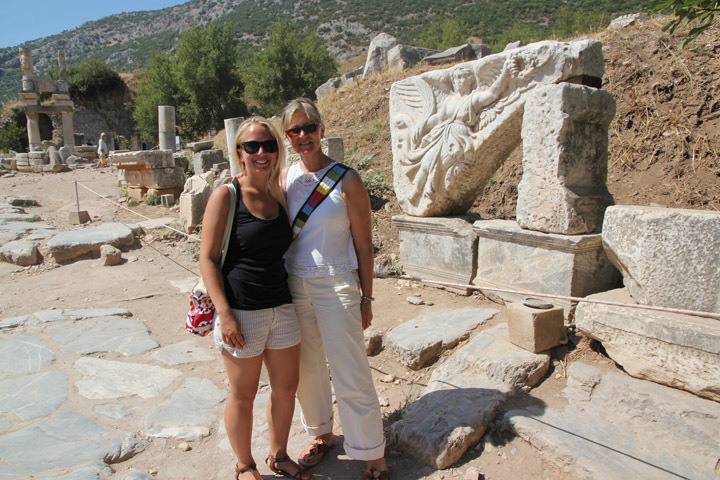 Ephesus is a major tourist attraction, and we were visiting during peak season. So luckily we hadn’t been expecting to have the place to ourselves. 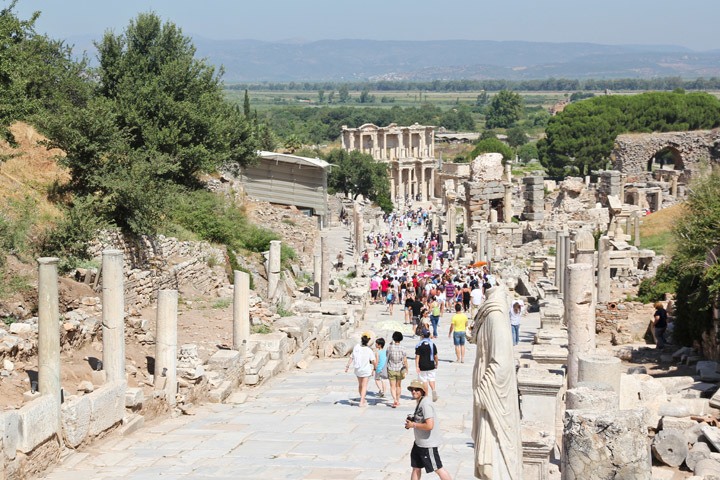 Despite the crowds, I managed to get a few photos I was quite fond of, such as the two below. 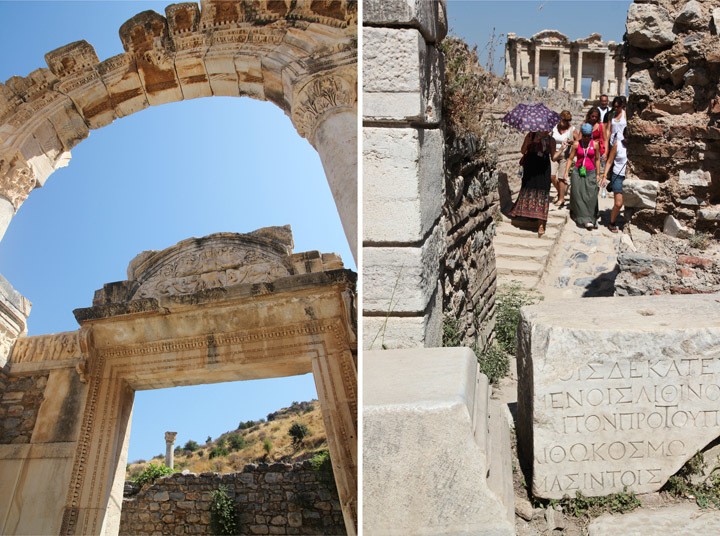 The benefit of going with a guide is hearing the stories you would never find out about otherwise (unless you, you know, read a guidebook). One such story was of the public toilets, pictured below. There was an admission fee, which in part went to subsidize the live musicians in what was apparently an incredibly posh affair. Indoor plumbing? Check. The concept of privacy? Non existent. 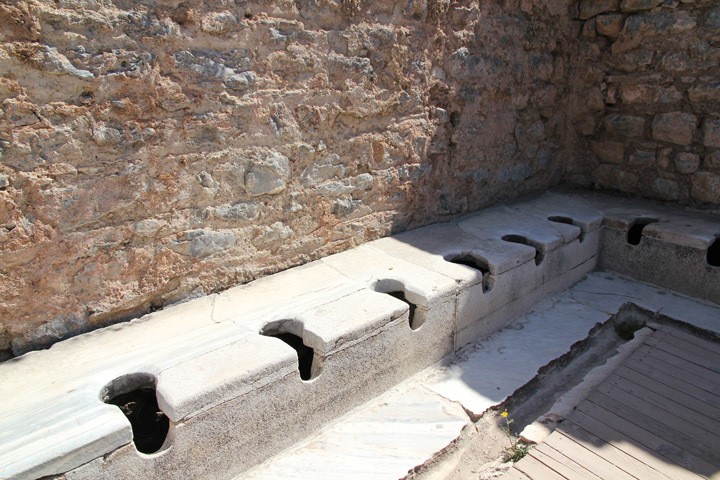 The crowning jewel in the Ephesus crown is the Library of Celsus, pictured below. The literary treasures that once filled this library have been lost to history. Local legend states that when Mark Antony conquered the city he gave all the books as a gift to Cleopatra, who put them into the library at Alexandria where they were victims of fire. Shame he didn’t stick to jewelry. 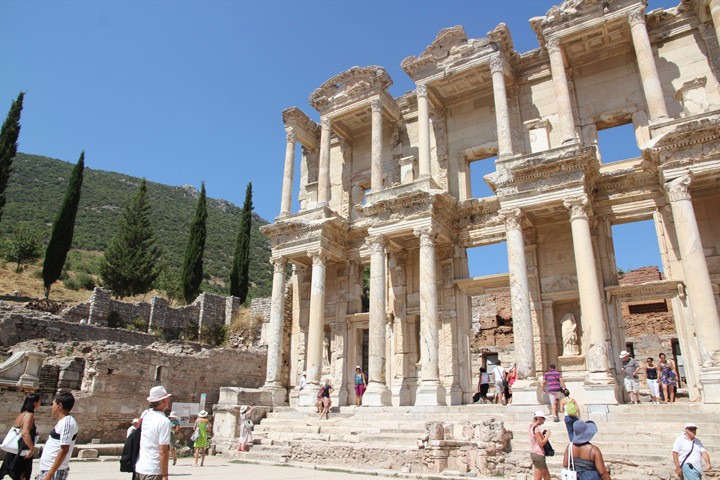 On the way out of the ancient city, we were greeted by a super cheesy little “historical” performance which was mildly amusing but mostly just weirdly out of place. Ephesus is an impressive, beautiful site. It’s one of the Seven Wonders of the Ancient World! But that popularity comes at a price, including huge crowds and big tour groups. It would be nice to go with a guide to get the history but then be allowed the time to explore the grounds at our leisure. As my Mom said and I named this post after in homage, “I felt like we were sprinting through Ephesus!” 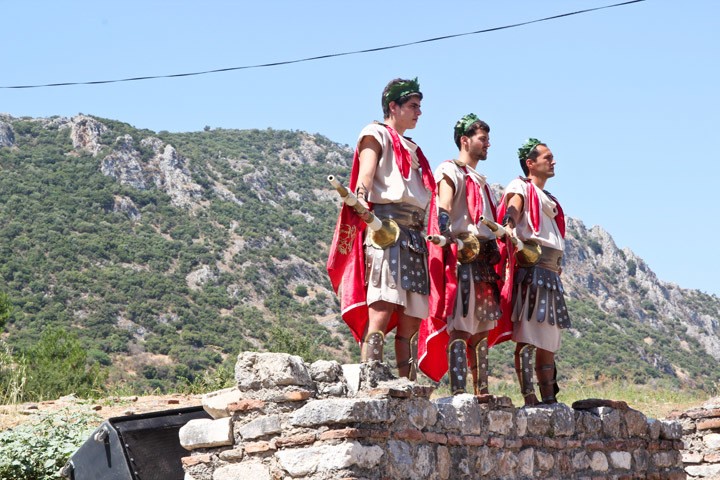 But of course, we had to make time to be brought on a forced and unplanned visit to a rug shop! Can you sense my sarcasm? I was pissed when we pulled up here, knowing that it’s a common scam and that we were rushed through the part of the tour that we paid for. But in the end I grudgingly admit that if you could take away the sales pressure, it was  a pretty cool experience. I guess its a right of passage for tourists to Turkey. 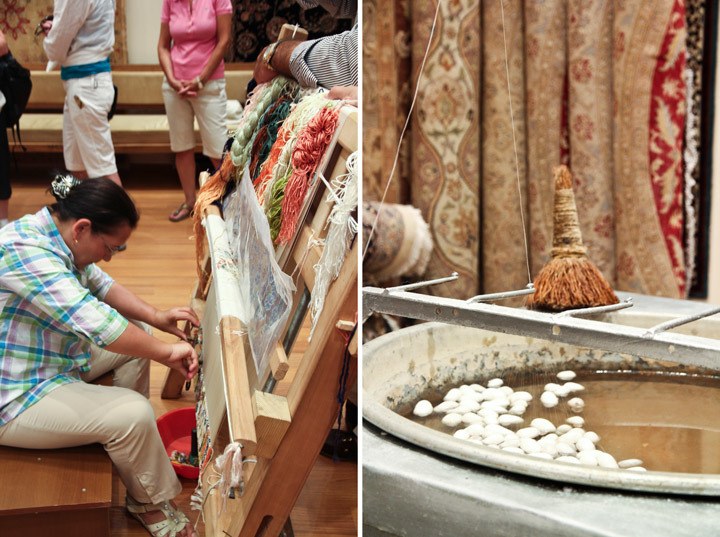 After the tour was over, we spent about 5 minutes trying to walk through Kusadasi town before we ran screaming back to the boat to escape the over aggressive salespeople trying to lure us into their rug and gem shops. But our time in Ephesus wasn’t over. Silversea, in one of the touches that nudged us over to the small cruise line, arranges for one complimentary “experience” on each of it’s cruises. For us, it was a private classical concert at the ruins. 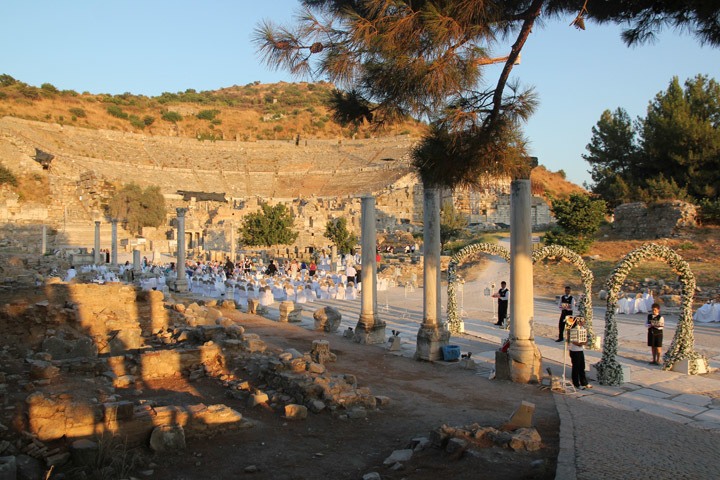 The ruins were at this point closed to the public, so we experienced it in a totally different way than we did that morning, battling the crowds. Unfortunately the actual theater is under renovation so we were seated at the base instead. In the past, bands like u2 have played sold out shows here, and hopefully will continue to in the future. I can’t imagine a better venue. 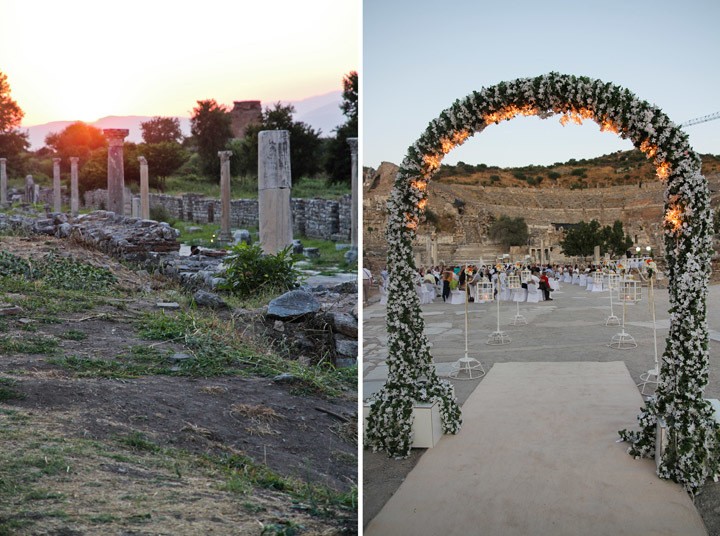 It was impossible to capture the evening, but that didn’t stop me from trying. I completely failed at my goal of taking loads of video on this trip (my mom did, but I forgot to get her footage before we parted ways!) But at least I got this. 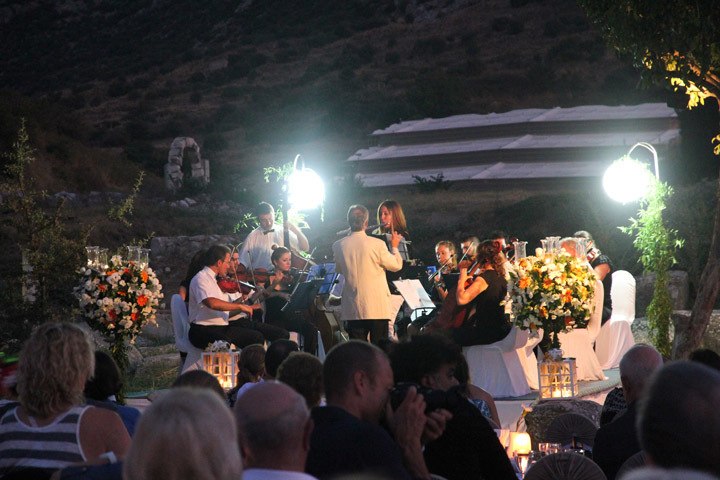 When we returned to the ship, we couldn’t stop laughing at the cheesiness that was waiting to greet us. The entire butler staff, lined up with “Welcome Home!” signs. (Because we were gone for so long!) My mom and I assumed that the poor staff was probably hating their lives at this moment, but they did a great job of hiding it. It was a cute way to end our last port excursion. One day at sea, and we were back to dry land in Istanbul! 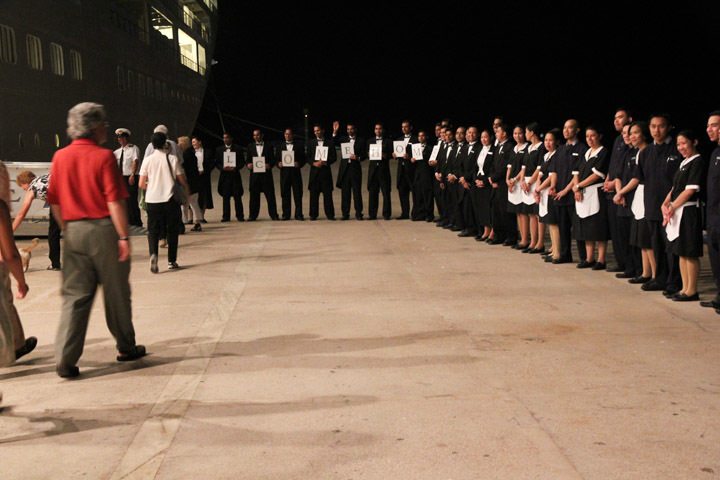 To see all of our Kusadasi photos, visit the Flickr set here.

Photo of the Week 15 Reflections of A First Time Cruiser
12 Comments...