Confused on where we are? I’m taking this moment while my travels are grounded to care for my mom to catch up on my black hole of un-blogged content. Here, I’m covering my time in Thailand from March through May of 2017. My apologies for any confusion with the timeline, and thanks for sticking with me.

Long time readers know that festivals are one of my favorite reasons to travel. From Burning Man in Black Rock City to Tomorrowland in Belgium (and Brazil!) to Equilibrio in El Salvador, I’m always down to get on a plane and immerse myself in the next wild festival experience.

But to get to experience a festival right in my own backyard? Now that was something special. 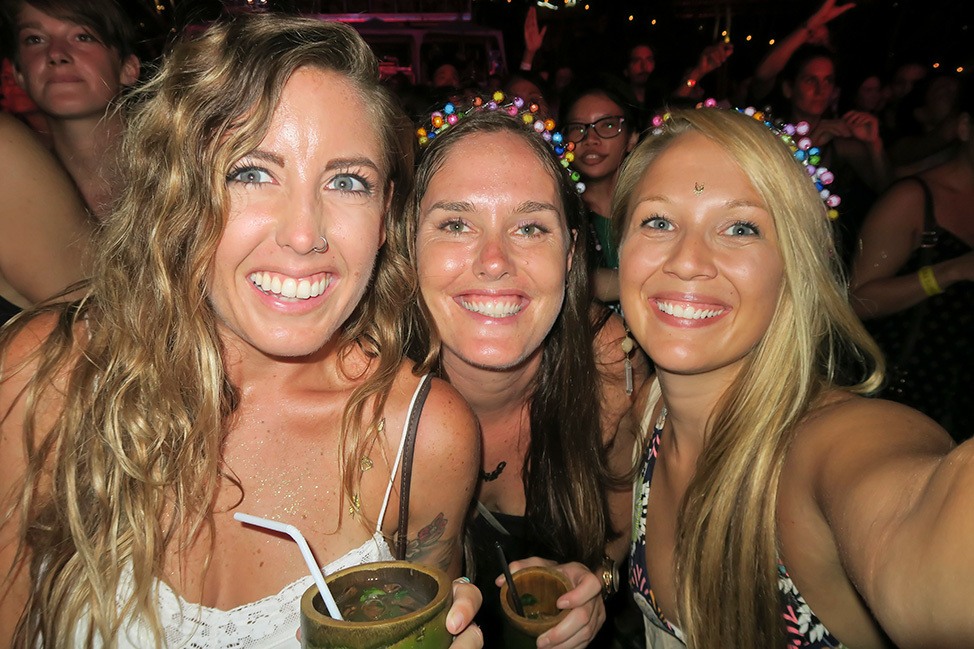 I couldn’t believe my luck when I went to Wonderfruit in Thailand — an insanely beautiful, regional-burn-esque festival in my adopted home country? Shortly after, Tao Festival was announced, and I marveled. An actual, three day music festival right on my teeny little island home of Koh Tao? This was going to be epic!

I also had a festival in neighboring Koh Samui on my calendar, leading me to label it the official Year Of The Thai Festival… at least around my apartment, though that one was rescheduled and rearranged so many times and with so little clarity, I was eventually unable to attend. Ah, Thailand. 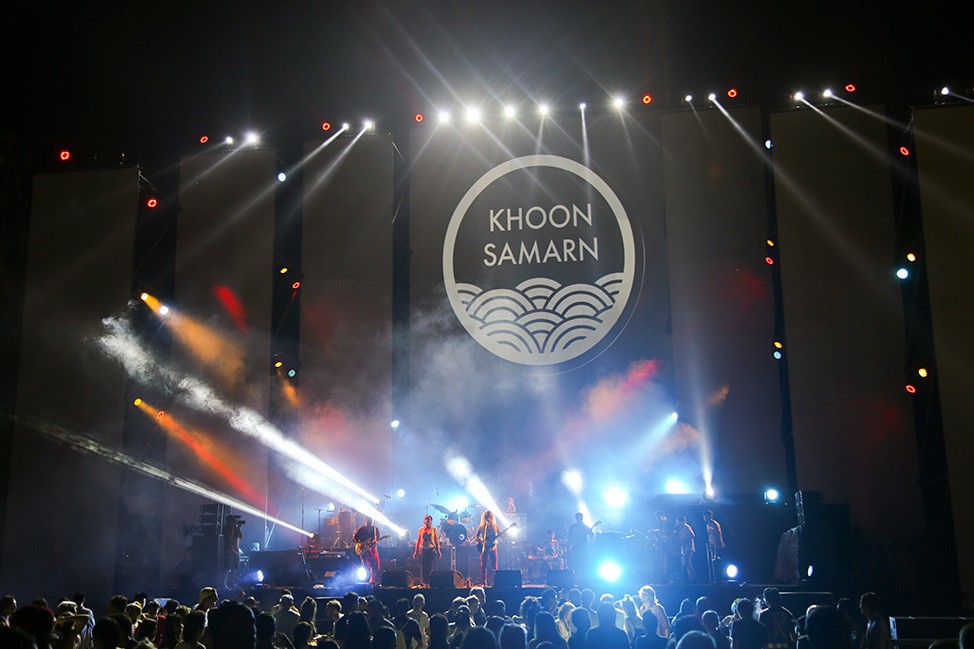 The more I heard about Tao Festival, the more excited I was. An incredible design team was pushing out beautiful posters and marketing materials with incredible graphics, there was a strong ecological component, there was a wild lineup of Thai, Burmese, and international artists, and freaking Arrested Development was headlining. There were to be free beach parties during the day on Sairee Beach, and ticketed evening lineups at a remote festival ground being constructed near Sai Nuan Beach in the island’s southwest. Heck. Yes.

At 3000B for three nights or 15000B for one night, with discounts for expats and locals, it was a pricey event by Koh Tao standards. But it was worth it. 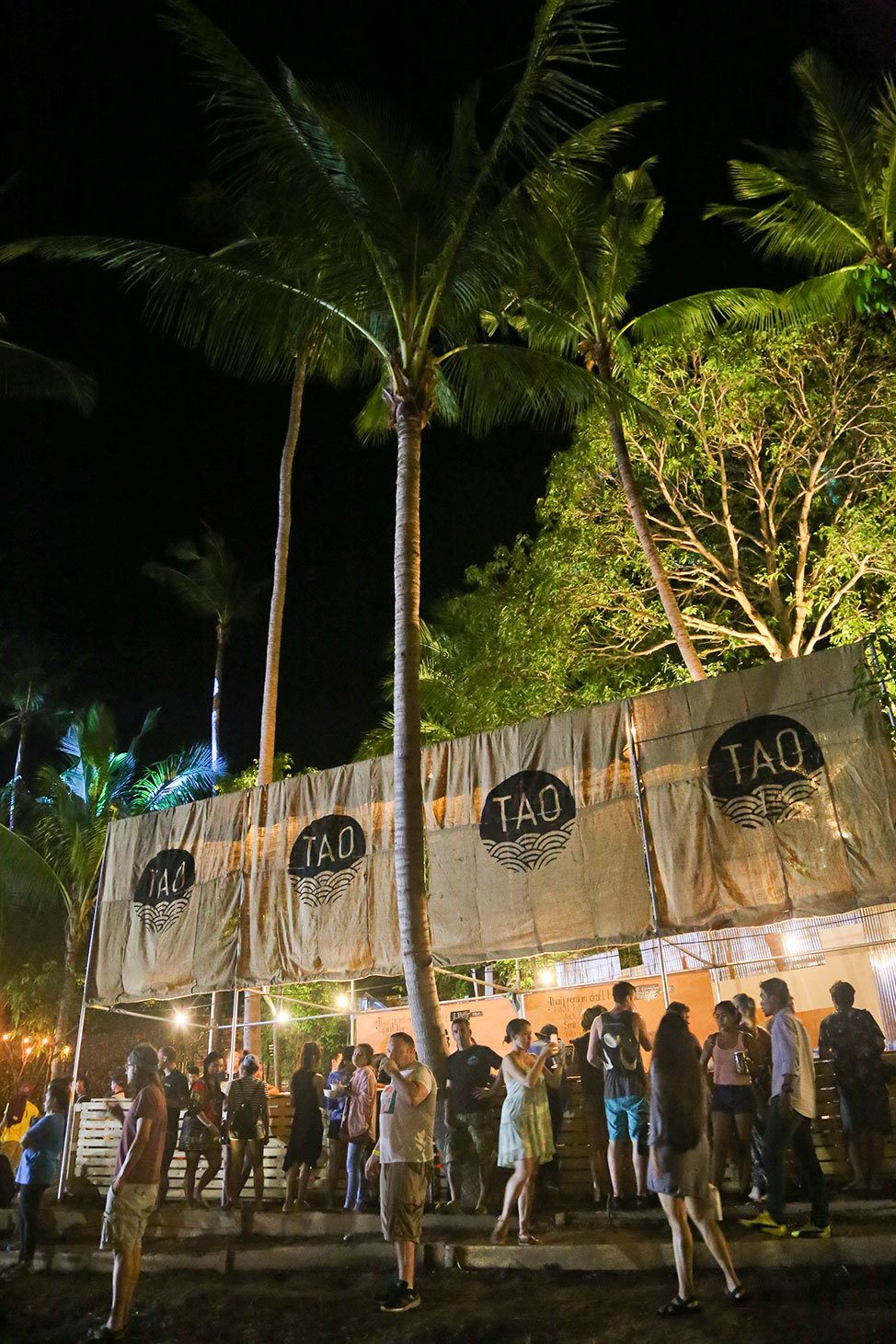 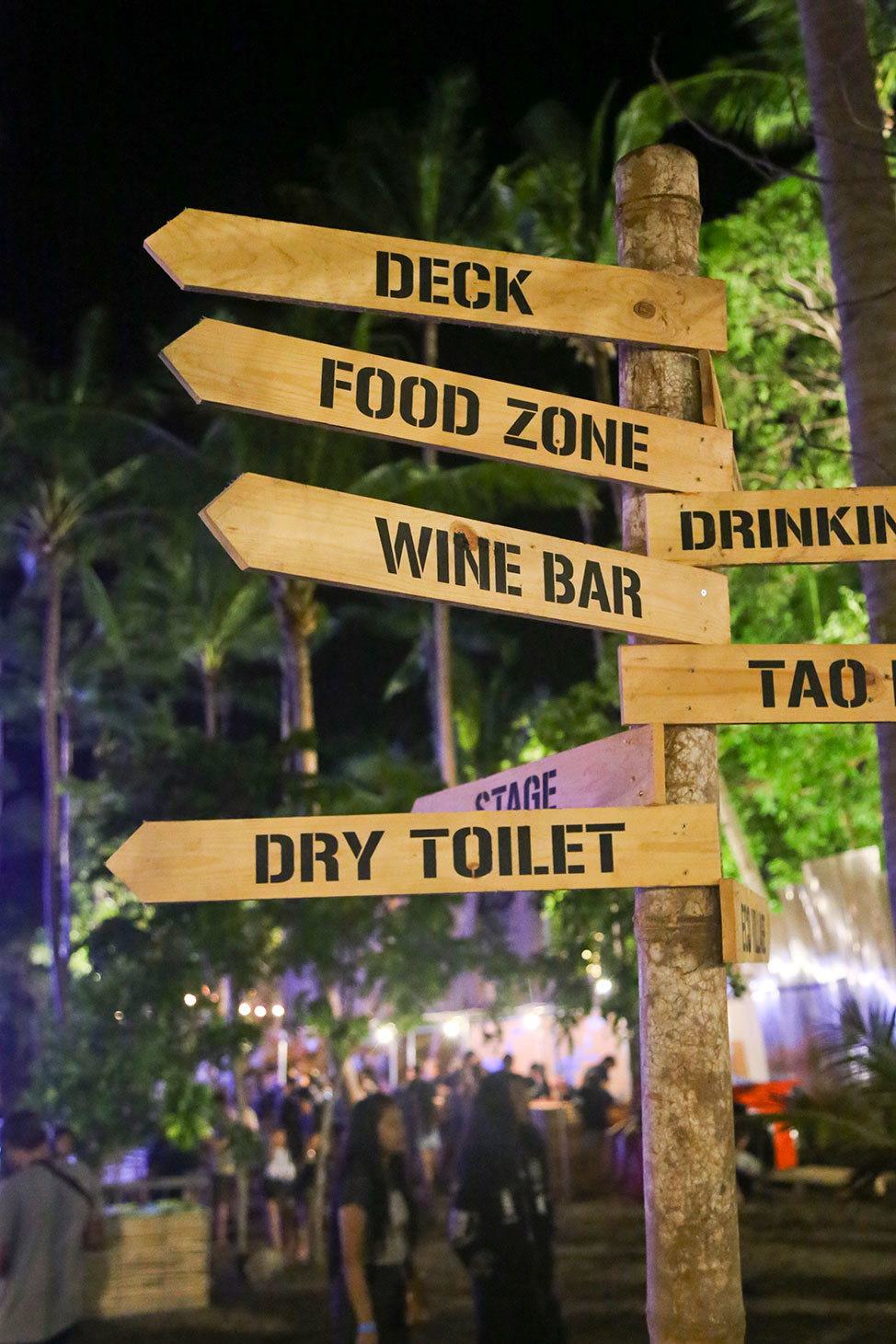 Most of my friends were pumped to go see Arrested Development, the headliners of the third night of the festival. However, my friends Janine and Gemma were also keen to see Srirajah Rockers too, who Janine and I had discovered at Wonderfruit, and so we made it into a two night event.

Since we weren’t having a huge night that evening we just drove ourselves down to Sai Nuan. Parking and getting on the shuttle was a bit of a production — and would be even moreso the next night when the size of the crown doubled — but my mind was actually blown when we finally walked into the festival. This was insane! This official after-movie has some great drone footage of the stage, where you can really see how it just bloomed out of the jungle (and spot tons of my friends!) 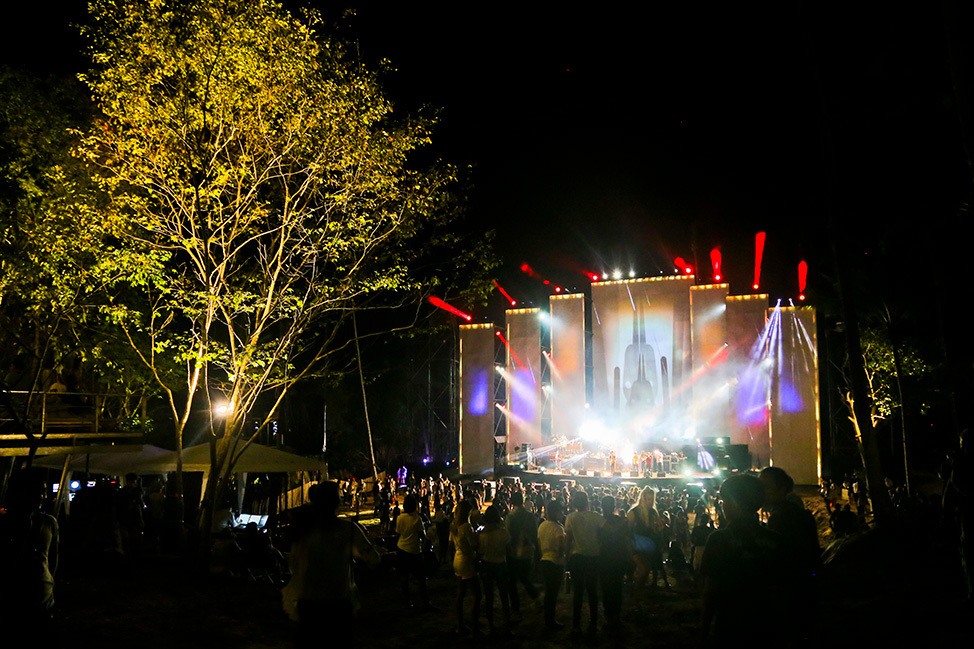 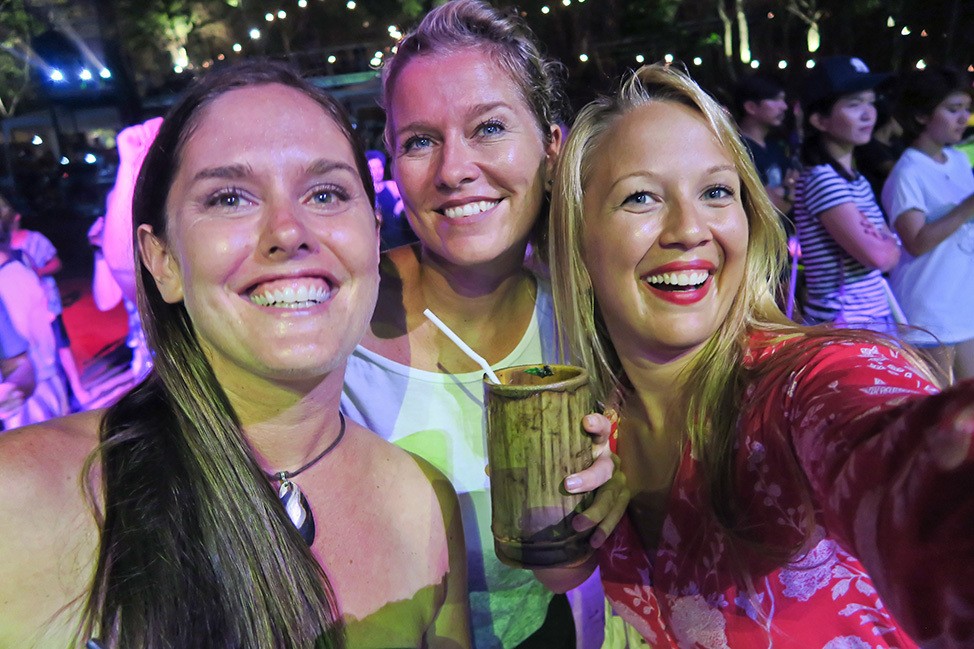 Srirajah Rockers were just as good as we remembered and we joked about running off to become groupies and follow them all over Thailand. (Which frankly, is a plan I don’t hate. Janine?) 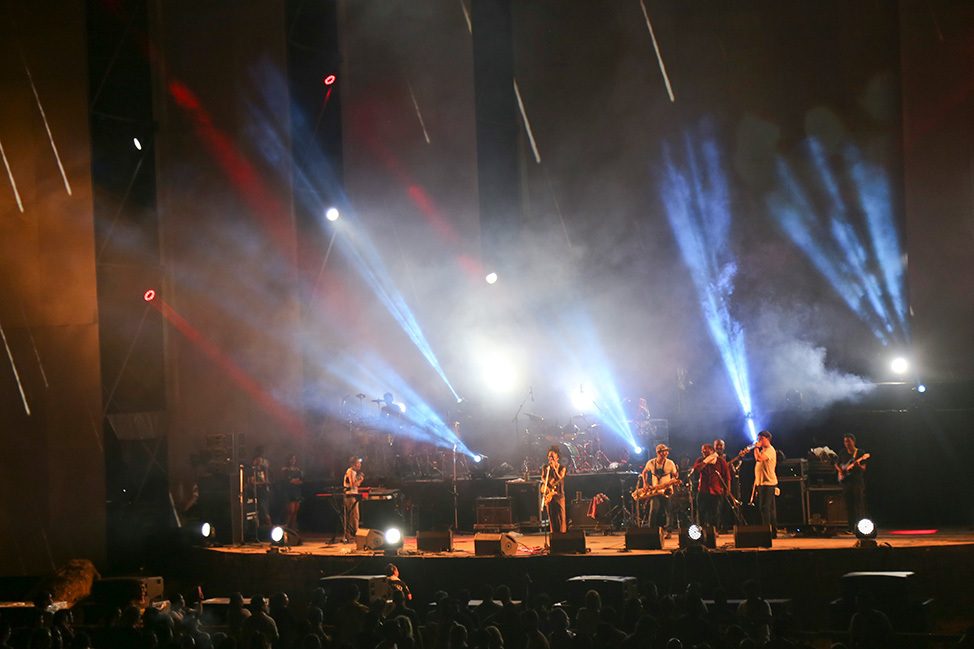 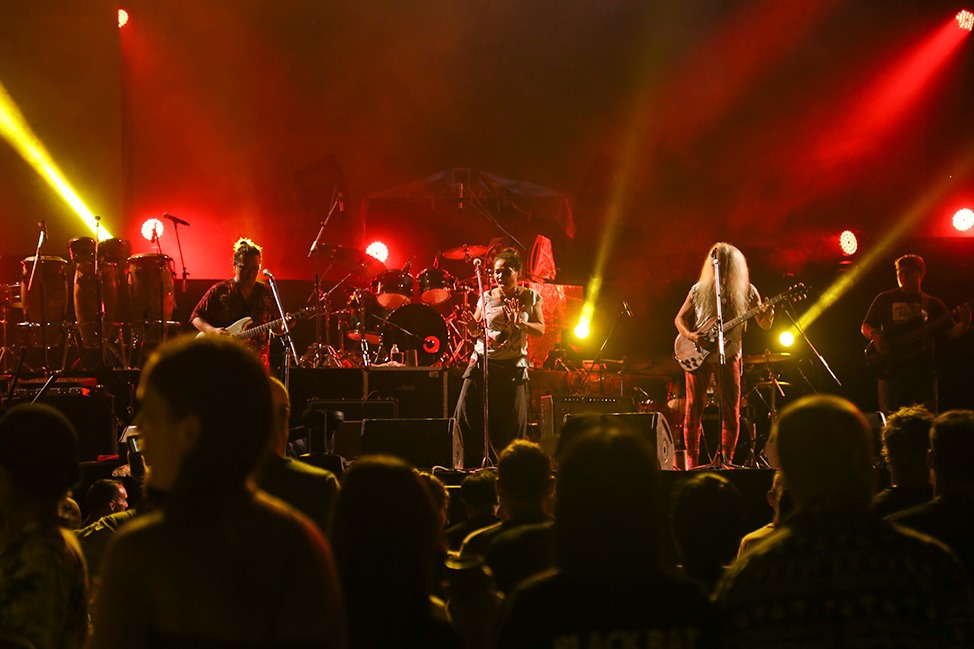 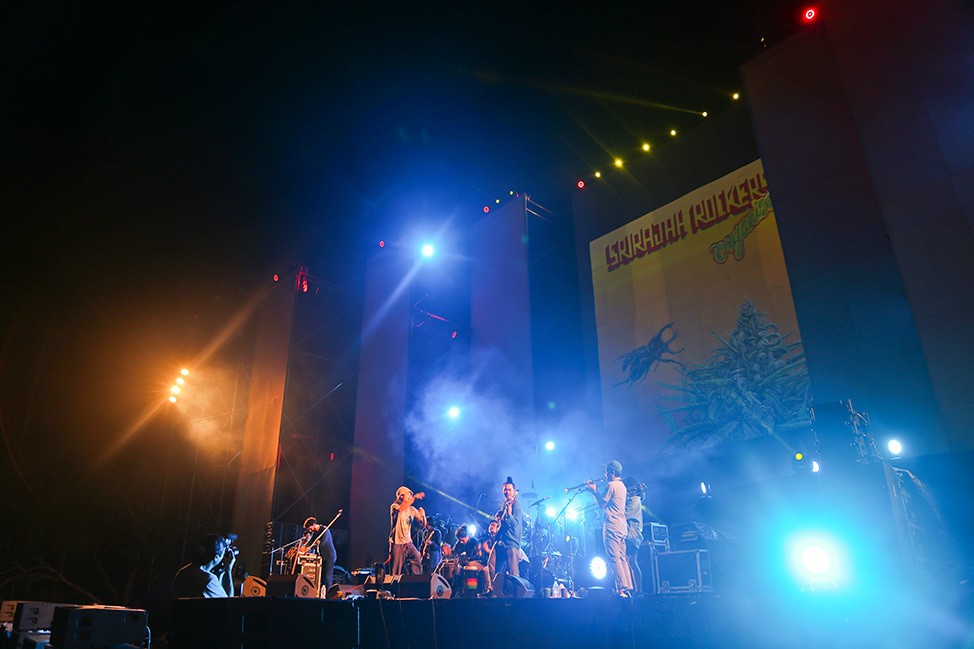 The next day was the big one! We got all dressed up in the afternoon and headed to the free daytime party at Sairee Beach, where there was paddleboard yoga, freediving documentaries being screened, and, well, everyone I knew on Koh Tao standing around talking about how wild it was that this was happening on Koh Tao. 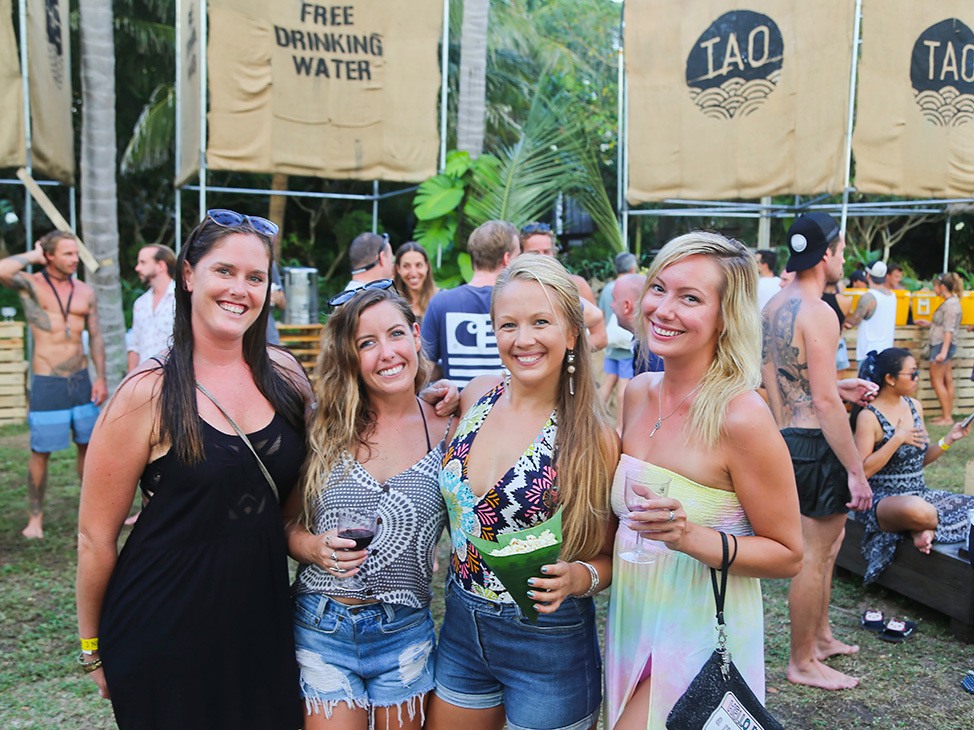 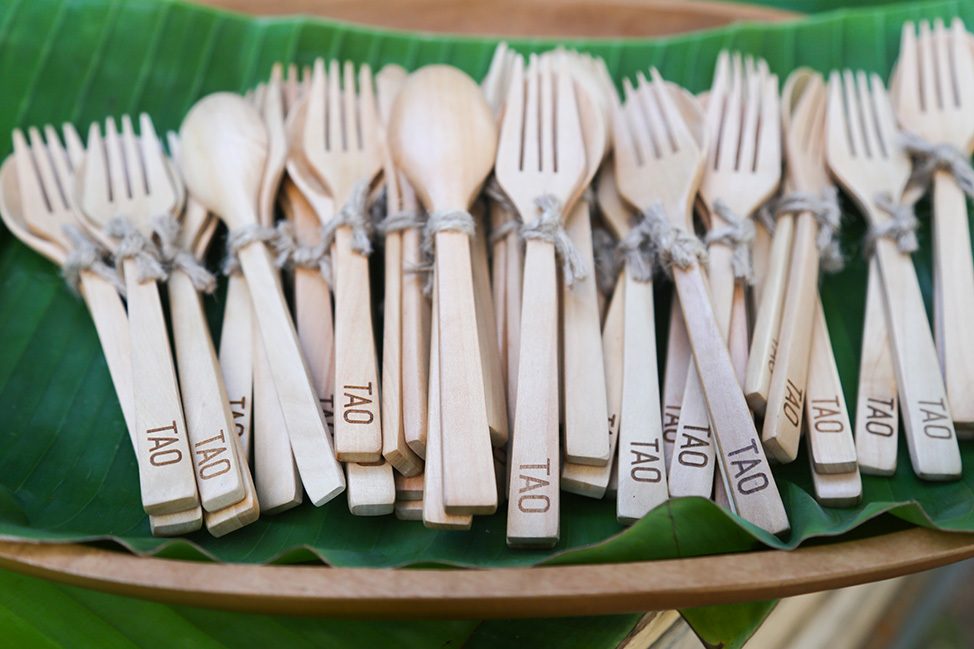 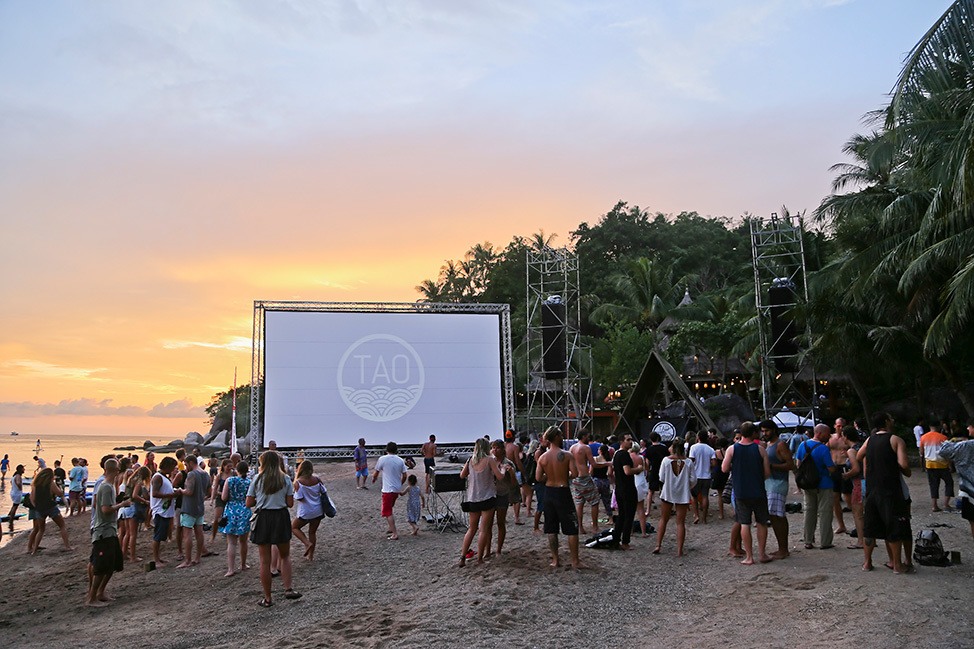 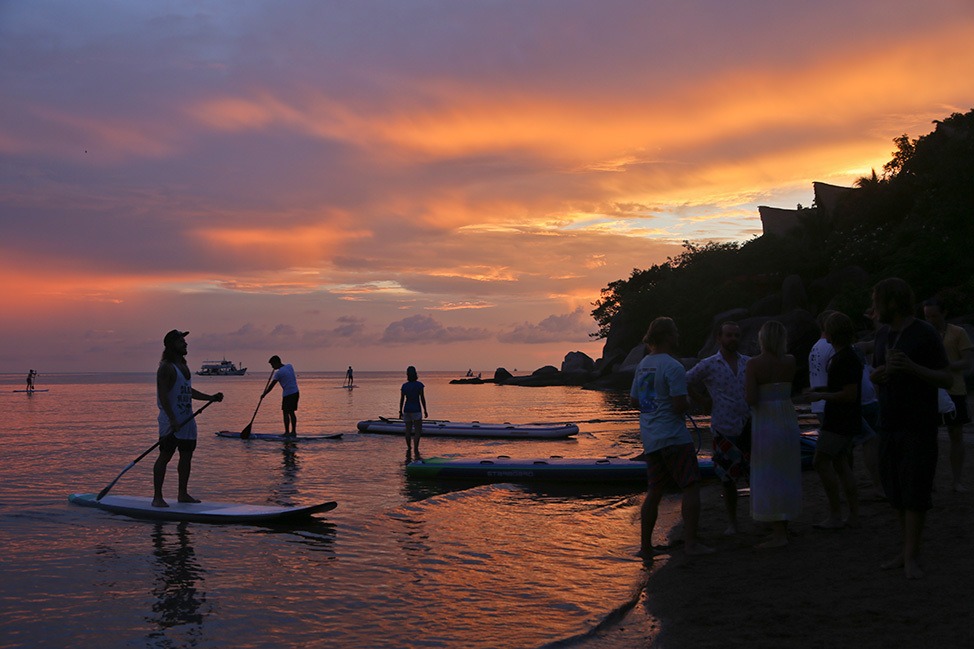 Then, after the requisite warm up party at Banyan, it was time to head back to Sai Nuan. This time we all took taxis and then had to queue for the shuttles, so it was a big more of a production, but we got there eventually. 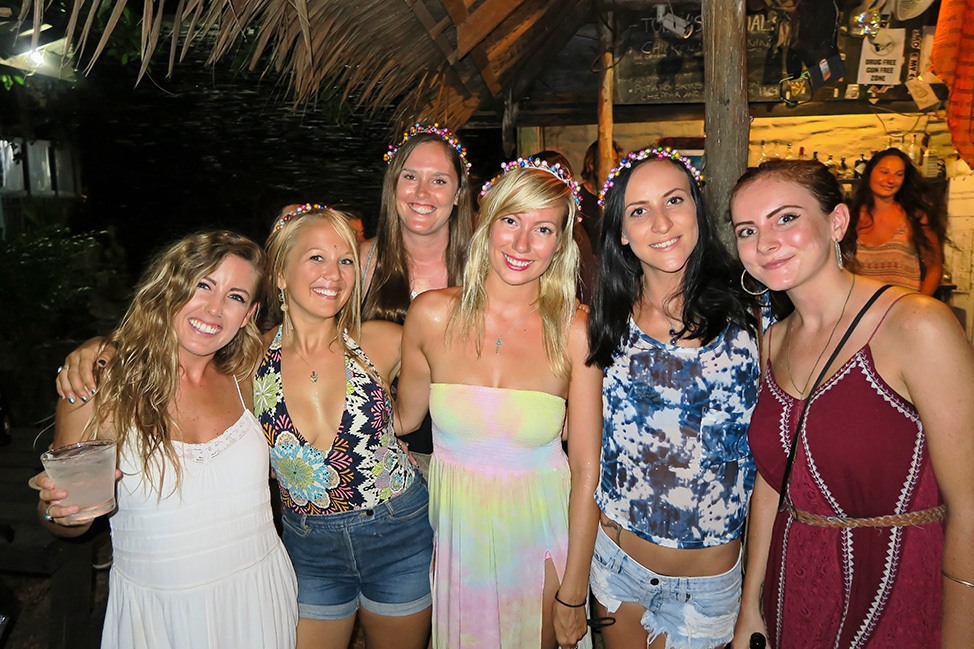 I loved seeing the looks on everyone’s faces when they saw the festival grounds for the first time! There were still a few acts to go before the headliners, so we spent that time running around, nomming on delicious food and drinks, and exploring the grounds.

For Koh Tao, it was a big deal how on point all the design was. The tropical hipster vibes were real, and I wanted all the swag. In addition to the usual hats and t-shirts they were also selling branded bamboo spoons and forks, and the cutest steel water bottles I ever did see (I still take mine everywhere!)

And they weren’t kidding about it being eco — they used reusable bamboo cups instead of plastic, used banana leaf and bamboo serving plates instead of styrofoam, had water refill stations instead of bottled water for sale, had clearly marked trash and recycling, and even built composting toilets. I can’t emphasize how big of a deal that is for Thailand!

And then Arrested Development came on, and we all lost it. Their energy onstage was insane, and I can think of few concert moments more euphoric than when “Every Day People” came on. 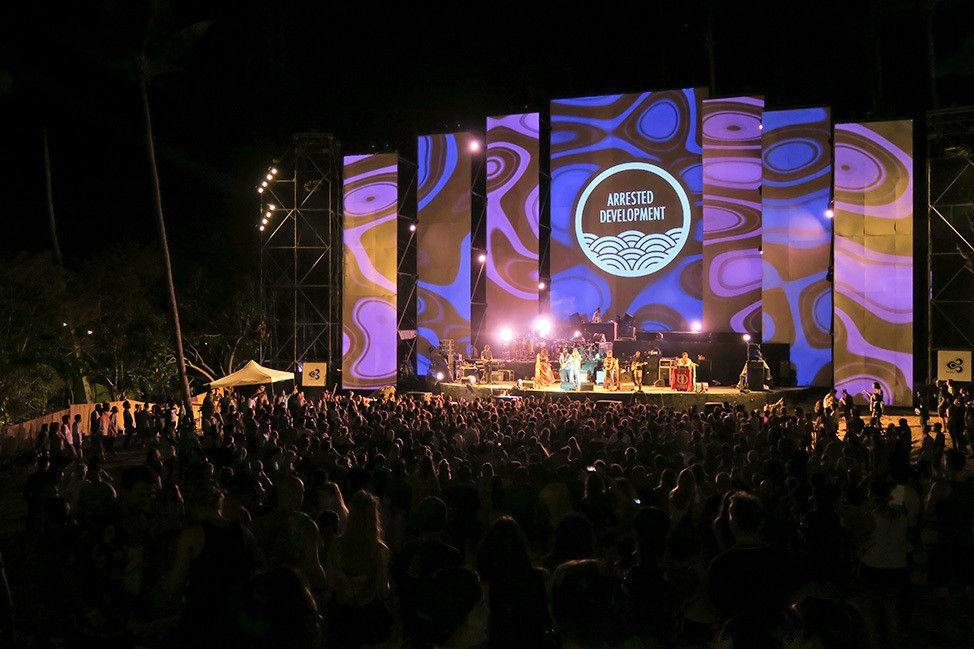 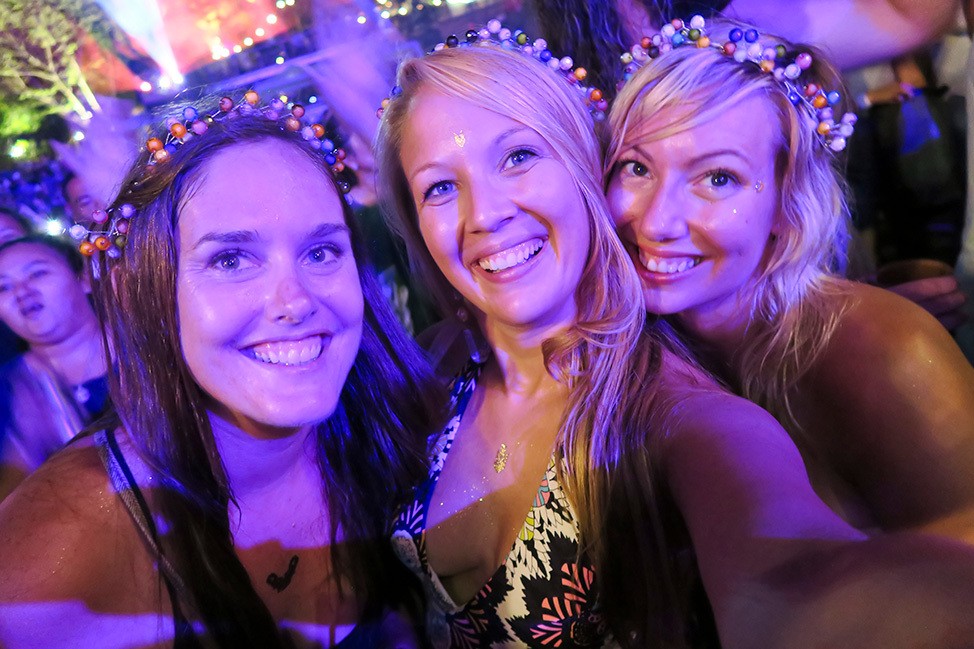 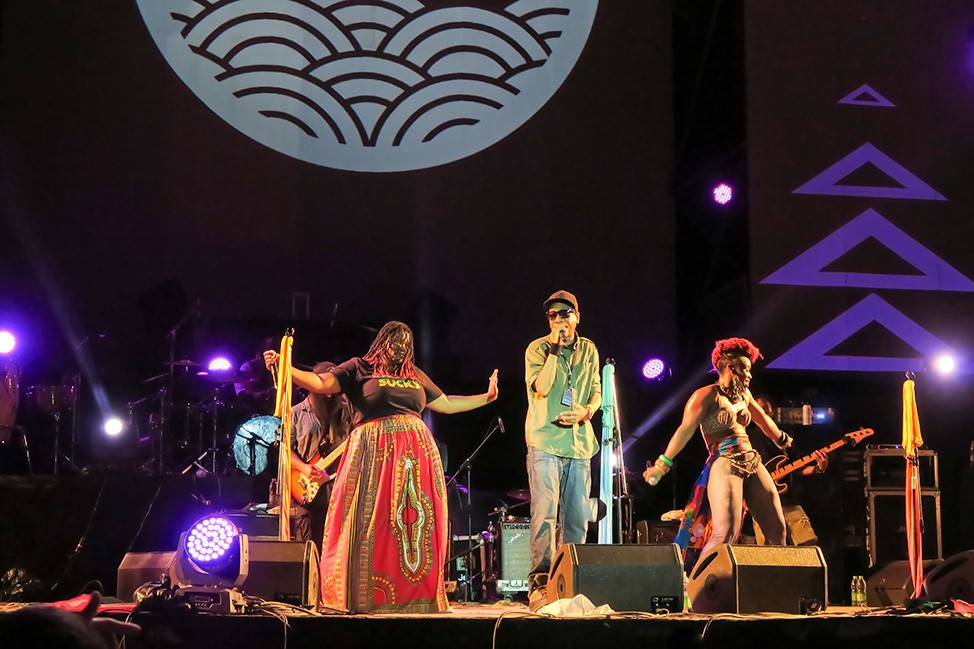 Of course, holding an elaborate, large scale event on a small, remote island in Thailand does present challenges. First, with Tao Festival, there was the naming drama; the fact that there’s an annual local festival called Koh Tao Festival, a source of much confusion and hand wringing upon the announcement of the name. (Believe it or not, Koh Tao has a ton of local events and holidays that we celebrate with gusto throughout the year!)

Next, there was the weather. There was torrential rain a few days before the festival, leading the organizers to cancel the first night of the festival and tack it on to the back end, causing some understandable confusion. 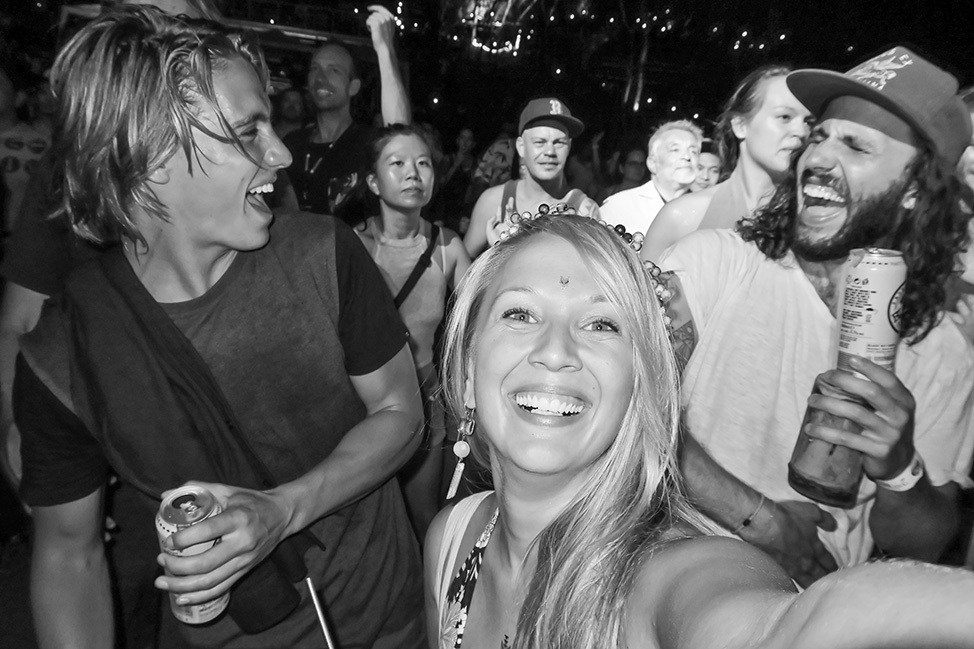 Finally, there were the logistics. Early renditions I saw of the festival grounds showed camping areas, and I actually thought it would be a blast to have a little staycation and camp onsite, especially since getting home from the remote festival grounds after partying all night would be precarious, to say the least. The camping area never came to fruition, and transportation between the day and evening events is the number one area I’d implore festival organizers to overcome for future editions of the festivals.

You were on your own to get between Sairee and Sai Nuan, and then at the base of the “bad road” to Sai Nuan, free share taxis continued the journey (it’s a road I’ve never tackled myself and don’t plan to!). Sadly, transportation on Koh Tao is always an issue — taxis are unreasonably overpriced and don’t typically provide great service — and can make Sairee residents and visitors reluctant to venture far in the evening. 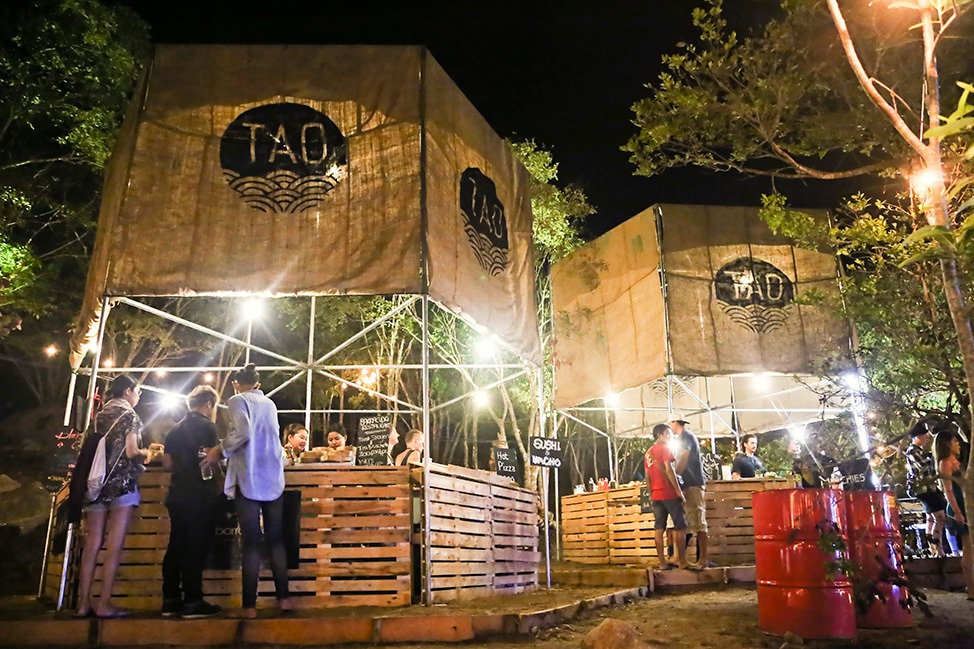 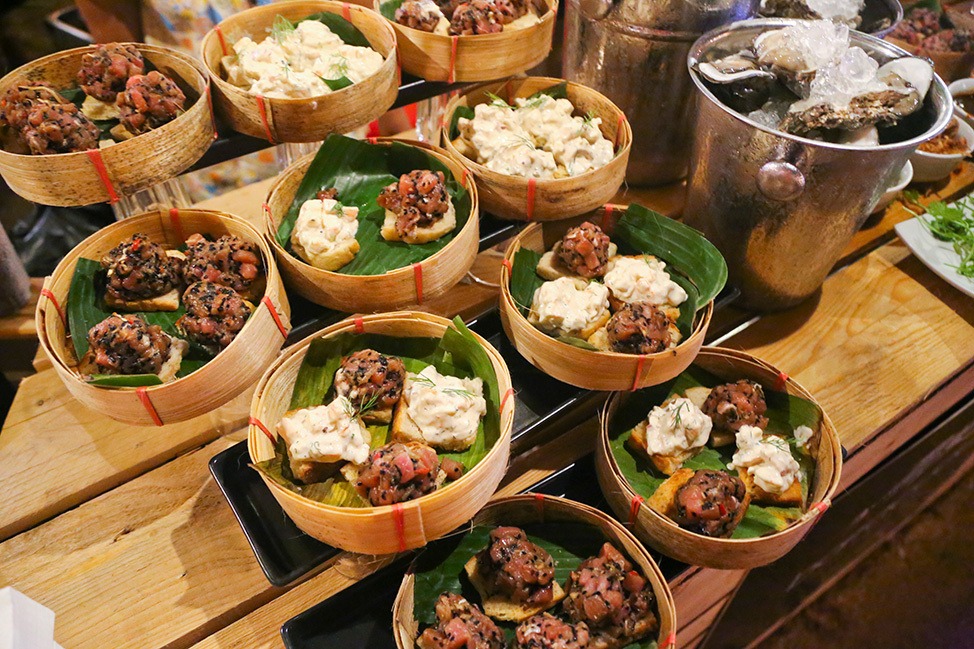 One area they really nailed it? The ecological aspect! I was so impressed with the recycling bins, the water refill stations, and mostly the plastic-free food service. The one notable exception were straws, which were a bit of a face palm moment. (I and many of my friends had our own steel versions, otherwise we would have gone without.) Skip straws next time, Tao Festival!

Having now run an event in Thailand myself, even on a much smaller scale, I have a new empathy for the obstacles they must have faced. 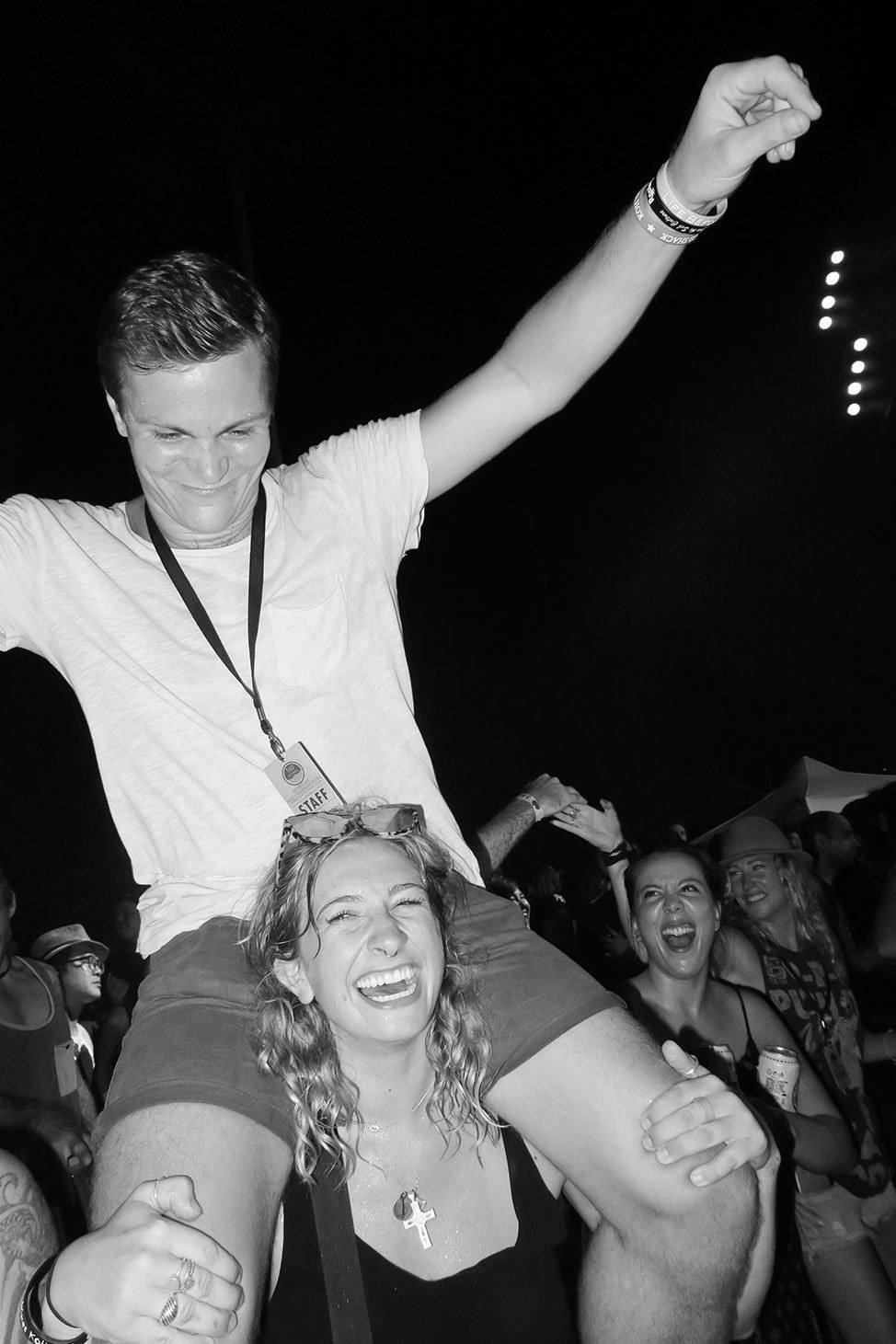 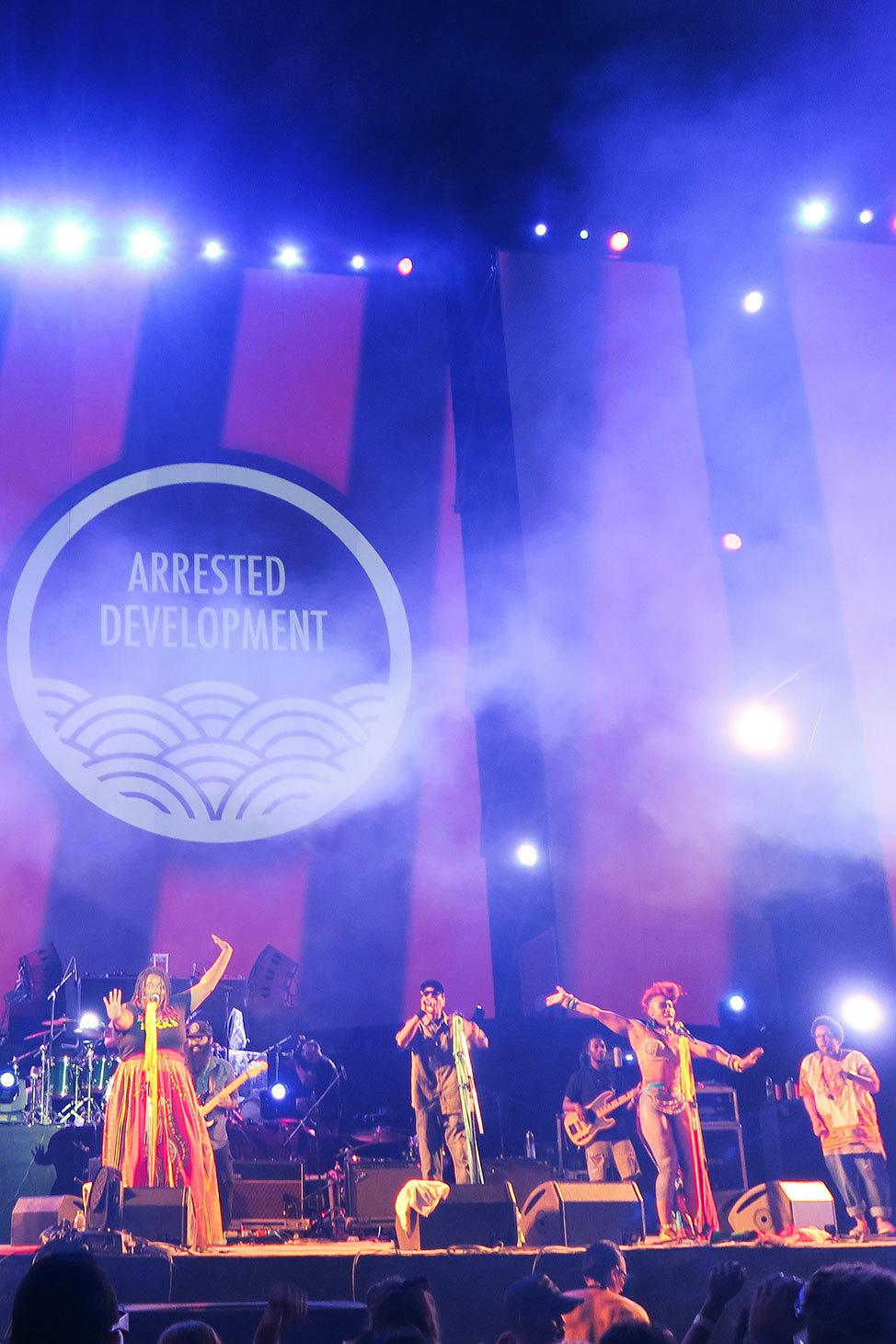 First time festival stumbles aside, hot dang, when I look at the photos I’m still kind of in shock that this all went down on tiny little Koh Tao! Rocking out to such incredible artists with such an elaborate stage and upscale level of light and sound production, surrounded by my closest friends was maximum fun, and doing it in this hidden tropical jungle made it feel like we’d stumbled upon a secret or were getting away with something.

This was the first event of its kind on Koh Tao — and I hope it won’t be the last. The 2018 edition was cancelled with less than three week’s notice, however organizers do claim a 2019 edition is coming — and I hope they are right! 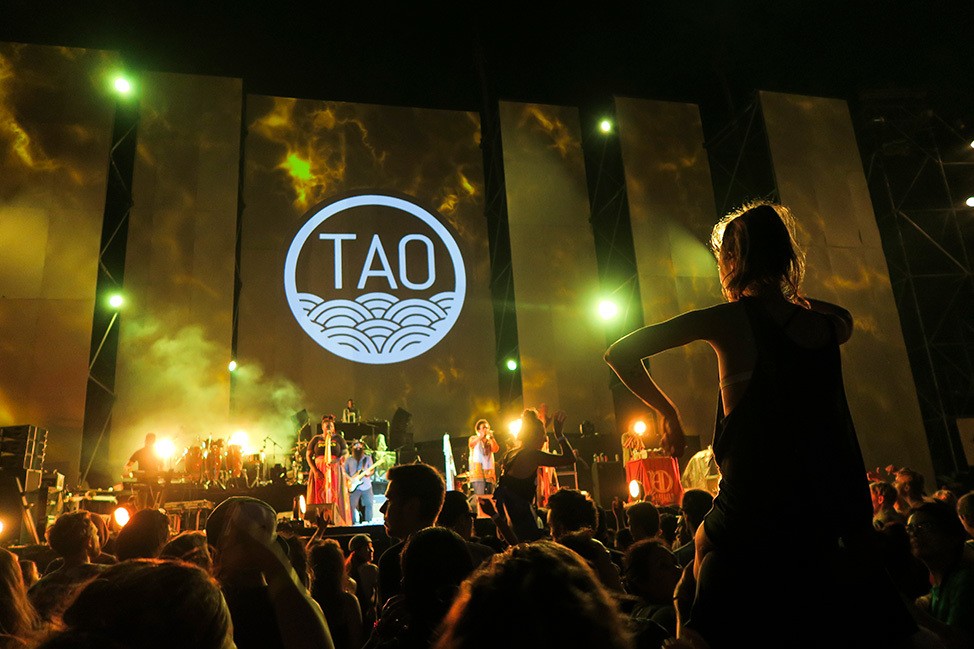 More Koh Tao blasts from the past coming soon!

Say “Seas”! A Review of the PADI Underwater Photographer Course

Diving Where Few Women Have Dived Before: Scuba Diving in the Dead Sea Life In The Lowest Place On Earth: Discovering The Dead Sea Tree
12 Comments...