Hang gliding in Rio de Janeiro was just one of those things I had to do. Back when I was a distracted student sketching maps of Brazil in the back of my math notebooks, I must have come across a guidebook or an early blog post that highlighted it as a top attraction — because while I can’t pinpoint where or when I first heard about it, hang gliding in Rio de Janeiro has been a must in my mind for as long as I can remember. 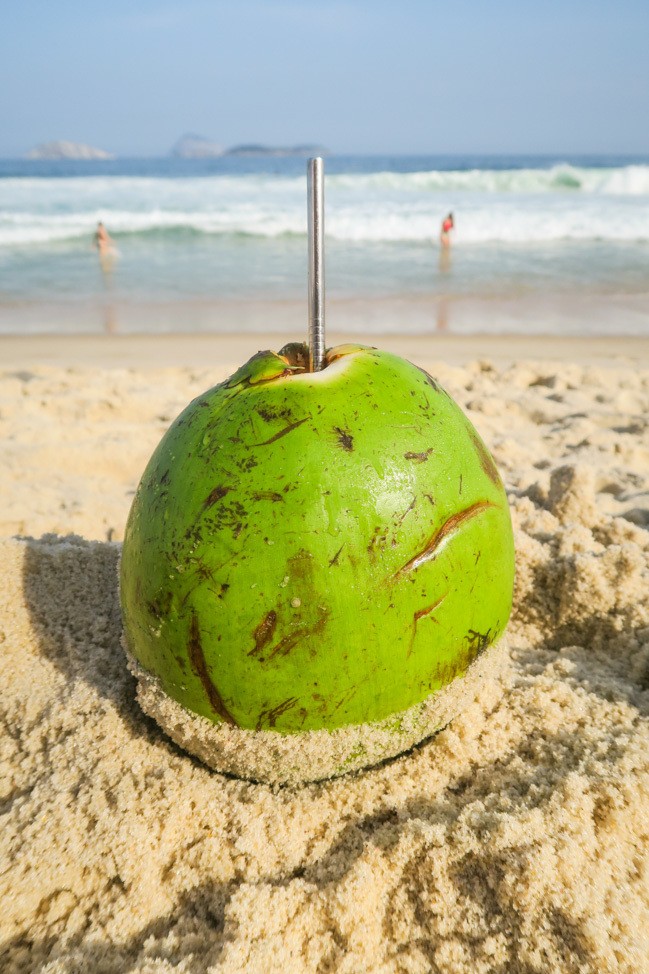 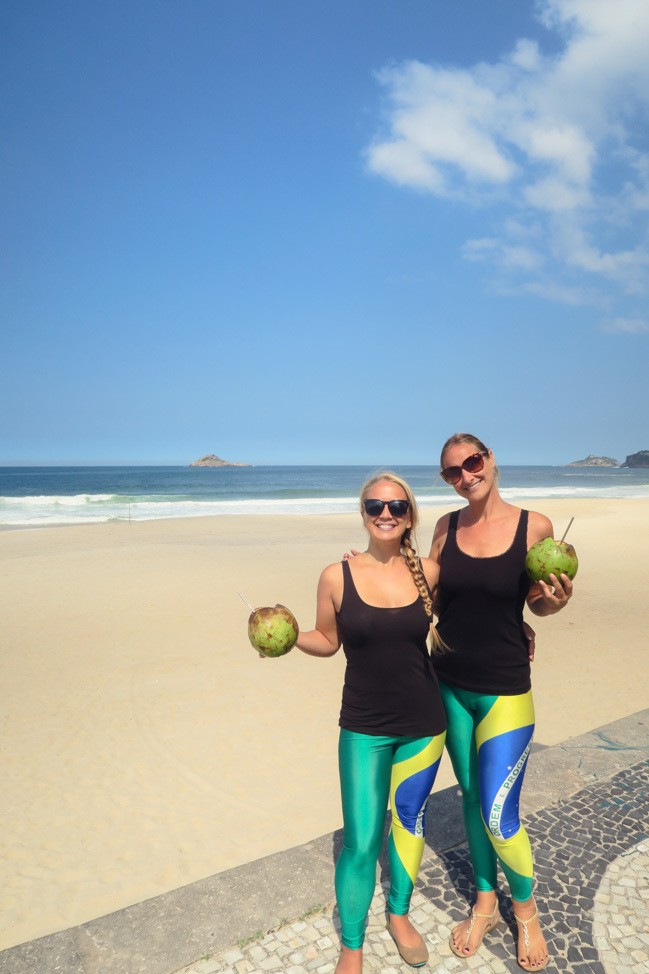 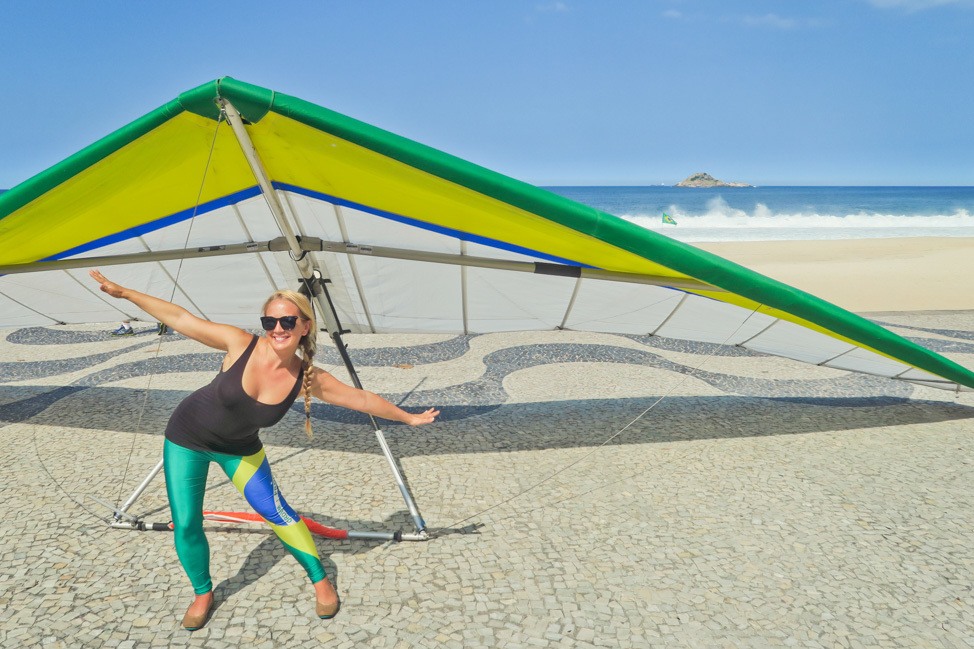 Lucky for me, Heather was enthusiastically onboard. She was also, with very little convincing, wiling to wear matching Brazilian flag leggings with me. And this is why I love Heather.

This wasn’t my first time testing gravity — I’ve been parasailing on Maui, hot air ballooning in Laos, sky diving on Oahu and helicoptering and prop-plane-ing all over the show. But it was my first time hang-gliding, and I have the nervous-yet-hilarious GoPro shots to prove it.

No, this is not the face of a girl who’s totally sold on the idea of running off a cliff. 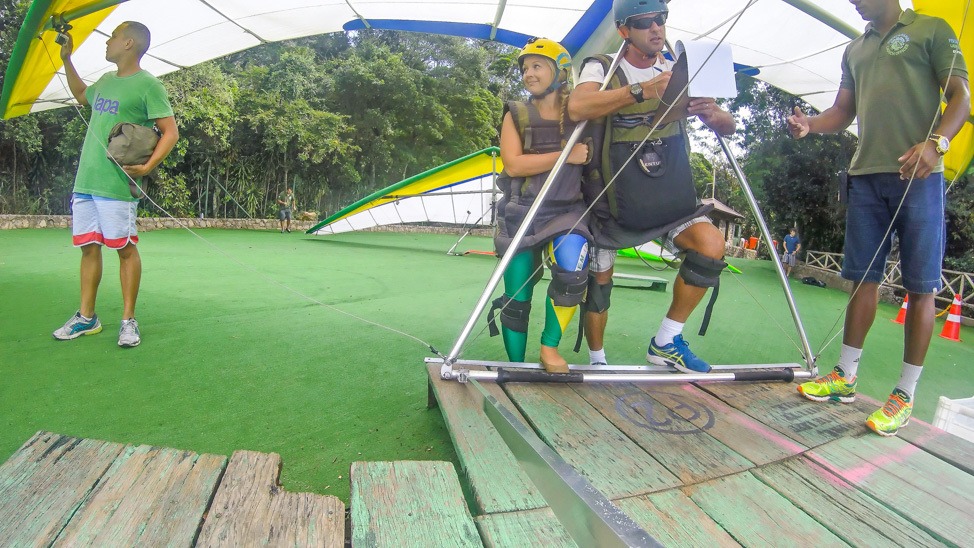 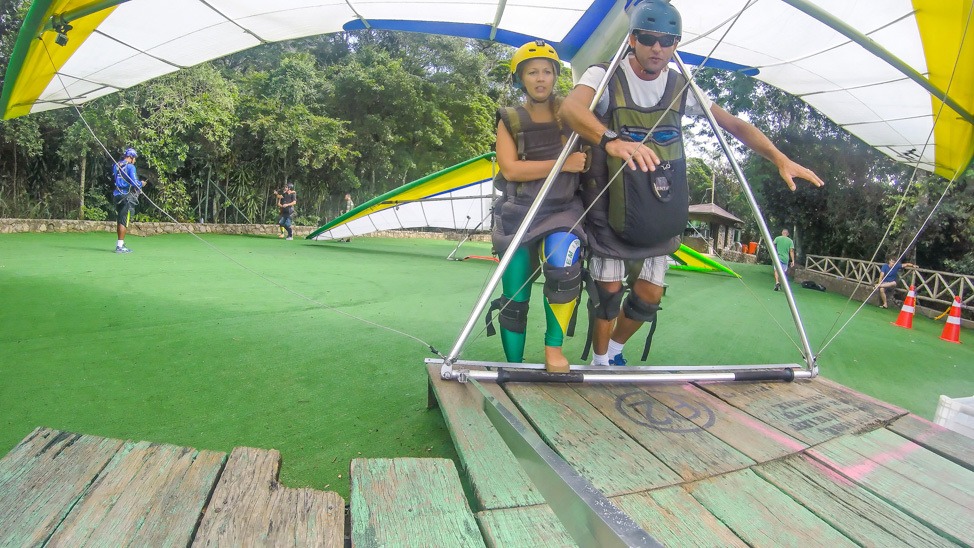 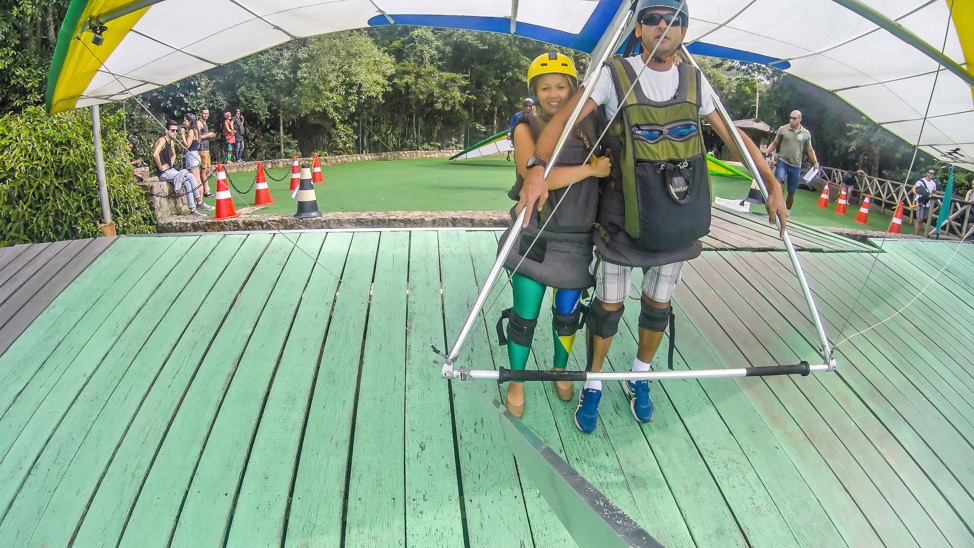 Little time had passed since we were whisked from our hostel doorstep to the white sand beaches of São Conrado, the epicenter of hang gliding in Rio de Janeiro. A strip of glide shops formed a neat row along the beach, and we were directed into the appropriate one to sign waivers, pay 30R (about $10USD) in fees, and get matched up with an instructor. Then we were back in the van, winding our way up to the launch point in Tijuca National Park, the largest urban forest in the world.

Although I was incredibly impressed with how organized, efficient, double-checked and safety-focused the whole affair was, the idea of flinging myself off a mountain was starting to seem suspect. Despite of, or perhaps because of, the expression on my face, I was the first one called forward to fly, and after receiving the world’s shortest briefing — which literally consisted of “keep running until you don’t feel the ground under your feet anymore” — I started to sprint.

And soon I couldn’t feel the ground any more. 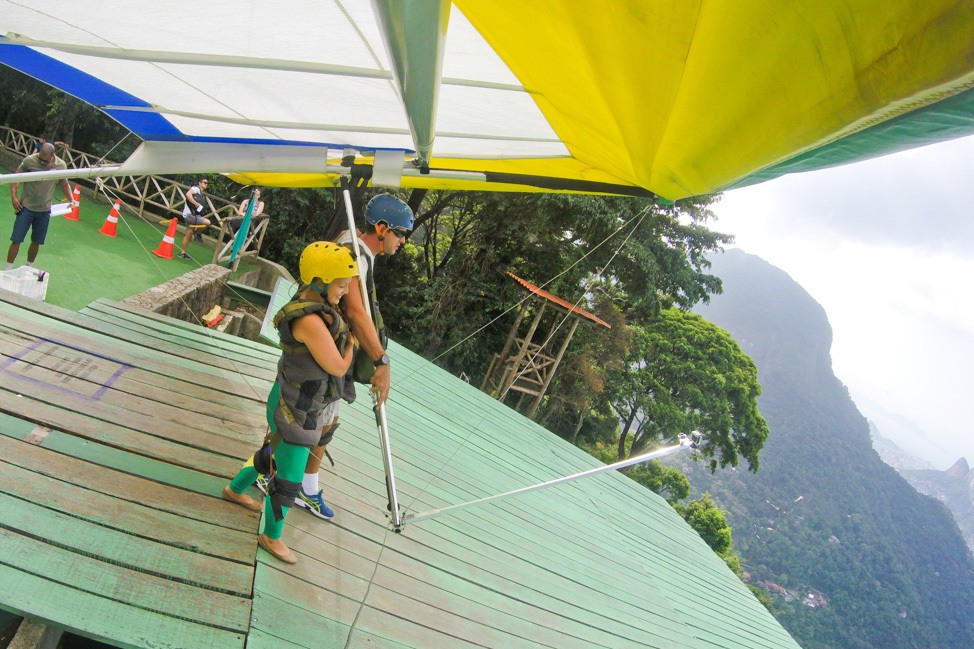 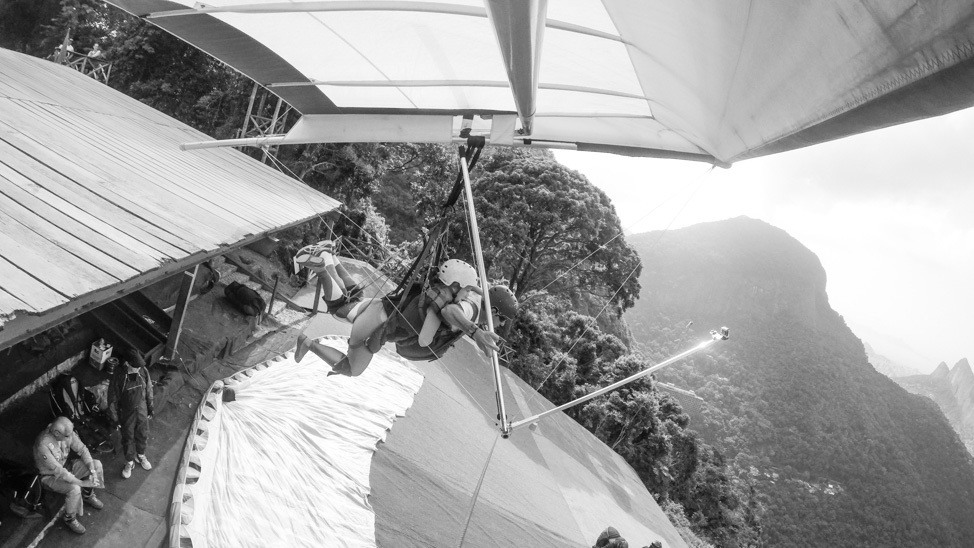 The adrenaline rush of the launch was overwhelming, but within moments my heart-rate returned to something resembling normal and I was struck how peaceful it was, up there among the clouds.

While I admired the view, my instructor expertly navigated us using the wind. That’s the beauty of flying tandem — you pretty much have your own private air chauffeur and you can just kick back and focus on making thumbs up signs and flashing peace fingers at the camera. (Why, Universe, why is must this be my default?) 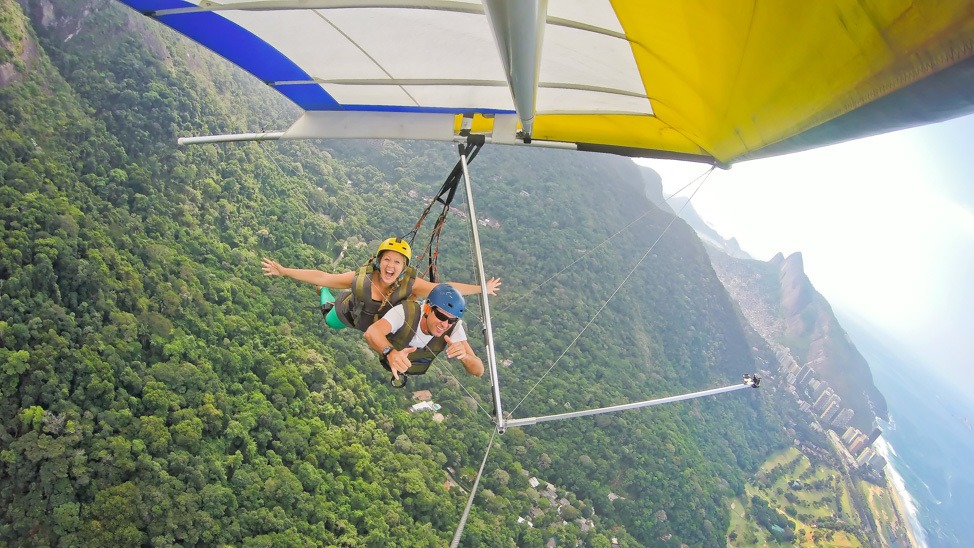 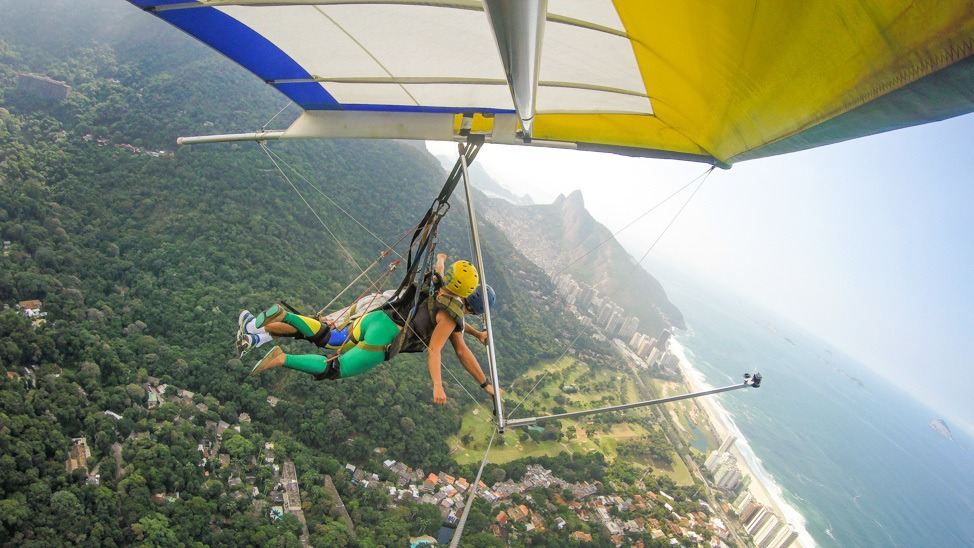 Rio de Janeiro has no shortage of incredible views, but these were particularly impressive. Not only could we make out our friend Christo Redentor in the distance, but we also had front row seats for Pão de Acuçar, the lush Mata Atlantica forest, and of course the white sands of several of the city’s most famous beaches.

We also had a poignant vantage point of Rio’s infamous gap between extreme poverty and opulent wealth. In one direction, we gazed at the infamous Rocinha Favela; in other, the ocean-front mansions of São Conrado. If you do want a voyeuristic look at the houses (and pools!) of Brazil’s rich and famous, you can’t ask for a better bird’s eye view. 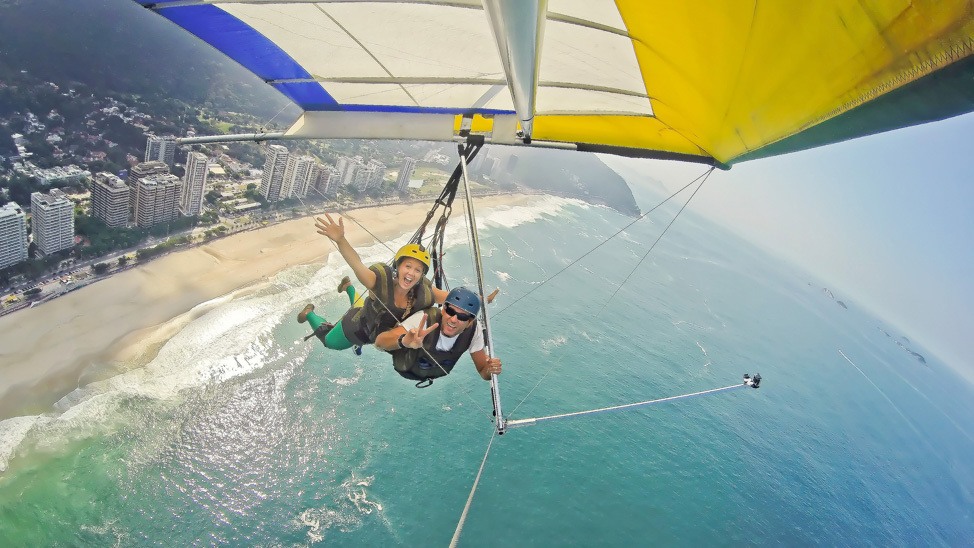 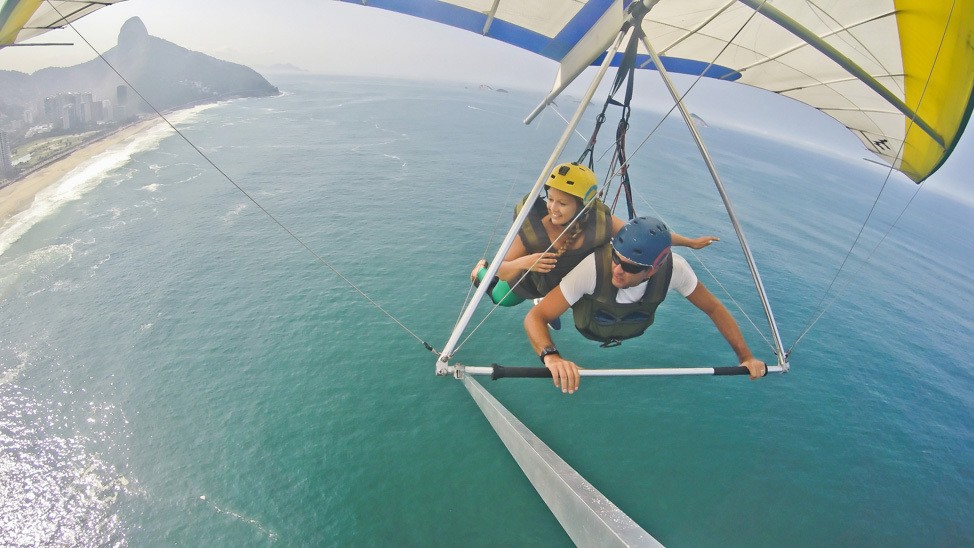 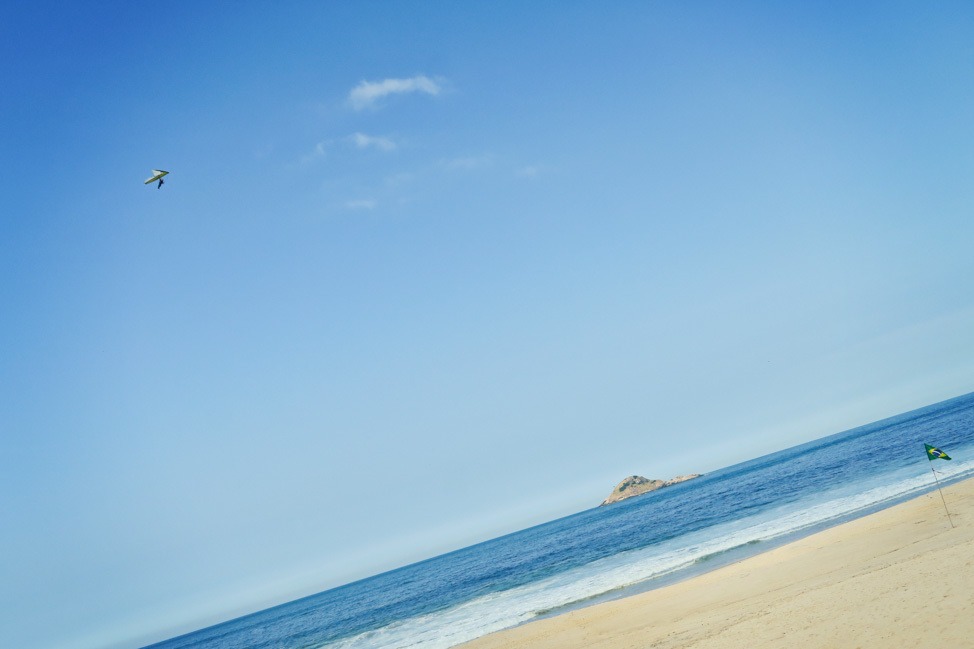 The final challenge? Landing. Again, on my part it involved little more than simply running till I was told not to. For an “adventure sport,” I was sure taking it easy up there. 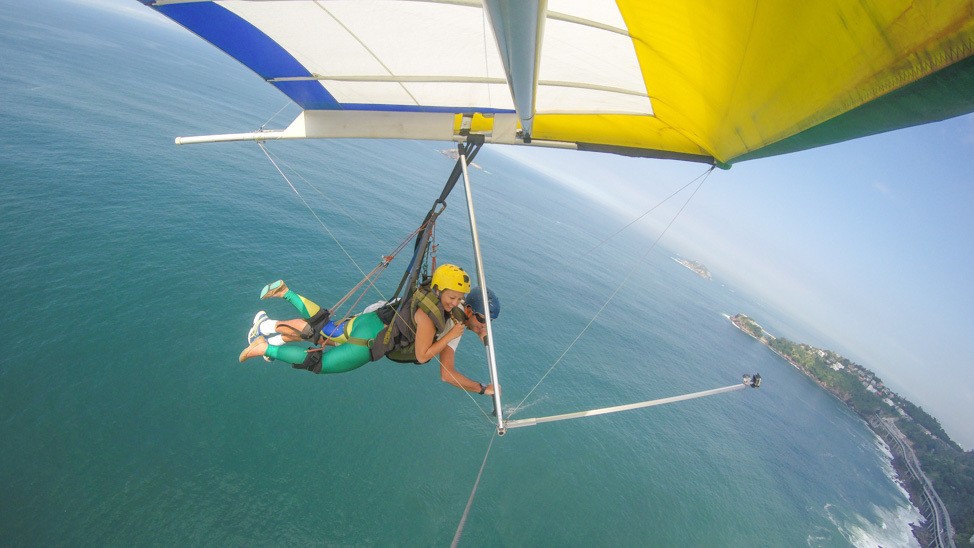 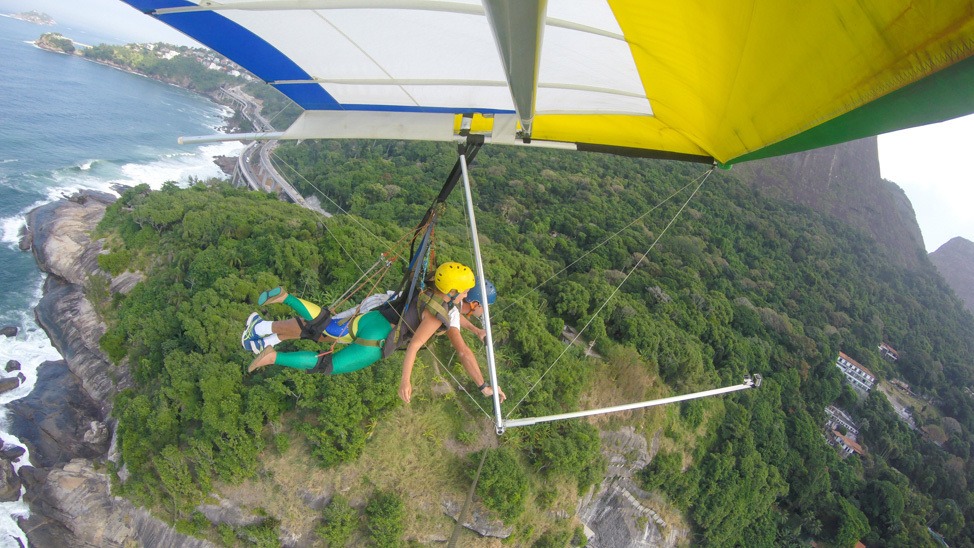 And then we were back on land — or sand, rather. While my instructor took care of our harnesses and rig, I ordered up two fresh coconuts and waited to cheer Heather’s landing on. 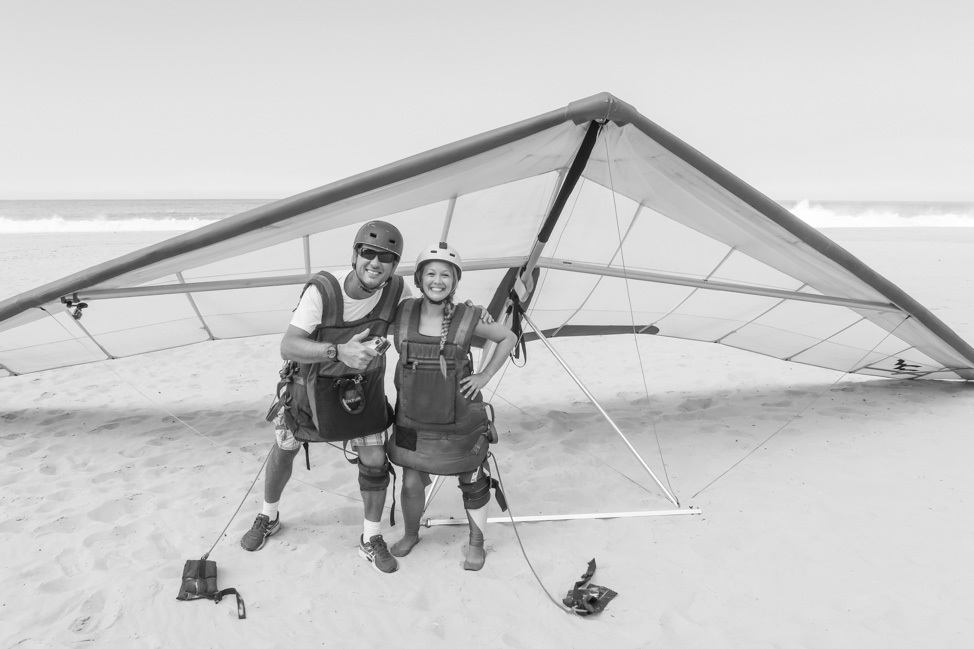 She rocked it! Once reunited, we giddily recounted every moment of our experiences, and gave ourselves some serious high-fives for checking another adrenaline rush off our travel wish lists.

Unfortunately, we soon encountered our one and only complaint about the tour we’d booked. We carefully selected a package that said “photos and videos included,” and technically, there were some photos and videos included, our instructors explained to us while we perfected our mutual RBFs. The gliders are set up with two GoPros, and the included photos and video clips are from only the front camera. The side camera shots will run you an extra 100R (around $32USD). Also, they give them to you on a DVD unless you pony up 20R (around $7 USD) extra for a USB or memory card.

Considering we were traveling with approximately twenty-seven USB sticks and memory cards between us, we were pretty annoyed we hadn’t been given a heads up in order to bring our own. And we were extremely irritated that the photography exclusions weren’t clear when we booked. I begrudgingly paid for the extra photos, which to his credit my instructor gave to me on memory card that he didn’t charge me for, in order to smooth out the situation. Considering it was an expensive experience, being nickeled-and-dimed at the end didn’t feel good. It definitely left a bitter taste in our mouths to feel like we’d been mislead, so if you’re heading to Rio and booking a hang gliding package, just clarify exactly what’s included before hand. 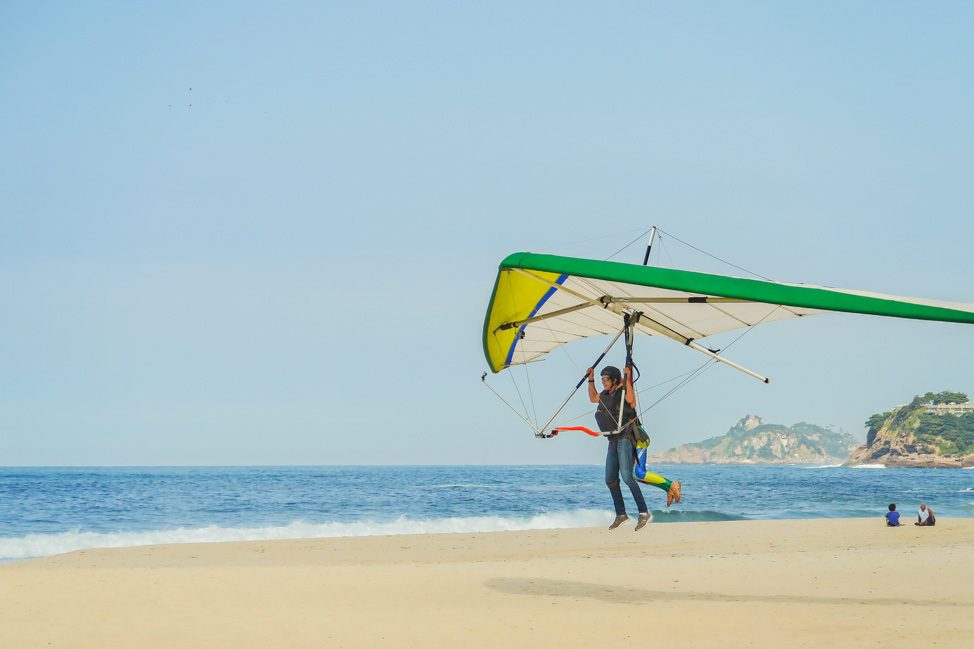 Three hours later, we were back where we started on the steps of our hostel. Our photo frustrations aside, I loved this experience and would recommend our tour package. The ease of transportation (our driver offered to drop us at Ipanema or Copacabana beaches if we preferred, which was lovely), the efficiency with which we got up and off the mountain and the high safety standards all left us impressed.

After so many years of anticipation, and so many other amazing adrenaline-inducing experiences in between, it would have been easy to be let down by this one. But nope, hang gliding in Rio de Janeiro lived up to every math class I ever daydreamed about it through. 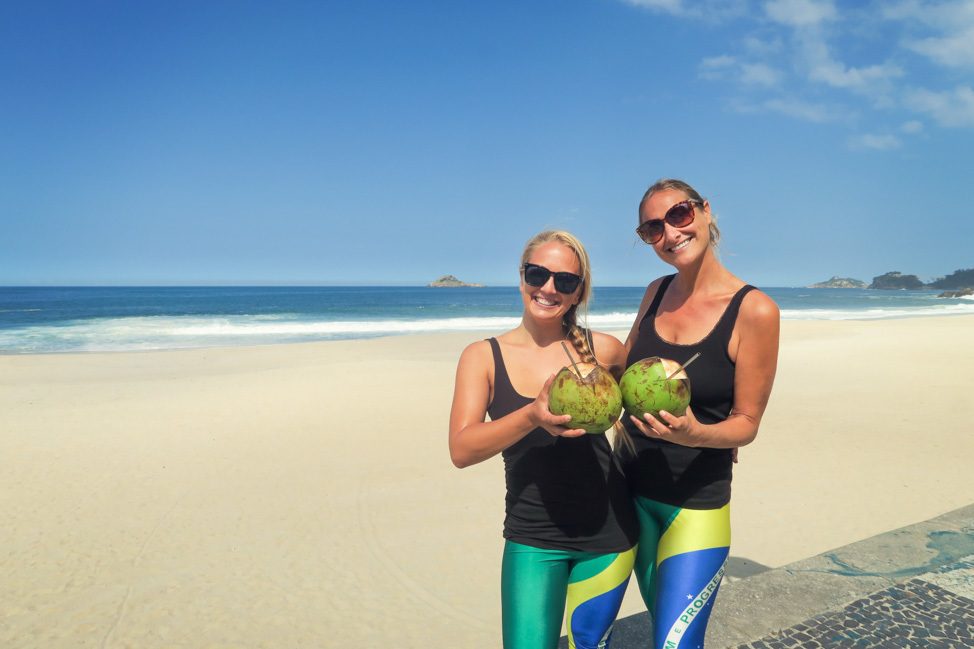 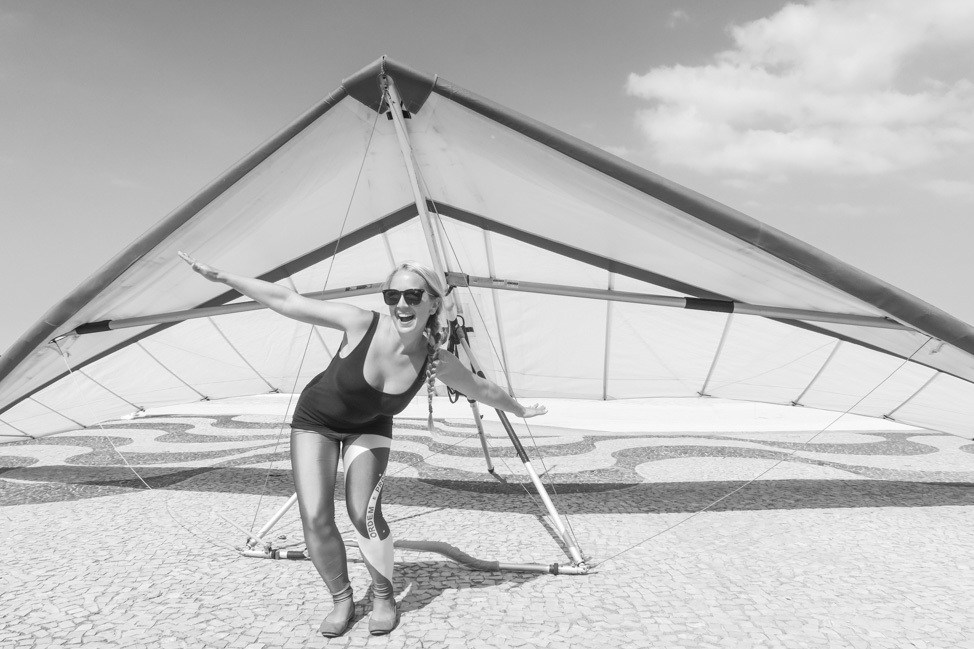 As I told Heather that morning… it’s a beautiful day to leap off a cliff!

I am a member of the Viator Ambassador initiative and participated in this tour as part of that program. This post contains affiliate links for which I earn a small percentage of any sale made at absolutely no cost to you. Thank you for supporting Alex in Wanderland!

Inside the Tents at Tomorrowland Brasil’s Dreamville

Father’s Day from Above: A Helicopter Ride over Los Angeles

How to Work With Brands 101 Car Rentals for Introverts: A Review of the Avis Now App
32 Comments...