The Great Escape: Months 26 and 27 Roundup

This two month period brought me via whirlwind from Bali to Burning Man, with a blissed out stretch of stillness in Gili Trawangan rounding out the middle. Significantly, this roundup marks the end of my Southeast Asia chapter — at least for the moment. For the first time in a long time, I have no concrete plans to return to the region that first ignited my love for long term travel. But I think we all know I’ll be back… right? 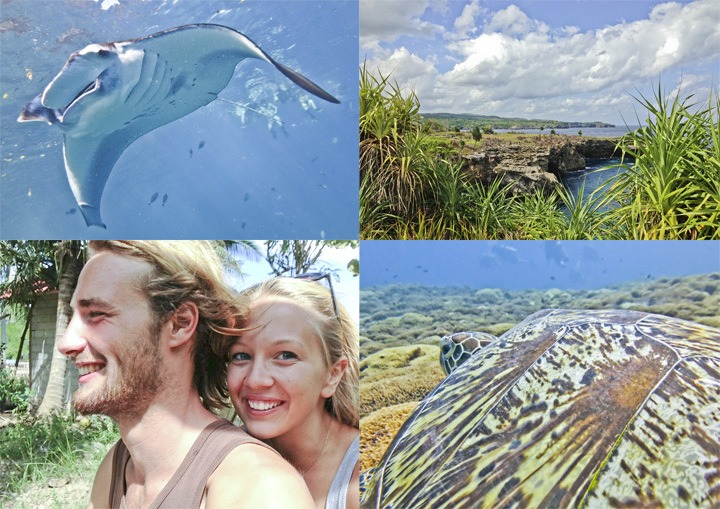 • Sleeping off my jetlag with a lazy few days in Nusa Lembongan. Anders’ parents treated us to some seriously sweet digs, a nice transition between a cushy month at home and the frustrating accommodation search that awaited us on Gili Trawangan. When I was finally able to wake from my apparent perma-nap, we zipped around Nusa Cenigan on scooters, another highlight from my time in Indonesia.

• Launching a new series. I’ve had an increasing number of packing post requests over time, and it was high time to finally fulfill them! I started small, with a post on toiletries, followed by a master list of my dive gear. Those were some of my favorite posts of the month to write!

• Sitting still for a month. I’m on the move way too often these days. Paying a month of rent, catching up on work, letting my wallet cool off and developing a mini routine felt like a gift from the scheduling Gods.

• Photographing a shark release. I felt privileged both to have such a unique opportunity and to have friends capable of making such cool things happen.

• Watching the sun set over Bali, Lombok, and The Gilis from the crater rim of Mount Rinjani after day one of our three day trek. I still wasn’t entirely sure what I had gotten myself into, but that view made the pain of the day’s 8,665 foot ascent worthwhile.

• Your responses to my summit turnaround post. They really meant the world to me. 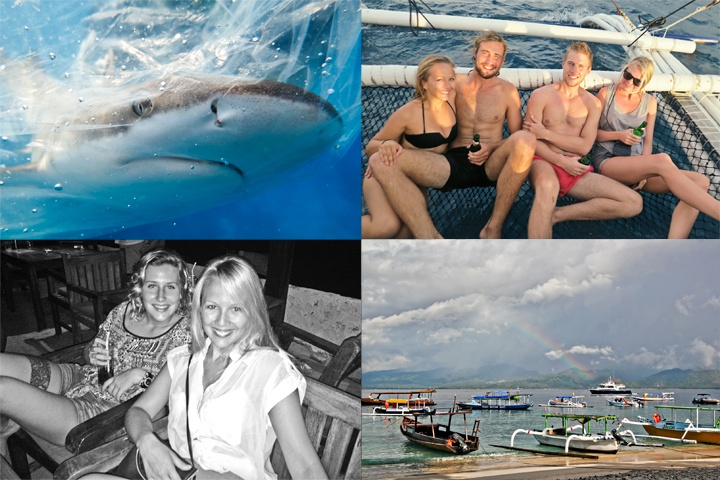 • Winning big at travel hacking! I wrapped up my SPG AMEX tour of Southeast Asia with a decadent weekend at The Sheraton in Kuta Beach. I still think about the in-house Feast buffet — the unrivaled culinary highlight of my breakfast career.

• Watching the pristine jungle float by while on assignment with Viator. Sometimes I really love my job.

• Having breakfast alongside our private plunge pool. Capping off my time in Indonesia in five star luxury was quite the experience. Living with spotty electricity and showing in cold saltwater had its charms, but I’m glad I got to see the other side of Indonesia’s accommodation offerings.

• Snagging matching Alex and Tucker Bintang t-shirts in Kuta. Yes, I like to match my dog. What of it?

• Working with TripFilms to product two videos about What to Do on Gili Trawangan. There were incredibly stressful moments involved but also fun ones as Anders and I ran around the island shooting, and I love the finished product.

• Driving through the gates of Black Rock City. Burning Man is basically an entire week of alternating highlights beyond what you could ever dream of and lowlights reminiscent of nightmares. But there’s nothing quite like a bucket list dream fulfilled.

• Special Playa moments. Whether is was watching a Playa wedding, singing along to the Broadway-worthy show at Ashram Gallactica, sitting at The Man at sunset as a bunny parade descended, or putting the perfect finishing touch on a thrown-together costume, my week at Burning Man was filled with eccentric fun.

• Learning about the Ten Principles. Sure, I had read about them before… but there’s nothing like having your bike fixed by a hug-and-wrench-wielding stranger to really make you understand the principle of Gifting.

• Pre- and post-burn time with friends. I loved our buffer days on each end of the week. Whether we were blasting Miley Cyrus and jumping on the beds of The Peppermill or wandering the strip malls of Sacramento looking for a restaurant open on Labor Day, I cherished this silly time with my nearest and dearest. 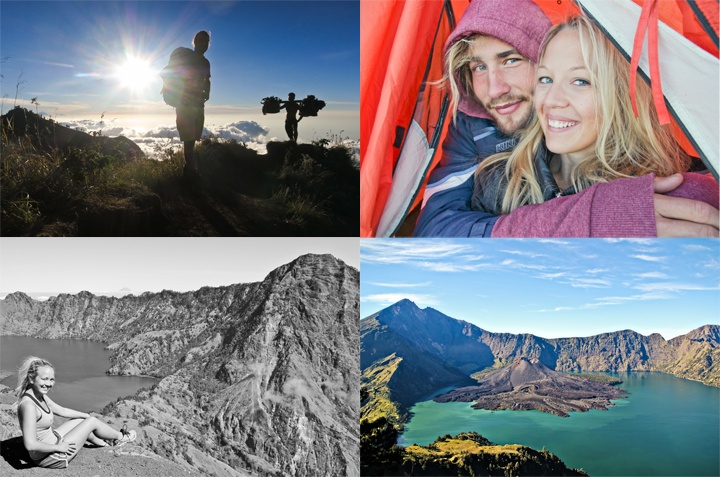 I’ve been thinking of changing the name of this category. Lowlights just seems so negative, don’t you think? More so than lowlights, this section is filled more with learning experiences, minor hassles and moments that were initially disappointing but turned out to be enlightening.

• The inevitable minor letdown of returning to a place I had on a pedestal. This certainly wasn’t the first time I learned the pitfalls of investing myself in a transient community, but it doesn’t make it any easier of a lesson to learn (and learn, and learn, and learn again.) Did I have the same experience in Gili Trawangan when I returned as I had the first time? No. Am I glad I went back anyway? Yes.

• Apartment hunting in Gili Trawangan. We had a nightmare five days (or was it more?) switching rooms every night as we tried to find a reasonably priced, reasonably wifi-ed bungalow. The selection of places with internet is tiny, and the high season meant it was smaller and pricier than ever. Thank God for Anders’ patience, as I was nearly spinning off the planet.

• Not really doing much diving. When I left Gili the first time, I was under the impression that I was returning to a position as a divemaster. Yet when I returned, there wasn’t work for me. Shame, as I was looking forward to cementing my certification with some real-world, confidence-boosting experience. It turned out fine as I had one of my busiest months of blogging and writing ever, but had I really been depending on that work it would have been a huge blow.

• Not summiting Rinjani. Though as I said above, writing about the experience was very cathartic, as were your comments.

• Seeing the garbage on the Rinjani trek. It was difficult to stomach the negative impact tourism is having on this place of such immense natural beauty. There were other frustrations involved with the trip — lack of communication with our guide, stress over tipping — but this one loomed the largest.

• The day after returning from Rinjani. I’m not exaggerating when I say it was one of the worst 24 hour periods in all my travels. After arriving home late at night after three days of brutal trekking, I have never been so excited for a shower — despite the fact that ours was one temperature (cold) and not exactly fresh (it was brackish water). So imagine the look on my face when I stood under the shower head (literally a hose sticking out of the wall), turned the dial, and nothing happened. Then the electricity went out. Four hours later, Anders and I were seemingly racing each other to the brink of homicide as the wrench-wielding guest house employees wandered in and out of the bathroom giggling. Finally we were able to shower, but the power never returned, and as the fan was our only defense from mosquitoes, let’s just say it was not a restful night. Then, then, the next morning I went to plug in my laptop to catch up on work and found the cord was completely destroyed. I am not ashamed to say I fell on the floor into the fetal position and sobbed like a toddler. Buying a new one would mean a two-day return journey to Bali and back, and a huge waste of cash on ferries, accommodation, etc. In the end, it was an Indonesian miracle — Chai, the fix-anything engineer at my dive school, managed to solder the cord back together well enough that it stuck in place until I could buy a replacement back home. 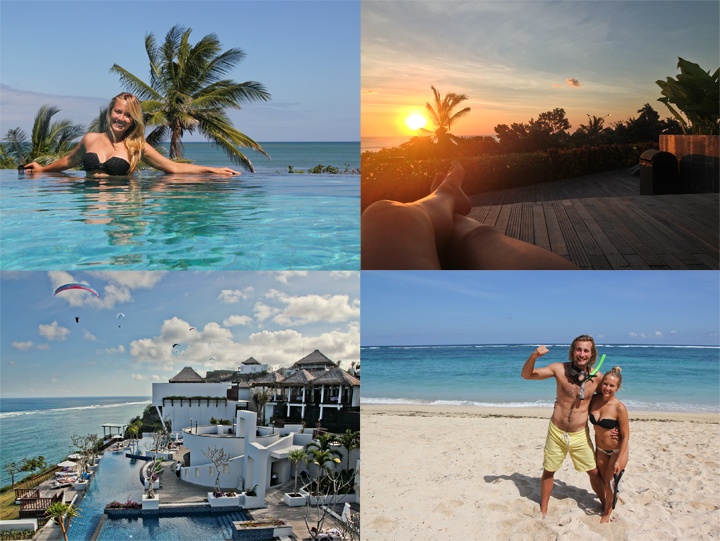 • Peru planning blues. Normally I love travel planning — I enjoy almost every step of the process. Because we needed to lock in Inca Trail reservations and my travel buddy Zoe needed to request time off work, I did a huge bulk of the itinerary planning from Indonesia. Gili Trawangan wifi, plus juggling my many work partnerships, made one of my usual favorite things into a fairly stressful experience (though it is all paying off now!).

• Traveling Indonesia during Ramadan. Just as I found traveling through The Philippines during Easter to be more hassle than holy, I didn’t enjoy much about the Ramadan experience. My requests to join the dive shop staff to mosque were met with confusion and discomfort. Warungs shuttered for a month of fasting, meaning no more cheap and yummy local lunches. The mosque calls that normally started around 5am went off around 2am and reached new levels of fervor and volume. Nightlife was quiet — not really devastating in itself, except that on an island where everyone lives in one-room shacks, bars are really the only option for after work gathering and social time among friends. These downsides were offset by one positive experience, being asked to join the staff at Hook’s Bungalows, where I lived, to break fast for Edel Al-Fitr.

• Rushing to Burning Man. Burning Man requires a huge amount of physical and mental preparation — more than I had anticipated. I rushed home from Indonesia and in the space of a week had to unpack, repack, and fulfill other home time obligations like popping to New Jersey for bridesmaid duties. Next time, I’ll take more time.

• Struggling with unexpected disappointments at Burning Man. They are too complex to recap eloquently, so luckily I devoted 1,000+ words to the subject here.

This was a funny time, budget wise. Month 25 was one of my most profitable months ever, while Month 24 had me tossing and turning at night fretting over my bank statements. They evened each other out and I ended up with more or less the exact same amount in my accounts at the beginning and end of this period.

I wrote detailed posts about the affordable cost of living in Gili Trawangan and the splurge that is Burning Man. 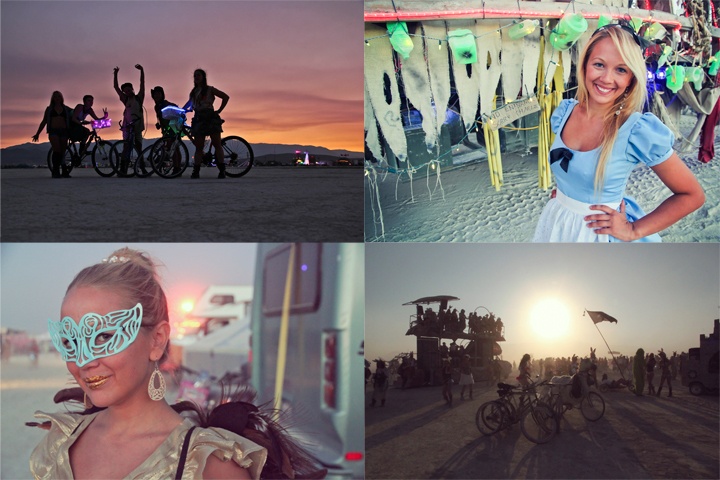 This was a low point on the roller coaster ride that is my fit living journey. I totally neglected myself in Indonesia, which was painfully obvious when I was struggling up and down Gunung Rinjani. As a result, I felt self-conscious about my appearance at Burning Man, where there is plenty of flesh on display. Both were good wake up calls.

Post Burning Man, I returned to the East Coast for a month of decompression and gearing up for South America.

Thanks for coming along for the ride… it wouldn’t be the same without ya.

The Holiday Season at Home

The Crumbling Charms of Iquitos Photo of the Week 124
12 Comments...